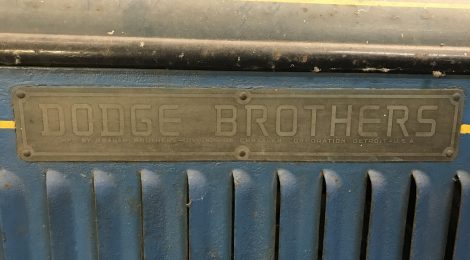 As usual, here is a bit of a roundup of news from the transport and engineering team… I’ve also included some words from Andrew Neale, owner of Edward Sholto, which is now on static display in the Colliery Engine Works. This eruditely explains the reasoning for reassembling the locomotive rather than carrying out extensive structural boiler repairs, work which was discovered to be necessary once the boiler was stripped for repairs two years ago. However, we start with some news of a locomotive that we very much hope will return to steam in the next two years, and then end the post with the arrival of a bus restoration project in the workshops…

We are delighted to announce that the Narrow Gauge Railway Museum Trust, owners of 721, have agreed to our proposals for restoration, to working condition, of the 1901-built locomotive.

The Trustees have approved a proposal that will see the locomotive further dismantled at Beamish, with a mechanical overhaul and preparations for repairs to the boiler to be undertaken by engineering apprentice, Zoe Hart and her mentors Don Cook and Matthew Ellis. Assistance will also be provided by other members of the engineering team, both staff and volunteer.

Work began in late 2019 to dismantle the tiny two-foot gauge locomotive, to establish whether or not restoration would be feasible. At that stage it was all reversible work, pending the provision of a report and proposal to the NGRMT. With that work completed and a report made (and further work approved), work has now commenced on more destructive dismantling. The current priority is to remove the front tubeplate and tubes. An initial survey has been carried out by our boiler inspector and we will shortly place this boiler formally onto our insurance schedule to monitor the repairs.

Once the boiler dismantling has been carried out and repair work fully established, the dismantling of the frames and coupled wheels will commence. 721 is a well-tank, and at some point the front of the tank casting was punctured. This acts as a frame stretcher, between the cylinders, and so will not be straightforward to remove

We are confident the tank casting is repairable, however, having had other castings in high-stress areas repaired on other objects at Beamish (including the damaged pedestal bracket on the Savage Gallopers centre engine). This work was carried out by Cast Iron Welding Services.

No timescale has been set for a return to steam as work will progress according to the availability of resources. At present Puffing Billy is receiving the engineering team’s attention, before a start is made on Steam Elephant and continuation of work on Gateshead 10. The same team has just completed the work on the aforementioned centre engine, which is now back in situ at the Fairground.

The 1909 “Slate Quarry Hunslet” 0-4-0ST EDWARD SHOLTO has been on long term loan to Beamish since 2012. Exported from Penrhyn Slate quarry to Canada in 1961 it was rescued from many years of dereliction in Chicago in 2004 by Andrew Neale. After safe storage in the USA for 18 months it was shipped home in June 2006 and following a lengthy restoration by a team of skilled volunteers it was returned to steam in March 2010. For the next two years there was a programme of visiting various heritage railways after which it was placed on long term loan to Beamish Museum. A key reason for owners Andrew and Margaret Neale decision to send it to Beamish was that here it could operate on the museum’s short industrial railway under conditions most approximating to its working life at Penrhyn slate quarry, where it spent  all its life shunting wagons of slate rock along the various galleries in this enormous quarry.

During the locomotive’s restoration it had been realised that the locomotive remained in a uniquely original condition that distinguishes it from almost every other preserved locomotive in the country. Due partly to the very soft nature of the Welsh mountain water which it used together with the careful nature of the maintenance it received all its working life EDWARD SHOLTO retains in it today a high percentage of the material it was built with. Not only is the boiler the original one, although it was necessary to fit a new front tube plate during the restoration but the copper firebox is also that it was built with, only receiving careful repairs in 1938 and 2009. Again in contrast to most similar Hunslet locomotives it contains only a minimal number of parts taken from its sister locomotives.

It has always been the aim of its owners to maintain this unique originality and not modify it for passenger use as most of its sister locomotives have been. This approach has been enthusiastically supported by everyone at Beamish who help care for EDWARD SHOLTO. Unfortunately having been stopped for minor boiler repairs in 2017 further examination of the stripped down boiler has shown that it has now worn to the extent where further repairs to both boiler and firebox to keep it in working order are impossible.

For the foreseeable future therefore it has been agreed that the locomotive will be placed on static display at Beamish thus preserving its uniquely original status. It is possible that at some time in the future if funding should become available that another rebuild to working order will be considered. In the meantime however on the basis that one can only destroy originality once it is being conserved in its original state so that those interested can see a Hunslet locomotive exactly as it was built and not as altered by a succession of owners over the years.

The Dodge has arrived in the RHEC for a start on assessing its potential for restoration. One of the first jobs to do will be assess it for separating the body from the chassis so that a full mechanical assessment can be made.