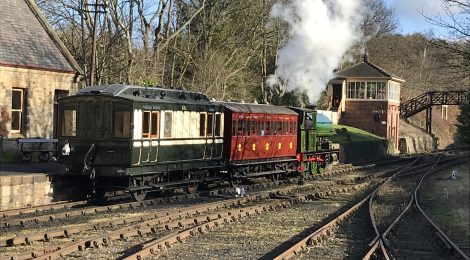 Unbelievably, another February half-term is nearly over and we are enjoyed a fairly busy week at the museum, having largely escaped recent storms (other than for some very cold, very windy weather). The gallopers did suffer at the hands of the wind and as a result were not able to operate this week, however they have been tested and await only the alignment of diaries with the formal (external) assessor for fairground rides (under what is called the ADIPS scheme) before they can be put into public operation.

New steps have been fitted as a precaution against damage to those previously fitted, and the centre engine has been tested and staff familiarised with its revised operation.

Even though we’ve been using these vehicles for several years, our recent revisions to the site driving policy requires us to demonstrate our familiarity with different vehicles. Matt usually uses the Tourer, whilst I favour the Crewe Tractor. So we carried out an exercise to demonstrate to each other that we are familiar with the type and can competently drive them (especially given their somewhat unconventional controls – when compared with almost all other vehicles!).

We anticipate an increase in use of the narrow gauge railway in 2021, when No.18 will be under overhaul and therefore the standard gauge operation will be curtailed in the Colliery (as Coffee Pot No.1 is not really suitable for daily operation and its wrought iron valve gear and rods require the locomotive to be operated with a certain degree of care – which can be be assisted by minimising its use as it celebrates its 149th birthday in 2020!).

The plan, therefore, is to see Samson (and Glyder) in more regular operation, for which crew training will take place during this year. Samson is being modified to improve its usability towards this end.

On the infrastructure front, there are a number of challenges for drivers on the narrow gauge, some fun, some less so! One of the areas we have never really been happy with is the severity of the curve into the top yard from the Pockerley direction, with a gentle and sinuous route suddenly veering sharply to the left as it arrives in the yard. As a result of this, the second ex Eastriggs turnout is to be installed as part of a plan to achieve two things – firstly an easing of the curve and secondly a means of providing a headshunt to allow operations to take place within the yard, without risk of rolling stock straying onto the running line or disappearing towards Pockerley or the Sinkers headshunt ends of the triangle. It will also put all of the ‘main’ running lines onto 35lb rail of known origin.