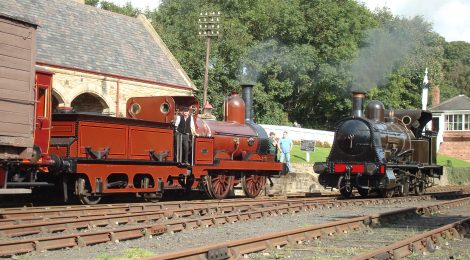 At this time, with the museum closed, there is very little news to report. However, there are various queries that have arrived, or observations that are worth sharing. Digging through the digital files for various images has also meant that I’ve encountered forgotten occasions or images that haven’t been posted on the blog previously, so I also thought that I would share some of those as well.

Dave Young has kept his eye in, as not being able to volunteer at Beamish, he has returned to working from his own machine shop, where is is manufacturing a new whistle (which is intended for Rambler though may see use on other engines, certainly for testing). It is nice to be able to post something of the ‘old’ order, so here are some workshop photographs showing progress to date.

A request appeared for some images of the late Eric Maxwell’s Black Hawthorn 0-4-0ST Wellington whilst it was based at Beamish. Built in 1873 (Works Number 266), the loco was based at Beamish from July 1998 to January 2006, though certainly didn’t work in the latter years of this and I believe was only operated very occasionally before that. When I arrived in 2004, Wellington was already dismantled for a boiler overhaul, and needing space for our own projects, it was agreed that it would return to Tanfield, being reassembled by Eric and myself in January 2006.

Comprehensive information can be found on Wellington here: https://www.tanfield-railway.co.uk/index.php?mact=LISETRLocomotives,cntnt01,detail,0&cntnt01item=wellington&cntnt01category=overhaul&cntnt01id_hierarchy=2&cntnt01template_category=hierarchy&cntnt01returnid=50

Whilst looking for images to illustrate other blog posts, I came across those that I took but which pre-date the blog, and so I thought that I would share a few of them here to give them a wider audience.

An afternoon with HCC No. E4, Stephenson Railway Museum

On the 28th June 2005, through the kind hospitality of John Clayson from Tyne & Wear Archives & Museums (who manage the North Tyneside Steam Railway and Museum), his colleague Mike Forrester (then the manager at the site) and Peter Barlow (from the Beamish Tramway Group but also contractor to TWAM), I was shown the Harton Coal Company electric locomotive E4 in action, which all three had restored to working order.

The photos below record the occasion. The waggon was restored in order to carry the batteries used to provide E4 with current, as there is no overhead available for this purpose (it originally operated on the 550V DC as used on the tramway and for trolleybuses). The photos below show the substantial cable connection between wagon and locomotive which means that it is permanently coupled in this arrangement, the smaller wires being (as I recall) for a CCTV camera mounted at the far end of the coal wagon to provide a view for the driver when propelling and shunting.

I believe that in more recent years replica bow collectors have been made to replace the pantograph current collector (ex Sunderland Tramway?). https://tanfield-railway.blogspot.com/2015/04/harton-electric-loco-e4.html

E4 was restored to a very high standard and, originating from 1909 it is a reminder about the early modernisation (and electrification) that was being undertaken in the coal industry at an earlier date than is perhaps always appreciated. At Beamish we have E2 on display – perhaps one day it will find a role similar to E4 (with batteries in a chaldron?!) for shunting on the Colliery Railway… E2 was cosmetically restored in 2006 – and looking back I wonder if it was the visit to see E4 that inspired this?! We had access to funding through the Renaissance in the Regions Hub – this also funding the cosmetic restoration of Seaham No.17, as seen in an earlier post on this site. It all seems a very long time ago now!

Visit by WST to Rowley Station from the Bowes Railway

In April 2006, after overcoming some internal resistance, the first locomotive of the revival era at Rowley Station arrived, in the form of 1954-built Barclay 0-4-0ST No.2361, named WST (William Steuart Trimble) which worked originally for British Gypsum at their Long Meg mine in Cumbria. It was presented to the Bowes Railway in 1980. Through the then Bowes manager, John Young, we were able to bring WST to Beamish and commence some shunting demonstrations at Rowley Station.

The area needed some considerable work before we started, and we used WST to pull out larger stumps and undergrowth as we prepared for a strictly non-passenger operation. WST visited twice, returning in July – September 2009.

The shunting operations were ad-hoc and gently enabled the creation of a suitable rule book and for us to gain experience of operating within the museum, it having been several years since anything other than the Waggonway had regularly operated.

Visit by No.22 from the Bowes Railway

In the summer of 2006 and between May 2009 and September 2009 (and again between March and April 2013 the other Bowes Railway Barclay 0-4-0ST visited Beamish. It was based at both Rowley and the Colliery during its time at the museum, as were a trio of Bowes Railway hopper waggons (and, for a period of time, two of their low-sided open waggons).

Built in 1949, works numbe 2274, No.22 was allocated to NCB area No.6 (North Wast Durham). It was originally intended that it would go to East Tanfield Colliery but instead was delivered new to Springwell Bankg Foot on the Bowes Railway, where it was numbered 22. It was later renumbered 85, and was reallocated to EAst Tanfield Colliery in 1954, before moving to Marley Hill shed (now the base of the Tanfield Railway) for operating between, and shunting at, Marley Hill and Burnopfield Collieries. In 1970 it left Marley Hill for St. Anthony’s Tar Works, though did little work there. In 1976 it was placed on loan to the now preserved Bowes Railway, British Coal later transferring ownership to the Bowes.

Following the clear public appeal of seeing steam engines running again at Rowley, thoughts turned to something a little more ambitious… In conjunction with the National Railway Museum at Shildon and the Tanfield Railway, along with the Vintage Carriage Trust and Furness Railway Trust, a plan emerged by which Beamish would stage a leg of a regional tour by Furness Railway 0-4-0 No.20 and Haydock 0-6-0WT Bellerophon. To further set the scene, a rake of chaldrons was moved from the Colliery Railway to Rowley and two four-wheel coaches were borrowed from the Tanfield Railway.

The idea was to create some moving cameos for visitors to enjoy, and to really push the idea of returning Rowley to a regularly operational state. Much horse-trading was conducted to pull this off, also requiring the indulgence of Dave Antell, haulier, who stayed in the region for a month and whose costs were helped by finding other work for him whilst he was here (I recall he moved a Sentinel diesel hydraulic shunter from Wolsingham to Shildon as well).

A David Williams photo-charter was also held to bring in additional income, my aim being to make this as cost-neutral as possible. The old order of the time was not at all keen on the event and there were a number of difficult conversations as it became clear as to the extent of what I was doing! However, my then boss was very supportive and the event went ahead over the last weekend (including Friday) of September 2008.

As additional attractions, the serendipitous timing of the arrival of Mike Sutcliffe’s superb LNWR Leyland charabanc and Michael Davison’s 1889 Marshall traction engine Mary Margaret added to the scene. The former was some fun to operate! The latter became a regular feature of the Beamish scene for several years, being based on the Regional Museum Store as that became a ‘temporary’ home to a number of road steam engines!

The event was blessed with great weather and, for the time, great visitor numbers. We made a lot of new friends and enjoyed the support of various organisations and owners in creating a very memorable occasion.

The outcome was the request to look at regular passenger train operation at Rowley, which was to come the following year. The track was relaid with the assistance of Komatsu UK who provided machinery and staff for the project, and by 2009 we were ready to start regular weekend and school holiday operation at Rowley once again… So here are some photos to enjoy of what was a significant event for railway operation at Beamish.

Renewing the Railway – Rowley Station before and after…

The impetus to restart railway operations at Rowley Station was now established, so the actual work had to begin – and this was where the support of Komatsu UK proved to be invaluable. I had noticed they had a lot of machinery parked up, due to the the economic slump globally that was then becoming a fact of life. I asked if they might consider giving us one – the answer being no (perhaps not unsurprisingly, these machines are expensive!) but they did offer the loan of a machine plus a team of men for a period of time. This enabled us to make a start on renewal of the running line and work commenced in June 2009.

The first gallery of images below shows the railway as it was in 2005, overgrown and seeing almost no use for several years (though it had hosted the Steam Railway Magazine sponsored visit by the North Norfolk Railway’s J15 alongside the then Beamish owned J21 in June 2003). Construction work on the Masonic Temple had encroached onto the trackbed and the undergrowth was rapidly taking a hold. The trackbed was ash and with no drainage, the cutting was sodden and inhospitable.

The next gallery (below) shows the work in June 2006 carried out by museum staff and employees from Komatsu UK. The running line through the cutting was lifted, a new base cleared and drainage added over which a textile base and fresh ballast was laid. The same rails and chairs were used, with reclaimed sleepers being purchased for use here. The curve was extensively spot re-sleepered and ballasted. Tamping was carried out using the Tanfield Railway’s machine and some extensive vegetation clearance was undertaken. Quite a difference and ready for operations to commence in April 2010 – ten years ago…

Well, that post rather grew into something I hadn’t planned! We should have Part 4 of the cycles series from Ian Bean soon, after which I will see what else I can find to keep readers entertained – perhaps a feature on travelling with locomotives (as we undertaken many visits to other railways and sites with our collection over the years). I’m amenable to any requests too, if readers want to suggest a theme for a piece. I can’t promise I can fulfil these given the limited access to archives I have at the moment, but I will try my best!