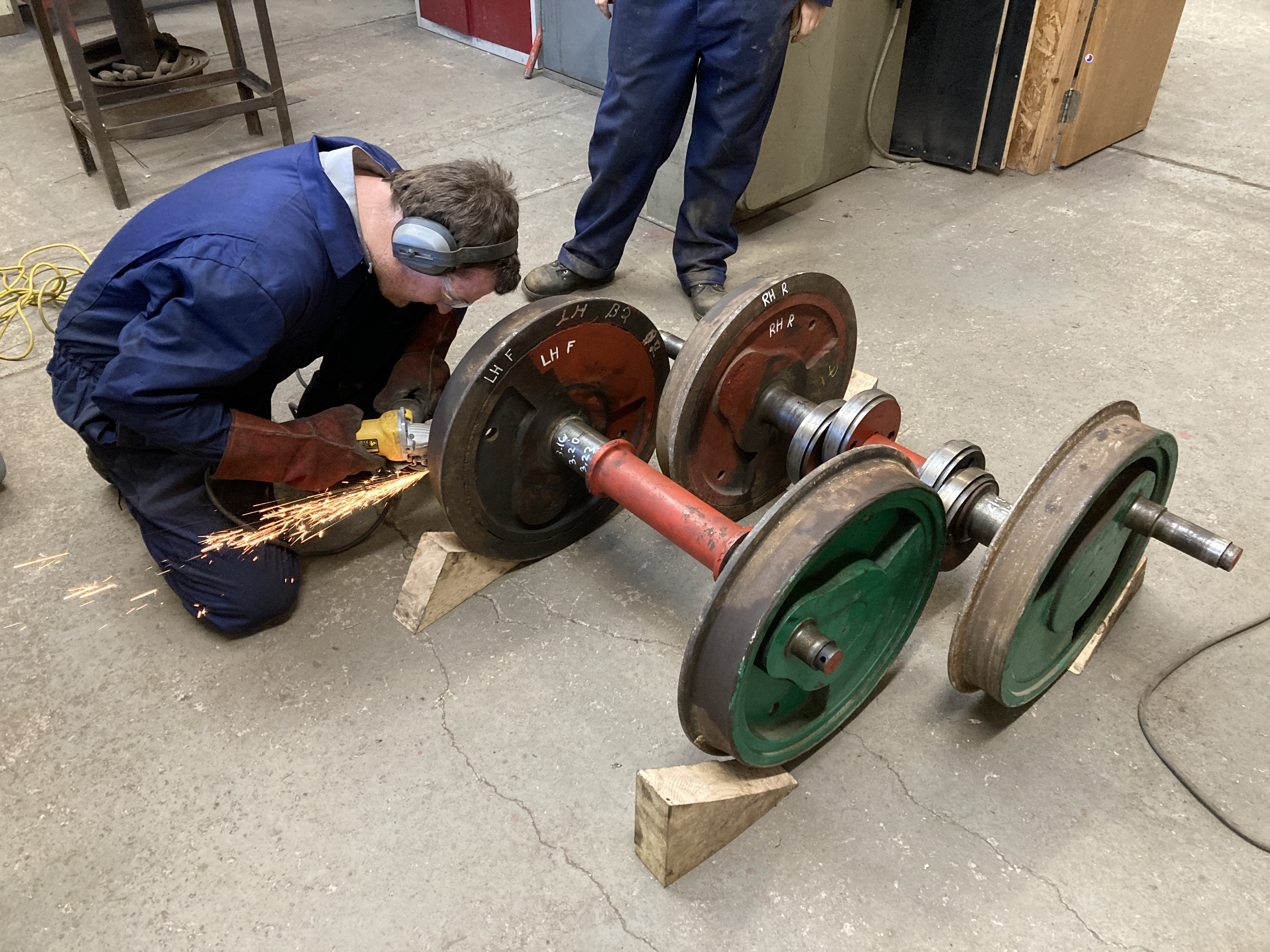 In this report we take a look specifically at the ongoing restoration of ex Dundee Gas Works Kerr Stuart 0-4-0WT No.721.  This project is largely being undertaken by our engineering apprentice Zoe, with assistance from colleagues, volunteers and some contract work too.  The aim is to give her (Zoe) a broad range of experience, and opportunity to lead on elements of a ‘typical’ heavy overhaul with a variety and range of engineering techniques displayed.  Matt has prepared some notes on the work currently underway, which I have inserted into this post to create the report below.

Below: A reminder of what No.721 looks like in one piece… 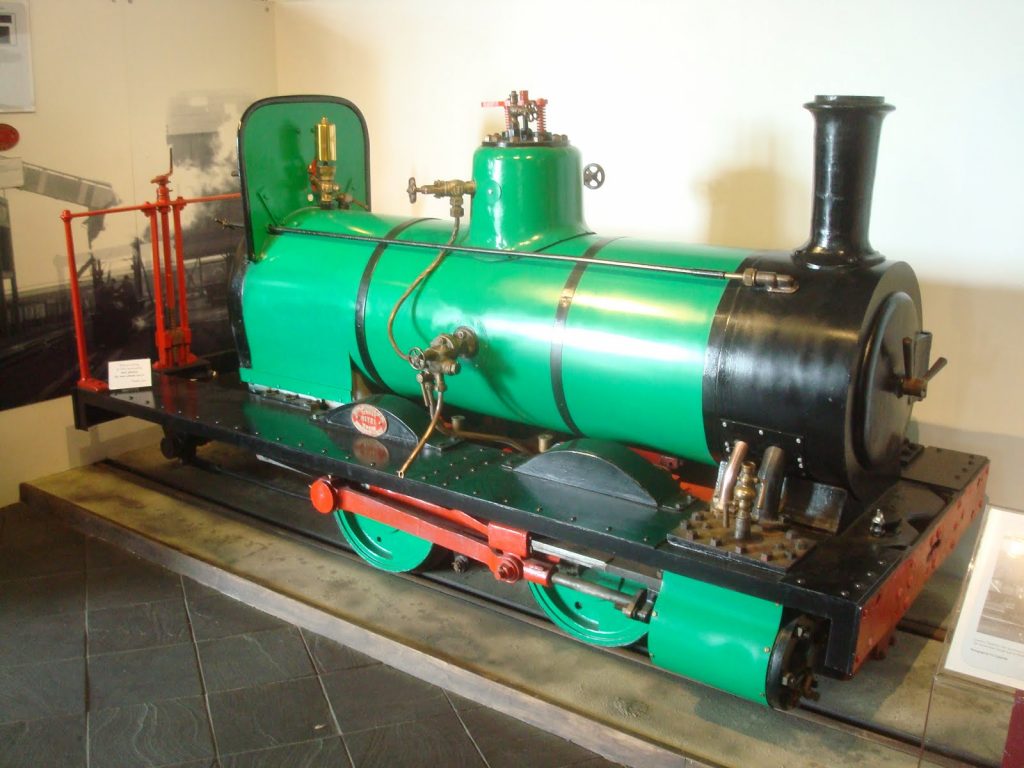 Below:  Starting with the boiler. All the tubes, tube plate rivets and internal steam pipes had been removed before we went into the March 2020 lockdown. On our return, we managed to pick up on the boiler work sporadically whilst we worked on other more pressing items. By mid-2021 the tube plate had been removed, and the boiler thoroughly descaled and all paint removed to permit thorough inspection.

British Engineering Services attended the boiler to carry out an all-round NDT (non-destructive testing) survey of the boiler which included material thicknesses and Mag Particle or Dye Penetrant crack detection on all plate work. The NDT survey has not raised anything of concern with two small exceptions. These are an area of boiler barrel immediately behind the tube plate which is thin and the front tube plate being cracked on its flange both of which we knew about. BES then inspected the boiler visually and between ourselves and BES we have agreed the scope of repairs to return the boiler to service. In Jan 2022 we are now in the process of procuring a new flanged tubeplate and obtaining prices to complete the other repairs and reassembly of the boiler. 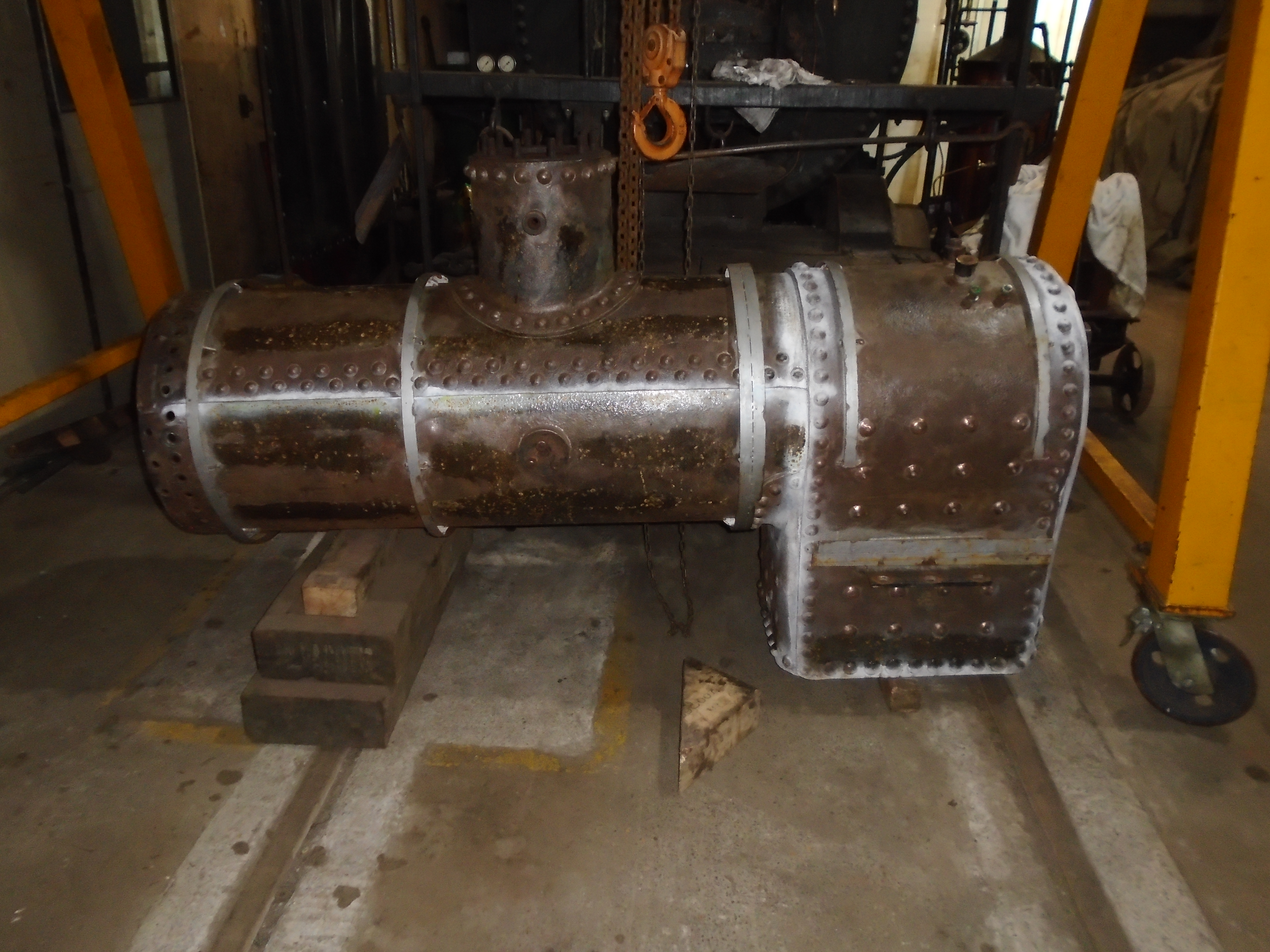 Onto the bottom end. We left the bottom end largely in one piece until we had the feedback from the boiler NDT report, just in case this threw up anything prohibitively expensive, or challenging from a curatorial perspective. The bottom end has then been dismantled for assessment. It is fair to say that the bottom end has had a very hard life with every component being worn to excess. Two great examples of this are the wheelsets and in particular one axle box.

Below: Zoe has dismantled the valve gear, removed the wheelsets and axleboxes and begun to assess the work needed to restore these components for further use. 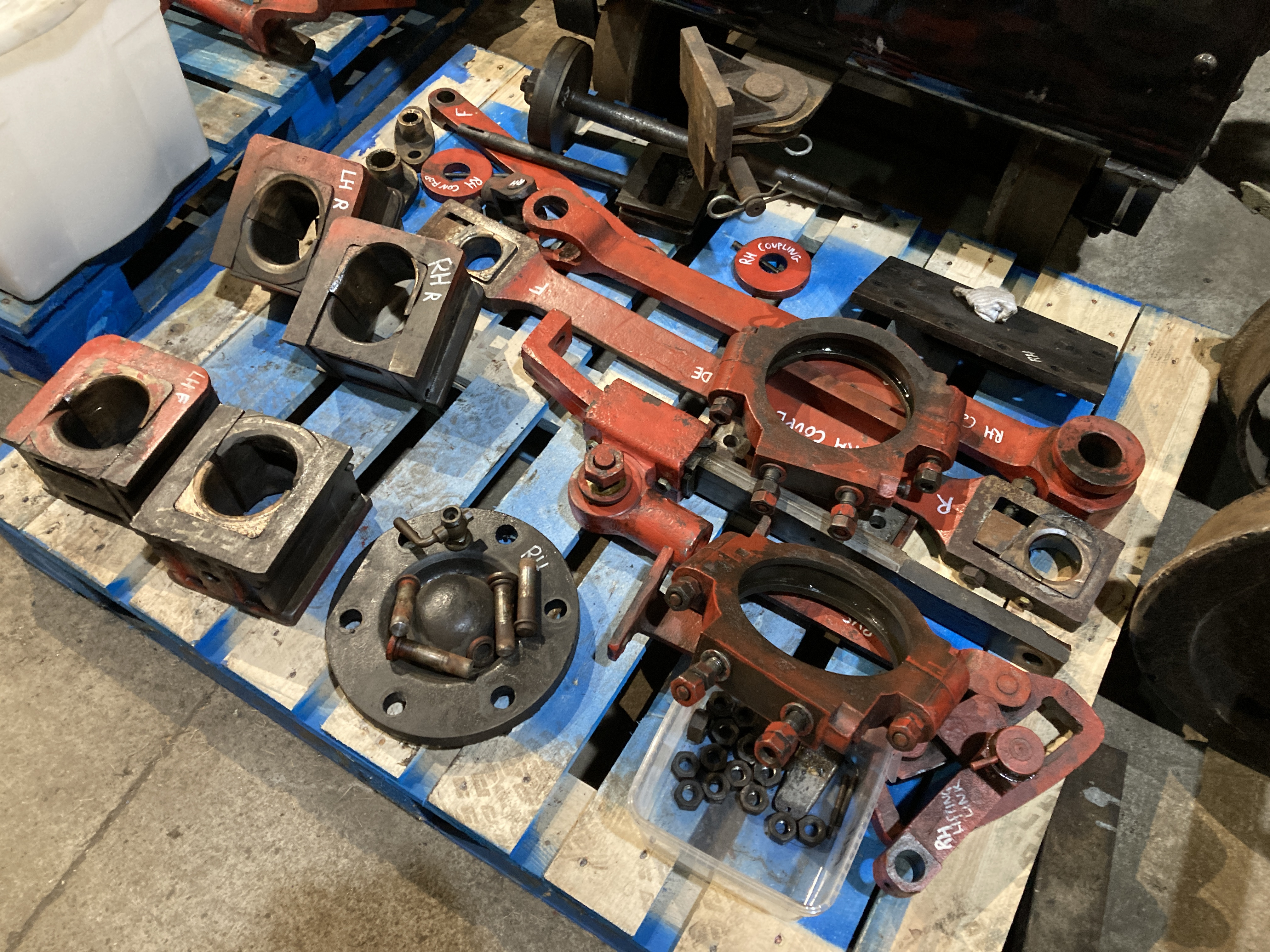 Below: The axleboxes, as Matt mentions, are in particularly poor condition – note the wear on the example in the right of this photo, showing the crown worn through all the way into the box itself. 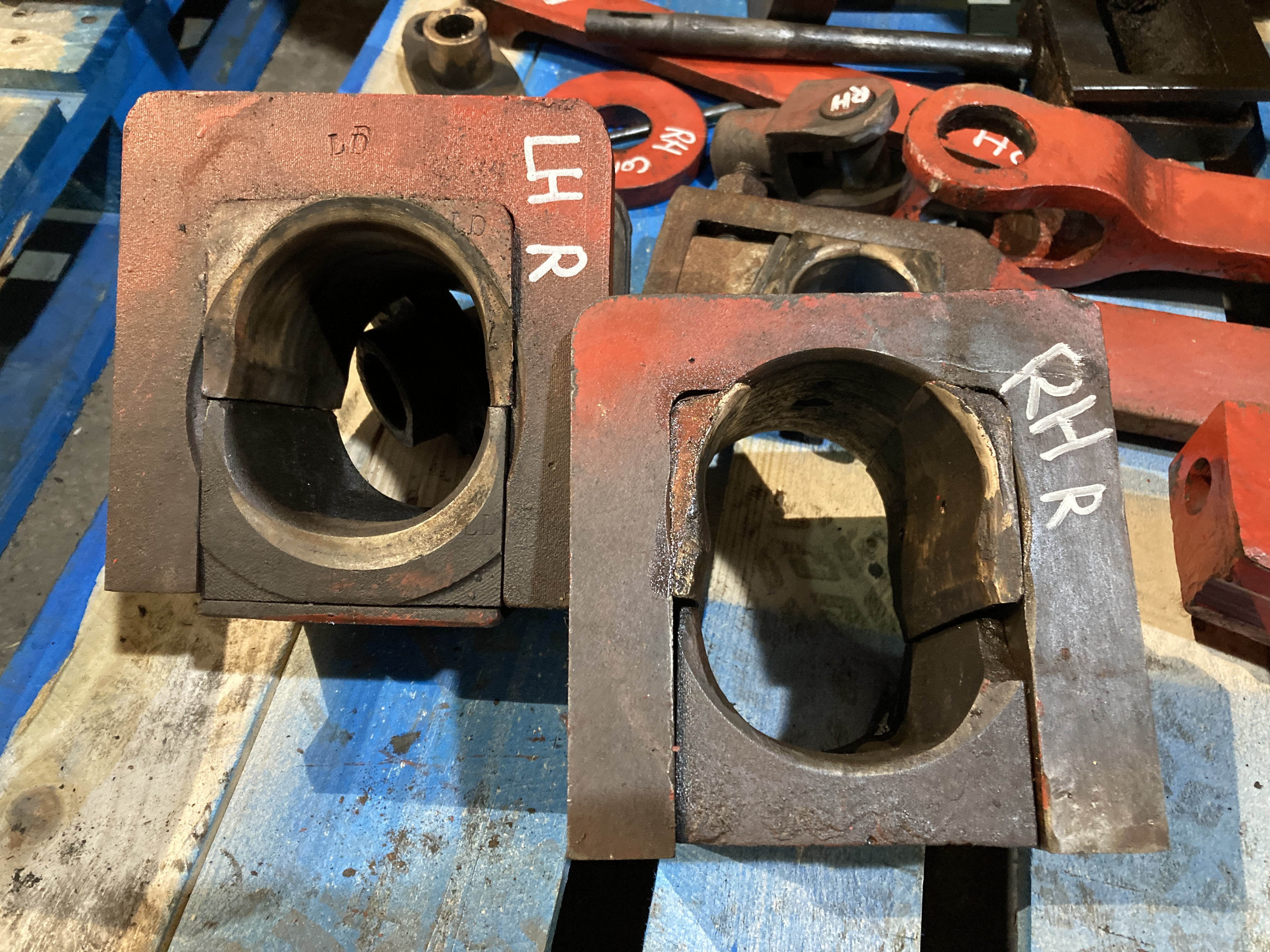 Below: Gas works locomotives were clearly worked hard with minimal maintenance, particularly in their later years.  Here are the increasingly bare frames from 721.  Note the cast water tank at the front (with cylinders either side). 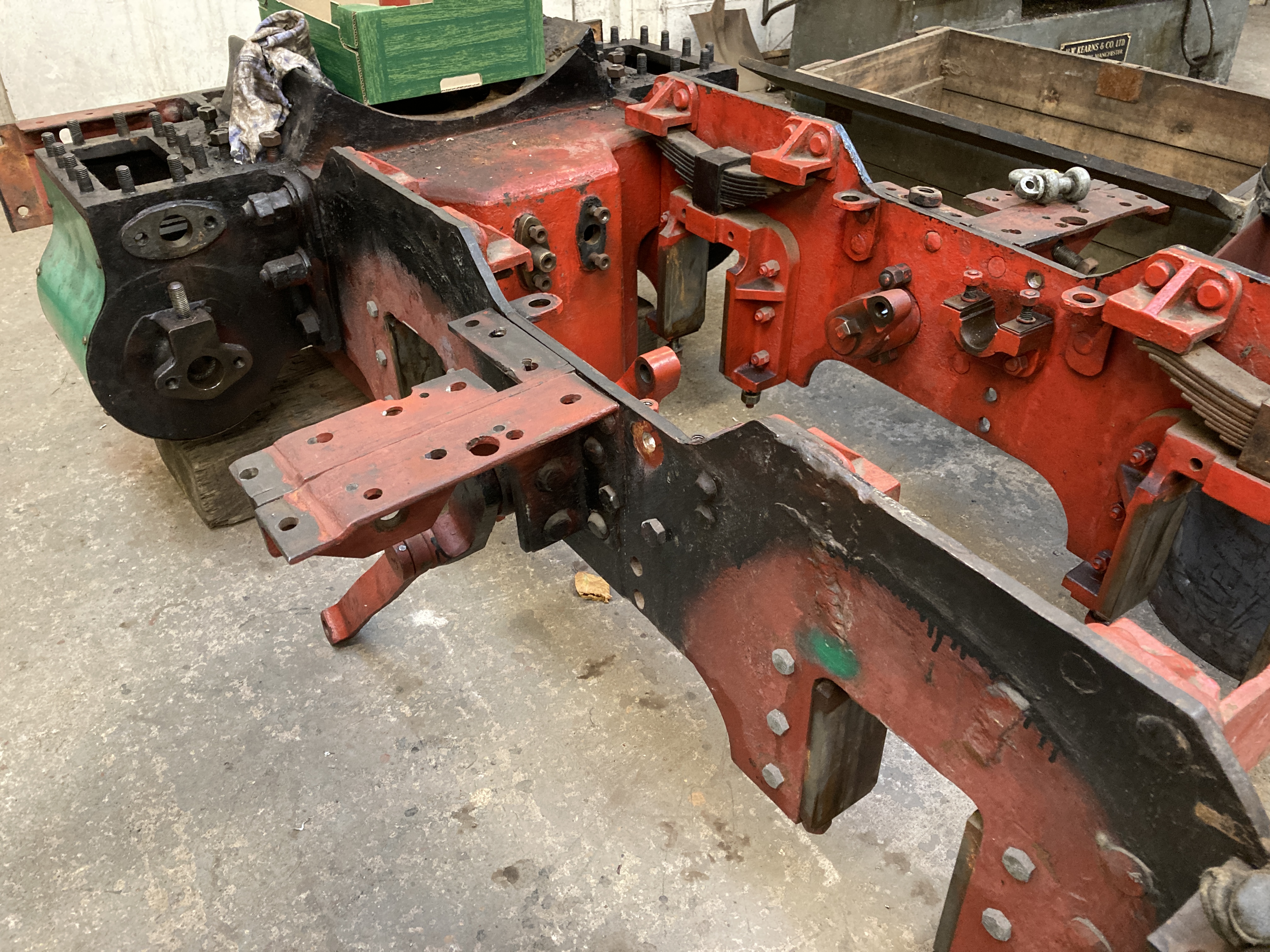 The wheelset tyres are worn in an odd way (see photos below) – one side of the loco has a very sharp flange and the other a conical profile with almost no flange. This perhaps indicates that the loco ran round one direction of curve for most of its life [this is indeed the case – the contemporary OS maps showing the system in Dundee, off East Dock Street, show that the locomotives generally faced right hand curves, with just one exception – PJ]. None of the axle boxes appear to have oil holes through to the journal. In one case, this has resulted in the axle wearing through the brass and into the iron box. 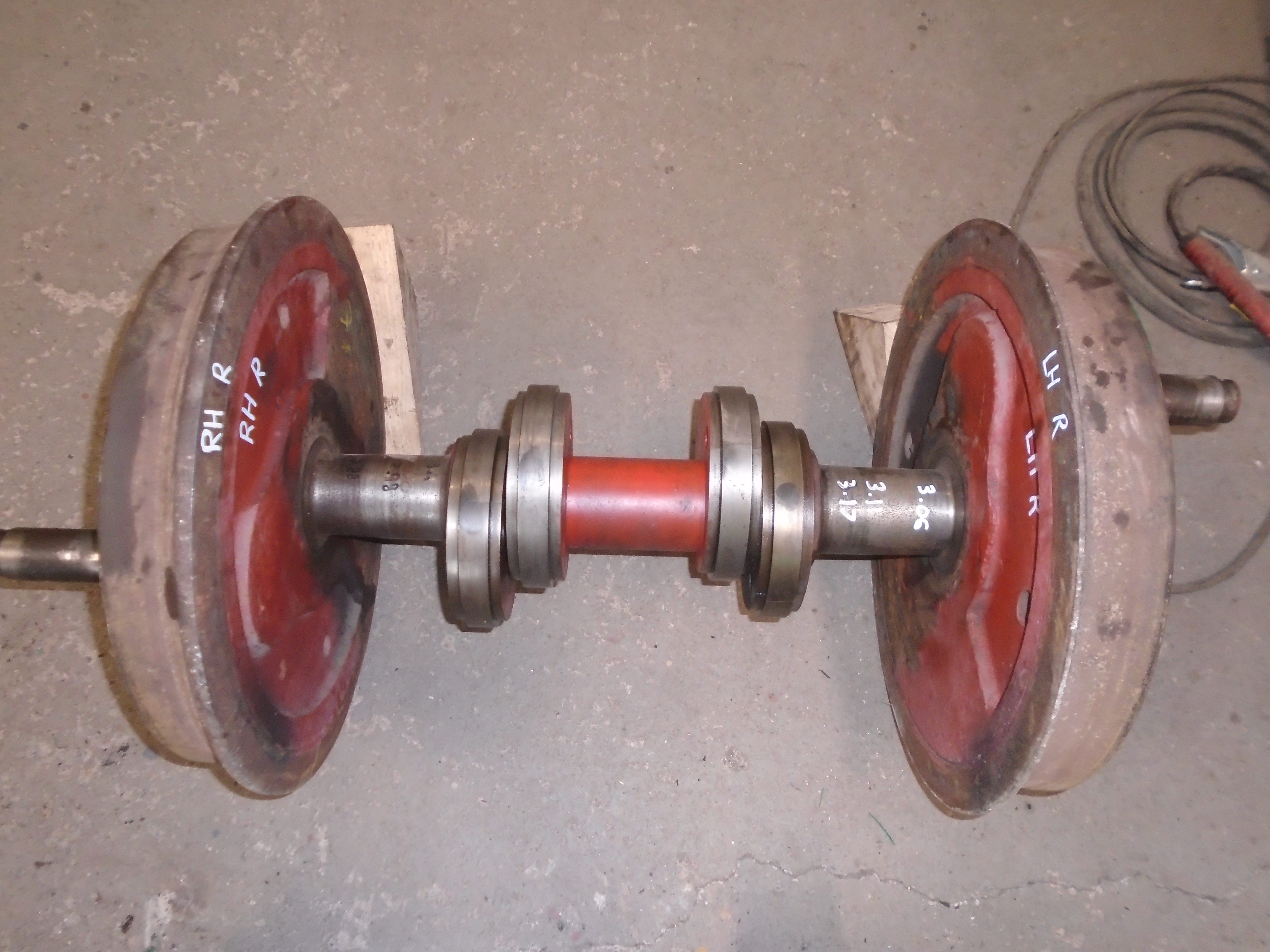 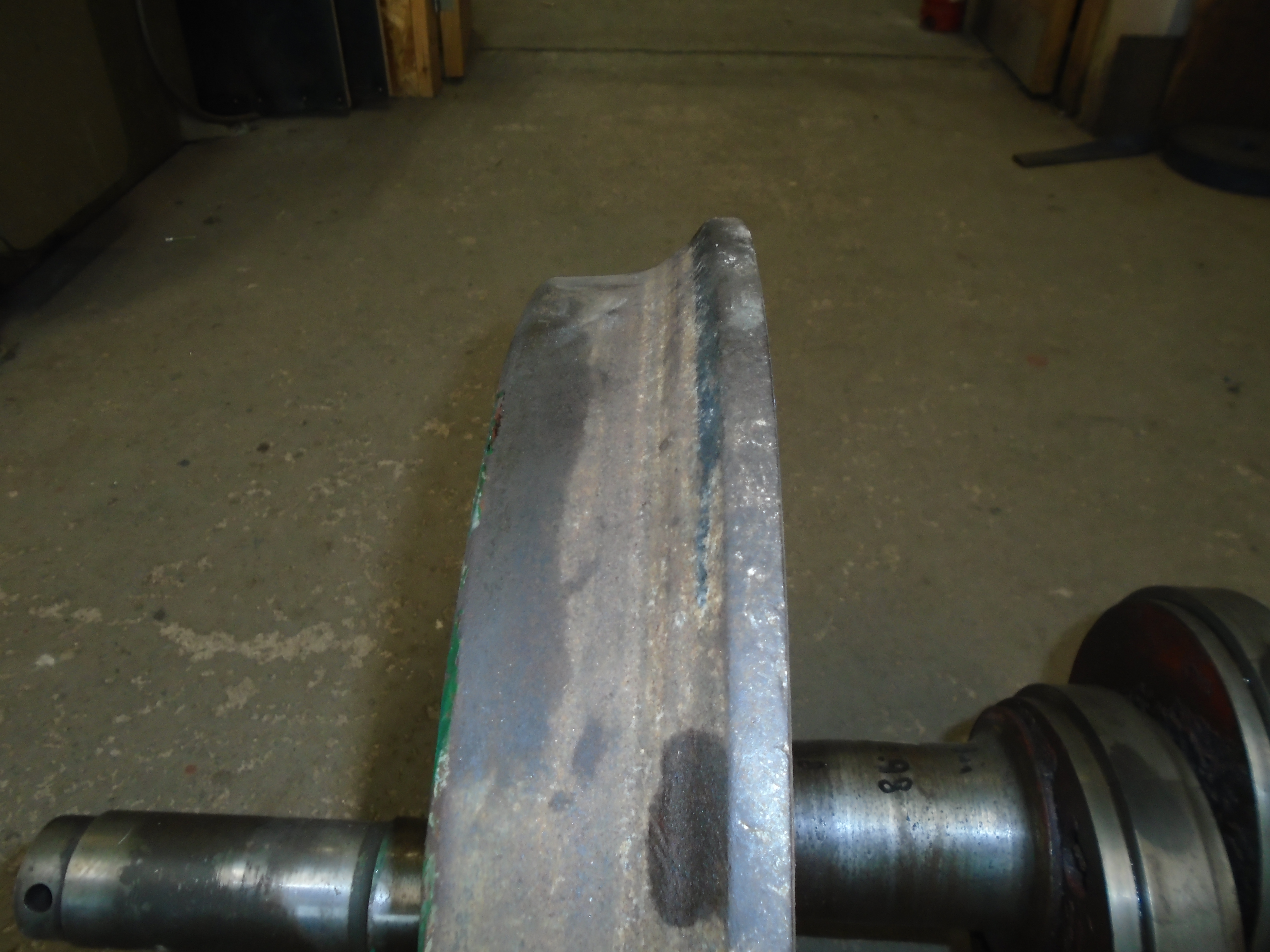 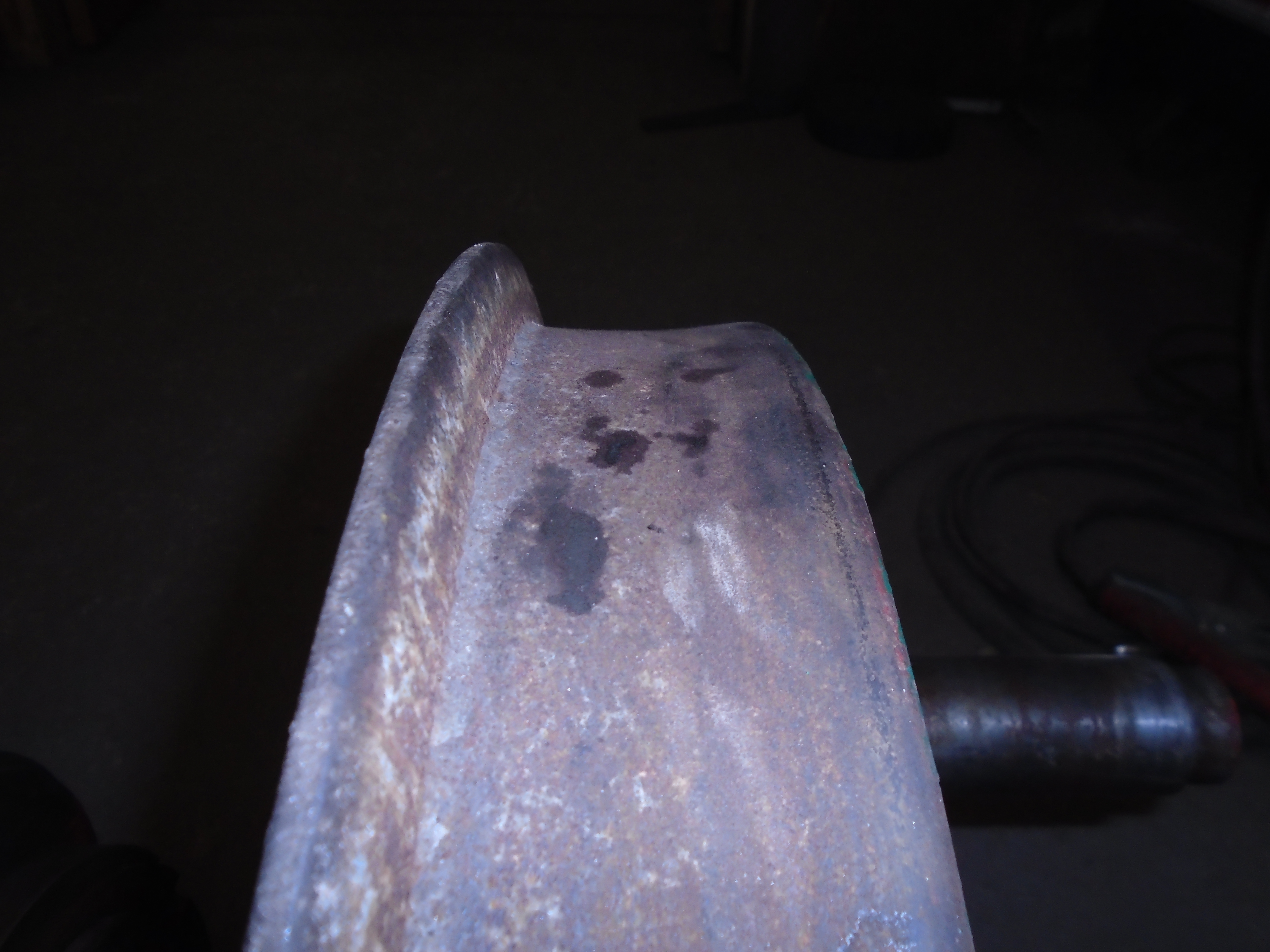 Next on the agenda for the bottom end was the removal of the tyres from the wheels so that we can order replacements. The cylinder bores will then be measured to assess wear prior to re-boring in situ if required and re-facing of the valve faces. The frames have a number of historical weld repairs and these will be stripped of paint and dye penetrant tested to ensure they are not cracked.

Below: Matt instructs Zoe on the method applied to removing the tyres, which as they are shrunk onto the wheel centres, will let-go with some force when cut.  It is also imperitve not to cut into the wheel centre, or the face (where the tyre has a lip to locate it). 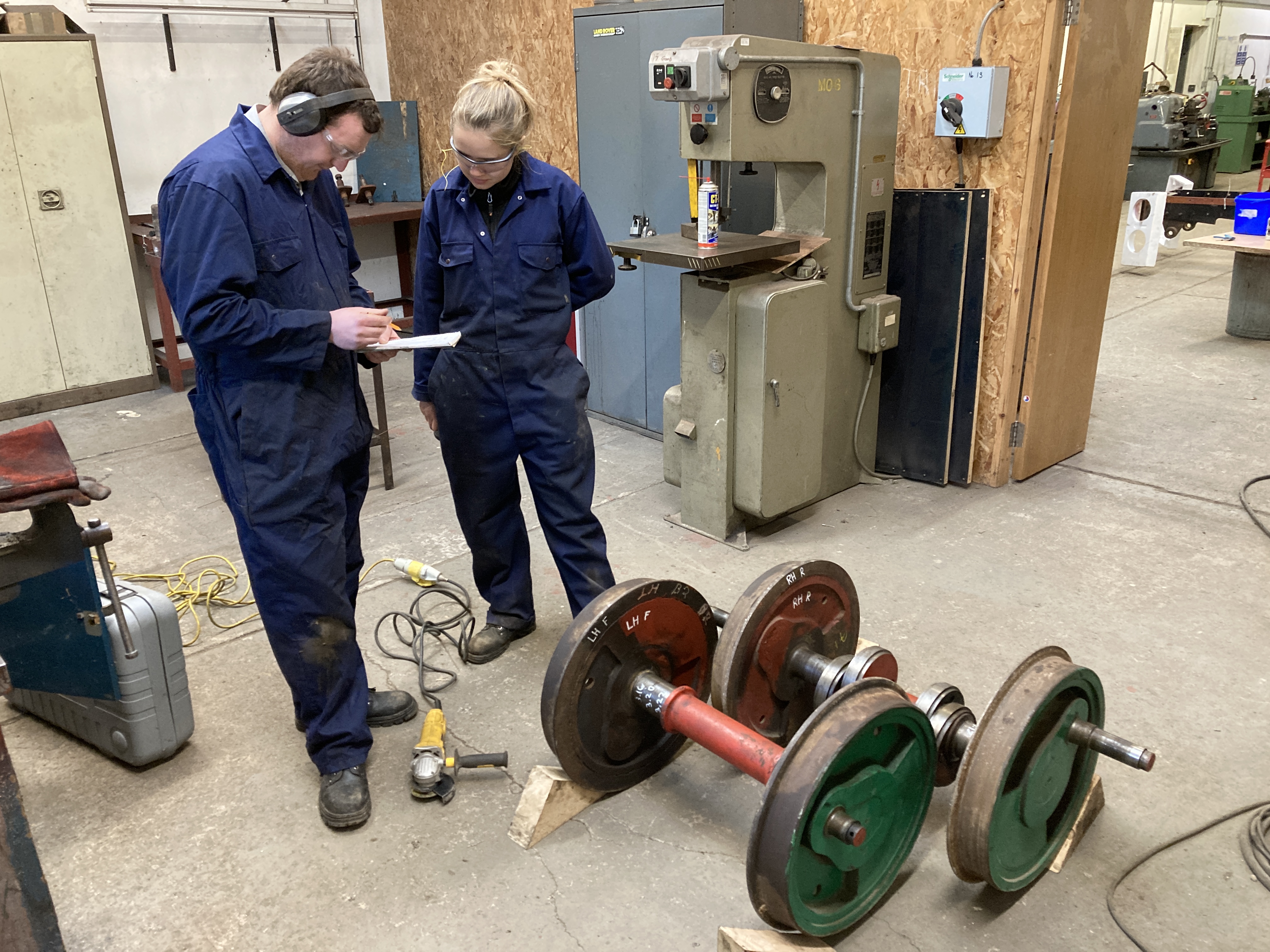 Below: One of the tyres removed – note the old witness marks on the wheel centre from previous tyre renewal!  The loco will also require new crankpins as well as the journals skimming.  The sledgehammer is witness to the effort to remove the tyre from the centre once the cut was made. 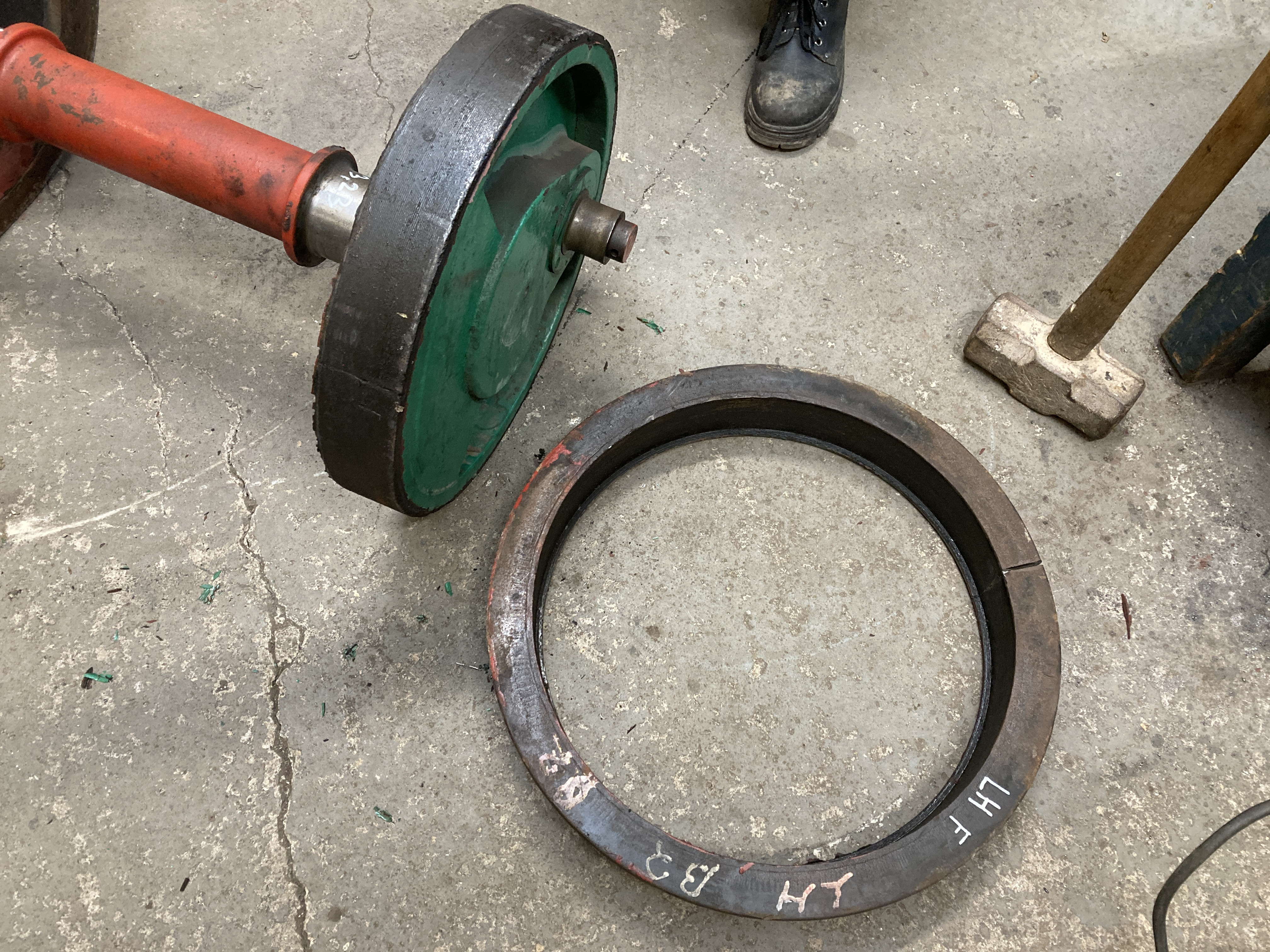 Below: The valve rod glands require replacement, so David Young has made a pattern for these (subsequently cast) as one of the early new-components being manufactured as part of 721’s return to steam. 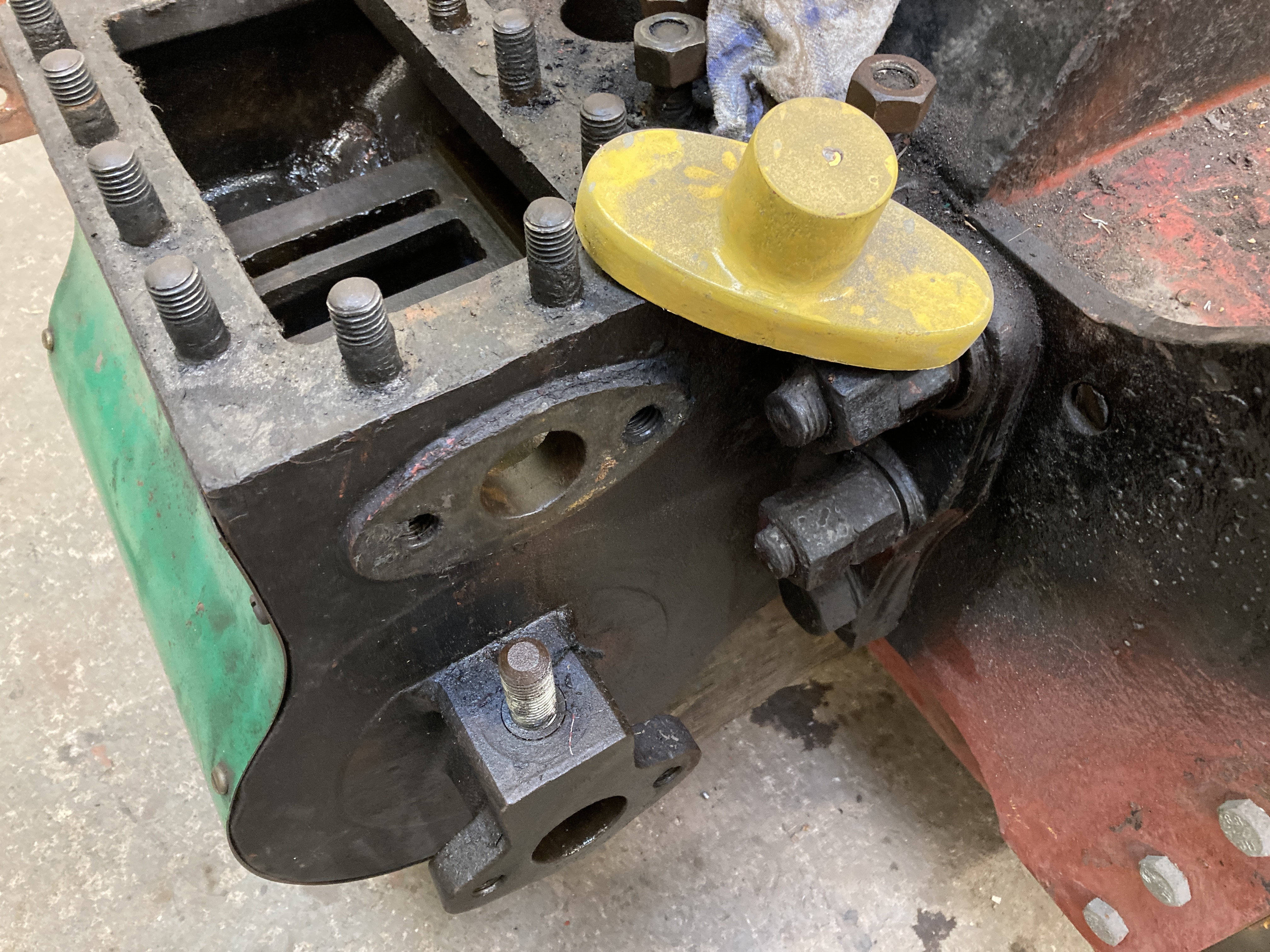 Below: A reminder of what we are restoring!  Here is 721 in dark green and line out.  Image courtesy of Jonathan Clay 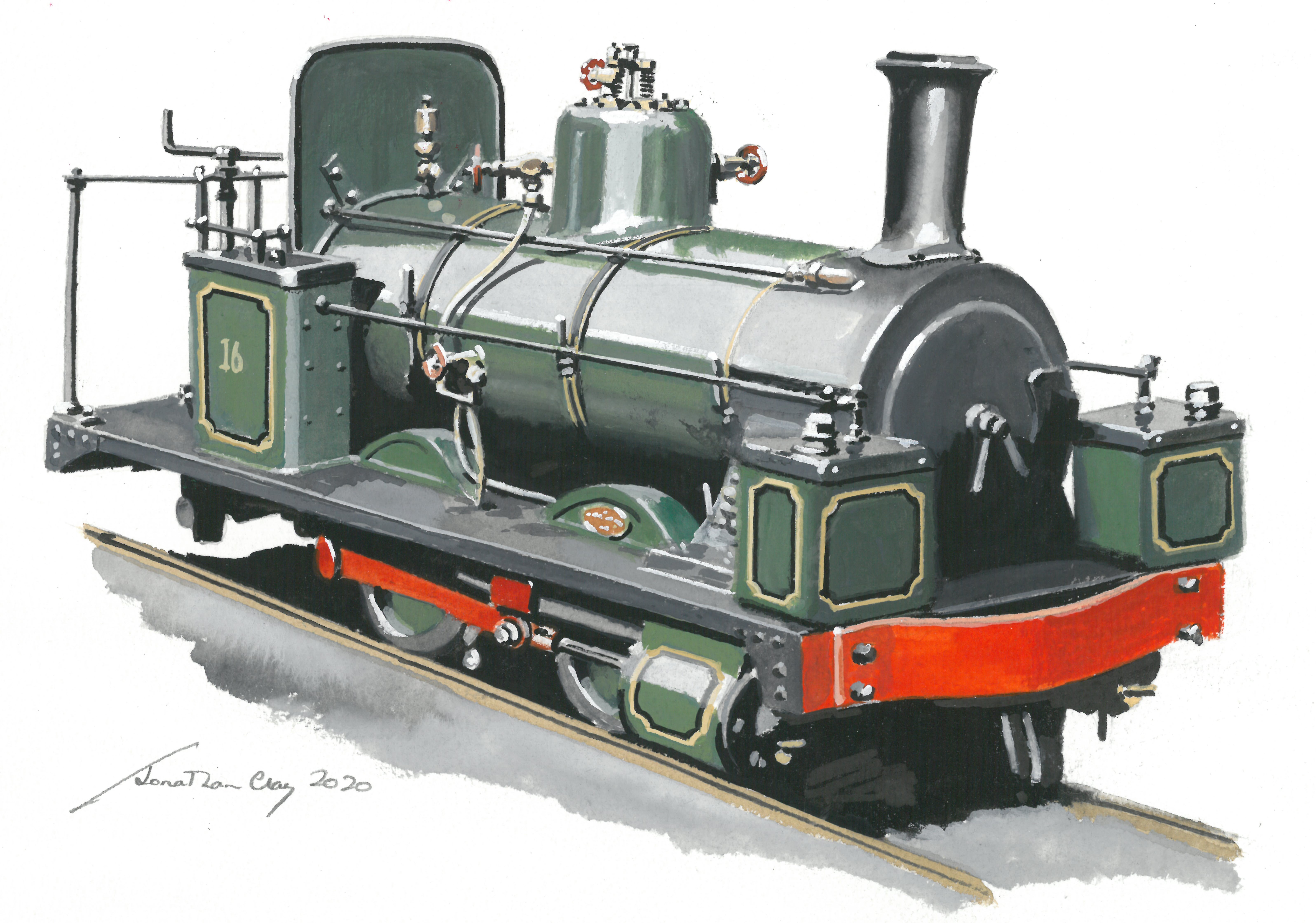 Last year I prepared an article for Heritage Railway Magazine, about 721.  This is reproduced here, by courtesy of Robin Jones, the magazine’s editor.