About the Beamish Tramway System

For many years trams were an accepted part of the everyday street scene, but – perhaps because of this familiarity – little attention was paid to their role in town life.  Yet during a period of rapid urbanisation, the trams were the main form of local transport: in spite of opposition they provided fast, cheap and convenient services which profoundly influenced the expansion and development of our towns. 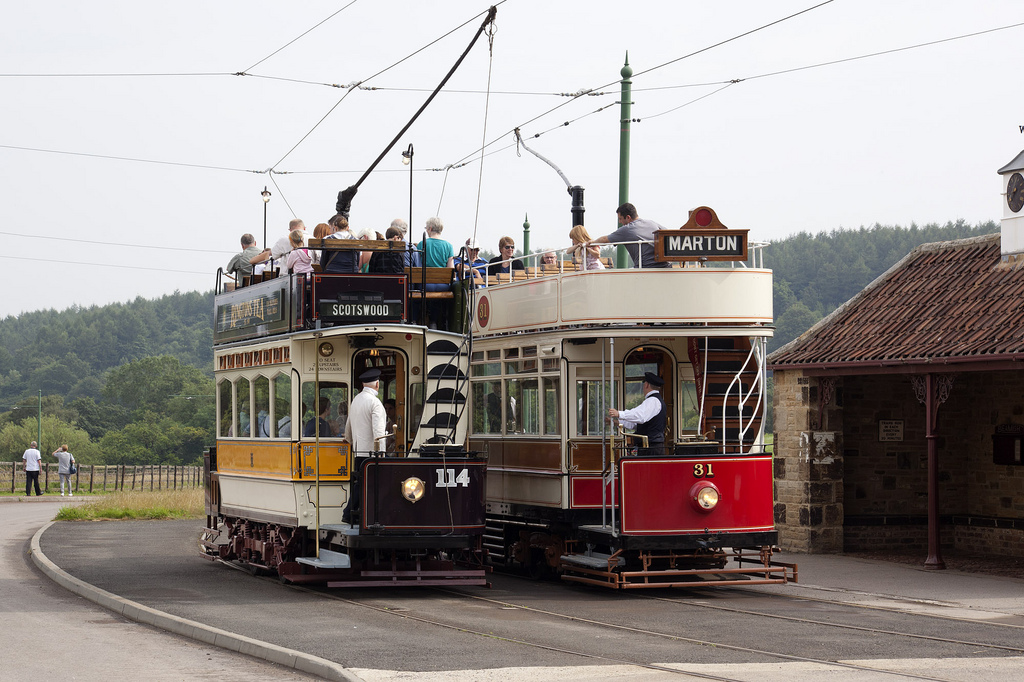 From the pioneering days of the 1890s to the 1920s, electric tramway systems flourished and expanded, and the number of trams in service in the British Isles grew to over 14,000.  Thereafter, in the face of under-investment, increasing road congestion and competition from motor buses, trams suffered a severe decline.  Some of the larger tramways modernised in the 1930s, but many succumbed to trolleybus or diesel bus operation.  After the war the number of trams in service had fallen to 6,000 with most remaining systems in a deplorable condition.  Despite further modernisation in some cities, notably Glasgow, Sheffield, Liverpool and Leeds, by 1960 only 440 trams remained in use.  By the end of 1962, only Blackpool was still operating its tramway – which it retains to this day.

The virtually tramless 1960s and 1970s saw also the complete abandonment of trolleybus operation in this country; however there followed a resurgence of interest in light rail systems and their environmental advantages.  From 1980 there has been a steady rise in the number of operating systems.  Tyne and Wear Metro, Docklands Light Railway, Manchester Metrolink, South Yorkshire Supertram, Midland Metro, Croydon Tramlink and Nottingham Express Transit are all now operating – and some expanding.  Edinburgh Tram is under construction and future systems are at various planning stages.

Beamish Tramway, opened in 1973, serves to re-create the experience and atmosphere of tramway operation of an earlier generation, whilst providing an essential means of transport for visitors around the site.

The original 1973 route comprised a single track from the Depot at Foulbridge to the boundary of the Town site.  This was extended into the growing Town in 1975, and then extended beyond Foulbridge to the new Visitor Entrance in 1988, bringing the route to a mile in length, with passing loops at all three stops.  Then in 1993 a major extension completed the circle from Town via Pockerley (with a further passing loop), up a steep gradient through Birch Wood, back to the Visitor Entrance.  The completed route is now some one and three-quarter miles in length, with four passing loops.

Over the years, the second-hand rail originally laid has been replaced by new material.  Most of the track comprises flat-bottomed 80A section railway rail, spiked to base-plates and timber sleepers, with check rails on heavier curves, as ‘reserved’ ballasted track.  In the street-running areas however Ri60 section grooved tram rail is used, set with tie-rods on a reinforced concrete bed, with infill in tarmac, or granite setts in period areas.  Points at loops and cross-overs are all new, by Edgar Allen Ltd, with 1 in 6 crossings, and sprung turnout blades where appropriate.  Trackwork in and around the Depot is in mainly second-hand material.

The Overhead Line and Power Supply

The poles supporting the overhead have all been recovered from former tram and trolleybus systems, in many cases restored to their original length by specialist welding.  They are set in concrete to a depth of about 2 metres.  The trolley wire is grooved copper alloy, 4/0 gauge (80 sq. mm), suspended either from bracket arms or on span-wire construction, at a normal height of 6 metres.  A second (negative) wire is provided in the Depot area, for safety earthing purposes, and for test-running the trolleybus.  The trams are all fitted with trolley poles and carbon-slipper trolley heads, and return their traction current via the running rails.  Overhead fittings have been salvaged from the Newcastle, South Shields, Tees-side and Bradford systems, and in the Town area period fittings have been used wherever practicable.  Elsewhere the opportunity has been taken to use modern French and Swiss fittings, and to prototype test new UK fittings.  The line voltage is 550V dc, and the overhead is divided into electrical sections with trackside section and earthing switches to gain maximum operating flexibility.  The dc power is derived from the Northern Electric 20kV / 415V ac incoming mains via a 150kW 12-pulse silicon transformer-rectifier set and feeder circuit breaker.  A 250kW motor-generator set is also available on standby.  The substation is located in the Tram Depot, from where the supply is taken to the feeder pole by underground cable.  A Permit-to-Work safety system is used when working on the substation or main line overhead equipment, and a warning lamp and key interlock system is used for work on or near the Depot overhead line equipment.

The service pattern varies from one tram in use during the winter season, through two or three during the early summer, to four on high season days.  Exceptionally, the whole tram fleet has turned out on August Bank Holidays.  The track layout allows operation in both directions round the circular route, with short-workings at the start and finish of each day’s service.  The pattern, and changes to it, are controlled by the Tramway Supervisor, who keeps the drivers informed of the passing instructions at the loops.  The single track sections are therefore regulated by service pattern knowledge and ‘line of sight’ working, with one exception.  The steep gradient on a curve through Birch Wood precludes the use of ‘line of sight’; here control is ensured by a pair of electrically linked ‘block token’ instruments, located in green trackside cabinets at Visitor Entrance and Pockerley Bottom loops.  A driver must collect a token as authority to proceed; removal of a token locks both instruments, preventing removal of another token until the first is replaced.  Electrical impulse clocks, driven from a master clock in the Depot, are located at each passing loop in pole-mounted boxes.  These also contain telephones connected into the PABX exchange, also located in the Depot.  Each tram in service also carries a radio hand-set for normal and emergency site use.

The Depot is located within the Foulbridge workshop complex and includes accommodation for trams on four roads (1, 2 3 and 4) and for cars, buses and trolleybuses on roads 4 and 5.  Road 3 is equipped with an inspection and service pit.  Mechanical and Electrical workshops and Stores provide the facilities for routine maintenance, repairs, overhauls and complete restoration work, not only on the vehicles but also on the track, power supply and overhead line system.  Although much of the work on the trams is carried out on site, some specialist work such as traction motor overhauls and wheel re-profiling is undertaken off site by local contractors.  The Depot also houses the substation and telephone exchange.

The operating fleet currently stands at nine trams, full details of which are given on the Fleet List and individual Data Sheets.  The lower deck of Sunderland tram 16, recovered from a farm near Hexham, formed the basis of the most recent major rebuilding project which restored the tram to operating condition, while the body of Keighley trolleybus 12 is being investigated with a view to rebuilding.  The restoration of 1948 Sunbeam S7 Newcastle trolleybus 501 to full working order is now complete, as is the restoration of Smiths Electric Van 936 JUP.  Currently on loan to Beamish Tramway are Leeds 6 from Heaton Park Tramway and Sunderland 101 (formerly Blackpool ‘Balloon’ 703) and Blackpool ‘Boat’ 233 from the Lancastrian Transport Trust.

Since 1973 Beamish Tramway has developed from a short demonstration line with one tram to the present operation involving six trams dealing with a million passenger-journeys annually, placing it as the busiest heritage tramway in the UK.  This has been achieved through co-operation between the Museum and its volunteers – Northern Tramway Sponsors, Beamish Tramway Group and the Friends of Beamish.