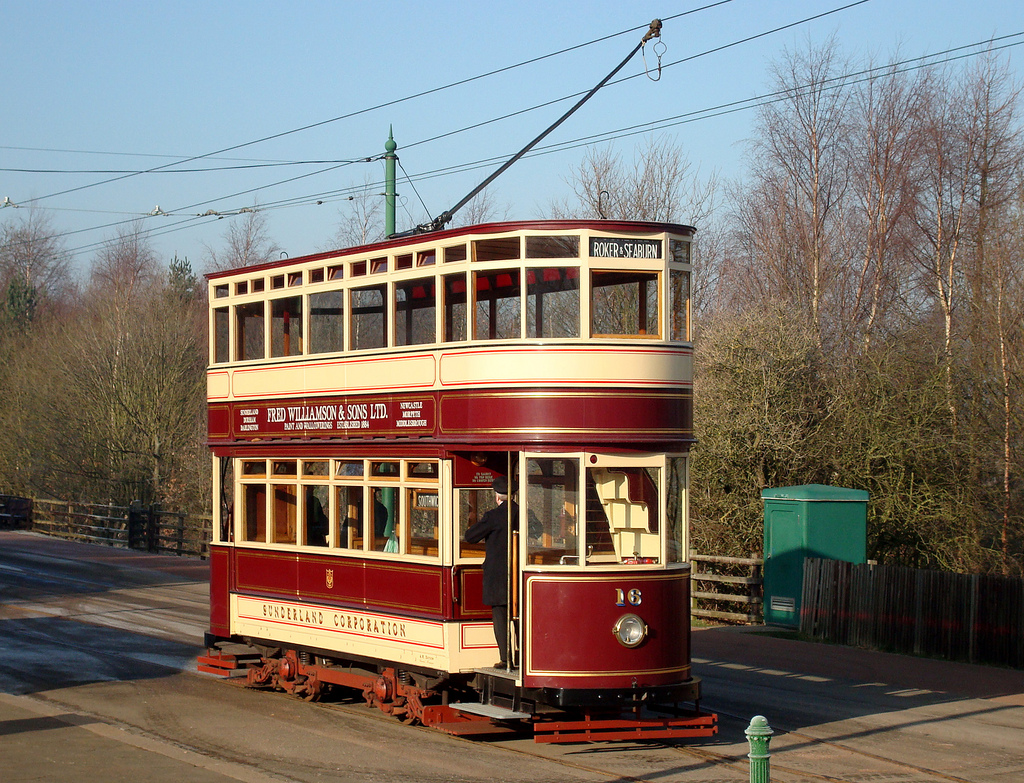 Sunderland Corporation Tramways No.16 was built as an open-top tramcar by Dick, Kerr & Co., Preston, in 1900, forming with her five sister trams the batch 13-18.  As with many other tramway undertakings, Sunderland fitted its early vehicles with top covers, and most of its fleet was so dealt with by 1916.

However, No.16 and the others of the same class had to wait until after the Great War to receive this treatment.  Many other modifications followed in the 1920s and 1930s: new trucks, new staircases, alterations to the seating, and the substitution of a bow collector in place of the trolley pole.

When the Sunderland tram system closed in 1954, a number of tram bodies escaped the usual fate of burning in a scrapyard, instead finding a new use as football changing-rooms.  After a spell on a football field, the lower saloon of No.16 was moved to Westwood Farm, Low Warden, near Hexham, Northumberland, where it spent the next 30-odd years as a tool-shed and apple store.  The body was rescued by Beamish North of England Open-Air Museum in 1989 as a potential restoration project, followed by several years’ research work, production of engineering drawings and procurement of both materials and specialist services.

Three major contracts were let: for the refurbishment of a second-hand Peckham P35 truck, for the reconstruction of the recovered lower saloon, and for the construction of a new top deck from drawings.  These three elements came together at Beamish early in 2001, followed by two years’ painstaking work to restore this sole-surviving original Sunderland tram to its 1920s enclosed double-deck condition.  No.16 was launched into service in July 2003, providing a useful 66-seat vehicle for year-round use on Beamish Tramway, whilst representing the second-largest tramway undertaking in the North East.