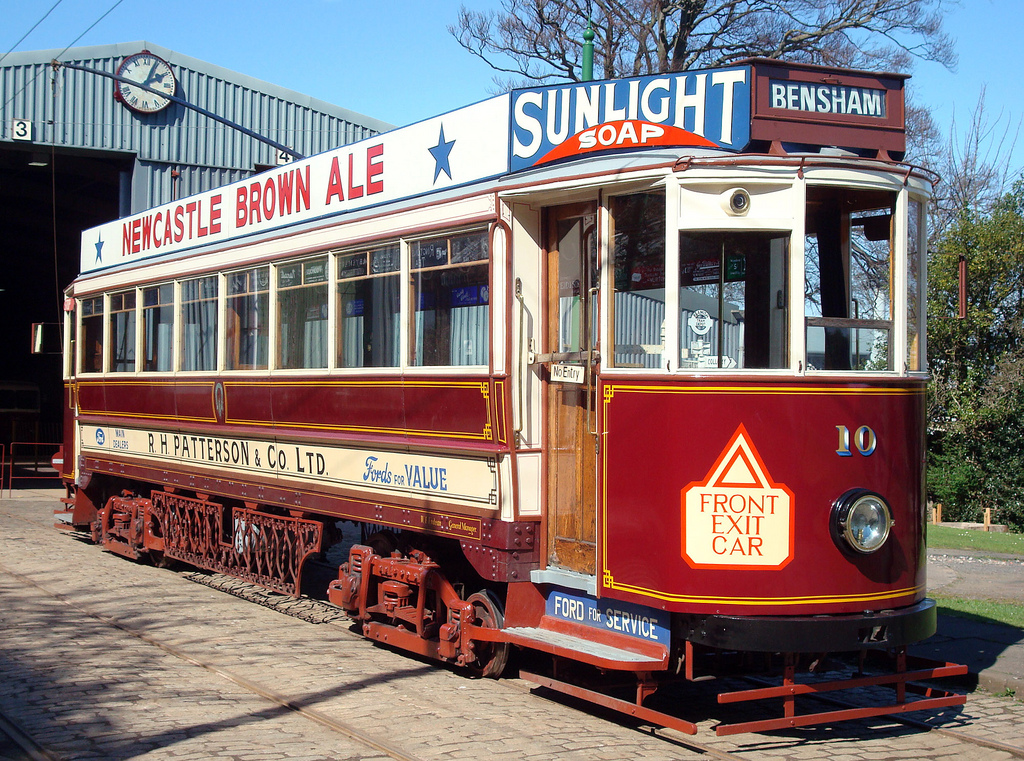 10 is one of a batch of single-deck cars built during the period 1920 to 1928 by the Gateshead and District Tramways Co. at its Sunderland Road works, and itself dates from 1925.  It is 42′ 8” in length and is fitted with longitudinal seating for 48 passengers.

Its equipment comprises a pair of Brill 39E reversed maximum traction bogies with Dick Kerr DK31A 35hp motors, operated from English Electric DB1 K3 controllers.  Air brakes are fitted, which act on the wheels and the track-brakes.  The tram worked on routes in Gateshead and across the Tyne to Newcastle and Gosforth, and has a distinctive arrangement of front exit and rear entrance, denoted by the large triangular notice on the dash panels.

When the Gateshead system was abandoned in 1951, tram 10 plus eighteen similar cars were bought by the Eastern Region of British Railways to work on their electric railway between Grimsby and Immingham.  Painted dark green, and carrying the fleet number 26, it ran until the railway closed on 1 July 1961.  Fortunately the car was retained by the British Transport Commission as a candidate for preservation.

In 1968, in anticipation of Beamish Museum, the Northern Tramway Sponsors arranged for the tram to return to the North-East.  It was restored to its original guise as Gateshead 10 at the Consett Iron Company works, before being transferred to Beamish to inaugurate passenger services on the initial stretch of the tramway in June 1973.

One of its sister trams – Gateshead 5 – can be seen at the National Tramway Museum at Crich, Derbyshire.  No 10 received a major rebuild between 1983 and 1985, and now appears in late 1920s condition, complete with sumptuous woodwork, ornate brass chandeliers, bird’s-eye maple ceiling panels, and etched coloured glass advertisements at the top of the side windows.