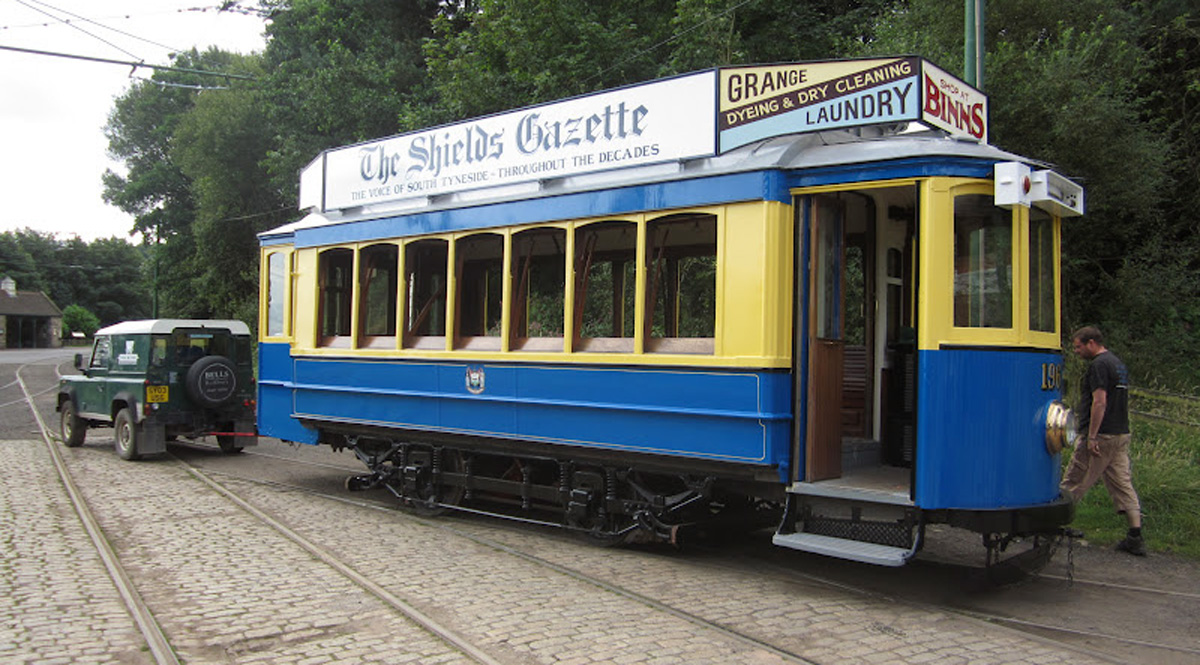 Tram 196 is a small 4-wheel single decker, built in 1935 at the Boavista Works of Companhia Carris de Ferro do Porto (The Oporto Tramways Company) to an American design dating from 1909.  It was one of 77 generally similar cars, although the earlier versions differed in length and/or width.

The tram is mounted on a Brill 21E design of truck equipped with a pair of GE(USA) 270A 55hp motors controlled from licensee-built B54E controllers.  The braking systems include air-brake, emergency electric brake, and a handbrake operated by distinctive vertical hand-wheels to the right of the driver’s position.

Oporto withdrew 196 after suffering collision damage, and it was brought to Beamish from Portugal in 1989.  A number of similar trams of this type have been acquired for preservation in this country and in America, but 196’s destiny initially was to yield spare parts for other tram projects.

However, once its sound condition had been realised, to the extent that it was capable of running on arrival, Beamish decided to convert it to a totally-enclosed car primarily for off-season operation, and to obtain an additional tram (176, in worse condition) for spare parts.

Damaged areas of 196’s body were made good, and the former open-sided platforms closed in, with folding door access on the UK loading side.  Seating arranged longitudinally for 28 passengers was installed, and the richly-decorated varnished wood features restored.  Externally the panel-work was replaced and the original matchwood dashes restored.  The original roof-mounted electrical resistances were replaced by new platform-mounted units, arranged to help to keep the car interior warm in winter.

Although some changes have been made to the destination boxes, and the tram appears in the same livery as No.10, considerable care has been taken to retain the original styling in the alterations carried out  (observant passengers will see some notices still in Portuguese).  Unusual retained features are the 14 saloon windows, whose two halves open by sliding up into recesses in the roof.  196 joined the Beamish service fleet in May 1992.