We were recently sent a selection of black and white photographs by Mr Tony Johnson. Amongst them were these views taken along the old Stanhope & Tyne (plus NER diversion through Beamish) route plied by the iron ore trains. No dates but early 60s seems likely. The general air of grime and filth pervades…

Below: A 9F and ore train is loaded at Tyne Dock. This work was undertaken quickly as the ore ships had to fit into the tidal patterns here. Frantic activity would ensue, to ensure the ore was removed quickly to Consett for smelting. 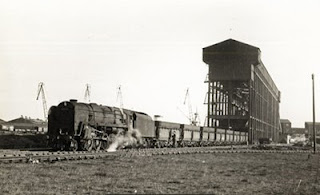 Below: Fireman’s eye view aboard a 9F on the westward climb, possibly in the vicinity of Pelton? Here a banker would be taken on for the blast up to Annfield Plain, through Beamish. Trains were banked out of the dock but ran unaided to Pelton Fell where the harshest gradients started. 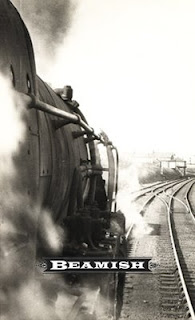 Below: A pause for breath at the disused Beamish Station. This was not a booked stop and it is possible the train has stalled here – certainly the black smoke and blowing safety valves suggest recent hard work. Trains which stalled were split here and run up to Annfield Plain in two halves. Not many images appear from this viewpoint. 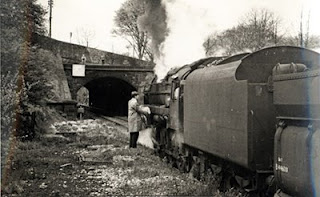 Below: A 9F at rest. The ore allocated engines were distinctive in having twin air compressors mounted on the side of the engine, not for braking but to provide air to the power doors on the wagons. Those interested in this line should look out for a forthcoming title from Middleton Press on the line, currently being prepared by Roger Darsley and featuring a number of images from the Beamish photographic archive as well as the private collection of Ken Swan. 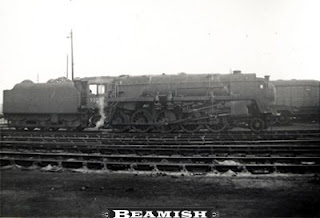