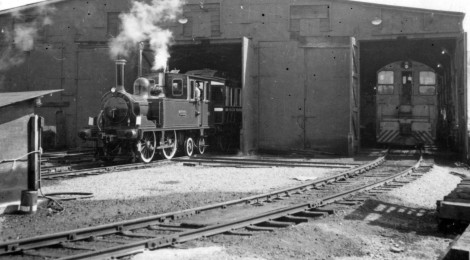 Through the great kindness of Mr Davies of Kamloops, British Columbia, we have been able to add a substantial amount of material to the file on 4085 Dunrobin and its life spent in Canada.  Mr Davies kept his own records, dating back to its arrival in 1965 and concluding with its repatriation to the UK.  There are numerous newspaper reports and a set of very useful photographs, some of which are reproduced here.  What is particularly interesting on first scan of this material is that there is a newspaper report (and photograph) of Dunrobin being inserted into a shop – something I hadn’t really been able to picture, and also a photograph of the engine stripped of paint and under repair at BC Hydro, New Westminster in 1966.  This also shows the front bufferbeam removed and may enable a date to be placed on some of the cylinder repairs carried out that are now evident on the original block.  It also reveals why, when rubbing sections of paintwork back, we could only find primer then bare metal!  Mr Davies also photographed the initial test runs of Dunrobin, with 58A, on the 27th June 1966 and which were carried out between New Westminster and Steveston.  In time it is planned to produce a book on Dunrobin and the Duke’s private coaching stock, and this material has greatly expanded the potential of the section on life in Canada for the engine and coach between 1965 and 2011.  We are extremely grateful to Mr Davies for donating his archive on the engine and coach.