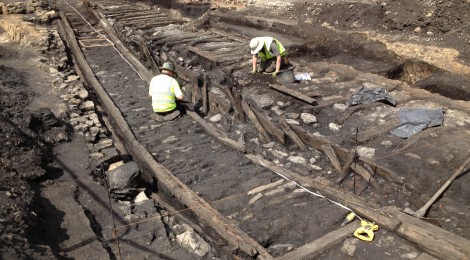 Up on the north bank of the Tyne on the site of the Neptune ship yard near the Roman Fort of Segedunum, archaeologists looking for Roman remains have made a remarkable discovery – a late 18th century wooden waggonway in remarkable condition.  We were invited along to have a look…

Thought to date from the 1780s, the site itself reveals a section of diverging and then apparently re-converging wooden rails, essentially forming a very short loop capable of accommodating two or three early chaldron waggons.  It lies on a north-south axis on the north of the Tyne on the site of the Neptune Shipyard (now being re-developed) and is some height above the river itself.  The western track of the loop is sat in a depression.  This is possibly indicative of it being a ‘kip and dish’ arrangement associated with rope haulage (the height above the river might add some weight to this).  It might alternatively be a wheel wash or sump for cooling waggon brakes or ensuring their wooden wheels (if so fitted) do not shrink (heat could be generated not just from the environment but friction caused by braking as well as rolling contact with the rail head).

The area being excavated is some distance above the river and so could be the top of an incline leading down onto staithes or loading gantries.  The gradient leading away, to the north, is not steep but climbs steadily until being lost in later developments.

The dish is paved in stone and has narrower than the apparently standard gauge (or thereabouts) double height rails, possible as a check/brake rail.  The higher eastern level has a revetment formed of ship planks and is more or less straight.  A mixture of very rough and tree-limb like sleepers and, possibly later, straight cut sleepers are evident, with rails possibly of pine, laid lengthways and doubled up (in the very typical Tyneside practice) where wear was a particular concern for waggonway-wrights.

The immediate surroundings of this section of waggonway remain hidden or have been destroyed in the distant past.  A later wall has bisected part of the lower section, indicating its later construction.  It overlays a wall that appears to be contemporary with the waggonway itself.

The site is adjacent to the waggonway on which the original ‘Steam Elephant’ locomotive operated, part of a dense network of collieries and waggonways in the hinterland of the Tyne in this area.

The site is on private land but can be viewed from the adjacent Benton Way.  Contractor ‘The Archaeological Practice’ is excavating and recording the site on behalf of landowner Shepherd Offshore.

Beamish’s own 200 yard replica wooden waggonway was based on the mid 1990s excavations at Lambton D Pit, and without a doubt the Neptune site is of similar importance and of startling interest to early railway historians and connoisseurs of the north east’s rich industrial heritage.

So – we aren’t sure what it is or what it did but it will no doubt prompt the development of numerous theories and has already become the source of much discussion amongst enthusiasts of early railways and academics alike – a sure sign of a good mystery!

Here is a selection of photographs for those who are interested to study – double click to open full screen.

Below: Looking north, with the fence along Benton Way to the right.  The ‘dish’ is to the left, the raised track to the right and their convergence just beyond along the edge of the excavation.  In the foreground the two lines appear to start to converge again.  The dished area is paved in stone blocks of irregular size, with the most prominent longitudinal rails being double rail-height and apparently narrower in gauge in the middle.  To the outer sides of these are lower rails at a lower level.  Note the revetment in between the tracks (ship planks) and the mixture of very rough and rather straighter sleepers in use throughout. 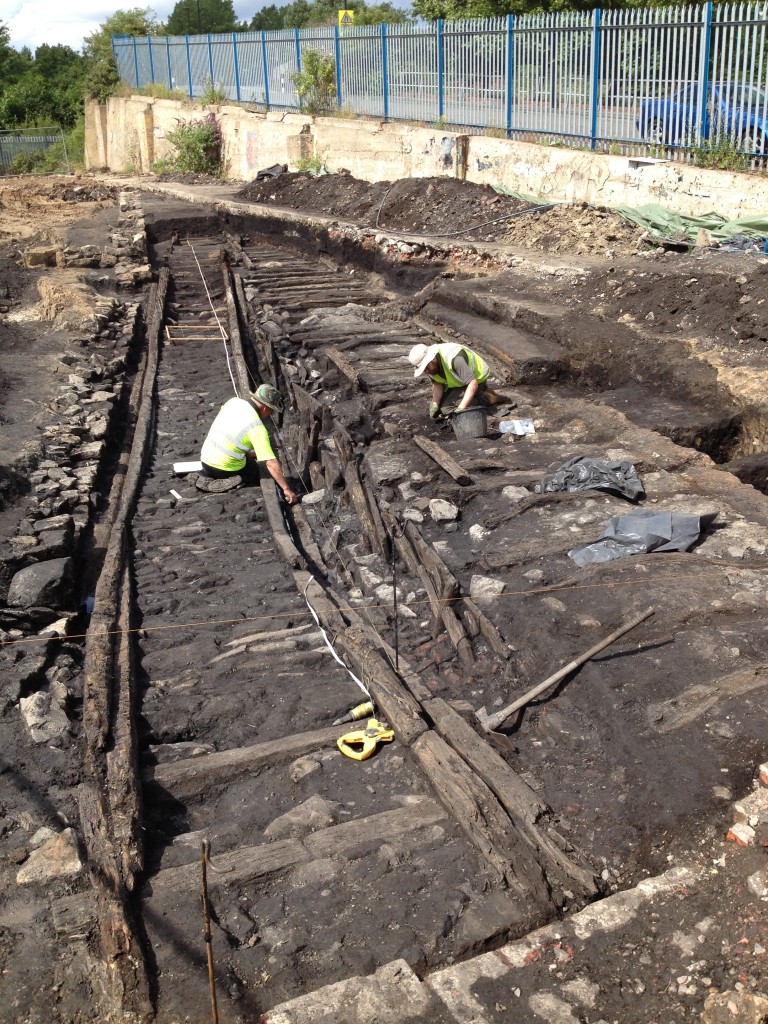 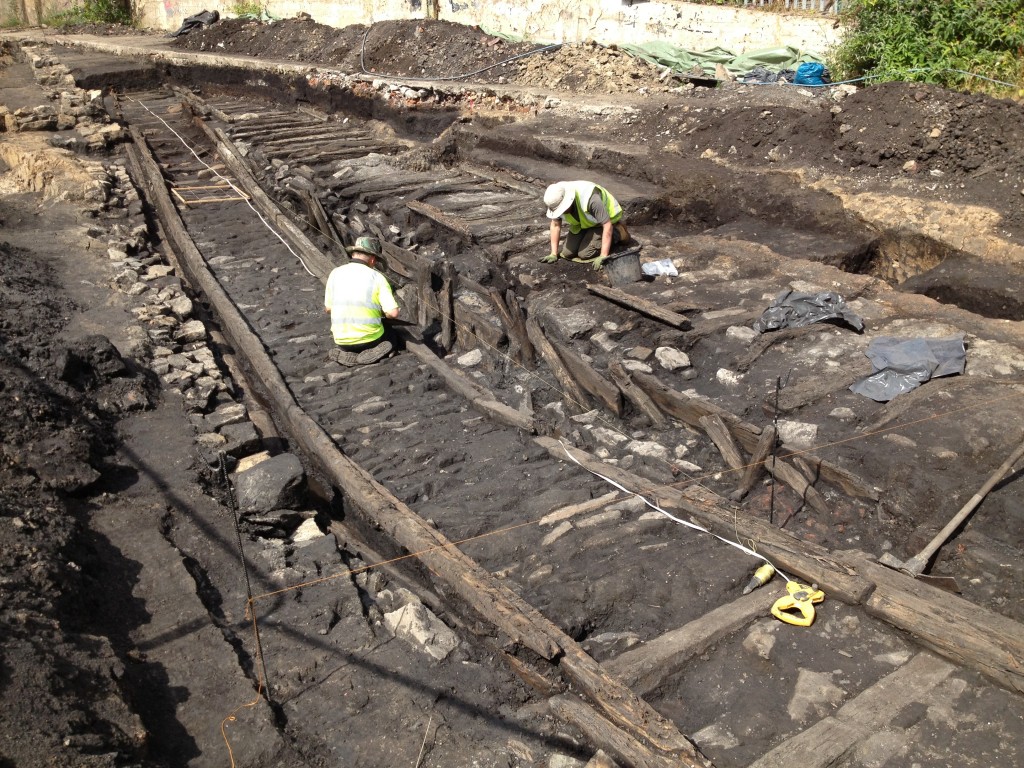 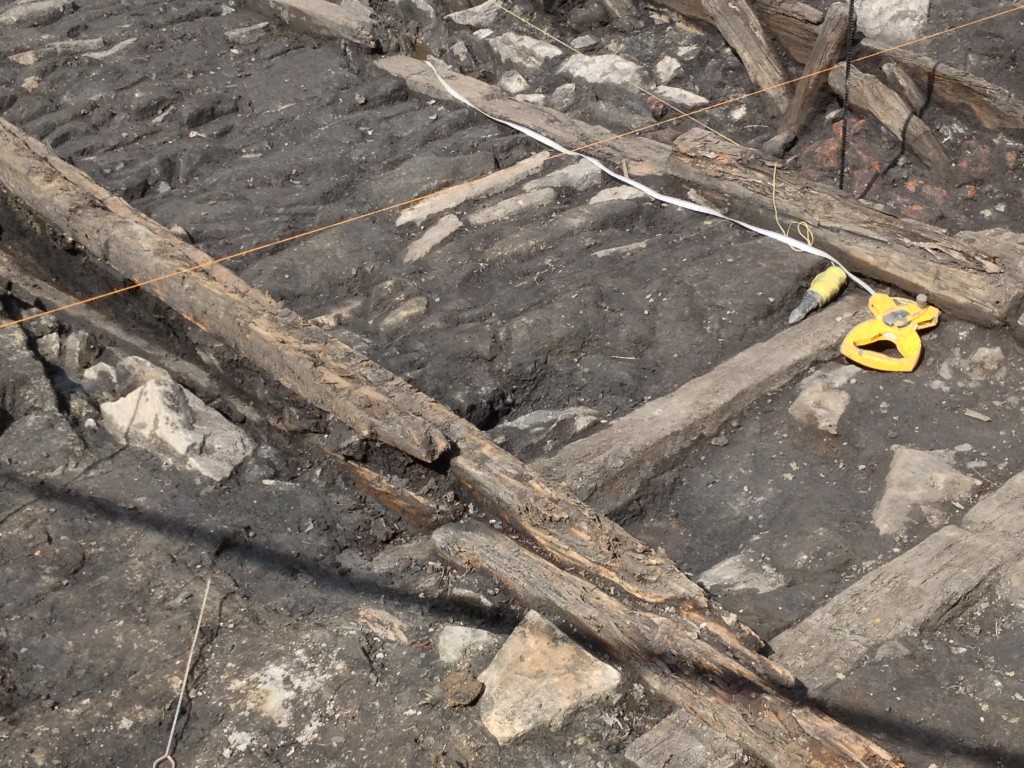 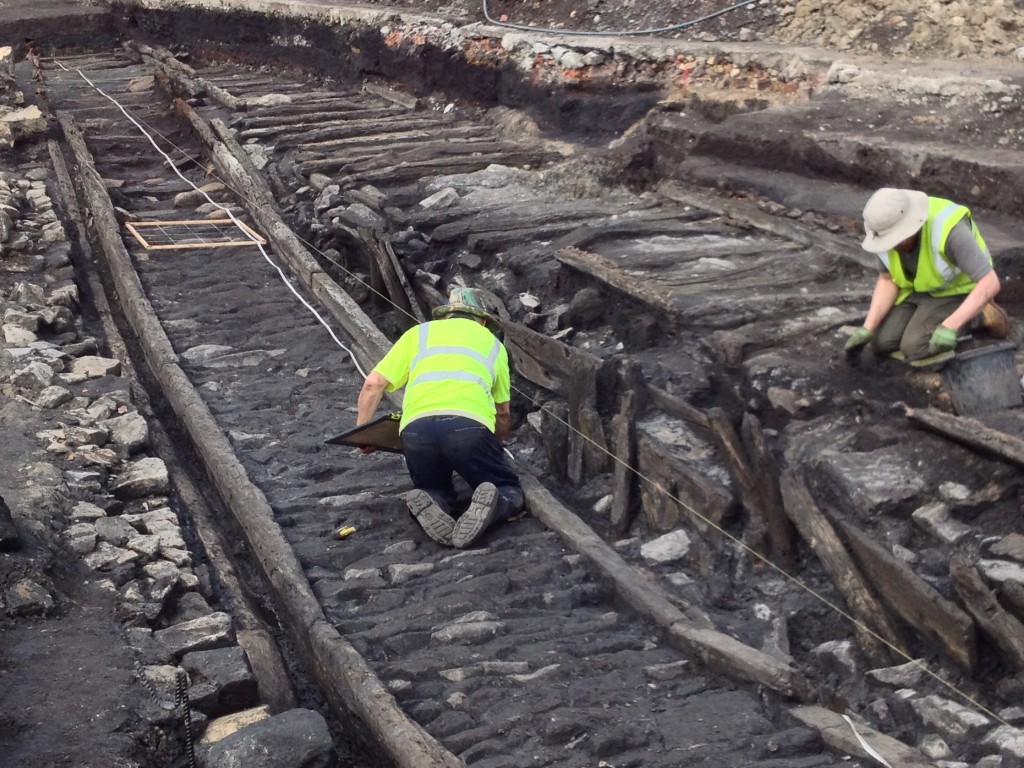 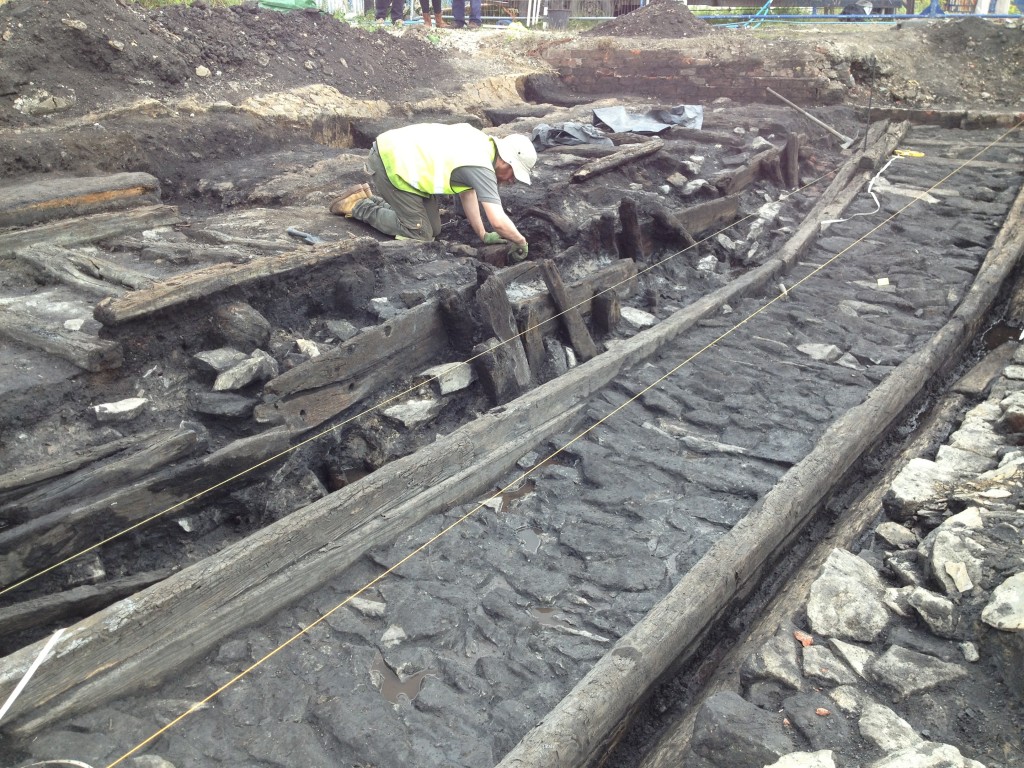 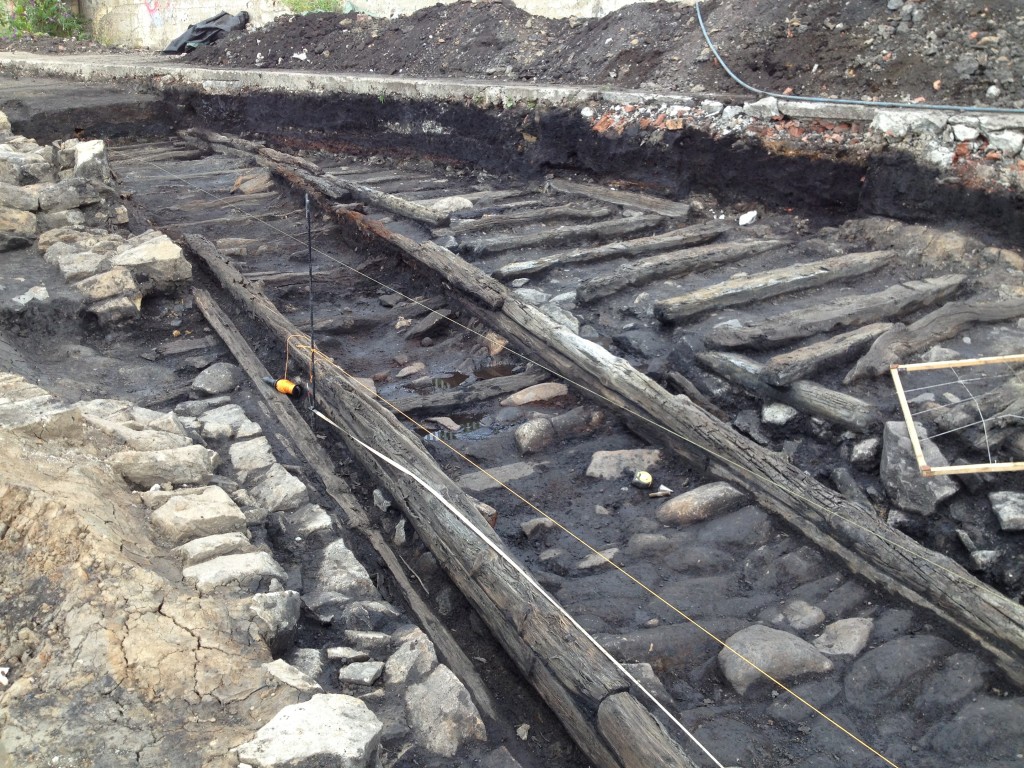 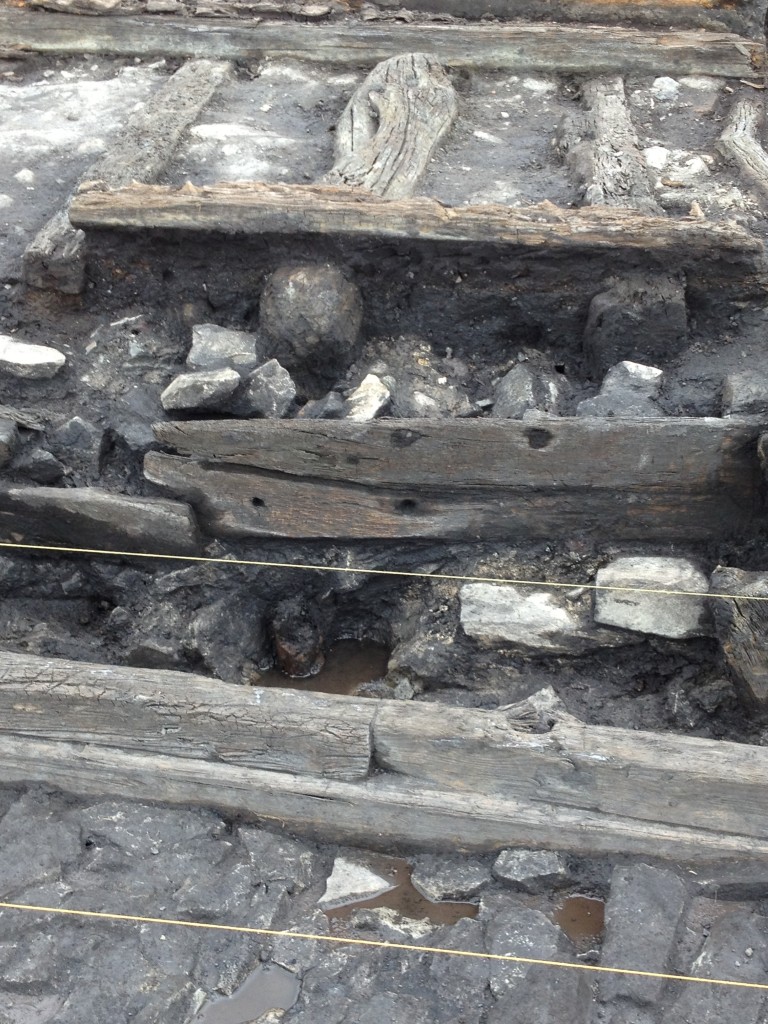 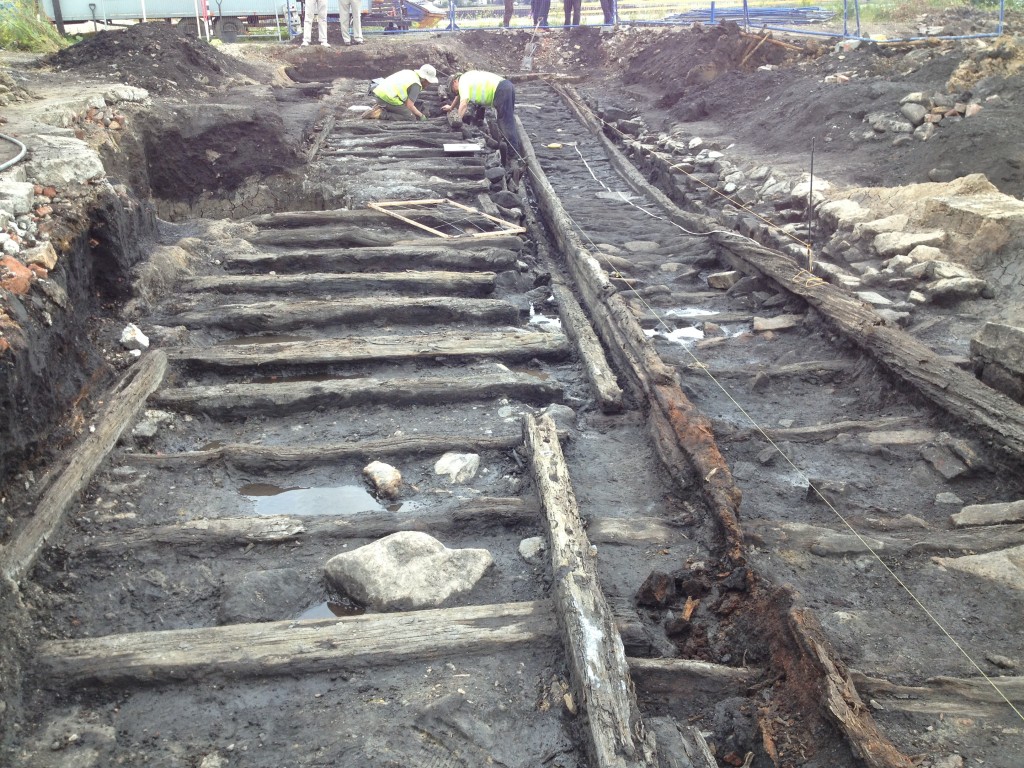