I recently received a CD of images from Brian Tunnard, who has very kindly allowed them to be shared with a wider audience via the blog.  They reveal some fascinating views of the transport collections at Beamish in the early years when the railway exhibits were still being developed.  When we look at our own endeavours, and the mud and disruption, it is comforting to see that it was ever thus and that the results are always worth the effort!

Below: We start with one of the earliest views in Brian’s collection.  Can you recognise this view?  The position of the brakevan (newly arrived from Tyne Dock where it was restored from the surviving components of two NER diagram V3 birdcage brakevans) is a bit of a red herring  – it being stood on what is the present road through the events field.  The location giveaway is the site of reconstruction of the Rowley station building in the middle distance – note the stone laid out between the site and the camera position.  The creation of embankments, digging of cuttings and general sculpting of the landscape in this area reveals how much work has taken place to re-shape the site of the Museum over the last 40+ years. 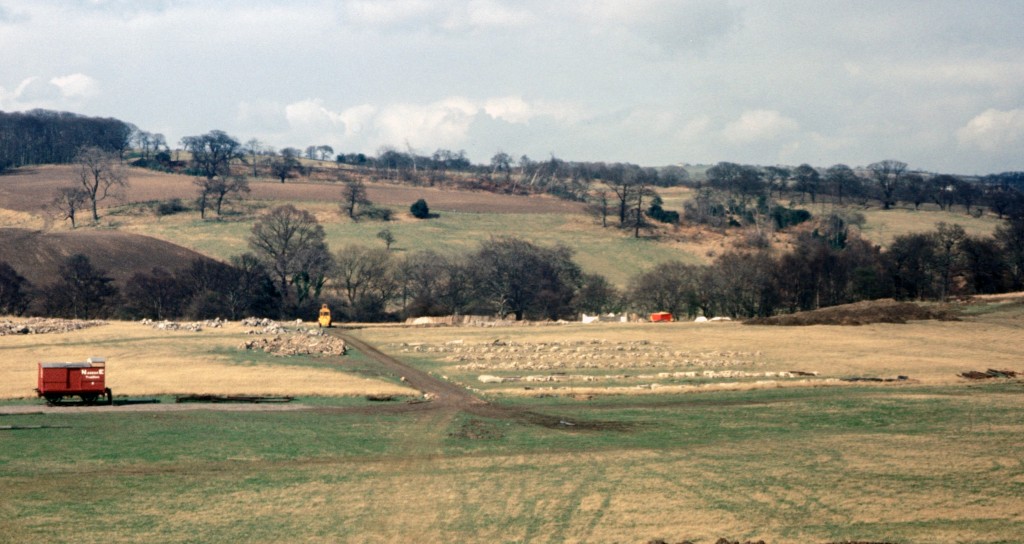 Below: The station building in a more advanced stage.  It is constructed on a substantial raft of concrete, its location atop the bank above the Beamish Burn being otherwise precarious.  Note the line of ex NER coaches, which had arrived from the NCB at Ashington where they gained certain infamy as part of the miners trains on the system linking the pits in the area. 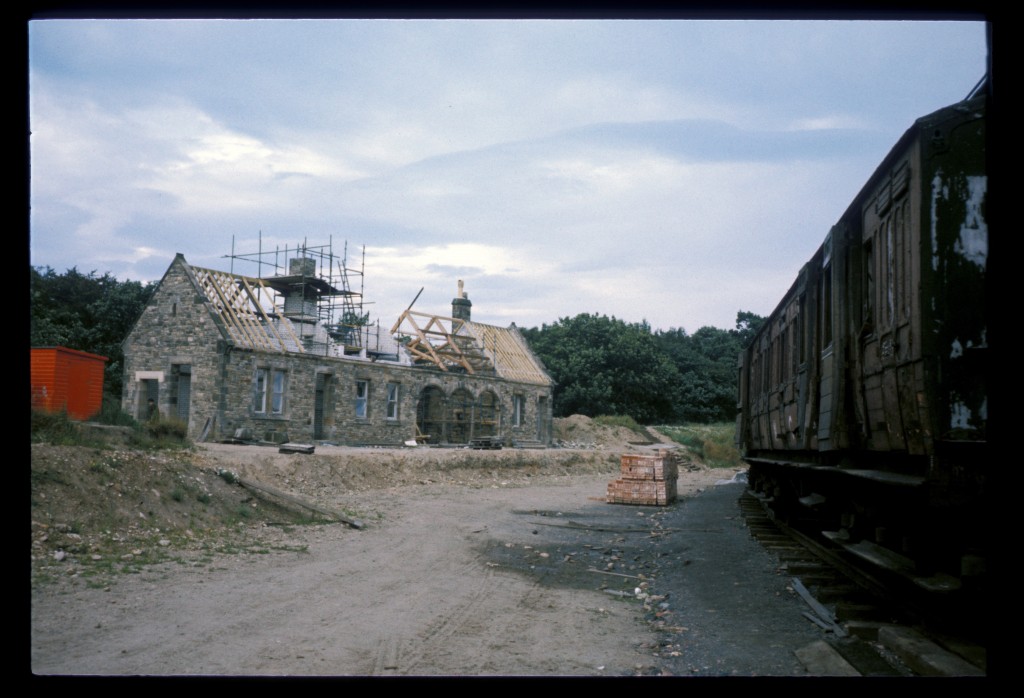 Below: Another look at the coaches.  Three clerestory coaches are visible, plus the snowplough and one of the elliptical roof suburban coaches (of which there were two preserved).  One of the clerestory coaches was dismantled to provide parts for the restoration of 3071 (which still erroneously carries the number 818).  The others were included 118, which has been retained in store (a 3rd class compartment coach with elliptical roof) and two have been transferred to the Tanfield Railway (including the real 818).  118 remains in store at Beamish awaiting eventual restoration, and a healthy stockpile of components for this is still being actively gathered pending its long-term turn for attention. Below: This view shows the covered wagon which was lost to an arson attack, adjacent to the ex Consett steam crane E No.1 and Malleable No.5 (at this time still nominally a working locomotive).  The location is to the rear of the Town, where we presently load/unload rolling stock for use at Rowley. Below: As has been well documented on this blog, Coffee Pot No.1 enjoyed a very brief spell of operation in the mid-1970s, following transfer from Head Wrightson in 1971. It is presumed that the livery was fictional, and the boiler was the fourth carried, fitted at Betchworth Qurry and believed to be a second-hand industrial vessel. Below: We ought to take this view again!  No.18 plus No.1, both in steam behind the Town.  I am told they had to share some components, such as cylinder lubricators, so this may be quite a rare view.  Both look substantially different now of course, and are perhaps rather better representative of their own history than their late 1970s guise suggested! Below: A close up of No.18 (Lewin).  Some very precarious fittings are evident here! Again, the history of this locomotive is well covered on the blog and more info can be found under the ‘Articles’ banner heading. Below: A view that has little changed, an overall view of the winder with the ex Ravensworth heapstead under reconstruction.  This was later reconstructed to correct some flaws that became evident. Below: A rare view of R. Stephenson 0-6-0T ‘Twizell’ during its sojourn as static boiler for the winder.  Note the boiler feed pump on the buffer beam – a substantial improvement on previous practice to run it a pressure low enough to enable the boiler to be filled by the water pressure in this area – all very well until a series of toilets were plumbed in to the same system and resulting demand led to a pressure drop and the engine’s boiler charging the water system (and therefore the toilets!) with steam!!! Below: A fascinating overall view of the Colliery Yard, note Francis Street in the middle distance.  No engine shed at this time and a different track layout is apparent.  Note the large drum in the middle right – this is the fan from the Waddle Fan – with No.18 to the right of this.  Lots of chaldrons can be seen and also the Ruston 88DS diesel shunter in the foreground (since disposed of to the Bowes Railway). The cab at the front of this view is Twizell’s. The excavation work seen is probably the installation of the main drain in which the Burn opposite Home Farm was routed into an underground culvert, taking a route beneath the embankment created for the tramway, then across the front of the school before heading towards the middle of the site and into an open burn which then tunnels under the tramway again before entering the Beamish Burn. Below: Rowley Station with Twizell (freed of its Colliery role) and the J21 in steam. Below: Between repaints, the J21 runs onto the curve behind the Town area. Does anyone know the reason for the flower garland?  It is possibly 1976 and the formal opening of Rowley Station by John Betjeman. Below: With full NER livery restored, 876 (or 65033 if you prefer) is seen at Rowley in the company of the Forcett Coach, fresh from restoration in 1975 at Shildon Wagon Works and subsequent participation in the Stockton & Darlington Railway 150th anniversary celebrations that year.  A view we can recreate on day once the loco is restored and the coach recommissioned (with continuous brakes to enable it to operate in passenger service  legally!). Below: Another Colliery view showing Locomotion No.1 in steam, framed between the Ruston diesel shunter and the coal wagon (believed to be an ex NER 8ton dumb buffered example) that was used as a loco coal facility.  It was in poor condition then, and subsequently broke its back, deteriorating beyond effective restoration.  Parts have been used in other projects though, including cut-down corner plates on the box chaldron built in the RHEC two years ago. Below: We move to Home Farm, after the addition of various buildings.  Of interest is the pale blue water cart, now restored with a spray box and shortly to take its place in the new Council Depot.  The box was missing when we restored it, so it is pleasing to see it as present in this view and that what we recreated was the same as what had been fitted! Below: The ex Glasgow Subway cars have been seen on the blog previously – they were obtained for their electrical equipment and were dismantled to provide this for various tramcar restorations – there was never any plan for their operation at the Museum! Many thanks to Brian for scanning and enabling the use of his photographs on this site.  I’m always glad to hear of other collections like this – please do get in touch if you have anything similar that you would like to share!