News from the Fairground and Colliery

Regular, visitors may have noticed the lack of steam at the Fairground this week. This has been caused by a broken stud in the fire box fire-space. The stud, one of four, which holds the fire bars in place was found to have sheared where it projects out of the inner firebox wrapper in which it is fitted. This resulted in the front right hand side of the fire not being supported.

In most engines this replacement would be a relativity simple process of removing the old stud, clean or re-cut the thread, and replace. However, the Galloper Centre Engine has a very small fire box with an even small fire hole door. 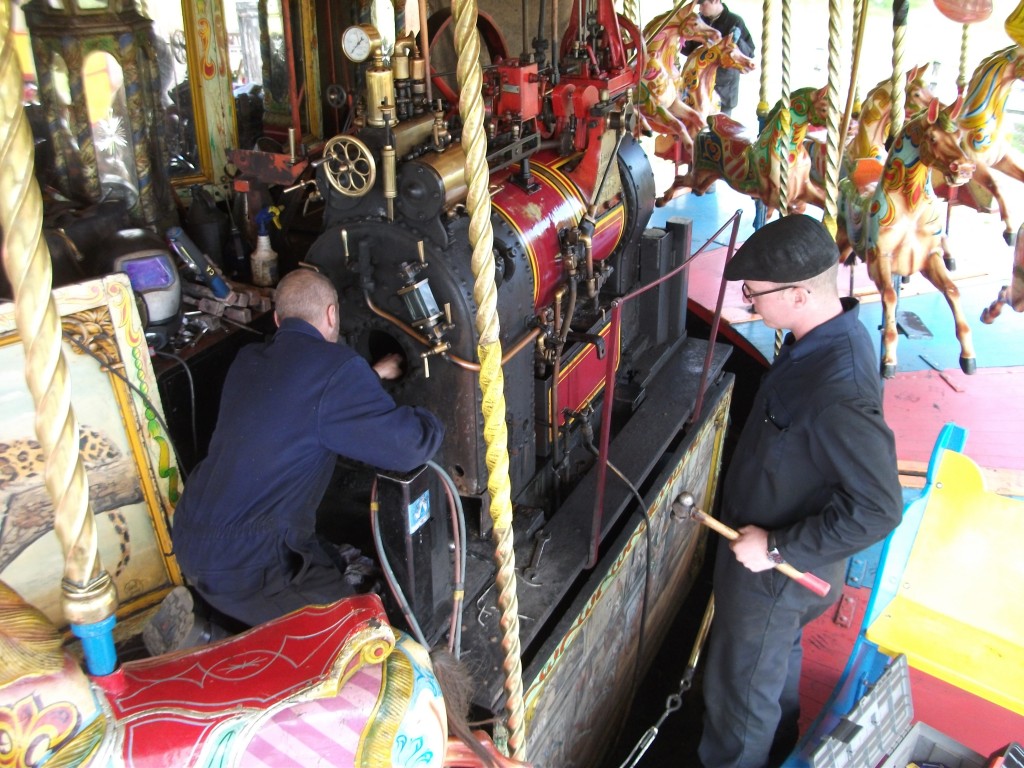 Dave and Chris trying to see what they are doing. The small fire hole door not providing good access!

Dave G and Chris have spent the week developing techniques to complete the job. Chris has carried out much of the work using a mirror to be able to see the job. As the broken stud is at the front of the fire box there is no easy way to see it. 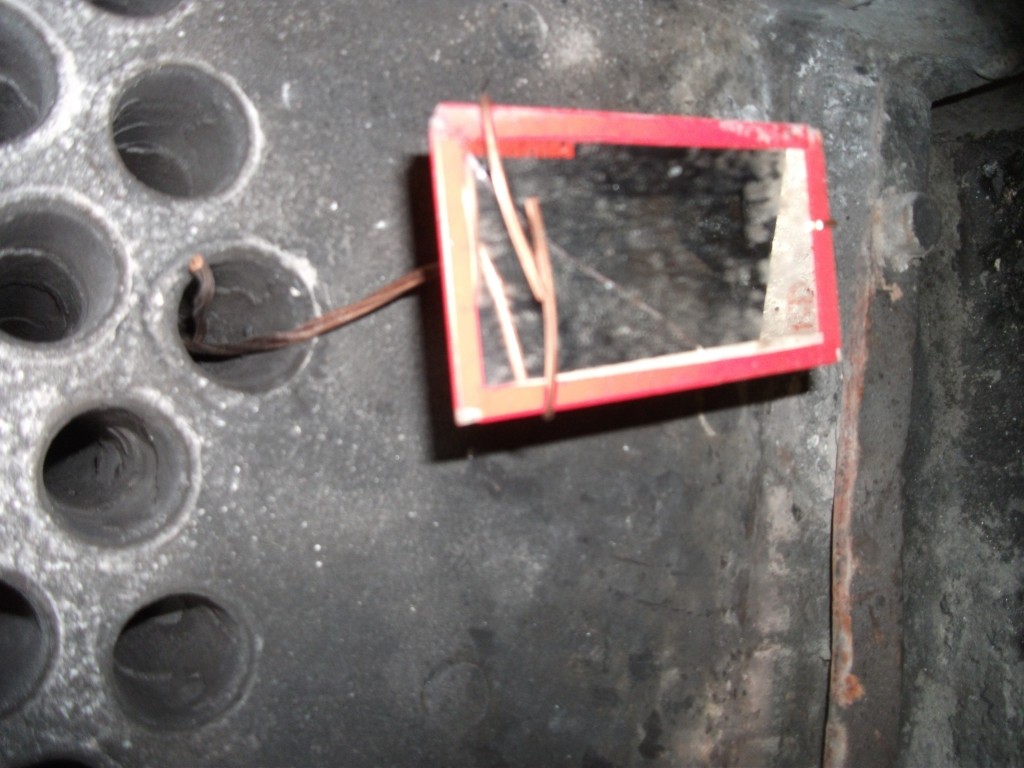 A mirror placed in the tubes to allow Chris to see what he was working on.

Once the stud was removed the tricky work of drilling and tapping the hole began. the small space, once again, posed a problem. The limited space ruled out any use of electric drills or standard ratchet drills. to overcome the problem Chris created a ‘made to measure’ ratchet drill, which can also be converted to carry the tap, for thread cutting. 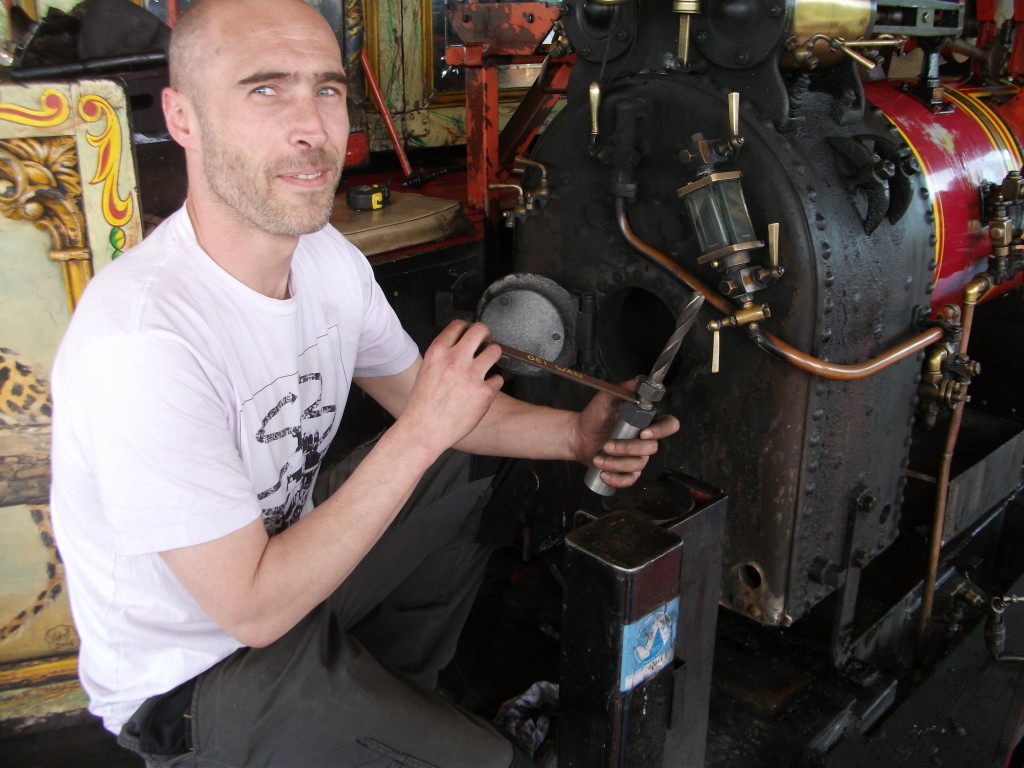 Chris with the newly made ratchet drill

The RHEC and Maintenance Teams are used to dealing with out of the ordinary situations  and jobs. This has been a good example of the skills we now have to keep the museums historic engines, machinery and exhibits running. 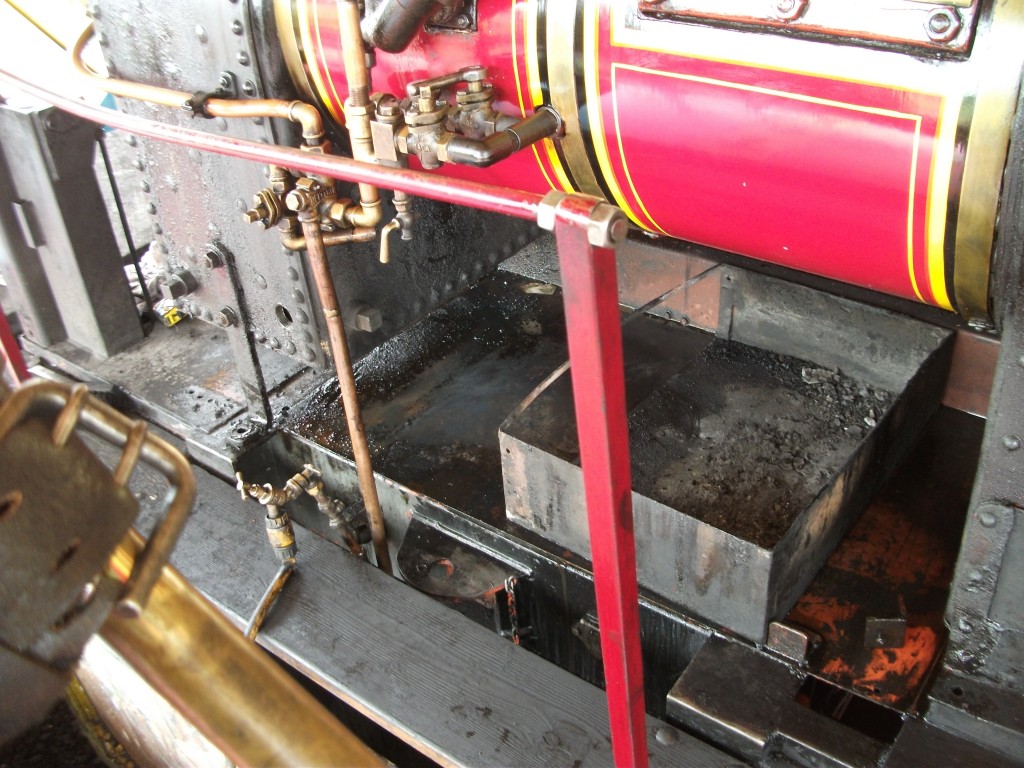 Much of the pipe work, water tank and ash pan removed to improve access

At the Colliery our Blacksmith, John, has been busy carrying out a number of jobs. These range from making hooks for the Gardening Team to hang their spades on to brackets to carry telephone cable, being installed by our Beamish Telecom Volunteers. 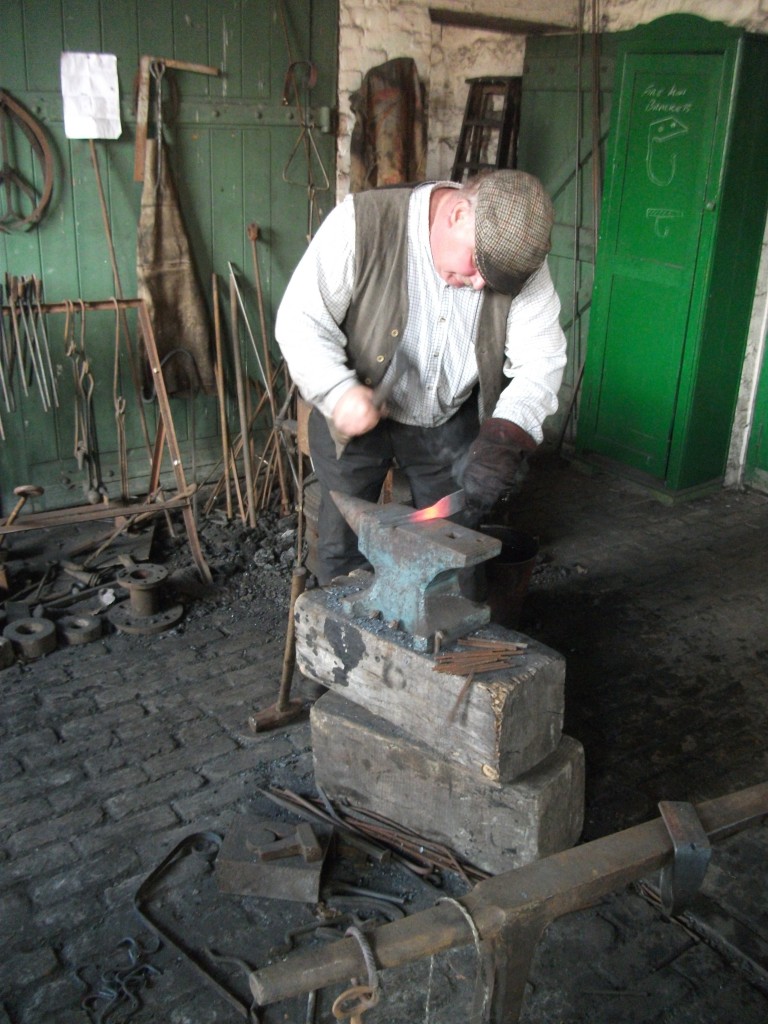 John has also created a small range of items to sell at the forge. All of which, from toasting forks to fire pokers and paper weights, has proved to be very popular with visitors. 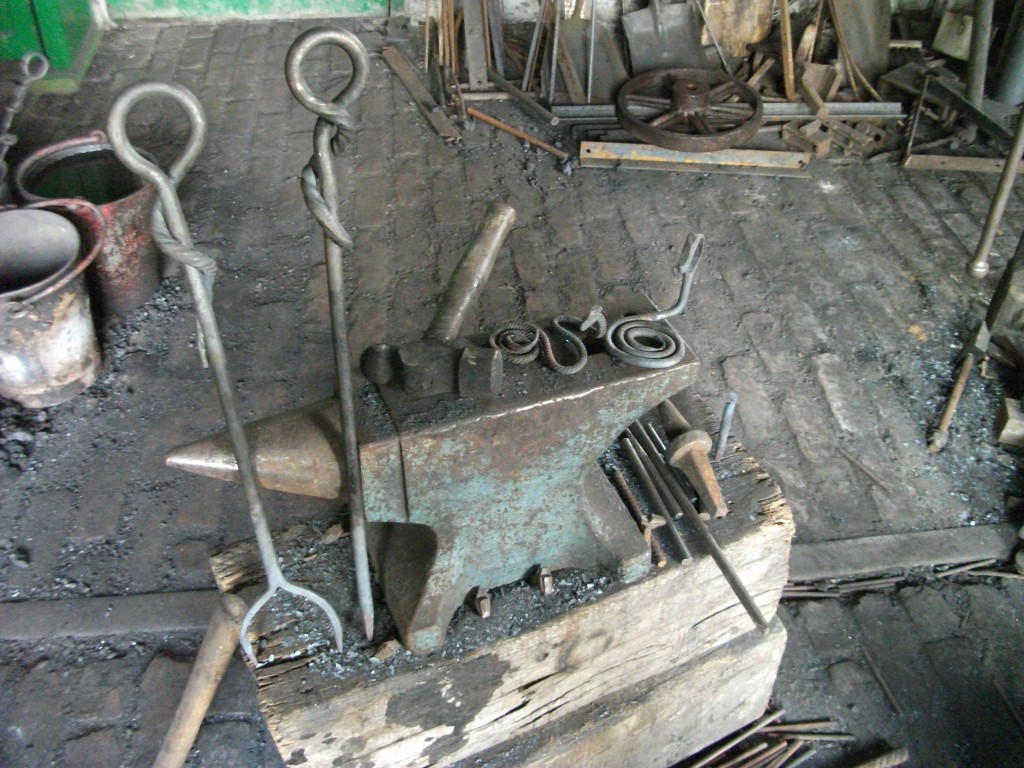 At the Drift Mine a little bit of history has been made this week with the transition to electronic gas detection. As our drift mine is connected to the old Beamish Colliery workings we are still required to carry out tests twice a day to confirm no gas is present and that oxygen levels are satisfactory. For the last 200 years these test have been carried out using Flame Safety Lamps. Although modern electronic Gas detectors have been available for many years the use of Safety Lamps has remained mandatory, even if electronic testing was used alongside. The 3rd June 2015 was the last, official, gas test carried out with a Lamp at Beamish and thus the Northern Coal Field. 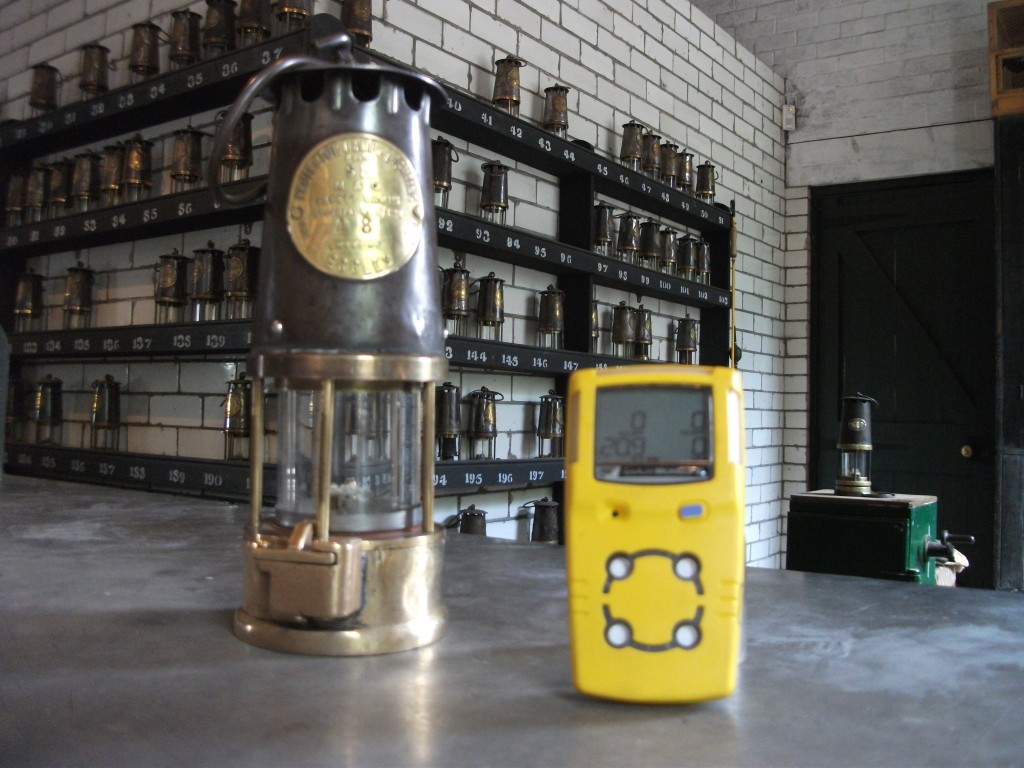 The old and the new.

As there are now so few coal mines left in the country and as most mining legislation dated from the 1950s, NCB, era the Health and Safety Executive began a review of Mining Legislation. This resulted in the issue of the 2014 Mining Regulations in April of this year. As a result many of the rules and systems have been simplified, abolished, or brought into line with general Health and Safety Legislation.

One of the abolished parts of Mining Regulations was the use of Flame Safety Lamps. The Drift Mine Supervisors have continued to revive training and certification, every three years, in the use of Flame Safety Lamps. This training has been carried out at the Mines Rescue Training Centre in Nottinghamshire, as our local Mines Rescue Station at Houghton-le-Spring no longer offered Safety Lamp training.

To comply with the new legislation Beamish and Mines Rescue Ltd have developed a bespoke training course for Museum Staff.  This covers First Aid, Casualty evacuation and atmospheric testing with an electronic multi gas detector. As this does not involve the use of lamps staff are now able to return to carrying out their training, and three yearly refresher, at Houghton Rescue Station.

Although staff will continue to carry safety lamps and  demonstrated them in the Colliery Lamp Cabin – in this the 200th anniversary year of their invention – they will no longer be a mandatory piece of equipment at the Drift mine, or in the few remaining coal mines of the UK.