We start this week’s post with news of a new arrival in the shape of a Doxford Crane Tank.  This example is Roker, and whilst non-operational (and with no plans to restore it to steam) it fills an important gap in the collection at Beamish and allows us to present one of the most iconic designs used in the region and one which gained a certain fame due to their long working lives and use into the 1970s at the famous Doxford shipyard on the River Wear.

Below: “I’ve been after one of these for years…” a quote of my own!  A Doxford (Sunderland) Crane Tank has been on the ‘wish list’ for many years now and thanks to the Foxfield Railway in Staffordshire, one has come to Beamish on extended loan for display in the Colliery Engine Works.

Roker was built (or more likely assembled from older parts) in 1940.  Bearing the works number 7006 it was a product of Robert Stephenson and Hawthorns in Newcastle and was one of several similar crane locomotives, including 9 others of similar design that works at the Doxford yard moving materials from the reception areas to the slipways where ships were constructed.  The loco was withdrawn from service in 1971, initially being part of a scheme called the Dalescroft Railfans Club. It later moved to the Foxfield Railway in 1974 where it was returned to service.

All of Doxford’s locomotives were what might politely be termed ‘tired’ when withdrawn, having lasted until 1971.  The basic design was a Hawthorn Leslie one, and the parts for Roker and sister locomotive Hendon were actually part of a cancelled order dating from 1918 – they were stored until assembled under RSH ownership in 1940 for William DOxford and Sons.  Hendon was later saved from a scrapyard in Blaydon and now resides on the Tanfield Railway.  Millfield (dating from 1942) is at Bressingham Steam Museum and Southwick (another 1942 example) can be seen at Ingrow on the Keighley & Worth Valley Railway.  Pallion was also saved for the same scheme as Roker, but when this foundered the locomotive was eventually scrapped.

The design of the crane is interesting in that the elevation of the jib is done using the pressure within the boiler, only the slewing being done by a separate steam engine.  The jib could also be depressed downwards.  Because of this, the hooks on the jib were fixed, being positioned for lifting various weights up to four tons according to their distance along the jib.  This obviated the need for a winch and drum or separate engine for operating this.  The jib was raised and lowered using a piston at its rear, working within a cylinder atop the boiler (itself notable for the vertical circular firebox which also forms the base of the crane).  Steam pressure from the boiler was constantly fed to the top of the piston, the lifting/lowering being achieved by admitting steam to the underside.  If steam was admitted, then the piston would be in equilibrium and the weight of the jib would cause it to lower.  By exhausting steam from the underside of the piston, the boiler pressure would act upon the top and so cause the jib to be raised – this enables any position to be positively locked and a very precise control to be exercised over the lift. With the engine out of steam the jib would be inclined to settle downwards, so the chimney provides support for the jib at the front end. 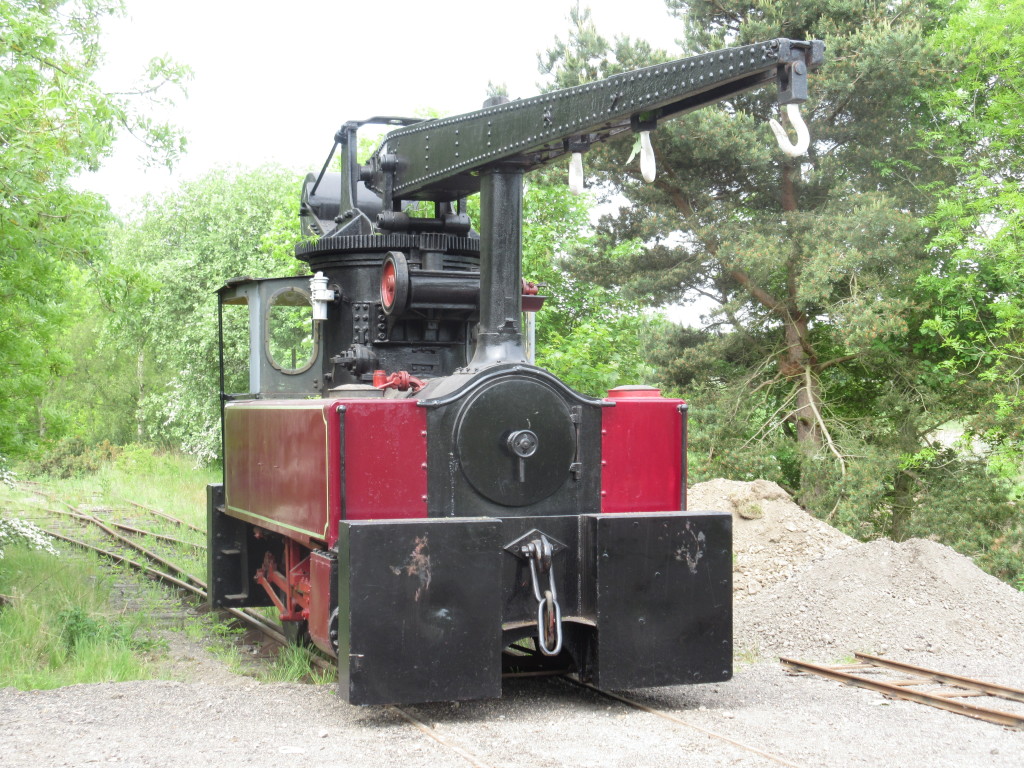 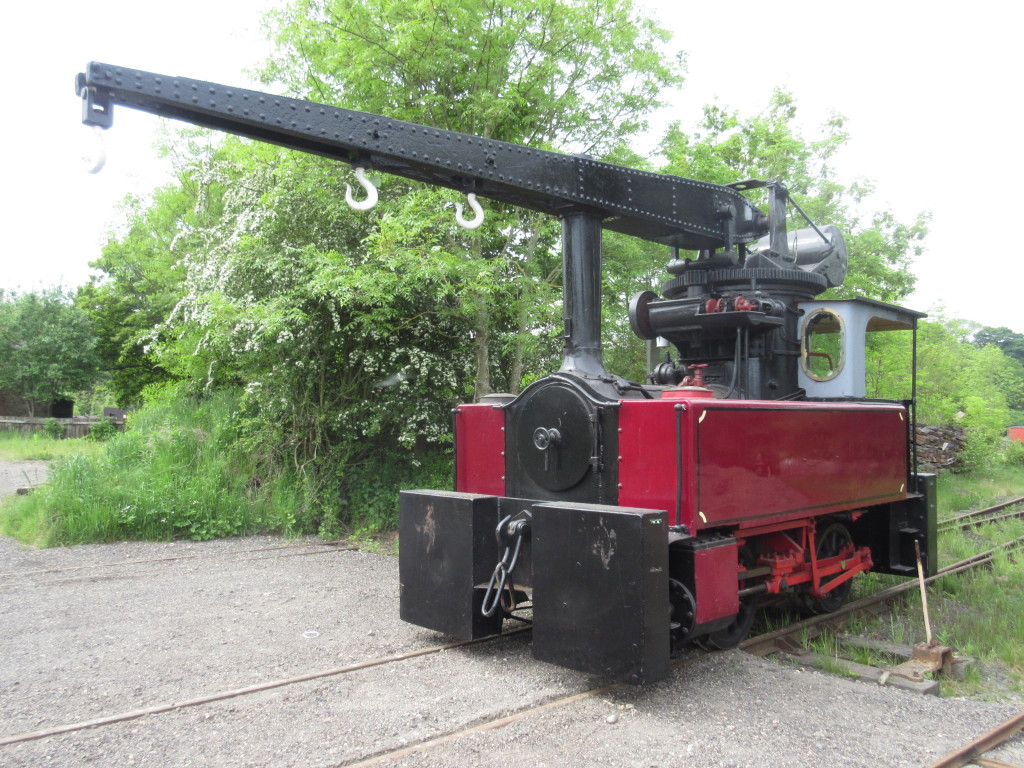 Below: The engine is unusually fitted with Joy valve gear, seen here.  The maroon is thought to be an early shade of colour applied – based on paint fragments found on the superstructure many years ago – this may relate to the cancelled order that led to the parts being stored for so many years.  Doxford livery was green and this will be restored to Roker in due course… 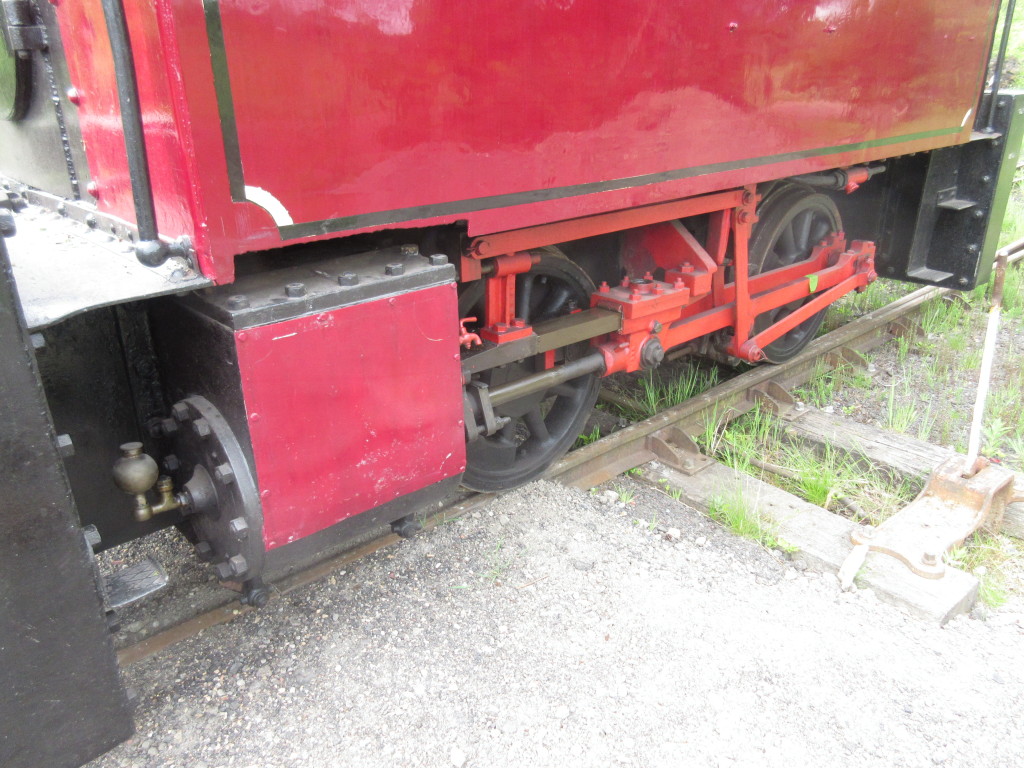 Summer days on the Tramway…

Below: The regular tramway service doesn’t feature often here, so to redress this I’ve included some images taken on the phone on Tuesday of this week as we sweltered in beautiful summer weather.  I was in some of the less visited parts of site – so there are a couple of differing views to the usual here… 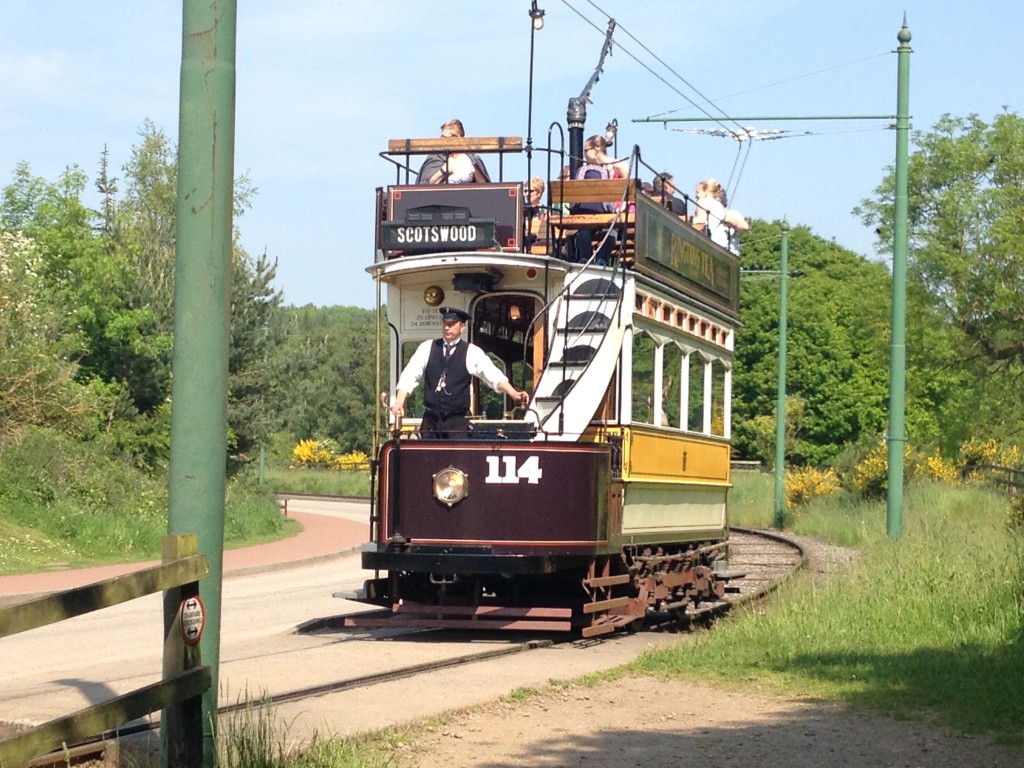 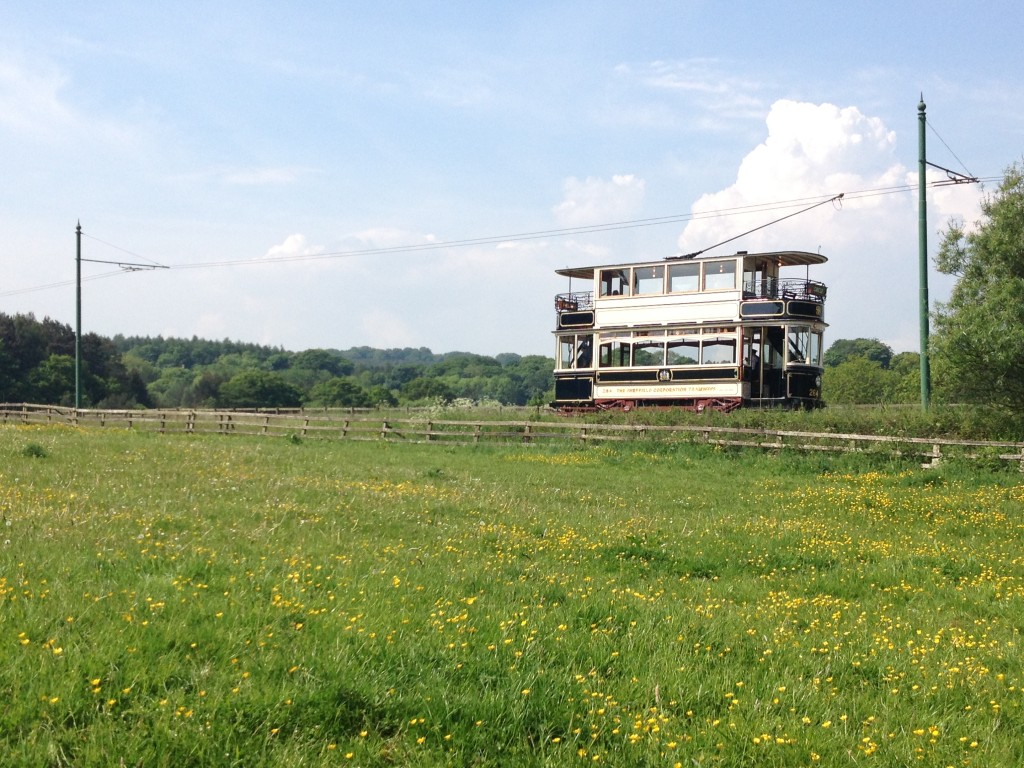 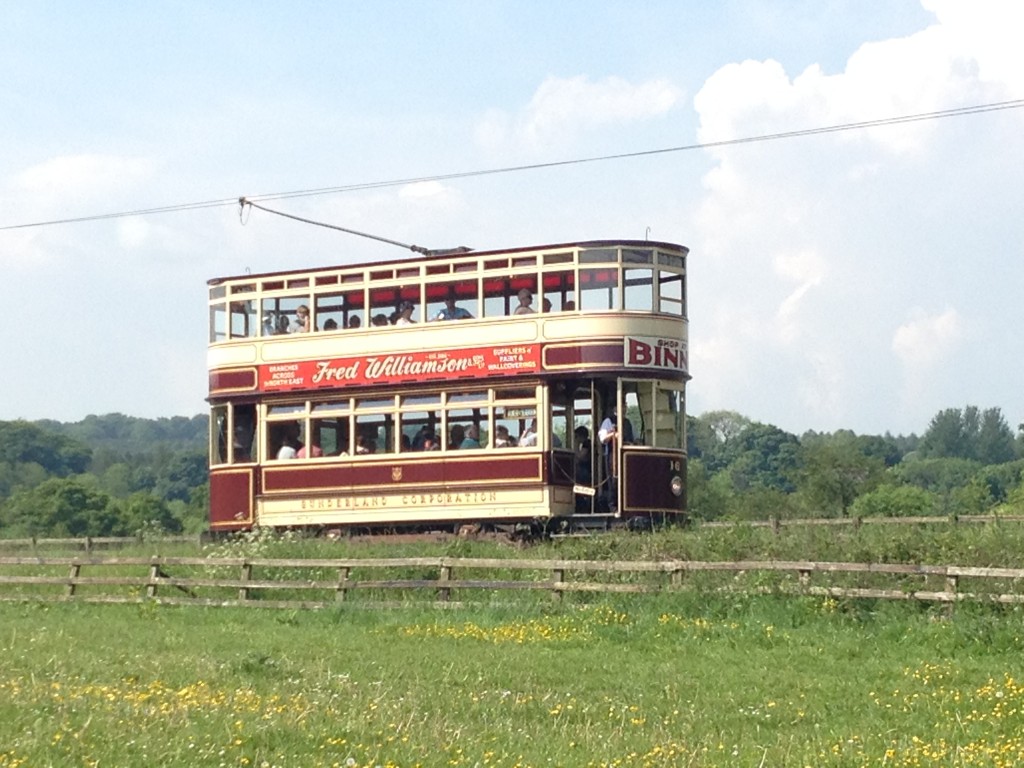 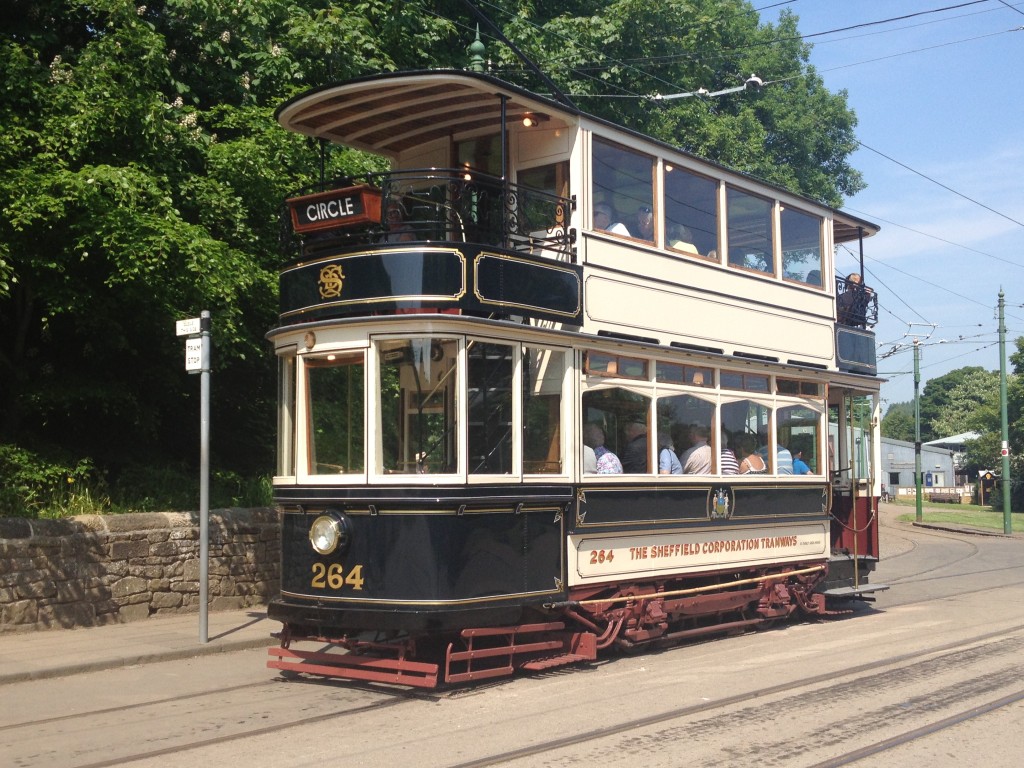 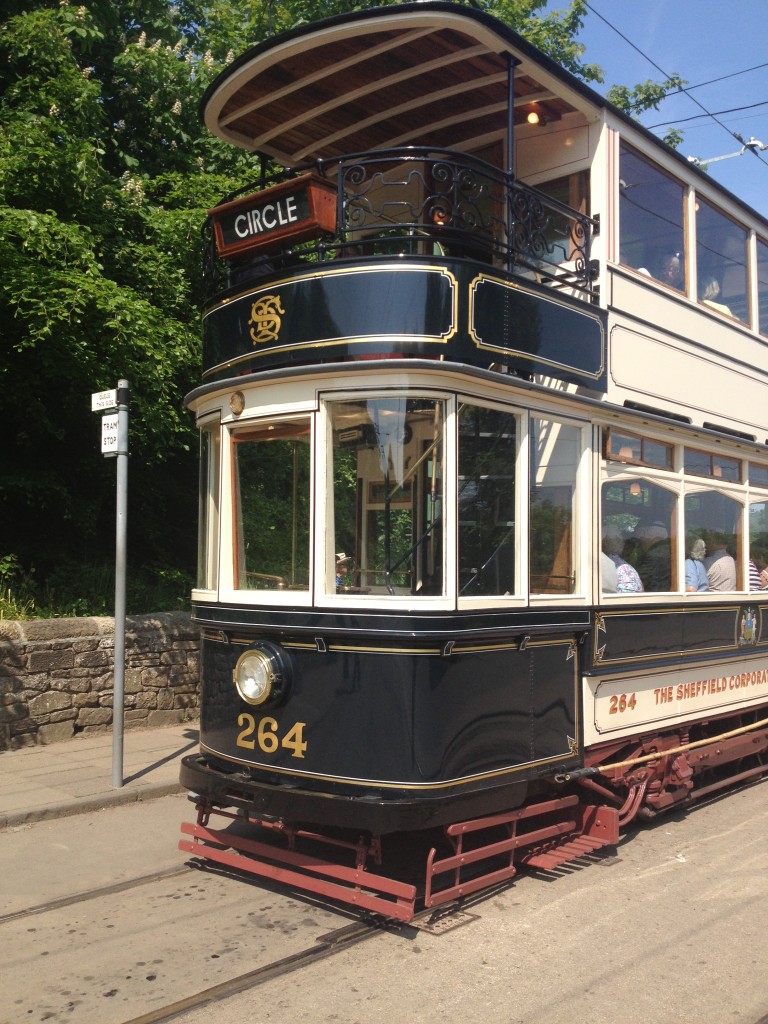 Below: Even in the sweltering heat the maintenance of the site continues.  Ian and Danny are continuing to fit the new door frames and doors to the back of Francis Street.  This also includes coal/out house buildings.  The Friends of Beamish Saturday volunteers have greatly assisted this work by manufacturing doors and frames and the painters have kept up with the work, preparing the paintwork before the new timber is taken out onto site for fitting.  Francis Street is very nearly complete, with the dorma windows and numerous other works being completed.  The front yard gates are now being attended to, with the whole row looking the best it has for very many years. 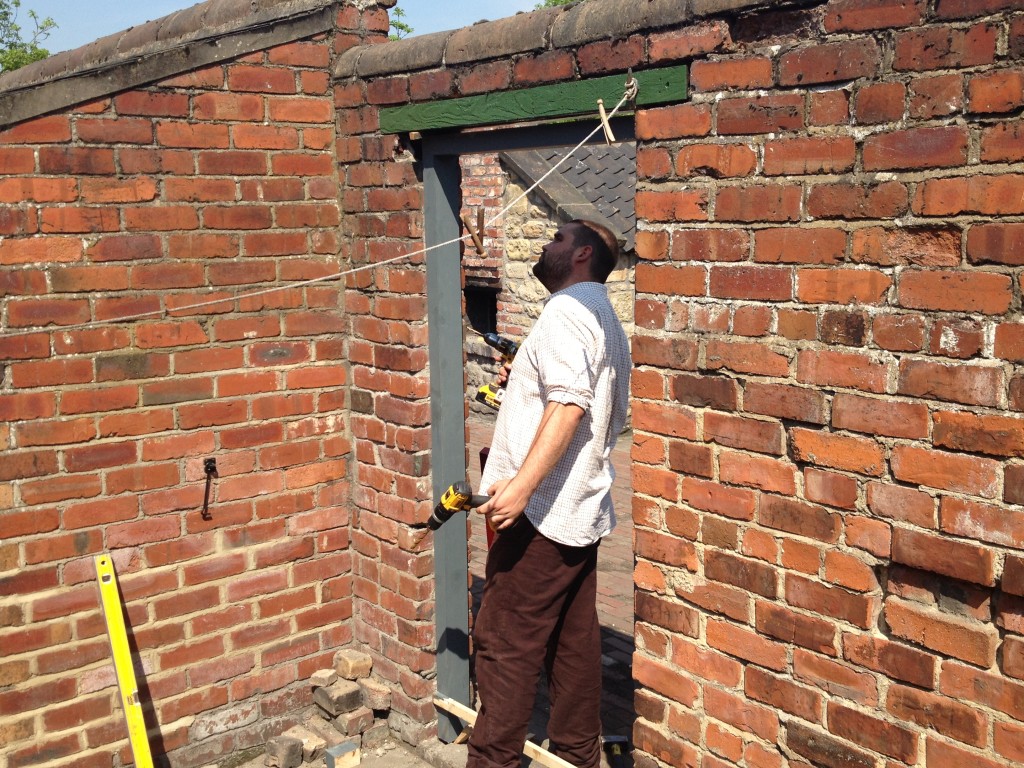 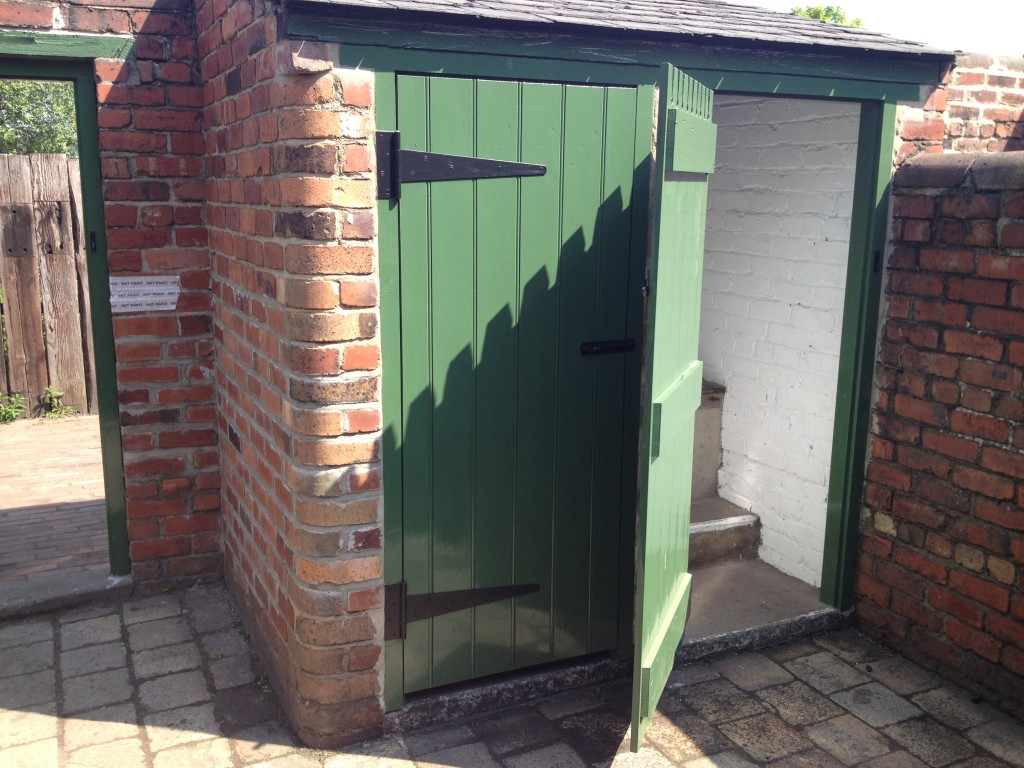 Below: This interesting object turned up during some collections work in one of our stores.  It is a pump, made by Tangye, who produced stationary engines.  A substantial casting mounted on a wooden barrow, the actual purpose of this object is not yet apparent – some research required…  The pump action is oscillating and seems to be activated by the projecting shaft to the rear, above the cast lettering.  It will be cleaned up for eventual display somewhere appropriate on site. 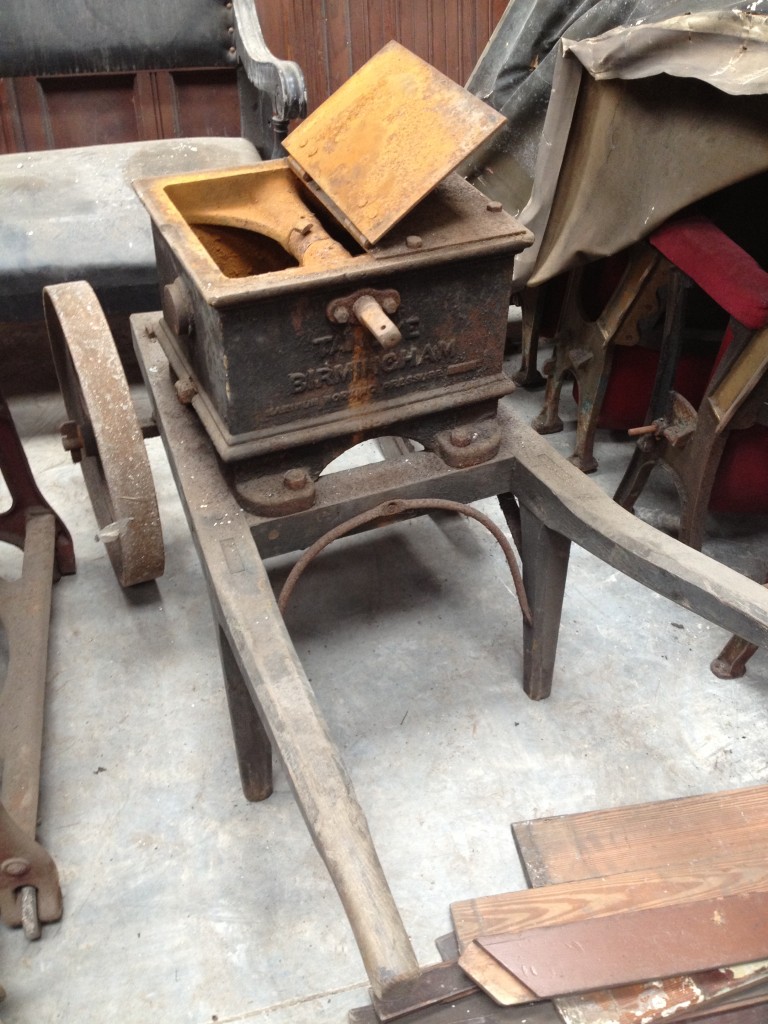 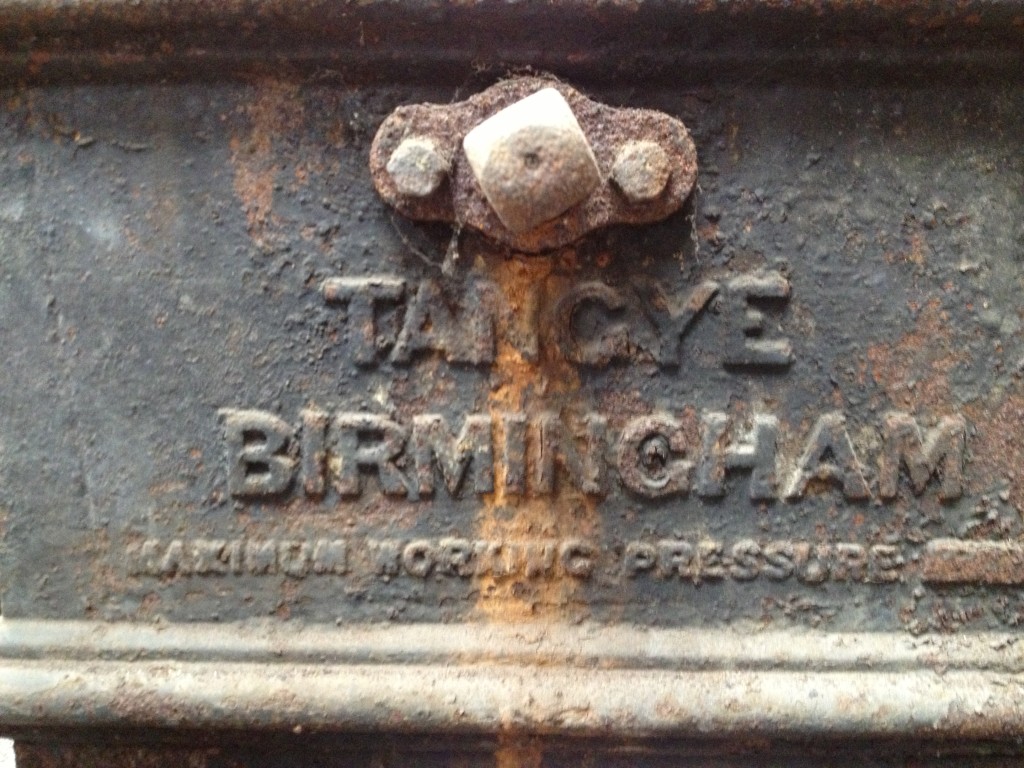 Below: With the Power from the Past (this weekend) and Somme commemorations looming, Matt and I have received training on the Ffestiniog Railway locomotives that are currently staying with us from their usual minder/operator.  This includes the Baldwin Moelwyn, Simplex Mary Ann and the ‘speeder’ trolley Busta.  Part of our introduction of new rolling stock into service is based on competency, this being recorded on the form we use for such purposes.  Busta is essentially a motorcycle on rails – with a performance to match! 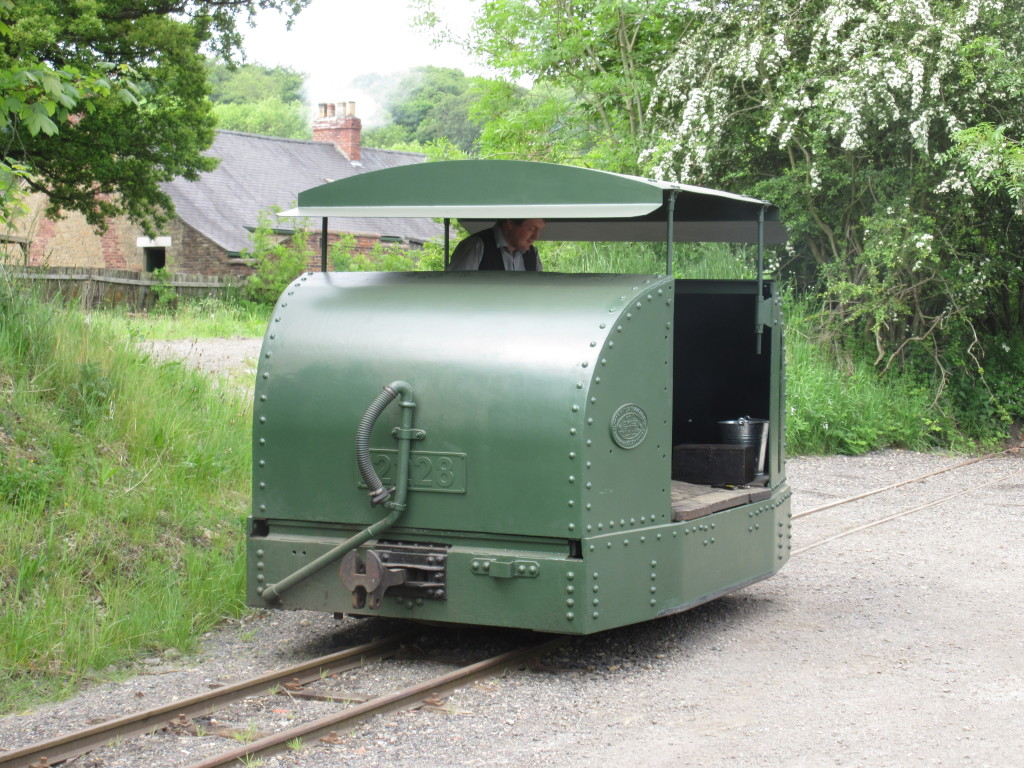 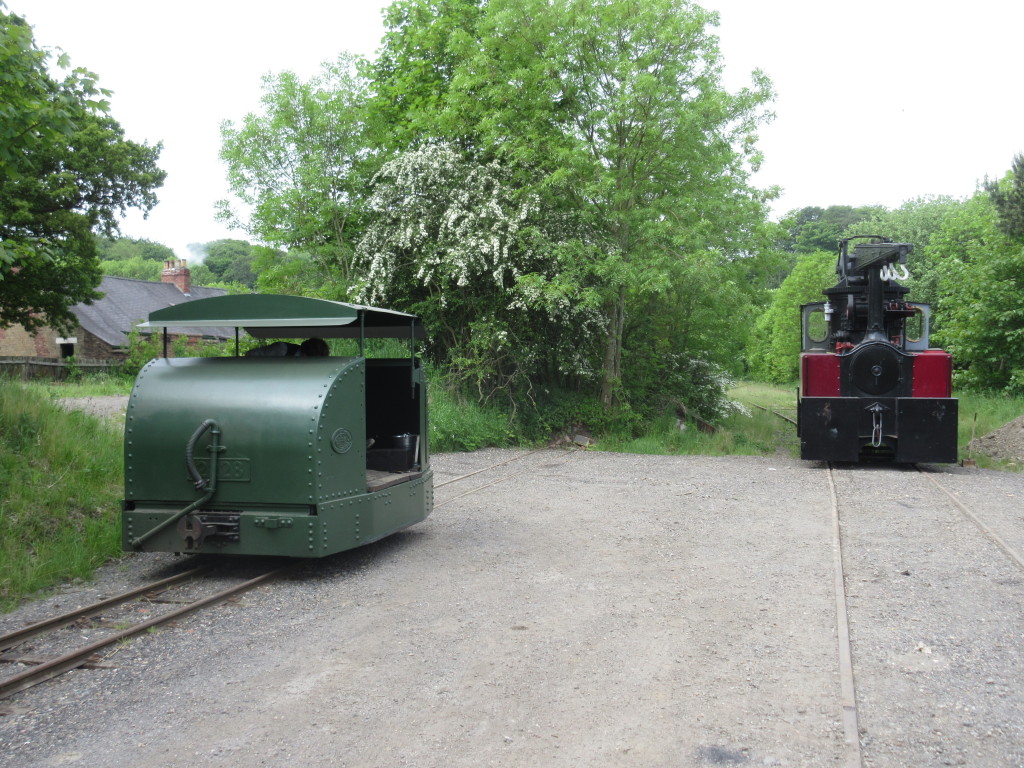 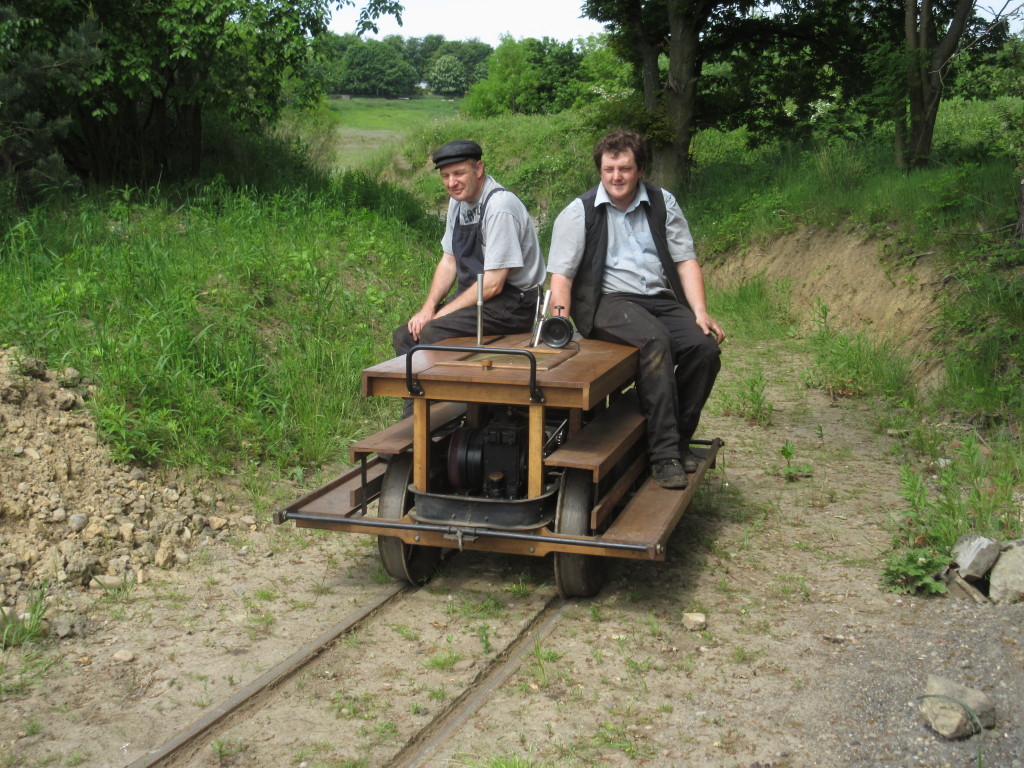 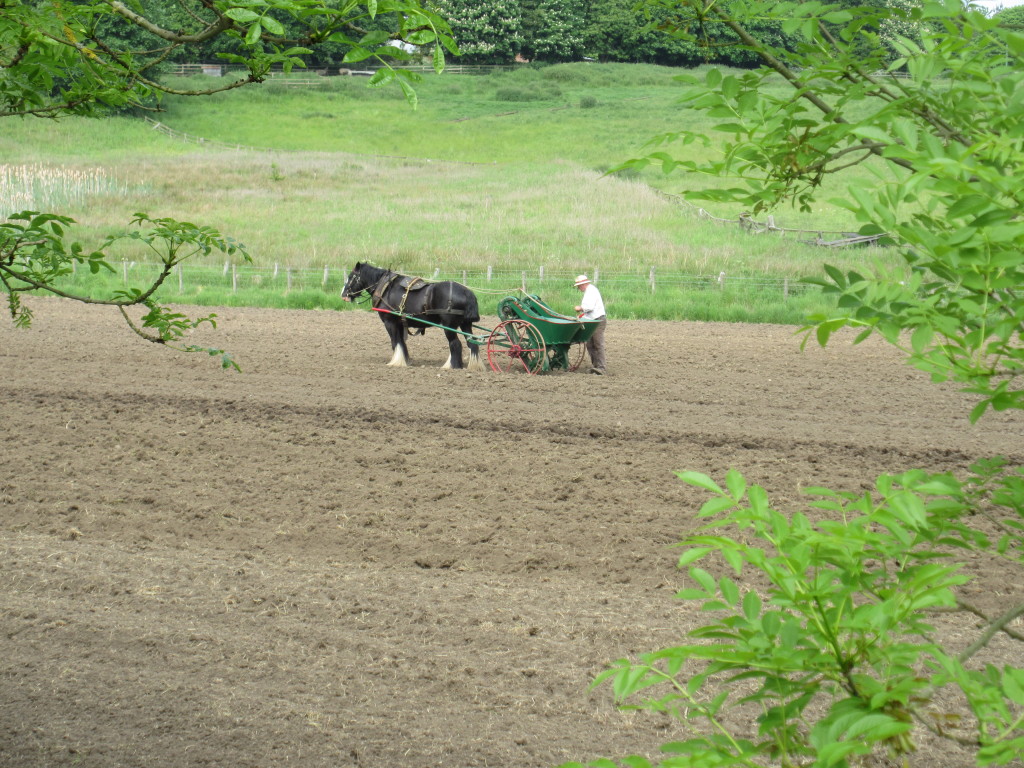 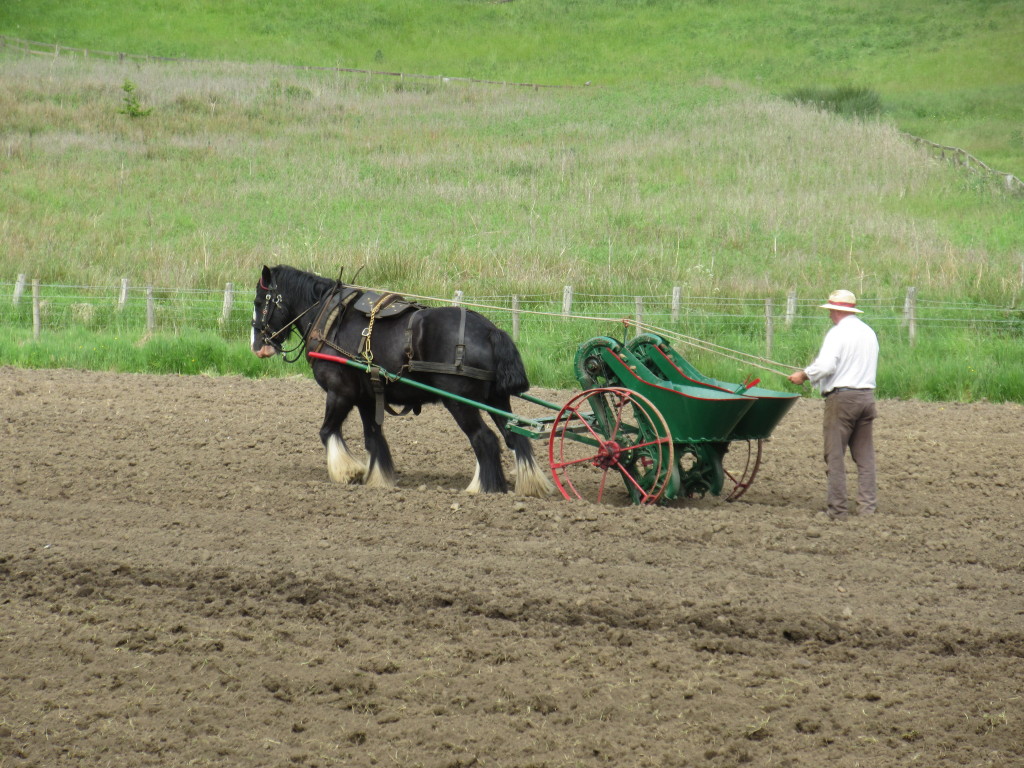