This week features a brief snapshot of news items, taken around the Museum during the last working week.  A great deal of other work is also in progress, but largely builds on the previous post so the photographs would seem a little repetitive and I am mindful of saving space on the host for this site!

Below: We begin in the chapel.  The Site Support team is working on a number of fronts.  These include day to day repairs as well as more in depth work.  At present they are completing the installation of drains and electrical conduits on site, redecorating the chapel (as seen below, with the floor being sanded following completion of the paintwork), painting various vehicles, overseeing a number of contract projects and working through the planned maintenance programme.  The design team, which I am presently involved with due to staff sickness, is also contributing to a planned programme of work over the next few months which I will report on here.  This is addition to the not insubstantial matter of the 1950s Town and Georgian developments under our ‘Remaking Beamish’ project.  This winter and spring will be busy! 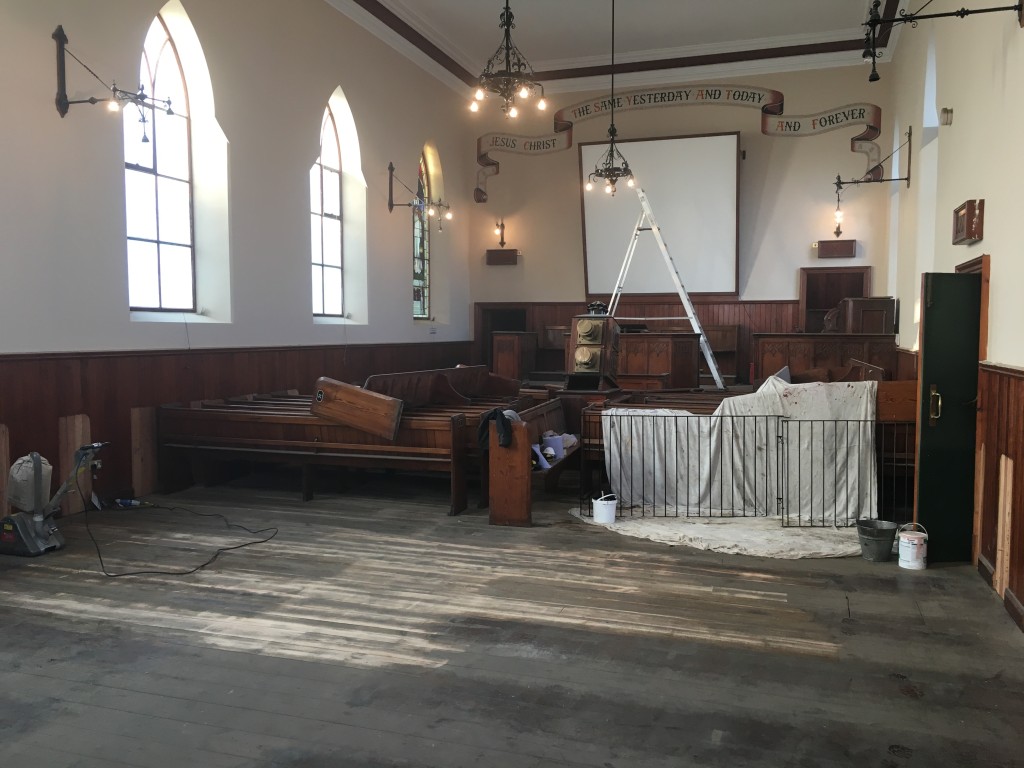 Below: Following repairs to the walls, the Solicitors in the Town is receiving some cosmetic attention – which to my eye at least has transformed what was becoming quite a tired space. 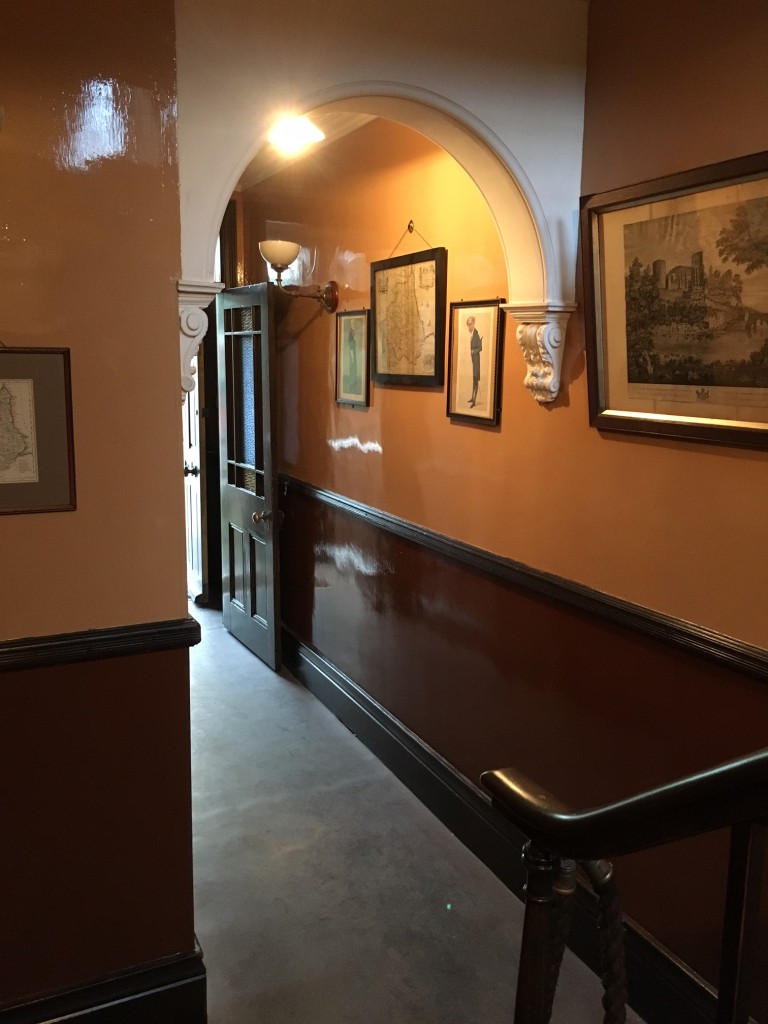 Below: Up at Home Farm, the British Kitchen and toilet block are being re-roofed.  New gutters are also being fitted.  The toilets will then be redecorated and upgraded.  Hopefully that will complete the work on this building for the next few years – fitting a new roof was something of an unexpected ordeal but will safeguard the building (itself not that old) for the future. 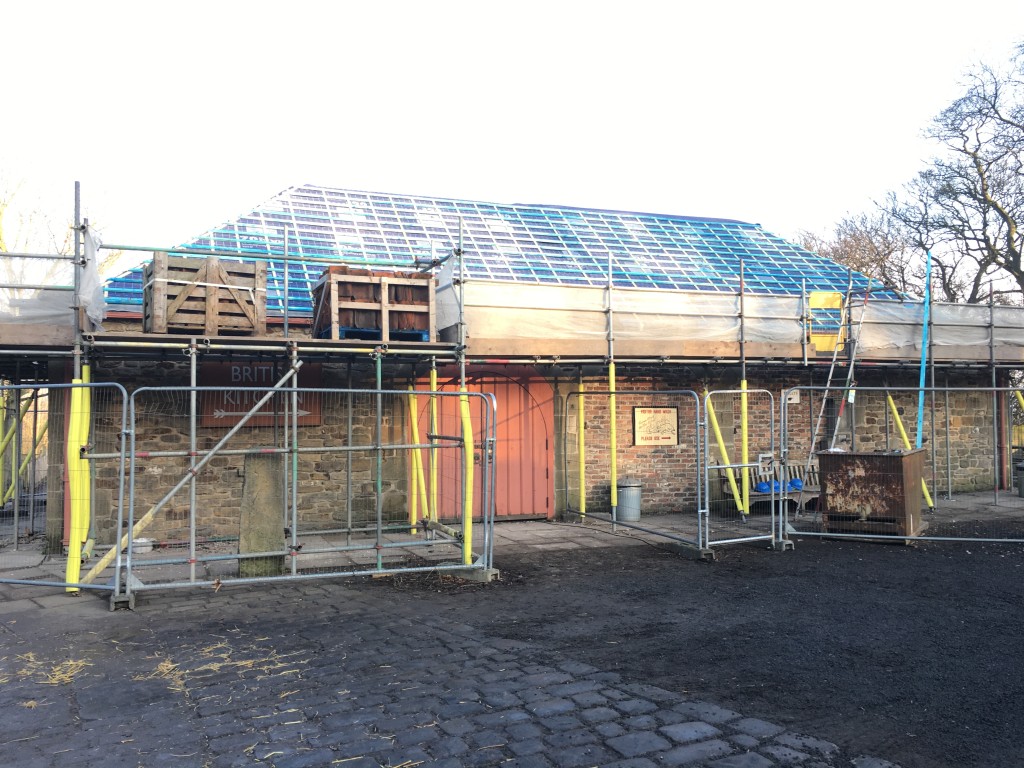 Below: In the building joinery the team have manufactured a brand new body for one of the tip-carts.  These are used intensively by the rural life team, this example having feature on this site many years ago.  The level of usage is such that a new body and shafts were deemed prudent.  This part of the team will move on to some building work in the Town and then a newagent/kiosk for the tram shelter in the Town, which I am currently drawing up (real fag-packet stuff!  Fortunately Shaun is well versed in reading such optimistic scribbles!). 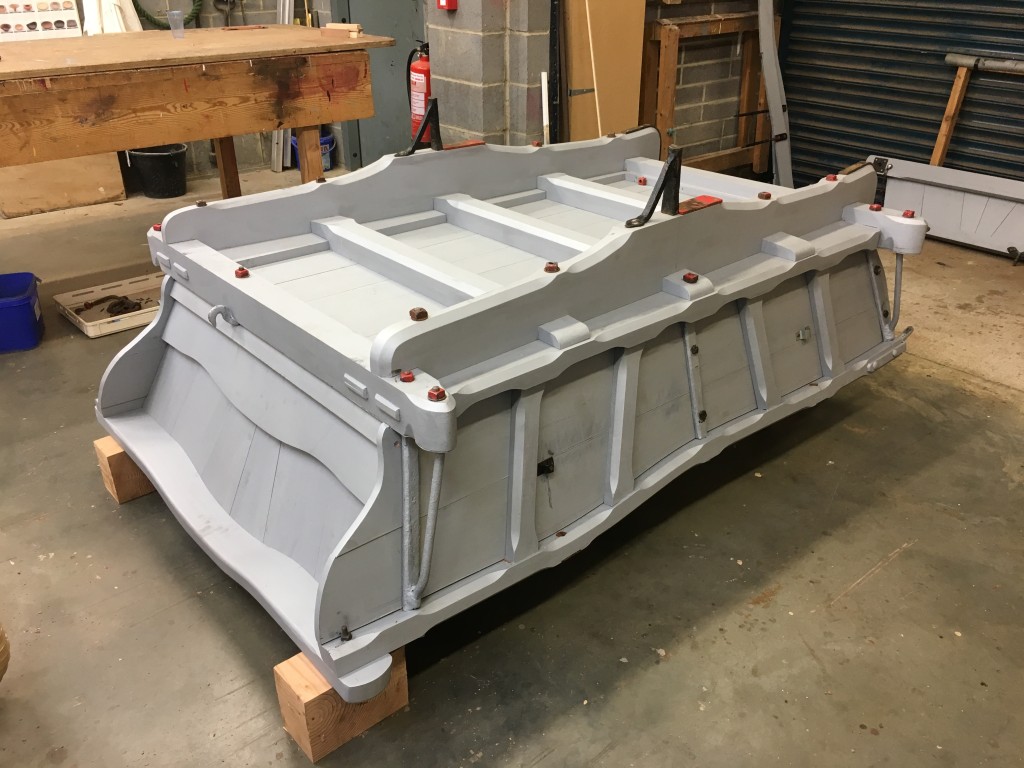 Below: Tony and Matt B are forging ahead with the Waggonway coach, which has progressed since these images were taken earlier in the week.  The side boards that cover the wheels are being manufactured in the second view here, and are now fitted and primed.  The interior is being painted, with the saloon varnished (to suggest a higher status but still remain easily cleanable for our operation). 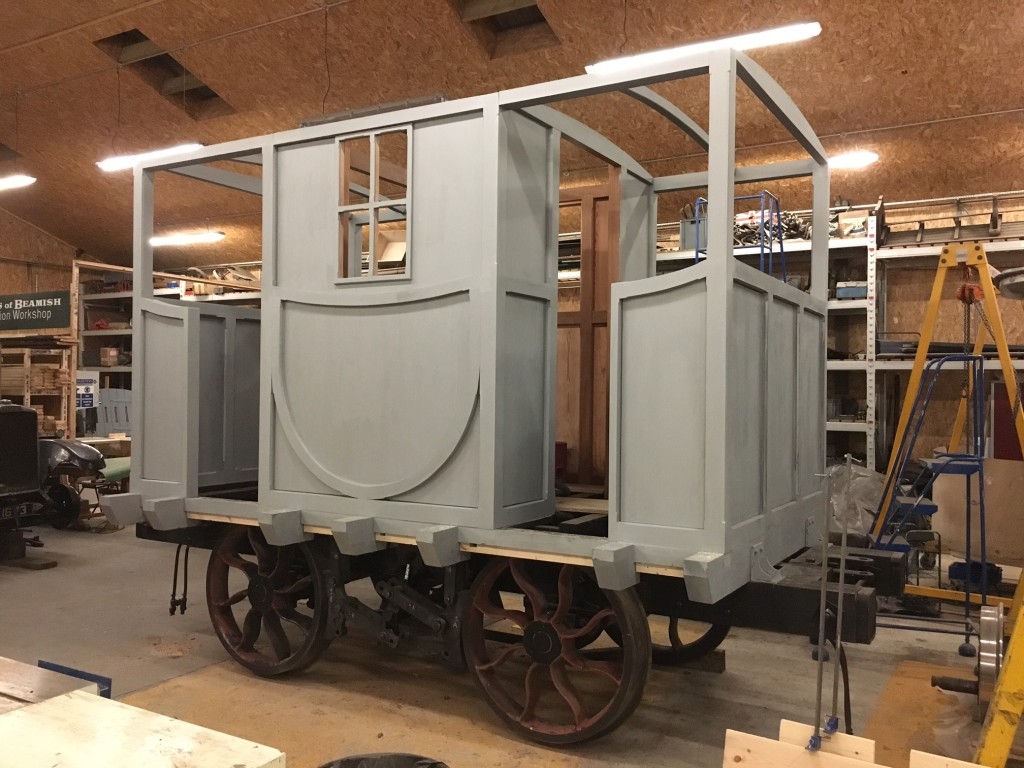 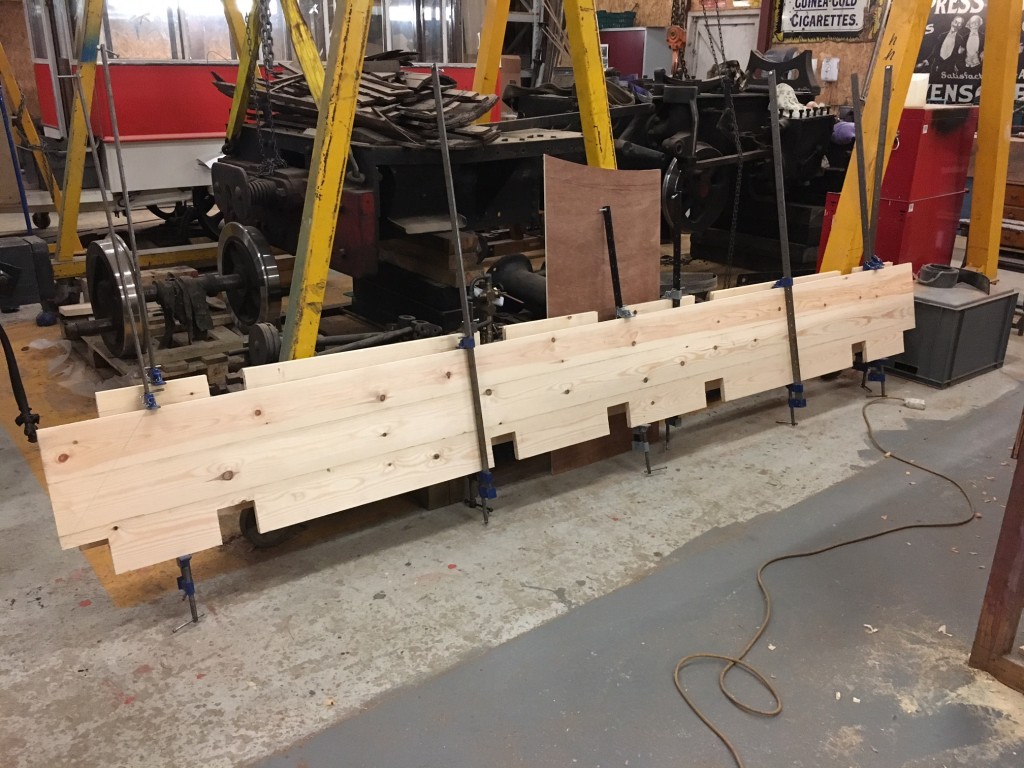 Below: I was reminded of the Rookhope snowplough when working out a plan for the Great North Steam Fair narrow gauge operation – this might return to the workshop for some attention to its wheelsets, in the hope of curing its dislike of pointwork… 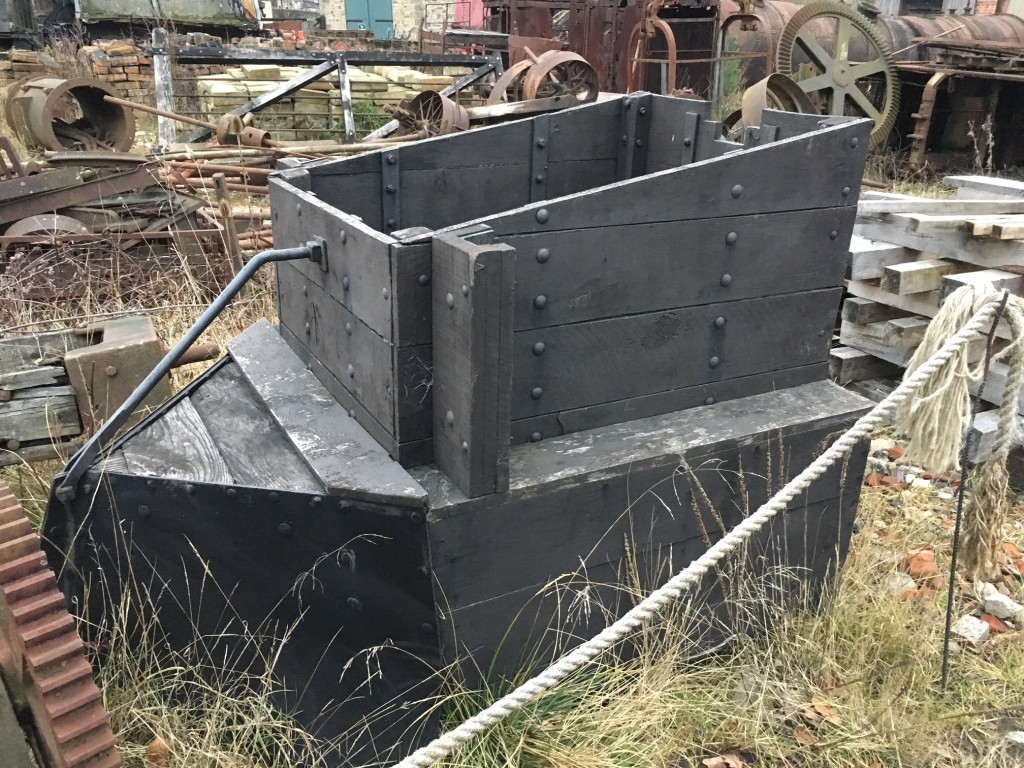 Below: A few photos show the travels of the Crewe Tractor – in use nearly every day now and much appreciated by my feet!  I am now looking for a  few details for it, including a WW1 style Greatcoat!  A First World war padlock is in the post and the POW lettering for the cans (Paraffin, Oil and Water) should be applied shortly.  It really is great fun, albeit bitterly cold in top gear in the present weather conditions – flying goggles are in the post too…!!! 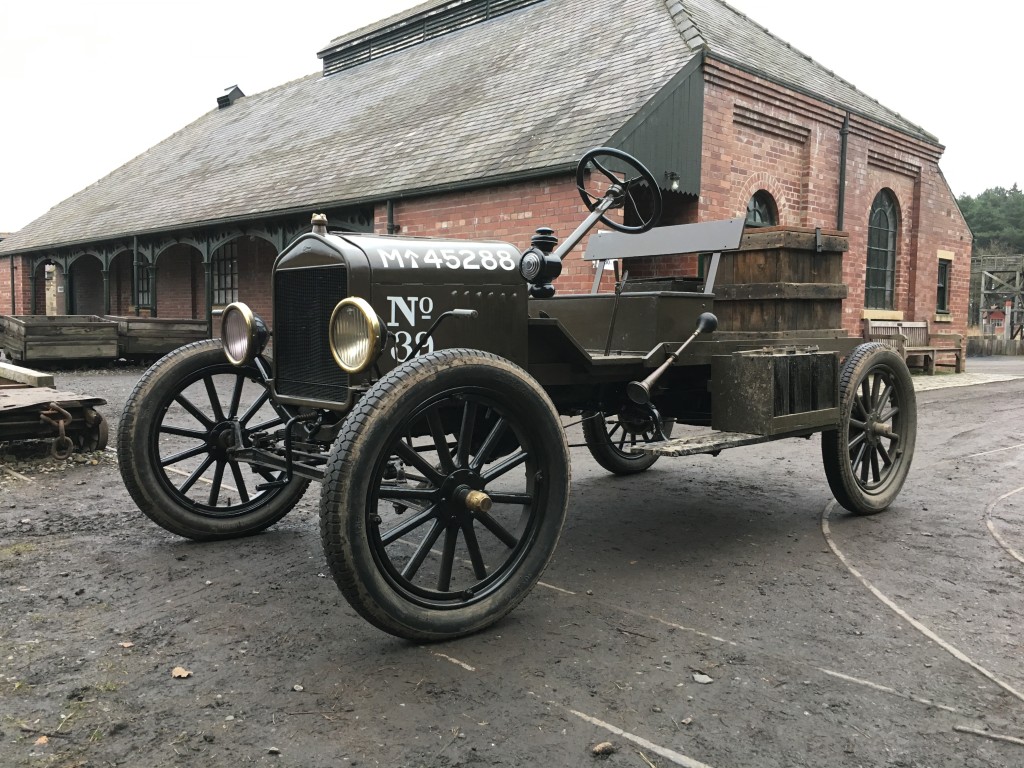 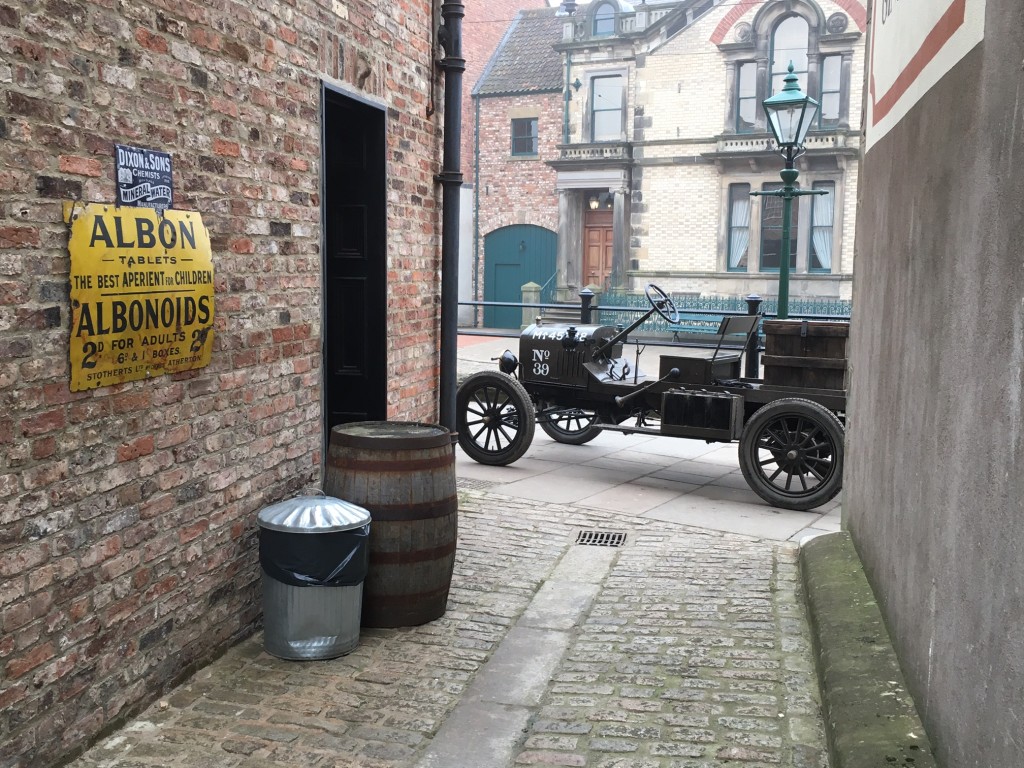 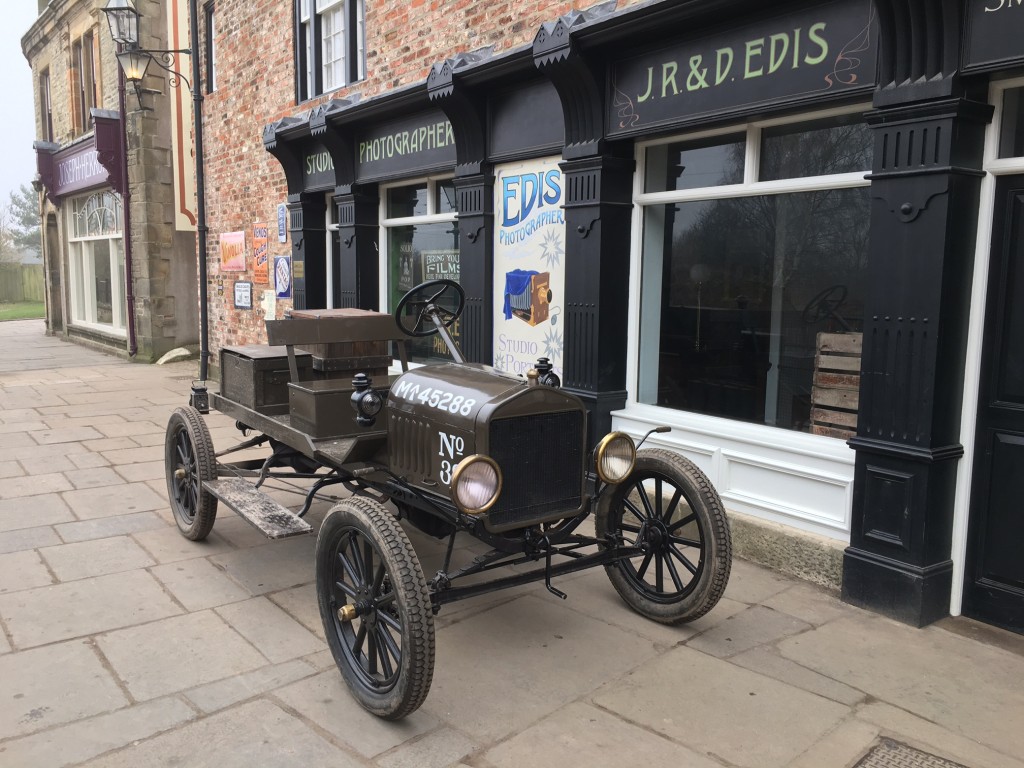 Below: Dave Young, with Chris, have made good progress on Samson’s tender.  The original plate was pressed for us, but the corners were too sharp and we weren’t happy with the appearance.  Dave sliced up some tube which Chris has invisibly welded in to give far better corner radius and enable progress on the sides to be made.  It is small, but pleasingly substantial and David is aiming to complete the work by the GNSF… 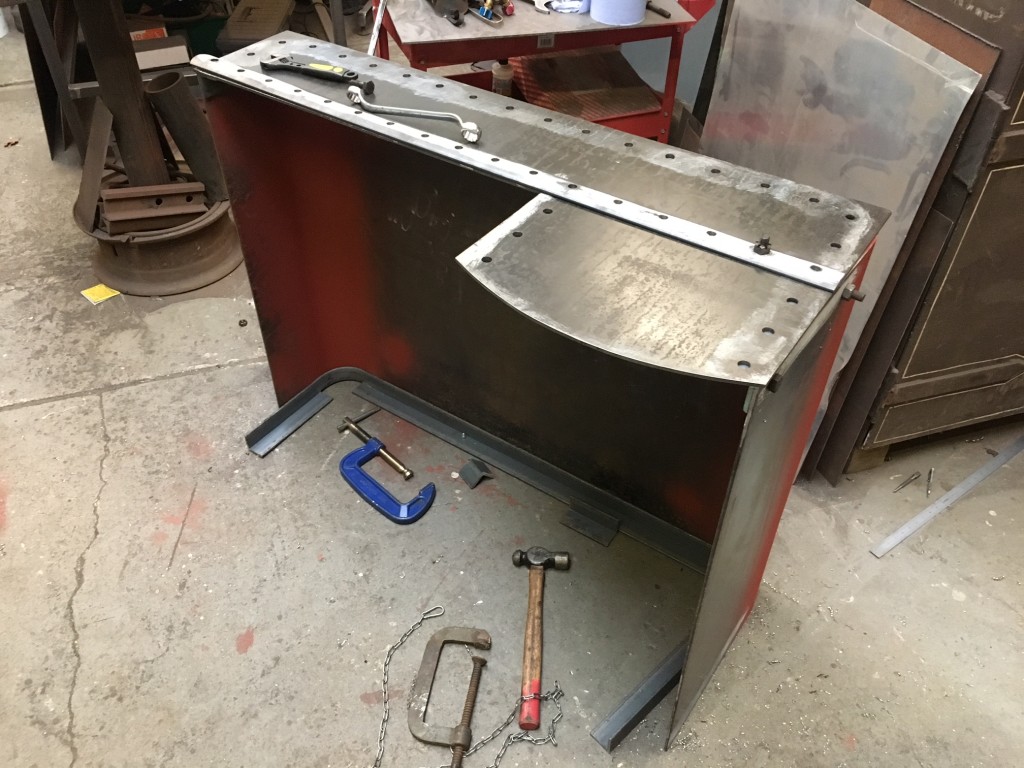 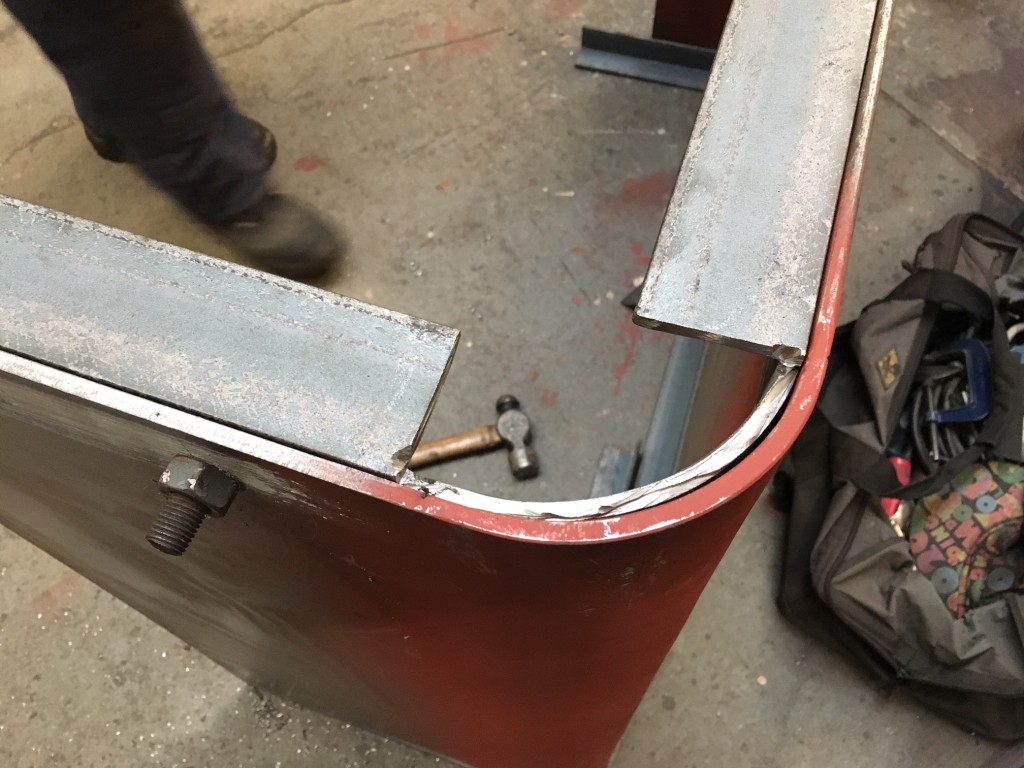 Below: It will no doubt be a relief to all road users at Beamish to hear that the much degraded street through the Pit Village is being re-laid.  Over the years the patching of potholes has resulted in a raised surface, blocked gutters and drains plus even more potholes!  The surface is now being machined off, to be rolled then re-laid by a paving machine, and rolled again complete with camber and a surface lower than the drains.  Hopefully this will buys us a few years durability in this area. 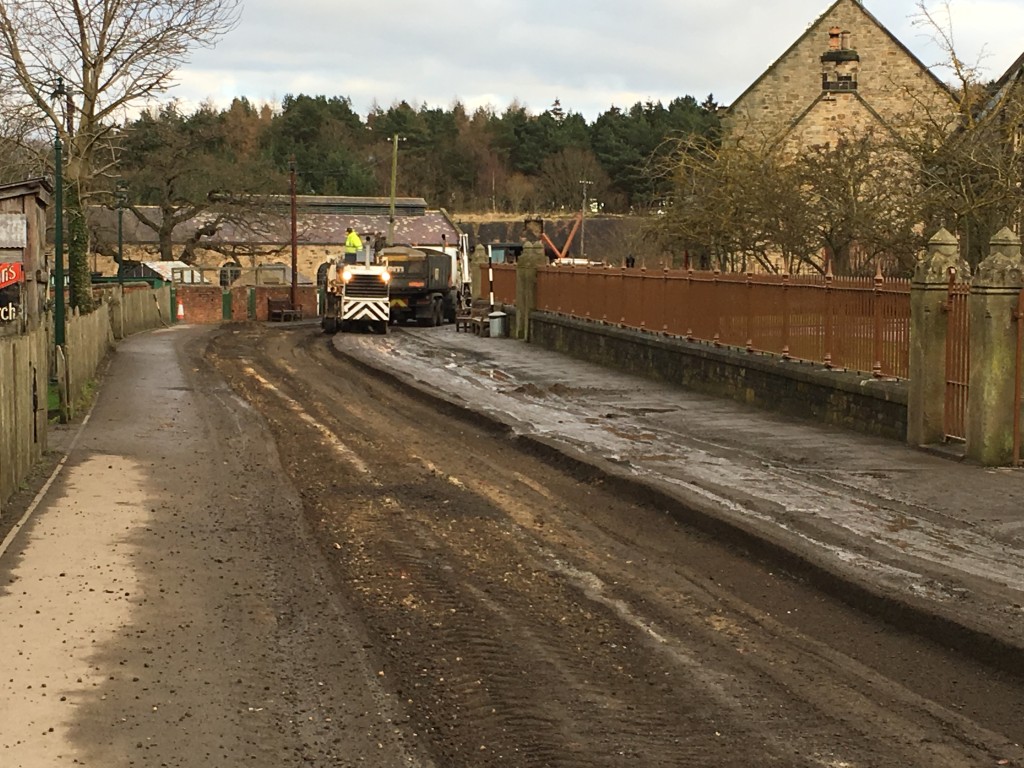 There is quite a list of site maintenance/winter projects in hand – here are some of them plus their progress:

Below: Three of us spent a productive Sunday fitting around 80 rivets to the Ffestiniog Railway side-tipping granite waggon.  The rivets are seen trimmed and cold in their hearth, then warmed ready for placing into their holes and finally with Paul Martin, Matt and I ready for the next session.  Paul removed the nut/bolt then inserted the hot rivet, which I ‘held up’ outside and Matt hammered with the air hammer (windy hammer) from the inside, swelling the rivet and creating the head internally.  There are still quite a lot more to go! 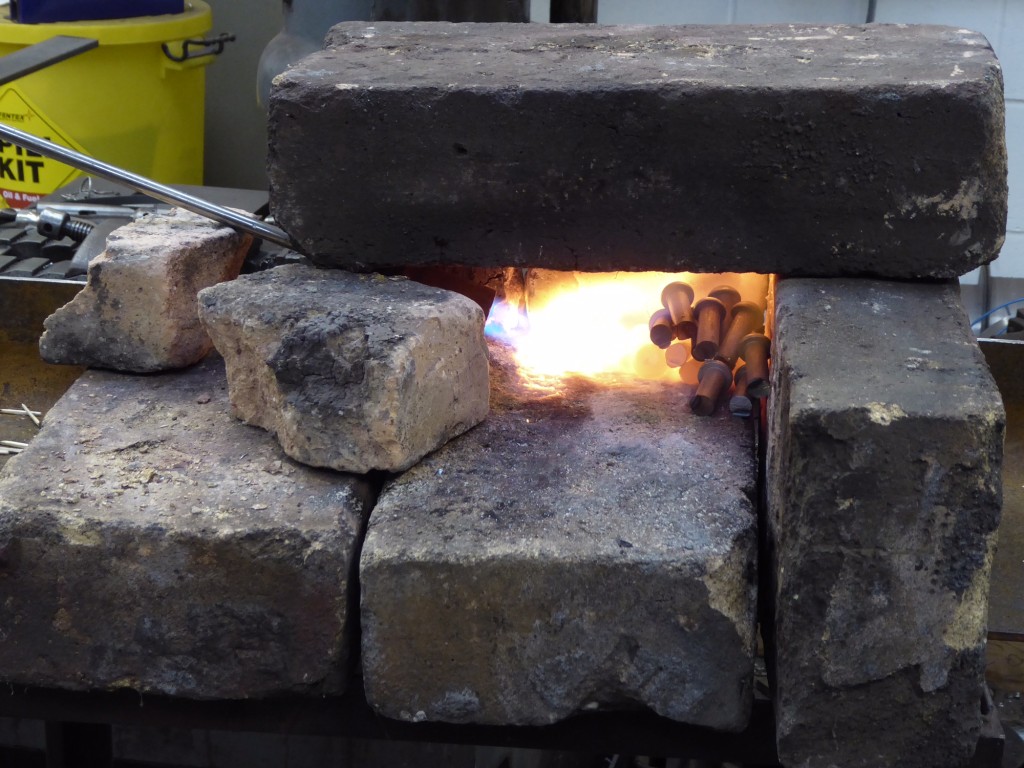 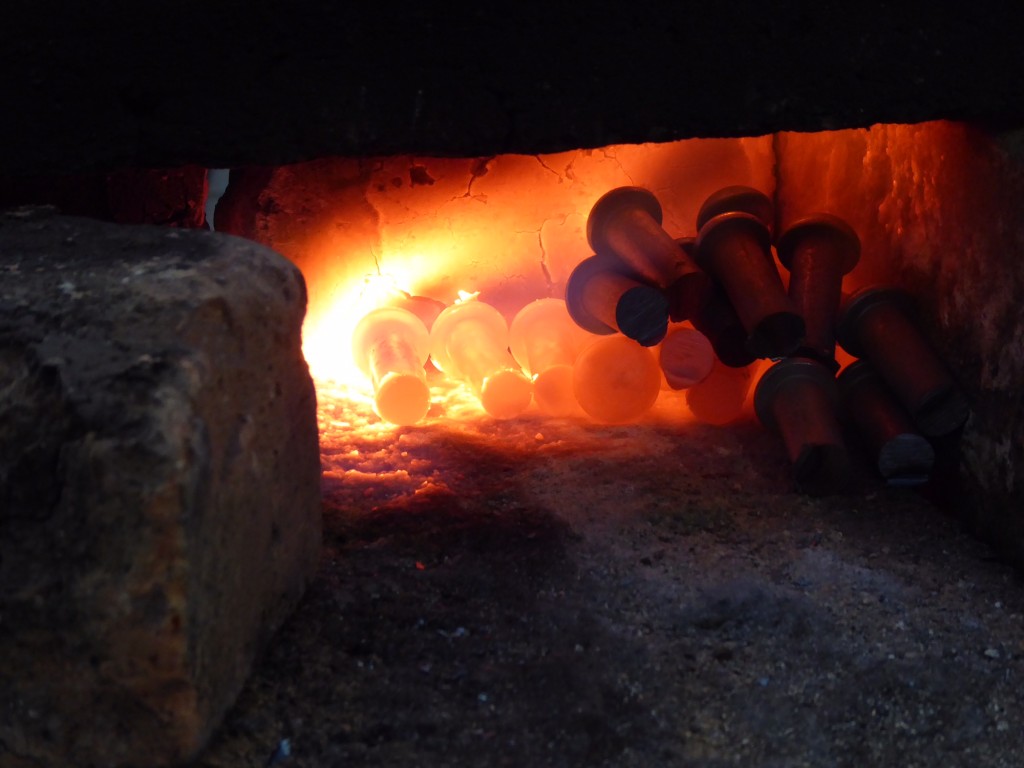 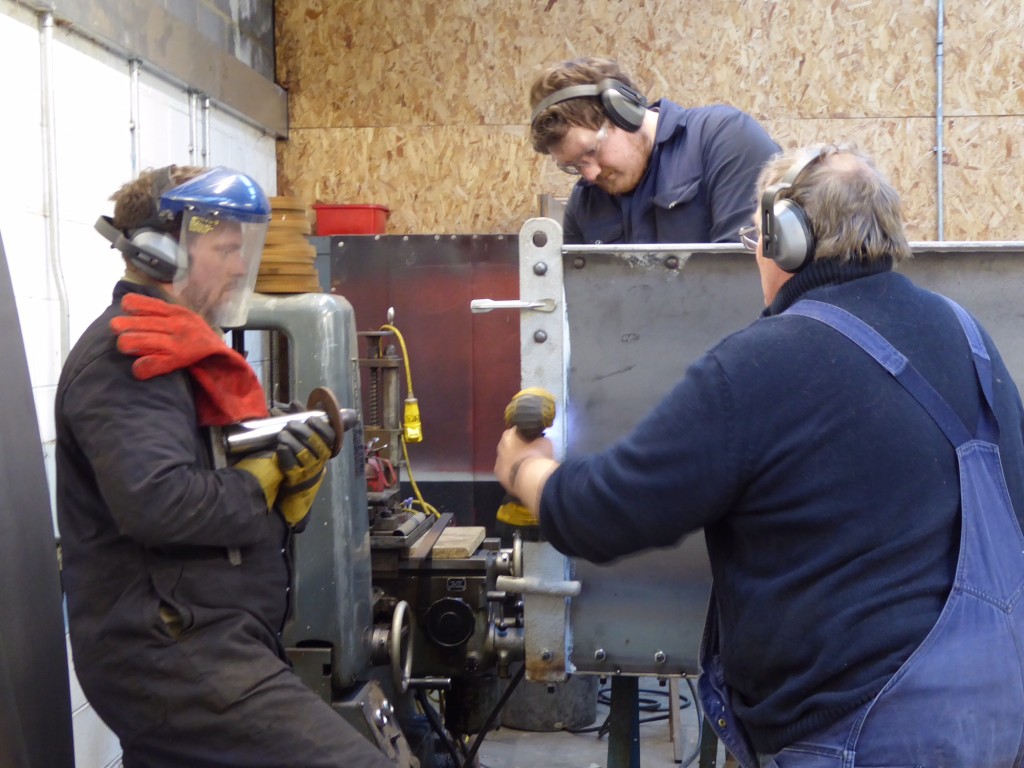