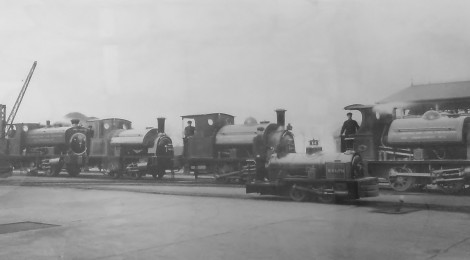 I have been deliberately cautious with the title of this post…  Nick Williams, owner of ex Granton locomotive No.9 (now known as Jack) contacted me with some extremely useful information regarding the Granton narrow gauge locomotives and their history.  It is also a useful correction for some previously accepted fact and shows that you can never be too careful when studying photographs or conducting research.  The upshot is that the engine at Beamish is not Ralph, as thought, but is in fact Esme.  Thanks to Nick and his extensive research I can explain…

In 1903 the Edinburgh and Leith Gas Commissioners took delivery of their first narrow gauge locomotive, Andrew Barclay No.988, at Granton and named this engine Esme.  In 1905 a second locomotive, Ralph (Andrew Barclay works No.1051), was supplied to the Commissioners.  In 1920 the gas works was taken over by the Edinburgh Corporation Gas Department, a move which perhaps precipitated the numbering of the steam locomotives there and the loss of names.  Thus Esme became No.5 and Ralph No.8 (No.s 1, 2, 3, and 4, and later 6, 7, 10 and 11 all being standard gauge locomotives).  In 1925 another Andrew Barclay of the same design was supplied, works No.1871 – fleet No.9,  Finally, a fourth of this ‘class’ of powerful 0-4-0Ts was added (works No.1999) and took the fleet No.12.

No.8 was scrapped in around 1930, and clearly some interchange of components place as there is evidence to suggest No.8’s boiler is now that carried by  No.9, Jack.  No.5, the former Esme, was sold to J. H. Farr (the President of the Scottish Traction Engine Society) in 1961 and was later purchased by the National Museum of Scotland following its display at Biggar Gas Works Museum for a number of years.

No.12 was scrapped in 1963 while No.9 was sold to Dr R. P. Jack in 1966 and later to Nick Williams.  Nick advises that Dr Jack also purchased a narrow gauge Hudson Hunslet diesel locomotive, No. 2927 which was supplied for use at the gas works in 1944.  This locomotive is understood to have been scrapped in the last decade.  A search online reveals a photograph of a derelict No.9 in the early 1980s long before restoration to its current fine condition.

Below: Three photographs supplied by the NMS and one with acknowledgement to the Pilton Elderly Project Group.  They show a line up of gas works engines probably taken in Edinburgh and Leith Gas Commissioners days and so suggesting the engine to the left is Esme (No.5).  Also shown are close up view (again pre 1920?) of Esme and Ralph, and finally one of No.9 (now Jack).  I hope I have acknowledged the sources correctly and would welcome clarification of photograph’s sources if anyone knows.  The gallery below is opened by clicking on one of the images, which should then appear un-cropped.

So, I hope this helps clarify the situation!  Interestingly, study of the photographs reveals a number of differences, not least the height of the weatherboards.  So further scrutiny will no doubt bear fruit including a study of Esme, as we shall now call No.5, and the stampings on the components of this locomotive…

← Open toppers in the snow…
Something rather special for the GNSF – meet Yvonne, from Belgium… →