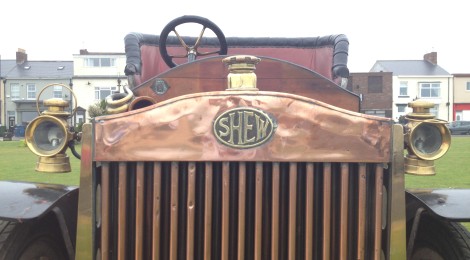 Possibly one of the star attractions, certainly one that prompts most questions, in the Town Garage is the SHEW car – the name alone provoking comment and curiosity.  When explained that SHEW stands for Seaham Harbour Engine Works, the questioner is probably little clearer on the subject matter, a small car with unusually flamboyant seats, a care worn appearance and very prominent radiator.  However, this perhaps misses the point of a very important piece of local history, perhaps most significant as a ‘might have been’ rather than in its own sense of technological or social place in the collection.

Last Saturday (4th July) we took the SHEW back to Seaham – the first time it had been in the town for over 100 years, so I thought that a bit of background to the visit and also the history (as is known) of the car would be of interest to readers (hopefully this will also come up for folks on google searches!).  I will also outline some of our thoughts with regard to the future of this car and its place in the collection here at Beamish.

In 1907 two articulated vehicles were manufactured at the Burnt Tree Engineering Works in Dudley, to a patent for ‘steering of motor cars’ submitted by Thomas Parker in 1897.  The chassis was in two sections, pivoted in the middle and with a steering rack that created the turning action around the central pivot, much like modern dump trucks function.

Below: This is one of the two vehicles – one was fitted with a four cylinder White and Poppe petrol engine, the other (the SHEW) a two cylinder Forman engine.  The front portion is self contained – the engine, gearbox and drive all being located here (note the drive chain inside the front wheel) and the rear section essentially a trailer.  Great manoeuvrability was claimed and was presumably the purpose of this photograph! The SHEW is probably the second of the vehicles, the first being used as a taxicab in London for some months.  As a result of this success the Sedan Auto-Car Syndicate was created to develop the idea. 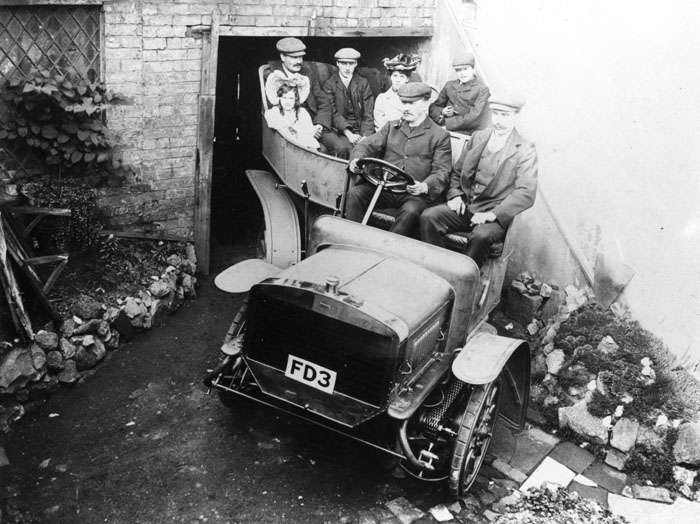 The Sedan Auto-Car Syndicate purchased the Burnt Tree works in late 1907 and further developed the Parker chassis principle. The SHEW at Beamish is probably their second vehicle, perhaps started prior to their purchase of the works, but by now part of their output.  They sought a production partner for the design and turned to the Seaham Harbour Engine Works (SHEW) who had established themselves with a reputation for construction both railway locomotives and steam lorries (known as Londonderry Waggons).  After a change in personnel, the works was looking for alternatives to steam construction and made some speculative attempts to establish a motor vehicle range were therefore made.  Enter the Sedan Auto-Car Syndicate who commissioned SHEW to produce motor vehicles to the Parker patents.

The Forman engine vehicle was dispatched to Seaham, arriving in 1908.  Fitted with a 16HP engine and artillery wheels, its intent was probably as a commercial vehicle rather than passenger carrying one.  Colour is thought to be green/black with white lining.

Three vehicles were manufactured at Seaham, one being photographed and supplied to the Coalite Company, another in van guise also being photographed by the contemporary motoring press.  Of note for these was the radiator set up behind the engine (where the bulkhead would be fitted) – very similar in appearance to that now fitted to the front of the preserved SHEW – suggesting that this at least is a Seaham component.

SHEW used the vehicle as a works hack (deliveries and collections) whilst they evaluated it.  It was found ‘wanting’ and so in 1910 the chassis was made ridged, conventional Ackermann steering was fitted, the drive was moved to the rear axle, the bonnet modified and a seat fitted that may originate from a horse drawn vehicle of the period.  The 1906 registration was a Sunderland allocation and would have been required for the SHEW’s duties around Seaham (where it was involved in an accident with a bicycle, for which E. Saunders, the driver, was fined £5!).

With the demise of both the SHEW (works) and Sedan Auto-Car Company around 1912, after the production of only three more vehicles, the car was used until WW1 broke out in 1914, when it moved to Lord Londonderry’s estate at Wynyard Hall (sources differ on the date – some state the move was 1912).  On the estate (Londonderry owned the controlling share in the Seaham Harbour Dock Company plus extensive coal and railway interests) the car (as we shall now refer to it) continued its general purpose role, complete with a tool chest on the rear platform.  It was probably in store by the time of the outbreak of WW2.

Below: The SHEW rediscovered after years in storage at Wynyard Hall and before ‘restoration’. Note the solid tyres, flatbed back and striped colour scheme on the seat sides. 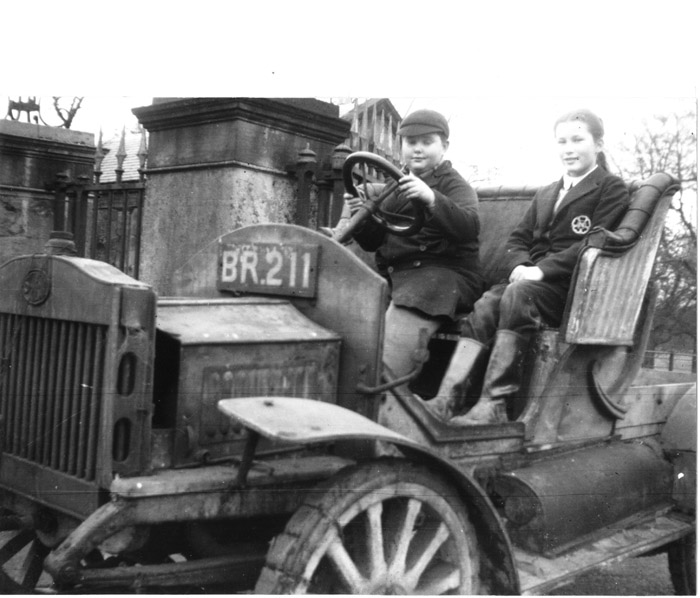 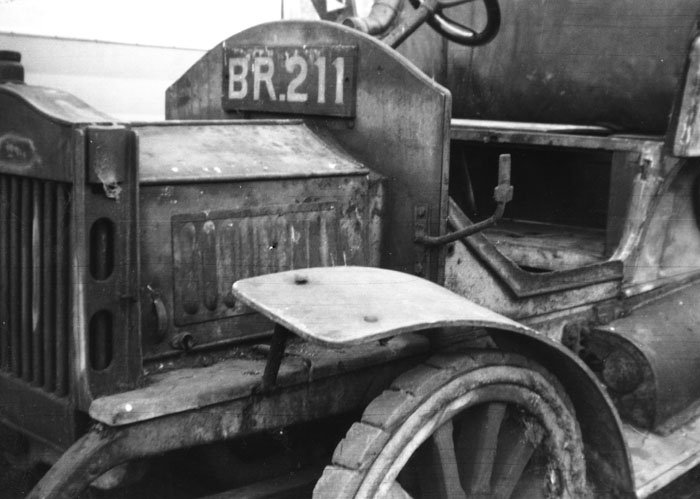 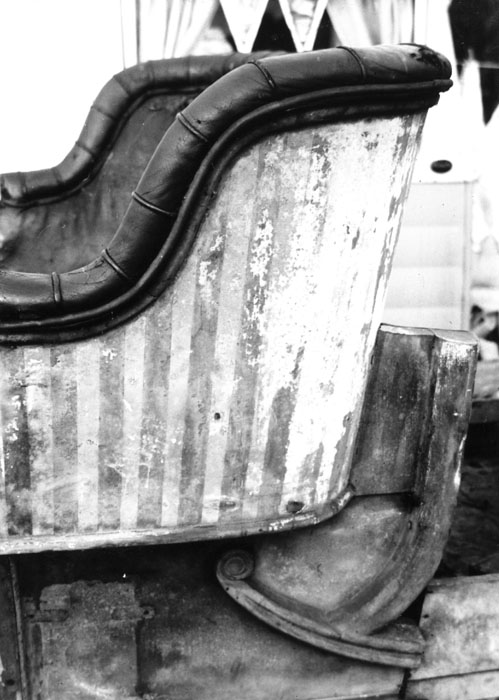 In 1956 Fred Baxter, a Model T Ford collector from Harrogate, became aware of the SHEW in an outbuilding on the Londonderry estate at Wynyard Hall.  He alerted George Kendrew from Stockton-On-Tees, who obtained the car and set about a rebuild to enable it to participate in the 1957 London to Brighton run – a challenge set and successfully met.  In carrying out this work, Mr Kendrew carried out a number of modifications – the most noticeable of which included the cut down wheels (in order to take a Model T Ford rim and pneumatic tyre), replacement of the rear deck with a seat (reproduced from the front seat) and removal of some detail trimmings.  The car was finished in a red and white colour scheme (though following the colour panels evident on the original coachwork) – Mr Kendrew apparently being a Sunderland FC fan!

Below: In 1957 the car is seen nearly completed but before final painting. 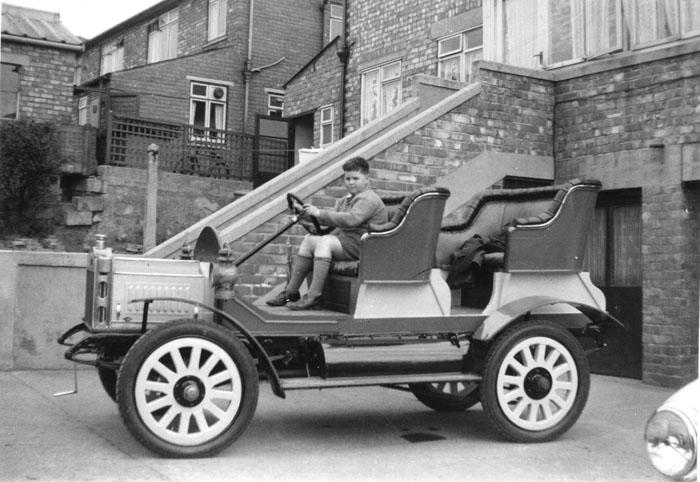 Below: Brighton reached – the car successfully reached Brighton on the 1957 run from London and is seen here with Mr Kendrew. 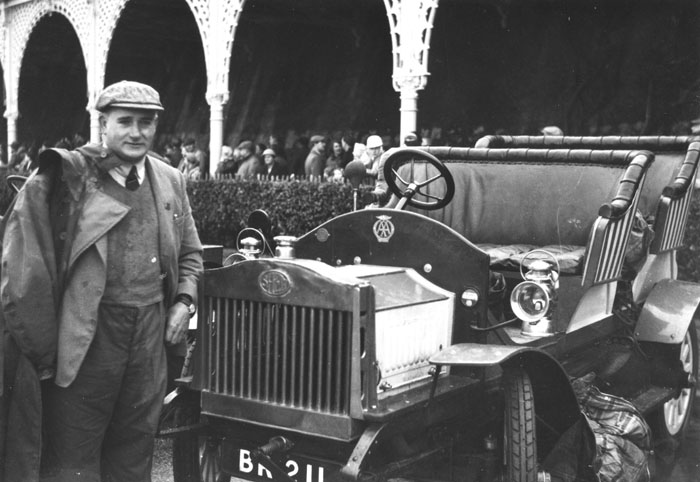 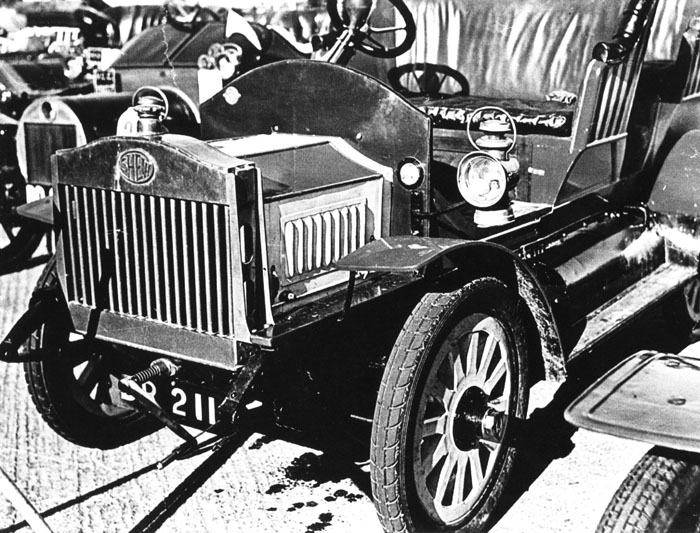 Below: Still in 1957, the SHEW passes a familiar London landmark on the 1957 London to Brighton run – at this time its true date of construction was not known. 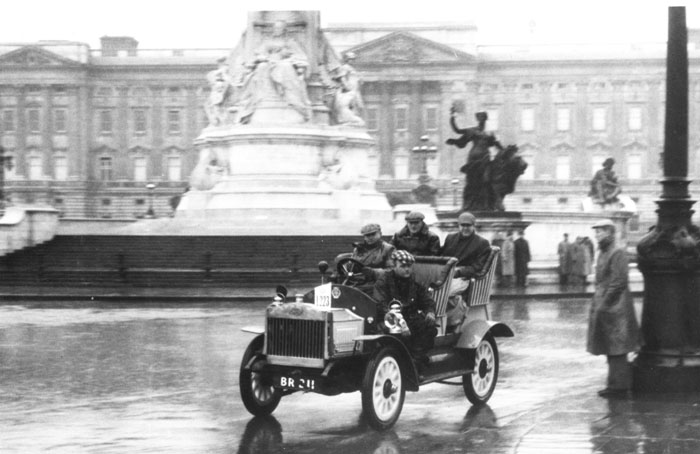 Below: In 1963 Mr Lindley of Mirfield near Leeds purchased the SHEW, it being sold again in 1967 and it disappeared from public view for nearly four decades until purchased by Beamish in June 2003. 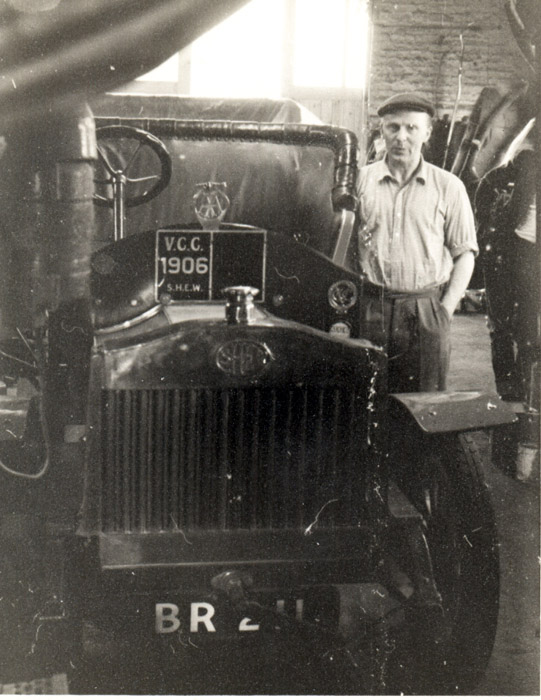 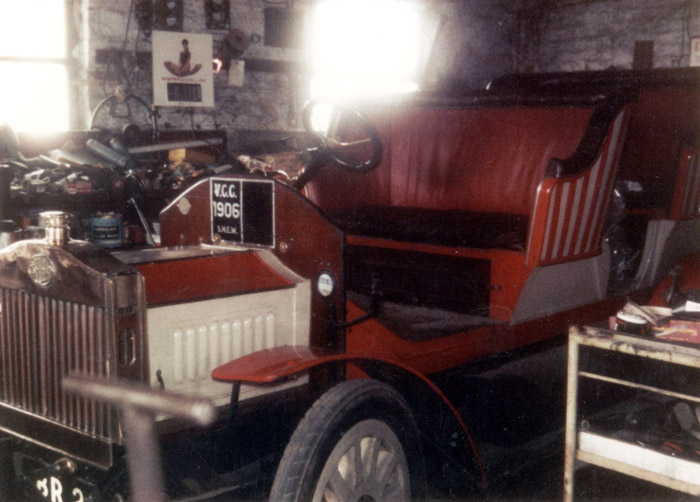 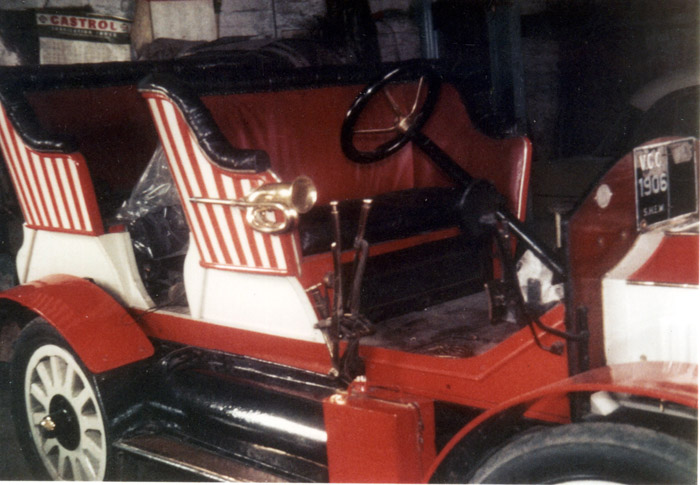 So, why reference to fiction?  Well, the Veteran Car Club London to Brighton run has a cut of date of 1905.  Mr Kendrew claimed the origins of the car as 1904, but makers marks on the chassis (Rubery, Owen and Company) can only date from October 1905, the engine dates from 1906 and the BR 211 registration is also 1906.  The wheel hubs have cast hubcaps, title ‘Sedan’ – the Sedan Auto-Car Syndicate as we saw earlier dates from 1907, so despite some dating to 1906, the origin of the car is much more likely to be 1907.  Thus it was ineligible for the VCC run though this revision to the date is of little consequence to its importance to Beamish in terms of local history and appeal.

Below: On July 4th 2015 the SHEW was taken to Seaham to take part in the classic car show there, this being the first time in the town for a century!  It is seen alongside a new local icon, the commemorative statue locally called ‘Tommy’.  By Monday morning the SHEW was back in the garage at Beamish. 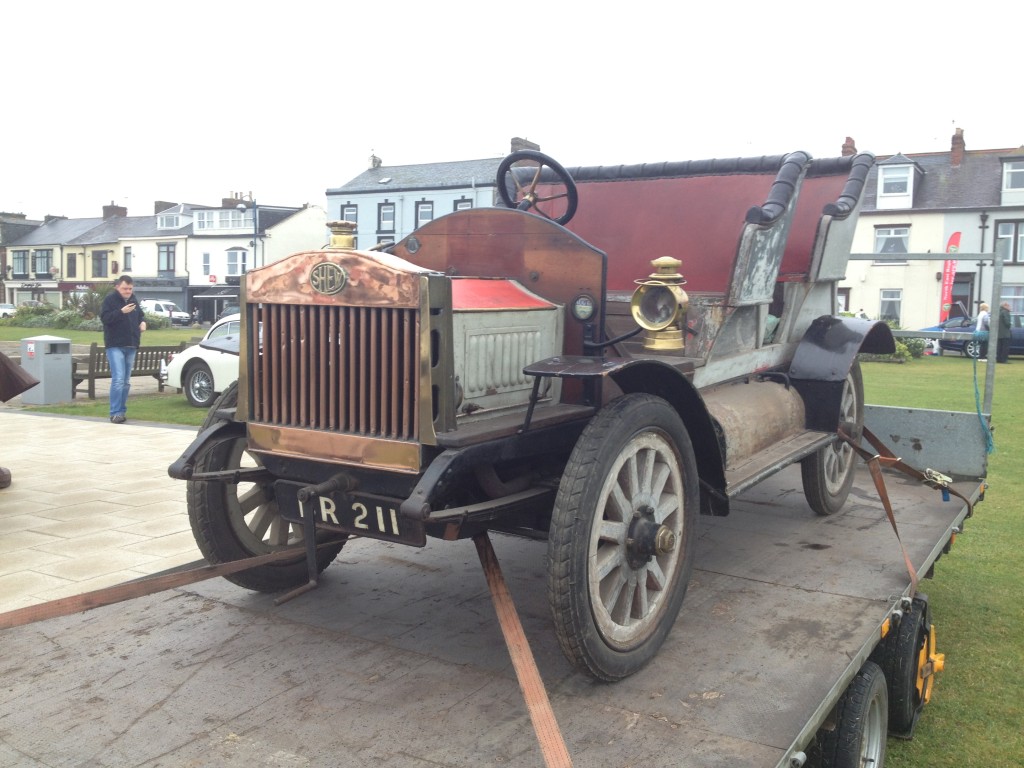 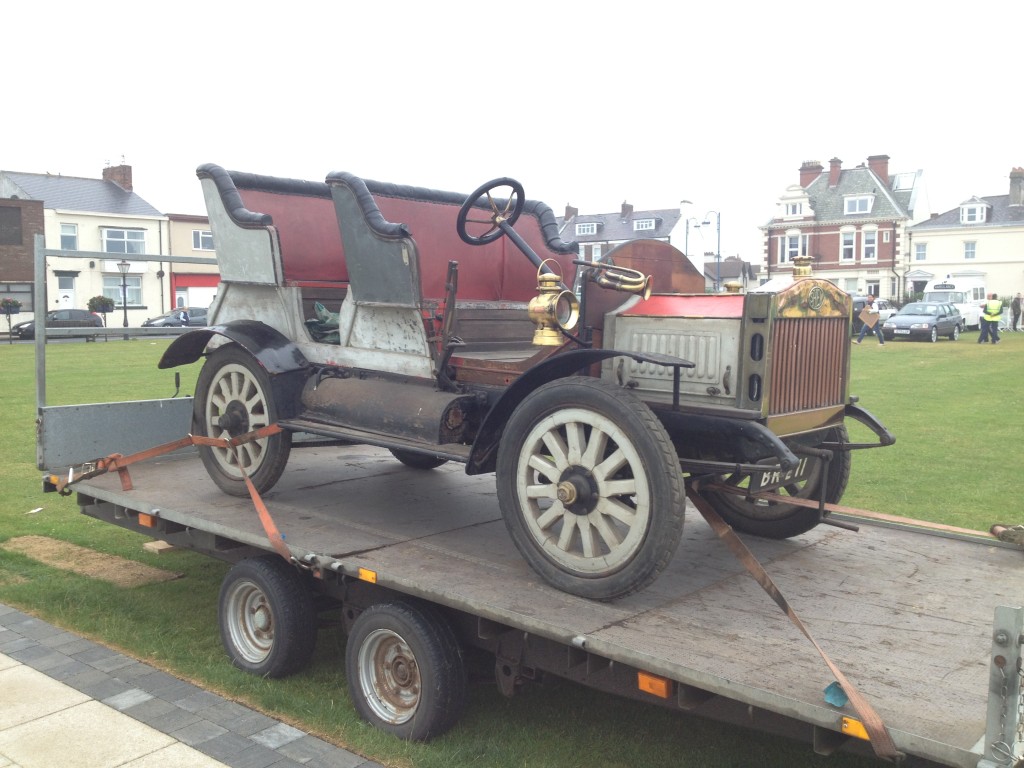 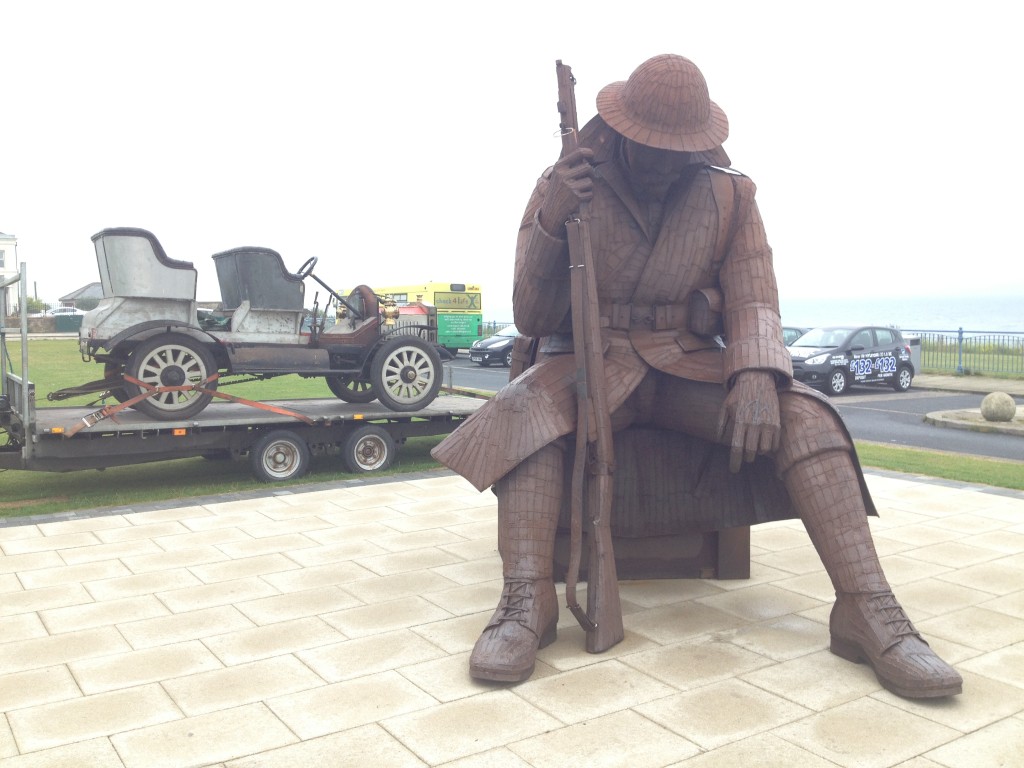 The future of the SHEW at Beamish

Well, what do we do with the SHEW next?  For many years it has been left untouched as it was felt that the work to conserve/restore it was beyond the facilities the Museum had at the time.  After the work on the Barford & Perkins motor roller R025, I now believe we are in a position to consider doing something with the SHEW and there is a keen volunteer team available along with the space and workshop facilities to support the work.  And so we have the question of what guise to restore it to.  These can be summarised thus:

Taking the above on balance, the preference would be to overhaul the SHEW mechanically, reinstate the features evident in the 1956 photographs as these essentially reflect its appearance in the 1910s/20s, paint it in a subdued colour scheme and reflect the story of a motor car production that never was at Seaham as well as the vehicle’s life at Wynyard.  This is least intrusive to the remaining fabric of the car, can follow photographic evidence of its condition and gives a very strong local story to interpret at the Museum.  The aspiration would be that it be in full working order (and perhaps able to drive to Seaham under its own steam next time…), something that I am sure would be of great interest to visitors and enthusiasts alike.  The work will involve substantial mechanical input from the volunteers, much curatorial head scratching from myself and others, some coachwork and reconstruction of the wheels to once again take solid tyres.  If we do progress, I’d also like to do as much as possible in the Edwardian Garage in the Town, so that visitors can see the project develop.  But for now we have R025 to look forward to and one or two other ideas lining up, which as ever will be revealed in these pages…

Numerous sources were filed at Beamish when the car arrived, but a notable amount of work was carried out by Rory Sinclair, a noted local veteran car historian and owner and much of the information above has been gleaned from his work and the various sources (without narrative) that are kept in the archives here.