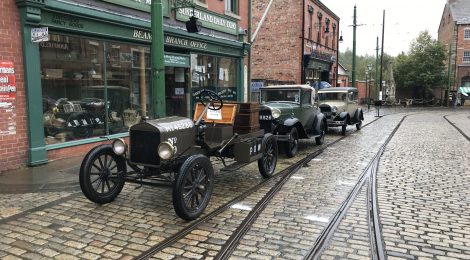 The present level of opening, with many staff still furloughed, means that there is little change one day to the next in terms of transport developments. The bus operation is our sole activity, and with no workshop staff back, I’m afraid the blog is somewhat short on news.

On Wednesday last week we experimented with an idea to create a series of enhanced transport running days. This was planned in conjunction with the Friends of Beamish and some local vintage car owners, making sure we didn’t exceed the number of six in any one group. The week started bright and sunny – by Wednesday it was raining hard and solidly! The few photos of the day reveal just how wet it was!

We are planning a further running day on the 21st October, the 18th November and probably two Saturdays (one in October and one in November – dates to be confirmed depending on how things go in the next few weeks). Some local engine owners have offered to come to the museum, and we may reach a stage we can consider steaming one of the colliery railway locos – but in this ever-uncertain time, I will confirm the details of this nearer the time.

Note: WordPress, when updated, has now formatted captions for images in the same style as the main text – captions sit below the image so the text will usually relate to the photograph above it, and I’ll try to remember that it won’t be immediately apparent when scrolling down – when I create a post, the caption text is quite different in appearance to how it appears when published!

Sunday marked the 195th anniversary of the opening of the Stockton & Darlington Railway, and the start of a five year countdown to the 200th anniversary in 2025. In connection with the date there were a number of events along the route, including the launch of a film about the Brusselton Incline:

The countdown clock was started at the Head of Steam museum in Darlington and was attended by the A1 Steam Locomotive Trust’s 60163 ‘Tornado’ which operated from Middlesbrough to Darlington North Road, posing briefly on the Skerne Bridge outside North Road Station and which is synonymous with the opening day celebrations.

The photos below show Tornado at Middlesbrough (following arrival from York and running round), arriving into the departure platform at Middlesbrough then posed at Darlington North Road. Nice to get out for a bit of a steam fix and to see it in a couple of locations on the route.