Introducing the North Eastern Railway Autocar:
From time to time one is offered the opportunity to join a trust as part of the role of curator at Beamish. Normally time constraints preclude this, but some projects really stand out and becoming involved with them is something of a no-brainer. One such is the Autocar Trust, set up to restore to working order the surviving NER Autocar No.3170.
The North Eastern Railway pioneered alternatives to steam. In 1904 the Tynesdie suburban area was electrified, with electric locomotives being developed as an adjunct to the electric multiple units employed on these lines. Shildon to Newport was electrified and powerful locomotives worked around the clock moving large volumes of coal for export. There were advanced plans to electrify the East Coast Main Line and in 1919 a proposal was made to build a main line diesel locomotive.
In line with the NER’s enterprising nature, York works outshopped two petrol-electric ‘autocars’ in 1902. Based on railway carriage practice, but with a petrol engine powering a dynamo which in turn powered electric motors mounted on the bogies, the autocars owed much to contemporary tramcar engineering. They entered service in 1903, a global first.
In 1922 No.3170 was re-engined and uprated, enabling it to pull a trailer coach. It worked on lines around Harrogate, the coast line through Hartlepool and to Selby and along the North Yorkshire coast lines.
Both autocars were withdrawn in 1931, life expired but having established an important principle as well as paving the way for a revolution in railway engineering and travel still enjoyed today.
The body of No.3170 was sold, as was so often the case with redundant passenger vehicles, to a farmer in North Yorkshire where it became a holiday home. It was latterly disused but before long renowned vintage carriage restorer Stephen Middleton had come to know of it.
Stephen saved the body and secured a suitable underframe to mount it on. A charitable trust was then formed to restore, operate and interpret this unique and hugely important survivor. 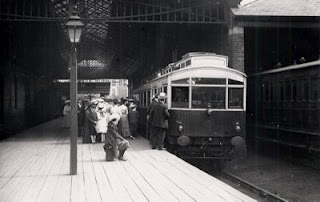 Above: Fifty years ahead of its time, the Autocar clearly attracted admirers in this view taken early on in its life. 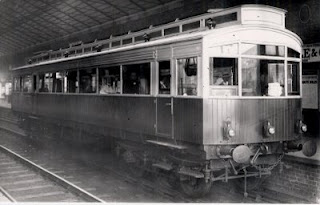 Above: The use of conventional railway carriage construction is readily apparent in this view, believed to be taken at Darlington. 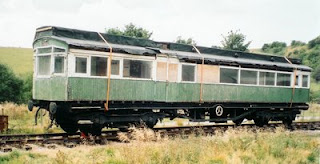 Above: The Autocar today, as stored at Boulton Abbey on the Embsay & Boulton Abbey Railway in the Yorkshire Dales. It is weathertight and waits for funds to materialise to enable it to be restored to working order for use both at Embsay and, I hope, Beamish where it would certainly look at home in the NER station recreation, offering rides along the demonstration line here.

A first stage Heritage Lottery Fund pass has been made which is extremly encouraging and enables detailed grant application work to take place before the final bid is submitted. Motors and some electrical equipment has been secured and there is a likely chance of a matching trailer coach being obtained to further add value to the project.

If you would like to help support this wonderful project and see and ride the autocar at Beamish, have a look at the website www.electricautocar.co.uk