Hello and welcome to the blog in 2018… The close of 2017 saw rather fewer posts than had been the case previously – a combination of work pressures and no longer writing the blog in the small hours! Matt Ellis has joined Jonathan Kindleysides and I as blog writer so hopefully the news updates will be restored to a weekly or better frequency this year… We start therefore with Matt’s post about the annual tramcar mileages – something that has been requested by readers. Matt has also reported on the current fleet planning. The pressures on the trams and buses from the much increased visitor numbers is tangible, and upgrading the fleet and its maintenance regime is a priority, the miles covered being way in excess of what they once were, even ten years ago. We are also looking at the bus fleet and making improvements in this area, such actions as obtaining spare engines for overhaul and transplant being an example of this. We hope to see work re-start on the Leyland Cub bus 716 in the first half of this year- the present access bus (which it was intended to replace, but will in fact now supplement) exhibiting the ravages of daily use around the site.

A reader of the blog recently asked if we would be publishing the mileages for our tram fleet this year. These figures are clearly of interest to some of the blog readers so what follows is the mileage figures for 2017, some predictions for 2018 and some other interesting notes on the fleet.

The total fleet mileage for 2017 comes out at 27,550 miles. This takes the fleet as a whole once around the world and a little more.

The mileage figures for each car are generally higher around an average per car of 6500, rather than the more usual average per car of 5500. We are operating a higher mileage for the fleet to accommodate increased visitor numbers and extra events across the year. The increase comes from operating 3 cars on days where in the past we would have been operating 2, these are mainly in the high season outside of school holidays. 4 car days are still a regular occurance (mainly in school holidays).

Blackpool 147 was with us until early March, completing the agreed term of loan to us of one year. It did most of the winter mileage in the early part of 2017. 147 returned to Blackpool whilst Blackpool 31 returned to Beamish. Blackpool 31 went straight into our workshop for its planned retyreing and motor overhaul.

Sunderland 16 was planned to be the lowest mileage car in the home fleet, this was to ensure that we spread the tyre wear on the car over as long a period as possible so that it would be available for the busy Halloween and Christmas events. This was achieved though the car did do slightly more miles than planned due to standing in for 264 and 114 for short periods in the summer months. 16 has run for nearly 25000 miles since it returned to service in 2014. It now requires its tyres turning. This is a useful figure to know, as when it re-enters service in mid-2018, we know it can do 25000 miles before it will need re-tyring, the current tyres being on their final turning.

Newcastle 114 has been the only open top car available to us this season, and has consequently achieved a high mileage, being in use almost daily when the weather has been dry. An open top car has never achieved such a high mileage at Beamish, previously this record was held by Blackpool 31 (4900 miles in 2015). The car has been in use over a much wider period of the year to keep the mileage on 16 down. The mileage should have been slightly higher but there have been a few minor faults which have meant short periods out of service.

Oporto 196 has achieved what was expected of it. 196 bears the majority of mileage undertaken as part of the “drive a tram” experiences of which continue to be incredibly popular. The tram had a planned 4 weeks out of service in November to overhaul both controllers and undertake various body work repairs. This work had been planned for some time, to occur in November when the demand on the fleet is much lower and we can afford to have a tram out of service. 196 is now the highest mileage car since we started recording (2002), in this time it has achieved 64,025 miles.

Below: Here we see 264 and 196 passing at Foulbridge. 196 returned to service at the start of December. It is currently running without the advertising panels, these required some wood work and repainting. The work is in progress at the moment and the panels will be refitted before the main season, in the meantime the lack of them does not prevent the tram from running. 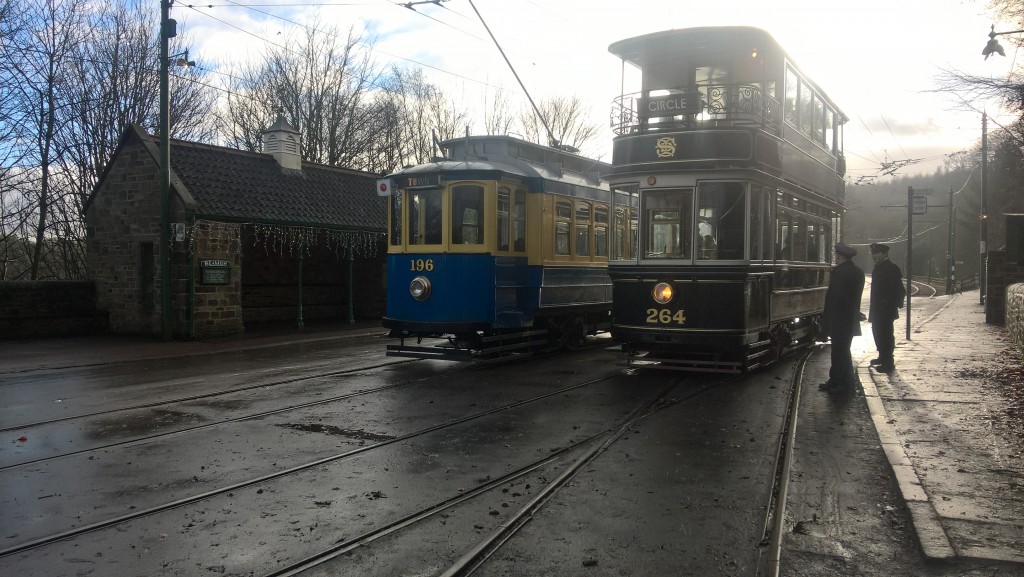 Sheffield 264 was planned to be the highest mileage car, in fact it should have achieved closer to 8,000 miles. Motor armature bearing troubles have plagued one motor in this car since its return to service, unfortunately it took time to ascertain the exact cause of this and to resolve it. This lead to two periods out of service which reduced its mileage (but increased 16’s). 264 has now been trouble free since the second out of service period and has been in service almost daily since.

The increased mileage naturally has an impact on the maintenance required across the fleet. We have various ways of keeping down time to a minimum, spare components (compressors for example) which can be exchanged for in service ones being particularly handy. In the winter months the tramway requires 2 trams per day when we are open. During this time each in service car has its annual exam and maintenance work requiring a number of days can be accommodated with ease.

Sheffield 264 should again be the highest mileage car in 2018, a figure around 7,500 miles being expected. 114 & 196 should once again be in the mid mileage range around 5,500 miles each. These 3 cars all have winter maintenance jobs planned they are then available for service for the season.

Blackpool 31 should be reassembled in the early part of the year then once commissioning and running in have been completed it will return to passenger service. It should see a mileage of around 5,500 miles; it is an incredibly popular car among the crews and regular visitors alike so its return is eagerly awaited.

As soon as Blackpool 31 is sat back on its own wheels then Sunderland 16 will be lifted. It is only the tyres that require any work, so once we can estimate a week for the lift we will book a slot with a suitable contractor to carry out this work in a short timescale. The tram will then be reassembled, commissioned and return to service. It will be the low mileage car for the year, with a mileage around 2,000 miles.

Below: Sunderland 16 sits in the depot. It is available for service until Sunday, if it is required. It will then be out of service pending the work explained above. Until the work commences it will be kept in one piece, and when required it can be used for the school education session (Transport Through Time) which the crews deliver to booked school groups on-board a tram in the depot yard. Gateshead 10 was used for a time in a similar role. 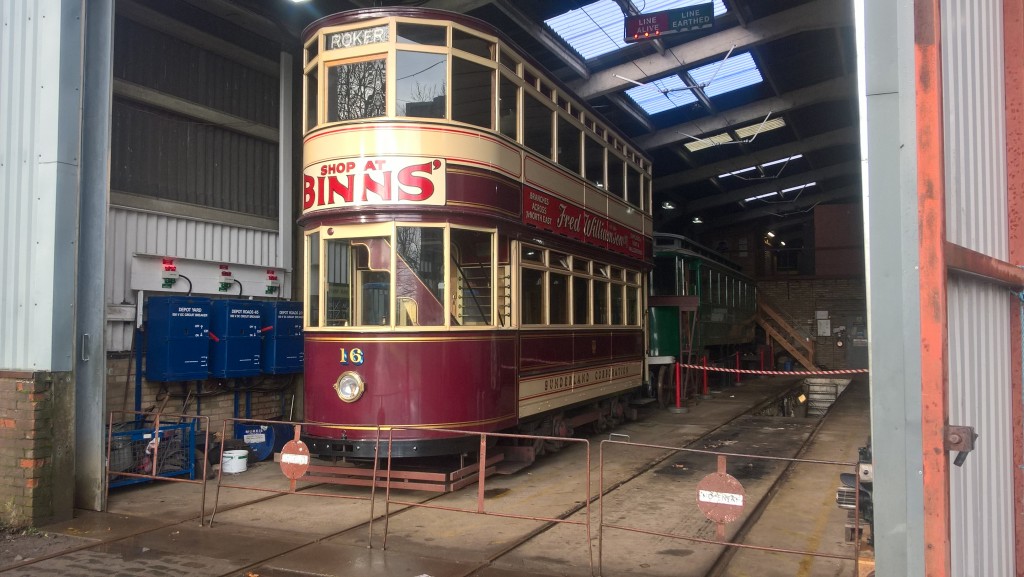 Below: Gateshead 10 isn’t forgotten. Here we see the traction motors retuned from the contractor. A significant amount of work is going into the overhaul of the tram to remove considerable amounts of wear and inadequate repairs undertaken in its history. The bogies will be re-wheeled and then the motors will be fitted. At this stage the bogies will be towed by another tram to ensure there are not any issues with any of the new bearings. Secondary suspension and brake gear (track and wheel) will then follow. 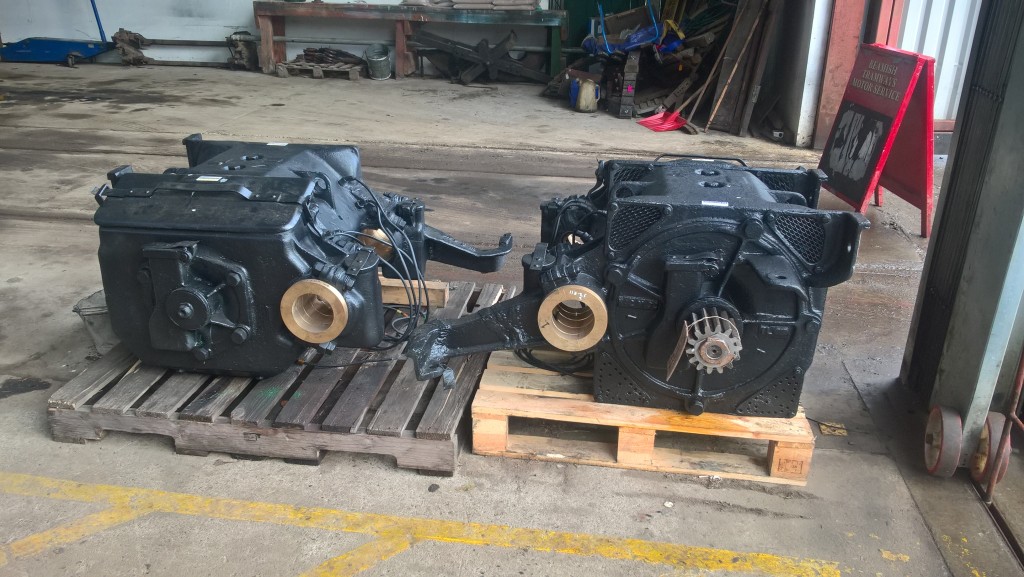 So, that’s just the Tram Fleet. The the steam and bus fleets are also consider. The permanent way sees heavier maintenance jobs take place in the winter months too. The crews (both tramway and steam) also have a busy few months ahead, with crew training and annual Mutual Improvement Classes. Who said January was quiet?

For blog readers interested in Steam, Bus and Permanent Way, I will try to find time to do similar write ups for those areas over the coming weeks.