I can only apologise for the recent paucity of blog posts – their absence does not reflect a lack of things happening, rather that we are so busy there has been little time to take stock of what is going on. Remaking Beamish is in full swing and now occupies much of the week, but there is a very great deal of work going on in the background to this as well as maintaining the existing operation. For instance, the delivery of timber that will be the RHEC’s focus of work for the rest of the year has arrived and will now be turned into the roof trusses (crucks) and other timber structure work for Joe the Quilters cottage. I’ll cover this in due course. The sculpting of the site to accommodate the 1950s and Georgian developments also continues with the bases of some of the roads and infrastructure appearing out of the mud. Here is a quick review of the last few weeks of activity in the transport and industry team…

Below: Peckett 1370 continues to operate as the sole motive power at Rowley, but was recently also engaged in a large shunt of the area in order to accommodate the Forcett coach (temporarily displaced from the Waggonway for Christmas) and move some of the other rolling stock into new locations. The Duke of Sutherland’s saloon (58A) was also shunted – the work this needs for completion will take place over the winter as well. 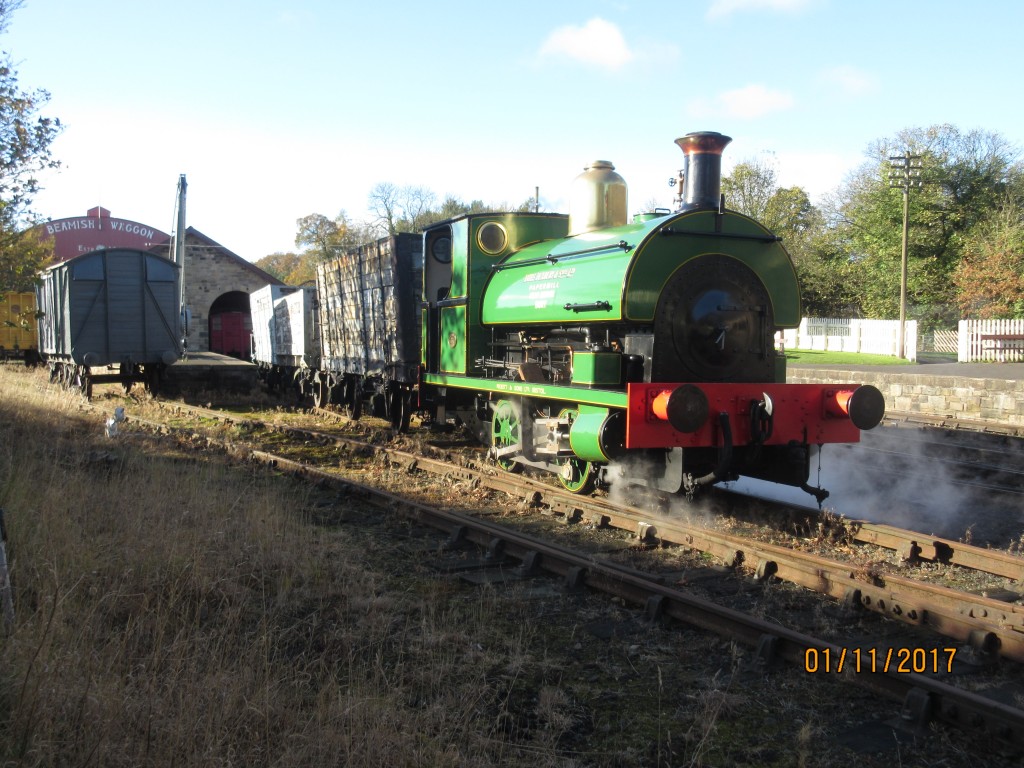 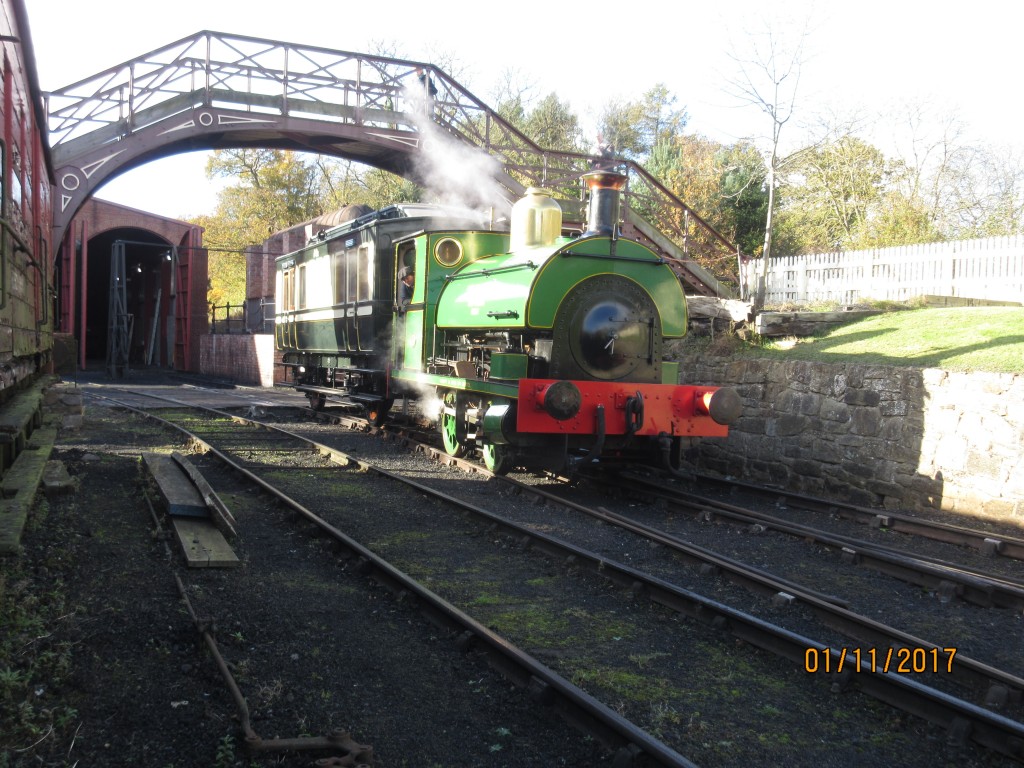 Below: Part of the shunt was aimed at opening up this vista – which has been blocked by parked rolling stock in recent years. 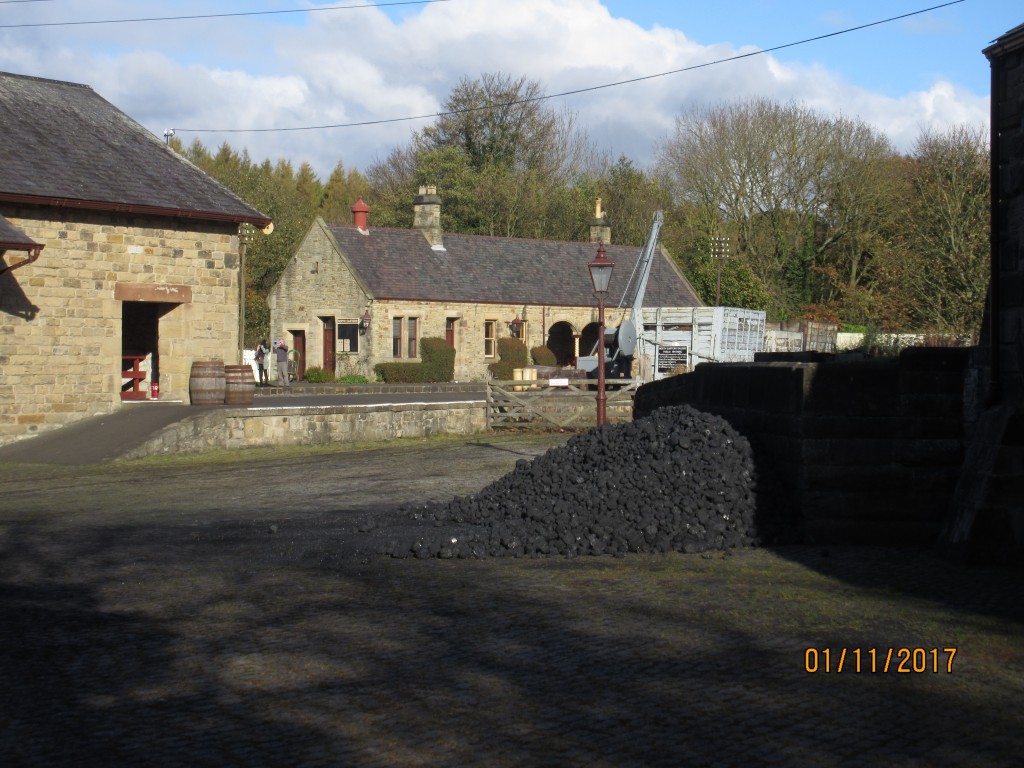 Below: The first four lengths of tramway rail have been replaced, with the Town West curve being the first to be treated. Only the high (outside) rail is being replaced in each location, this being susceptible to the highest wear rate, even with gauge widening to bring the check rail into action. The rails were pre-curved by Darren, Mark and Callum, with the swap over and re-bonding taking place in around three days last week. There are several further stretches (or curves) to complete, including the longest section on Pockerley Bank. These will be carried out after Christmas so as not to interrupt the service. 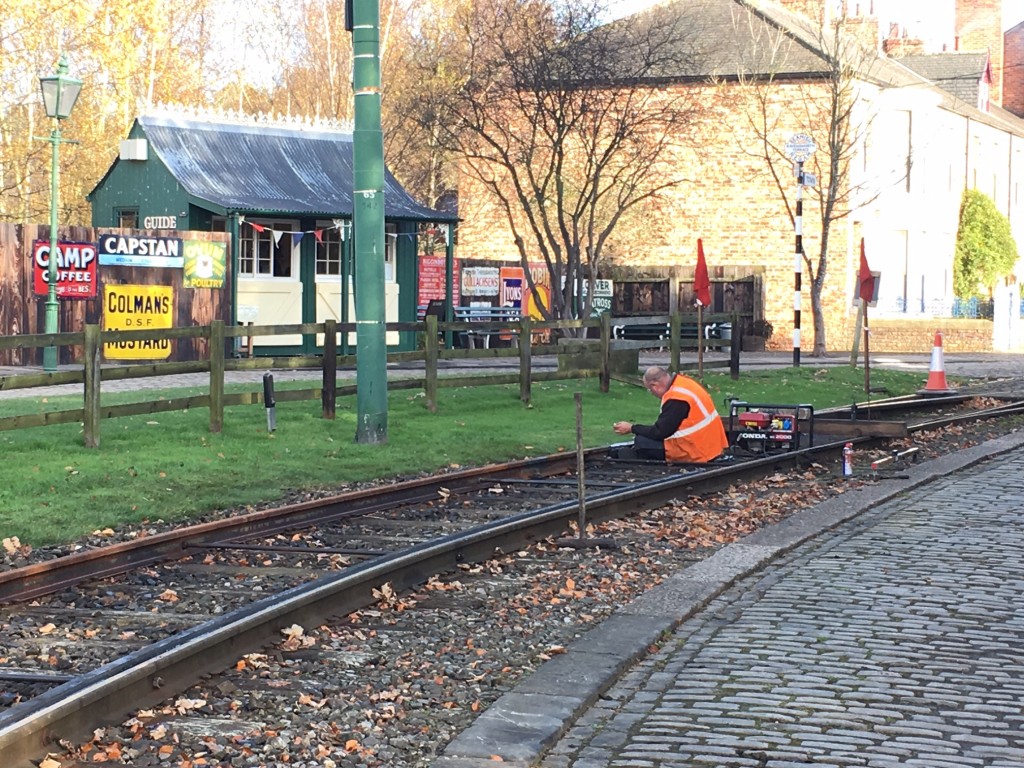 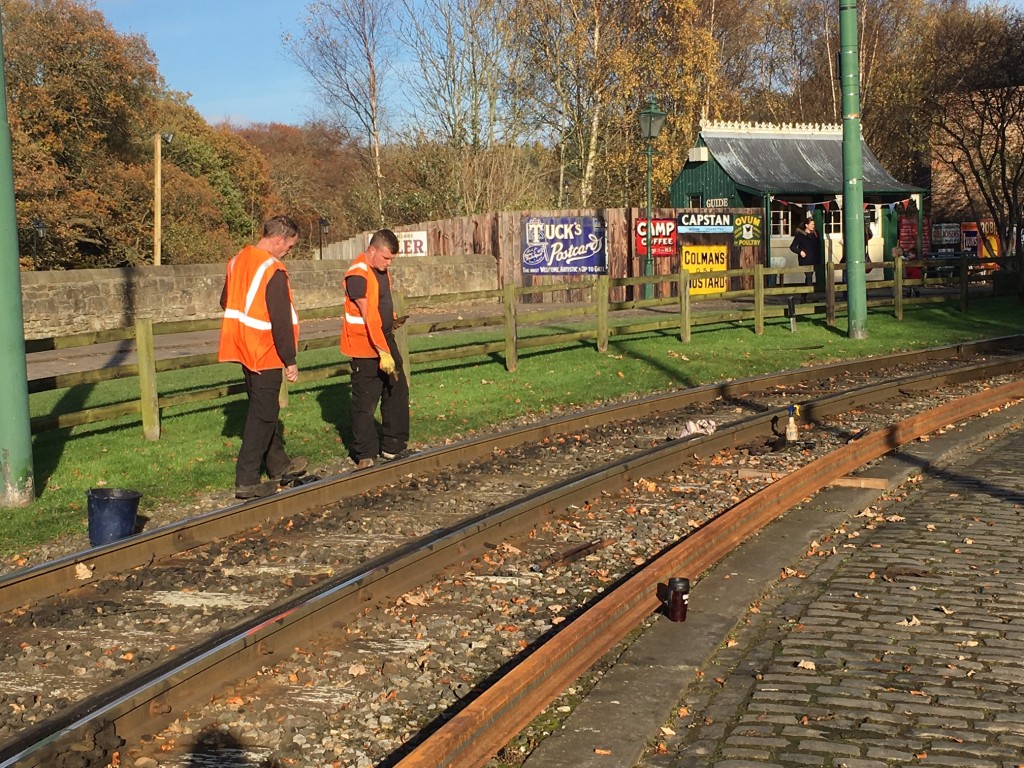 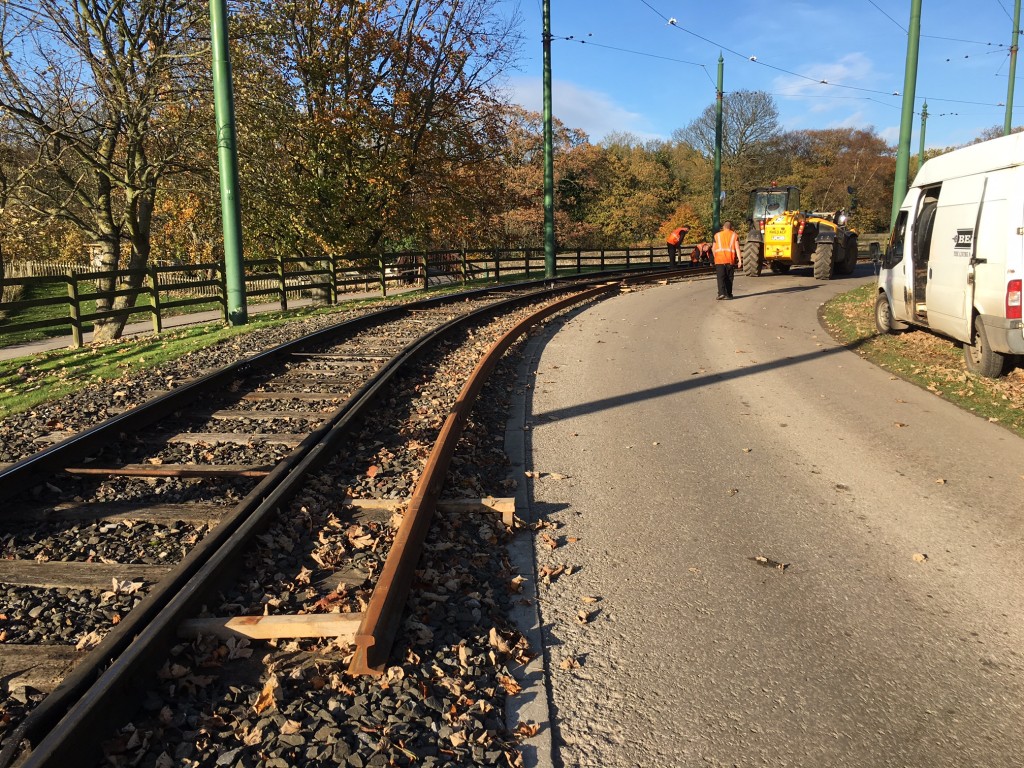 Below: Whilst waiting for the timber for the crucks to arrive, Tony and Matt B made an early start on Oporto 196’s intermediate overhaul, removing the advertising boards for rebuilding, as see here… 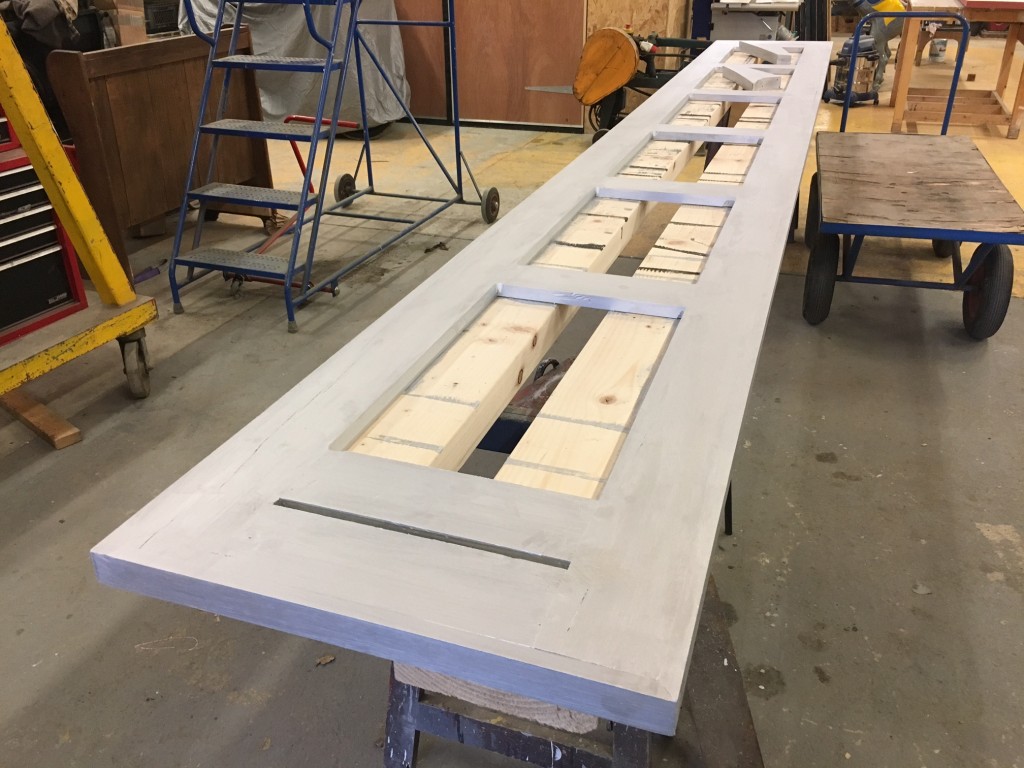 Below: Rebecca continues her odyssey through gallopers horse painting… They are all reaching a stage where the base colours are applied and detailing can commence. 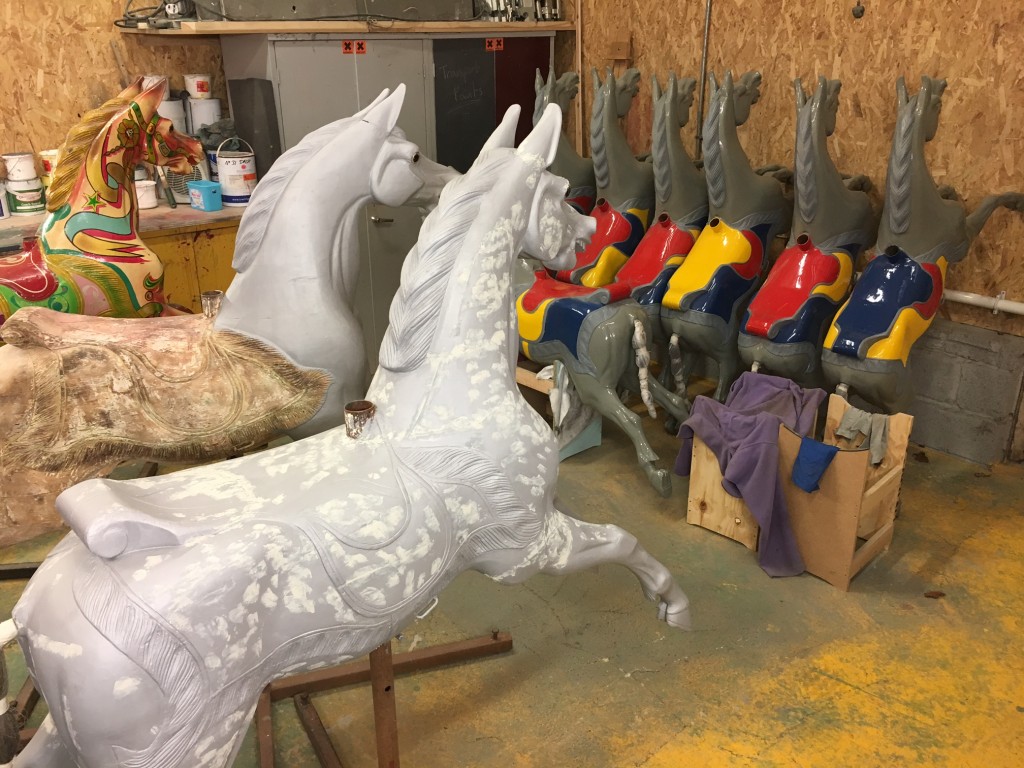 Below: Once free from traffic, 196 was rapidly set about to strip paintwork and uncover the worse sections of timberwork. These largely equate to the areas not tackled last time round, and there will still be some left for a future rebuild as the RHEC only has the tram for four weeks! The work will include patching and renewal of the timber framework, stripping the primrose (cream) colour and repainting this, and hopefully a full re-varnish. 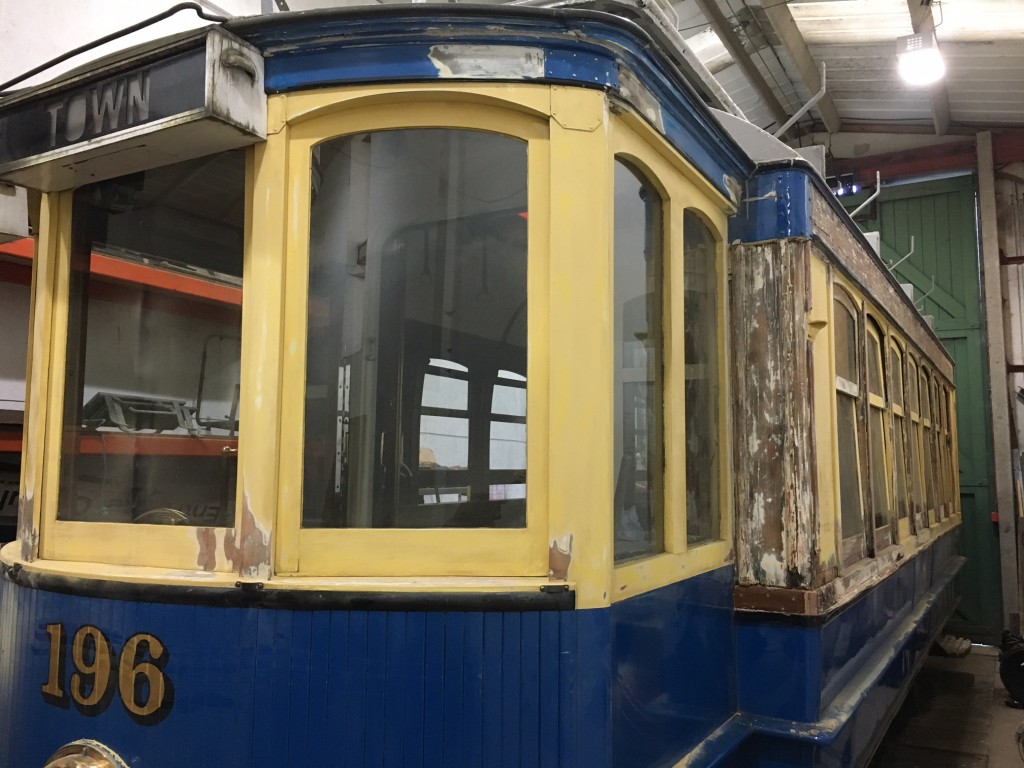 Below: Examples of the rot and the replacement of these sections that is being carried out. Final shaping etc. still required on this section. 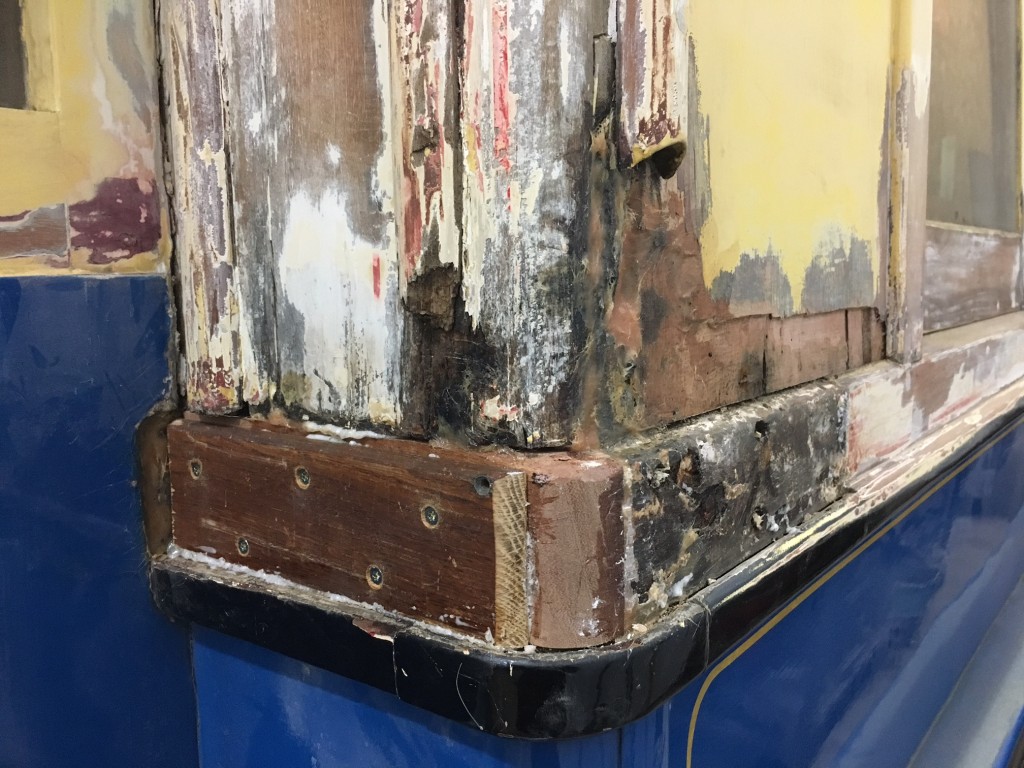 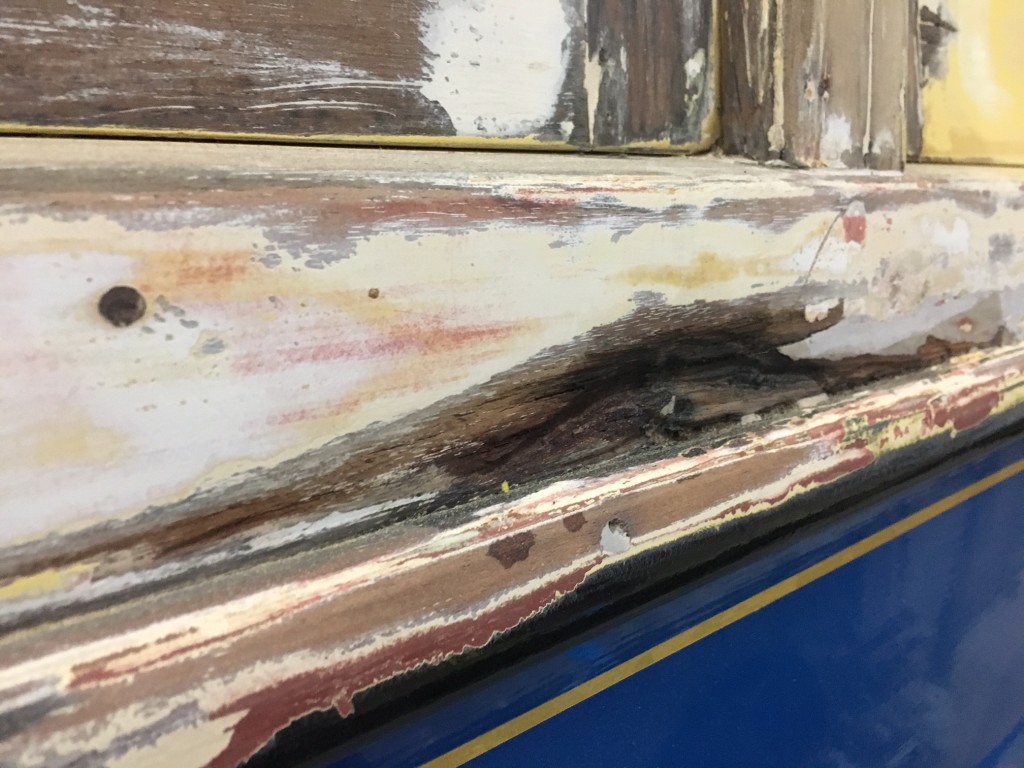 Below: 196 has worked hard, and so the two controllers are also being overhauled by the Beamish Tramway Group for the Museum. 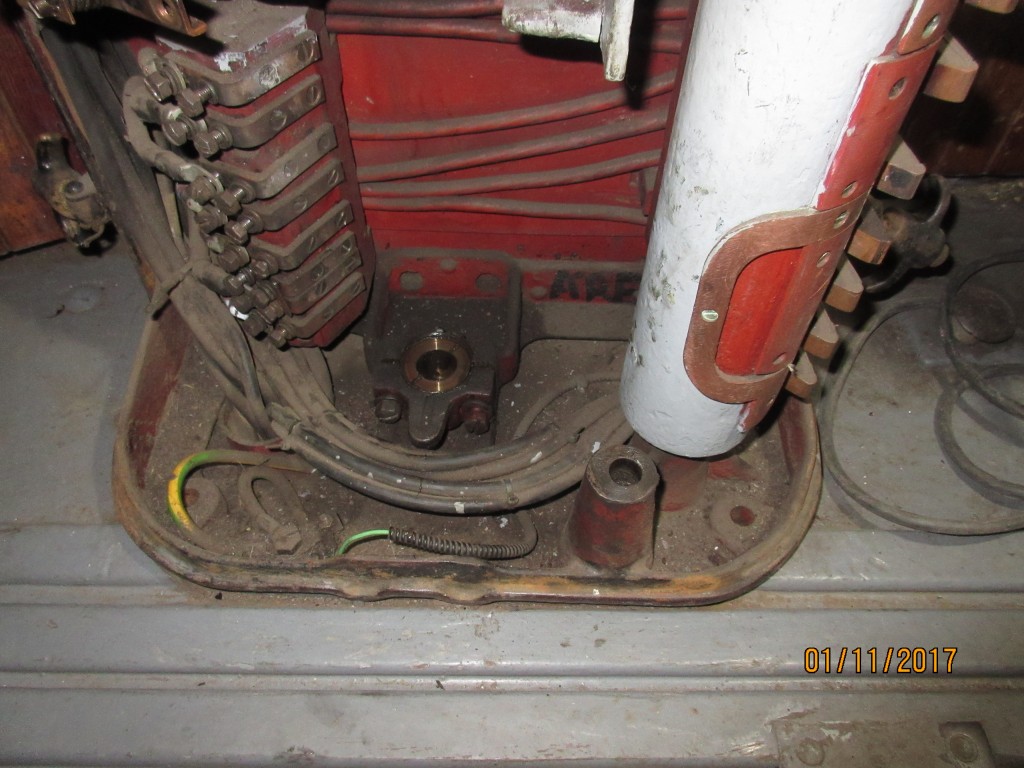 Below: As light relief from painting horses, Rebecca has been working on the brakevan and FR coal waggon, both seen here. David Young continues to work on the chassis for the brakevan and the plan is that both of these, plus the FR side tippers, will debut at next April’s Great North Steam Fair (saving us moving any in on loan for the event as well). 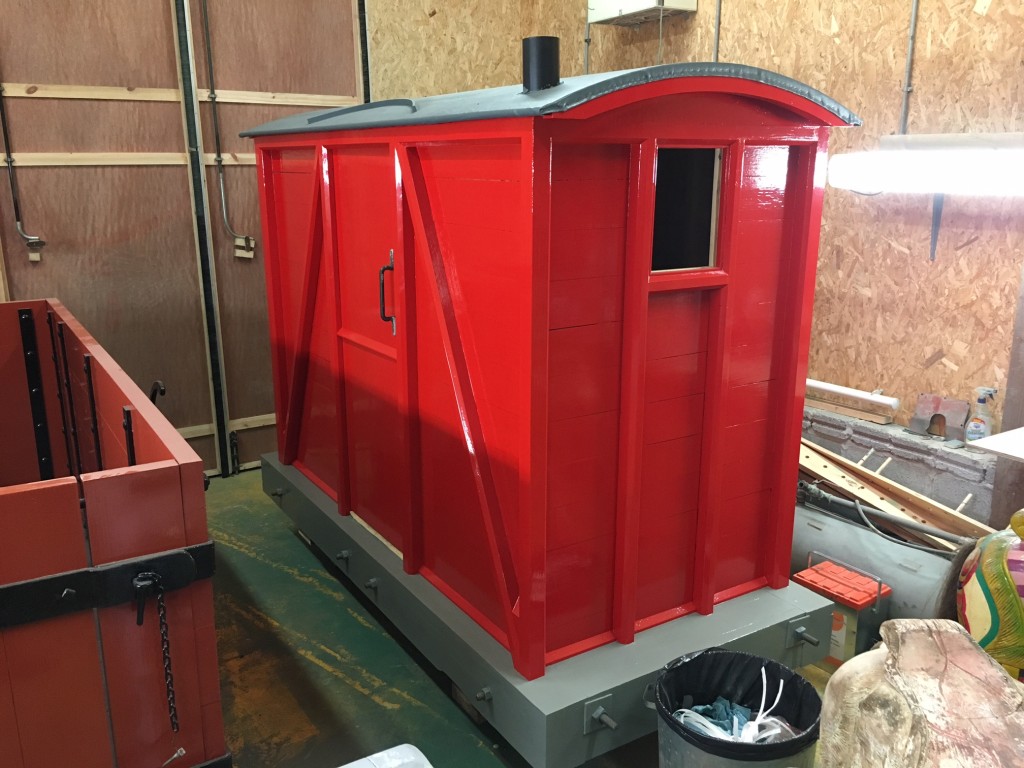 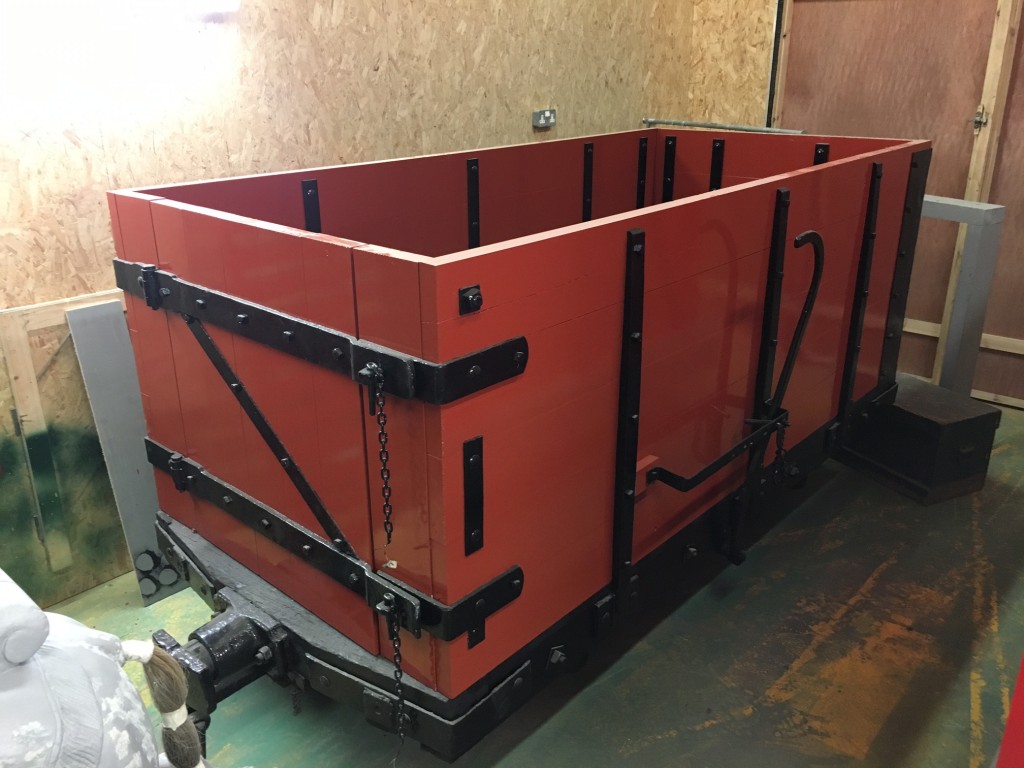 Below: The RHEC produced this sign for the station team, in conjunction with the Friends of the Doxford Engine group. It was signwritten by Sarah Jarman. This will hopefully assist the quite numerous visitors specifically looking for the Doxford marine engine, which whilst not part of our collection is on display within the Regional Museum Store adjacent to Rowley Station and the roadmender’s depot. 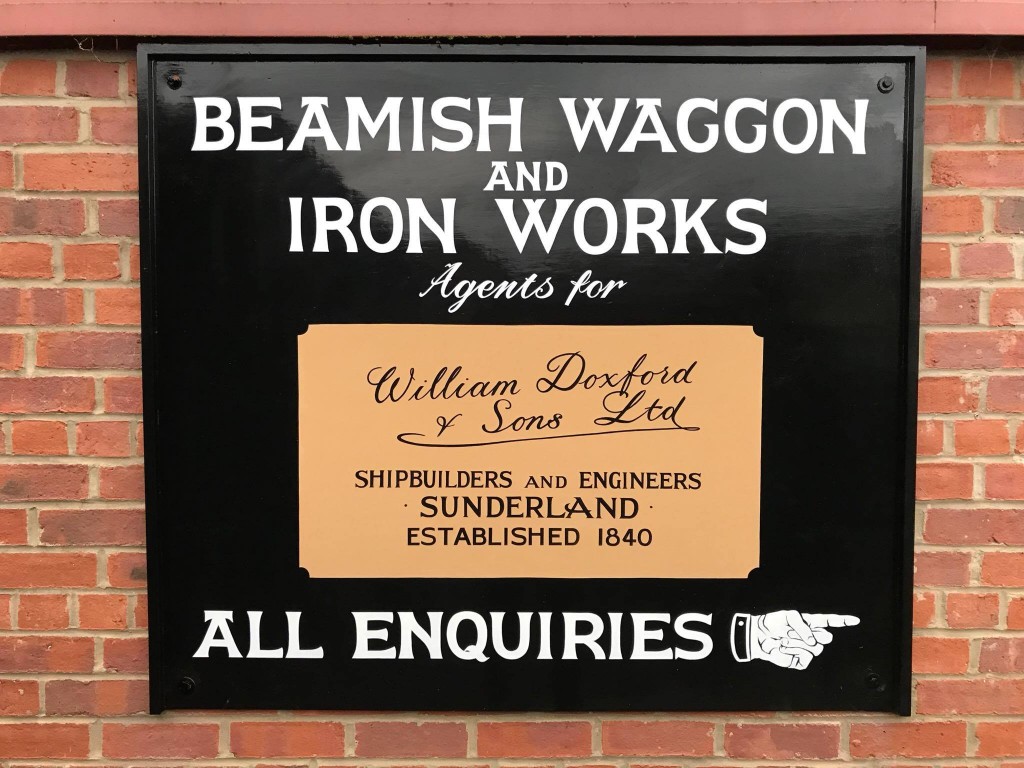 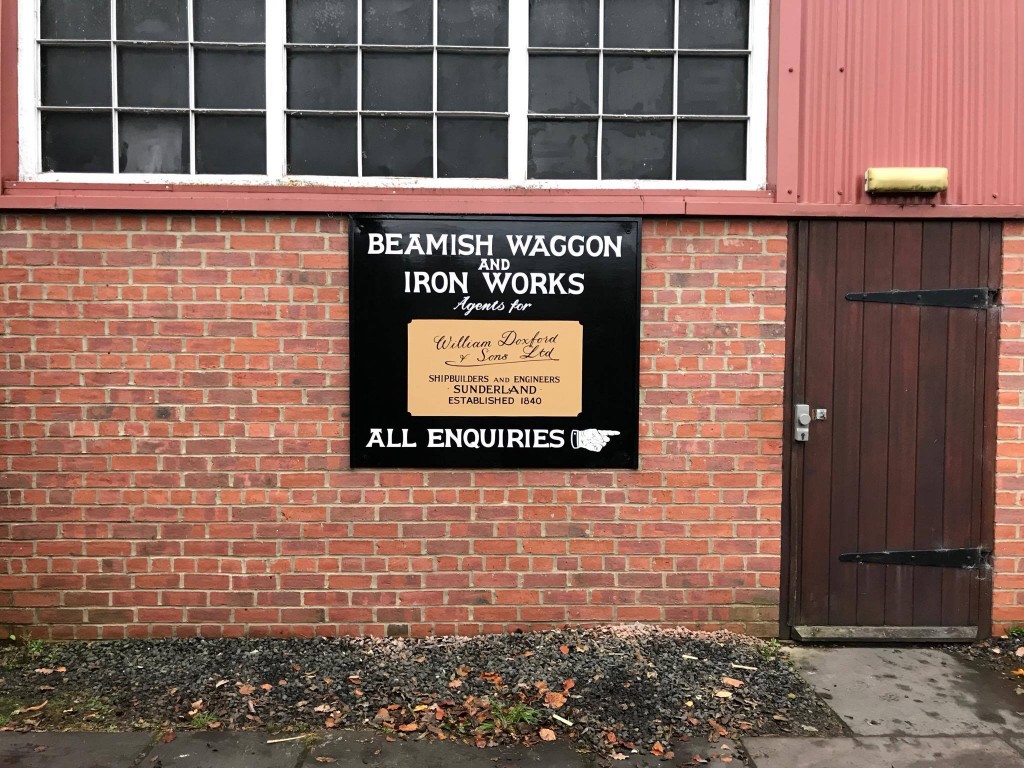 Below: A quick example of the routine work that is undertaken on a daily basis. Russell has been tracing a fault on the B bus, which also included fitting a new slave cylinder on the rear offside. This came via Ebay – a regular source of spares for us. The bus also has a spare engine being rebuilt at present, for fitting in the new year. It will also receive other work on an as-and-when basis, being required for service but also a very high mileage vehicle for the Museum. 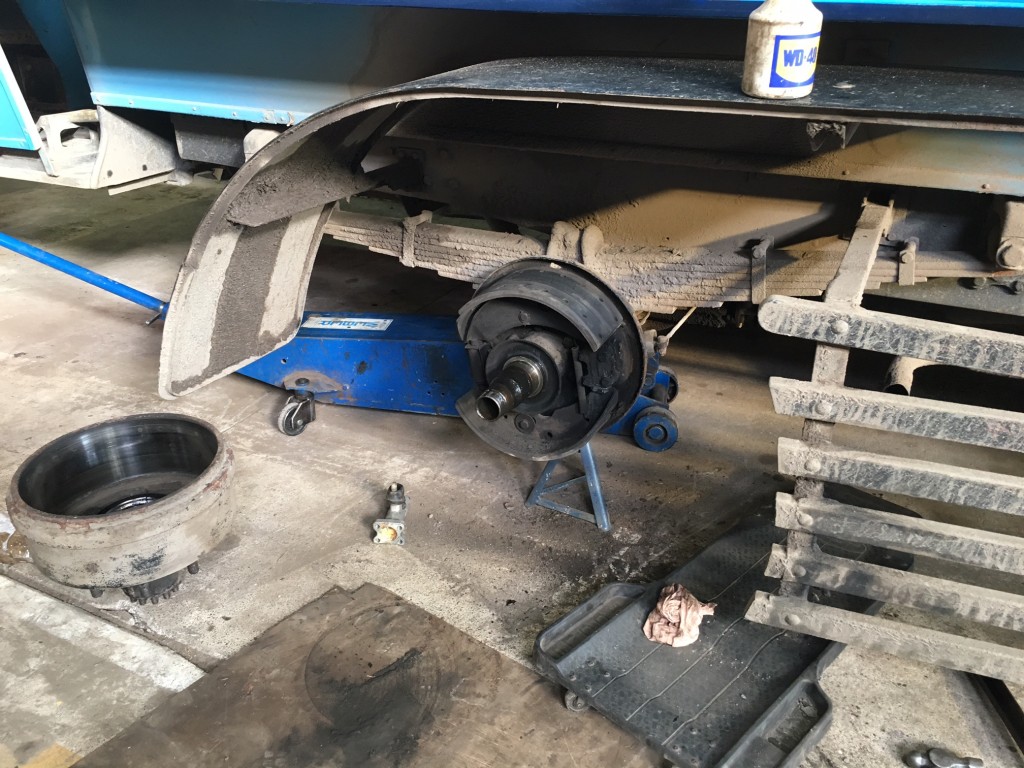