The weeks are becoming busier as the teams get into their stride with the backlog of maintenance jobs accrued over the last year or so.  It is very heartening to see some of the trams mobile once again and we remain hopeful that we will be able to operate a ride of some sort on weekends in the autumn, initially using Blackpool 31 (suited to the ‘circular tour’ title of the proposed operation, of course).

Most staff are still working a restricted number of days, so progress is limited by availability of manpower and also the restrictions of the supply chain – I even understand that concrete is being rationed for construction projects due to the squeeze imposed on demand for it; engineering and distribution of materials and components seem equally afflicted – with either the pandemic or Brexit being cited as the main reasons for delays.  This is frustrating, but it is also an opportunity, as it created a little breathing space, whilst we are not in full-scale operation on site.  However, it is to be hoped that 2022 will be rather better in this regard and that the blockages in shipping/port handling of consignments etc. will be resolved.  Meanwhile, in our own little corner of the World, there is quite a bit of progress to report on this week…

The Beamish Tramway Group have been carrying out more electrical testing to enable tramcars to be shunted around the depot.  Les Brunton, from the group, summarises Monday’s activity here:

We carried out the Covid electrical tests on the other two operable trams today – Sheffield 264 and Sunderland 16.  This is a sort of Lateral Flow Test: quick inspection and adjustment of controllers, swab around the insulation of all circuits with the 1000V Megger, energisation and functional testing of all auxiliary circuits (lighting, compressor, bells), then driving out in a Lateral Flow into the sunshine.  Both trams passed, so, like 31 and 196, all four are now ‘green’ on the Availability Board for Depot movements only.

Below: Les Brunton and Peter Barlow also sent some images of Sunderland 16 and Sheffield 264 to remind us of what they look like! 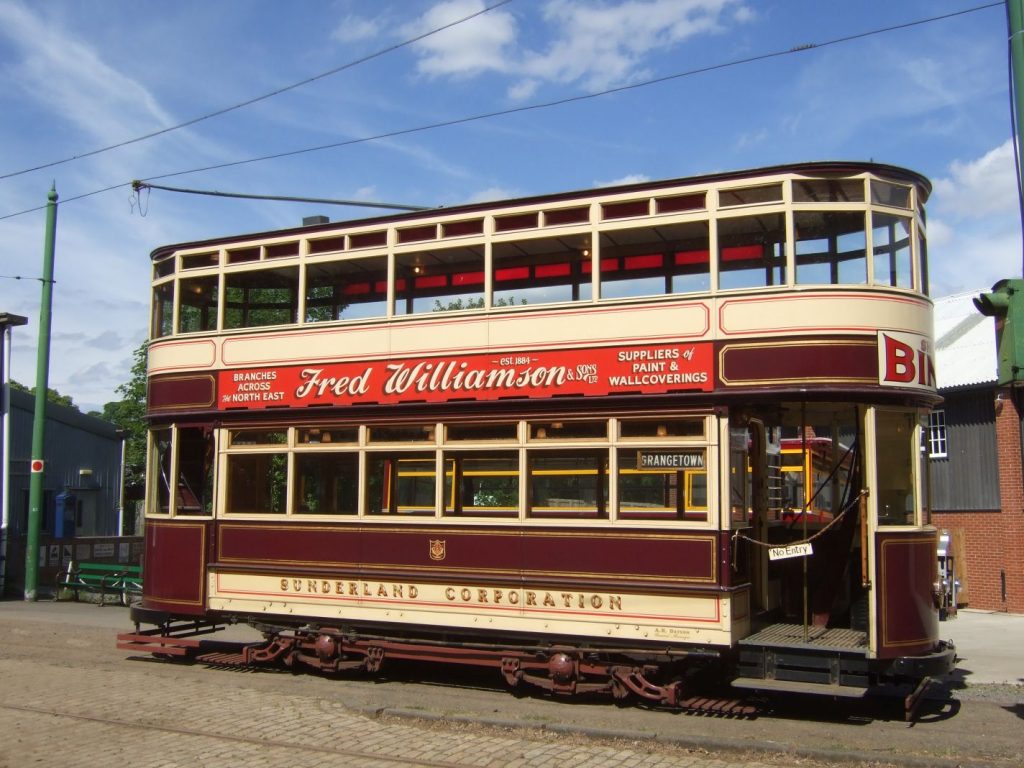 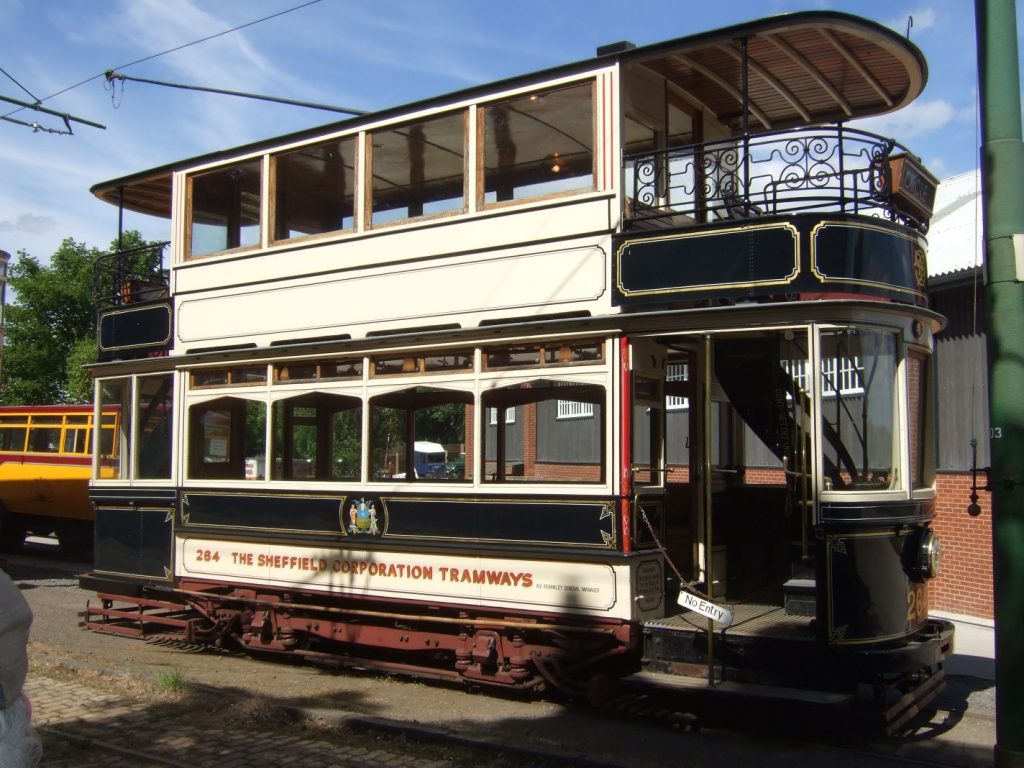 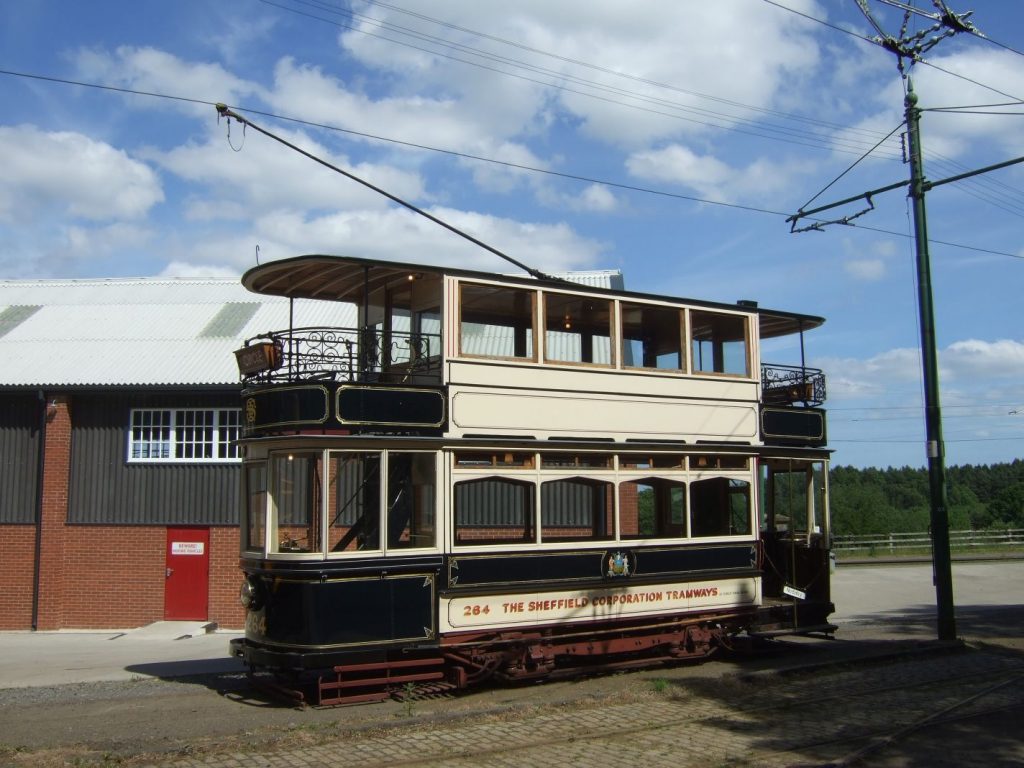 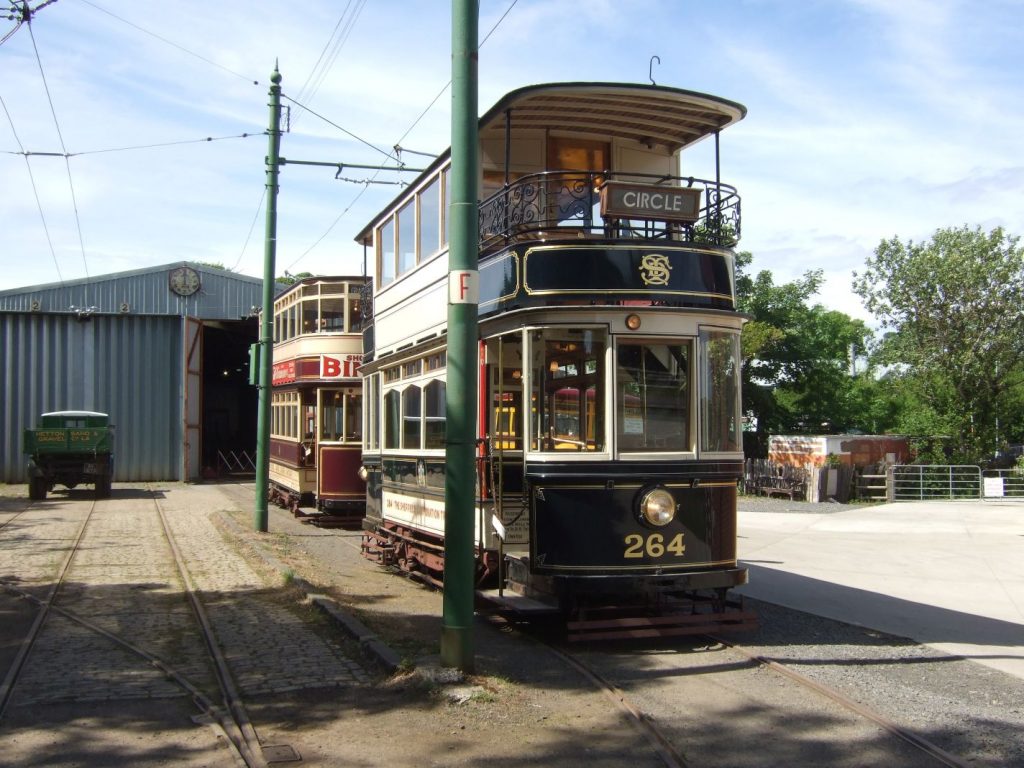 Below: Darlington 4 has had its brake servo removed (it is fitted with a vacuum brake system) in order to enable this to be sent to a specialist contractor for refurbishment.  For now the bus is out of service, with Rotherham 220 and the D-Type bus holding the fort for the daily service pattern currently being operated.  This will increase for the summer holidays so we are hoping for a quick turnaround of this overhaul. 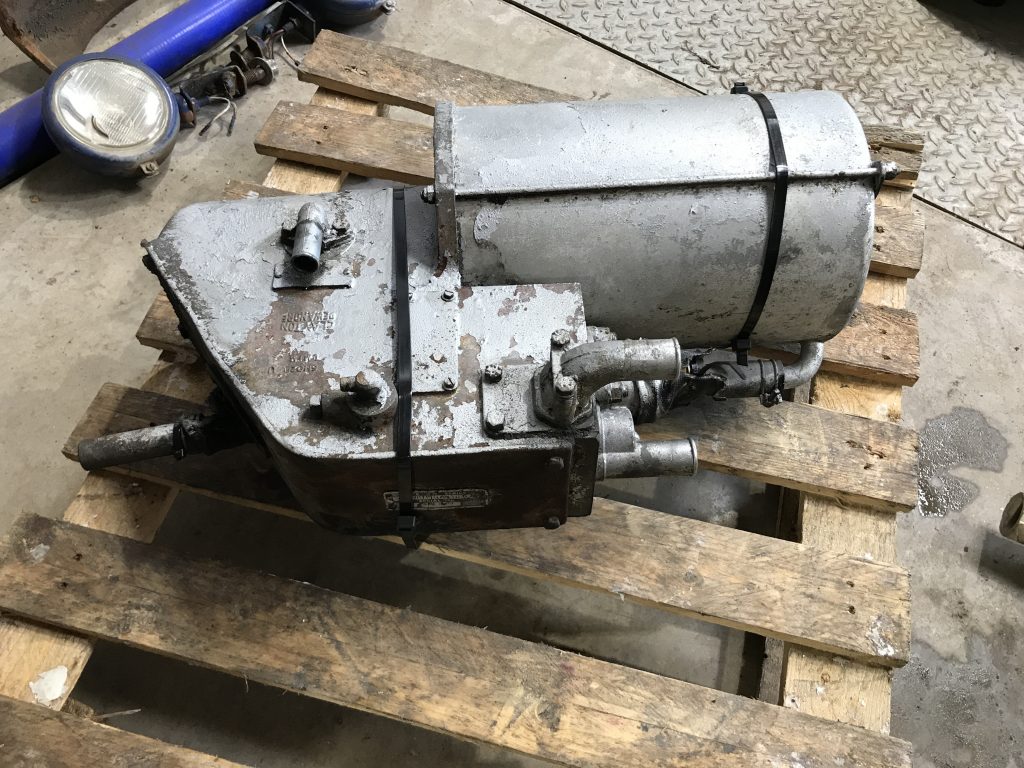 Below: The gap where the offending brake servo unit was located – access is extremely restricted and some novel tooling had to be manufactured in order to liberate pins from their bushes to allow the unit to be removed. 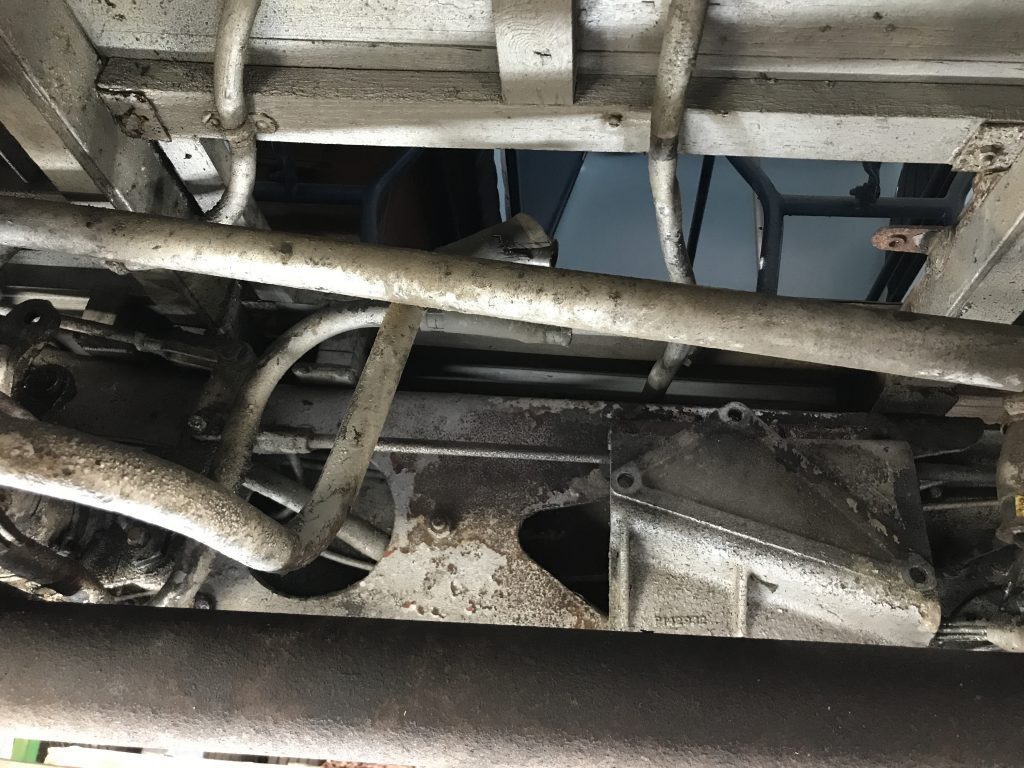 Below: The LGOC B-Type replica is in the bus depot where it is receiving quite a lot of attention to its paintwork.  It spent quite a large part of 2020 outside the bus depot as it was immobilised by the gearbox removal and our lack of any plant on lease to be able to move it.  Rebecca is refreshing the paintwork upstairs and repainting all of the black ironwork on the bus.  There are various other jobs to attend to and some mechanical work outstanding – awaiting suitable spare parts to progress this. 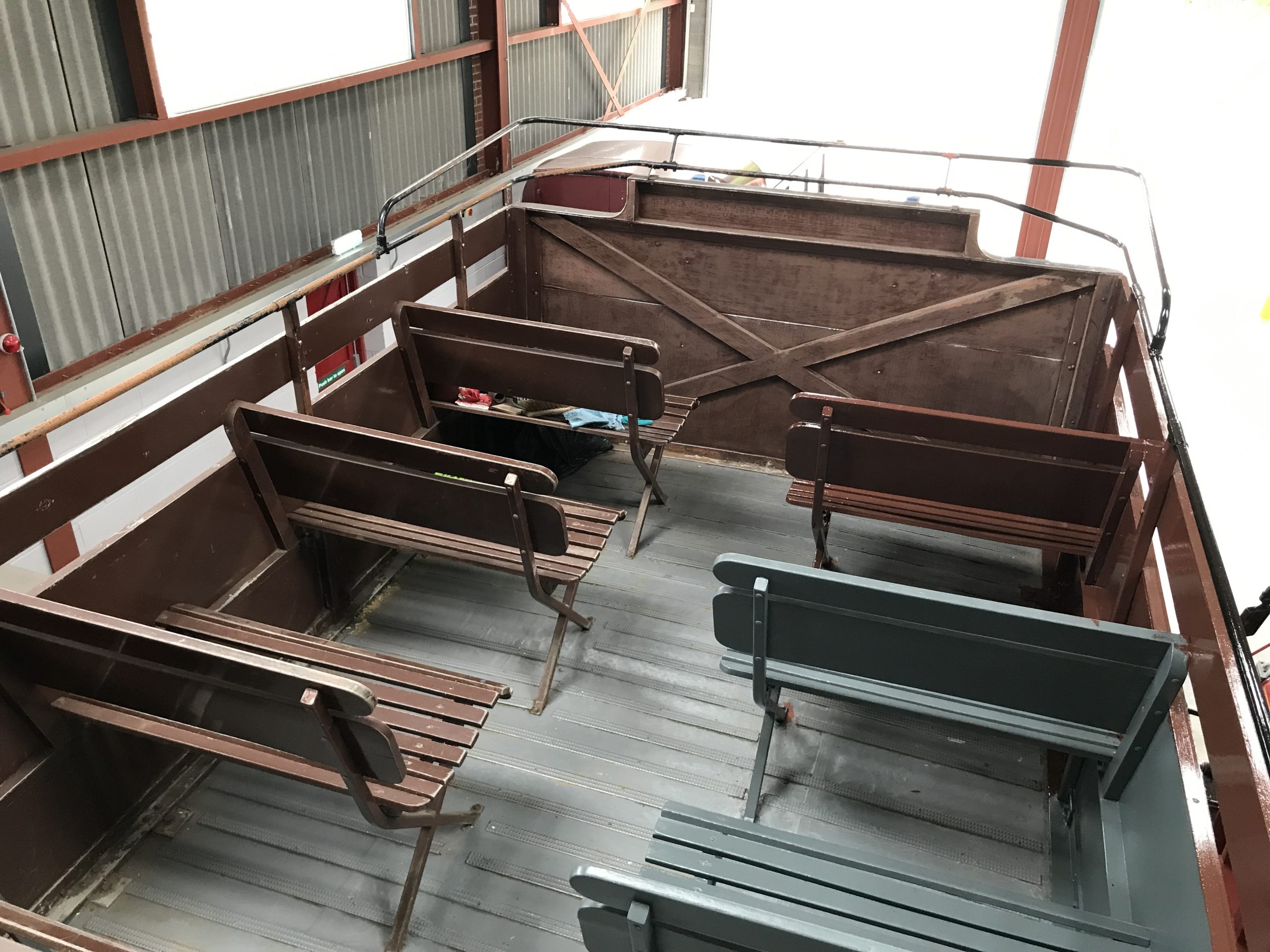 Below: Russell spent a few hours adjusting the brakes on Crosville 716, which testing had noted were under-performing.  This work completed, he then visited the Go North East depot at Consett to place the bus onto the rolling road in order for a Department for Transport brake test (pre 1968 vehicles) to be carried out.  This was completed satisfactorily, the bus returning to Beamish where the commissioning work towards an MoT and entry into service continues.  The bus, given its age, does not require an MoT, but being new, we feel that meeting the minimum national standard (and being able to prove this) is a prudent step to take, and aligns 716 with other buses in operation at the museum. 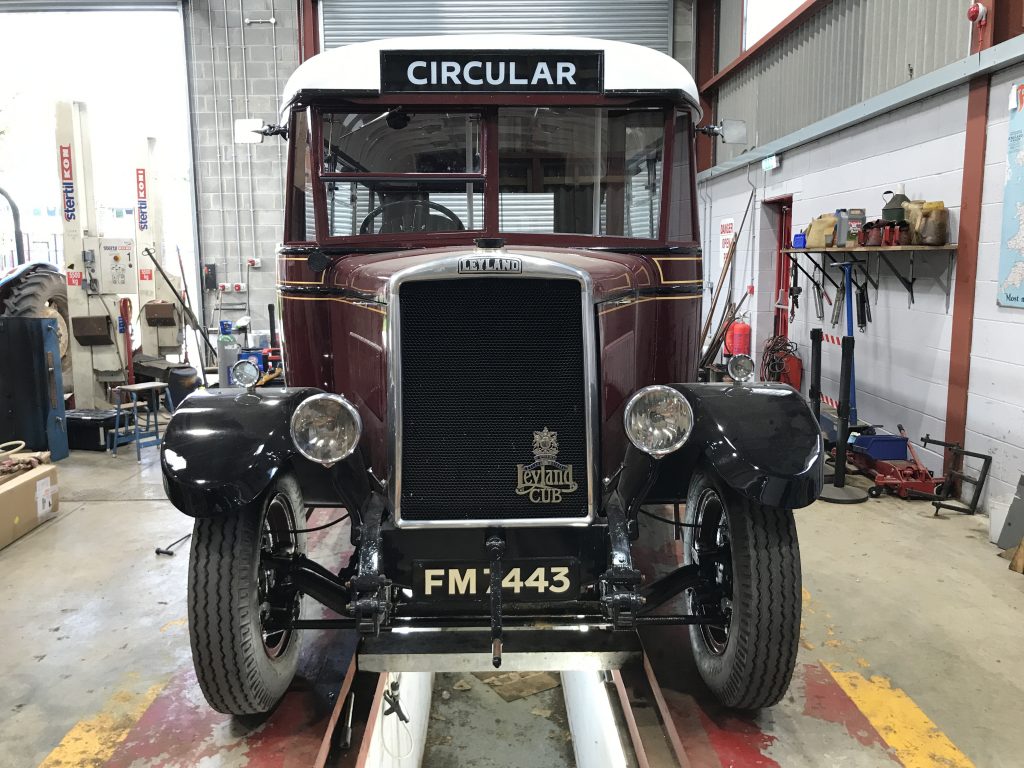 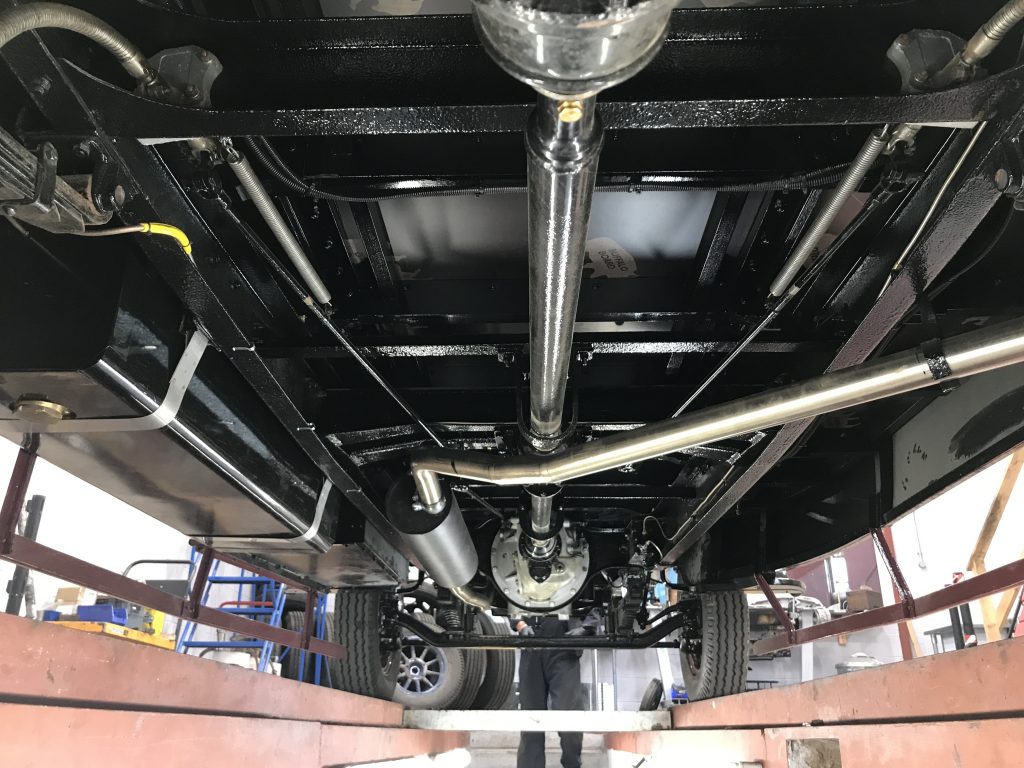 Below: A considerable amount of work is being undertaken on the Fordson Super-Major tractor, with cylinder liners requiring replacement.  The worst, No.1, is shown here, whilst elsewhere in the workshop, Chris and Dan have made a mandrel in order to enable the old liners to be removed.  New wings have also been fitted to the tractor, and a gasket kit will also form part of this overhaul. 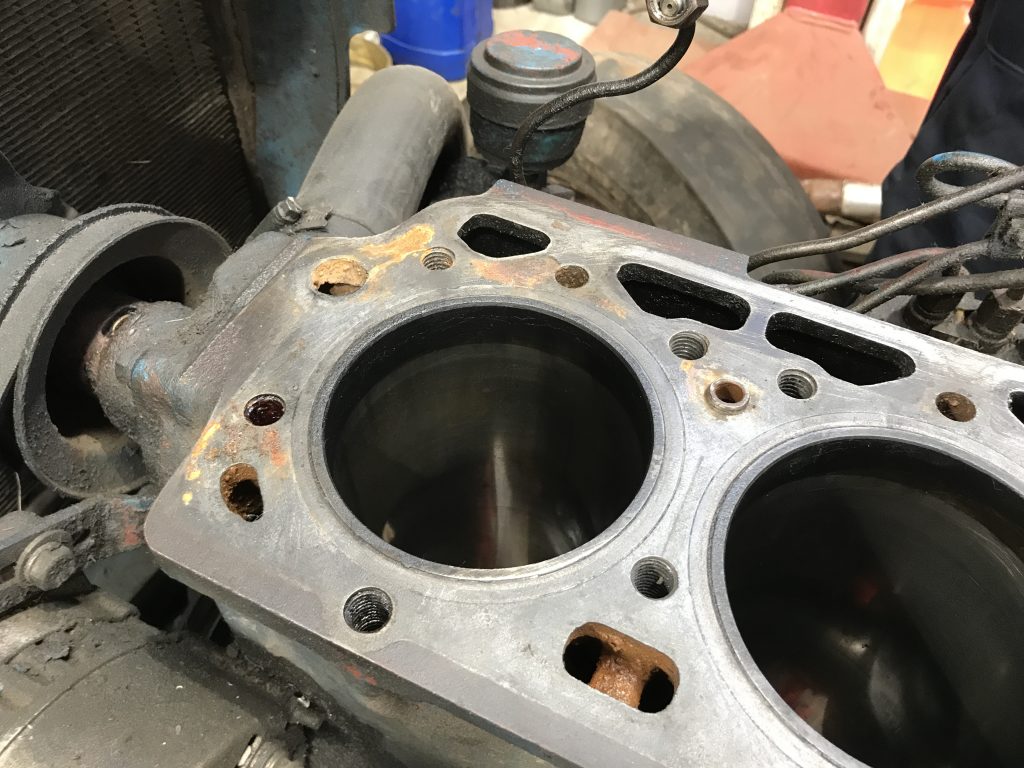 Below:  The liners are of the ‘wet’ type, in that they have water circulating around them, rather than being a full lining of a complete cylinder bore.  Here the engine is seen with them removed, and the spacious cavity within which they sit can be seen, this creating the space within which the cooling water is circulated. 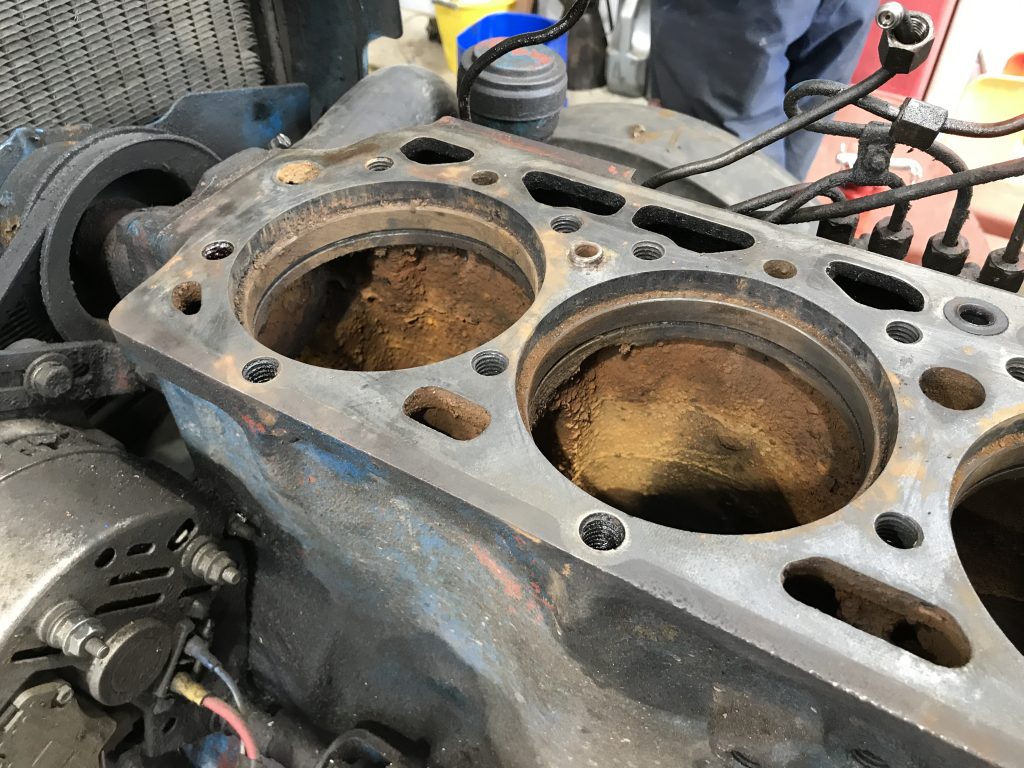 Below: This is one of the liners – note the corrosion where the outer surface is exposed to the colling water. 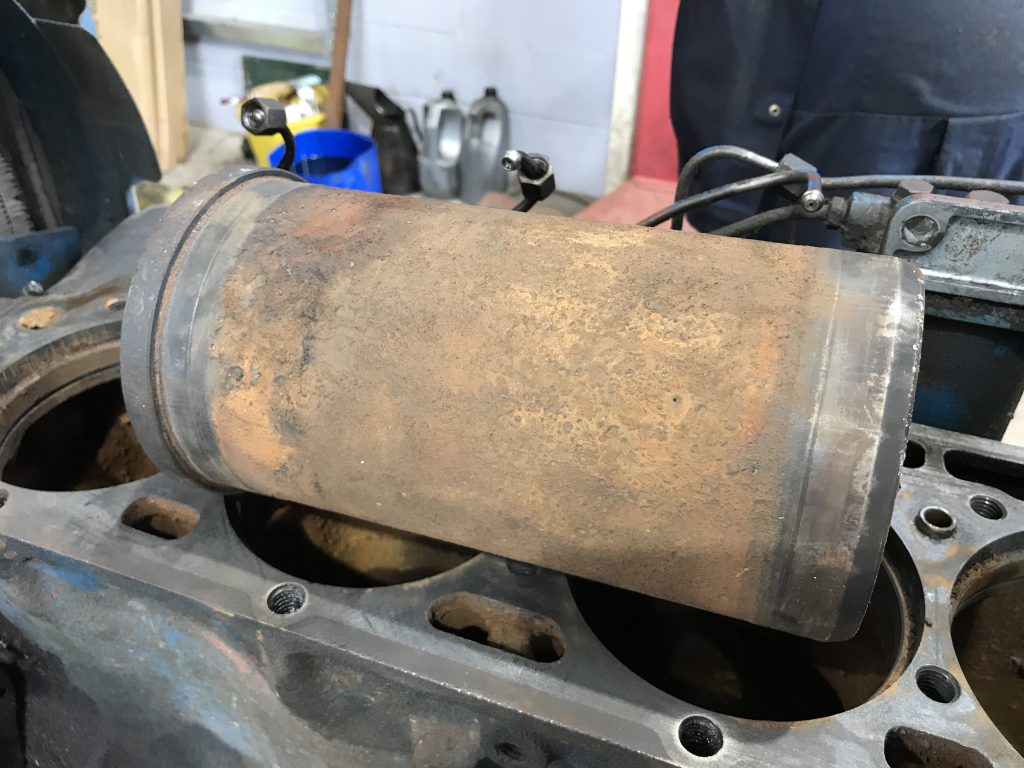 Below: Another view of two liners – note the pitting and corrosion, which results in water ingress and ultimately, breakdown. 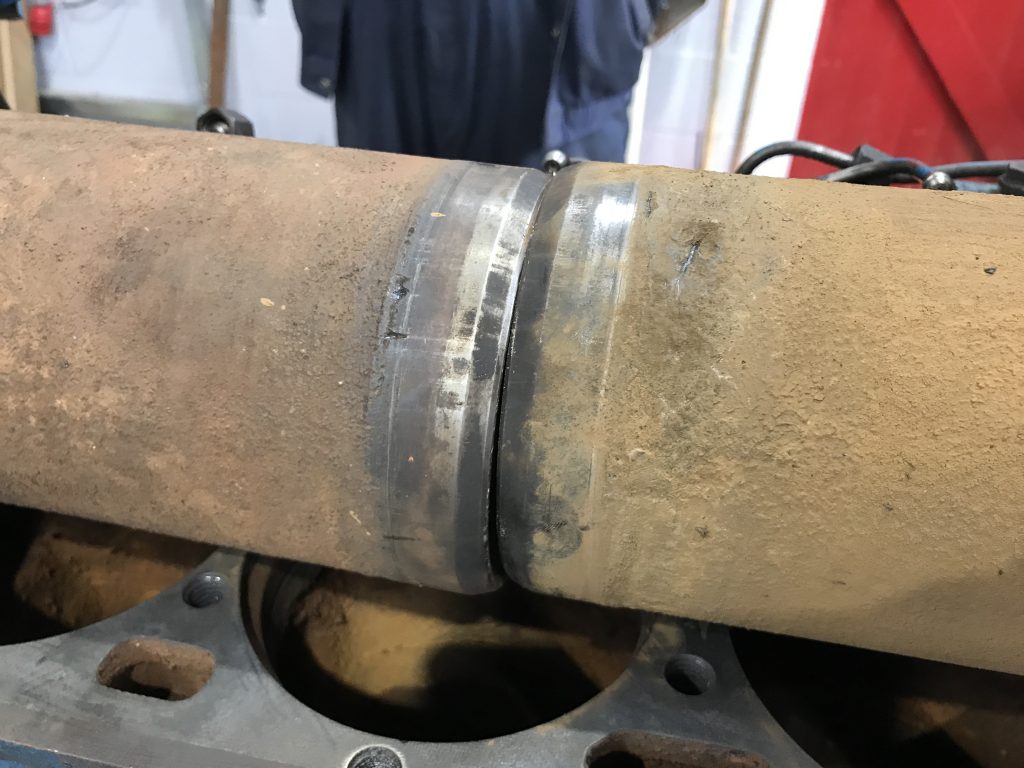 Below:  The trials and tribulations of running a railway…  Puffing Billy has had a further setback, and is currently stopped whilst a review of the braking system is carried out, with repairs/adaptations to be made, documented and tested. Some components have proven to be unreliable, needing a high degree of adjustment and maintenance, so the objective is to improve this situation.

Some work is also being carried out to restore worn thrust plates on the axle pedestals, and to re-set the pedestal spacing depth from the frames.  Being wooden, the frames are subject to distortion and shrinkage, and this correction will replace one made not long after Puffing Billy was delivered to the museum.  The symptom is the flange tips touching the underside of the cylinder wrappers (the wrappers are cosmetic, with castings contained inside them). 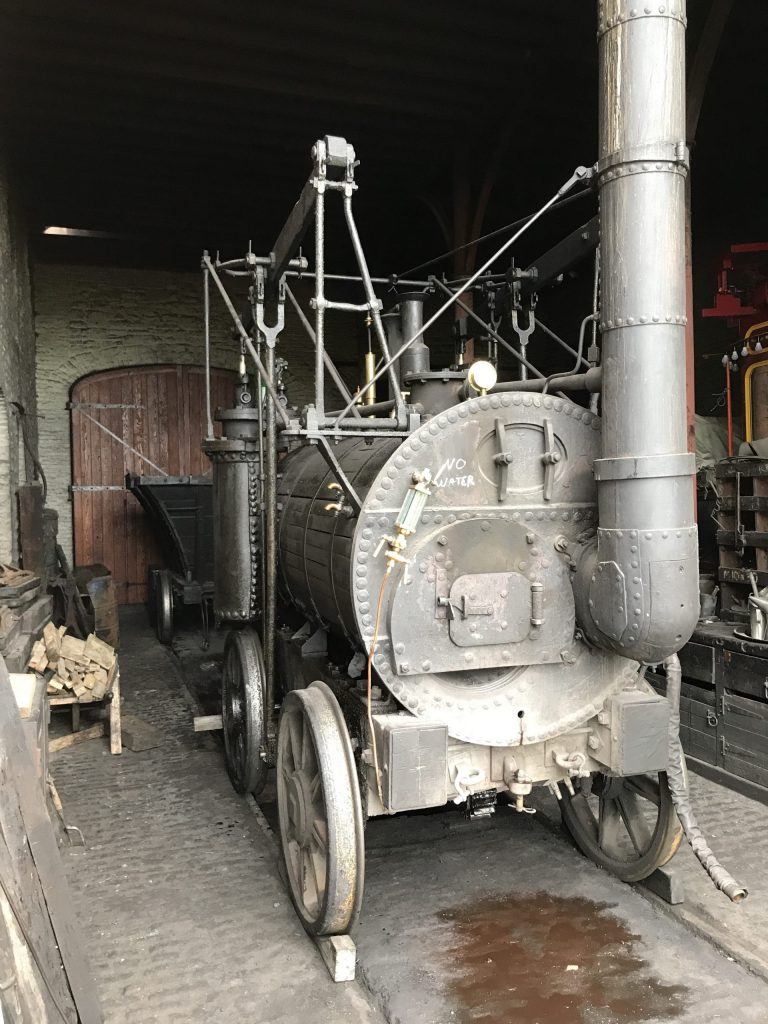 Below: One of the axlebox pedestals, with the new thrust plate visible nearest to the camera.  Shims of 10mm and 20mm are being prepared (each side is different) in order to restore the original tolerances, and these will fit between the pedestal top (seen here with RR written on – Right Rear) and the underside of the frames.  The back of the driving wheel has a machined surface, which corresponds with the thrust plate, preventing excessive lateral movement of the wheelset.  Work will continue next week, as parts and materials arrive. 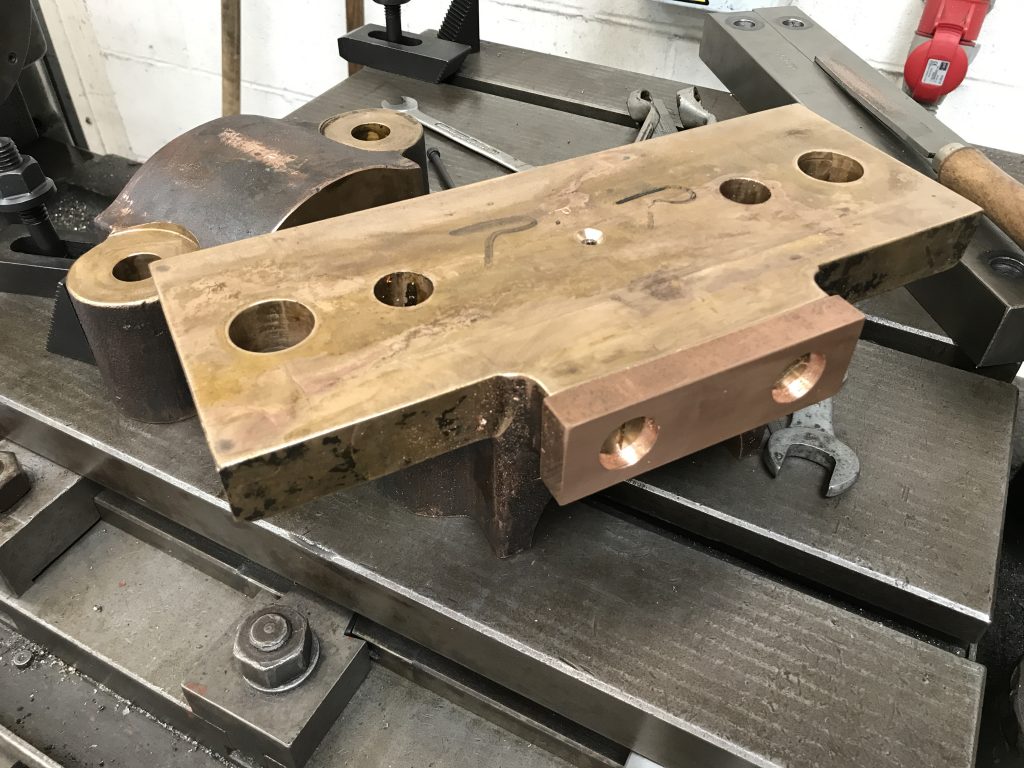 Below: Construction work on the new fence, one of three that is being installed around the Colliery railways, is progressing well this week, with the Pockerley Bottom site being the first to be tackled.  This will enable greater access for visitors watching the narrow gauge railway operation and will save a considerable amount of staff time setting up temporary fencing each time we open this area up.  Similar arrangements will follow in the top yard, to be followed by substantial fencing renewal behind Francis Street cottages, where the existing fence has perished through cottage ash being disposed onto the railway, piling against the fence and rotting the base out.  I must remember to add signs to remind folks not to tip ash in this location (asking has little effect!).  Whilst the latter would have been better in cut-down railway sleepers again, the economies of fitting close-boarded fencing won-out, but it will soon weather into the scene.  The fence below is the structure – vertical boards will be fitted along the whole length to make it a solid barrier and look rather less like a field fence. 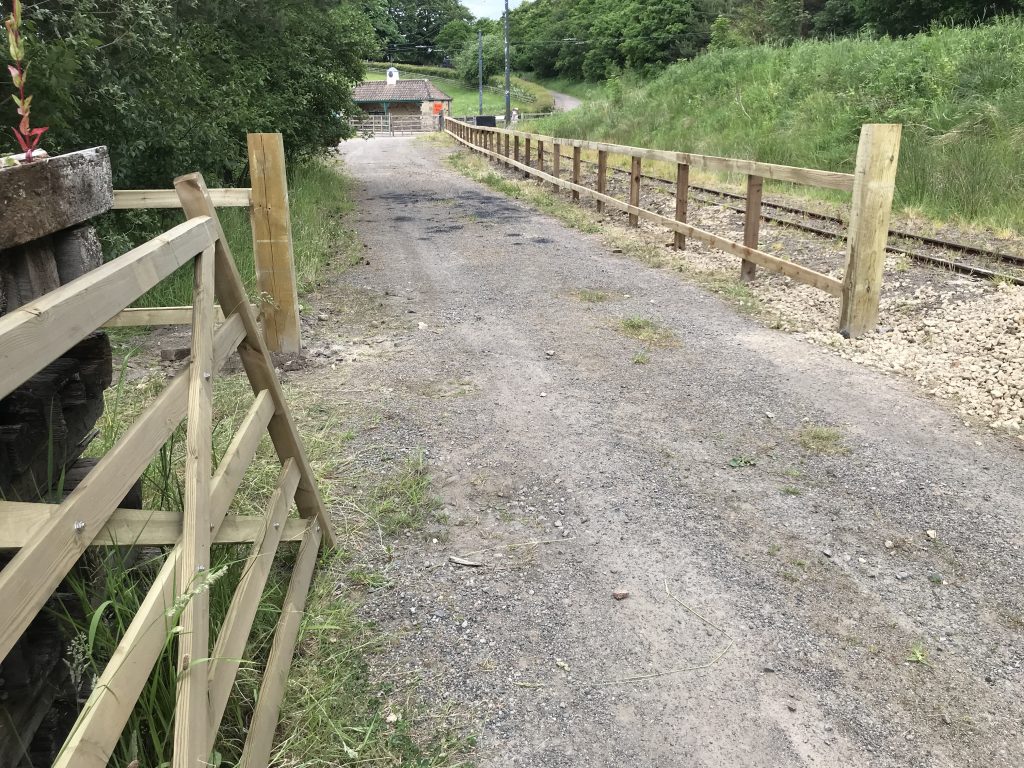 Below: For the last couple of years (when we’ve been open!) we’ve appointed a crossing keeper at Foulbridge in order to maintain safety at this intersection of visitor, traffic arriving onto site (usually food deliveries who insist on arriving after 10am despite our repeated requests, or construction traffic accessing the haul-road to the 1950s site) and tramway/buses.  Without the trams running, life for the crossing keeper (one of the tramway team staff, on a rotational basis to alleviate boredom) has been somewhat quieter, so earlier in the week the task of sorting shop threshold mosaic tiles arrived… Andrea happened to be on duty (though others have also had a go at this puzzle!) and so spent the greater part of her shift sorting buckets of tiles, of different shapes and sizes, into trays in order that these can be reassembled and incorporated into the new Front Street Terrace (in particular, the doorway to John’s cafe). 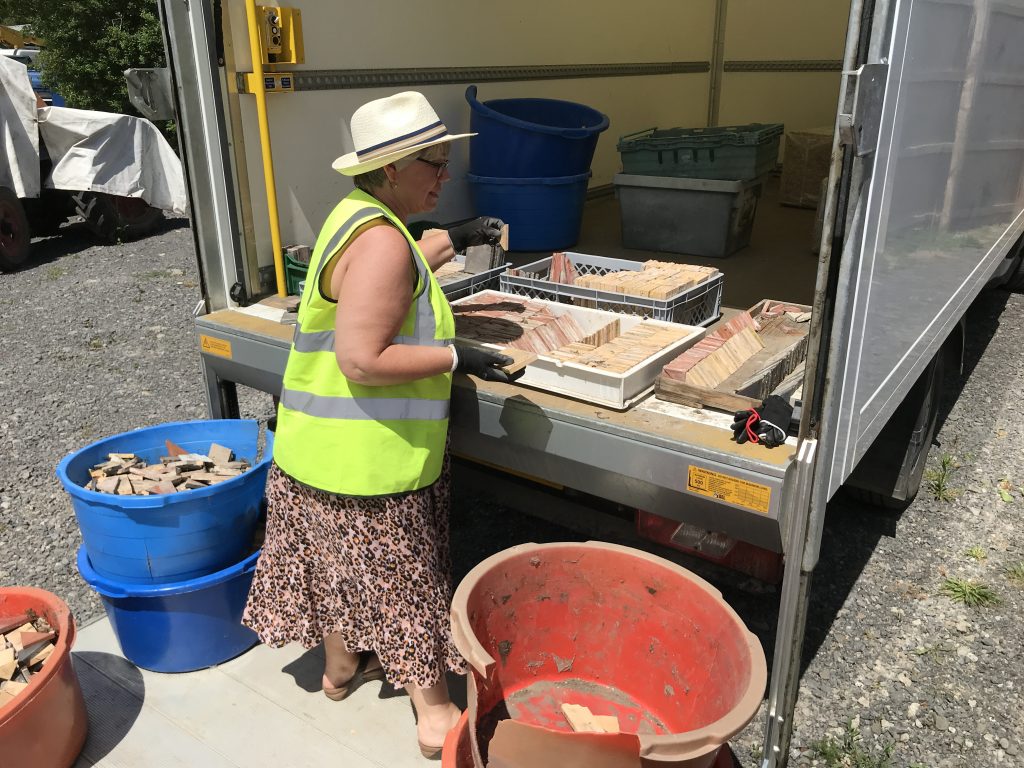