We are delighted to announce that the Association for Industrial Archaeology has made an award of £15,080 towards the £16,756 cost of restoring a 1927 cast iron bus shelter, originally used at Cockerton Green in Darlington.

History of the shelter

Darlington Corporation Transport opened its first electric tramway routes in 1902, having exercised its right, under the 1870 Tramways Act, to purchase the existing operation, which was in the hands of the Stockton and Darlington Steam Tramways Company.  Despite the title, only horse trams were operated in Darlington, and these can trace their lineage back to the pioneering and experimental horse tramway opened by the Darlington Street Railroad Company (under the patent rights of George Francis Train) and which ran between 1862 and 1864.

The technology of introducing what was essentially a railway line to the streets (without it being safely encapsulated within the road surface) had killed off this experiment, but in 1880, with more appropriate permanent way, horse trams were once again in operation on three routes (including one to Cockerton) from the Market Place in Darlington.

The electric tramway was a new system on the footprint of its predecessors, being 3 ft. 6 in. gauge (the horse tramway was 3 ft. gauge) and covering four routes, again including a terminus at Cockerton. The route to Cockerton was single track, with passing loops.  The electric tramway then settled down to an uneventful operation, though in the early 1920s its deteriorating condition was a cause for concern and led to new technology being considered with which to replace the tramcars and tramway.

In 1926 the first trolleybuses began operating in the town, replacing the trams and extending the routes (in line with the growth of the town) to new areas which were once very much in the hinterland of Darlington.  Cockerton was once again served by another form of passenger vehicle, and just a year later the modernisation saw the installation of a new bus shelter at Cockerton Green, adjacent to the road junction at the Travellers Rest pub. 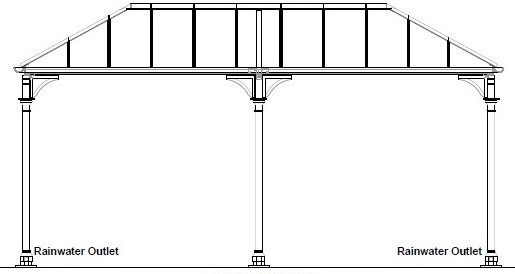 This bus shelter has a number of elements that make up its significance within the collection at Beamish:

Though the bus shelter does not have any moving parts, it is very much an element of the working transport collection and to this end, the attitude statement for working transport objects at Beamish is applicable: An artefact which might be considered for regular operation and therefore requires a good degree of availability but is not necessarily part of a core operation

A set of drawings has been prepared (RIBA Stage D standard) for the project, from which the above extract was taken.  The full plan includes each of the (somewhat similar!) elevations as well as a plan drawing and details of the corner brackets, roof structure and guttering: 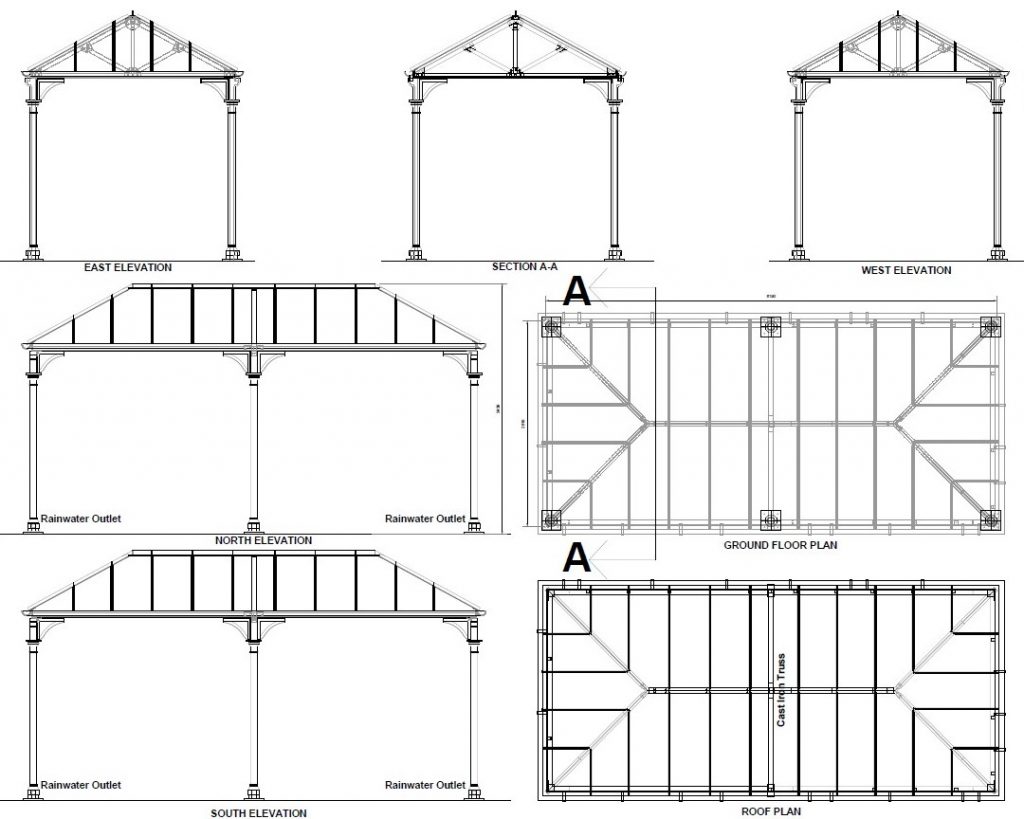 At present, the bus shelter is in dismantled condition, having been received by the museum in 1972 in this condition.  One of the cast iron columns has been broken, but fortunately remains with the other components, as seen below: 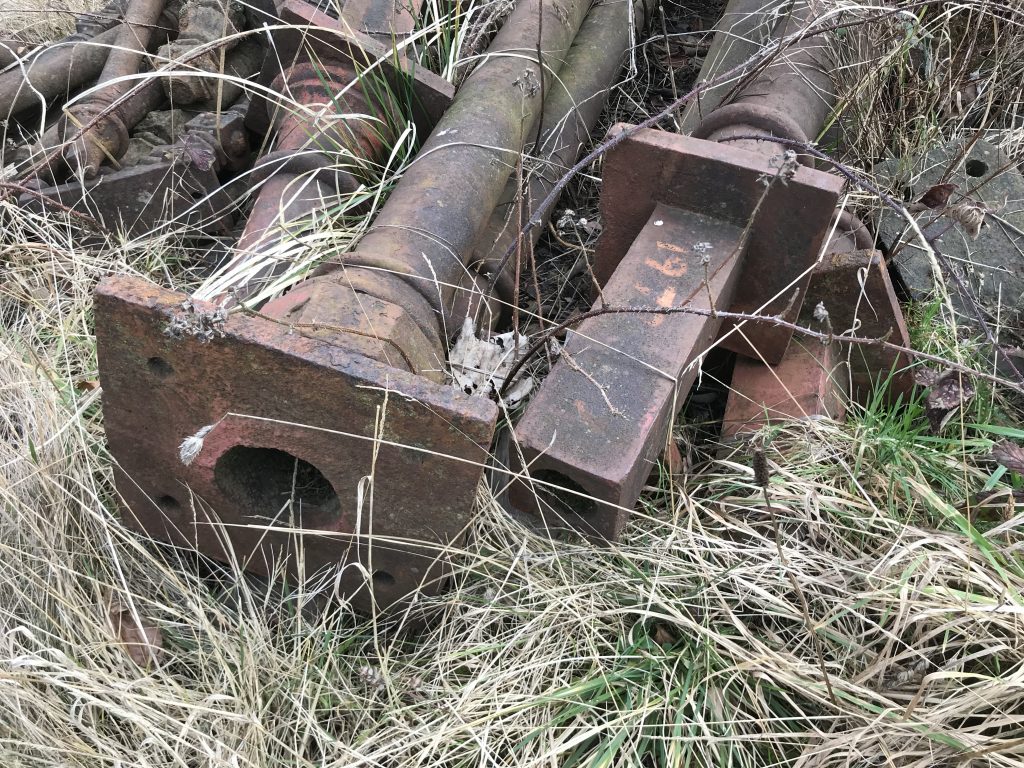 Below: The stored components have been kept in various locations since 1972.  In this view, the columns can clearly be seen, along with the roof truss (see drawing) that forms a major part of the roof structure.  This will be restored as part of the project. 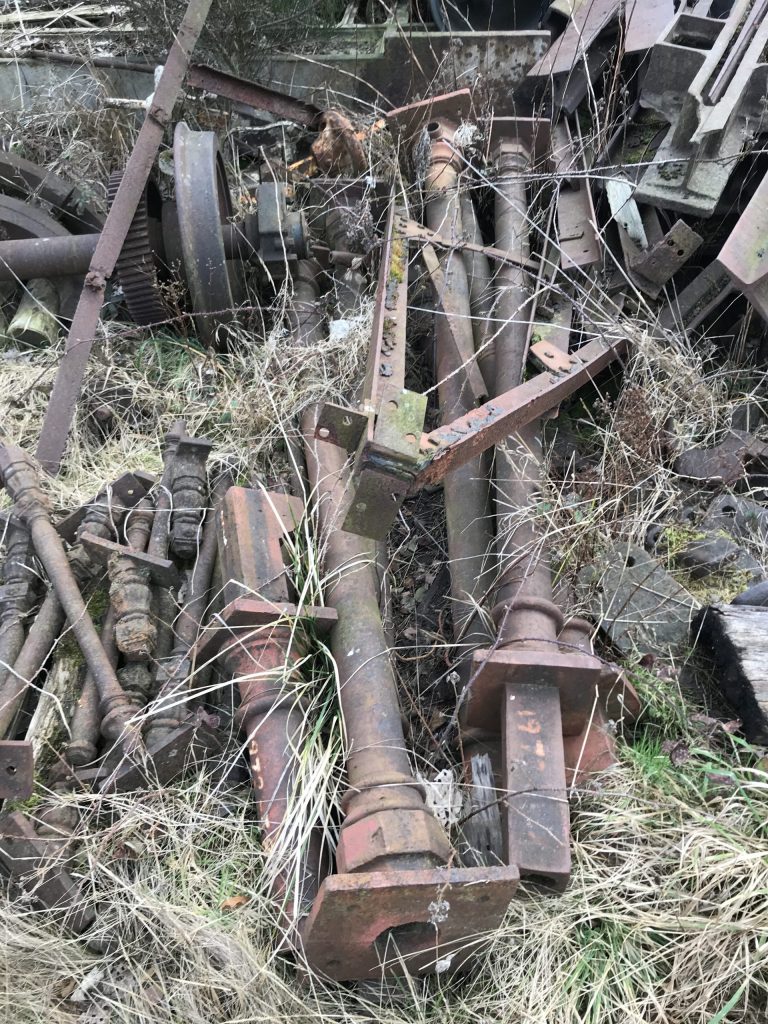 As part of a project like this, we aim to create a Conservation Management Plan (also an integral part of the grant application process).  The extracts above are taken from this, but a section also deals with the restoration methodology.  I thought that readers might like to see what sort of information this contains, so I’ve included the relevant section below in the hope that it may be useful/interesting…  In due course I intend to produce a post on the guidelines that Matthew Ellis and I wrote, covering working (transport/mechanical) collections at Beamish, and which may also be of use to others and which I quoted from earlier in this post.  For now though, here is the methodology for the bus shelter restoration:

The approach to restoring the bus shelter follows a well-trodden path for working collections at Beamish.  The intent is to enable the object (in this case the bus shelter) to retain or re-acquire its original function, whilst retaining as much of the original material as is possible.  The aim is always to ensure that the object can do this both safely and with a high confidence in its longevity.  A relatively robust and simple object such as a bus shelter is therefore covered by five statements, listed below and which have been individually considered by the author to create a bespoke Conservation Management Plan for this specific object.

There are six components of cast iron creation, with one of these broken into two pieces.  These are at the core of the original bus shelter and so all six are to be retained, with the broken column to be repaired.

The columns will all be shot-blasted to remove rust and organic material, which will enable a comprehensive assessment of the condition of the castings to be made. The broken castings will be bored internally and sleeved – this provides structural strength and rigidity (essential for a structure under which people will stand), retains the through flow of water from the gutters and will allow a full weld preparation to restore the two pieces to one.  The weld will be dressed so as to be invisible, and recorded on the file.  The base of each column will be machined to restore a flat surface (lost to oxidisation) and allow for safe anchoring onto the pavement when complete.  The weld repair will also be tested by Non Destructive Testing (NDT), by the Magnetic Particle Inspection (MPI) process – this is to further ensure its structural integrity.  The failure of one column wouldn’t just be a risk to people, but could also jeopardise the rest of the shelter, so it is prudent to take these simple steps to safeguard against failure at this stage.

The original roof structure, other than the central truss, is missing.  From the truss, we can determine that the other components were made from T section steel, with bolted flange plates and gussets being used to attach each section to the next.  The remaining truss is in poor condition but is repairable, by cutting out corroded T sections and replacing these with new steel whilst retaining the gussets and brackets as a datum.  The roof structure was also the means by which the glazed roof panels were secured within the canopy and this was again achieved using T section. The glazing would have been held captive by the assembly of these components and sealed with glazing putty.  An alternative to linseed based putty would be considered acceptable in order to ensure longevity of these joints and the need to ensure no items fall onto members of the public standing within the shelter.

Replacement of any item will be on a like for like basis.  The principle material missing and requiring replacement is steel (see section 2 and 4), whilst the largest is glass.  The glazing of the panels will use safety glass, to conform to the applicable standards for near-horizontal glazing panels in a public area.  If possible, wire reinforced glass will be sourced, otherwise the glazing must display the opaque qualities found in structures of this age and which were exposed to acid rain and fossil fuel pollution.

Nuts, bolts and washers – imperial sizes will be sourced from Beamish stock.  If items are required, then these will be adapted to remove any modern markings impressed upon the bolt heads.  These items will be primed and painted before and after their installation within the reassembled bus shelter (a trial assembly will be carried out as part of the restoration).

In addition to the roof structure described in section 2, and glass in section 3, there are a 12 angle pieces to make and fit.  One of the originals remains to use as a pattern and which can be incorporated into the final assembly.

Gutters – these would have been cast iron and new components to traditional style and made by the casting process are available from Longbottoms foundry in Holmfirth.

The shot blasted components should be zine etch primed, before two coats of undercoat, two coats of topcoat (more if required to build depth) and a coat of varnish are applied.  The colour will be Darlington Corporation blue, applied using enamel paints (either Craftmaster or T & R Williamsons to enable continuity of supply for repaints in the future).  A sample of this paint should also be placed within the object file, recorded alongside this Conservation Management Plan.

The bus shelter will be installed onto a level, flagged surface with adequate run off provision for drainage.  It forms part of the trolleybus/motorbus route design process and will be accompanied by appropriate signage on traction poles (for bus stop and conditions of carriage) as well as period street lighting.  Once installed it will be subject to annual washing (along with other street furniture at the museum).  Repaints must refer to this CMP for guidance on colour and paint source.

Damage will be reported to the curatorial department, and is likely to be paintwork related as the physical positioning away from the curb edge and with barriers between the shelter and the road should protect it from any vehicle-inflicted damage.

No signs or notices should be affixed to the cast iron columns and any signs acknowledging the AIA’s support of this project will be in period bus timetable displays fixed to the adjacent fencing (to the rear of the shelter).

The components will shortly be removed to North Bay Engineering Services Ltd for restoration.  The dismantled shelter will then return to Beamish in early 2022 for painting and completion of detailing work.  It will then wait for the completion of the bus-bay to the rear of the 1950s town and south of the Edwardian town area, where it will then be installed.  I look forward to being able to photograph our Daimler, Darlington 4, alongside it at that point!  The shelter will give countless pleasure (even if it is sheltering from the rain!) to our visitors, and will form an integral part of the transport infrastructure at Beamish.  After spending fifty years in store in the museum collection, it will also be a very timely restoration and one that I am very much looking forward to seeing completed.

I know of a number of archive views that feature the bus shelter, so I hope to obtain copies of these with permission to reproduce them here – if anyone knows of, or has, a photograph showing the shelter that they can give copyright permission to use on the blog, I would be very pleased to hear from them…