In various posts in the recent past I have alluded to our review of all things operational and events.  We are now finalising our events programme, and can announce some dates for transport-themed events in 2022.  More dates will follow for the Classic Car days and military themed event, building on the success of Dig For Victory in 2021.

We have moved away from the Great North Steam Fair format, partly on cost grounds, largely on organisational resource grounds and an element of lessons learned about the success (and comfort) of running a shorter and less intensive transport event in September 2021.  We have split the four-days into two separate events, in the spring and late summer, to enable us to increase the range of activity across the year and also separate some of the motor vehicles from the steam side.

The difference in travelling speed of each technology has caused congestion in the past and required quite careful management.  However, recognising that the mix of transport types has always appealed, and that seeing steam alongside other road traffic is part of the spectacle, we are inviting a number of pre-1930 internal combustion vehicles to help further animate the scene.  In September we will still have steam, but a focus on post-1930 road vehicles out and about on the museum’s roads.  We can also look forward to using the first section of 1950s road this year too.

In 2020 we had planned for a heavy-haulage theme, and were very disappointed that the event had to be cancelled as the national lockdown arrived.  A highlight was due to be Alex Sharphouse’s Fowler B6 Talisman – so in 2022 it will make this much anticipated debut at Beamish.  To add to the appeal, it will have some company – in the shape of a number of fellow Fowler road locomotives to recreate the recent scenes below, when a trio of engines carried out a road-haulage run in Cumbria using Alex’s Dyson trailer.  This will also be attending the event and subject to confirmation, these engines plus a number of others will add to the haulage theme on the museum’s roads.  There will be  more details on the invite list, as engines are confirmed, in due course.  Meanwhile, it is a date to add to the diary.

With thanks to David Warren for supplying the images of the run below and in the header. 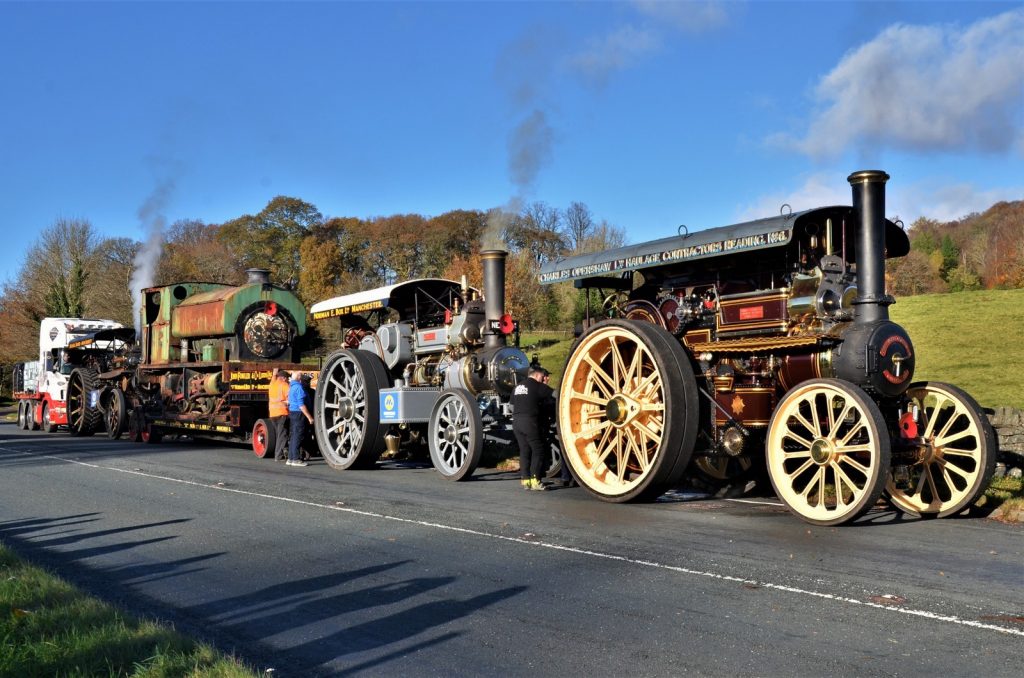 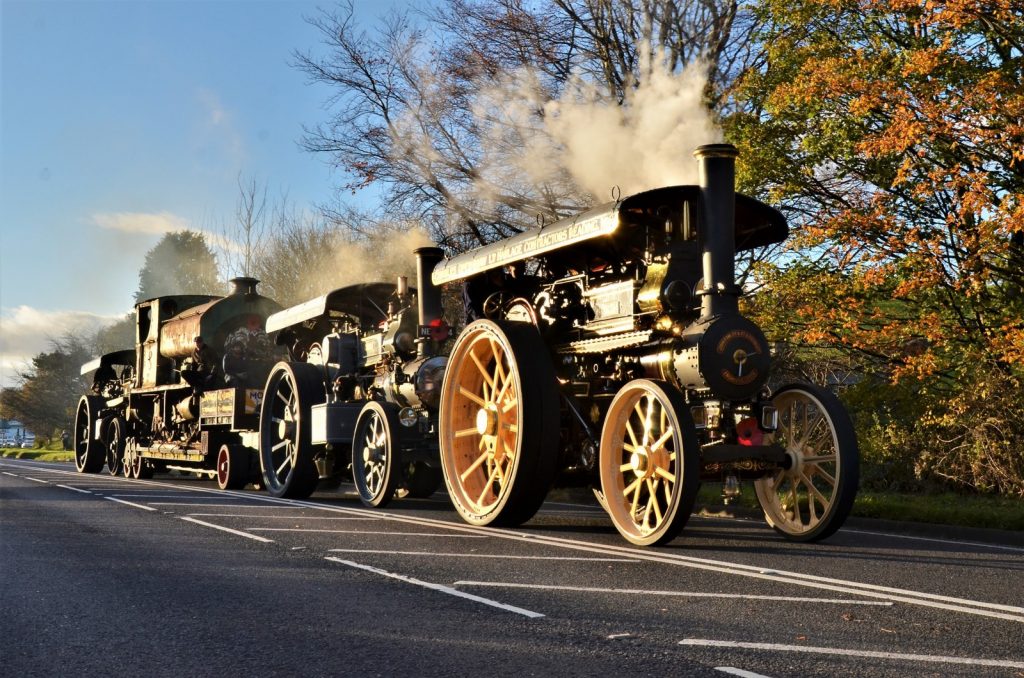 These are just a few of the invited steam exhibits.  On the narrow gauge railway we will welcome back Kerr Stuart 0-4-0ST Peter Pan, celebrating its centenary year and recently overhauled and repainted.

Below: Peter Pan has been restored to the livery of it’s one-time Devon County Council owners, complete with crimson frames and a revised lining style. 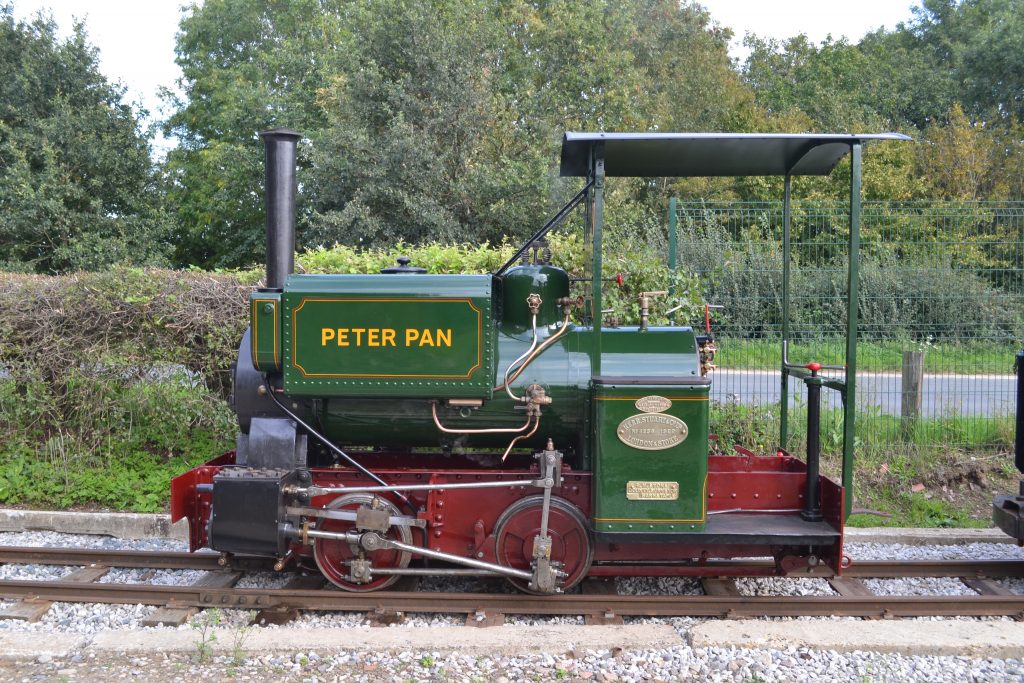 Below: Peter Pan working on the then-temporary narrow gauge railway in the Pit Yard at a previous event. 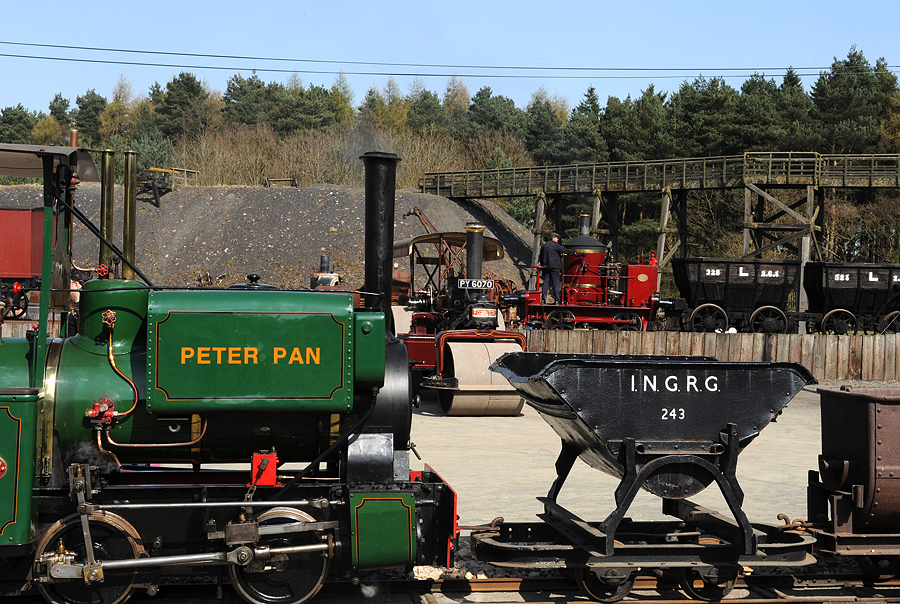 We expect to have around twenty road steam engines and rollers, along with around twenty five internal combustion vehicles at the event.

The Waggonway, Colliery Railway and narrow gauge lines will be in operation, as will the tramway and the wider museum attractions too.  Of note will be the new terrace in the 1950s area, including chip shop, cafe and hairdressers.

We have also reviewed the operating programme for 2022, which has to embrace some marked challenges – not least that we have had several staff leave in recent months, and their replacements could not be trained and qualified in time for the 2022 season – this has most impact at the Waggonway (which will not operate on weekdays for much of the year whist we recruit and train new members of the team) but has also focussed our efforts in terms of the Colliery (standard and narrow gauge operations).  The Colliery will only operate at special events and on Transport Collection Thursdays (with No.18 not being available this year).  As with last year, the opening at Rowley Station will be static, with no trains scheduled to operate at all in 2022.  Thus, the year ahead looks like this:

Dates for the Transport Collection Thursdays. These are planned to continue the sort of operation we did for the coffee pot Fridays in 2021, though with more flexibility on what we run. The idea is these will be an opportunity for visitors to see the transport collections that are less regularly used. They will also compliment the summer of fun activities. Basically the second Thursday of each month, plus the summer holidays.

During 2022 we will change these to be “Transport Collection Thursdays” which will be the second Thursday of each month from April to October. A minimum of one locomotive will operate in the colliery on these days, but with opportunity for other exhibits from the transport collection to operate, such as Rambler, the D4 roller and period motor cycles.