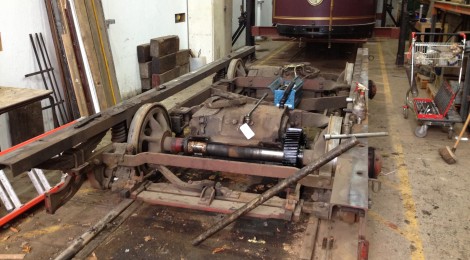 Below: Tony is forging ahead with the Londonderry box chaldron waggon – seen here in stages as it is assembled to near completion. 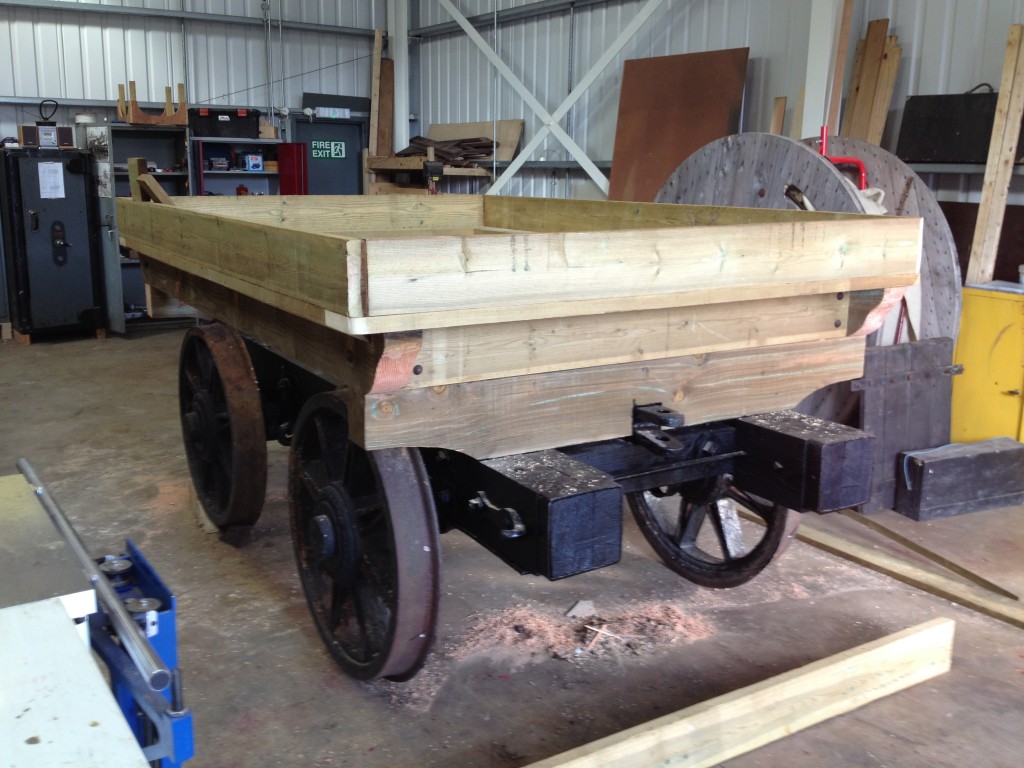 Below: Fitting the interior boards – there were no drawings for this, and only some indistinct photographs to work from.  First the side sections of the hopper were made and the upper planks left off to enable easier access. 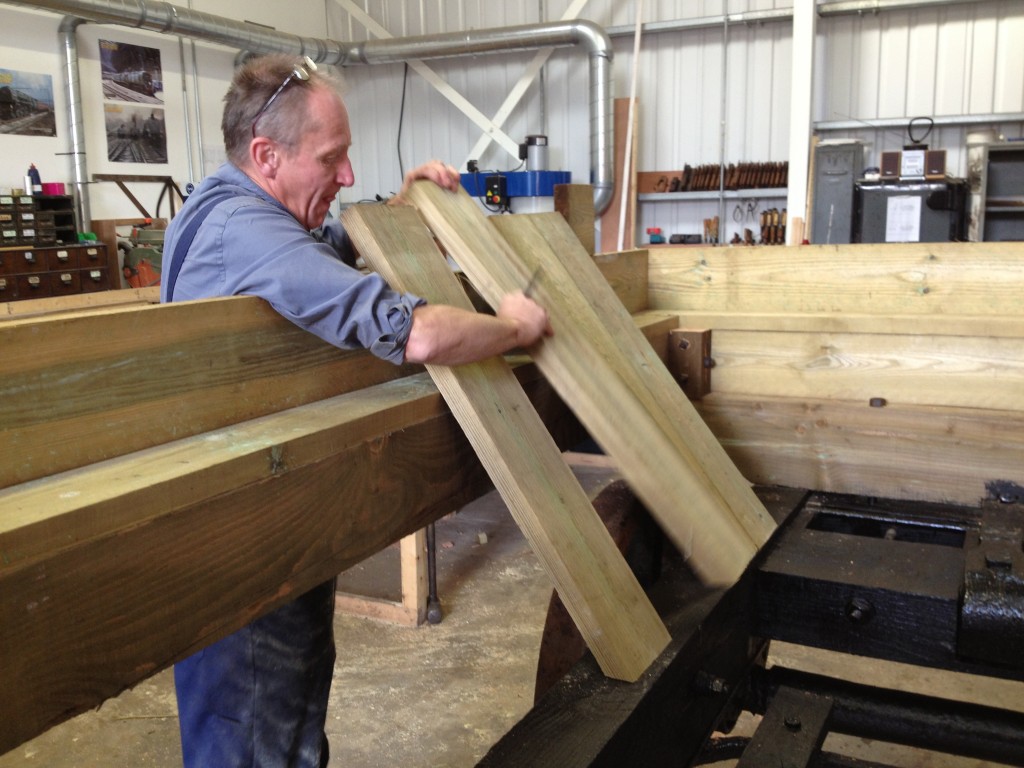 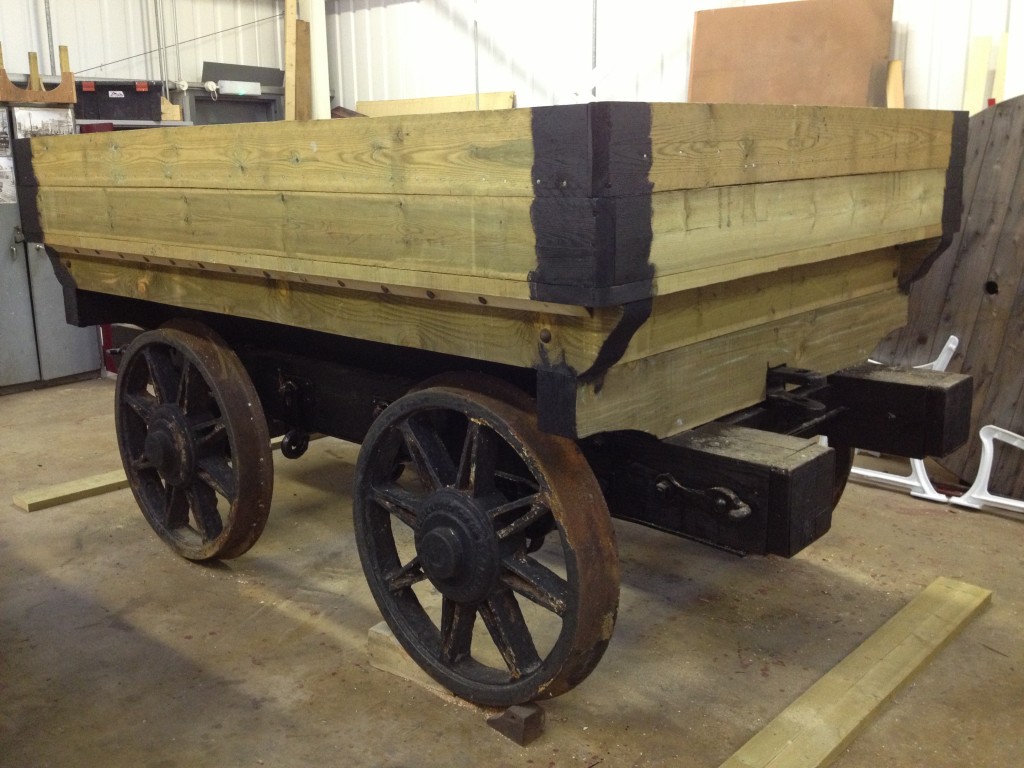 Below:  Tony then added the end planks, quite a complex series of angles and cuts being needed to fit everything together.  This view shows how the interior is fairly traditional hopper or chadlron-like in design.  We are not fitting a door (though the iron frame is in place) – it could be planked later on, but for now aids access to paint the interior and allows a decent breeze to blow through the waggon to dry it out as it will live most of its life outdoors.  The aim is to create three rakes of Londonderry waggons in the Colliery, with four waggons in each train.  We have been working on this for some years and the first waggons treated are now in need of repainting again, so the project is never likely to be completed!  A rake of four ex works looking waggons will be presented at next Aprils Great North Festival of Transport, with four others in reasonable cosmetic condition and four needing repaints (and re-wheeling, as the profiles on some are very poor).  We have enough wheels available to carry this out for 12 waggons, but after this there are no more spares. 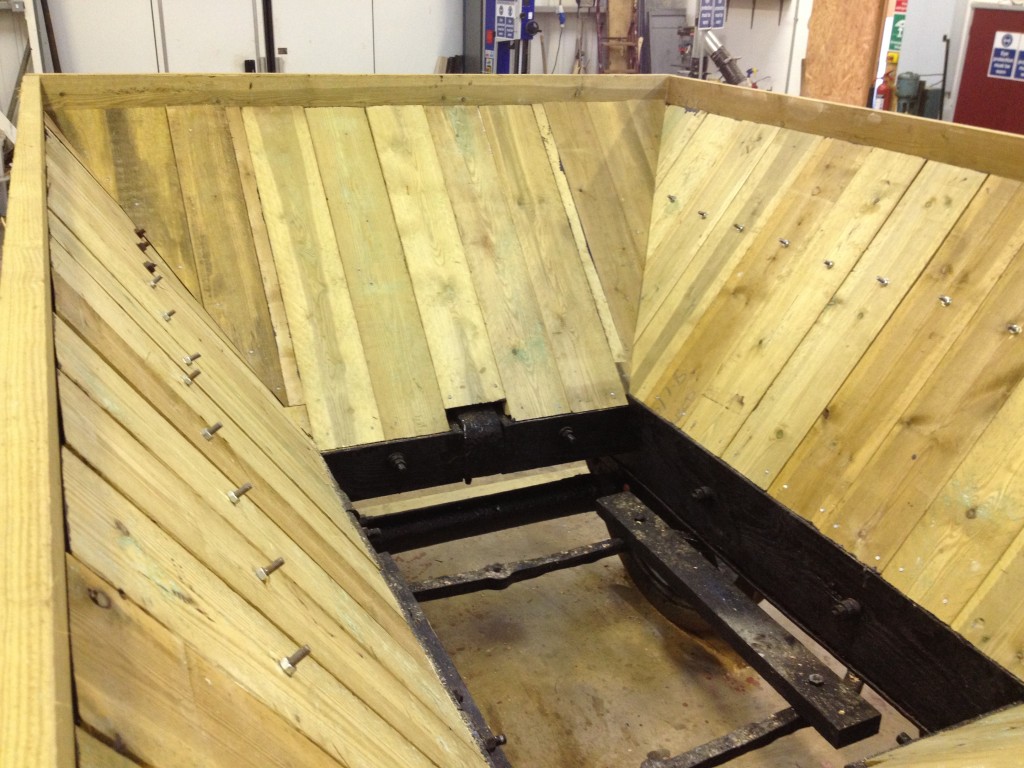 Below: With the interior boards fitted, the ‘greed’ boards that give the sides their full height were made and fitted.  The corners are painted in readiness for fitting of the recovered and refurbished iron corner plates that strengthen these areas. 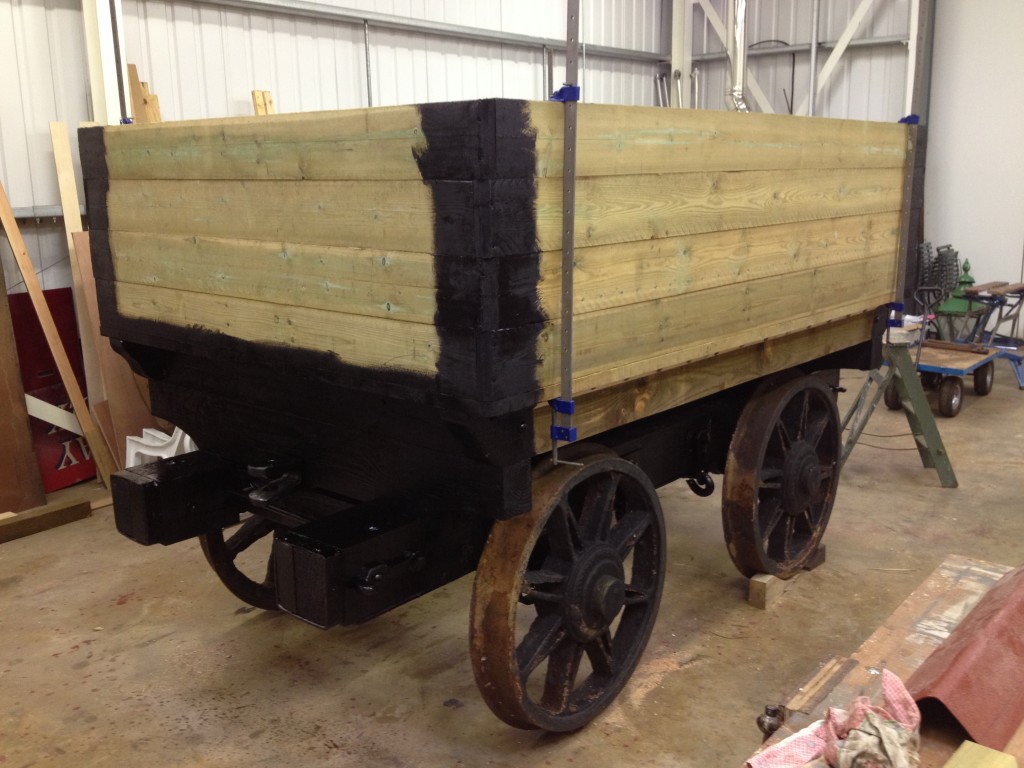 Below: The team working on R025 have continued to make good progress, with the refurbished steering head now fitted.  The axles are being attended to now, to remove excessive wear in the bearing/journal interface. 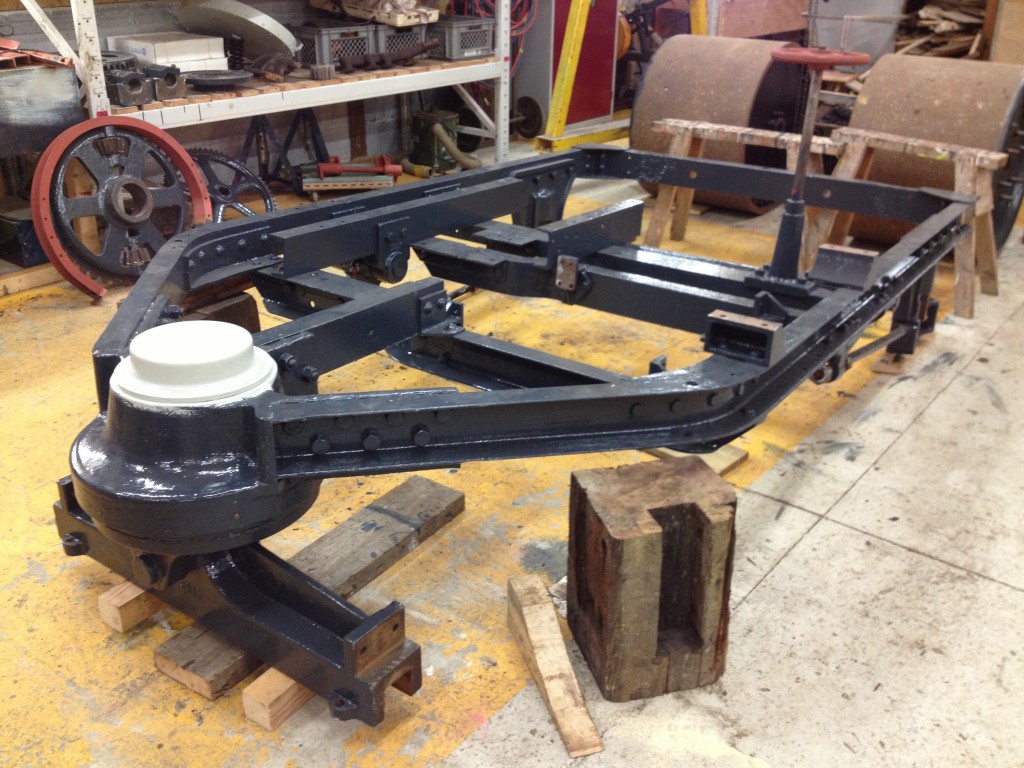 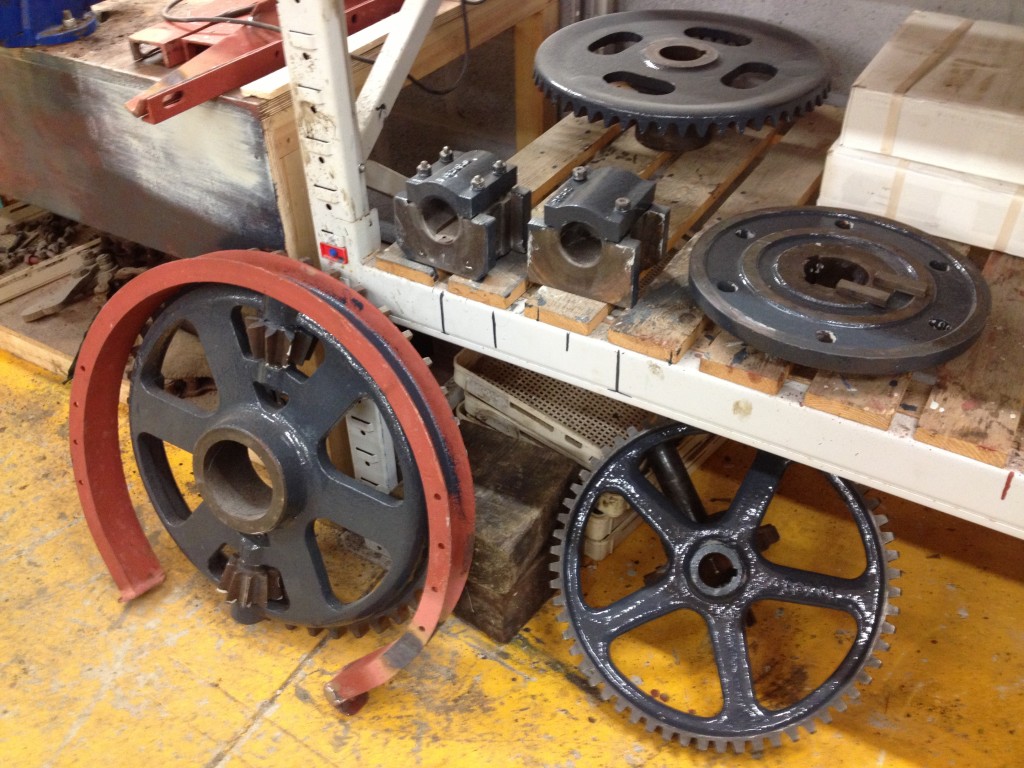 Below: Chris is seen here building up the worn journal on the rear axle, to enable it to be turned to original size.  This is an alternative solution to turning it down and fitting a bush, and was favoured due the presence of the differential at this end of the axle and the need to bore the large rear rolls.  The weld is added in spiral, to counteract any distortion if it were applied in strips.  There is quite a distance of weld to add – one rod adding about three inches to the spiral, thus far the work having taken a couple of days to complete (in between other things). 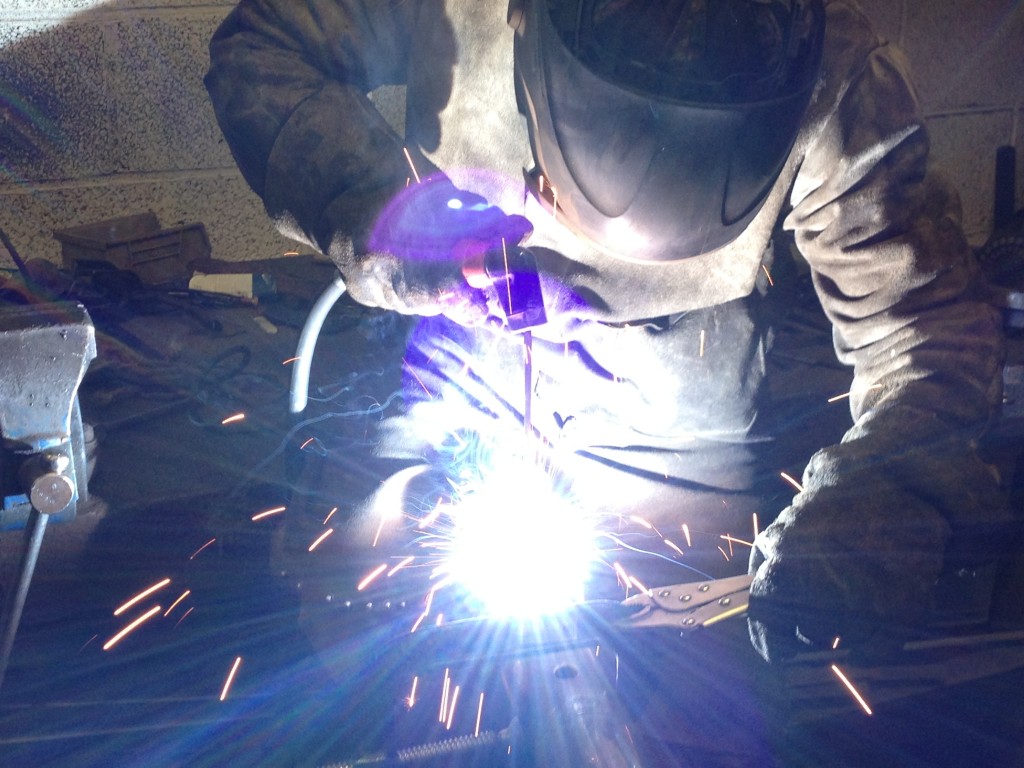 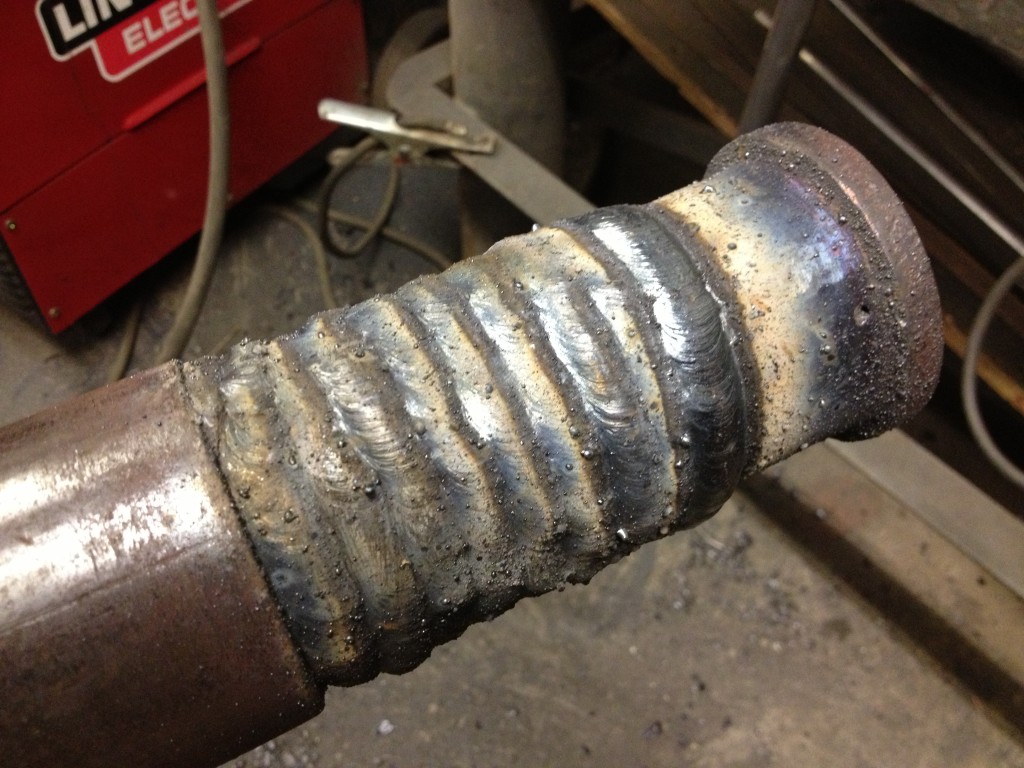 Below: Terry has been painting the fencing made by the Friends team, this being to bolster both the Friends display fencing (used at events) and also the Fairground fencing – to replace the temporary arrangements that we have had in place. 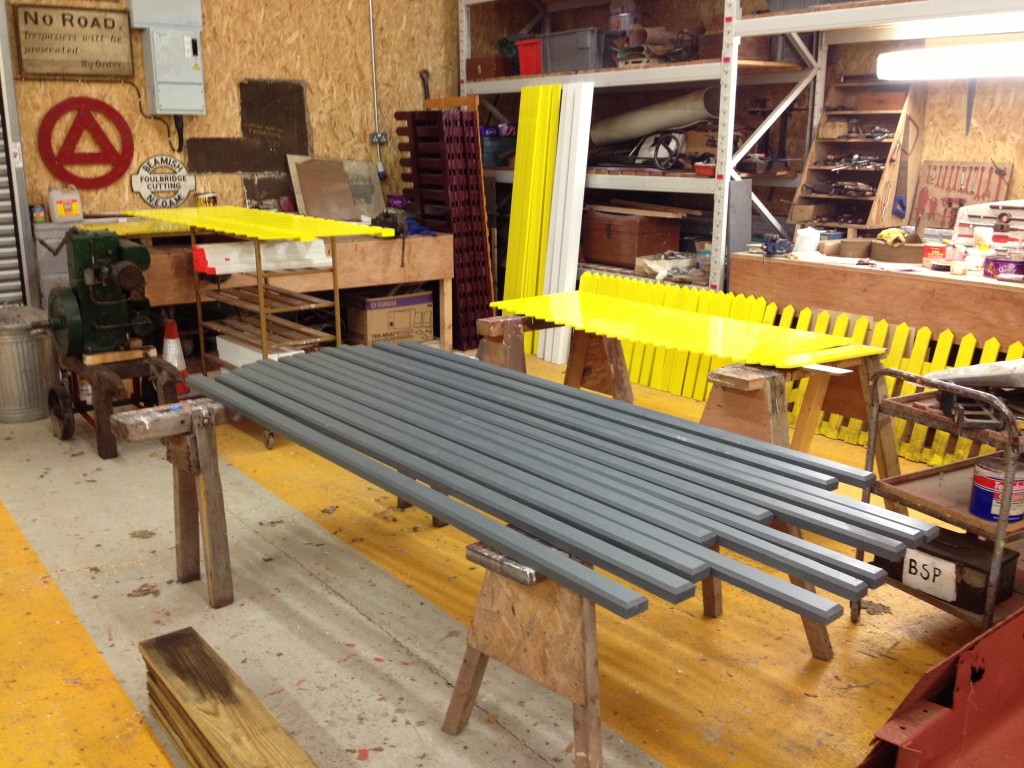 Below: Yesterday Sunderland 16 was lifted from its truck.  Gateshead 10 has re-entered service with its refurbished motor and so enabled Brian and Tom to concentrate on preparing 16 for the lift.  The truck was then rolled clear and work started on removing the motors to enable the wheelsets to be liberated.  These are going to Blackpool Transport Services for re-tyring, hopefully being delivered there next week. 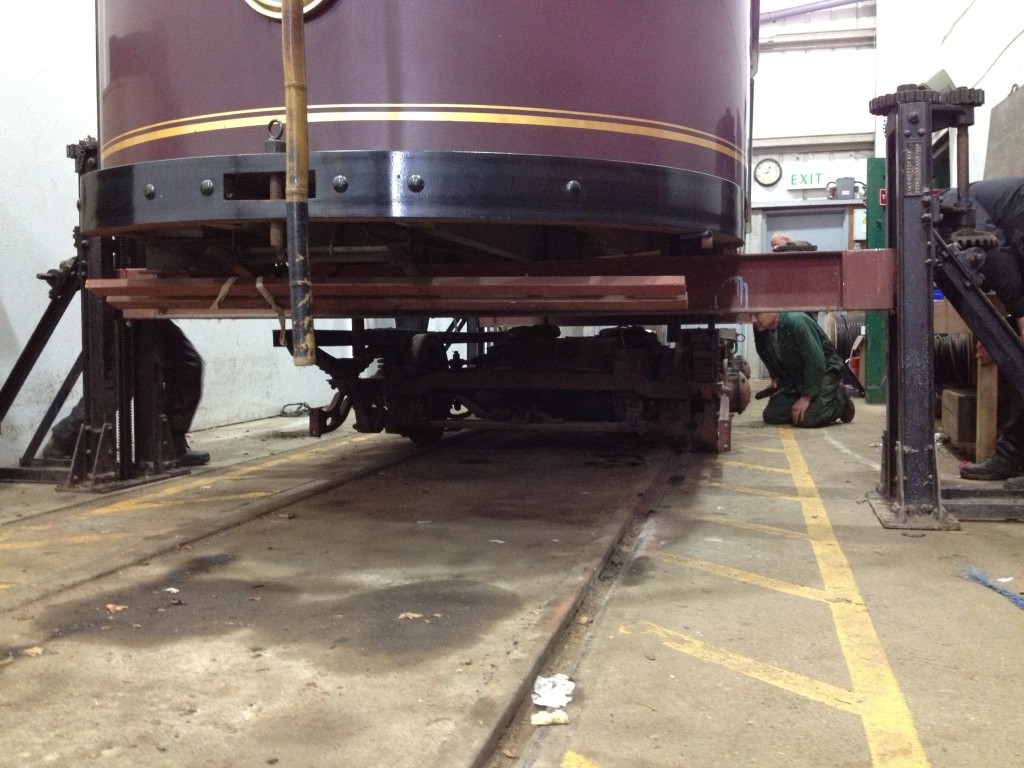 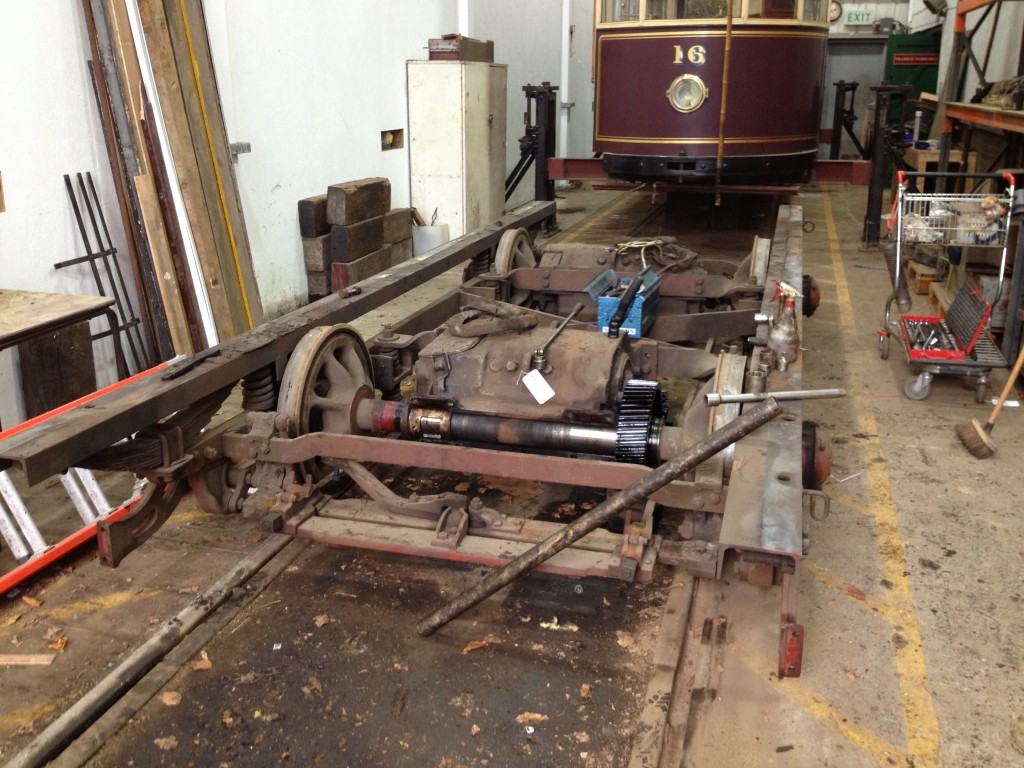 Below: Unfortunately we do not possess a set of powered lifting jacks, so keep a set of mechanical ones in ticket.  These are seen here being used in bursts of ten turns, to lift 16’s body clear of the truck.  Note that one of them is somewhat sticky making Ian’s life turning the handle much harder than for the other three!