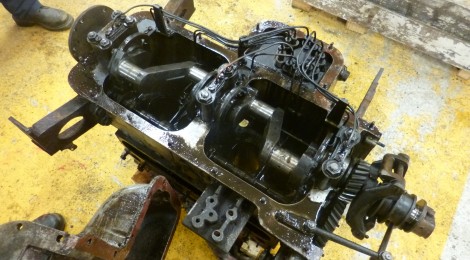 The team restoring the Barford & Perkins 1925 ex RAF Motor Roller have passed a milestone, with the work on the rolling chassis now all but completed and the roller standing, painted, on all four rolls with the final drive chain also in place.  The team (led by Chris and John, both members of the Friends of Beamish and regular Saturday volunteers) are making superb progress and are now working on the overhaul of the Albion petrol engine.  Beamish staff have a number of jobs to contribute, including welding and repairs to the rear footplate and work to fix the snapped steering column casting.  This will be carried out in between other jobs.  Meanwhile, the radiator, which requires extensive work, will be sent to a specialist contractor.  Bill Dickins from the Road Roller Association has arranged for relevant drawings from the Barford & Perkins archive at Lincoln to be scanned and sent to us, which will particularly assist with the replication of the seat and canopy.

Below: An overall view of R025, showing front rolls painted since we last saw it on the blog.  The chain sweep for steering is also fitted and painted. 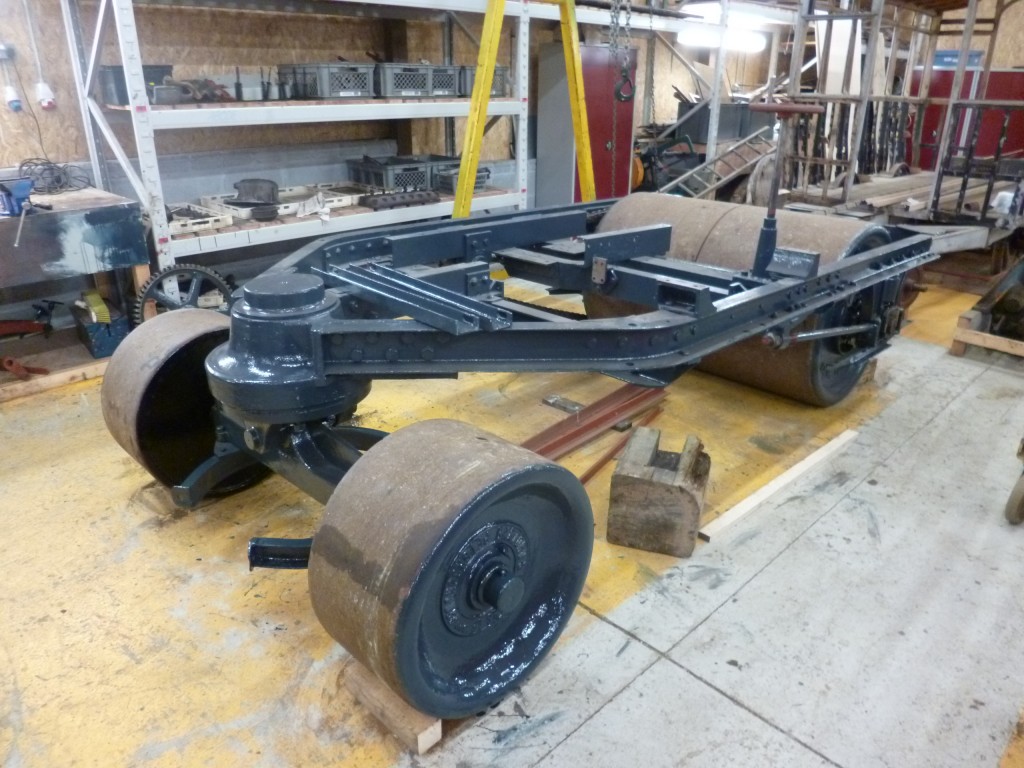 Below: Two views of the drive chain, running from the output shaft (connected to the gearbox) to the rear axle and differential.  The chain itself is new (and really quite expensive!), likewise the gear on the output shaft.  However, new components should ensure durability and reliability, the original being beyond economic salvation for the project. 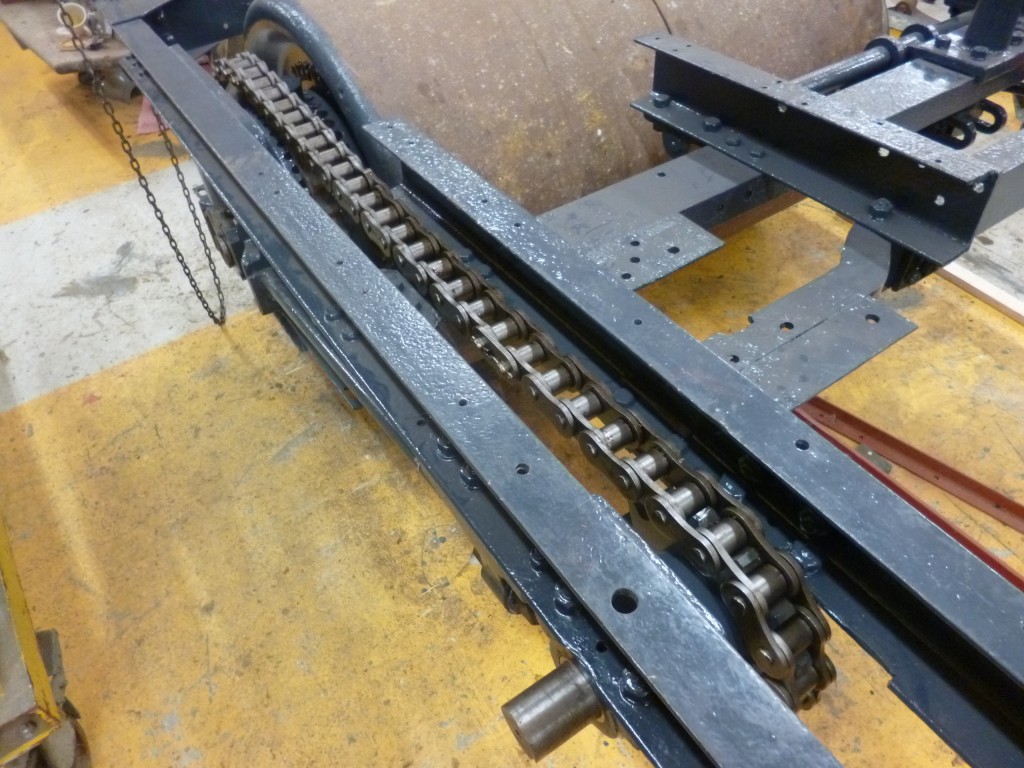 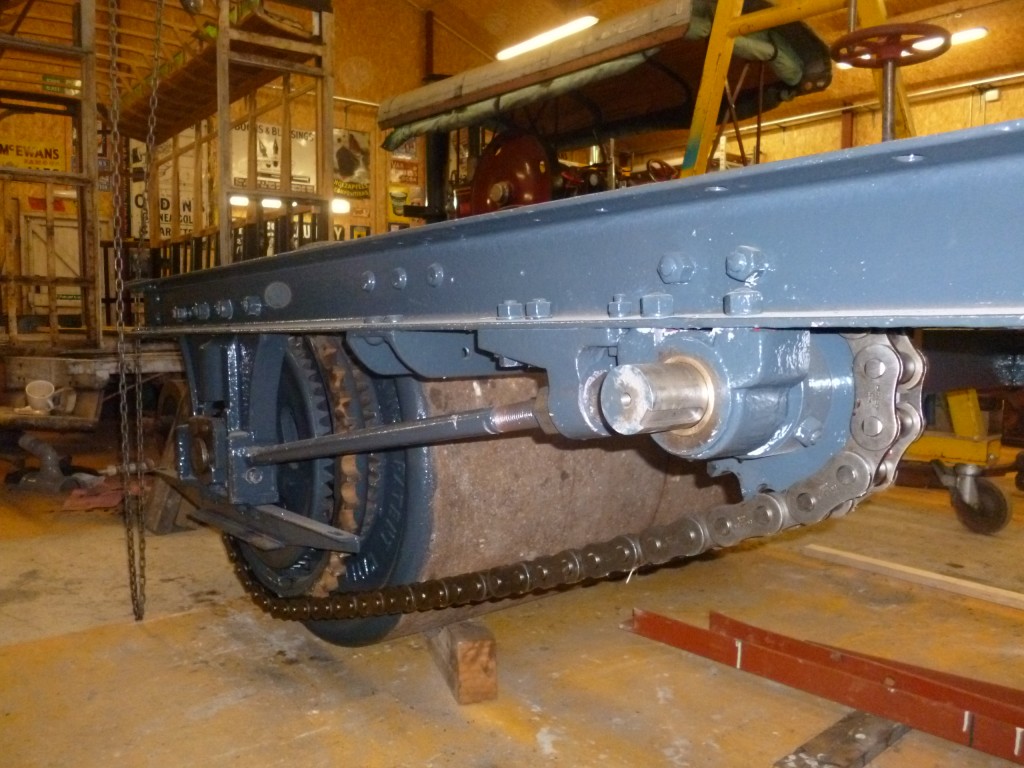 Below: With a rolling chassis attained, the team have turned their attention to the engine, seen here as dismantling work started, with the head removed and the block standing on the wooden stand made for it. 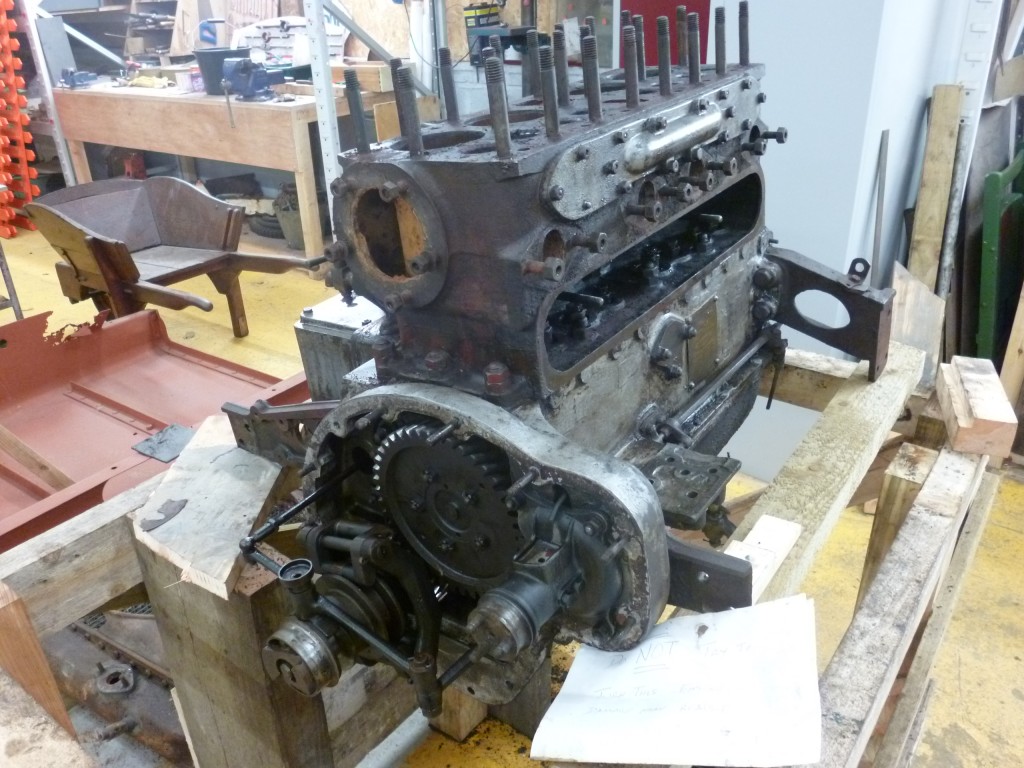 Below: Today, the team removed the pistons and connecting rods, inverting the engine to remove the sump.  This view shows two of the big end journals on the crankshaft.  Note the pipes, taking oil from the pump to the various bearings around the engine.  The crankshaft has received attention before, with one journal being undersize.  Chris has also determined that the pistons are probably new, the engine having been re-bored at some point, and would appear to have done very little work since then. 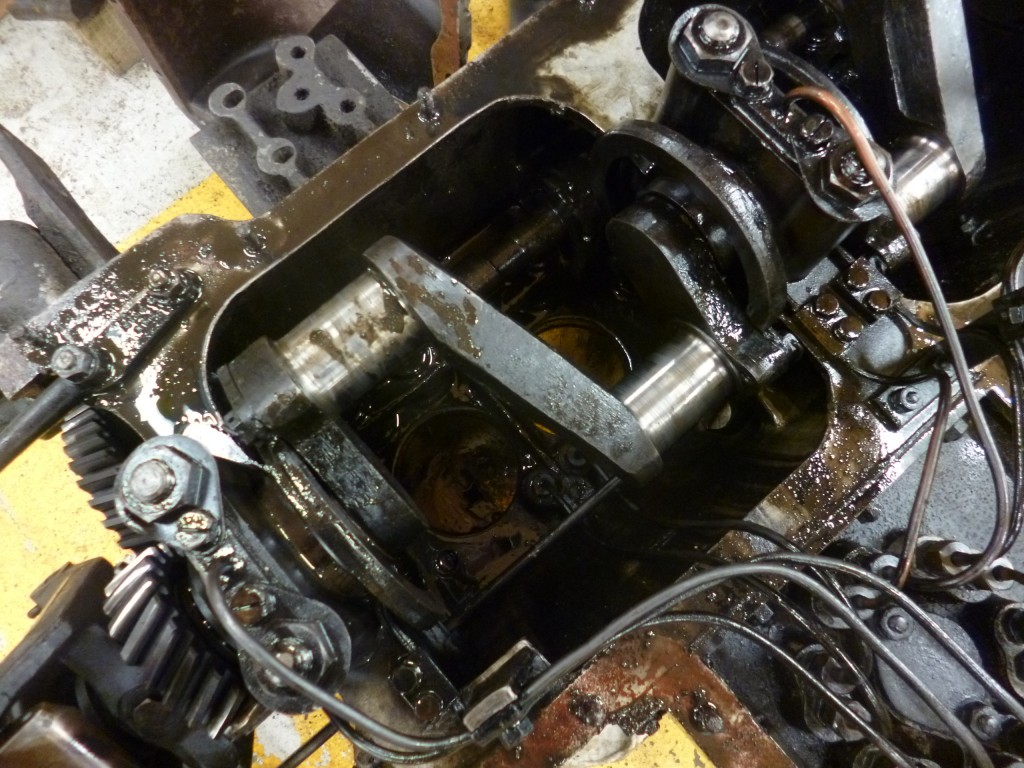 Below: The governor end of the engine, showing the governor itself (the levers and cranks) as well as the gearing for the camshaft and magneto (left). 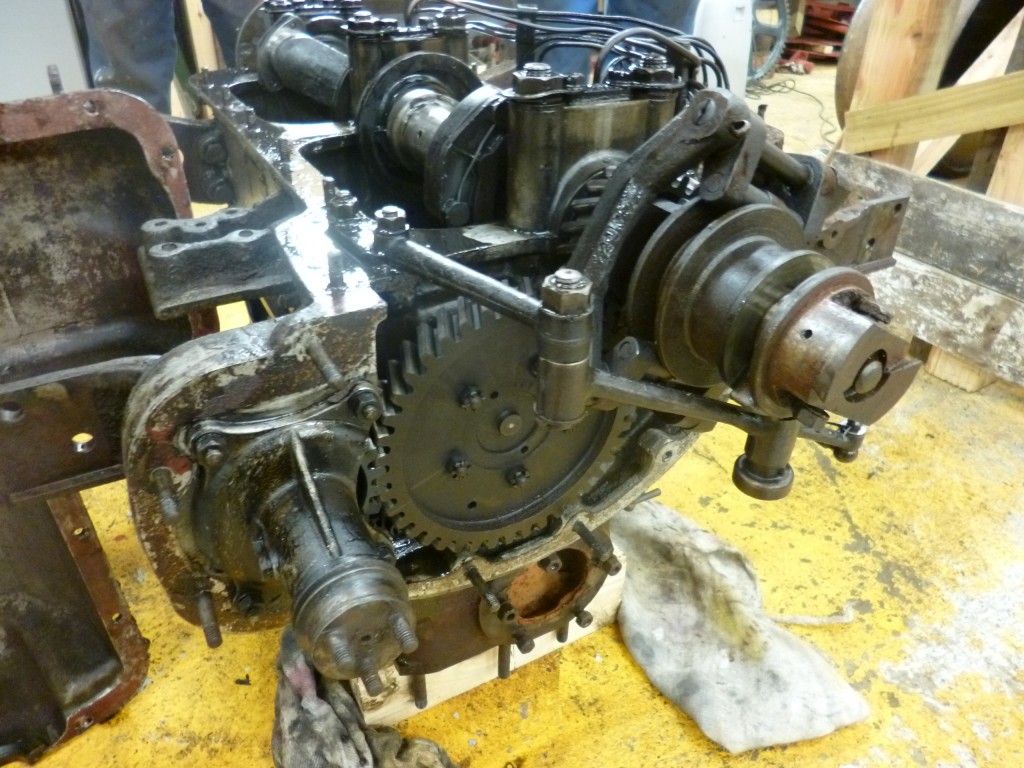 Below: A good idea of the mass of the engine can be gained from this view – the equivalent size today would be in quite a substantially sized vehicle! So far the work required appears to be manageable and no horrors have revealed themselves (yet!).  The crankshaft will need re-grinding and it may be worth making all of the journals a consistent size.  One is already undersize and another is worn so this work will be prudent to give us a reliable engine that will last. 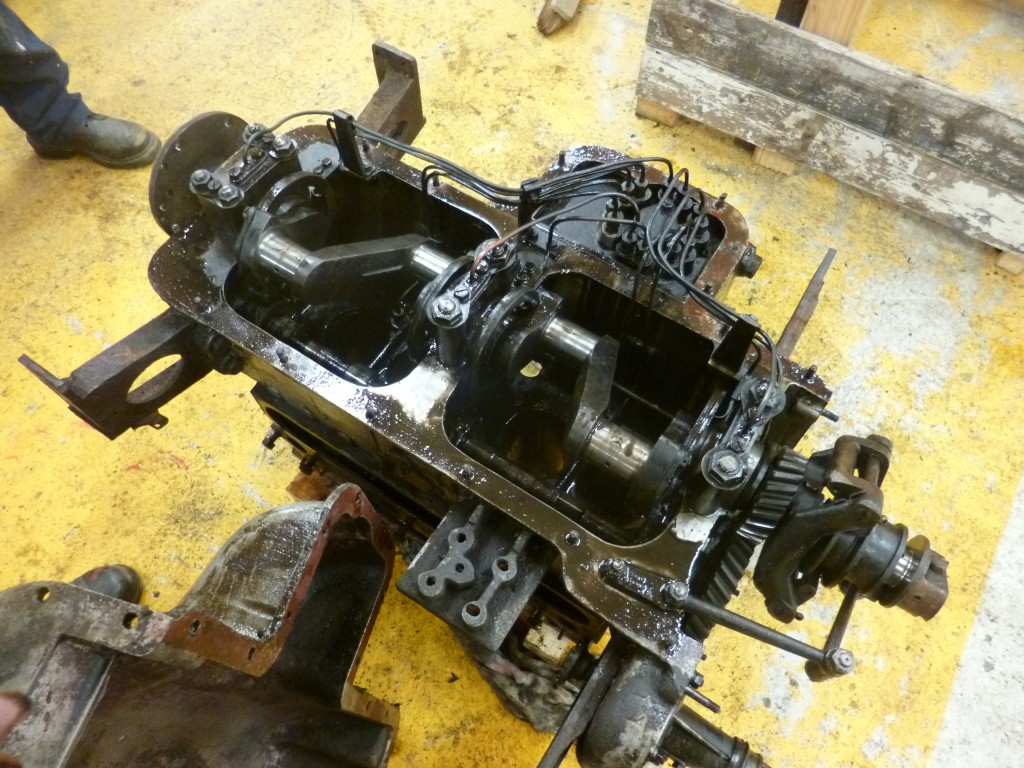 Below: One of the big end shell bearings has ‘run’ – see here.  Oil starvation being the cause, corresponding damage can be observed on the big end journal. 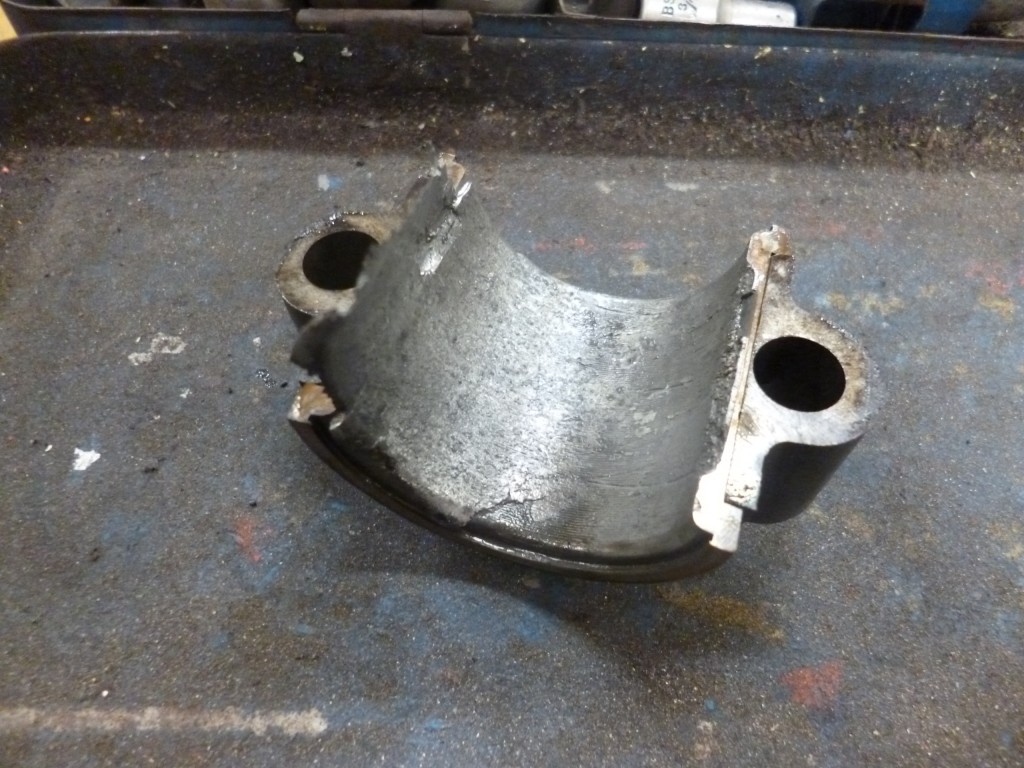 Below: Pistons, connecting rods, big ends and shells are all visible here, awaiting cleaning and inspection. 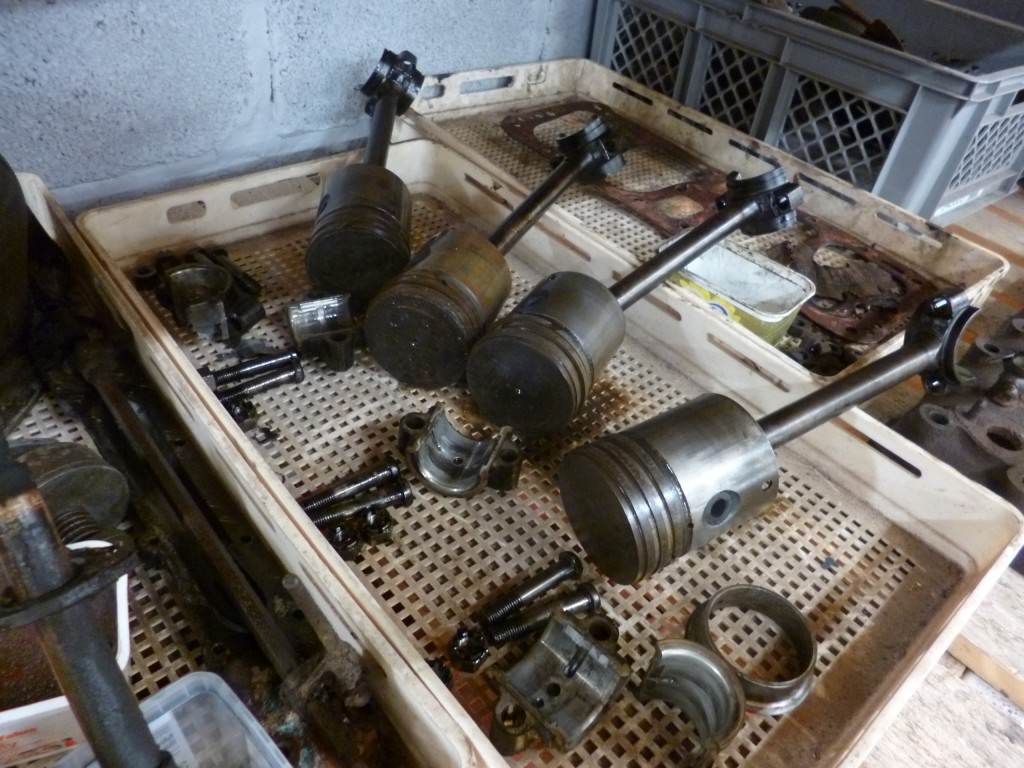 Below: The upturned engine with alloy sump in place.  The brass drain cock is an interesting feature and suggestive, it seems, that the engine is essentially a dry-sump type, with a total-loss system for lubrication being employed.  In practice, the pump (replenished daily by the operator) delivers oil to the engine’s moving parts, the oil then finding its way to the sump.  With no means of extraction or filtering, the oil has to be drained, via the tap.  The presence of a tap, rather than plug, would seem to bear this out too.  We are waiting on a manual for this engine at present.  Such procedure would seem to be labour intensive, but is still far easier than the preparation of a steam engine, and so such things as priming a petrol engine on each cylinder and recycling the oil manually is not really too onerous if viewed in context with the era the roller operated – though in this day and age it would no doubt cause major worries for all car owners and drivers! 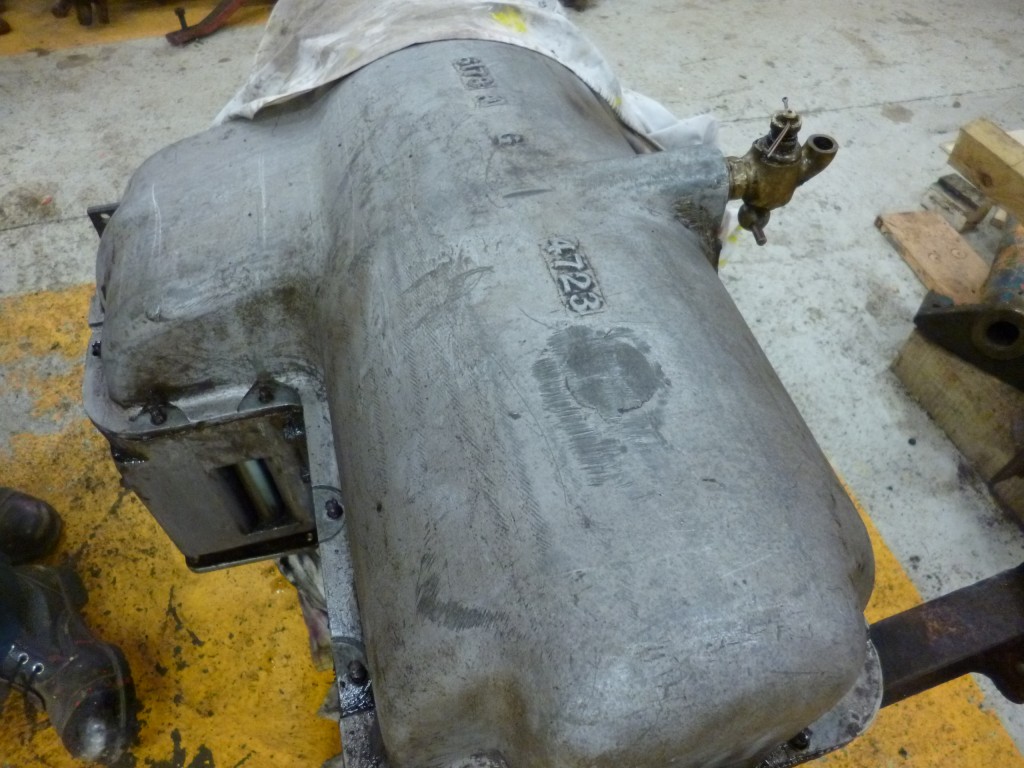 Below: There are a number of new catalogues in the trade catalogue section on this site.  All are from my own collection, but I felt they add to the theme rather nicely and will hopefully be of interest to others.  Incidentally, I am very keen to find any Barford & Perkins catalogues (and Aveling Barford motor roller material too) to add to this site – either by loan or purchase.  The selection here is growing but the earlier material is less well covered.  I have several new catalogues to add (once I find a moment to scan them!), including Marshall, Aveling and Wallis & Steevens material.  The catalogue illustrated below is for the B&P Q series (Quick Reverse) – the only B&P catalogue that I have at the moment.

Below: A later but still very interesting catalogue can be found for Aveling Barford titled ‘What We Make’.  All the catalogues can be viewed as pdfs under the appropriate heading from the menu on this site (Downloads/Trade Catalogues).