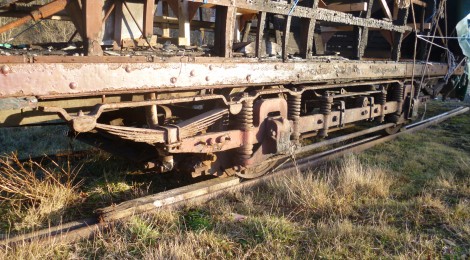 Over 50 years ago a small four wheel tramcar departed the area in which it had worked its entire life, for a new future as part of the National Tramway Museum collection.  It had spent some time in an allotment in Gateshead where its former driver had ensured its survival.  Now, more years on from its withdrawal than it ever spent working for its original tramway, No.52 (originally numbered ‘7’) has returned to the north east.  The Tramway Museum Society passed a special resolution to enable 52’s transfer to Beamish and yesterday, at dawn, it arrived.  It is well known that the tram was badly damaged in an arson attack on the NTM storage facility at Clay Cross in 1999, but this doesn’t put us off and 52’s restoration will be one of the more challenging projects that has been faced here. 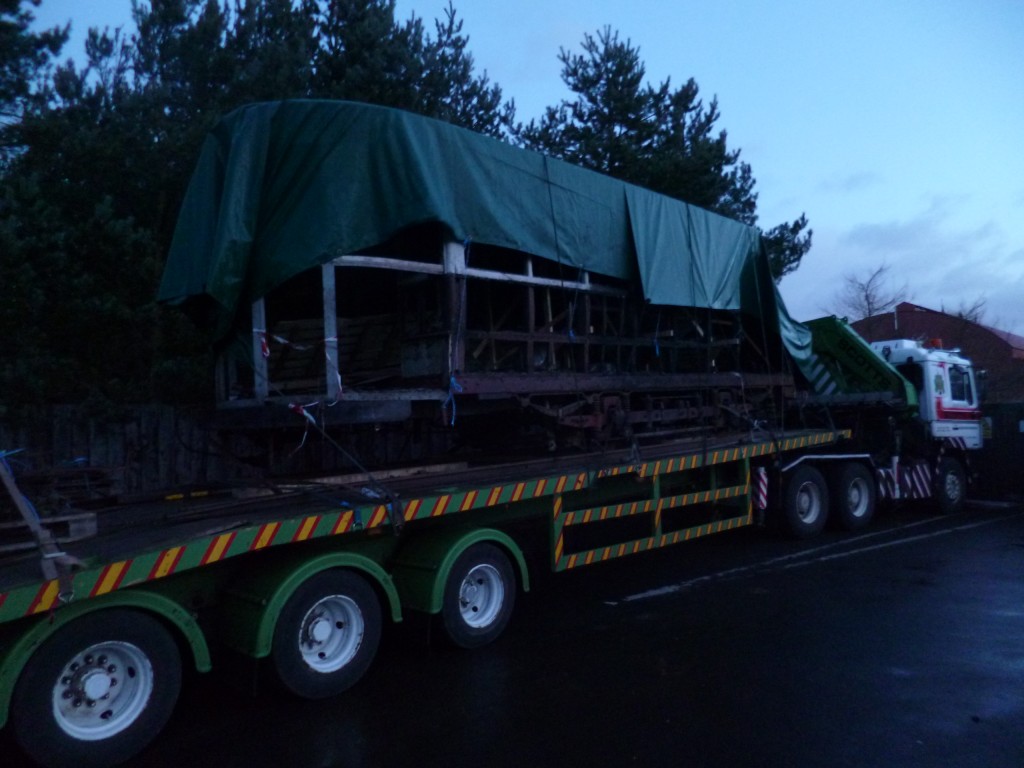 Below: 52 is temporarily stored at the rear of the Town, pending removal to the tram depot in the spring, when a number of tramcar moves will enable it to join the rest of the collection. 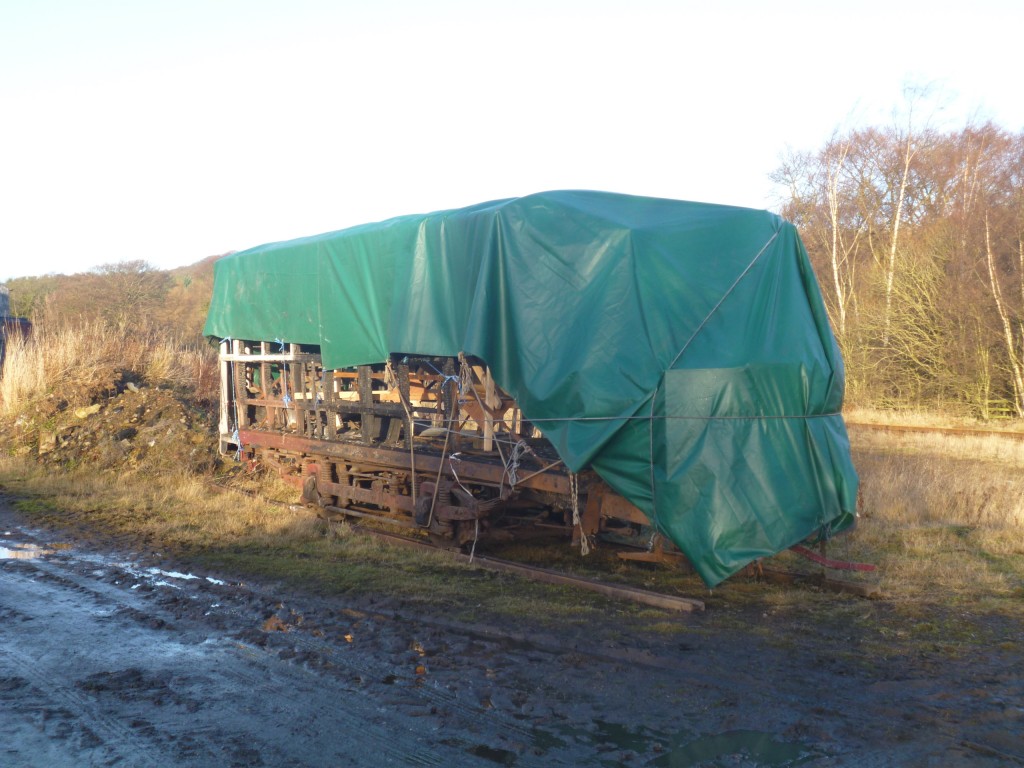 Below: This view shows the worst side, and the better end.  The damage was primarily top down, the roof being entirely lost though charred remains exist as a pattern.  The truck has survived in quite good external condition (though all fittings will require complete reconstruction) and hopefully the ‘tempering’ of the fire may actually have helped relieve any stress within it – assuming that the fire brigade did not dowse it directly with cold water when extinguishing the fire at Clay Cross. 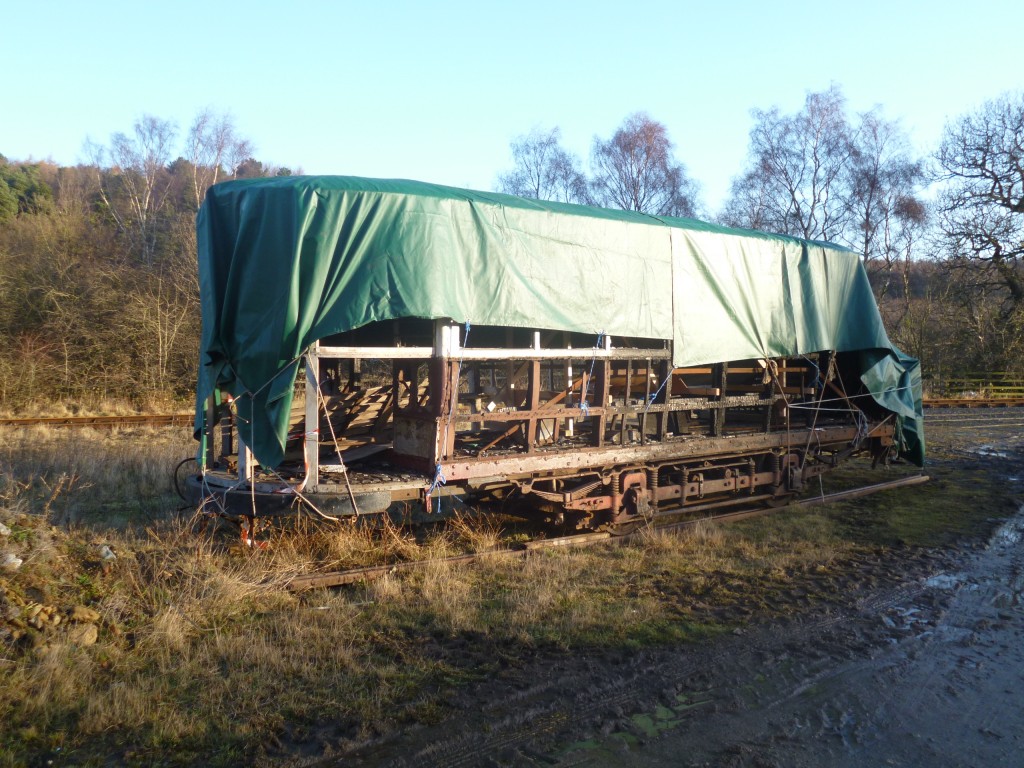 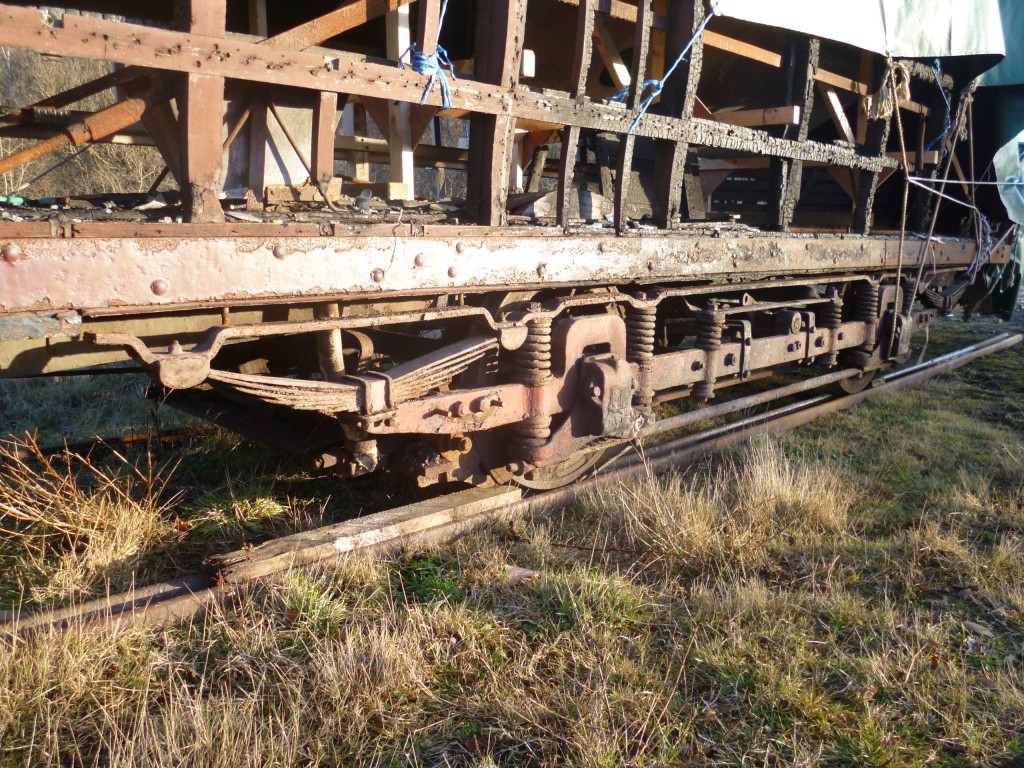 Below: A view towards the worse end, though retaining the dash panel. 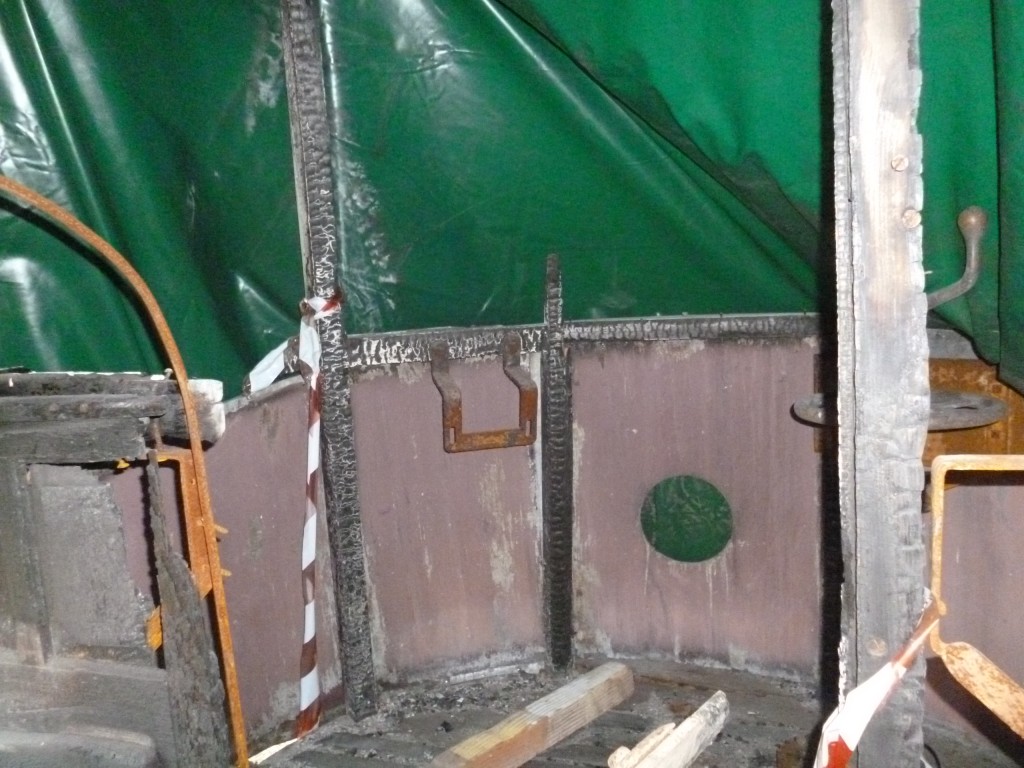 Below: This view of the other side shows the lower framing to be in better condition with no noticeable charring evident.  The platform canopy and vestibules have been entirely destroyed however.  We do at least have one end and one side to copy and even re-use in part. 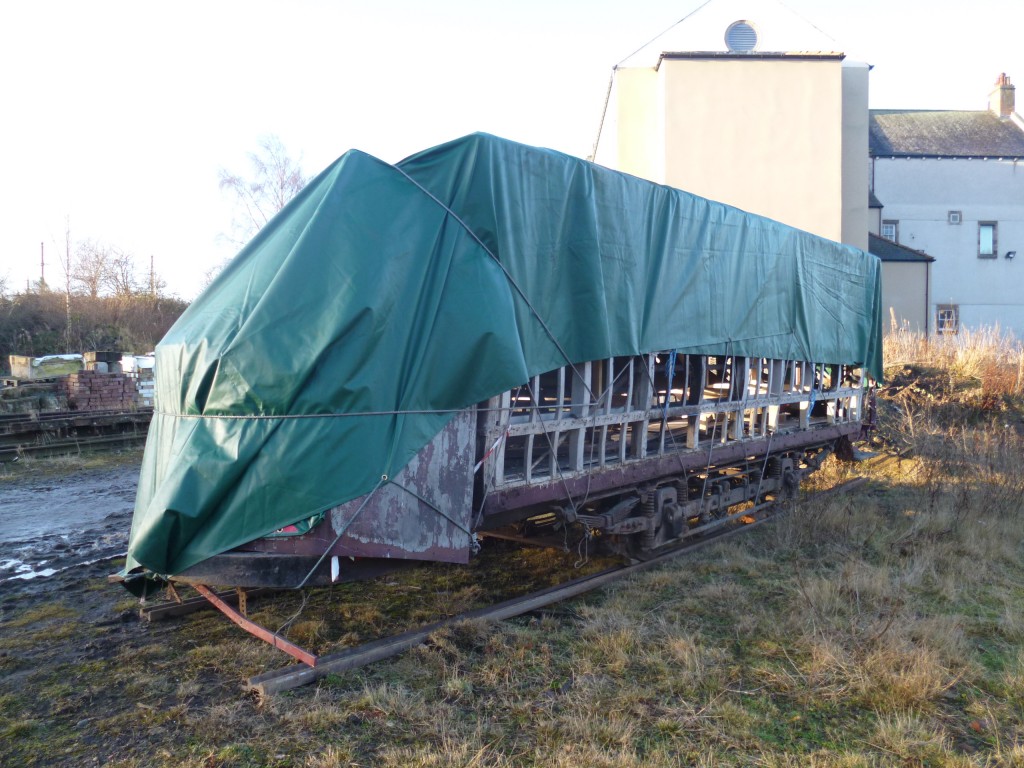 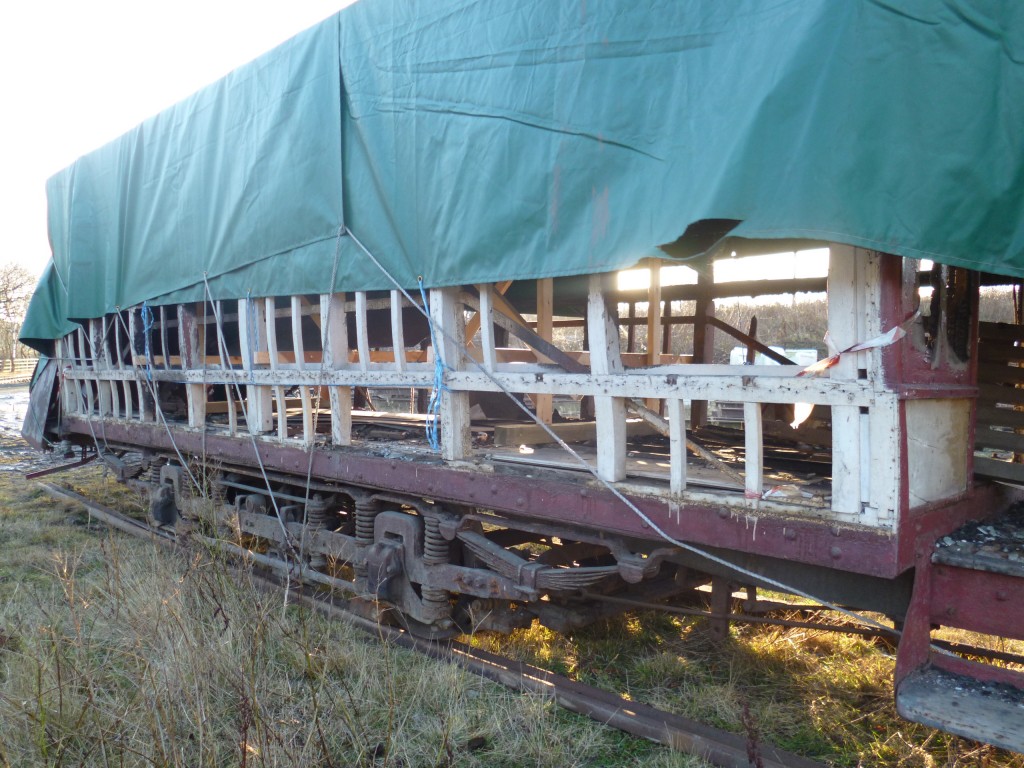 John Henderson was involved in the preservation of No.52, and other north east trams, and has sent through some corrections and further observations per the previous posting on the subject I made before Christmas.  Here are his notes, which I will incorporate into a revised posting, probably in an article format, to place on the blog in due course.

Gateshead 52; originally number 7, was amongst one of the originally electric tramcars used by Gateshead & District Tramways to replace the Steam Trams. Built in 1901 by the Electric Railway & Tramway Carriage Works in Preston, it was one of a batch of 4 wheeled, two side windowed, clerestory roofed “California” style single decked tramcars used initially exclusively on the Bensham route. About two years later, the open ends compartments became enclosed. It was not one of the 4 trams in the batch, rebuilt to Pay-as-you-enter in 1912 .Number 7 sadly was involved in a runaway accident on Bensham Bank on Saturday 5th February 1916. The incident developed when 7 was waiting at the last   loop on Saltwell Road for the  tram journeying towards Bensham. When it did not arrive, the young Motorman drove onto Bensham Road; a steep upward bank travelling to the next loop outside the Ravensworth Hotel.  It is alleged an incident transpired on the other tram seen by its lights in the distance, so number 7’s Motorman left his tram and went uphill to assist. Further passengers boarded 7 and the brakes failed to hold the tram. It travelled gathering speed back down Bensham Bank and came off the tracks at the curve at the hill bottom and overturned. 4 pedestrians were killed and 9 passengers and the conductress were injured.

The tram was removed back to Sunderland Road Depot, and subsequently in 1920 was used as the basis of a new tram constructed in their own work shops.  Very little of the original tram was retained apart from the underframe, controllers, motors and the Brill 6 foot truck. The 4 windowed California style tram was now an unvestibuled eight window vehicle with window quarter lights and a shallow domed roof. The saloon was equally divided into two with a centre bulkhead. The saloons were to divide smokers from non smokers. The beautiful roof was not hidden by advert boards until the mid thirties and kept its fleet number 7. Advert boards were added in 1936 and in 1938 it was renumbered 52. In 1937, the 6 foot Brill truck was replaced by one of 8 foot wheelbase, so briefly operated as 7 with this running unit. Just before the war, it received a semi vestibule forming windscreens; with an open side.

During the war, 52 gave continuous service, still sporting its 1938 fully lined out livery, but with white bumpers and headlight masks. After the war, it continued in service looking increasingly shabby In 1950, it received a very basic repaint completely unlined. In this condition 52 continued to serve mainly the Teams route, but still occasionally would supplement cars on the Dunston and Bensham routes. It was only when serving these two latter routes, did 52 go beyond its normal Gateshead Station terminus, travelling over the High Level Bridge to Newcastle Central Station.

When the tramway was closed in 1951, it was the end of one chapter, and the start of quite an interesting existence. William Southern had worked for the Gateshead system for many years; latterly a Motorman, and 52 was his regular charge, and very close to his heart 52 was bought by William complete with its truck, along with a balcony top deck and the Brill 21-E swing link six foot truck from under 45A. All were moved to his garden where in William’s later years he was able to cherish his past employment. When William passed away, his family presented the tramcar to the TMS. Through the efforts of George Hearse, the tram was an early arrival at Crich, but spent a significant time stored outside. Its condition became very poor, and was robbed of many parts including its motors.

In 1963, a small group of dedicated northeast enthusiasts got together to form the “Gateshead 52 Group”, with the sole intention of restoring the tram to operational condition. It was agreed that the tram would be restored to mid thirties condition, being unvestibuled, with roof boards and with the fleet number 52. A start was made including stripping the roof in order to completely recanvass this body section. Rotten exterior metal panelling was removed and initially timbers were protected in order for any future replacements to have good patterns. All interior fittings, mirrors, sanding gear, destination boxes, brass work, seating, glass advert panels, controllers, resistance box, trolley and base were removed, and stored carefully at the newly acquired Clay Cross store.

The tram was renumbered from 7 to 52 in 1938 not 1928. As mentioned above, only the underframe, controllers, resistance box and its 6 foot Brill truck were incorporated in the rebuilt car as 7 in 1920. It is also rumoured as 7, the tram, for a period, had one of the two swing link truck fitted, but this cannot be confirmed. The view of 52 in Sunderland Road depot [included in the blog posting] was taken in 1938 along with another couple of photographs showing more of a side shot. Maurice O’Connor was present of the day these photographs were taken by other enthusiasts. He had quite an interest in the north east tramways and talked to me fondly about Gateshead, the bogie cars, and the Teams trams. Whilst working on 52 at Crich, Maurice mentioned that over a number of visits he saw thee changes to 52 and during the war saw 45 and 51 (your specific tram). As an unvestibuled 52, the car initially had its 6 foot truck but quickly this was changed for the 8 foot truck. It is not believed the tram entered the war in unvestibuled condition, and entered the war having been fully repainted; the last time fully lined out

The Beamish Gateshead 51: Your tram cannot be substantiated as to what date it was created, however I believe by its condition upon entry to the war, I suspect it was created in the late twenties or early thirties. It was a completely fabricated vehicle using I suspect a raft of discarded or stock items. Your theory about the origins of the clerestory roof are interesting but the most important fact is what you acquired was one end of the tram. The six window part of the tram was the “Smoking saloon”; the two windowed “Non Smoking saloon” must have been chopped off at the intermediate bulkhead. What the acquired was the larger part of the strange unequal two compartment vehicle. Your photographs showing the interior confirms many similarities to 52 and Milnes bogie car roof fittings/cappings. The panelling added inside clearly are recovered advert boards showing the NUMOL advert, but I suspect these were fitted once it became a garden shed. I very much doubt your 51 was made around 1918 and I believe it never carried any other fleet number. Your tram was not rebuilt from number 45.

The short single decked 6 windowed tram with quarter lights is almost definitely the tram created from open topped tram 45; no evidence or recollections can substantiate that a second car was created from open topped tram number 25. The dimensions of open topped car were the same as the single decked 45 (possibly numbered 51 at some point in time!). The unusual feature in the rebuild was the creation of new bulkheads with offset sliding doors nearer the entrance step. As 45, the single decker also spent time as a temporary works car, as born out by photographs, but not 51A; this was a purpose built works car. I am sure and totally convinced the short 51, the passenger single decked car 45 and the Works car 45A are all the same vehicle. This also adds weight to the argument that your 51 was constructed later than 1918 and likely to have occurred in the early thirties.

What is clear there has been no photographic evidence to support there was a second short car rebuilt from open topper 25.

George Hearse and Maurice O’Connor both recollected the  checked use of car 45 as a passenger and a works car, and 52 somehow became the most mentioned car of this strange small capacity group. They both mentioned that Sunderland Road depot had amassed a huge store of second hand wood, steel, mechanical & electrical  equipment removed from various trams. This suggests creating your 51 would have been perfectly feasible in the thirties; in the same way as 7 incorporated many features of the quarter light bogie cars no doubt available around 1920.

John also sent through some further images of 52, including these views of it arriving at, and receiving preliminary work at Crich in 1960. 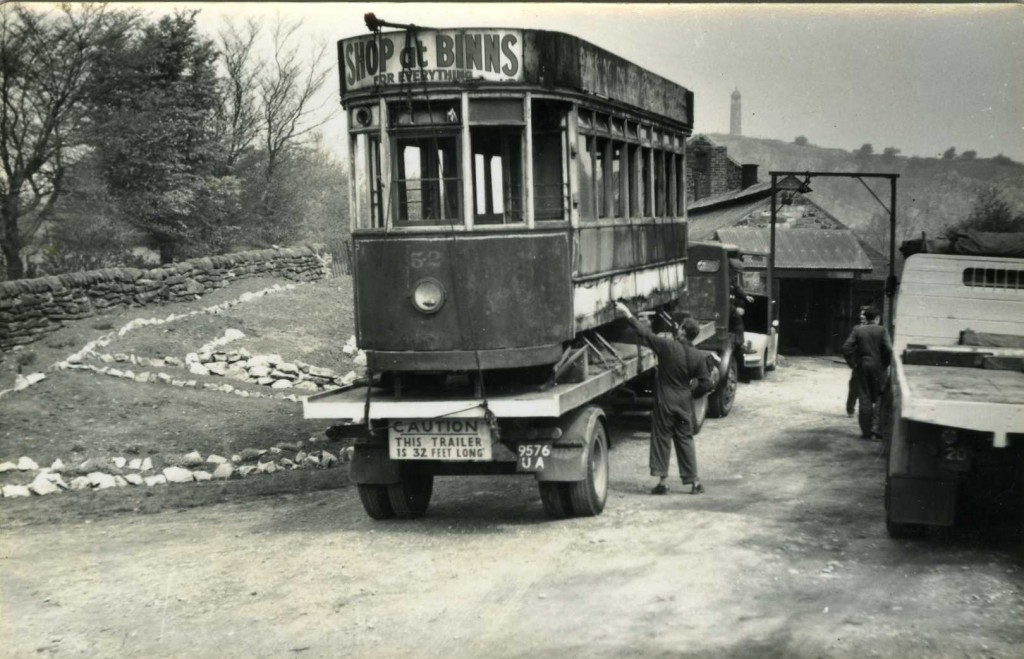 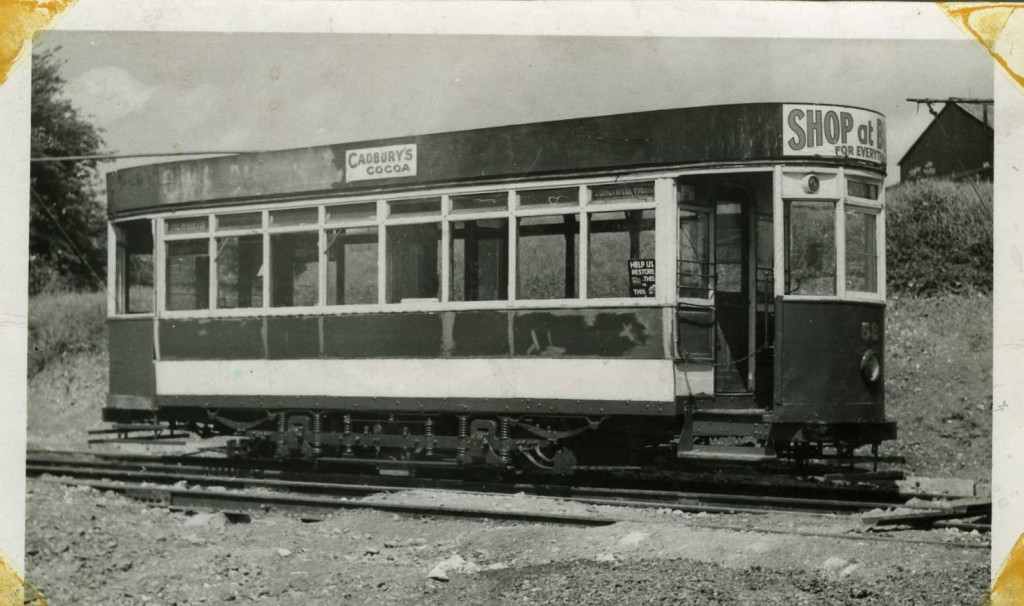 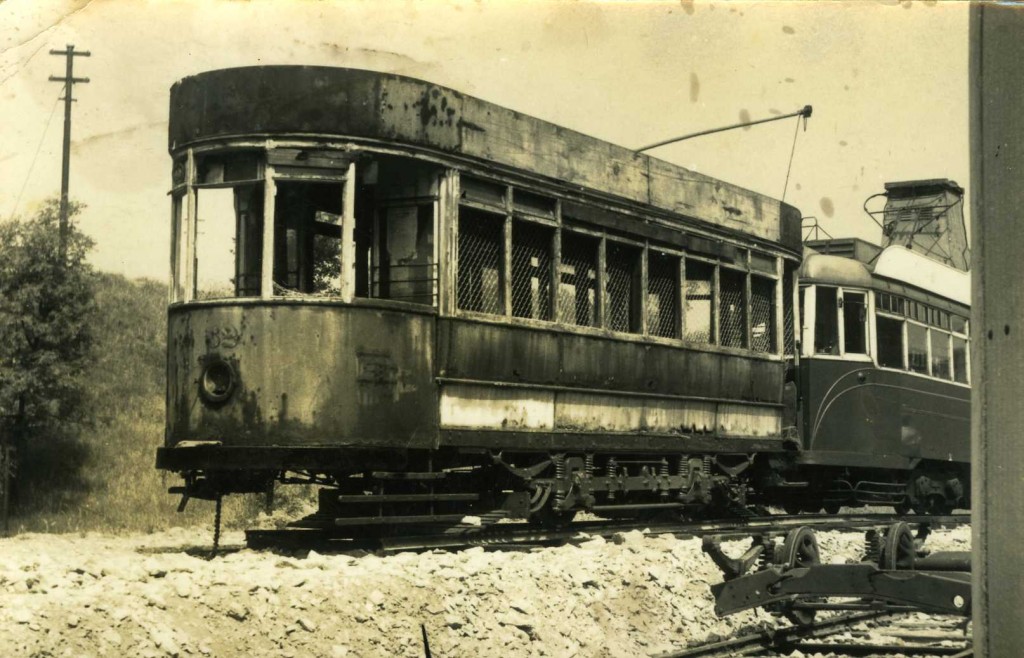 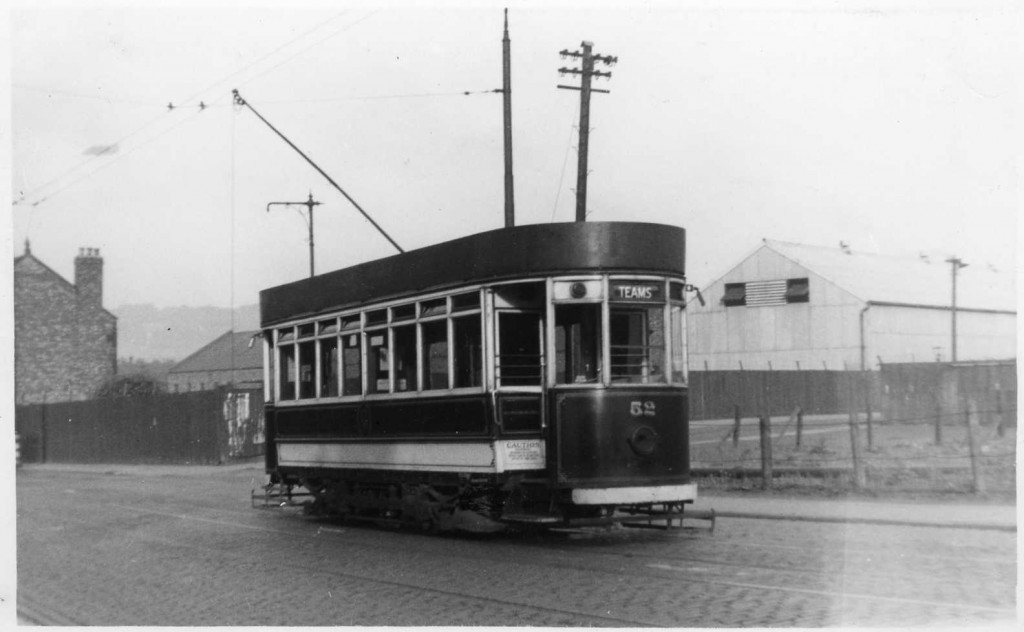 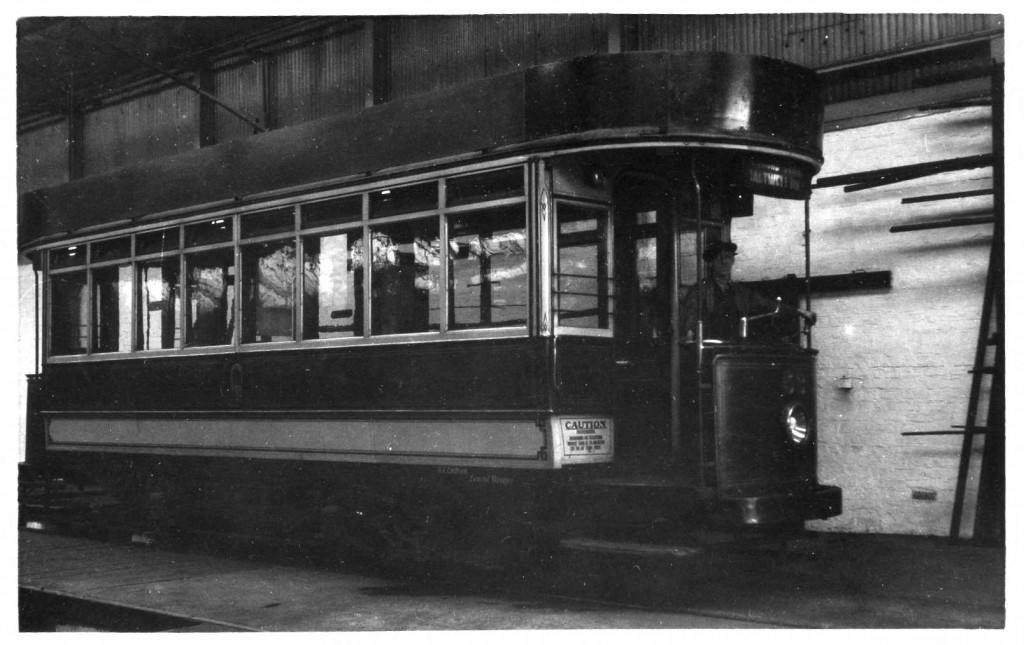 Below: Meanwhile, in the depot work continues on 280’s commissioning.  Once the paintwork details are completed it will enter service, possibly this week (at least for driver familiarisation).  The green lines will eventually be encompassed by the 1990s livery that car will carry, along with regaining its later identity as 680. 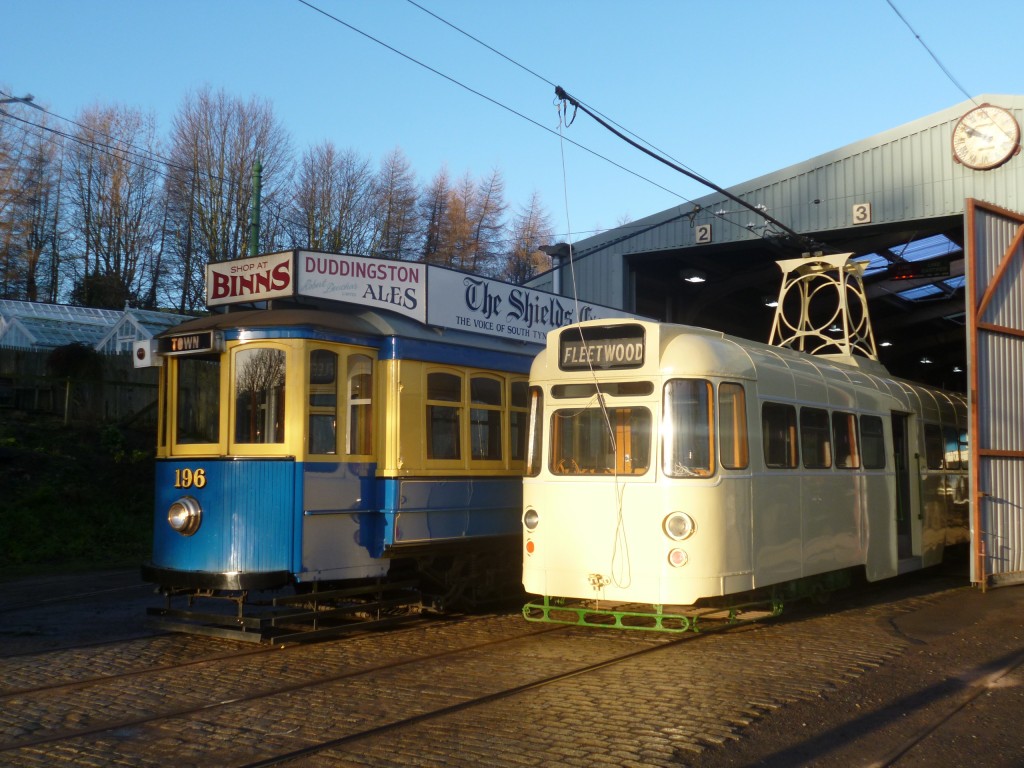