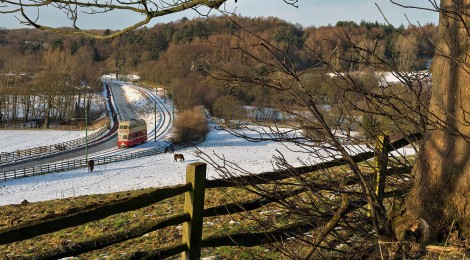 We are very pleased to announce that we have completed the purchase of Sunderland tram No.101 (formerly Blackpool 703) from the Lancastrian Transport Trust. Purchase of the tram has now been completed and it can officially join the Beamish collection, within which it has operated on loan since it was launched into service on the 18th October 2011.

In 1933 when Walter Luff took over as Manager of Blackpool Corporation Transport, he found that he had a fleet of outdated trams so set about modernising his fleet. Firstly he ordered some samples of new trams, one being a ‘luxury dreadnought’ numbered 226, an open-topped double decker seating for over 90 people, and featuring centre entrances with folding doors. The tram was so well received that a further 12 were ordered (237-249) as well as 14 similar enclosed cars (250-263). These trams became fondly known as ‘Balloons’ because of their streamlined bloated appearance.

The second world war saw a decline in the use of the open-topped Balloons and a need for more closed-topped cars, so during 1942 the open-topped cars were given closed upper decks to match their sisters.  One of this batch, 240, is the subject of this description sheet.  After the war the Balloons became neglected, as Walter Luff saw them as being old-fashioned and too slow to load; he saw the way forward as a frequent service using new Coronation single deckers.  However, when Joseph Franklin took over as Manager, he saw the potential of the Balloon cars, which therefore started to receive repaints and extra seating capacity, with bench seats being fitted to each end of the upper deck on most of the trams, bringing their seating capacity to an astounding 94.  With hindsight, it is lucky that the Balloons were not withdrawn and scrapped, in view of the problems with the Coronations, causing them to be prematurely scrapped.  There were also some minor changes made to the Balloons around this time to modernise them, with most receiving single destination displays at both ends, new rubber mounted roof windows. In 1968 all trams were renumbered, Balloons 237-263 becoming 700-726.  240 became 703. Car 703 was painted into wartime livery in 1995 to Celebrate 50 years since VE Day and also received a trolley for a short time as it retained (and still does) most of the original Balloon features, including curved roof windows.

Winter 2003 saw 703 repainted in 1980’s livery and it took part in a cavalcade with four others in 2004 to mark the 70th anniversary of the English Electric trams being built.  However in 2009 703 was withdrawn from service and transferred to the Lancastrian Transport Trust.  Inspired by its similarity to English Electric tram 99 purchased by Sunderland, 703 was repainted into Sunderland red and cream livery and transferred to Beamish Museum on 15 September 2010 on a five year loan as a working exhibit, masquerading as ‘Sunderland 101’ Below: Jason Cross’ photograph shows 101 departing the Town en route to Foulbridge. 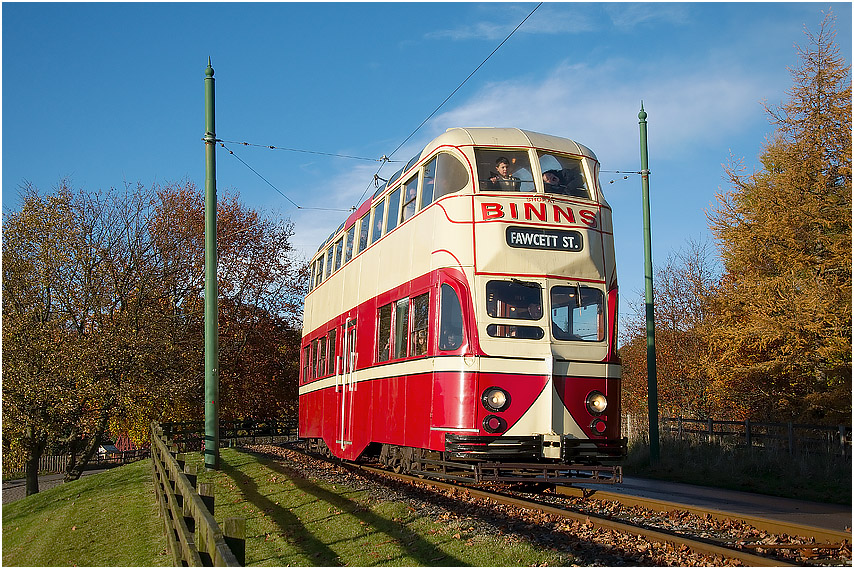 Below: Dave Hewitt photographed 101 out in the country in the winter of 2012, with fresh snow on the ground. 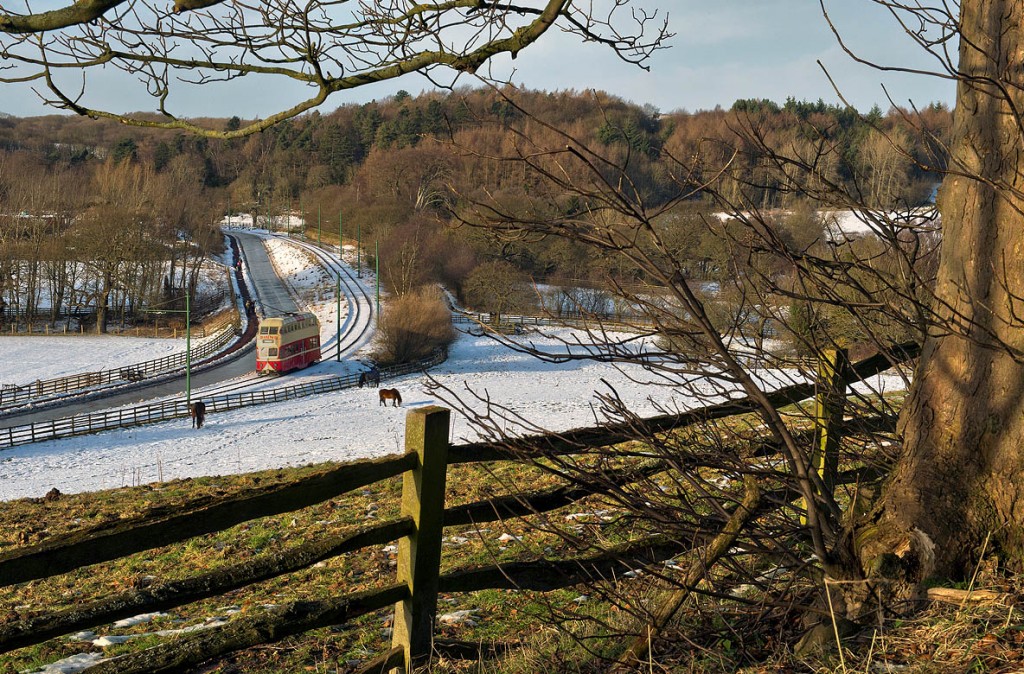 Below: A reminder of 703’s transformation into 101 at the instigation of the LTT and which took place at Blackpool Transport’s Rigby Road works. Photo by the LTT 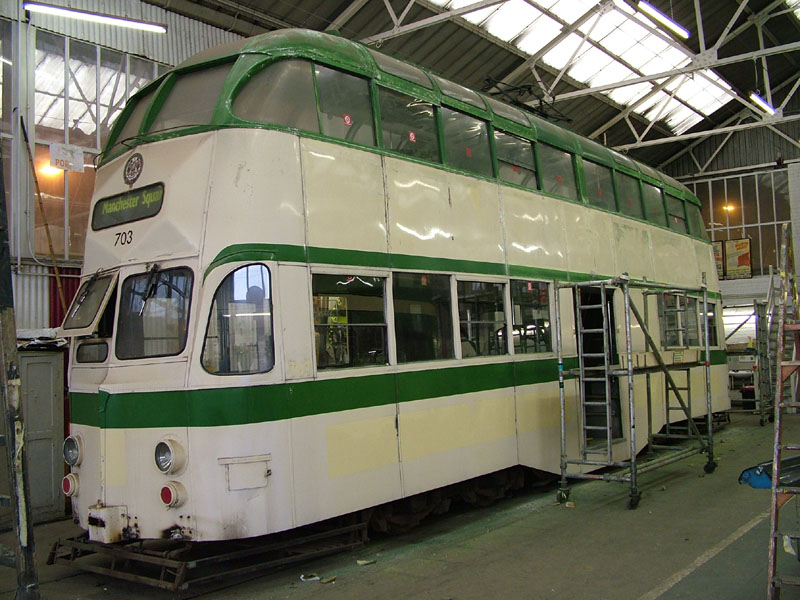 Below: 703 looking very much more like the tram we know today as 101!  Photo by the LTT 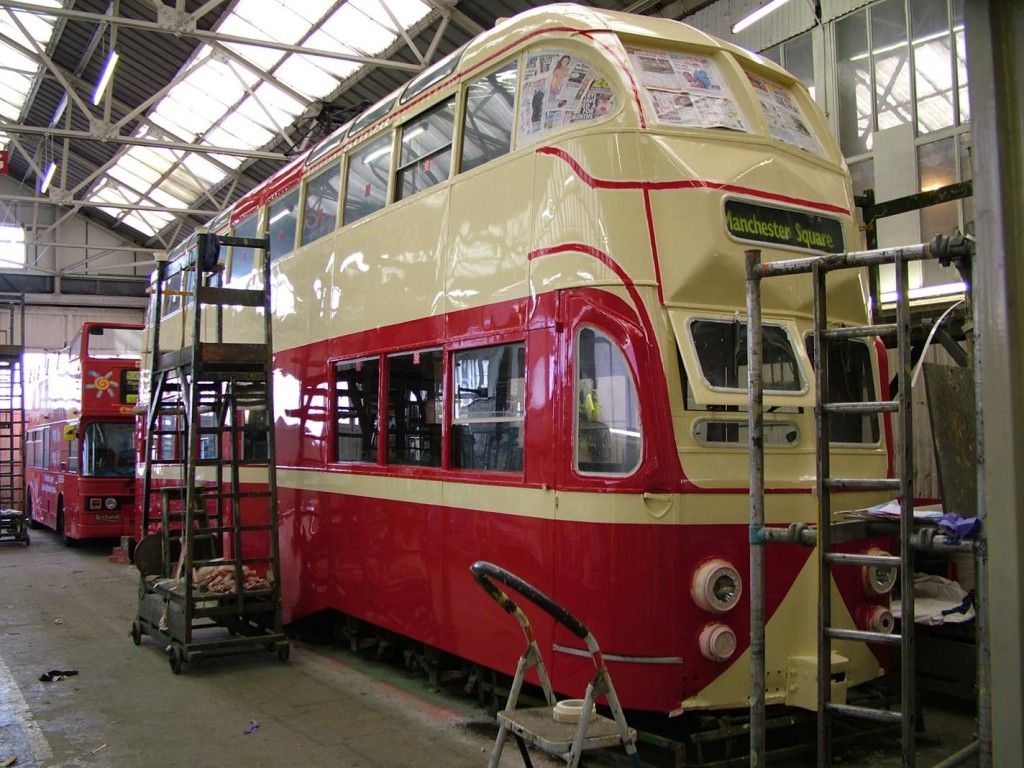 Below: 101 made one sortie in this livery at Blackpool, as seen here.  Much work was required when it arrived at Beamish, not least the strengthening of the roof, fitting trolley planks and a trolley pole.  The bogies also received attention and as well as a deep clean and the addition of black lining to the cream bands below the windows. Photo by the LTT 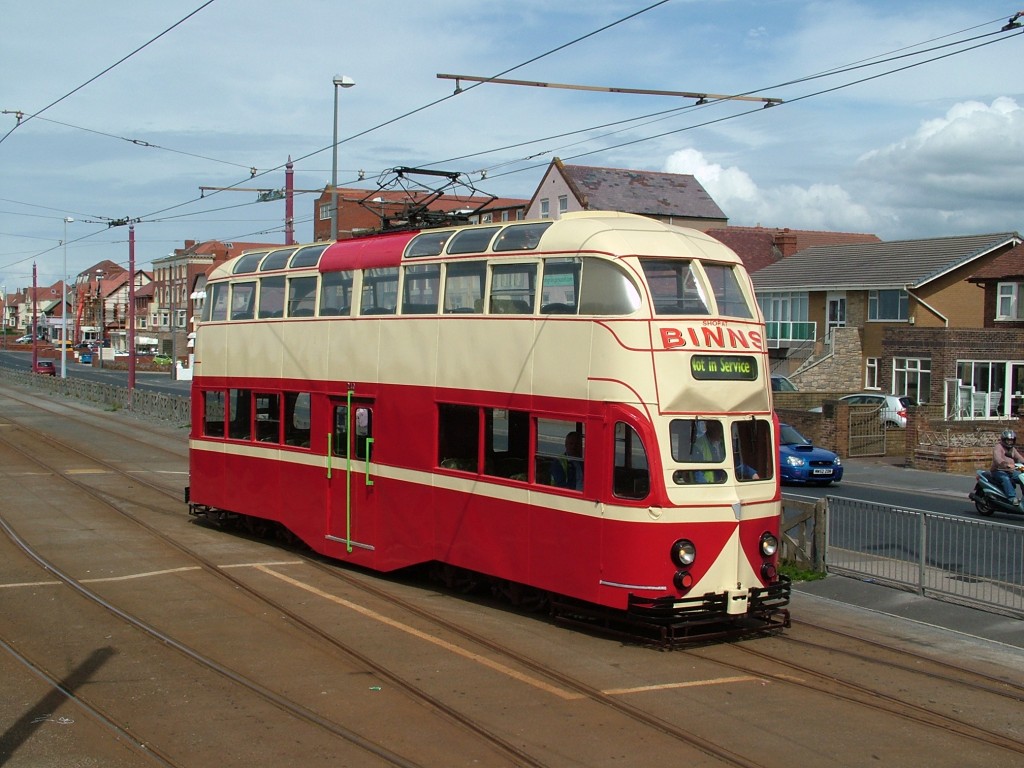 Below: 101’s first runs at Beamish, taken on a rather elderly phone, but notable as it was its first day on test at the Museum. 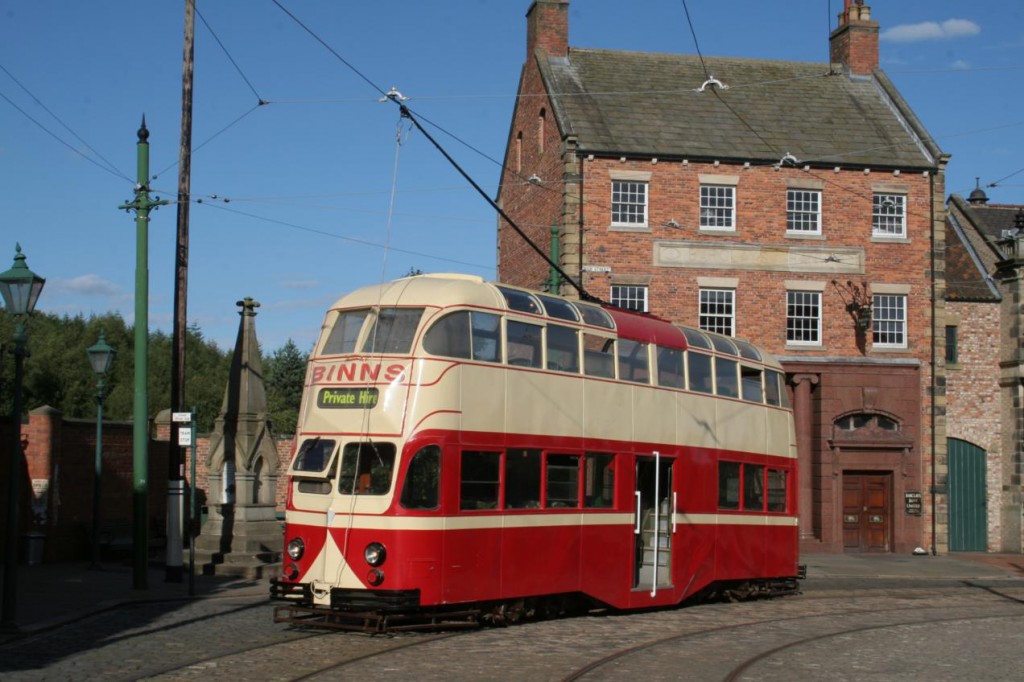 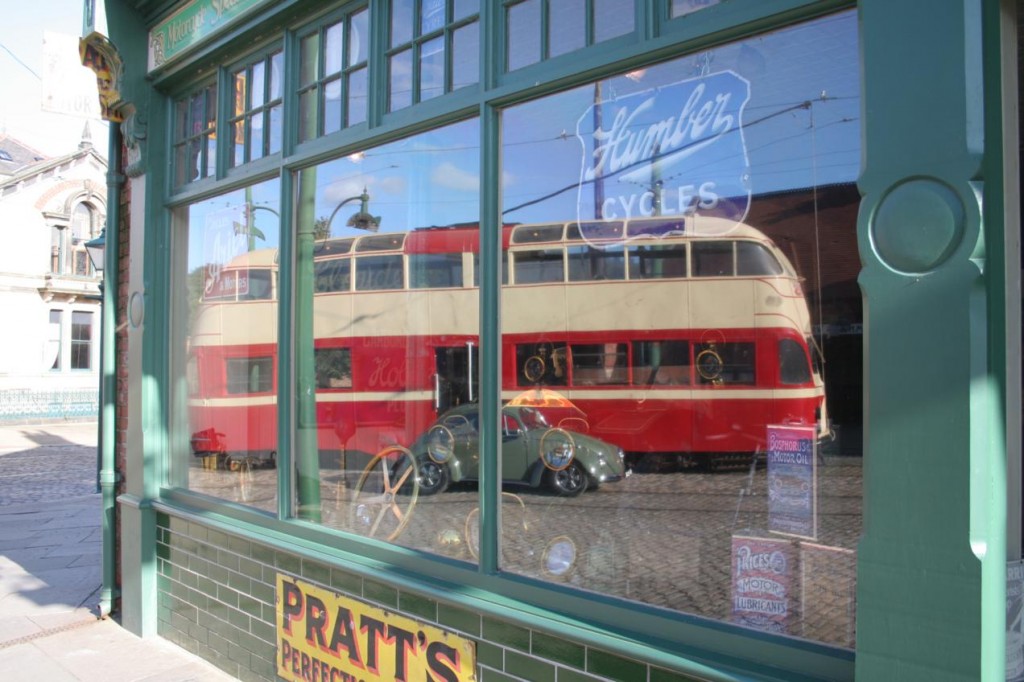 Below: Soon after, 101 went through a driver training programme before entering service.  It was originally intended to limit its use, but such was its usefulness, popularity with the public and crews and great ability to move the masses, it has seen much more use than expected. 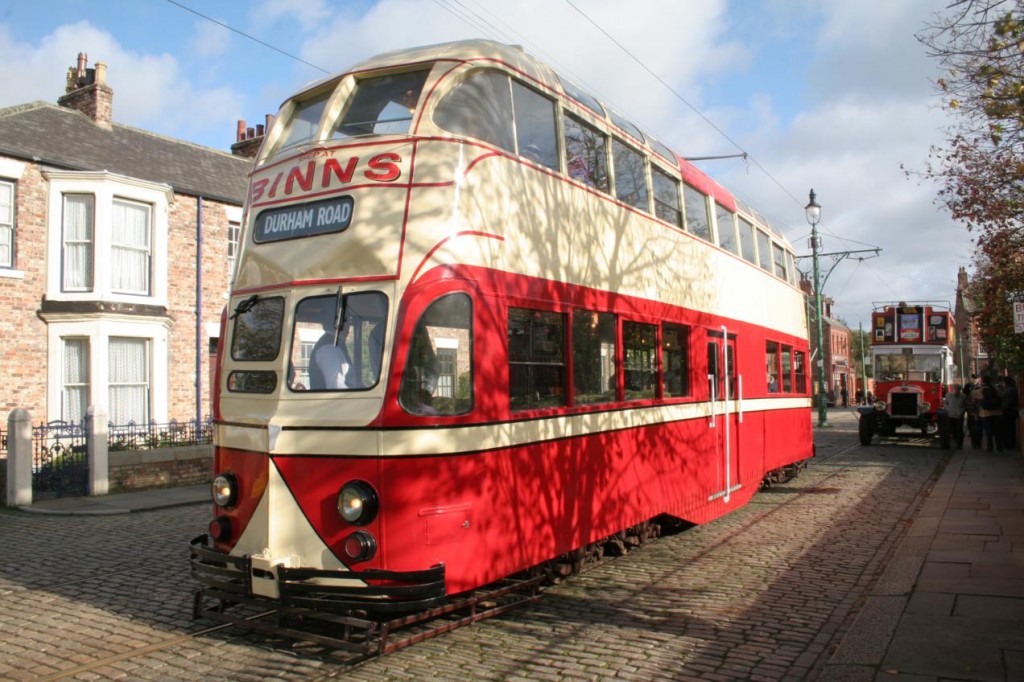 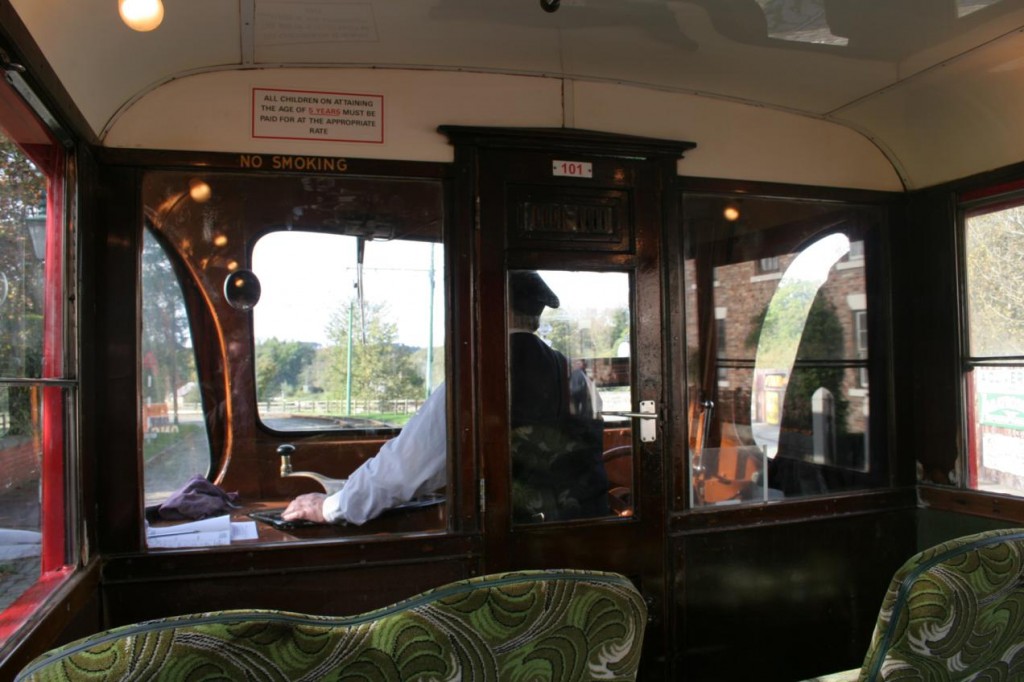 Eric Berry, Chairman of the Lancastrian Transport Trust, said, “We are very pleased that the future of Balloon 703 as a heritage tram is secured by it becoming part of the Beamish tramcar collection. In view of the large number of Balloons already being preserved in Blackpool it made sense for 703 to retain its Sunderland identity and to remain at the museum for the enjoyment of its visitors.”

101 will now fit into our longer term maintenance programme which will ultimately see it comprehensively overhauled and I would also like to see the original split blind destination boxes reinstated.  This, along with a repaint and some other tweaks, would bring it more into line with the very similar appearance of Sunderland 99.  For now though, the tram will continue to be used as a popular and effective member of the fleet.