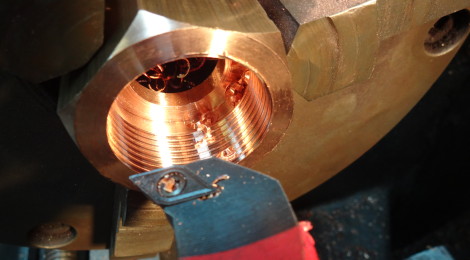 Well, autumn seems to have arrived – golden leaves are appearing across the Museum and we’ve been basking in warm sunshine for over a week!  Rain last week did reveal that the gutters that need attention on site (an ongoing job), which are a mixture of cleaning and renewal.  Through the summer a quantity of wooden guttering has been purchased and painted in readiness for installing over the colder seasons, so this is something the Site Support guys will be starting shortly.  Meanwhile, here is the usual review of what’s happening in the department…

Duke of Sutherland Saloon 58A

Below: After and Before – moving 58A to reveal the unpainted sections of its wheels gave the opportunity for this view of one of its Mansell wheelsets – the left has been stripped/scarped, painted and varnished whilst the right hand is exactly as it arrived.  The white wall tyres (a personal ‘hate’ of mine!) were added later in the coach’s life and won’t be a feature of this restoration!  The varnished teak shows the composite construction of this type of wheel, which was designed to reduce noise in operation. 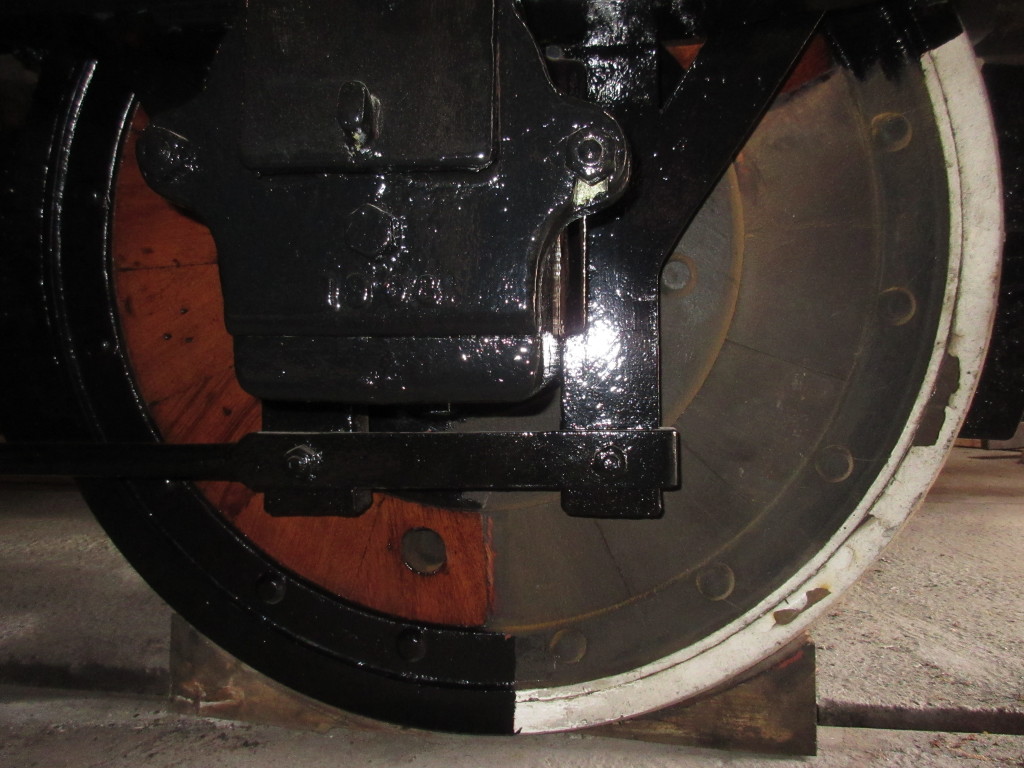 Below: A drawing, including cross-section, of this type of wheel. 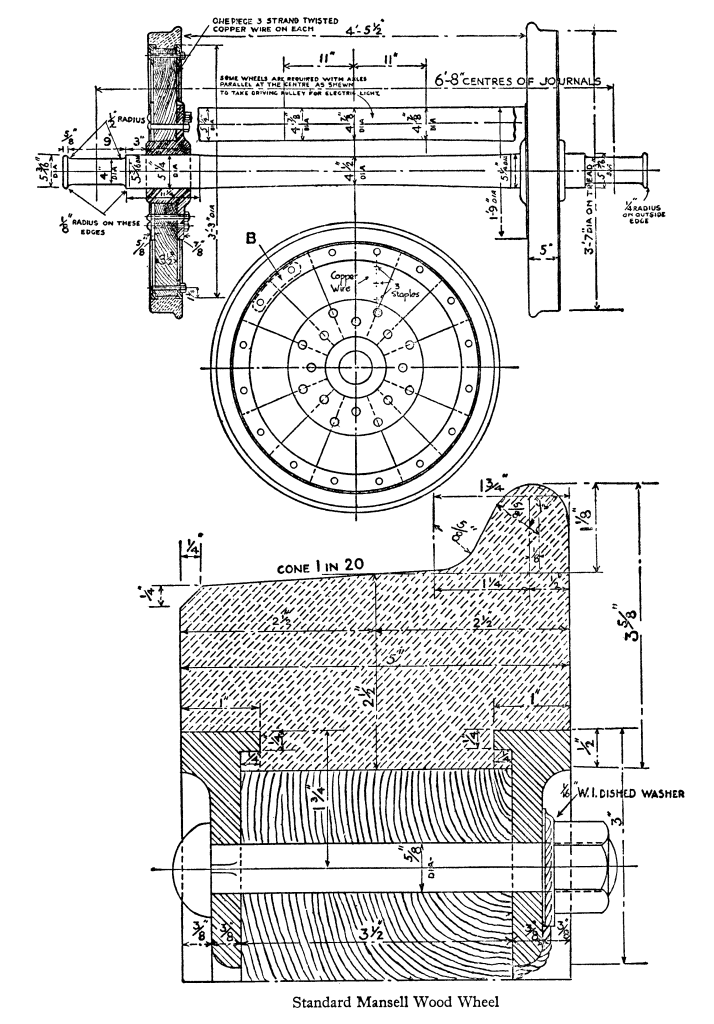 Here is the latest sequence of photographs from RHEC Technician (Engineering) Chris Armstrong, which show the variety of work which passes through the welding/fabrication bay and machine shop.

Below: This sequence of photos shows the clutch ‘thrust’ face for the Fordson N tractor, which, as seen in the first view, was badly worn and inhibiting clean gear selection.  Chris built this up with brass (second photo) then machined it to original tolerances (third and fourth photos) enabling the tractor to be re-commissioned in time for the Festival of Agriculture. 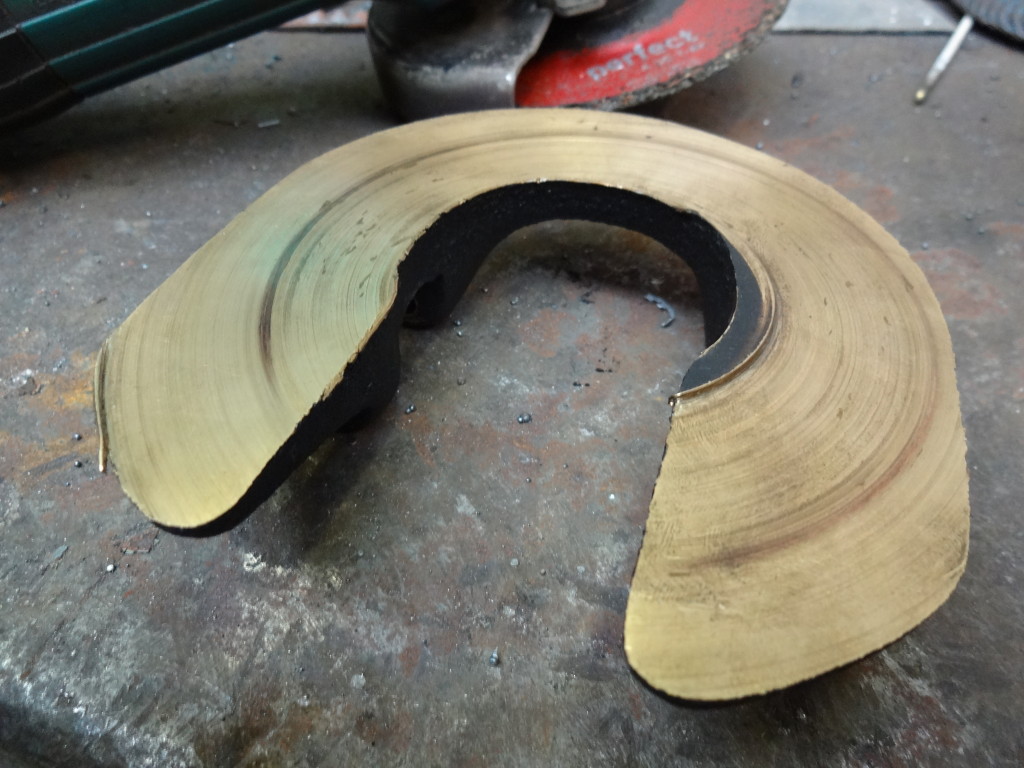 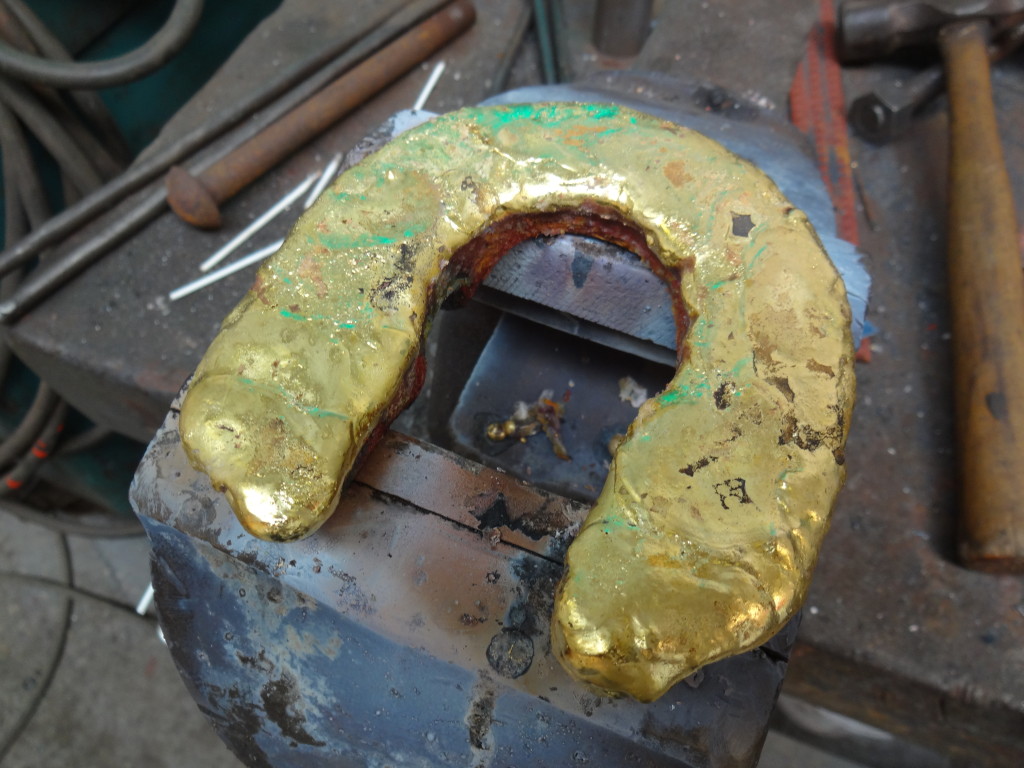 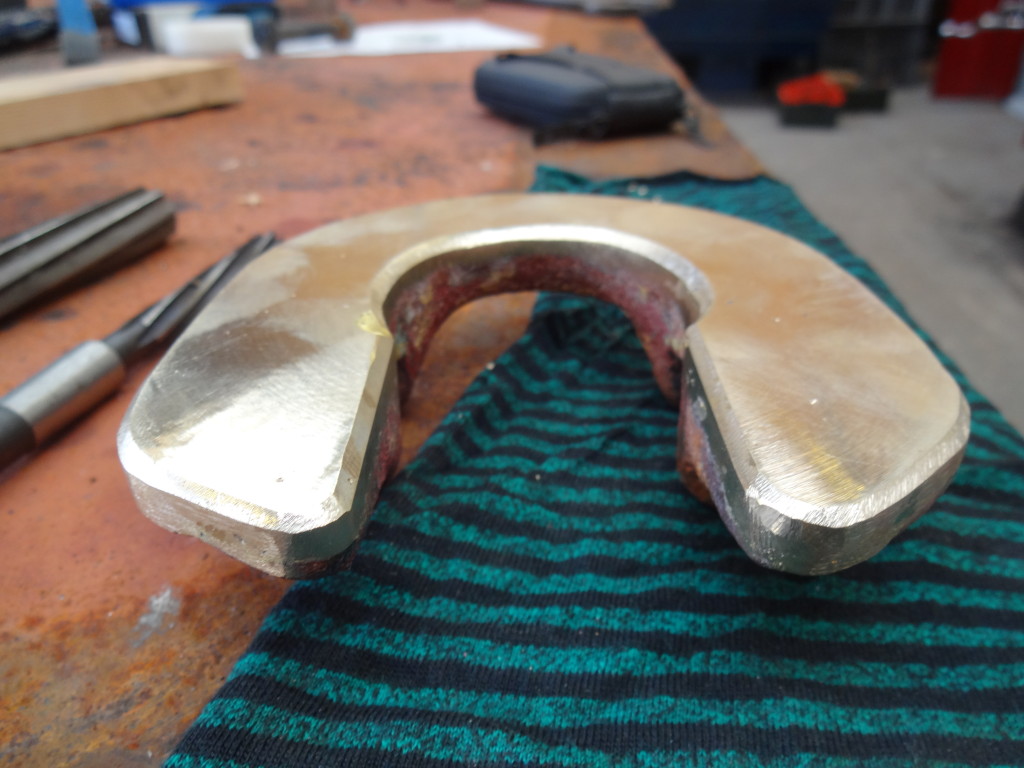 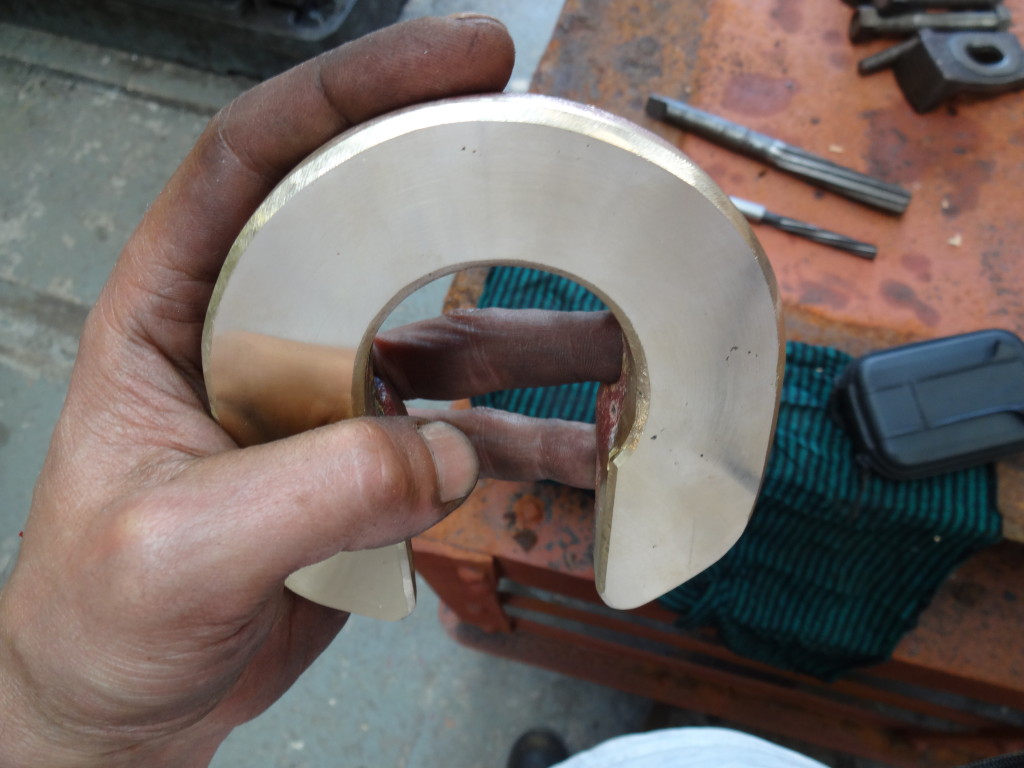 Below: Chris then had this aged radiator header tank to repair, including building up the base plate in order that a good fit can be achieved onto the core.  The sequence shows the tank as received, then new plate being added and clamped ready for welding, the third view shows the plate after the weld as made and finally we see the finished work after cleaning up and dressing – pretty impressive stuff and a component nicely recovered for future use… 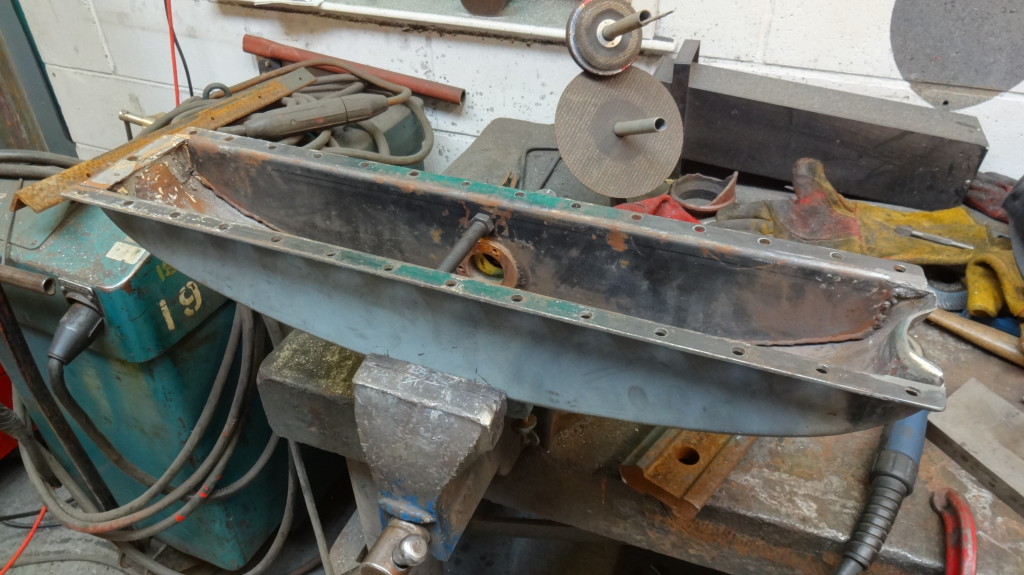 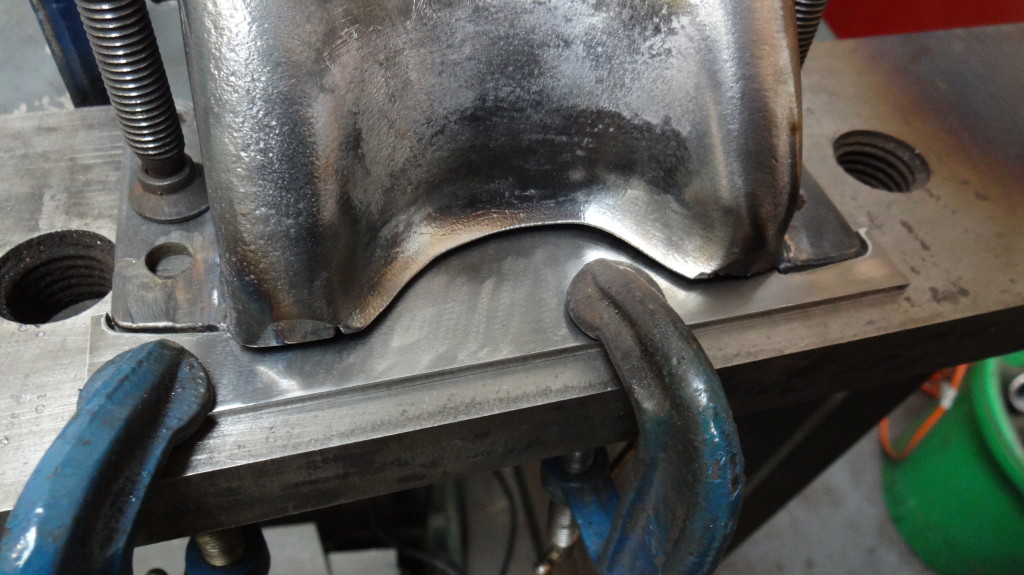 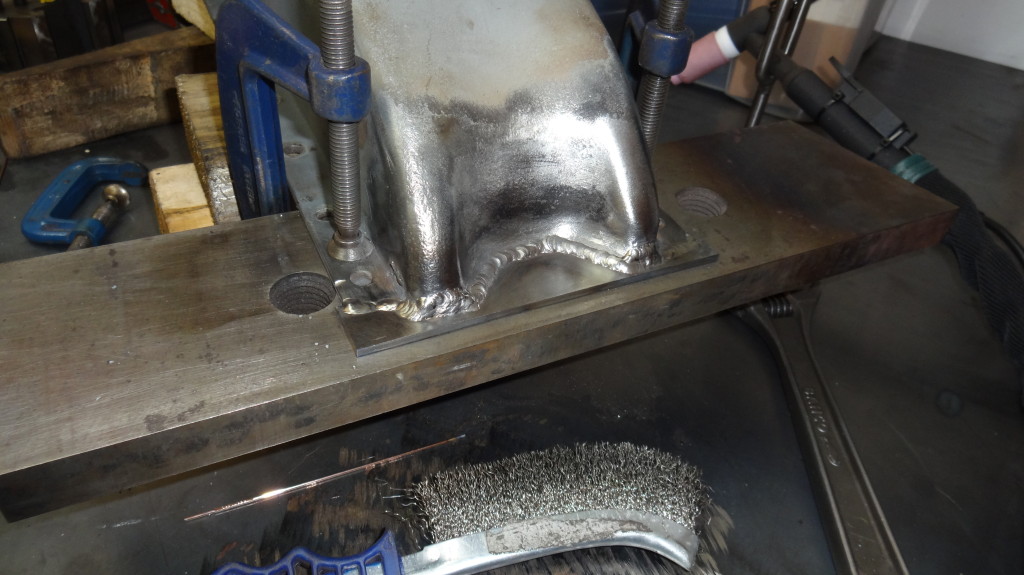 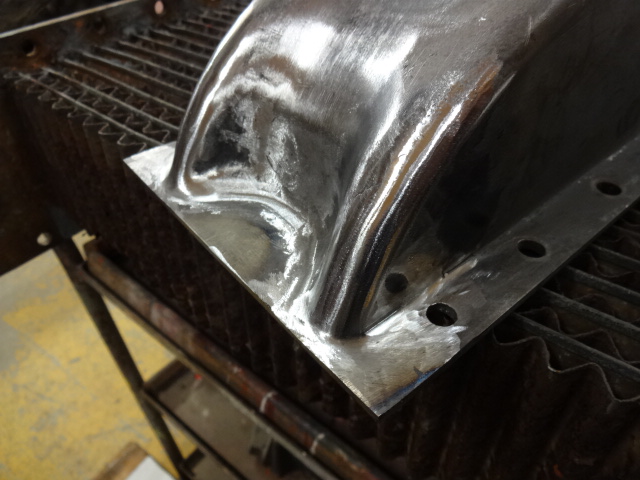 Below: Also in the latest batch of Chris’ photographs are these two views showing pull-rods from Sheffield 264 – these are re-pinned in order to remove excessive play from the pulleys over which brake chains run.  The pulleys themselves have also been re-bushed, as seen in the first photograph. 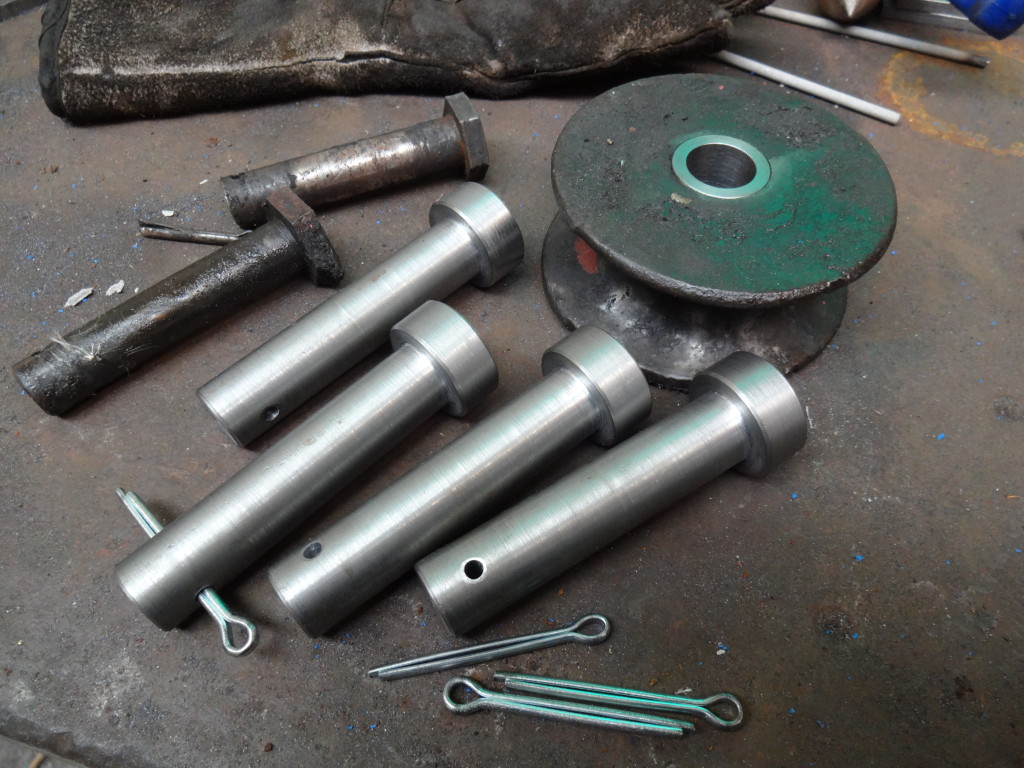 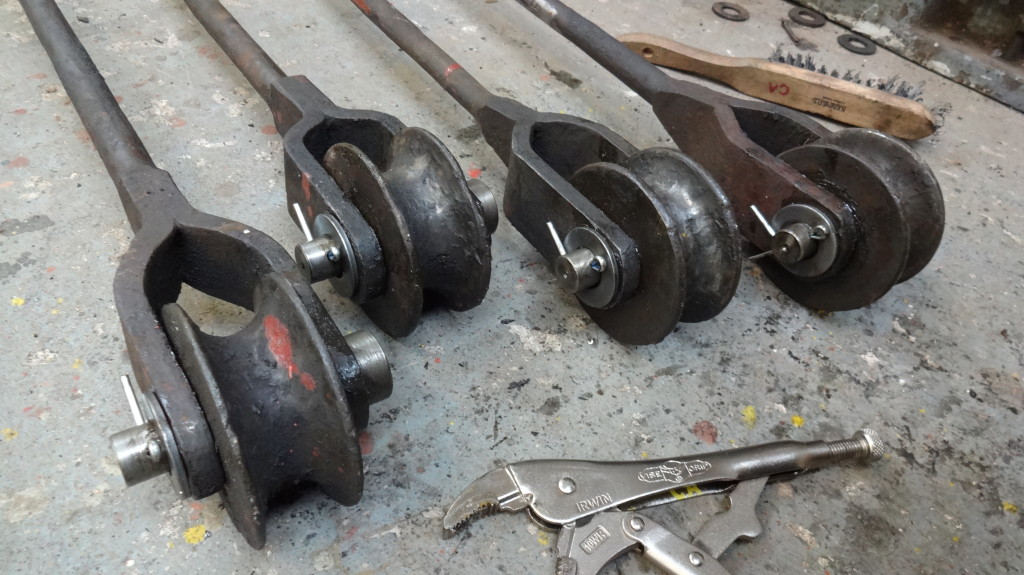 Below: And finally in this sequence, Chris and Dave Young have both been manufacturing substantial unions for Puffing Billy.  The steel pipework and fittings within the ‘egg end’ of the boiler (for clacks, steam feeds etc.) are life expired and the decision was taken to renew these in copper, for longevity, thus requiring some bespoke fittings.  Dave kicked things off making two, followed by Chris making two more and then ensuring all were compatible with each other (for Dave G’s benefit when he comes to fit them!). 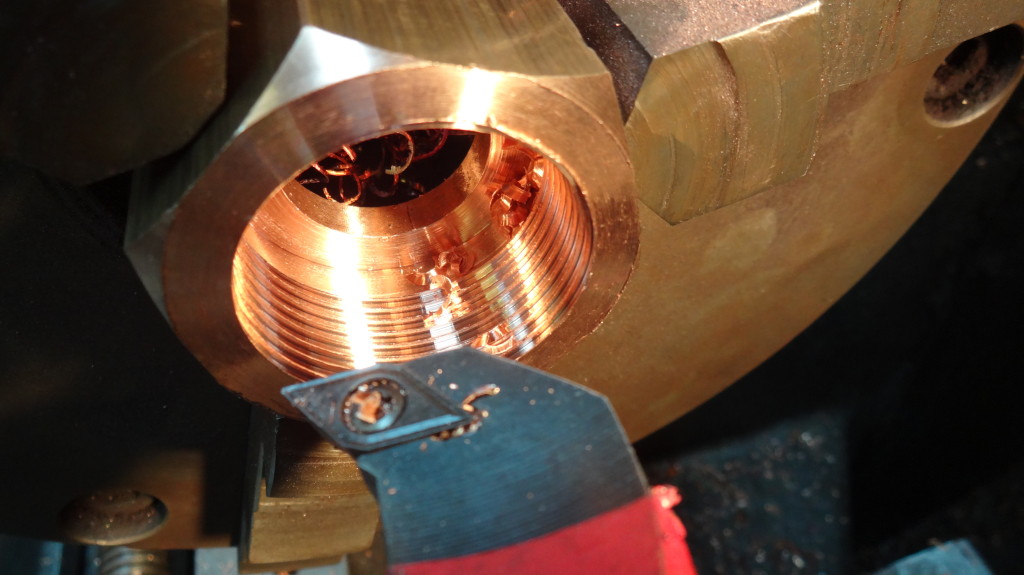 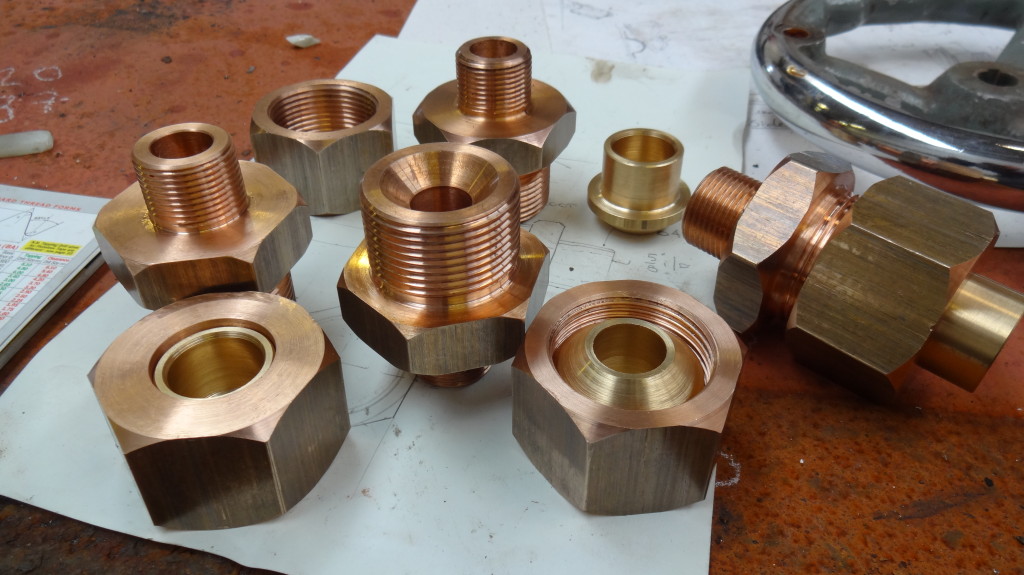 Below: I referred in an earlier post to the work underway on Dunrobin’s frames and bogie, but hadn’t any photos with which to illustrate this.  Chris Armstrong took these when we were at the SVR so hopefully they fill the gap.  The first shows the pedestal for the bogie after the known crack was welded, dressed and tested (the white powder is for magnetic particle inspection). 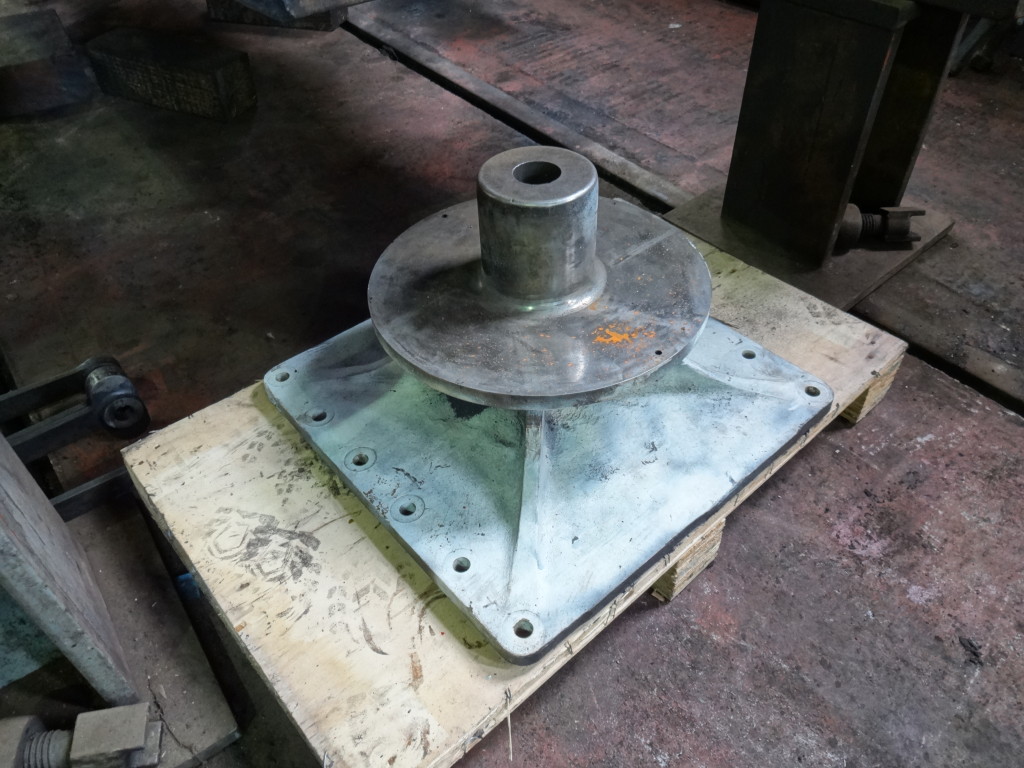 Below: An overview of the frames which are now being prepared for removal of some of the riveted fittings in order that these can be reattached securely.  We are also told the cylinder block will be ready imminently and so the delivery of this to Bridgnorth is eagerly awaited… 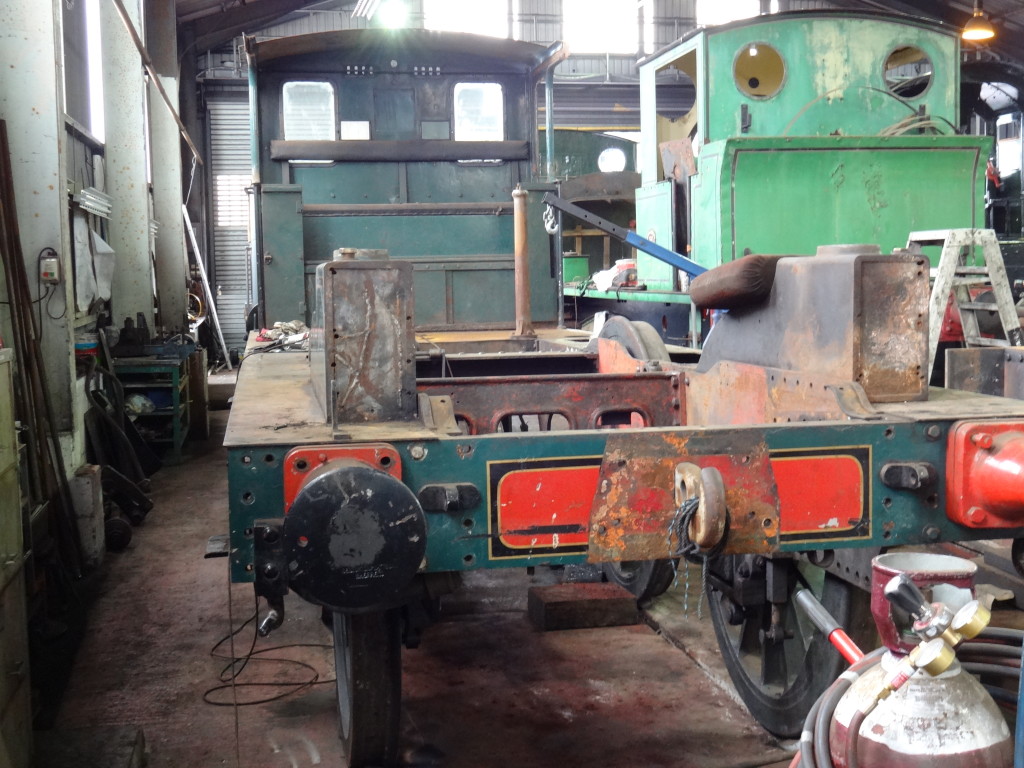 Below: The fully stripped bogie awaiting repairs to re-secure some of the components that form the horns/stays. 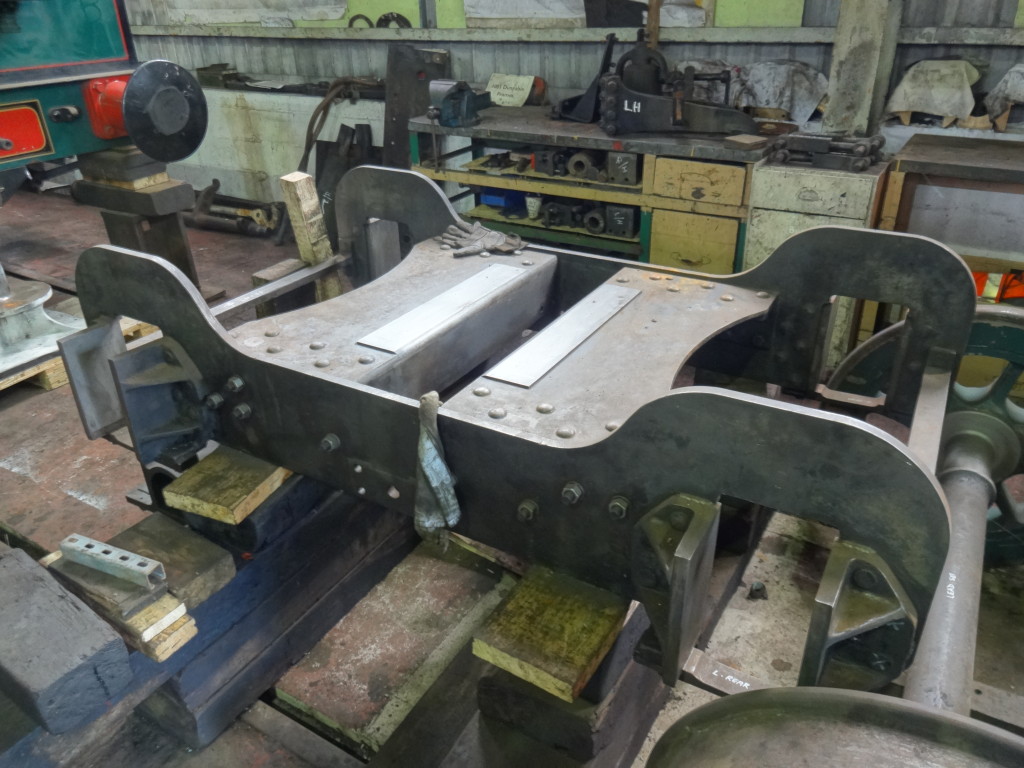