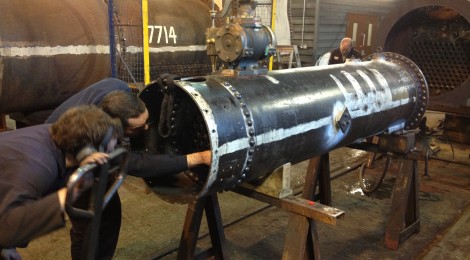 Matt and I had a productive couple of days at Bridgnorth working with the SVR team on Samson’s boiler.  This is now complete and awaits some attention before submission for a (brutal!) 320psi hydraulic test.  All being well it will be back at Beamish in early December with a view to steam testing in late January.

Below: Since we parted on this subject last time, the boilersmiths at Bridgnorth have riveted the backhead onto the angle ring, as seen here.  They have also added some seal welds to areas out of sight and therefore prudent to weld rather than caulk. 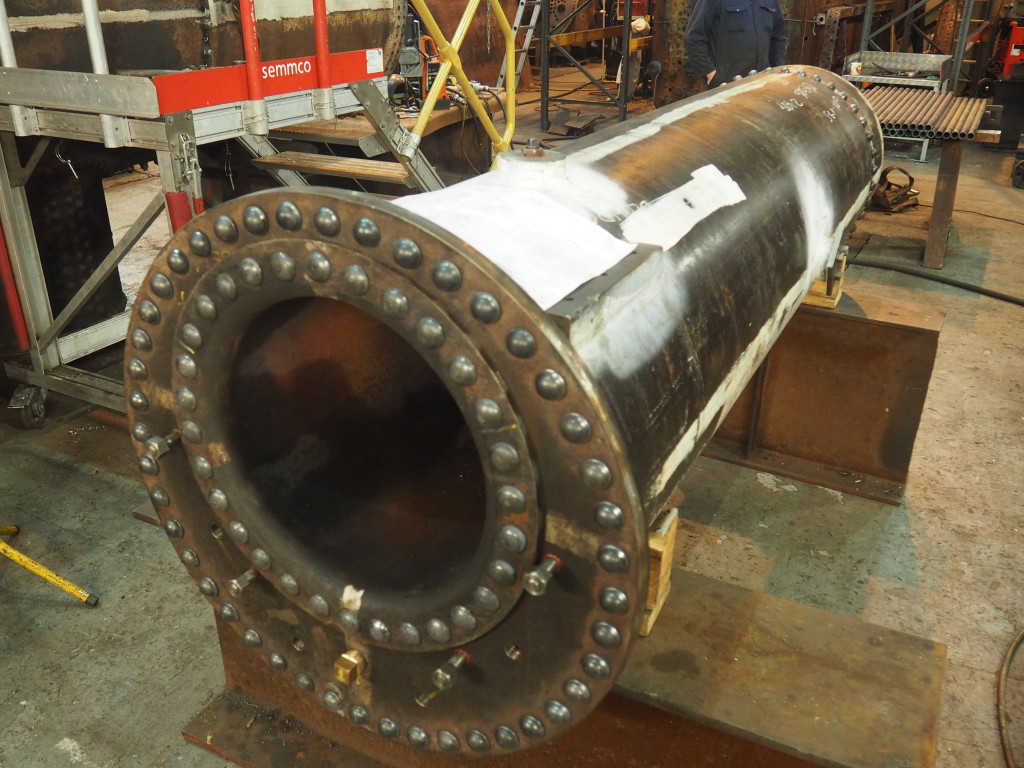 Below: Our first job on Tuesday therefore was to insert the tubes (the front tubeplate having been prepared by the engineers to allow ease of pushing the tubes through the front tubeplate and through into the tighter holes of the firebox tubeplate).  This work was rapidly accomplished, there being only 37 tubes to worry about! 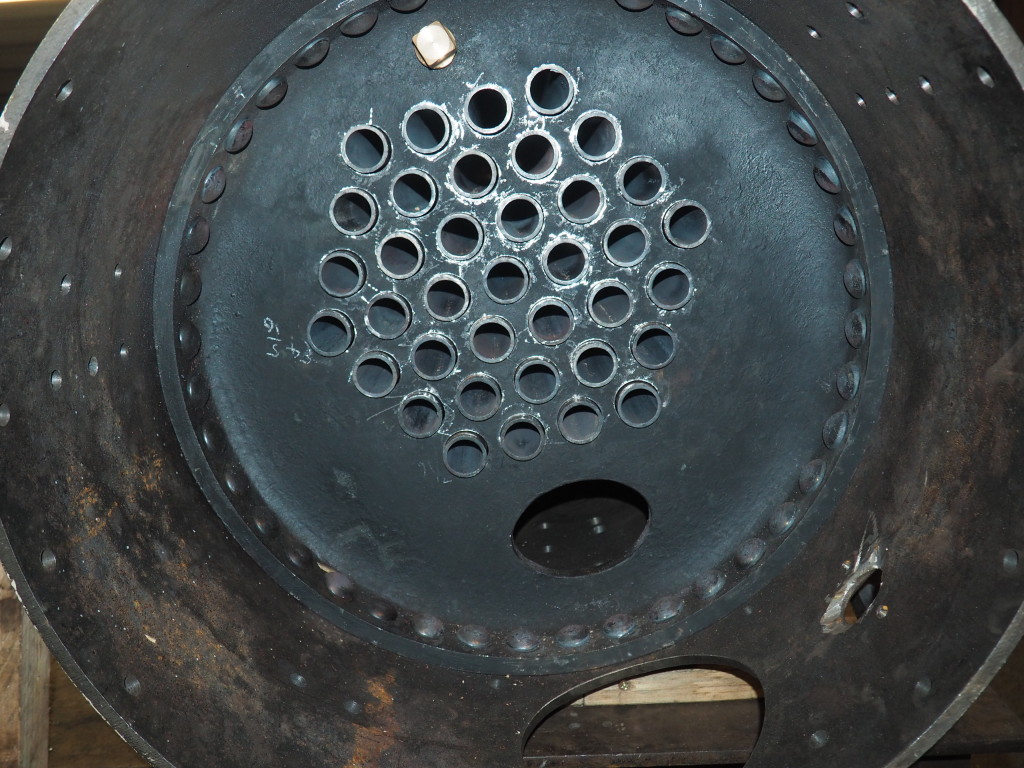 Below: Once the tubes were fitted, they then needed to be expanded.  For this, a set of expanders is inserted into the firebox tubeplate, against a collar (to preserve the amount projecting from the plate) and then held firm.  Meanwhile an air motor drives a similar set of expanders in the front tubeplate.  This fully expands the tubes into the front tubeplate and ensures they do not rotate or slide within their holes.  This view shows the firebox tubeplate and some of the extension bars needed to reach into this very cramped space. 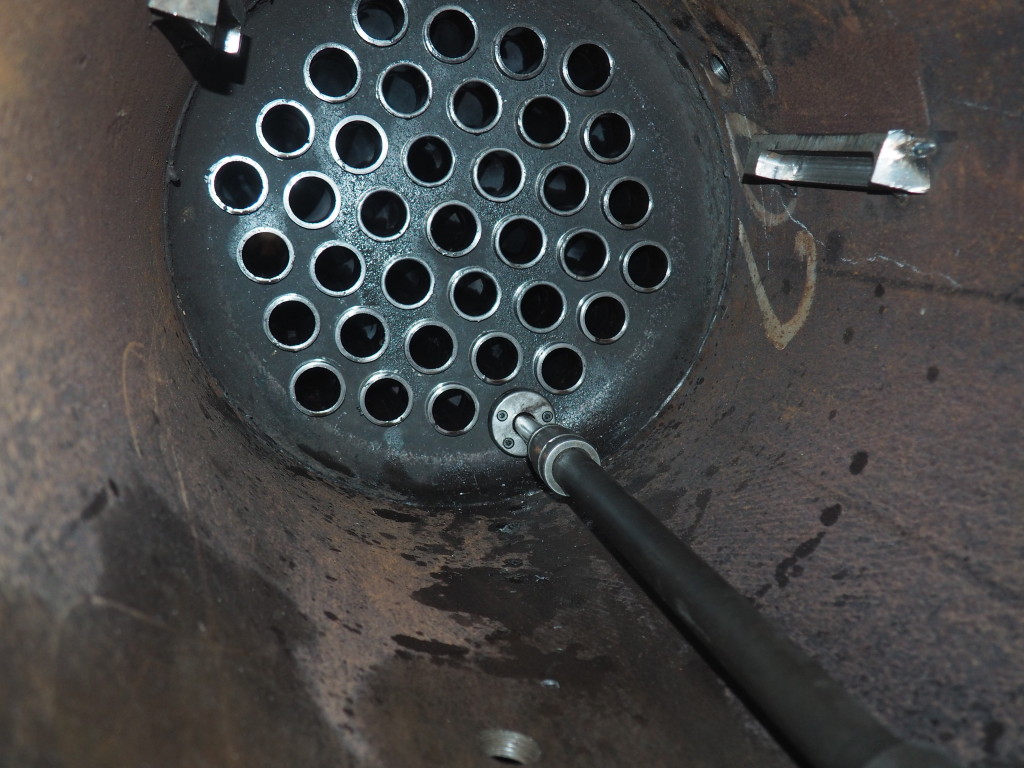 Below: A tube expander.  This consists of a cage of rollers, tapered, and a mandrel, which is inserted through the middle (it is not attached).  As the mandrel is rotated, so the cage and its rollers are, rolling the tube outwards and tightly into the tubeplate.  The motor is reversed in order to release the mandrel and enable the rollers to be removed and moved to the next tube.  The process is then repeated.  As this was a two man job there are no photos of this underway! 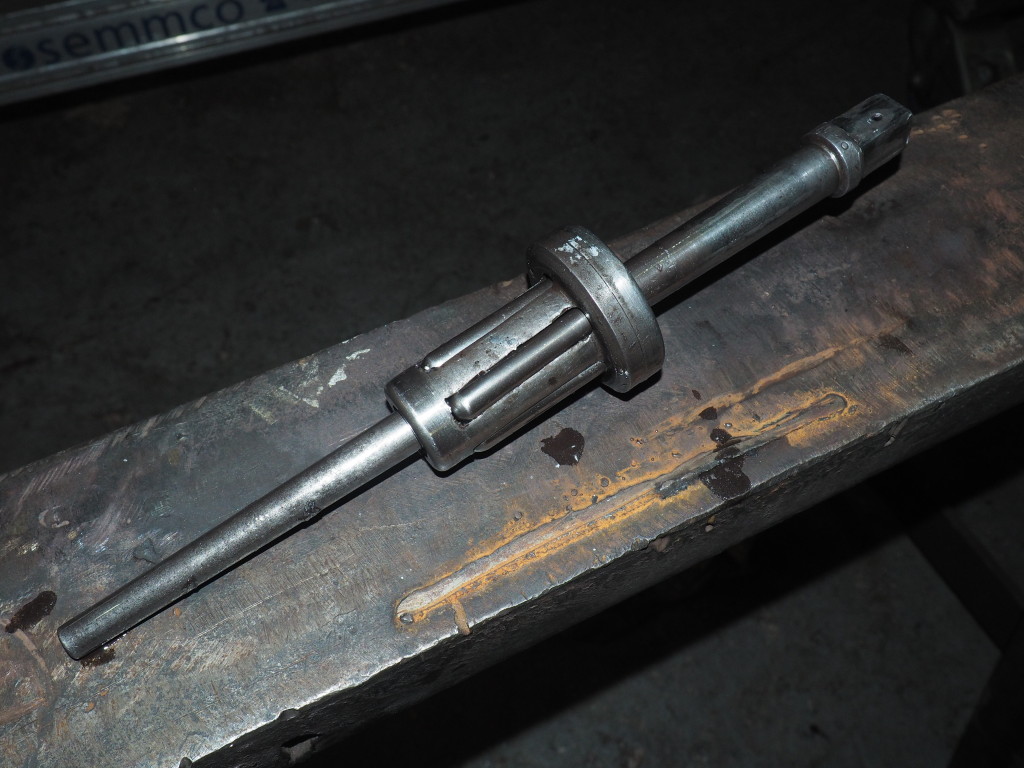 Below: We then had to caulk the various joints to make them water and steam tight.  Again an air tool, this time a hammer, is used, with an anvil inserted into the end.  This is applied to the joints, in varying angles depending on how the joint is being tightened, in order to close up any gaps and seal the plates.  Here I am caulking the front tubeplate… 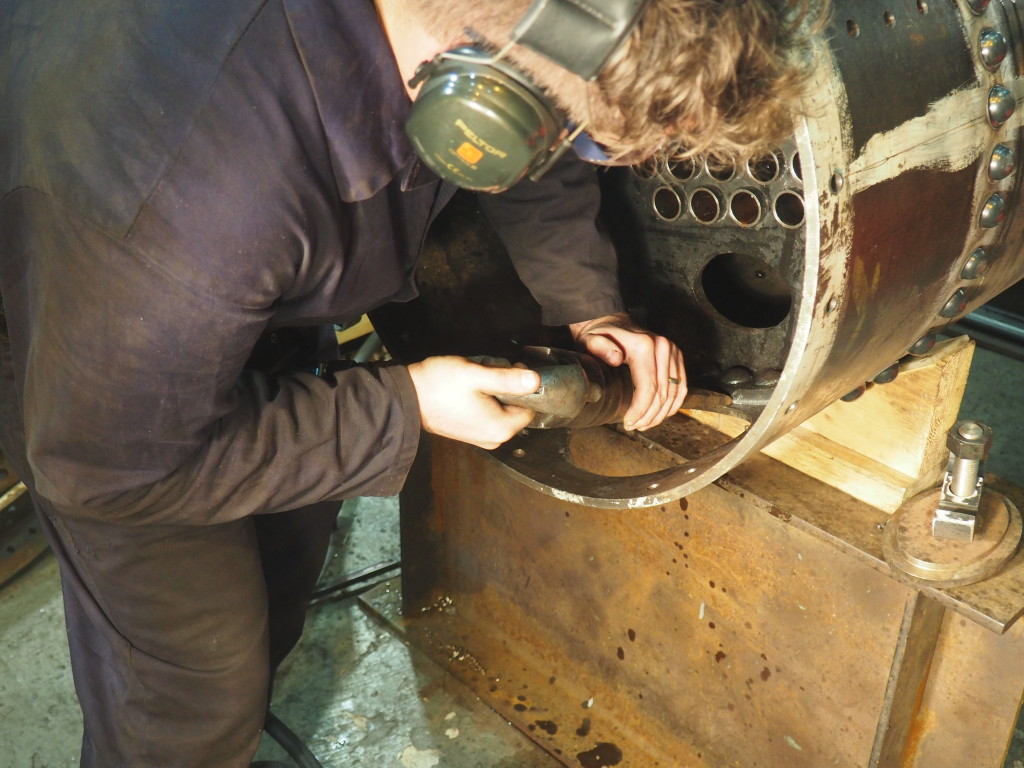 Below: …whilst Matt works on the angle ring. 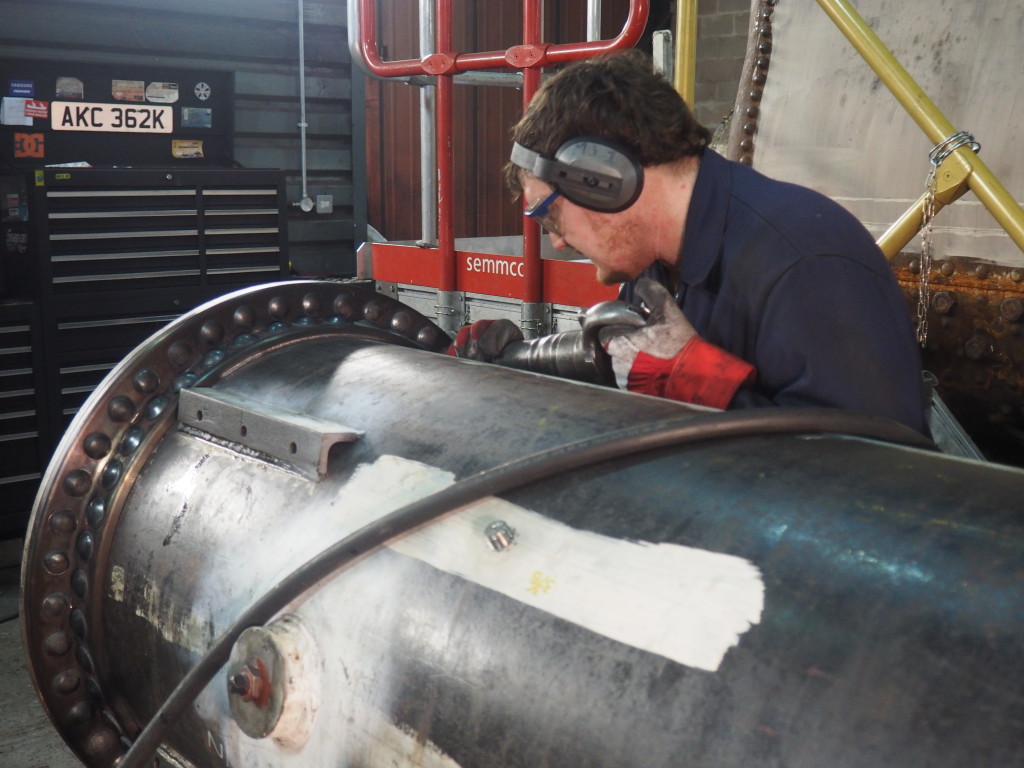 Below: An internal view of the tubes.  Note the blind bushes, welded into the shell to enable structural fittings to be secured without compromising the steam tight necessity of the boiler. 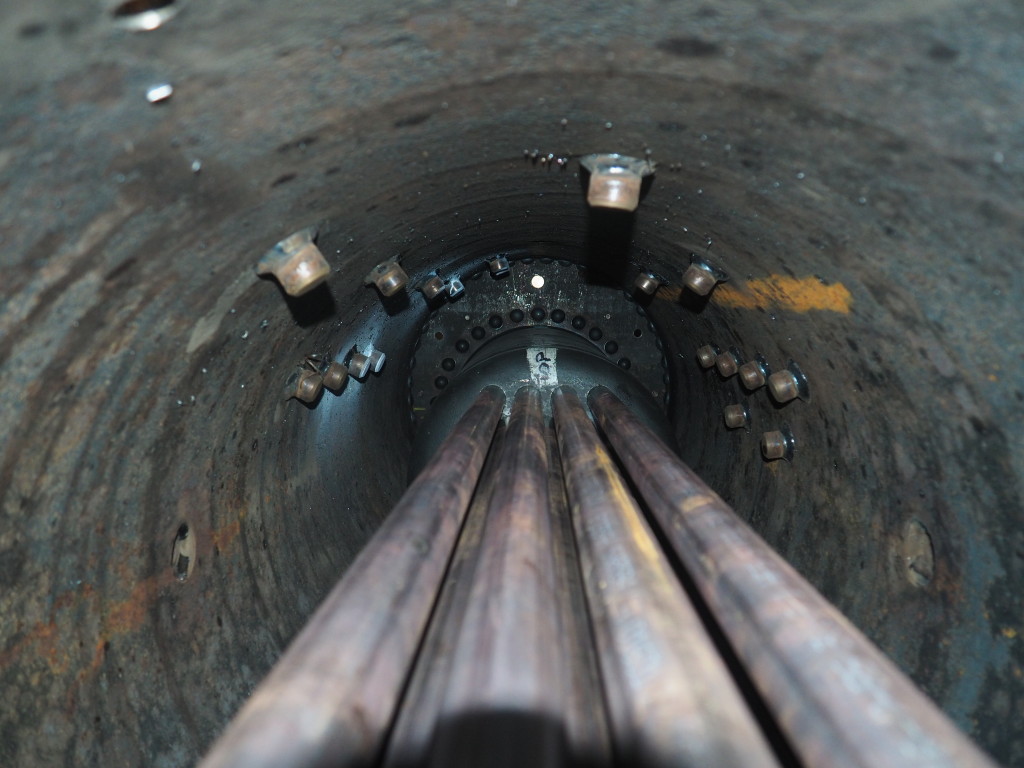 Below: Tilting our view upwards reveals the carrot bolts, so named because of their shape, which secure the cylinder block to the shell.  The shape ensures that as the nuts are tightened above, the bolt is able to firmly bite into the shell and create a steam-tight joint.  The two steam passage holes are just visible in the centre of the ring of bolts, similarly two small drain holes to reduce standing water outside of the barrel shell but within the cylinder block. 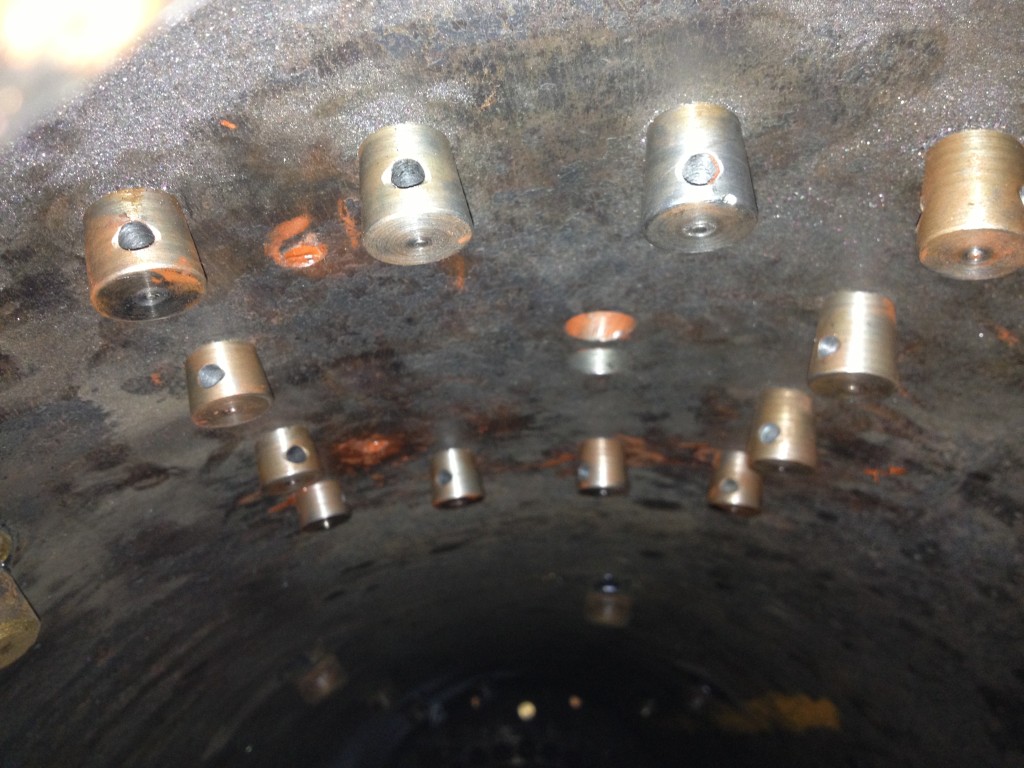 Below: Dave, the SVR boilersmith, demonstrates the very restricted nature of Samson’s firebox!  He was caulking the two supporting stays that are fitted to the front of the firebox and which offer structural support at this point of the boiler.  These are made of monel steel, an alloy very resistant to corrosion (and popular as the material for bass guitar strings).  Once inserted, the ends are heated then hammered over to the appearance of a rivet. 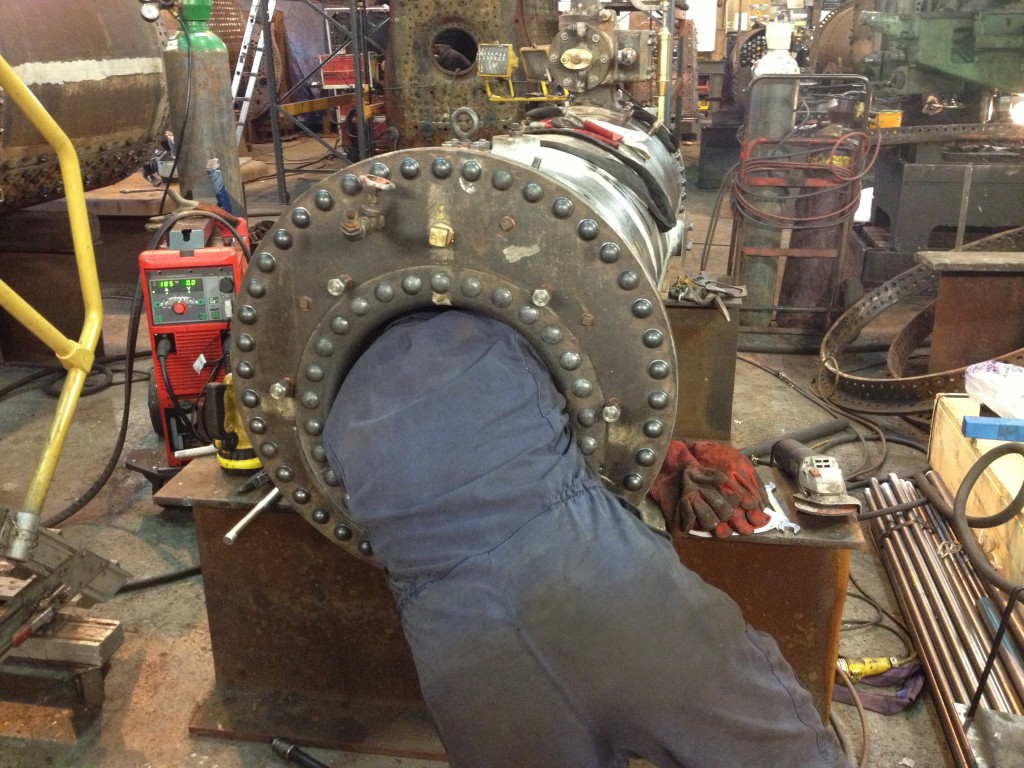 Below: By the end of the two days, the boiler was moved to the testing area for filling with water.  This was done at mains pressure and revealed a good deal of caulking remains to be carried out.  Further work will take place before the pressure is increased towards test pressure and then, hopefully, this process will conclude with a  hydraulic test for the boiler inspector.  As well as this work, a paper assessment is underway of all materials and their traceability (certificates etc.) as part of the process for gaining approval for a new pressure vessel. 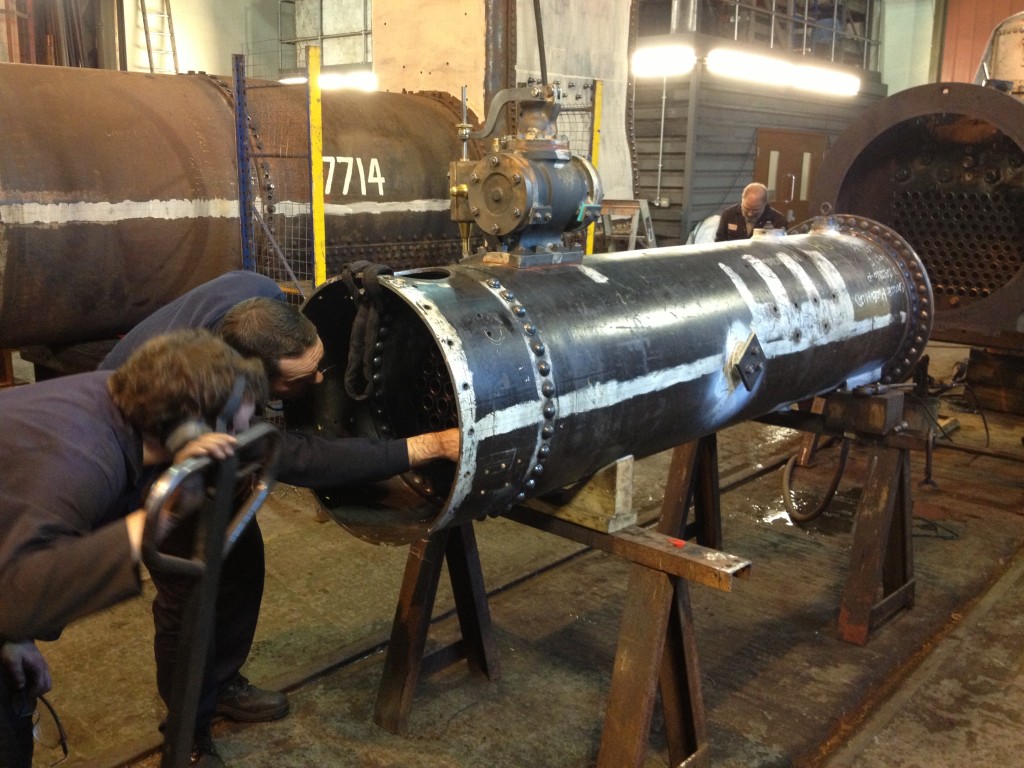