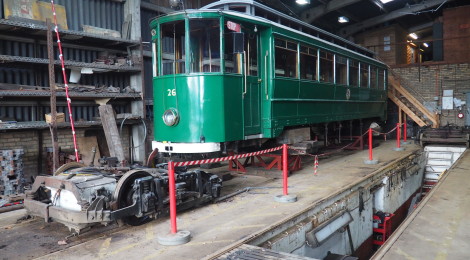 Its been another busy couple of weeks, with lots happening and little opportunity for blogging!  However, here is the usual roundup of news from the last week or so and keep an eye on the blog on Friday morning for some more exciting transport news that we think will be of great interest to readers…!!!

Below: Sheffield 264’s completion is advancing well with the majority of the tram now into gloss.  Do any readers have a good close up image of the original style of numbering as used on the Preston built cars in Sheffield c1918.  When built, a simplified number style was used but I do not know if this was continued post WW1 when the trams were re-trucked and before they were enclosed.  The few images that I have seen suggest there may have been a black shading on the plain gold.  But can anyone confirm this or whether the later full shaded style of numbering (as used on the rest of the fleet) was later applied.  Without any information we will go f0r the plainer style. 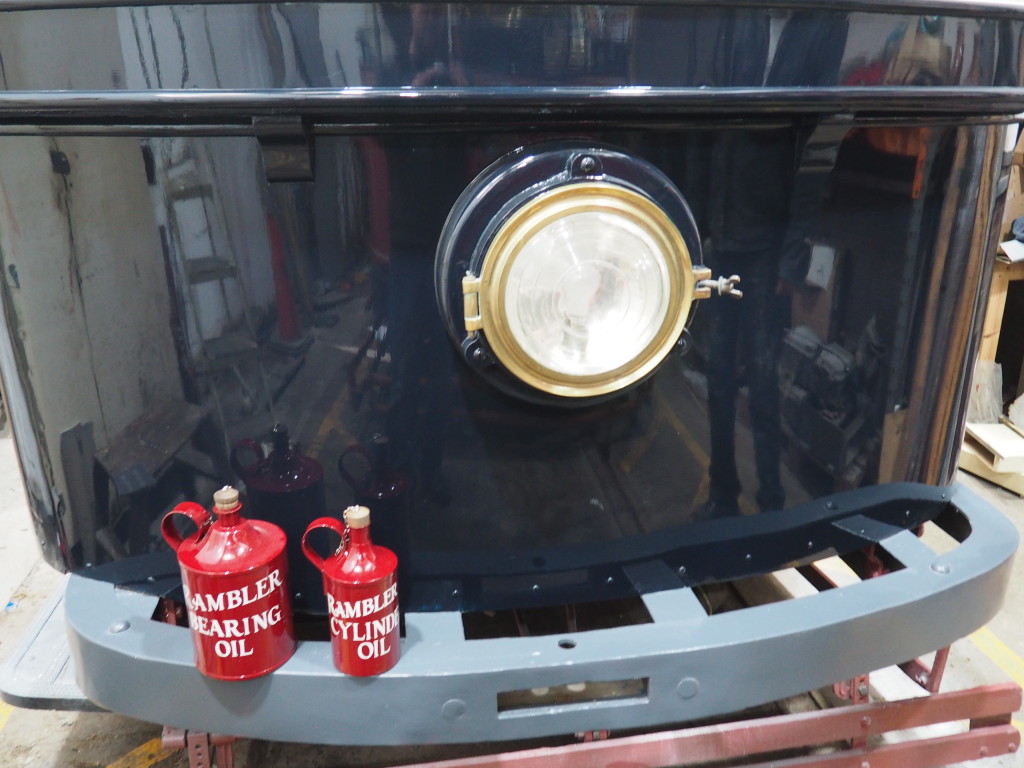 Below: Gateshead 10 has now been lifted for its bogies to be removed. 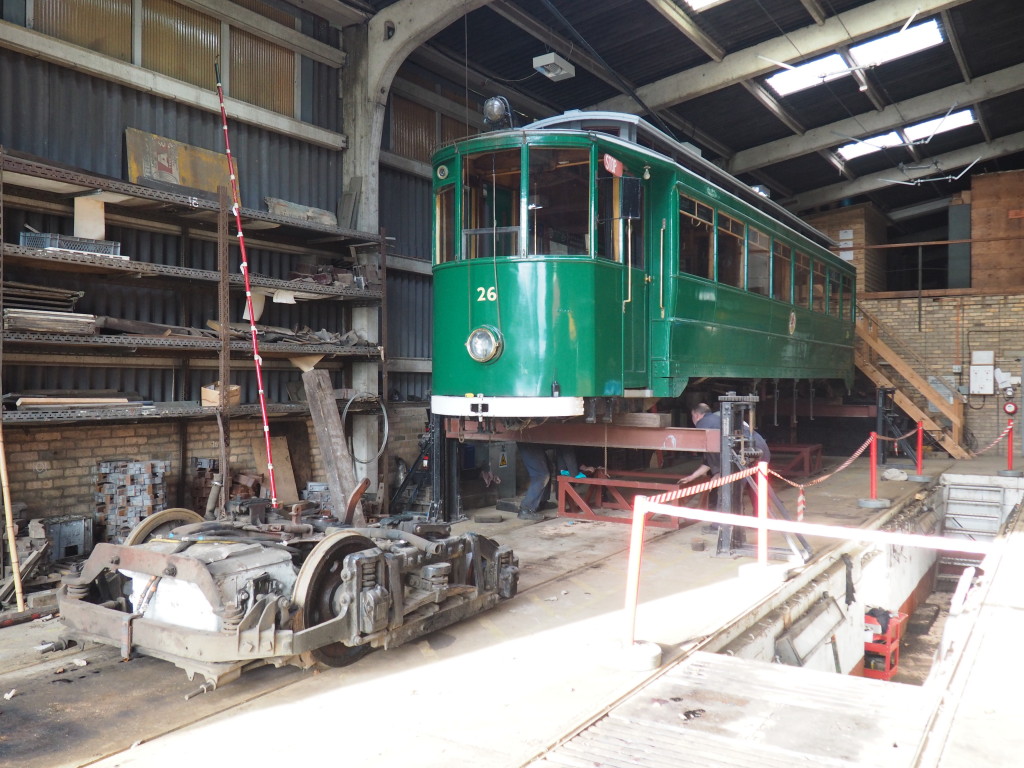 Below: It is seen settled onto accommodation towers to enable work on the body overhaul to begin.  The tyres have arrived in the UK and the wheelsets will be dispatched this spring, the aim being to re-wheel and re-fit the bogies before the tram moves to Road 1 for painting later in the year. 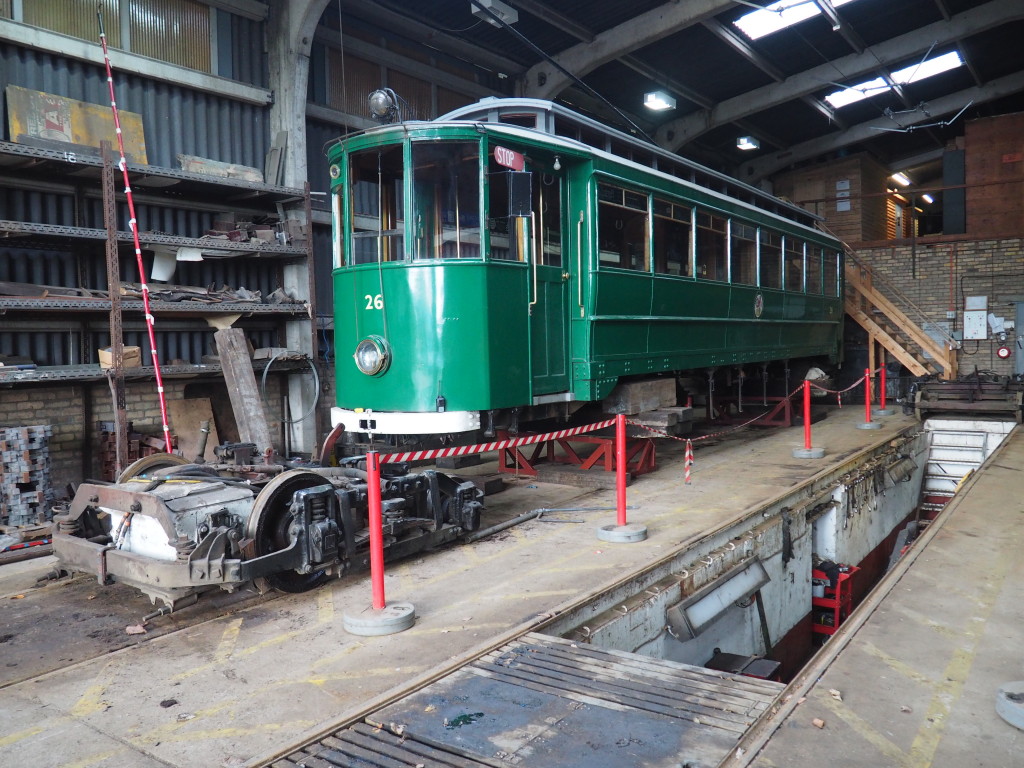 Below: Out in the wind, the track team have started preparation for moving the ‘long shed’ onto an extended siding in order to progress the completion of the triangle on the narrow gauge line – this playing a part in the Great War Steam Fair as the area opposite the Pockerley tram stop is being prepared as a new display area for visitors.  This has also entailed a lot of groundwork and the installation of drainage in the area – all essential but ultimately invisible work. 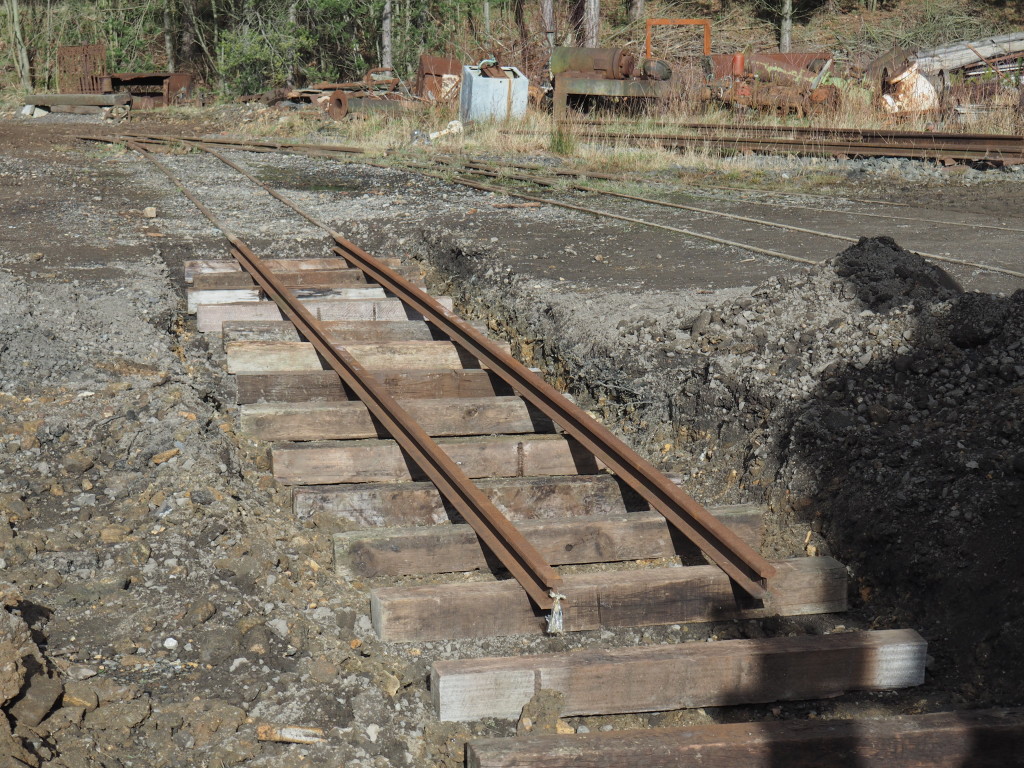 Below: In the RHEC, Tony and Matt B are busy with the reconstruction of the S&D open coach, with its new roof and end structure taking shape at present.  All of the panels have been completed (in solid pine recovered from dismantled church pews) and will be fitted shortly. 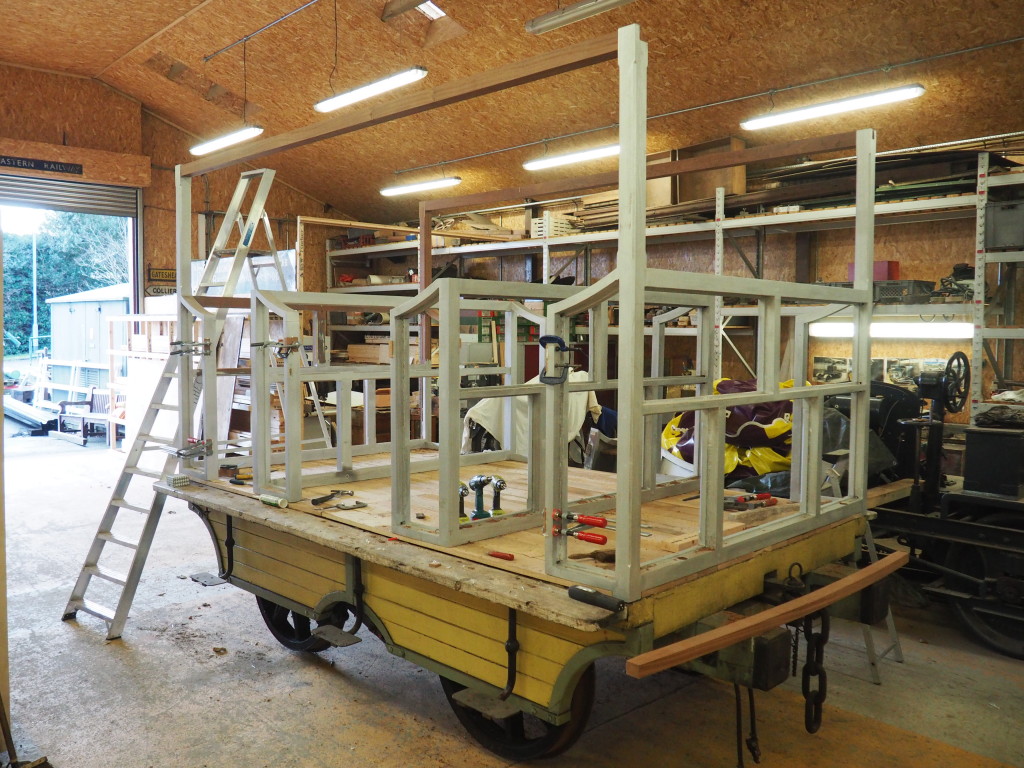 Below: A couple of views showing the roof being assembled – the curve is very shallow and also changes end-end to taper over the end framework.  This will then be canvassed. 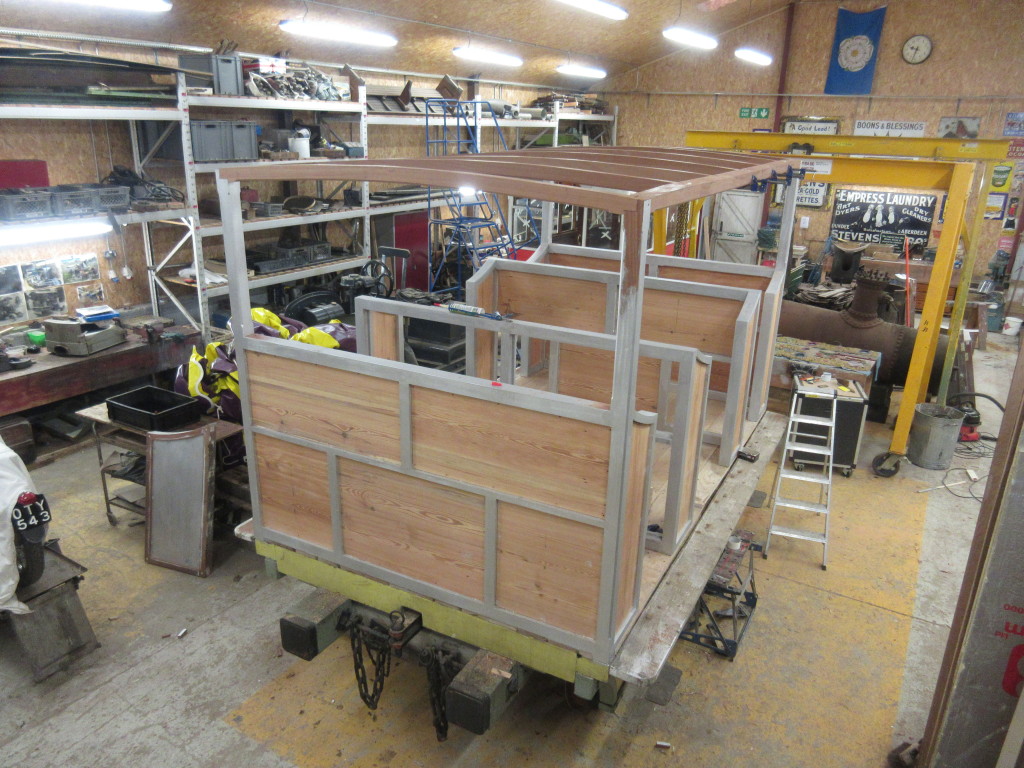 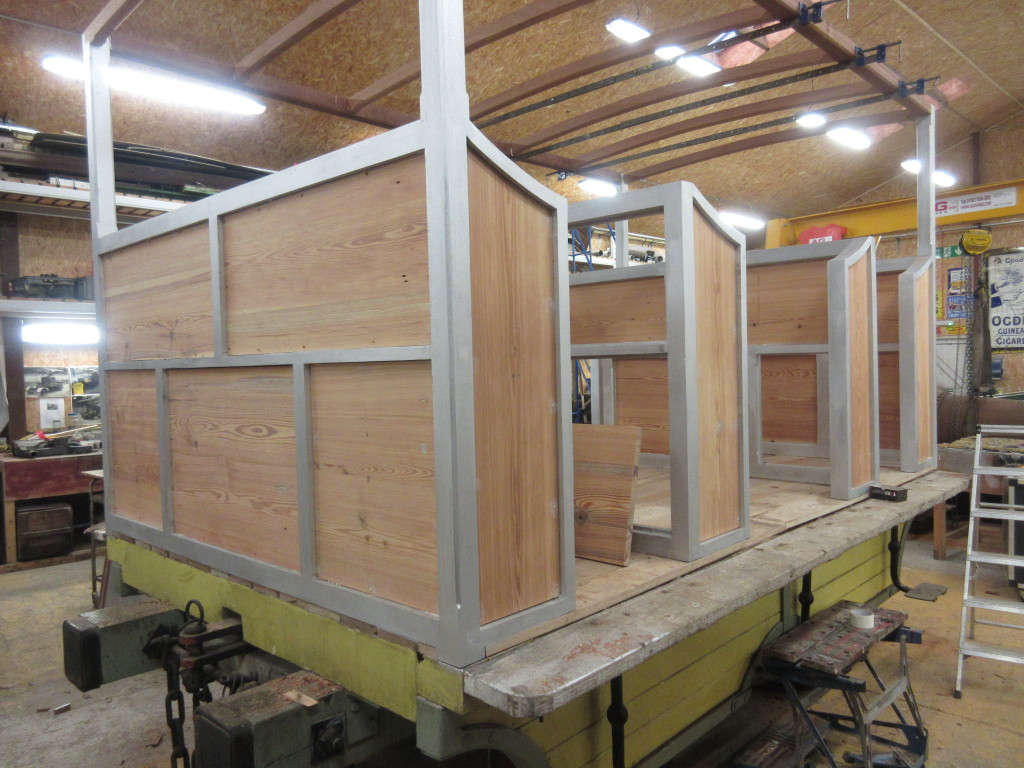 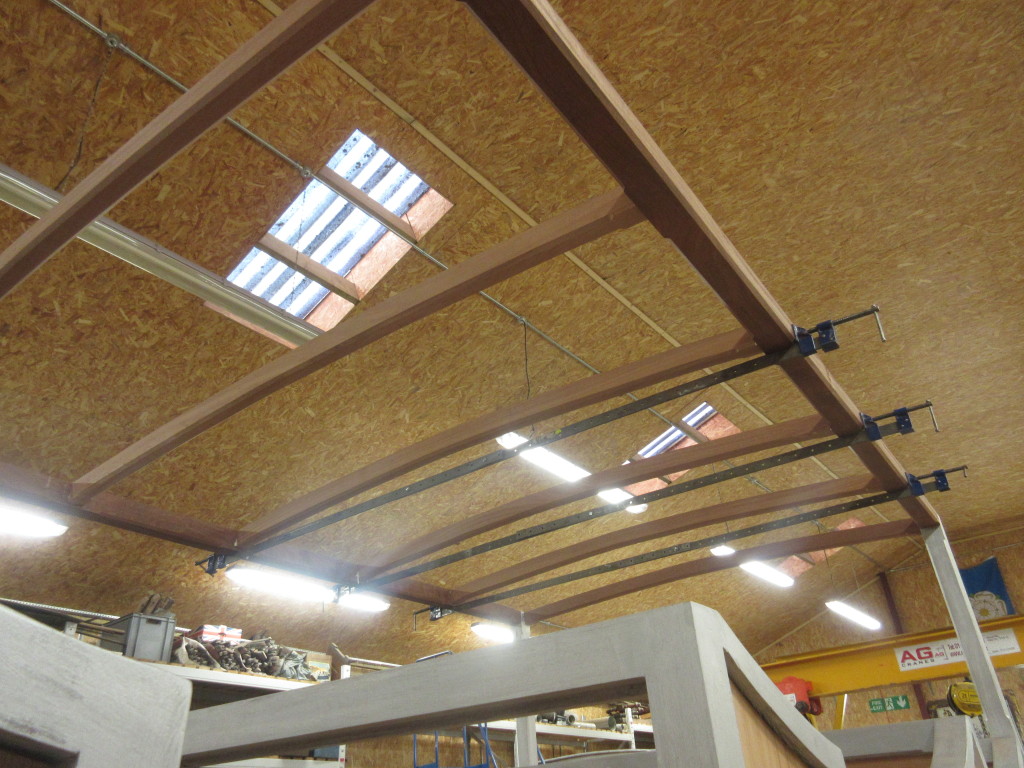 Below: The CAD image (from inventor) drawn by Matt to enable four supporting posts to the original S&D pattern to be machined for us by Dyer Engineering – repetitive work like this being ideally originated in CAD form on such jobs. 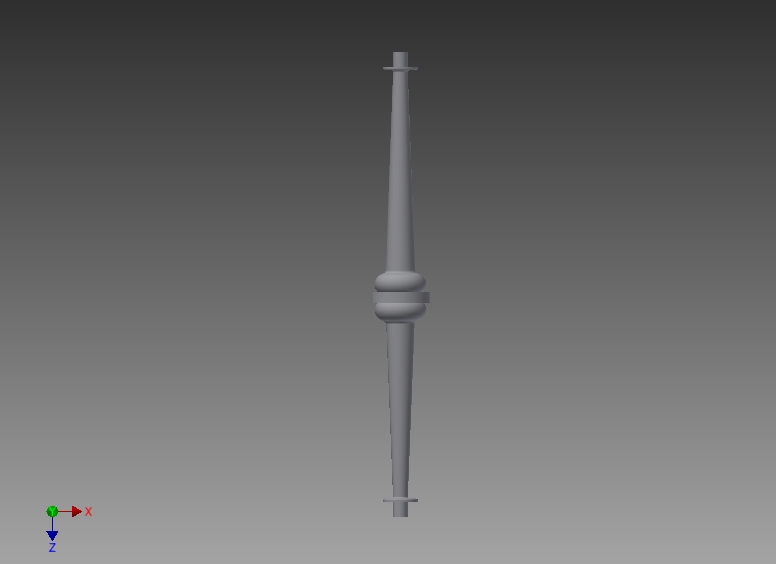 Below: The big RHEC job in recent weeks has been the replacement of the floor on the Access Bus.  This was initially going to be a new floor, but when the old one was removed the supporting structure was distorted and corroded in places so it was decided to insert a kit of parts to create an entirely new supporting structure for both floor and sides.  Chris carried out this work, creating a lattice of structural members which has stiffened the body up enormously.  On top of this, Tony, Matt B and the mid-week volunteers inserted a new floor made of Buffalo Board – the material used on modern buses and which has a sealed surface (one side being textured for grip).  This is also very strong and so the floor of the access bus is now fit for further service and probably better than it ever was! 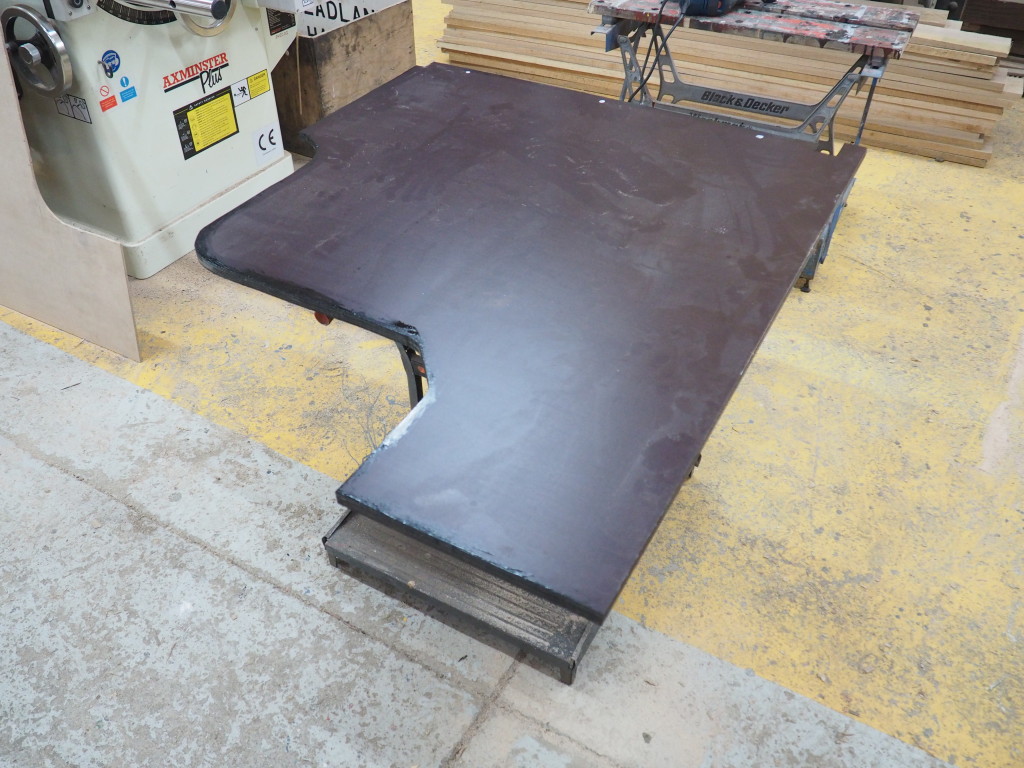 Below: An internal view showing the amount of work required to insert the new floor framework and how much of it there is!  This in turn supports the Buffalo Board surface. 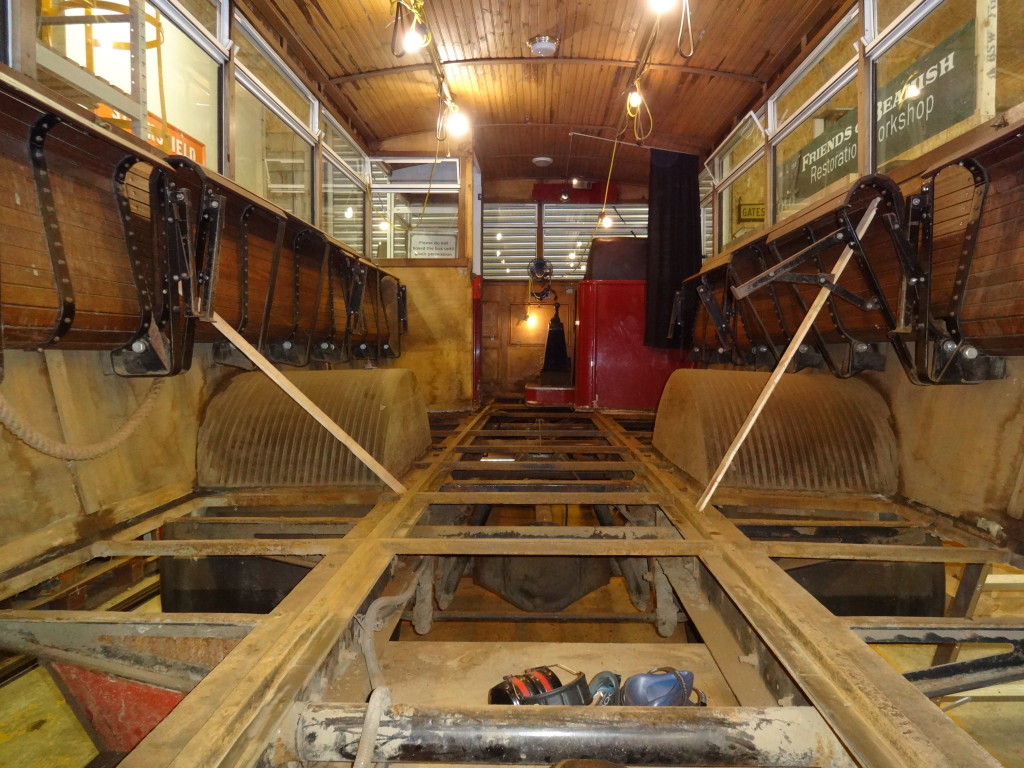 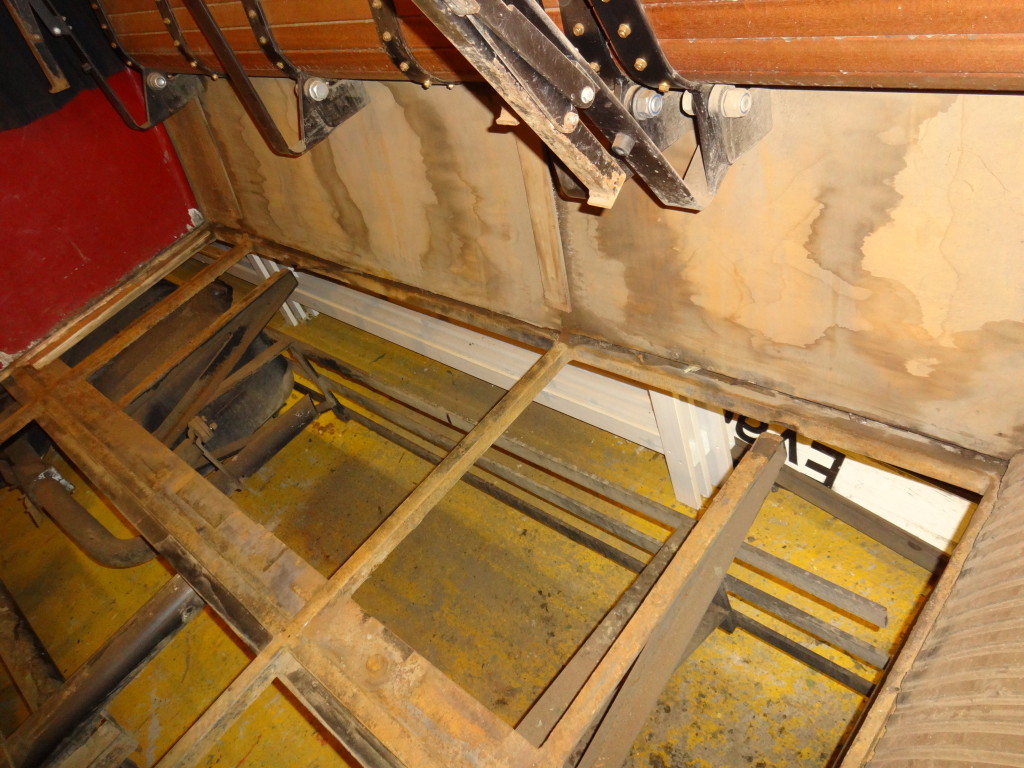 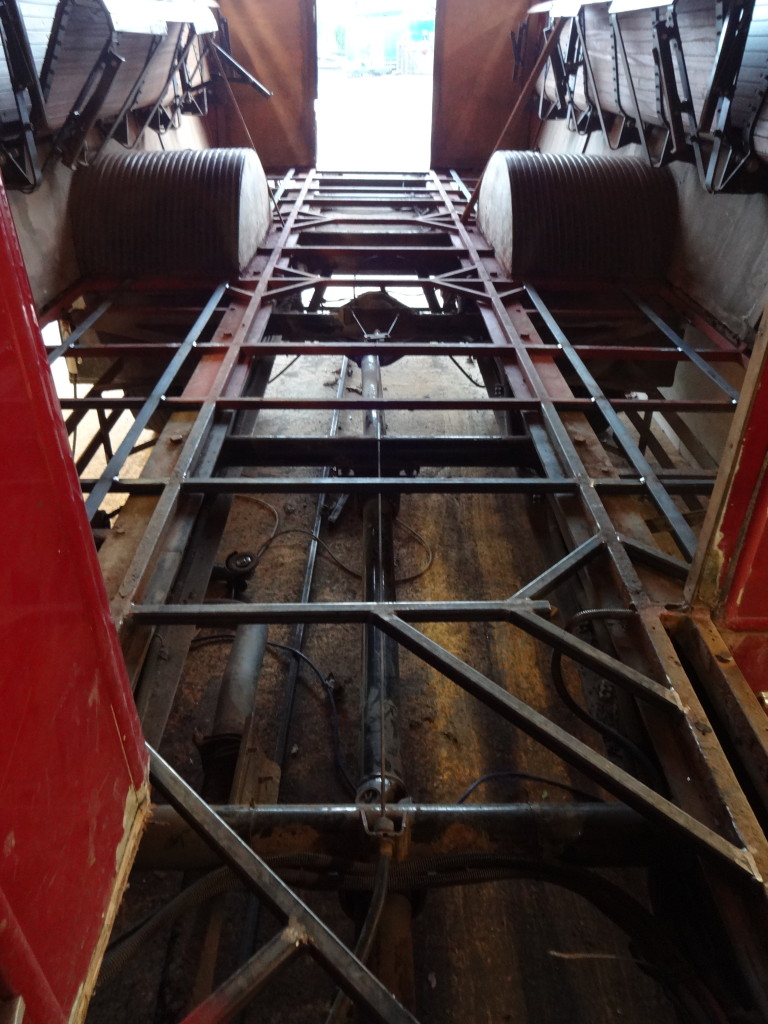 Below: Finally, the James motorcycle now has its tank fitted (complete with a  very smart coat of paint and pinstriping), this project being very near to completion.  The team are now working on the WW1 P&M with an aim of having this ready for the GWSF (Great War Steam Fair) in April. 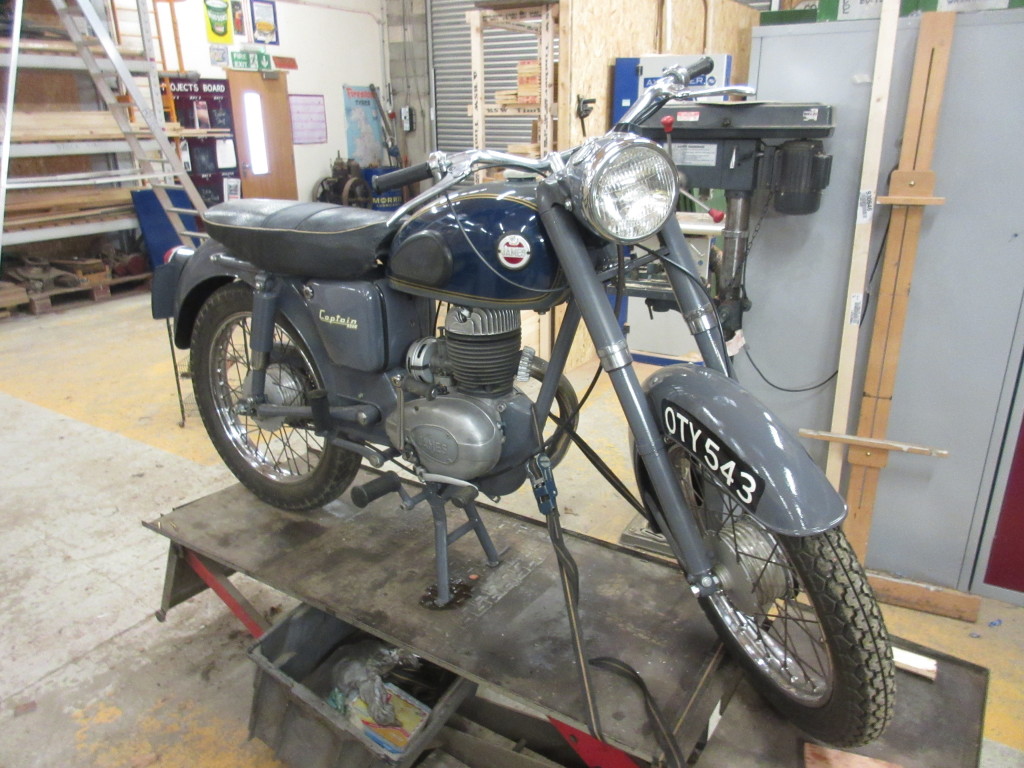 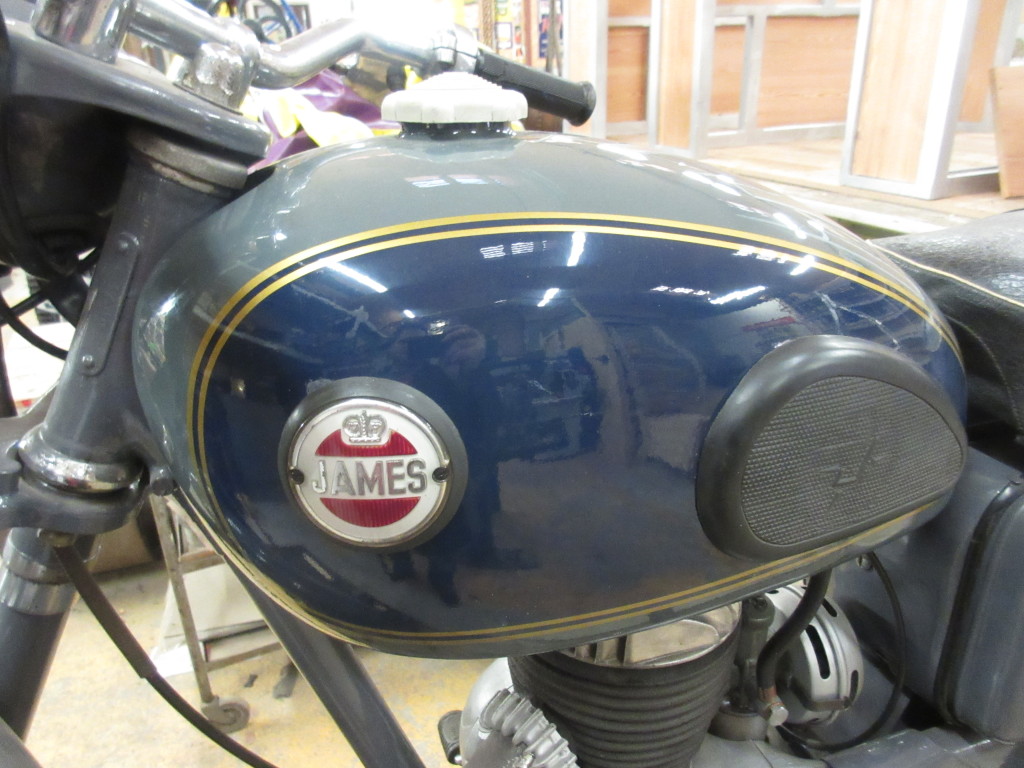