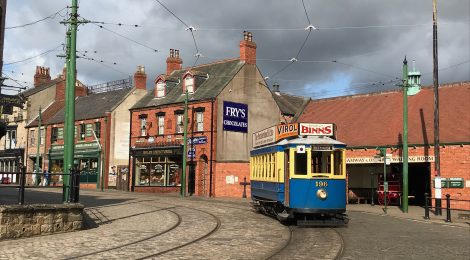 The cover photo above shows what a difference it makes to the site when we reach the end of the school summer holidays!  A quieter site, cooler weather and the smaller trams easily able to manage the demand.

Below: Work on Gateshead 10 us having to fit around other pressures on the workshop.  However, the brake swaybar, the means by which the brake effort from the air cylinder or handbrake is communicated to the bogies and brake cross-beams, has been removed and cleaned – who knew it was blue!  This will be overhauled pending the time it is needed for reassembly. 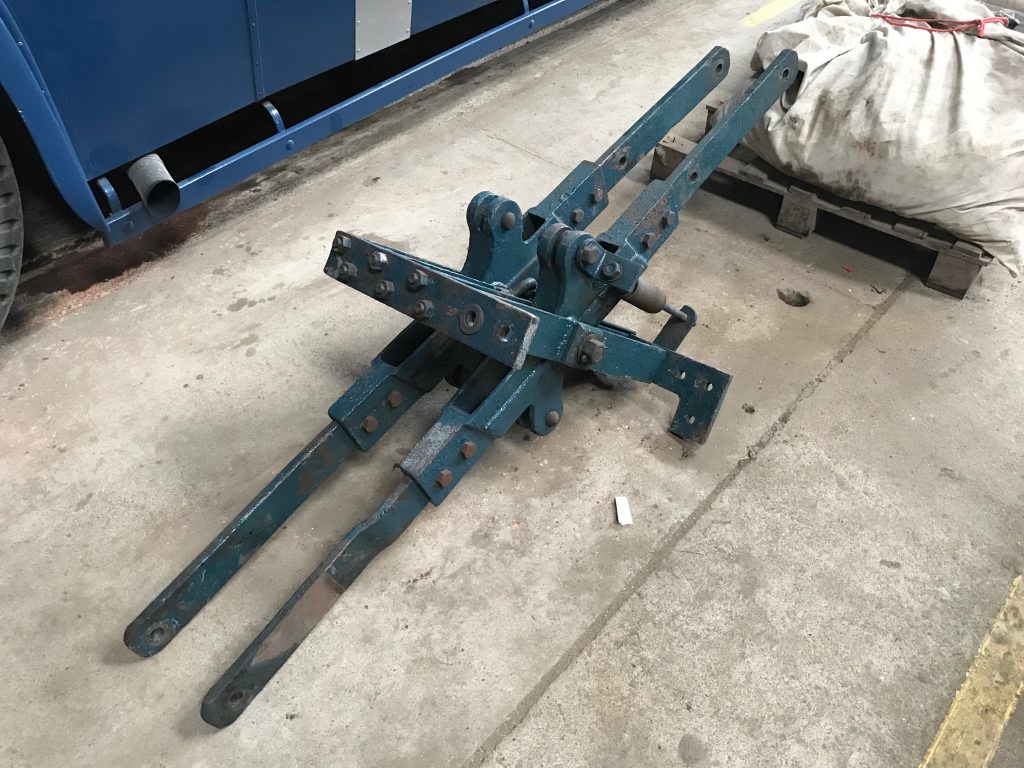 Below: Oporto 65, which has been progressing as a background project, has had the truck thoroughly cleaned and investigated.  It is seen here looking a little less like the barnacled-fossil it previously appeared to be! 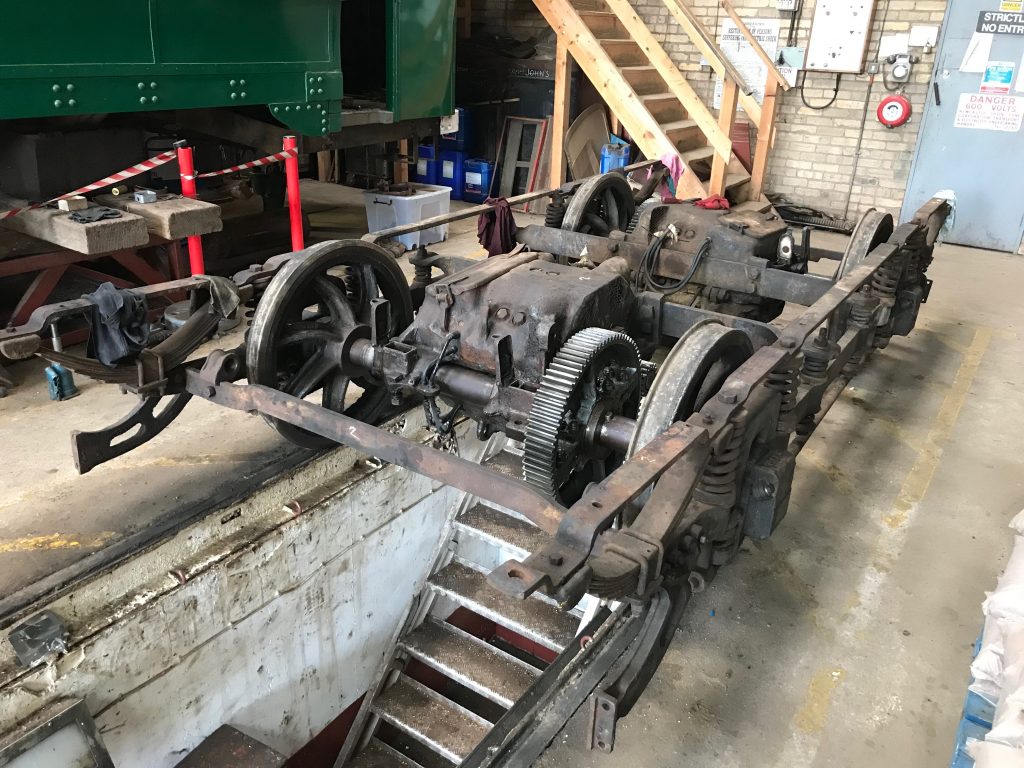 Below: Dave Young has been working on 65, machining a new headlamp lens bezel for the dash panel – old and new being seen here. 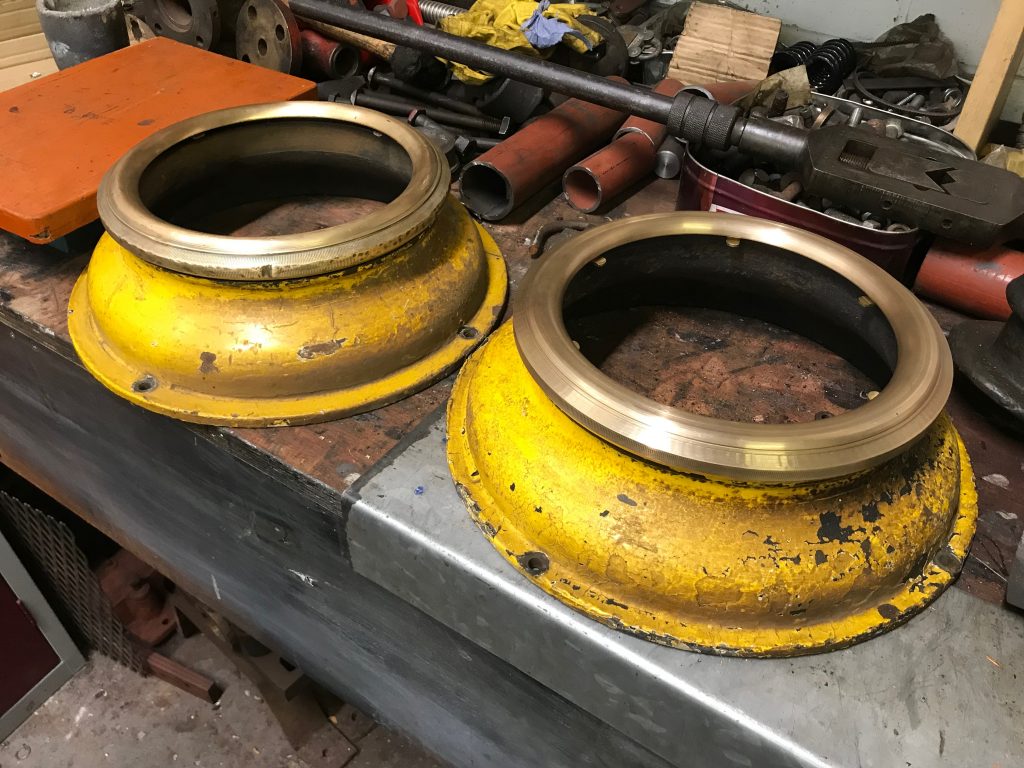 Below: The contractor is into their final month or so of work on the bus depot.  As can be seen here, the roller shutters have been installed, the brickwork will be completed this week and the first-fix electrical installation is well underway.  Plans to complete the concreting have also been made and the first side panels (between the brick columns and including the windows) have been installed.

We have had a very timely donation too – a complete set of ‘Northern’ depot letters!  These will be mounted onto a cream board (so they can be seen!) before this is fitted to the gable end of the building, along with a clock.  Some of the management team from Go North East (one of our sponsors for this project) visited to discuss opening day preparations, so the opportunity was taken to lay the letters out against the backdrop of their future home. 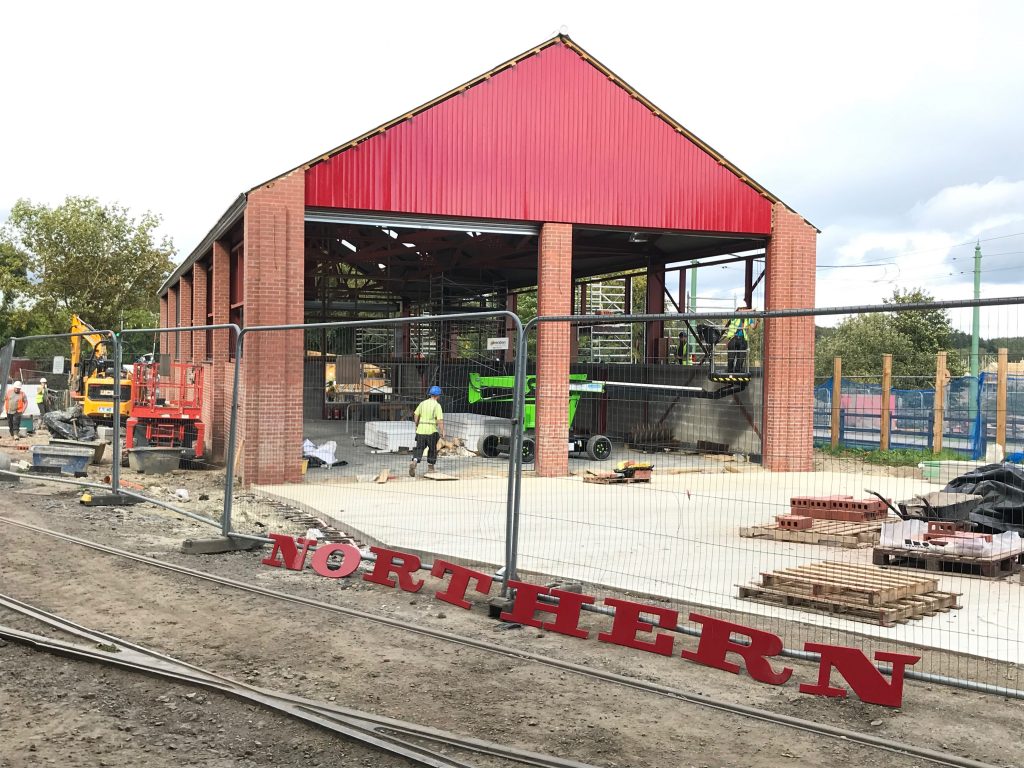 Below: John and his colleagues continue to make excellent progress with this volunteer project – the T now having had a test start-up.  A cab and body style awaits finalising, but will be suitably British (compared to the US cab it was fitted with previously). 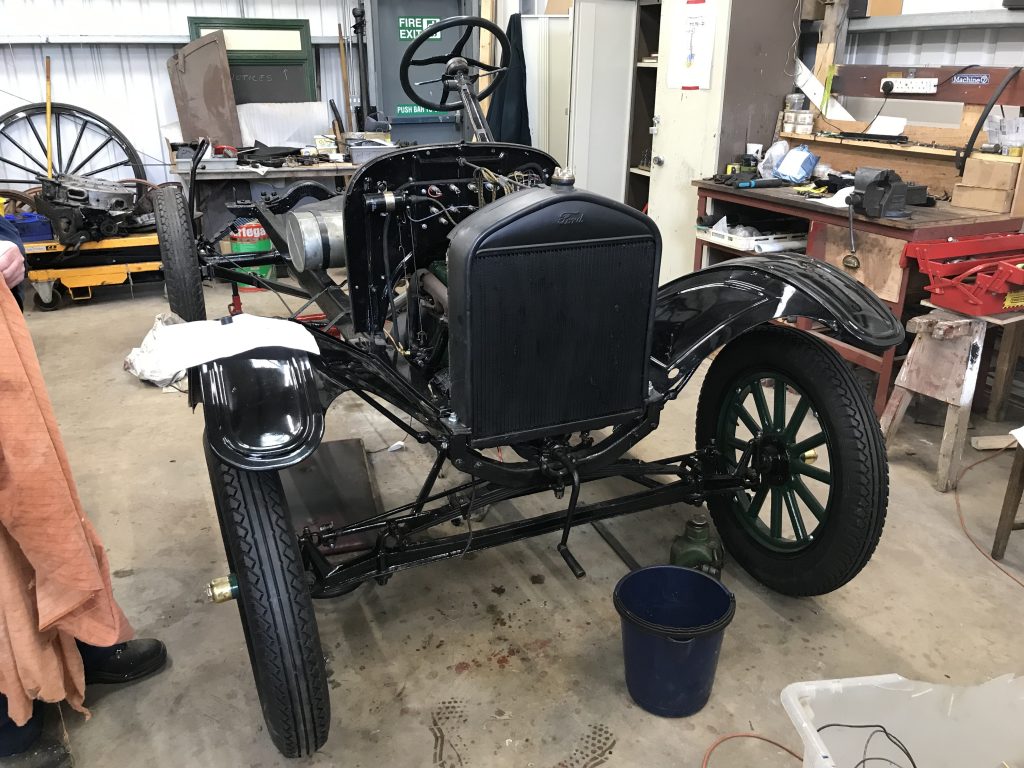 Below: A close-up of the engine – electronic ignition has been fitted to this T, as tested (and found to be excellent) on the Crewe Tractor.  The Tourer will remain in original condition.  The electronic ignition particularly suits the slower speeds at Beamish, which are still better travelled in high gear – removing a lot of the hunting and juddering that went with this style of driving!  With this project so advanced now, thoughts inevitably return to the creation of the railway running gear elements of the Crewe Tractor… 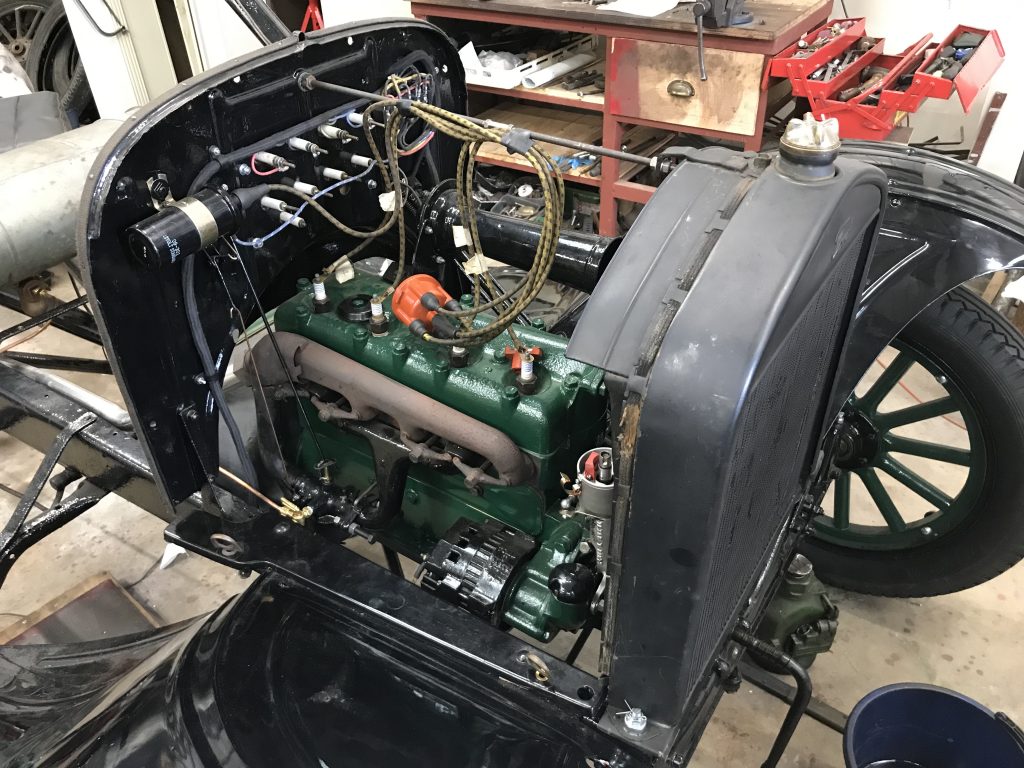 Below: Following a number of complaints regarding the emission of smoke and soot from the Waggonway locomotives, we have produced a poster that reflects the ‘humour’ of the Georgian waggonway, whilst hopefully conveying some information that will be of use to our visitors in educating them as to the charms of steam locomotives!  Meanwhile, work to complete the air brake circuit and fittings on the Brampton coach nears completion and this should enter service fairly soon. 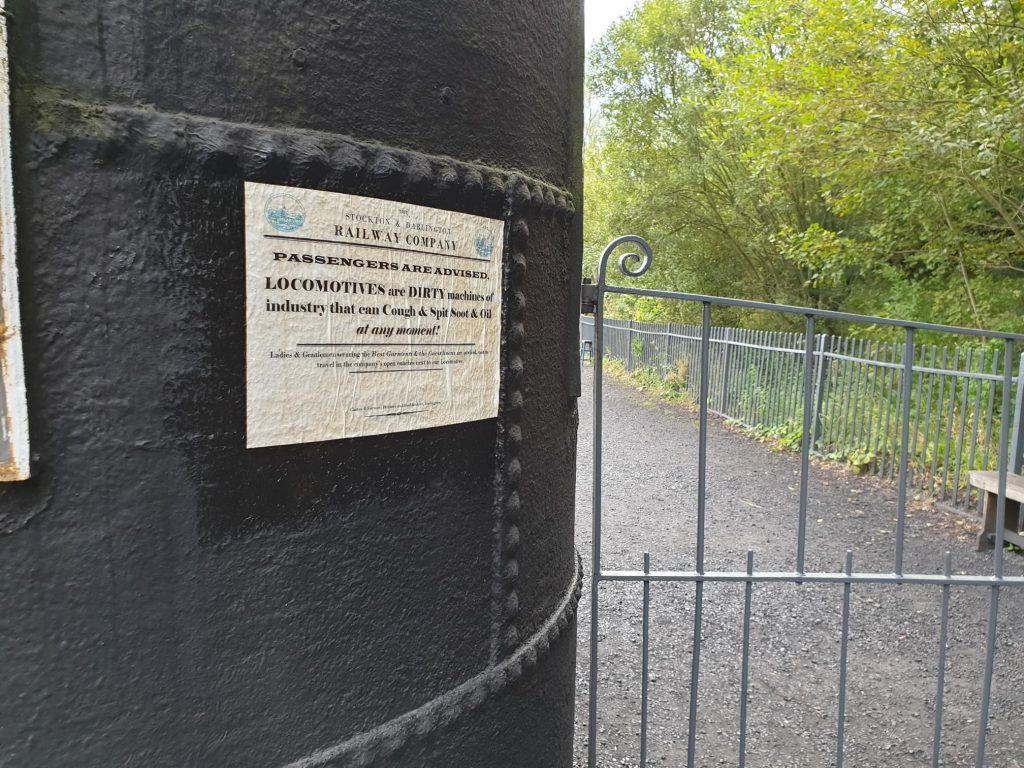 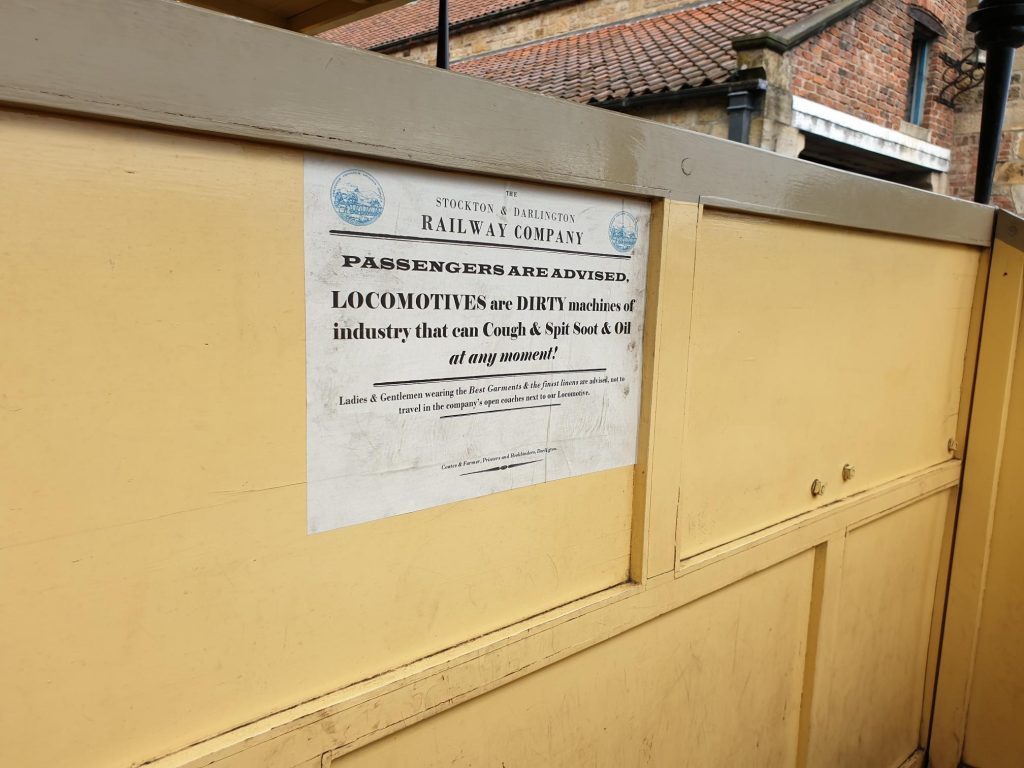 Following a number of comments regarding the incorporation of trolleybuses into our development plans, I have prepared the following for use by our communications teams and those dealing with visitor queries:

At present the museum owns three trolleybuses, two of which are on site.  These being the derelict Keighley 12 and restored Newcastle 501.  Teesside 11 is currently on loan to a group in Stockton to enable it to appear at open days in the locality from time to time.  Newcastle 501 was away from the museum for a number of years in order to give it as wide an audience as possible, where it cannot be operated at Beamish at present.

There have been no further developments with regard to the trolleybuses at Beamish, as the 1950s area and its roads are under construction and will remain so for the next three years.  Once the infrastructure has been completed, then thoughts can return to the potential for future trolleybus operation – including the extensive and expensive infrastructure needed for this.  In the meantime, two motorbuses have been purchased for the collection in order to serve the incremental opening of the 1950s exhibits and also assist with the transport demands across the site (for instance, by operating relief services at the busy start/end of the summer holiday days).

Once the new bus depot is completed in the autumn of 2019, further workshop changes can be made elsewhere in order to enhance the resources available for vehicle restoration and maintenance.  Once this work is complete, we will consider the options for relocating 501 and 11 so that they can be placed on display for visitors to the museum to see.  They will not be kept in the new bus depot, but will be within the tram depot (as the electrical infrastructure there is more suited to their needs).

As readers of the blog will no doubt appreciate, there are many competing demands on resources at present, so the construction of the trolleybus route has been placed towards the back of a long list of elements of the development programme, and also awaits the completion of the 1950s infrastructure and buildings before we can commence a design for it.  Therefore, we have not allocated a timescale to this aspect of the overall programme.  It remains a key aspiration however, and an important element of the future plan for Beamish.

We also have the challenge of maintaining the existing overhead equipment, with a recent concerted effort to overhaul overhead line fittings and components.  We have also spent a considerable sum of money on purchase and shipping of redundant, compatible, equipment from the now-closed Wellington trolleybus system in New Zealand.  This will give us many of the key items needed for the construction of a trolleybus route, as well as the means of maintaining the existing tramway.