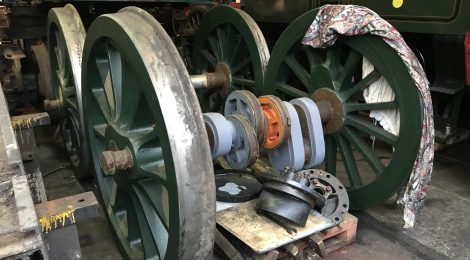 Having featured buses quite extensively in recent weeks, we return, in this post, to matters of steam, with some updates on locomotive projects underway at or on behalf of Beamish…

A reminder that with the new WordPress format, the captions are now below the images!

It has been a little while since Dunrobin’s comprehensive restoration was updated on here, so these notes are intended to serve as an update on progress and look ahead to developments over the next 12 – 16 months on this project.

Of course, the inevitable question arises – when will Dunrobin steam again? At this stage we are cautious about making any commitment to a date, but early 2021 would seem to be realistic based on current progress and maintaining the momentum of work. At the point of launch at Beamish we will have owned the locomotive for nearly ten years – which really does show that these projects can be beset with delays and challenges that cannot be foreseen in the outset. A new cylinder block and new coupled wheels were not in the plan! However, the objective has always been to produce the very highest quality of work and a reliable locomotive that will serve Beamish for many many years to come – and I think we are very much on track for that. Wheels apart, it is also matching its budget projections well, which is something of a comfort!

Having described the work to investigate the condition of the ex Dundee Gas Works 0-4-0WT previously, here are a couple of views showing the strip-down underway to enable the locomotive’s condition to be assessed with a view to possible restoration to working order.

This winter Samson is receiving some modifications… Recently the slide valve was investigated to see if it could be part of the reluctance to start (as a single cylinder locomotive this is important!) and also apparent lack of power. Following some measurement at the suggestion of a number of traction engine operators who encountered Samson in Kent during its visit to the Richmond Light Railway, it was decided to shorten the valve by 1/16″ at each end – the result has transformed Samson into a much stronger locomotive and one far happier to set off without the previous centring problems.

The locomotive has been placed onto the flat waggon within the Colliery Engine Works for display this winter (and for its annual boiler exam). Whilst here, some other work is being carried out in light of operating experience. One element, given the new power available, is increasing the weight at the front end. We are going to have a cast buffer-beam with projecting buffing face, to better recreate that fitted to the original Samson and also to add substantial weight to keep the front end down. The additional power has increased the tendency to rear up when starting, as well as for the locomotive to slip (it was never powerful enough to achieve this previously!). The rear bufferbeam will also be modified, along with the tender drawbar arrangement to make a more satisfactory arrangement for propelling loads in reverse.

Additionally I am planning to complete the white lining on the front boiler band – one of those jobs that never quite got finished! It will also make Samson 2.0 more readily identifiable! We also hope to improve the blower arrangement to create a more efficient design. It is anticipated that Samson will see more use in coming years, and it really has to be a more capable performer in the hands of a wider variety of crews, whence the continued resolve to develop and refine the locomotive’s performance.

As well as overhaul work, this time of year sees an intensive effort to prepare the working locomotive fleet for annual boiler examination. This firstly entails stripping the fittings required to grant access for internal examination. The firebars/ashpans will be removed and the locomotives are also cleaned. Once the boiler inspector has made a cold examination, he will return once the boilers have been reassembled to witness them in steam. Upon completion of that test, the new period of insurance commences again and runs for 14 months. We actually work to a 12 month inspection so as to avoid engines being out of service during the summer months.

From the Machine Shop…

A recent and very exciting arrival at Beamish has been a consignment of overhead electrical equipment (OLE) from New Zealand. We have taken this opportunity to increase our spares stocks as we probably won’t get such a good opportunity again and were very fortunate that upon closure of the Wellington Trolleybus system on the North Island in 2017 a lot of equipment was made available to the Wellington Tramway Museum. Not requiring it all for their own purposes they made a list available globally, to all interested parties, from which we were able to select a quantity of suitable spares and items for future development. We are enormously grateful to the WTM for sharing their ‘bounty’ and in particular to Allan Neilson there, who took so much trouble to arrange the purchase and packaging of our equipment.