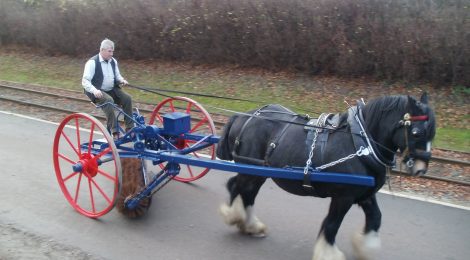 In this post I’m taking a look at a theme that began to develop ten or so years ago, as the idea of building a council/maintenance depot took hold. We later built the depot (home to the steam roller and a recreated workshop), and some of the implements described here are now resident in that area. There are also one or two still to restore. The idea was to build a collection of items, which otherwise had little context in the museum, and place them together with a theme or sense of purpose. To this end the idea of Beamish Rural District Council was generated – we don’t usually put ‘Beamish’ onto the artefacts, but where their provenance is unknown or obscure, it enabled them to be brought into the museum story and find a ‘home’ within it.

The work began with a project to restore a farm water cart, whose tank appeared to be of First World War origin and which had been adapted from horse to tractor haulage. This work was carried out in the small workshop area within the Regional Museum Store, and was funded by the Renaissance in the Regions scheme (which employed one member of staff). This was the precursor to us establishing the Regional Heritage Engineering Centre later on, and gave the museum some valuable experience in this type of work (albeit with different staff, myself apart).

The Friends of Beamish, of course, had been carrying out restoration work for decades (five of them now!) in their own workshop. There was some crossover between their work and the museum’s, though this was not really developed until the RHEC opened and we were able to appoint a member of staff to run it. Now the museum and the FoB work hand in hand on projects, developing the work we see here and also the Hodbarrow side tipper in the previous post.

Apologises for some of the image quality here – I am limited in what I can access at present and some images have the old watermark that was insisted upon in the past – initially I couldn’t access the blog, having to submit my notes for adding by another team. Moving to the WordPress format and being able to access the site directly unlocked the blog’s potential and sparked the regular posting (rather than once a month or so) that I hope readers enjoy today!

There is a trade catalogue for Ames-Crosta on the blog, which usefully explains the use of rotary brooms for sweeping streets: http://beamishtransportonline.co.uk/wp-content/uploads/2012/11/Ames-Crosta-Sanitary-Engineering-Co.pdf