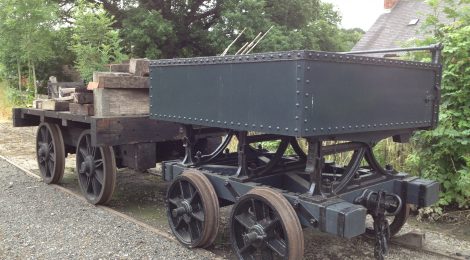 With the aim of finding some things to talk about during what is likely to be a slow spring for us all, I thought I’d start an intermittent series looking back at some of the projects we’ve carried out that perhaps don’t always get the spotlight shone upon them, or which are deeply rooted as ‘favourite’ projects carried out. So we start here with a waggon that was restored as part of a mixed strategy to see it return to use – recreating a working object that is absolutely ‘typical’ but which will never grab the cover story or headlines anywhere (other than on this blog!).

The Hodbarrow side tipper was one of a pair of waggons (the other being a wooden MSC type tipper) and a waggon turntable that were purchased from West Coast Trains at Carnforth in May 2008.

I have a weakness for contractors waggons and have been accumulating components from a variety of sources over the last 15 years or so. Hopefully one day we can restore a pair of the side tipping wooden MSC waggons, and maybe replicate an end tipper as well – an essential part of railway history, not currently represented anywhere. These were the wheelbarrows or dump trucks of their age and their cheap construction, despite great numbers, meant that little survived outside a few industrial applications – as in the case of Hodbarrow.

I was therefore keen to represent the side tipping waggons in the working collection at Beamish, and the iron bodied waggon seemed to offer the best chance of achieving this in a reasonable amount of time and for a reasonable cost, financially.

You can read more about the mining operation in Cumbria here: https://co-curate.ncl.ac.uk/hodbarrow-iron-ore-mines/

← SHDC No.17 – A history and review…
Beamish Transport Objects in Focus… Number 2 →