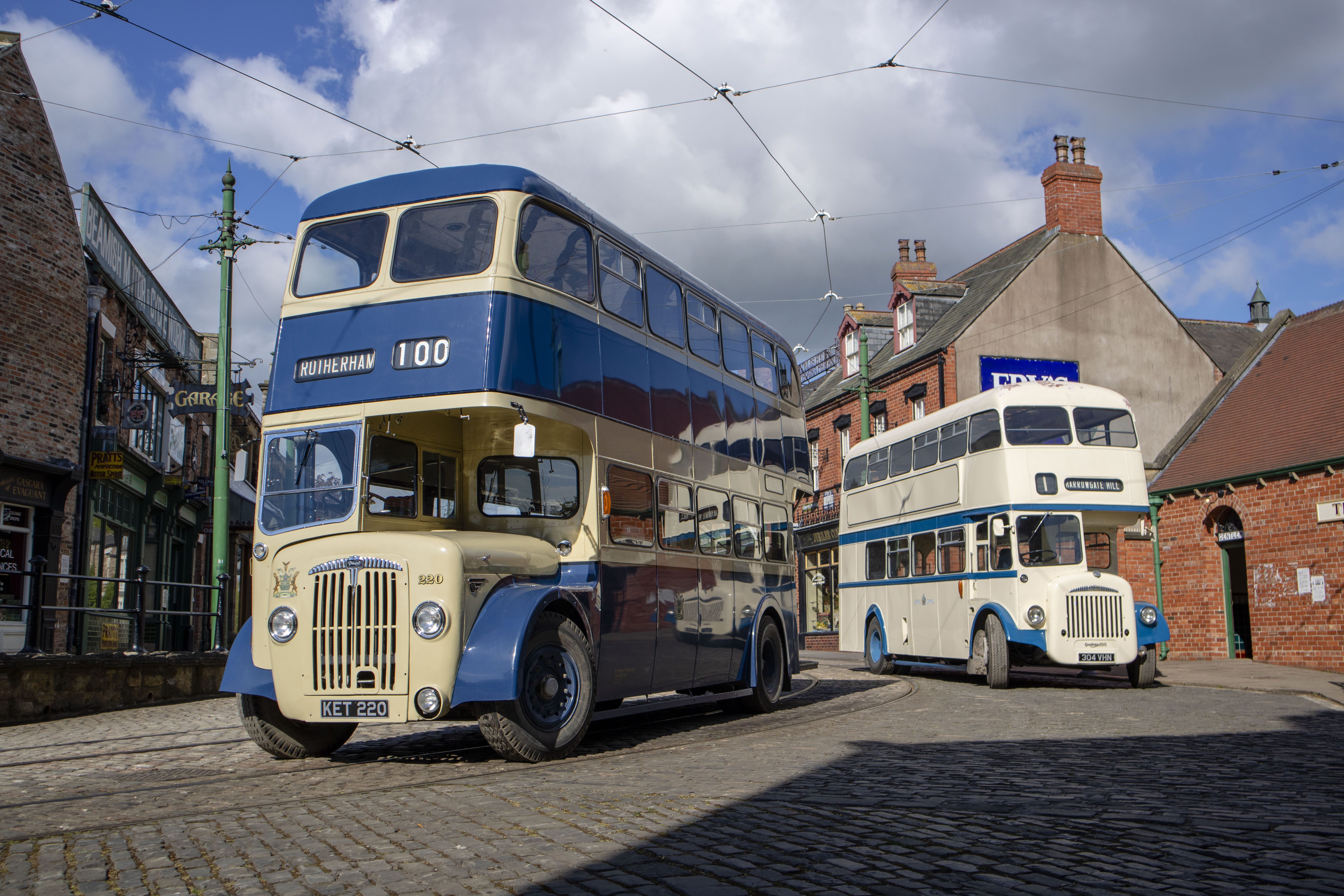 The Motor Buses at Beamish Museum

In 1987 Beamish introduced its first dedicated bus service for visitors to the Museum’s extensive site, connecting Pit Hill (the Colliery village) which was remote from the site’s tramway, with the wider Museum.  The success of this service, and expectation of it being both reliable and regular caused the hire in the early 2000s of a second replica vehicle, and these two buses settled down to a regular pattern of operation, being joined in 2007 by the new-build (though with some traditional features) Wheelchair Accessible Bus.

The plans for the Remaking Beamish development include a 1950s bus route, substantially increasing transport capacity.  Initially to be operated by motorbuses, the plan allows for the introduction of electric trolleybuses on the same route in the future.  The purchase of Rotherham 220 opened our eyes to the advantages of running high-capacity period vehicles on the transport circuit and this led to the further purchase of Darlington 4.

The Wheelchair Accessible Vehicle (WAV) J2007 quickly became a victim of its own success and in 2014 the project to create a second WAV commenced.  This reached its conclusion in 2020, and a third WAV’s restoration and adaptation will start later this year.

Supporting the core working fleet are a number of historic vehicles, which have been, or are being, restored to working condition in order to demonstrate to visitors additional aspects of historic passenger transport in the north east.

In 2019 the museum’s dedicated motorbus depot and vintage vehicle workshop were opened and already this amazing facility has transformed the maintenance and operational team’s ability to ensure that the vehicles needed for the varied service patterns, are available.  The transport news section of this magazine has increasingly referred to various motorbus projects and plans, so here is an overview of the motorbus fleet and our plans for its maintenance and operation in the coming years.

In 1987 a replica of 1913 Daimler CC motorbus J2503 was delivered to the Museum from its builders.  It was based on one of at least fifteen vehicles supplied to the Gateshead & District Tramways and purchased to extend the Gateshead Tramway network of routes beyond their terminals, in particular at Low Fell.  The extension of this route to Chester-Le-Street was a significant as it shortly led to the establishment of the Northern General Transport Company (NGT) in 1913, who took over the bus operations as a separate subsidiary of the parent company, the British Electric Traction Company.  J2503 initially carried the 1913 livery, being overhauled and turned out in NGT livery in 2012, ahead of the NGT centenary the following year.

In 2004 a second replica bus was added to the fleet.  Initially on hire, DET 720D was later purchased by the Museum to secure its availability for operation on site.  It carries the number B1349 and is one of three buses built by Farrar of Fraddon, using Bedford VAM chassis which in the case of B1349 it was a shortened VAM14 chassis, originally fitted with Duple coachwork and new to Riley of Rotherham in 1966 and converted in 1990.

The B-Type now carries the 1920s Newcastle Corporation Transport Saxe Blue and Ivory livery.  Though NCT didn’t operate B-Types, they did have similar vehicles and the livery was chosen for B1349 to better reflect its present working life in the north east.

The arrival of the Daimlers

When the museum announced its plans to develop exhibits set in the 1950s, numerous approaches were made regarding transport items from the period.  One of these, in 2015, was from a bus restorer who had rebuilt a 1954 Daimler CVG6, ex Rotherham 220.  This was initially placed on loan to the museum, before purchase was later completed.  With its high-capacity and ease of loading/unloading, the bus was initially used sparingly to support events and peak periods.  Being able to lap the site twice as fast as a tramcar was a great advantage and by 2018 the bus was in regular use on a new 1950s circular bus route following the Tramway.

The success of 220 in service led to the purchase of another Daimler, this time it was a 1964 CVG5, which was new to Darlington Corporation as their fleet number 4.  The bodywork was built by Charles Roe of Leeds and the bus had been used as a working heritage vehicle prior to joining the Beamish collection.

In the early 2000s the need for a wheelchair accessible bus on site was recognised.  The result was J2007, completed in 2007 by Severn Lamb and which immediately proved its value to visitors. As a result the bus has been intensively used at Beamish and in July 2017 it was repainted into the sparkling yellow and crimson Venture livery (a local operator) as part of ongoing maintenance and life-extension work that this bus in particular is subject to.

The purchase (in 2014) and subsequent restoration and adaptation of Crosville 716, a 1933 Leyland Cub with Brush body, has been well documented in these pages.  Purchased in derelict condition, the lengthy project to create a second WAV for the Museum is expected to join the collection in 2021.

A second Leyland Cub, this time built in 1939 with a Roe body on a KPZ2 chassis and supplied to the West Riding Automobile Co. Ltd. as their fleet number 560, was purchased as part of the gathering of Cub-related spares to ensure longevity in service of these vehicles at Beamish.  Mechanical restoration of 560 should commence in 2020/21. Read more about this bus here: http://beamishtransportonline.co.uk/2015/01/ti-news-week-4-2015/

The local privateer and the mighty Northern General Transport Company

In 1929, Mr G Baty of Rookhope, Co Durham, was operating a 14 seat bus, built by Robsons of Blackhill on a Chevrolet chassis.  In 1931 a new chassis, this time a Dodge rated at 1.5 tons was substituted and the bus was licenced by Durham County Council solely for working the narrow lanes around Rookhope to meet buses running on the valley road.  This curtailed the roaming around the Durham Dales of VK 5401, usually in connection with market days in the locality.  Out of use by 1951, the bus was later preserved by the VK Club and began a long association with Beamish, which after many years resulted in it joining the collection in 1995.  After many years in storage, the bus is now in the workshops for assessment and restoration to operating condition in order to represent the small private bus operators in the region.

The 1928 Northern SOS bus is one of 65 QL type vehicles supplied to NGT by BMMOC for operation across their network.  It was in use until 1949, being retired from Consett depot and sold on for use as a caravan at Bardon Mill.  In the early 1970s it was rescued for the Beamish collection, an extensive and lengthy restoration being undertaken (including a virtually new body) to restore the bus to its present stunning condition.  In 2019 it was ‘cloned’ by Go-North East, providing an eye catching identity for one of their refurbished Optare Versa buses.

In addition to the buses, the Museum also operates a replica Armstrong Whitworth limousine, which due to its seating capacity is regarded as a Passenger Carrying Vehicle for operational purposes.

Other buses have passed through Beamish’s hands over the years.  These included a 1948 Newcastle Corporation Leyland Titan PD2/1, LVK 123; NGT SE6/LSE4 No.604 which joined the collection in 1967 (prior to the site being opened at Beamish) from the BTC Museum at Clapham; a 1934 NGOC SOS (CN 4740) recovered in 1972 following 22 years use as a caravan in Ellington ( http://www.nebpt.co.uk/index.asp?pg=38 ) and I believe that 1949 Bristol Bristol L5G LHN 860 (ex United, but also allocated to their subsidiary, Bell’s Services of Westerhope) had some connection with Beamish after being preserved in 1968. It is recalled that it was donated to the museum following use as a staff bus, arriving in non-operational condition. I received some attention but work was abandoned. It later joined the Aycliffe & District Bus Preservation Society collection – though when and how I am not at present sure. I will endeavour to find out and update this page accordingly. A photo of this bus appears in the gallery section below.

A new edition of ‘Forty Years of Service – The Beamish Museum Tramway 1973 – 2013’ is currently being written, which will both be re-titled and expanded, to include the motorbus fleet and other passenger carrying vehicles.

Follow the bus restorations thread on this blog here: http://beamishtransportonline.co.uk/category/bus-restorations/

Over the years there have been numerous visiting buses to the museum site, sometimes for events, sometimes for promotions. http://beamishtransportonline.co.uk/2018/03/ti-news-7-2018-updated/