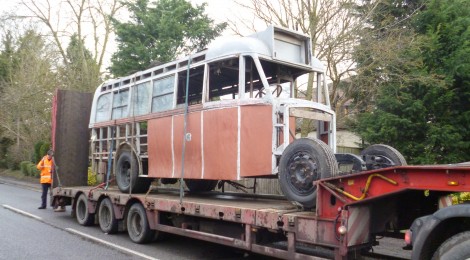 Covering the period up to and including Saturday 31st 2015

Below: This week we collected our second Leyland Cub, HL9621, from a location in Oxfordshire where it has been stored since being saved from a museum disposal in West Yorkshire.  As commented on this blog previously:

This is former West Riding Cub Reg HL 9621, fitted with an oil (diesel) engine and a Roe 24 seat body.  It was latterly preserved by the West Yorkshire Transport Trust at Bradford Bus Museum, where the colour views of it show the partly restored bus being collected by a new owner who removed it for restoration.  They recently contacted us regarding its sale to Beamish, and this opportunity to store a second bus for use in our HLF funded ‘Remaking Beamish’ project (as a second accessible bus) plus the spares that would be invaluable in 716′s restoration, meant that we were very keen to obtain it. 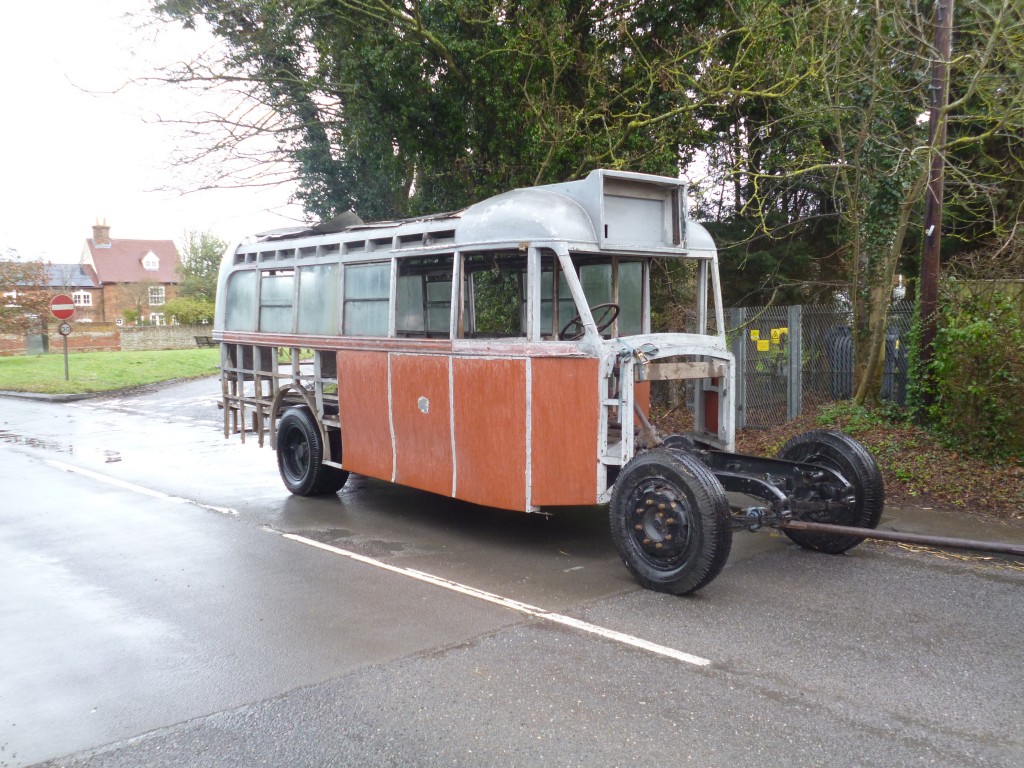 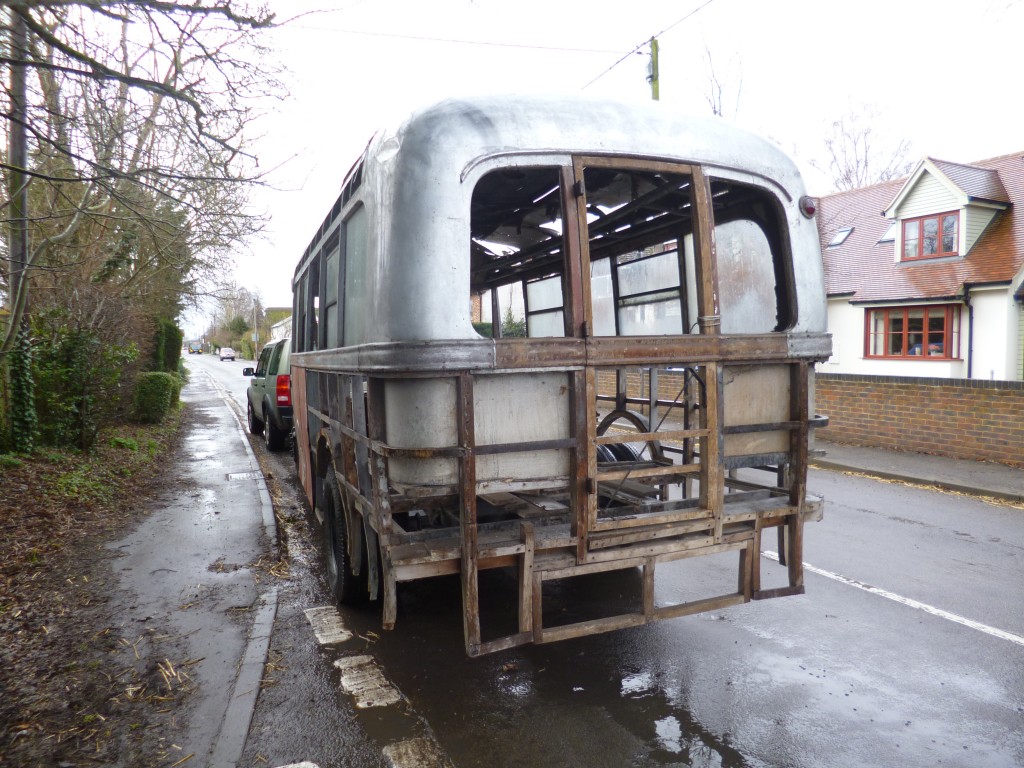 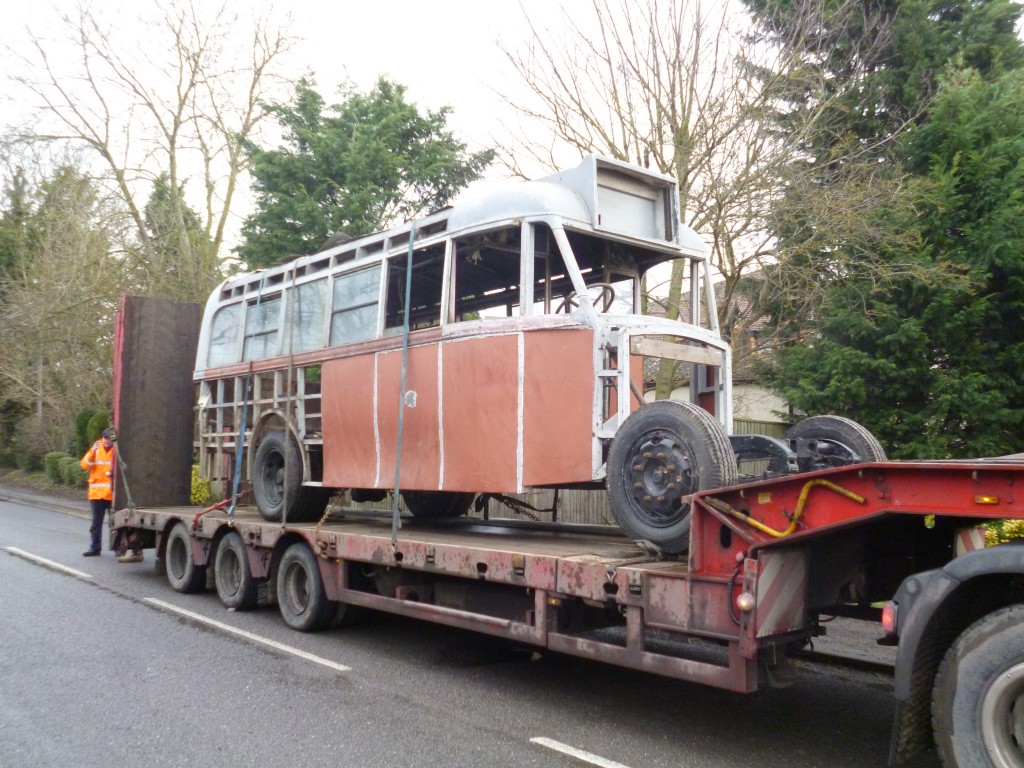 Below: Back at Beamish and safely placed into store.  It is replete with the components that can be seen to be missing, not least the oil engine (originally fitted with a petrol unit) and gearbox.  The chassis was actually from a forward control Cub, the original being in poor condition and swapped over many years ago. 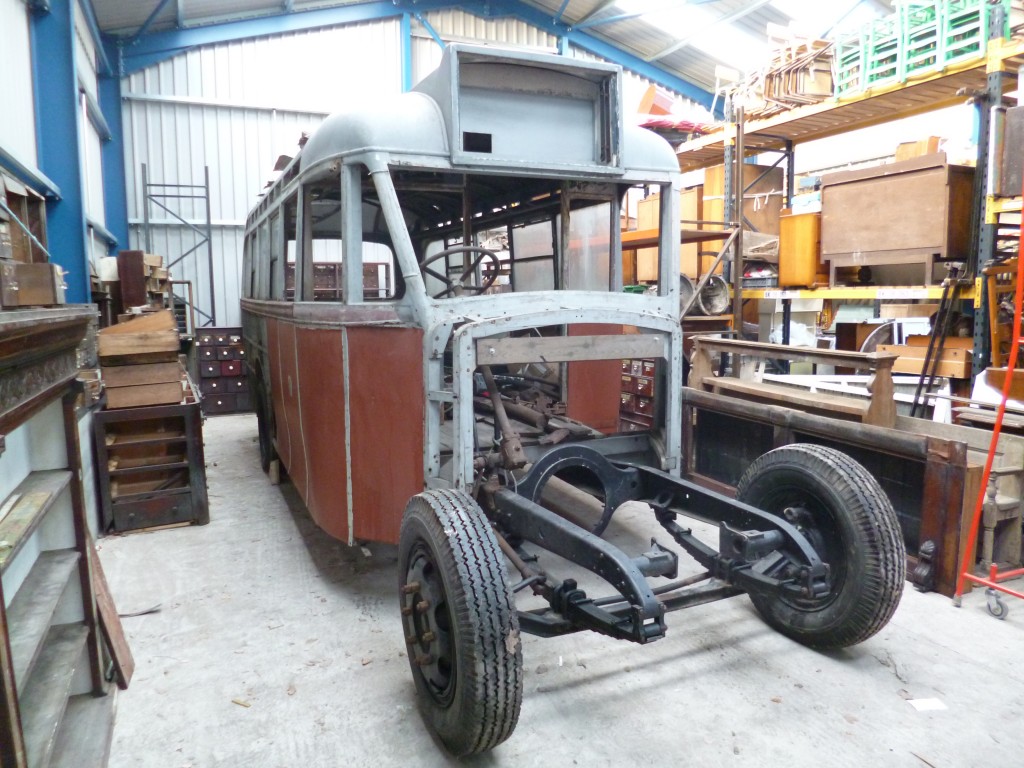 Below: Brian and Alan have been engaged in an epic battle to replace the torsion suspension bushes on the current accessible bus.  The vehicle is showing the ravages of a hard life at Beamish and even Iveco engineers consulted baulked at this particular repair!  Many of the items added when the body was built have had to be removed to gain access to the torsion bars (which run from the front suspension unit back along the chassis rail and are splined – the rotary motion of the suspension is thus inhibited by the rotary ‘twist’ on these – an alternative to a full spring pack but clearly not a very maintenance friendly option for us!).  The brake discs and pads have also been changed and work to repair the floors is also being undertaken.  Here they are about half way through the job… 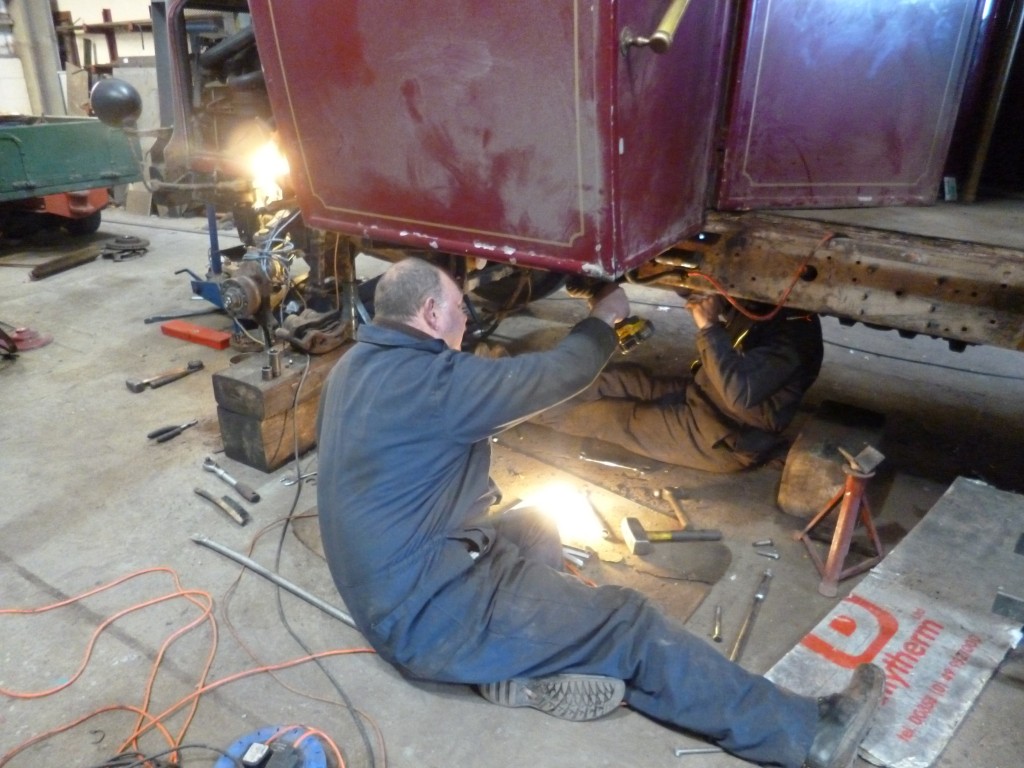 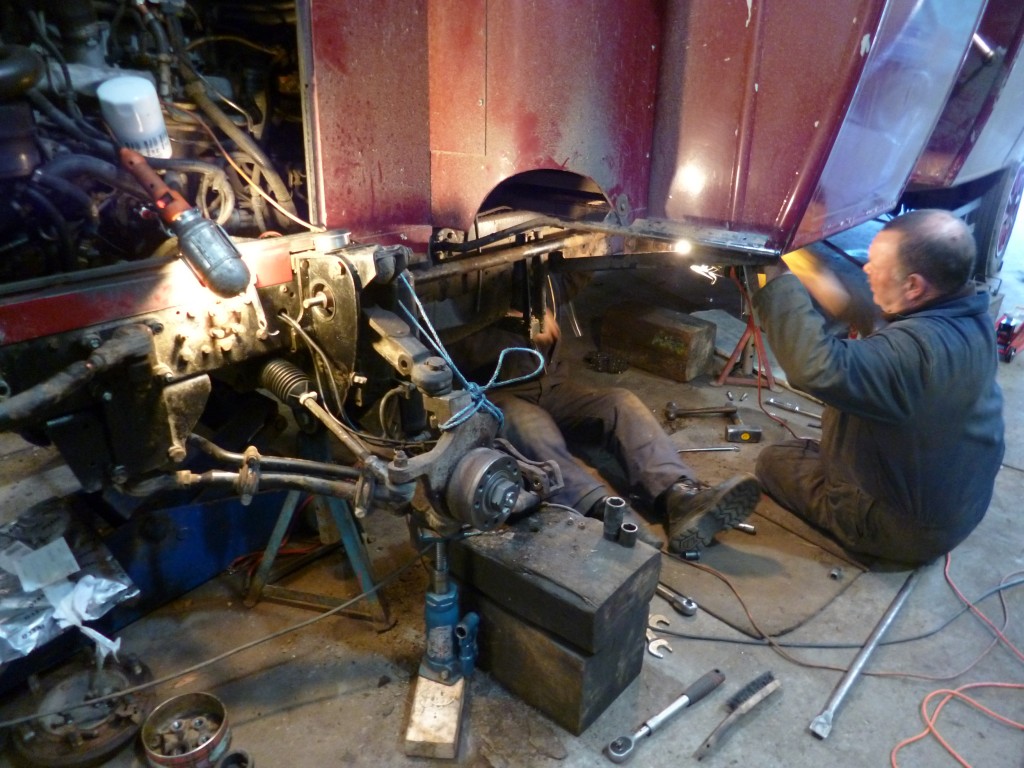 Below: The Site Support lads are working hard on the signal box, with Ian patching in new wood and David and Ryan applying the paint.  Ian has also removed the porch and will build  new one – this being deemed easier than trying to repair the one previously fitted (and itself not apparently original).  A new colour scheme is also being applied – a more accurate NER rendition than was previously applied.  I am also pleased that we can fit wooden gutters at this stage, in place of the awful plastic ones that were fitted previously. The windows are boarded up to release the sashs, which are in the RHEC for repair and repainting. 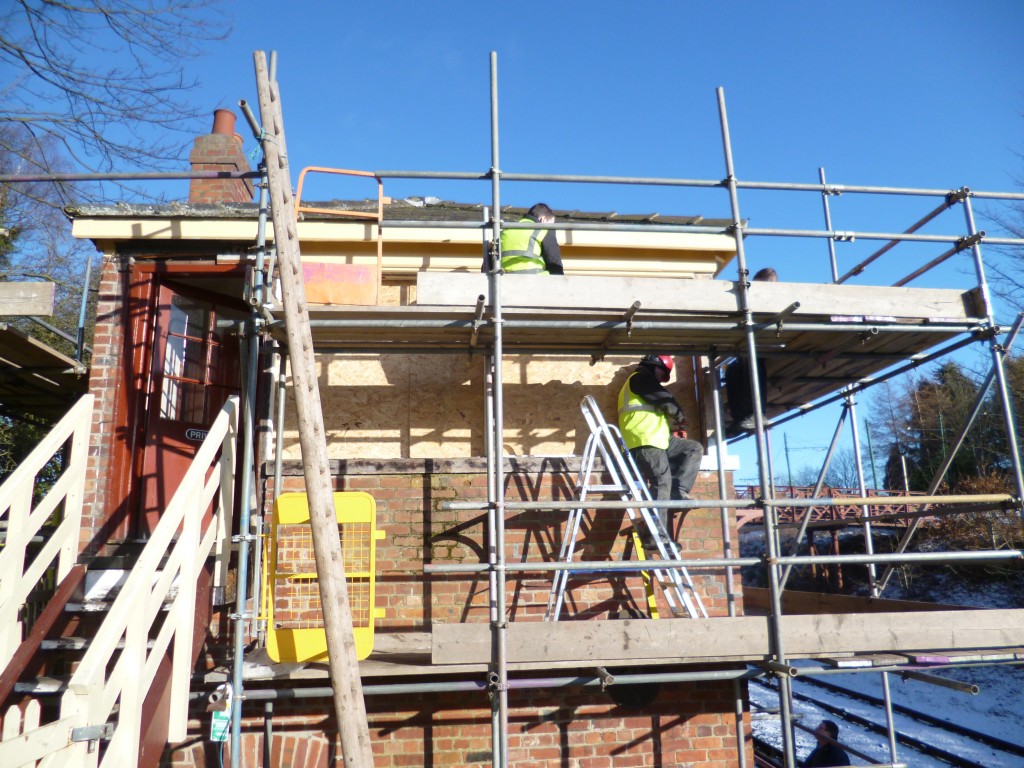 Below: A close up of the absent porch. 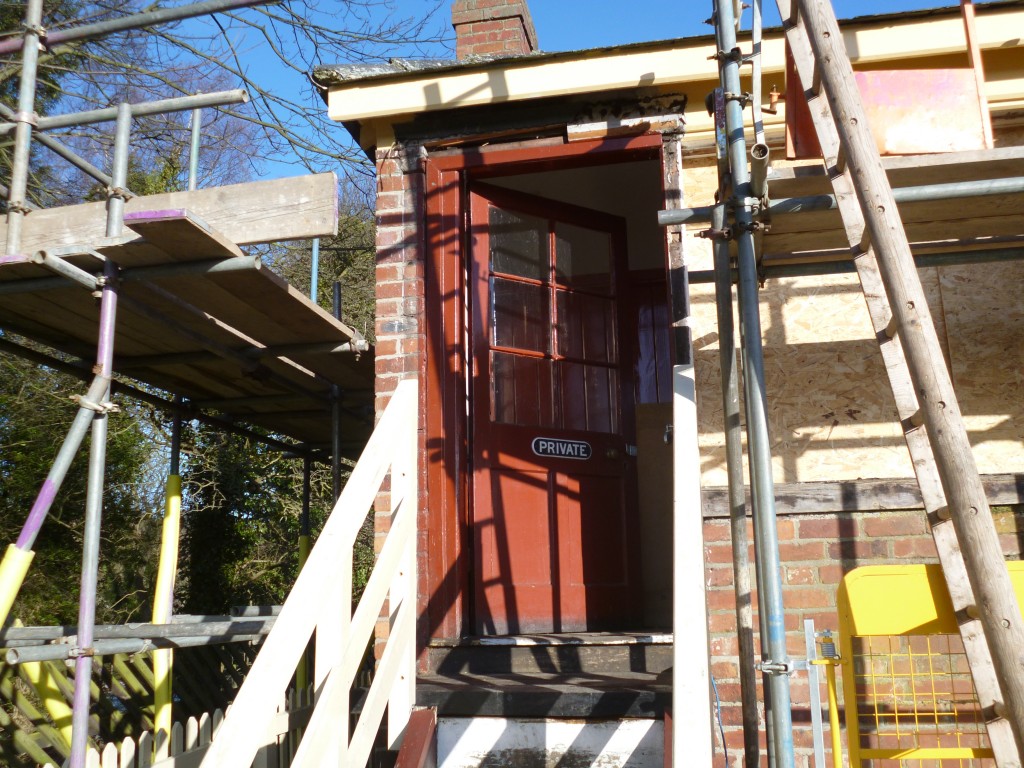 Below: The servicing pit (not ashing out pit I should add!!!) is well under way with the hole and base prepared and concrete to be poured next week.  Walls will then be built, more concrete added and rails re-laid – all by Easter!  The coaling platform will also receive its concrete flooring and railings and we can then complete the plumbing to finish off this project. 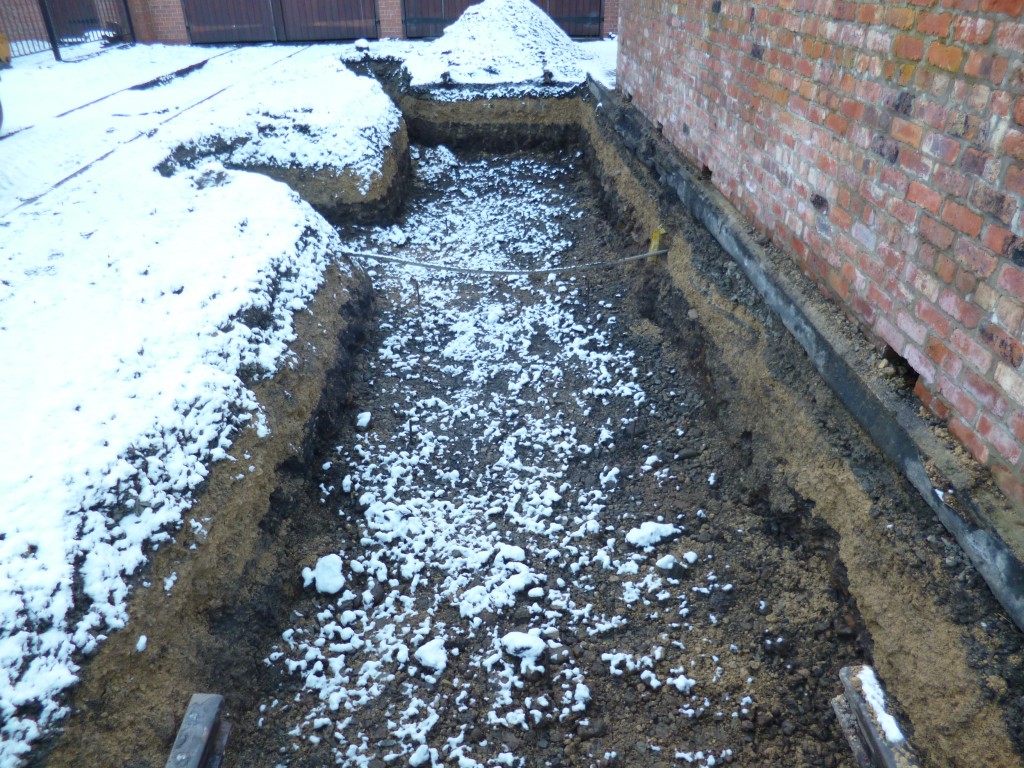 Below: Meanwhile, over in the Colliery, Darren and Mark have begun installing the turnout that will eventually give access to the yard siding and new engine shed.  The turnout was recovered from the Waggonway when the loop there was removed last winter. 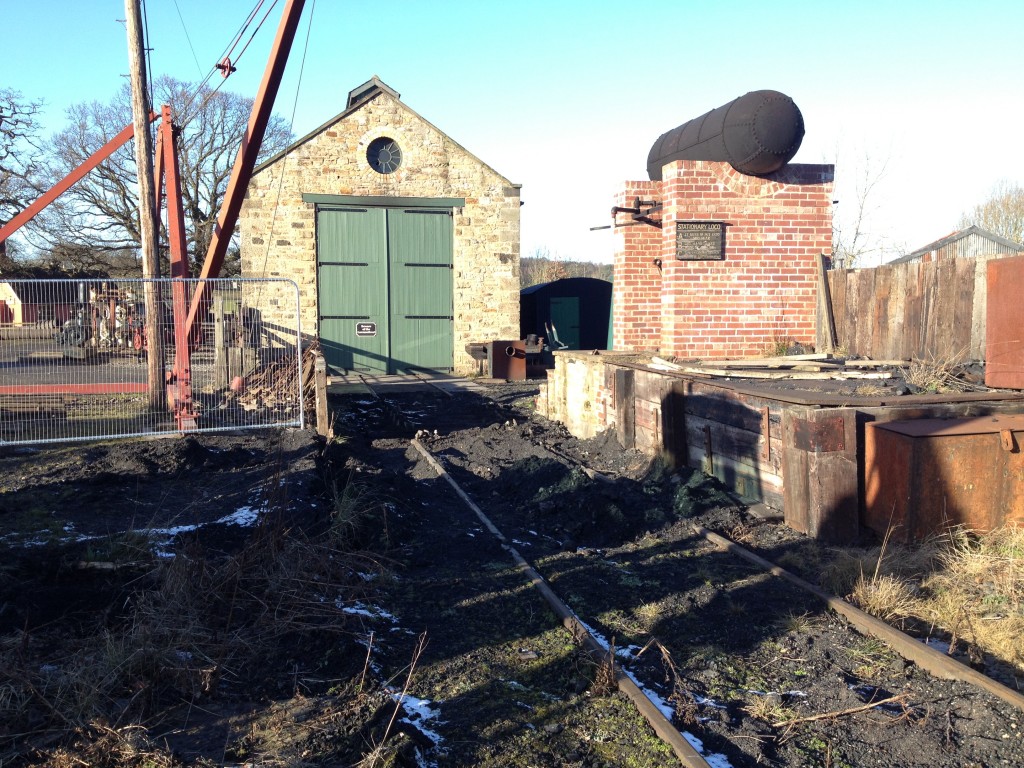 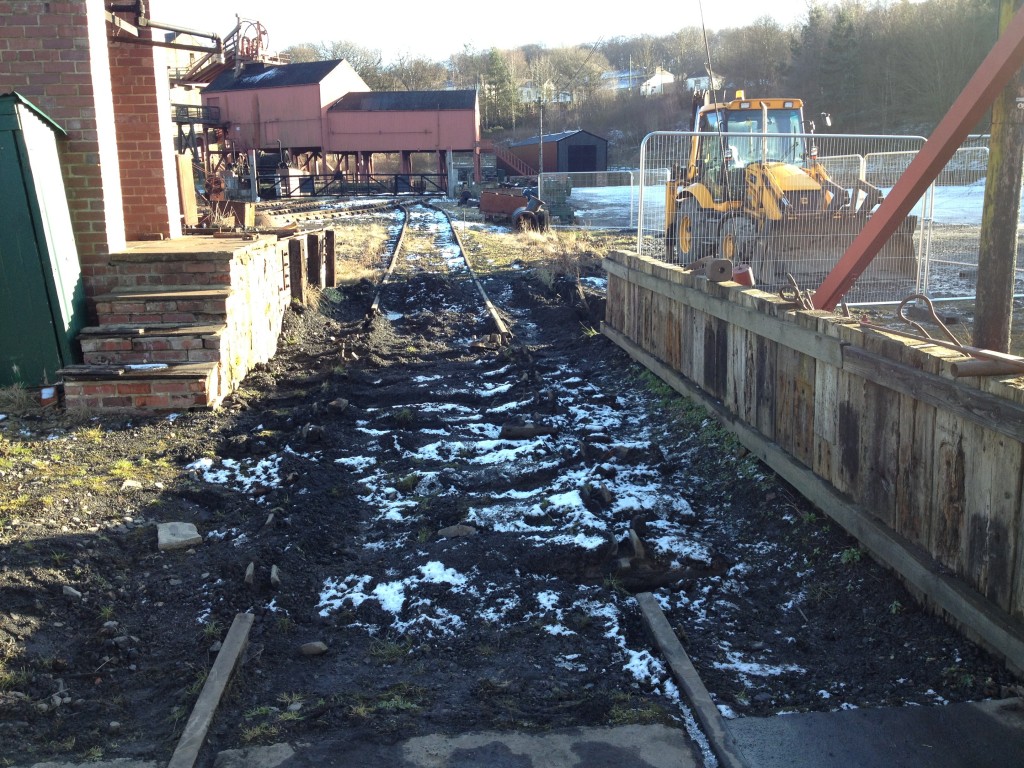 Below: We start with an overview of the new joinery area of the Erecting Shop – much more spacious an already a comfortable home for Tony and Matt B (we have quite a few Matts, Pauls and Dans working in the team…).  Matt B is seen here making replacement panels for the Town tram shelter signs. 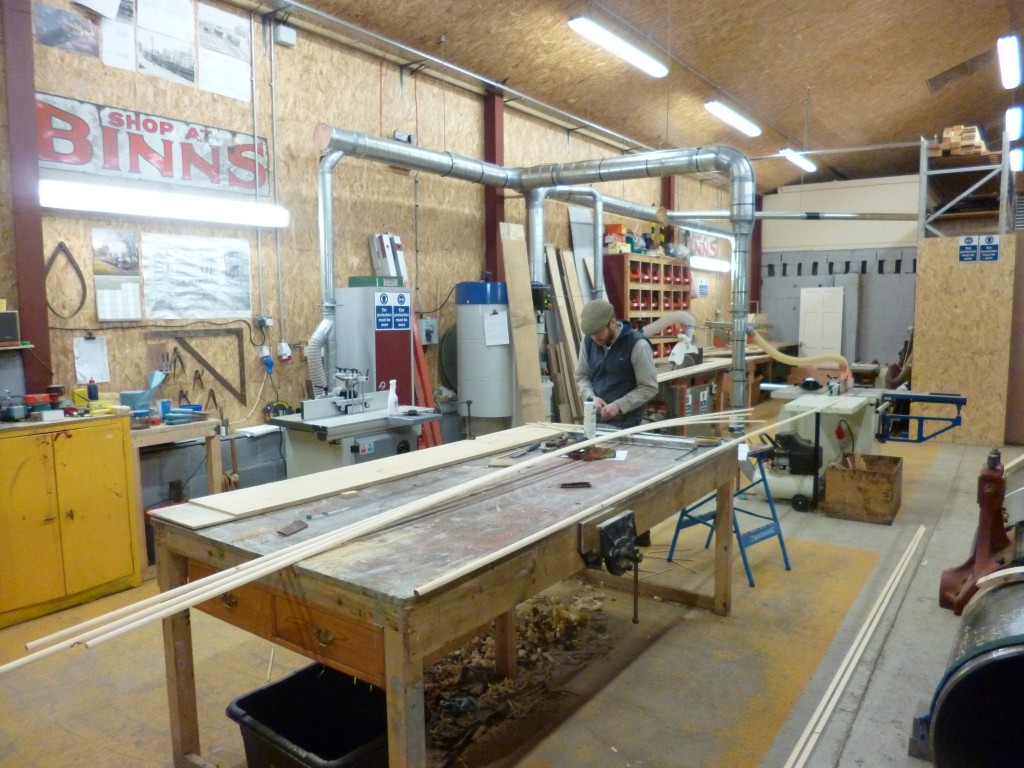 Below: Dave Young continues to work on Samson, progressing the boiler cladding – seen here rolled and resting on the wooden spacer pieces (in place of crinolins).  Note the oil tray  – to catch the rain of oil from the crankshaft. 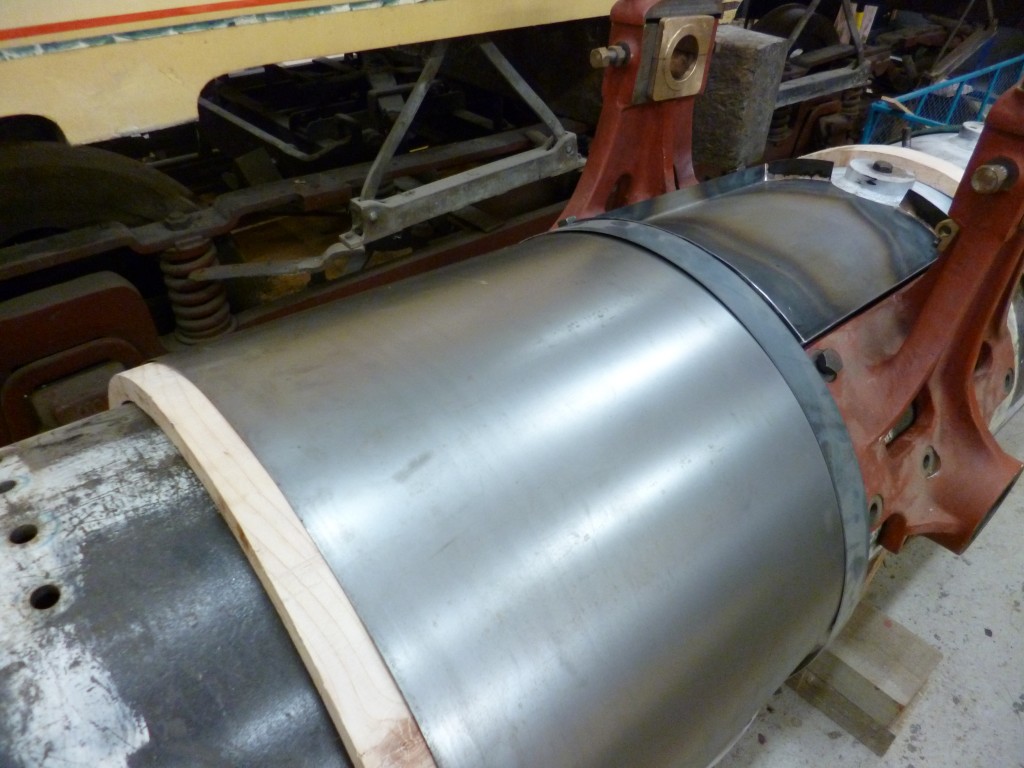 Below: Ahead of a Sunday session on the narrow gauge projects, Matt and I had a dry run assembling the Joicey waggon body (to mount on the much modified ex Hudson ‘bomb’ wagon chassis).  Tony had cut the unwieldy 1 inch thick marine ply sheet into the correct sizes for us and following a meeting (!) to discuss the design we set about erecting the body and drilling it for the steel brackets.  Once complete we took it apart again, ready for painting.  The next jobs are to make the corner brackets and relieving plates for the outside of the body (from recovered scrap steel sheet – complete with a genuine patina!) and fit the solebars.  Plus lots of painting. 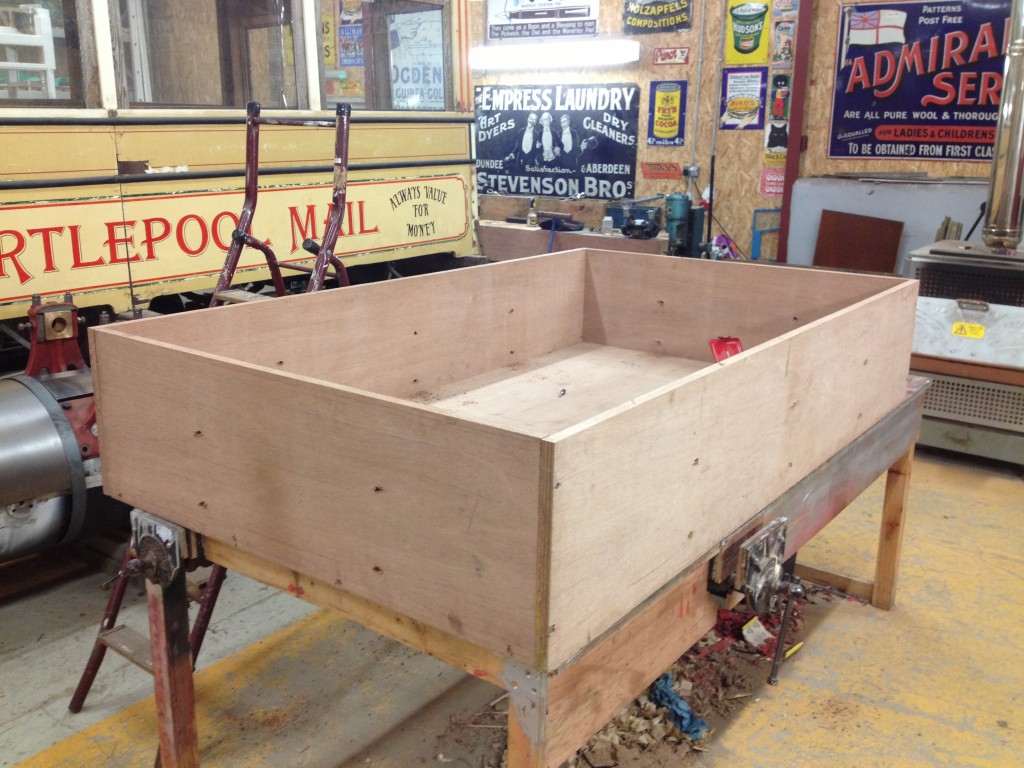 Below: Sheffield 264 is progressing, with stripping being completed and primer being applied.  Note the missing panel has been replaced – teak reclaimed from material recently recovered and which proved ideal for this application.  Tony has been preparing beading and also carrying out some further body repairs, whilst Phil and Sarah work on the paintwork.  Les Brunton has rebuilt the electrical control board, which is located beneath the seats, and this will be refitted at an early stage in reassembly. 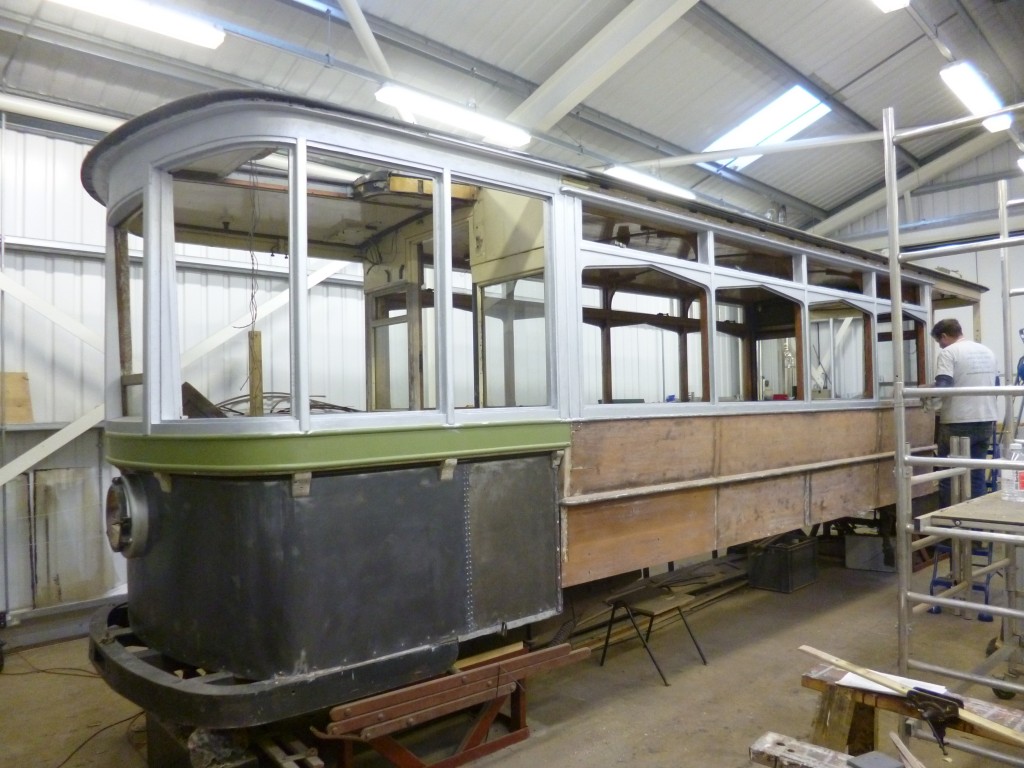 Below: The recent withdrawal of Sunderland 101 has caused much interest, and not a little speculation, amongst enthusiasts and so I would like to reassure folks that our fleet is not in crisis and whilst a bit tight at the moment, there is a plan, and abandoning this in favour of short-term fixes (such as might be targeted on 101) would seriously disrupt our programme.  We have two members of the RHEC team, two fitters and one electrician – all of whom have a huge variety of work around the Museum to carry out and therefore I have to plan the projects and use of workshop time, resource and budget very carefully.  I therefore thought readers might be interested to see the table below – it is the workshop and maintenance (above the regular running maintenance plan which is dealt with on a separate planner) programme for the tram and bus fleet, including vehicles in use, under restoration/overhaul or awaiting such.

The yellow sections indicate reduced use, the blue section show vehicles out of use and awaiting attention, red shows active restoration/overhaul periods and green represents vehicles available for traffic.  To avoid rampant speculation or us being held to this (after all, things change and this is a very fluid programme where required) I have hidden the identities of each vehicle (which have a line across for each) – though, as an example, the first line indicates Gateshead 10.  This shows it in reduced use, then undergoing re-tyring for a return to traffic over the winter season, before withdrawal for body repairs and repainting – an example of recent change to accommodate other events within the department.  Its next booked overhaul would then be 2021 for tyre turning etc.  That’s the theory anyway!  There is a further version of this that indicates intervals for re-varnishing etc.

There are no prizes for deciphering the rest of the table! It perhaps serves to show how these things have to be planned, and the competing priorities the fleet places on the team in terms of maintaining sufficient numbers of vehicles (and seats) for the operations department to do their job to the full.