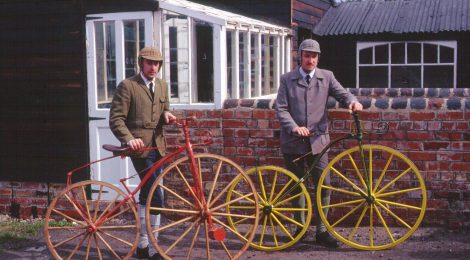 The important and diverse collection of cycles at Beamish has not received a great deal of treatment on the blog, something that is now going to be remedied, thanks to the work of one of the Friends of Beamish directors, Ian Bean. For Number 4 in this series we are looking at the early cycle collection at the museum, with future instalments to cover the High cycles (Penny Farthings to many) and hopefully the Safety bicycles too.

Beamish has an extensive collection of human powered transport in its collections.  This is very appropriate considering the importance of this form of transport, particularly in the time periods represented at Beamish.  I would like to start with the oldest machines in the collections, the wooden wheeled, Victorian, cycles.  Many of these machines have been conserved and restored to rideable condition by the Friends of Beamish workshop volunteers.  I hope you will find the accompanying, much simplified introduction to cycling history, useful in providing context to the collection.

The running machine, or Draisienne as it became known, had been introduced to France in 1818 by its inventor, Baron Karl von Drais, a native of central Germany.  In essence, this was two wheels joined by a bar of wood.  The rider sat astride the bar and used their feet on the ground to produce forward momentum.  In 1819 an improved machine was designed and built by Denis Johnson of London.

Johnson was a carriage maker with a much more professional approach to design, manufacture and marketing.  These “hobby horses” as they quickly became known were much more refined than the machines produced by Drais.  The important distinction, from our point of view, is that the hobby horse does not have pedals.  Beamish does not have any of these machines in its collections but we do know that Lord Lambton and the Duke of Northumberland were owners.

The hobby horse was not the most practical, or easy to use, form of transport and they soon fell out of favour.  Inventors, during the first half of the 19th century, turned their thoughts to “self-moving carriages” with three or four wheels.  At this stage power was as likely to come from the arms as from the legs.  In 1824 Mr McDonald of Sunderland produced a four wheeled vehicle, powered by treadles, and claimed it could carry seven people.

Birth of the Boneshaker

In the 1860s the two wheeled “velocipede” started to appear.  The French design of the velocipede is generally credited to Pierre Michaux, a carriage builder.  He basically added cranks and pedals to the front wheel of a hobby horse but with much refinement, producing an elegant and light weight machine by the standards of the time.

It didn’t take long for the craze to catch on in Britain and many companies, and individuals, started producing velocipedes or “boneshakers” as they were soon referred to, due to the bone tingling road shocks which were transferred to the rider on the unsurfaced roads of the period.

Manufacturers started to appear across England with velocipedes being made by Newton, Wilson and Co of London and Birmingham.  Tangyes of Smethwick started making large numbers of velocipedes in their Cornwall Works and in Nottingham, Thomas Humber, later to be more famous for cars and motorcycles, set up production.

Even at this stage the manufacturers of one city were beginning to stand out for their inventiveness, and that city was Coventry.  It was their innovation which secured the long-term international popularity of British cycles and made Coventry the world’s cycle capital.  The Franco-Prussian war of 1870 limited French production, but encouraged English makers to fill the void in supply.

One maker, with particular connection to the museum collection, was the Coventry Machinists’ Company.  The firm had previously been called the Coventry Sewing Machine Company and changed its name as velocipede production started.  They would have a host of familiar names working for them, several of which we will meet later in the story.  Before leaving the company in 1869, their works-foreman was one James Starley, whose inventive genius gave Coventry and the whole British cycle industry a decisive lead.

Up to this point velocipedes were thought of as play-things, but in February 1869 John Mayall rode from London to Brighton in around fifteen hours.  This was not a spectacular time for 53 miles, indeed it could be walked in less time, but it opened peoples’ thoughts to the idea of touring by velocipede.  Training schools and tournaments became popular and the velocipede entered the world of competition.

The exponents of this sporting activity encouraged manufactures to develop lighter machines with larger front wheels and smaller rears, remember as the cranks are fixed directly to the front wheel spindle, the bigger the wheel, the further and faster you can go for each revolution.   The wooden wheeled boneshaker was evolving into the all metal wheeled, high bicycle which would later be nicknamed the “penny farthing”.

Beamish has four boneshakers in its collection dating from c.1868 – 1870.  It is exceedingly difficult to be certain of manufacturer unless a name plate is attached – a luxury we do not have.

The fourth machine is a slightly later model with the spring being pierced allowing the head stock to pass through it.  This feature became more common as the boneshaker developed into the high bicycle.  The three painted machines have had their finish restored as closely as possible to the remnants of original colour found on the machines.

Notes on riding:  None of our machines are fitted with mounting steps and they are much larger than they first appear.  The recommended technique is to grasp the handles and run alongside until sufficient velocity is reached, at which point the rider vaults into the saddle.  The saddle and pedals can be adjusted to suit the rider’s stature.

As the machines developed, pedals with weights were added so the rider’s foot could always find a flat surface.  Experience proved that a triangular wooden pedal worked very well.  The spoon brake is operated on the rear wheel by twisting the handlebars which pulls the operating cord.  It is possible for both wheels to lose traction, hopefully not at the same time, as the iron tyres do not grip very well on hard surfaces.

The wheels have ash rims and hickory spokes and are fitted with plain bearings which would have been lubricated with whale oil.  Two of our machines are fitted with leg rests on the front frame extension.  These could be used to keep one’s feet out of the way of the rapidly rotating pedals whilst coasting, although the fast rotation of the pedals can produce very unpleasant wheel wobble if travelling at any great pace!

On Your Bicycle- An Illustrated History of Cycling by James McGurn