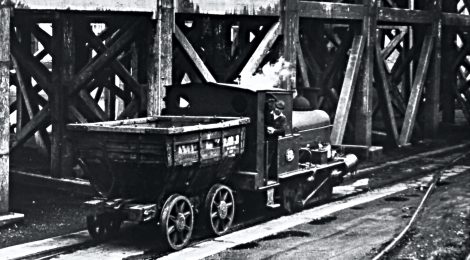 I regularly search online for negatives or prints relating to the transport collections at Beamish. Seaham Harbour is a particular favourite and over the years the search has netted dozens of images, many of which have appeared on the blog.

I usually pass on the negatives and transparencies to the photo archive, who scan them and send me a copy to use here, and then file the originals in the cold store, retaining the digital copies to add to the database in due course. Without this resource, the latest images have either been scanned on a photocopier, or are iPhone photographs taken against a white screen then tidied up as best I can on the desktop – not ideal and obviously they will all be re-scanned in due course. But in the interests of keeping the content on here flowing, here are some recent images, purchased as either unique prints or negatives. All of them are Seaham related…

Clio’s cab survives in the Stephenson Railway Museum, North Tyneside. It has been incorporated into a display showing part of a locomotive firebox, with the original finish being conserved as far as is possible. Clio, though not this cab, was built at Gateshead works in 1875 by the North Eastern Railway as one of a batch of their 120 class 0-6-0 tender locomotives. It was later fitted with the cab from Ajax (an 1867-built Blyth & Tyne Railway, later North Eastern Railway 0-6-0 dismantled at Seaham in 1926) showing how much rebuilding and interchanging of parts took place at Seaham when creating locomotives for the Londonderry Seaham and Sunderland Railway and its colliery railway network (which teamed its coal in both Seaham and Sunderland). Clio was out of use by 1943 and dismantled by June 1953 – the cab surviving in the yard for reasons unknown, but eventually enabling it to be preserved and placed on display as part of the National Railway Museum Collection, from whom it is on loan. I took these photos in 2005 and I believe the cab is still on display at the museum.

Read more about No.17 here:

Some further Seaham material that might be of interest can be found here: http://www.nigeltout.com/html/seaham-1980s.html and here: