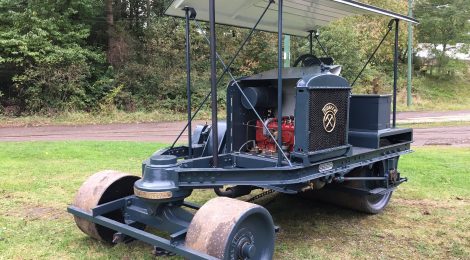 Beamish has a long track-record of restoring mechanical objects, not least those that have apparently little or no chance of otherwise having any kind of operating future.  The Friends of Beamish volunteers have been instrumental in many of these, and so for this post we will look at the restoration of a petrol motor roller, number R025, and which was something of an ‘impulse’ buy from a scrap dealer in November 2012.  It came from a location in Tweedsmouth near Berwick after I visited the site following a tip-off from someone who had seen it from the window of a passing train and reported it on an online forum dedicated to traction engine and steam roller matters.

Enquires led to a contact, and the roller was examined in an otherwise derelict yard.  The site was part of what had been 52D, Tweedsmouth Engine Shed, which closed on the 19th June 1966.  The remaining section of building was part of the North Eastern Railway square roundhouse built in 1877/78 and which had latterly been used as a builders merchants until two fires in 2009 and 2010 sealed its fate.

R025 was in attractively complete condition, though was clearly going to be a challenge for the restoration team who would gather to restore it.  It was therefore decided to start work at an early stage, and build a momentum, rather than place it into store.  There was also a growing interest in playing cricket at Beamish and the events field was in use for various mini-league games – so a grass roller would be quite a useful tool potentially!  The roller was swiftly collected and moved to the new Regional Heritage Engineering Centre workshop for the Friends to assess.

Built by Barford & Perkins in Peterborough, the leading motor roller firm, its design can be traced back to their first internal combustion design in 1904.  They broke the tradition of the time by motorising the more familiar horse drawn roller technology rather than trying to update the tried and tested steam designs of the day.

B&P could trace their roots back to 1840, as agricultural machinery manufacturers. In 1919 the company joined AGE (Agricultural and General Engineers), formed in 1920 in an attempt to form a collective of firms to compete better with foreign competition. This failed spectacularly in 1932 but the profitable Barford & Perkins element still had potential and a rescue bid was formulated, that would see B&P merge with one of the other big names in UK road rolling history.

The charismatic Edward Barford would, in 1933 merge Aveling & Porter (also part of the AGE holding company) with Barford & Perkins to create Aveling Barford, would recall in his autobiography ‘Reminiscences of a Lance Corporal of Industry‘ (he preferred this rank to ‘Captain of Industry) the decline of AGE and the ruin of the companies within the group, the lack of vision or panache of the descendants of the great firms involved in tackling the problem and the sinister influence of one G. E. Rowland.

Aveling Barford arose from the ashes of AGE with great assistance from Ruston and Hornsby and R Lister.  With this assistance came an obligation to move the works from Rochester (where B&P had moved its motor roller production to in 1931) to Grantham, where Rustons had a vacant factory premises.  The move was made, the largest move ever carried out by the London & North Eastern Railway with as many as thirty wagon loads of equipment being moved per day through the autumn and winter of 1933.  We leave our historical narrative there as Aveling Barford was a very different beast to the company which built R025.

Readers wanting to explore this section in more detail are invited to follow the link below to an earlier post on this site containing further information on Barford & Perkins:

R025 was one of 20 ordered by the “Air Ministry”. “R025″ was delivered to Leuchars, Fife. Dispatched 13/2/ 1925. The original engine was an Albion 4cyl with works numbers 2016. This batch (R011 to R030) was recorded as being painted in “R.A.F. Blue” (BSC633). It had a later type frame than the early D4 model. The type was very popular for grass work such as horse racing course owners. Newmarket, Hull and Newbury were early owners before the D4 model was adopted as an airfield roller by the War Office (Flying Office, Netheravon Royal. Flying Cor.) from March 1914.

Most of the batch that included R025 (although this particular one is not specifically listed) were listed as “Sold from R.A.F. Surplus Sales” to new owners in various locations in France, England and Scotland about 1934 – Listed in Barford Perkins records where they were contacted by the new owner or collated from reliable reports. Incidentally all “Air Ministry” model D4’s were supplied with a canopy.  It was sold off in the 1930s, though its history up to the point that the scrap dealer from whom we acquired it is unknown.

One for the future…

For readers interested in learning more about Barford & Perkins motor rollers, and some of the other makes available, a number of trade catalogues and manuals are available on this site – link below for easy reference. Various references are made to R025 on the blog, and a search ‘R025’ will take you to the relevant posts.