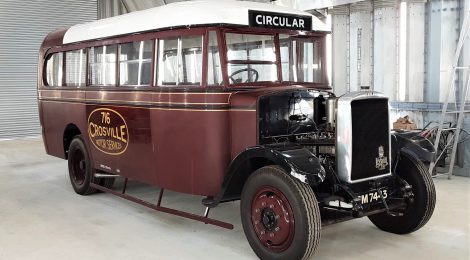 Once again it has been a bit tricky finding news to report on this blog, as the transport situation remains static, with the two Daimlers operating in turns on the circular route and the WAV operating on-call as and when it is required. However, by way of some images and extended captions, here is an attempt at a news update!

I’m trying to keep the updates flowing for work on Crosville 716, aware that it is probably the most interesting thing on the blog at the moment, and also hoping that it has appeal to railway enthusiasts by way of its LMS connections and the area of Wales it once served (full of narrow and standard gauge railway interest!).

The bus was varnished over the weekend, following completion of painting and signwriting. Here are some views, courtesy of John Sullivan, showing the work in progress within his firm’s new paintshop, and after, with the varnish drying.