A shorter report this week, before a break for a couple of weeks…  Plenty going on so there should be plenty to report in the next post later this month, including (I hope!) the finished Morris Commercial and Leyland Cub tipper, a start on Remaking Beamish items (crucks for the quilter’s cottage) and on-going progress on the projects covered here in recent weeks and months.  Busy times!

Below:  The Apothecary is more or less externally complete and painted now, with the internal fit-out to be completed before it is detailed with period ephemera and moved to replace the market stall on the path leading to Pockerley Old Hall.  Shamelessly invented, it should at least be an improvement on what is there, and will improve the facility for the staff who currently have to stand out in all weathers.  Some are comparing it to a prison waggon from the wild west, others the Child Catcher’s waggon in Chitty Chitty Bang Bang! 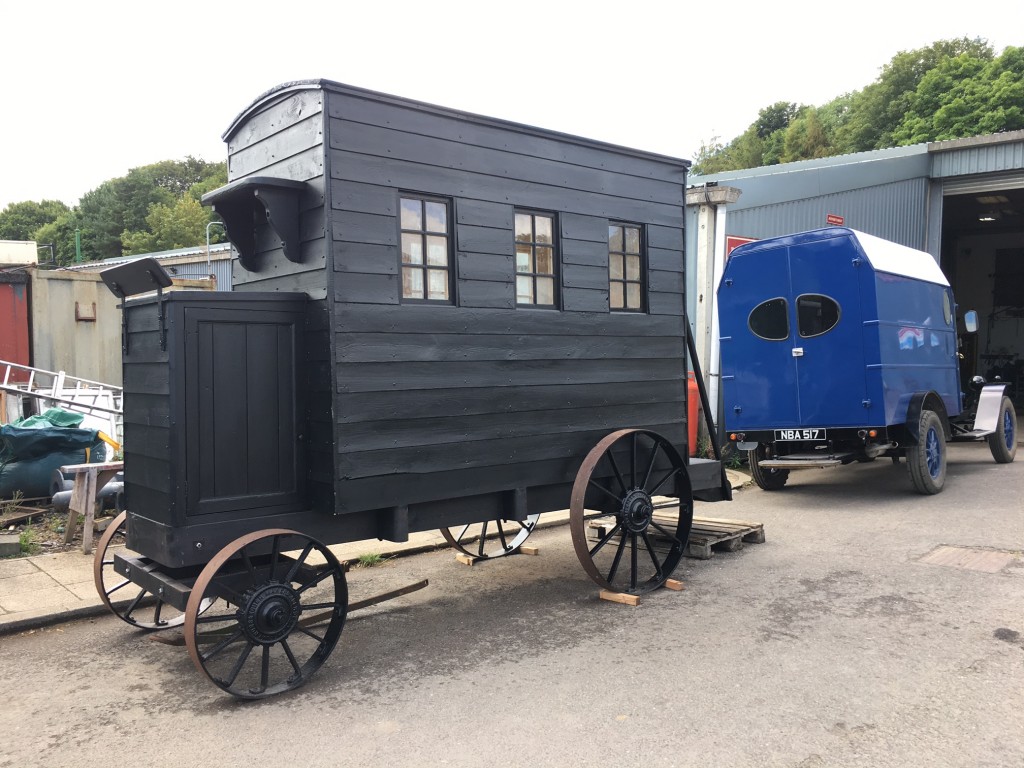 Below: The boards from the Coop have been removed, as they were known to be rotten, but just how rotten they were was quite startling!  These are now being rebuilt in the RHEC and will be painted and re-fitted to the Coop as soon as practicable as they are such a distinctive feature.  They will also revert to the Coop colours (I was never sure how the sign ended up red?) and will therefore match the rest of the building.  This shows what being economical with material costs can cost in the longer-term – marine plywood is now used for exterior jobs, though even this has causes us some problems in recent years. 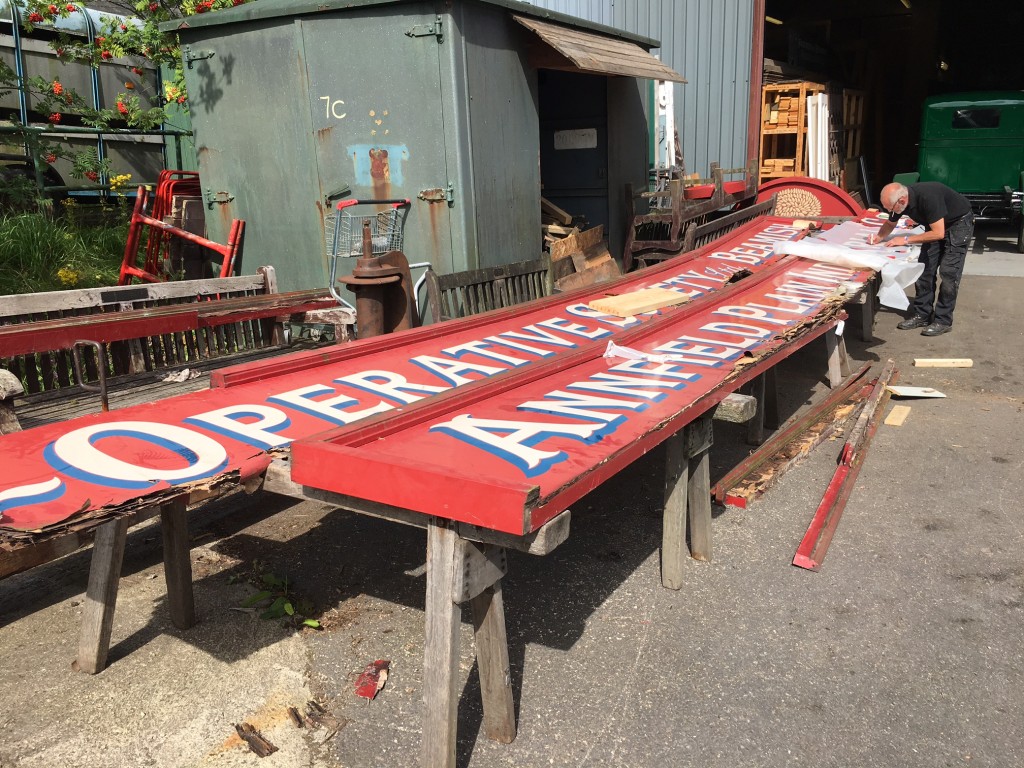 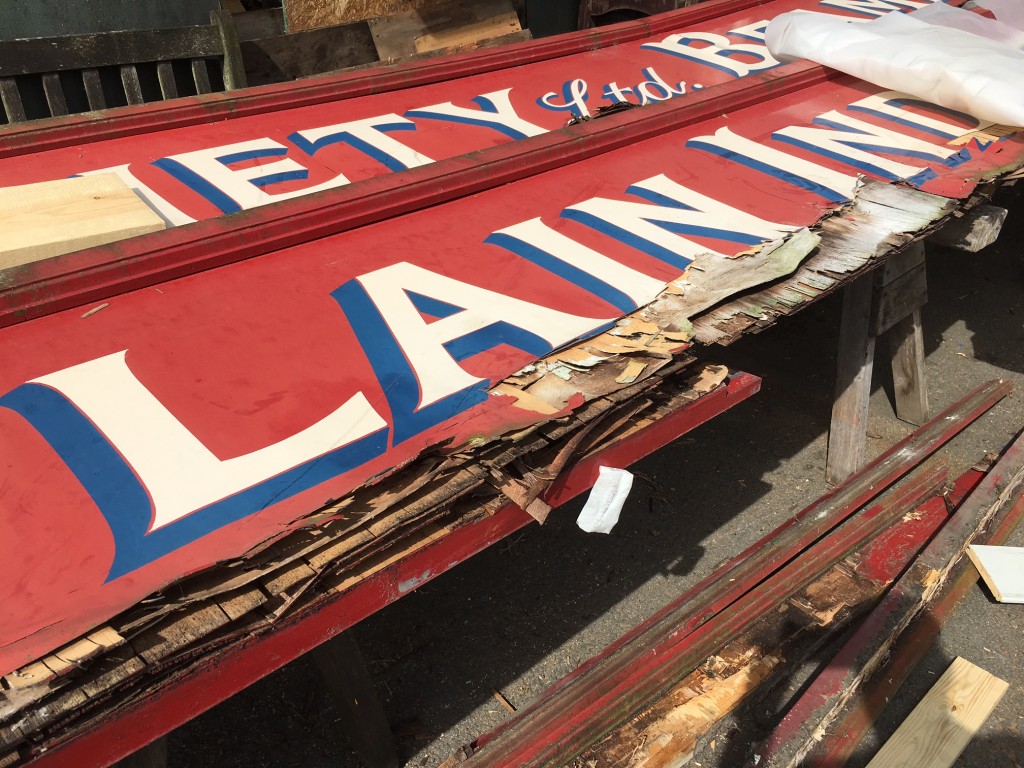 Below: The body of the Morris Commercial has now been painted and awaits fitting to the chassis in order that the floor and doors can be made (easier in situ).  This long restoration is now nearing the finish line and it will be a welcome sight around the Museum once again. 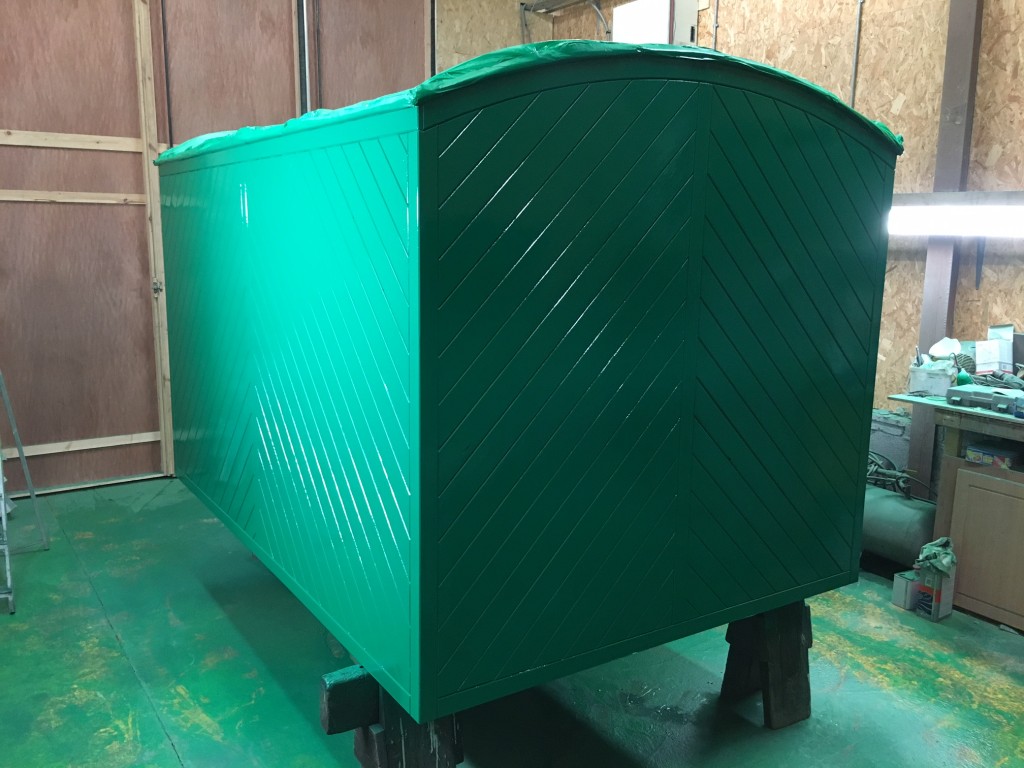 Below: As well as painting in the RHEC, Rebecca is learning new skills with Tony and Matt B, including repairing the wooden horses that she is painting – seen here rough carving a repaired section of gallopers horse. 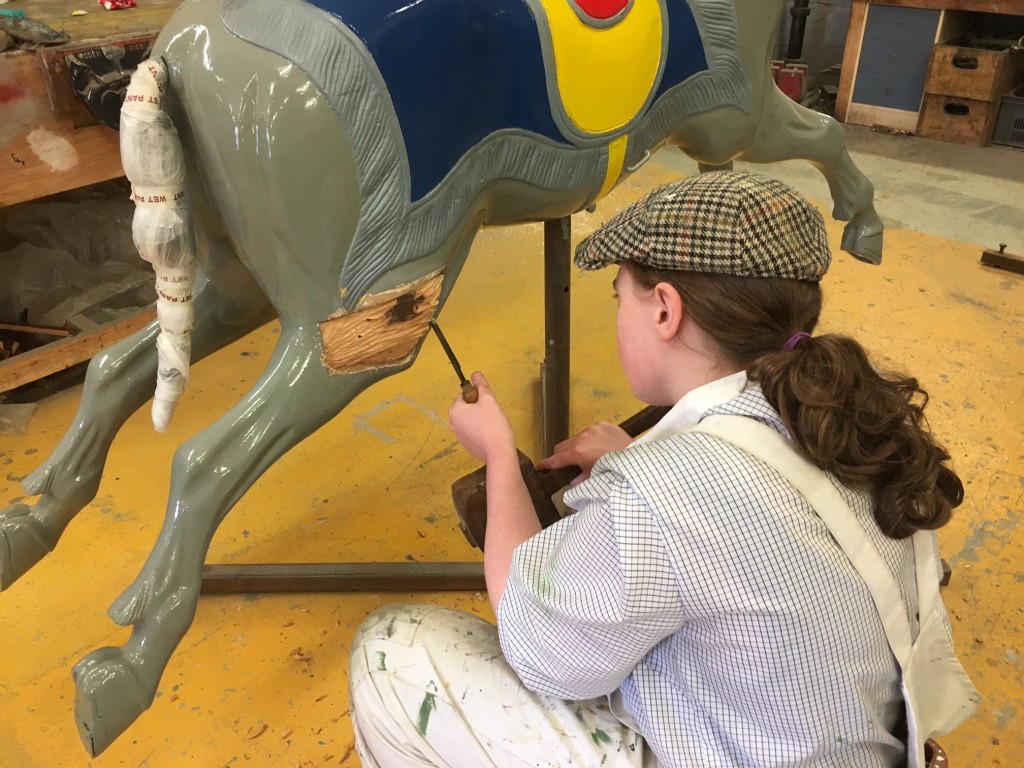 Below:  Late July sees the annual pilgrimage to Threlkeld Quarry Museum for the railway gala – this year I had the pleasure of driving the Statfold Barn Railway’s two ‘millenium’ Quarry Hunslets – Jack Lane and Statfold.  Despite the dire weather forecasts, it wasn’t too bad and the rain largely held off (until time to load engines onto trailers!).  Here are just a couple of views that I took (on the phone) which have a certain appeal…  Other visiting locomotives included No.19 from Statfold, Irish Mail from the West Lancashire Light Railway, and Cloister, latterly at Statfold but which has recently been based near Swanage.  Sir Tom provided the home attraction as always though with a compressor fitted to the train now, all of the air brake fitted locos could operate solo with the passenger set.  As always a huge amount of work goes on behind the scenes to make this event happen – so thanks to those, who know who they are! 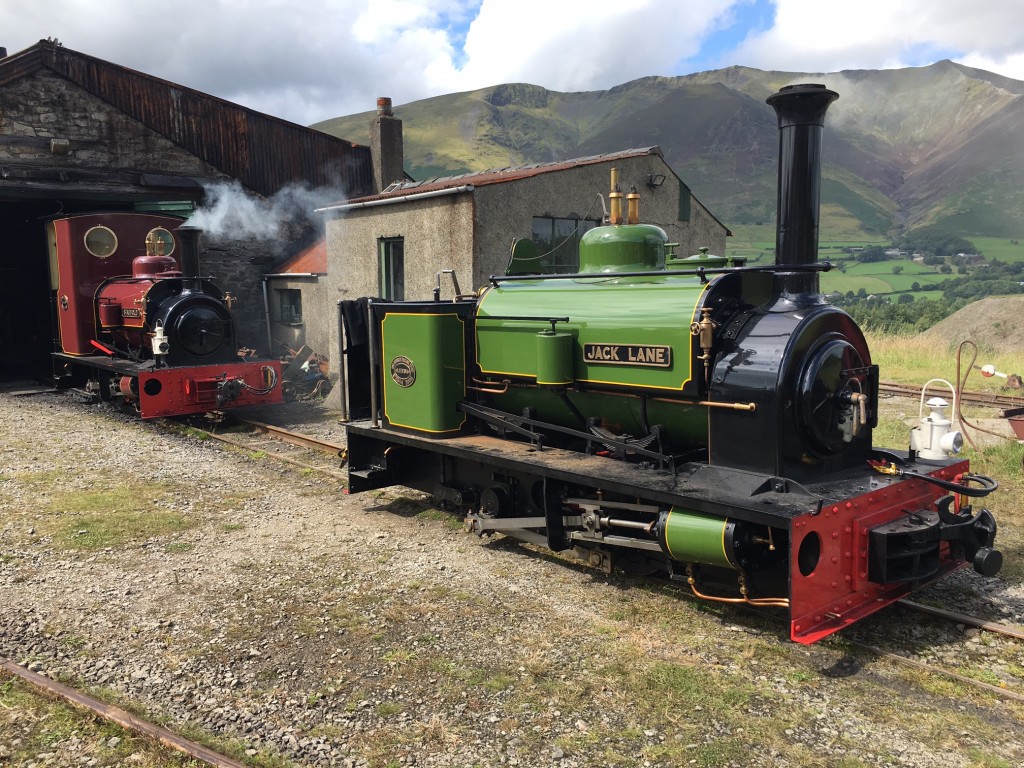 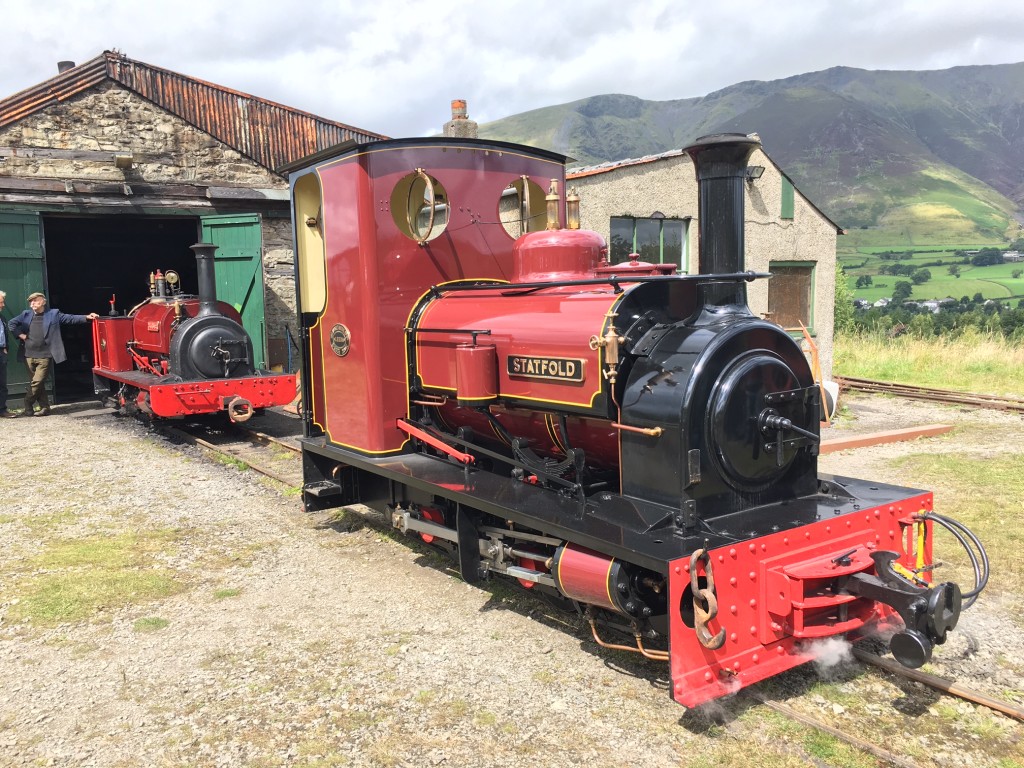 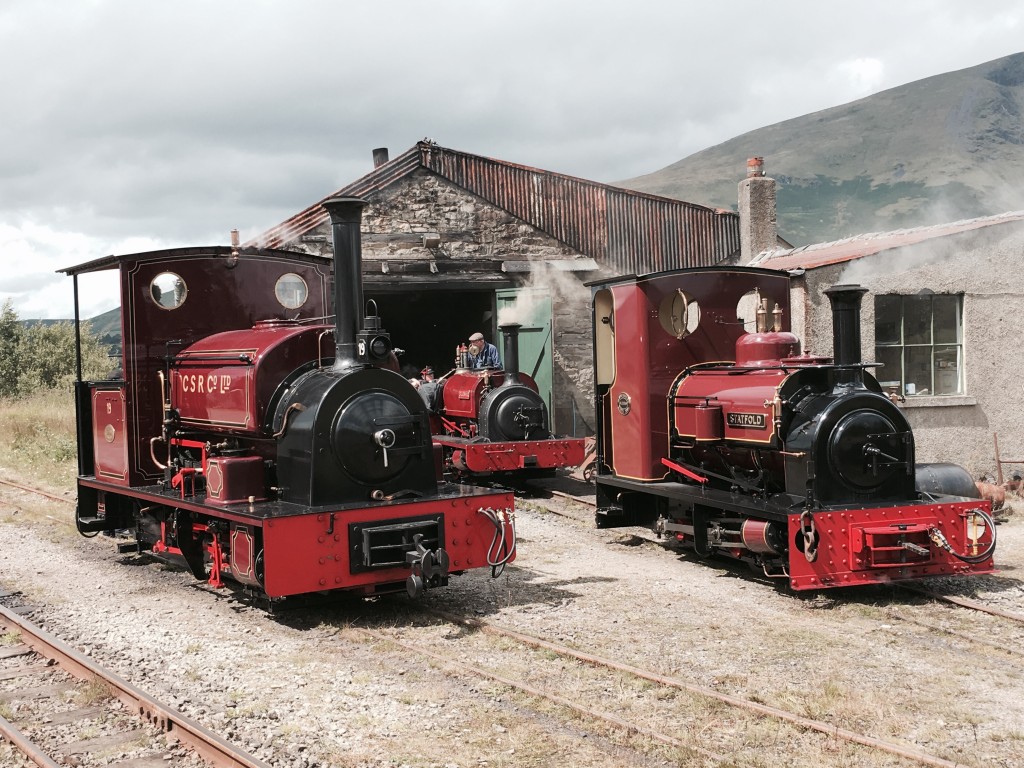 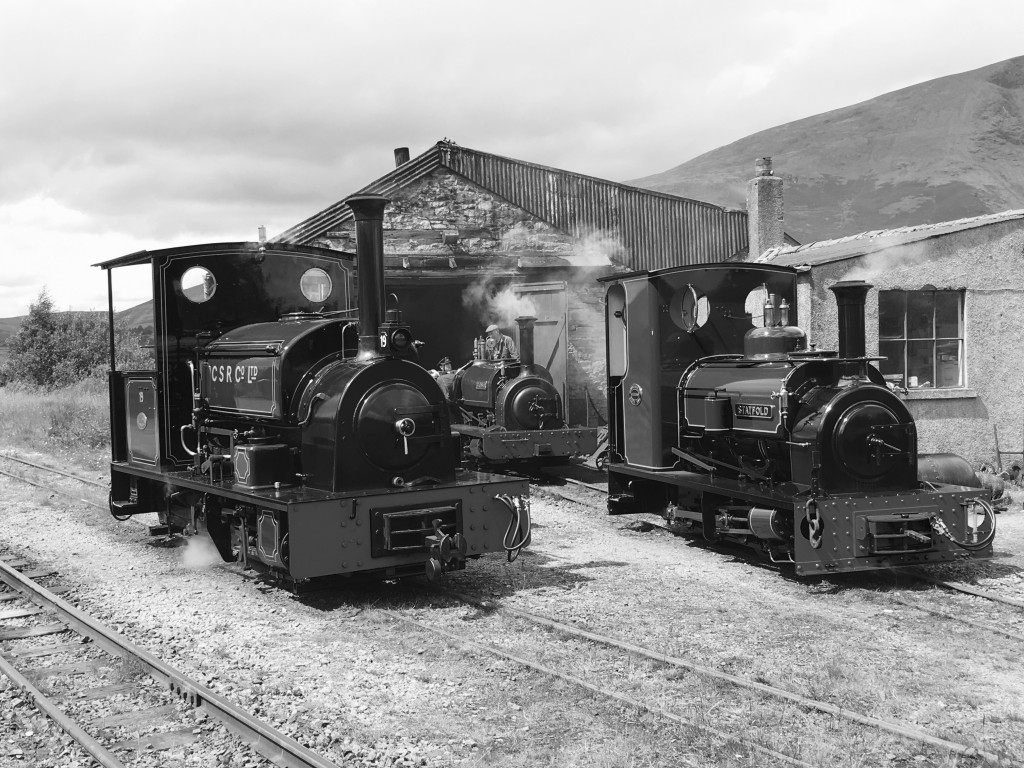