It has been quite some time since a dedicated Narrow Gauge update so I thought I would do an update on the variety of work going on.

At the GNSF each year we try to make a feature of the Narrow Gauge Railway and where practical and safe open up sections of the railway so that visitors can get up close to the locomotives and rolling stock. With the GNSF now just six weeks away (they go quickly too), we are trying to bring a number of projects to completion in time for this year’s event.

Dave Young has been working on the brake van chassis, completing all running gear. Last time this was seen on the blog the wheelsets had just been trial fitted in the axleboxes.

Below: In this view we see the completed chassis, with brake gear assembled. To test the brake gear assembly, the handbrake pedestal had been temporarily mounted with packing of the same size as the main frame of the van, unfortunately I didn’t manage to get a photo of that stage of the work. The pedestal will be reinstated in the van when the body is fitted onto the chassis, then it can all be finally tested. 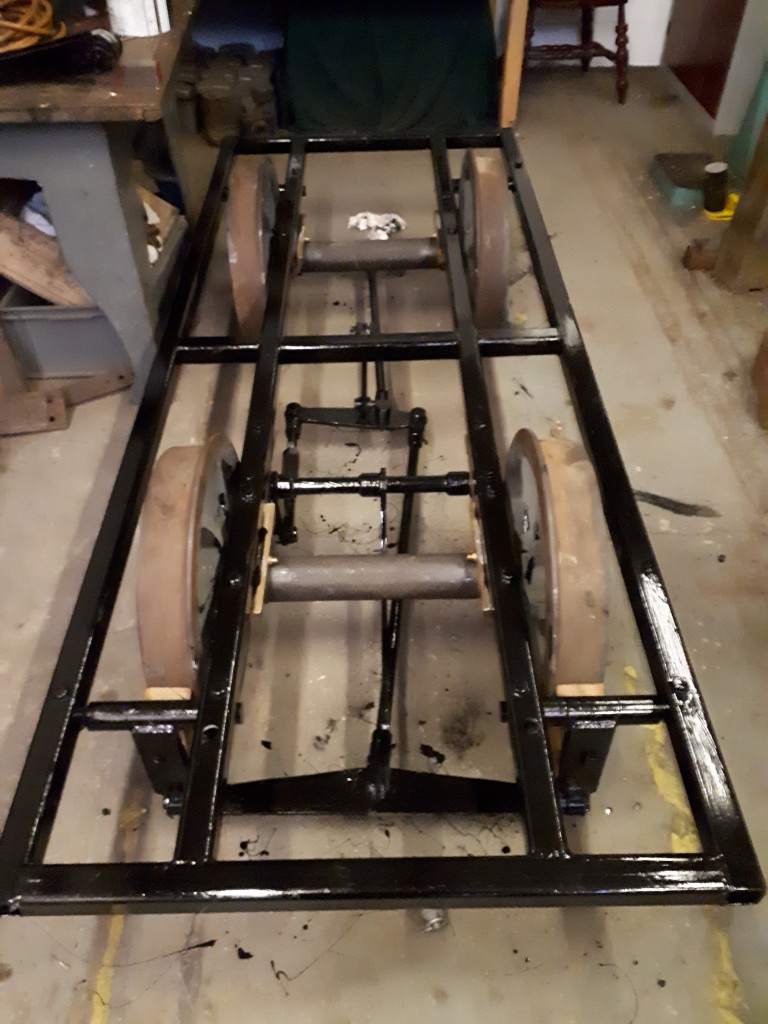 Below: Later in the week the body and chassis were brought together in the RHEC, then the body lifted onto the chassis. The main jobs remaining are to complete the pipe runs for the axlebox lubrication and to manufacture and fit the buffing and draw gear. There are other detail jobs to complete too. The van will be sign written to give the van an identity. The identity will be V3, V meaning Van and the 3 because it is the third Beamish built wagon. 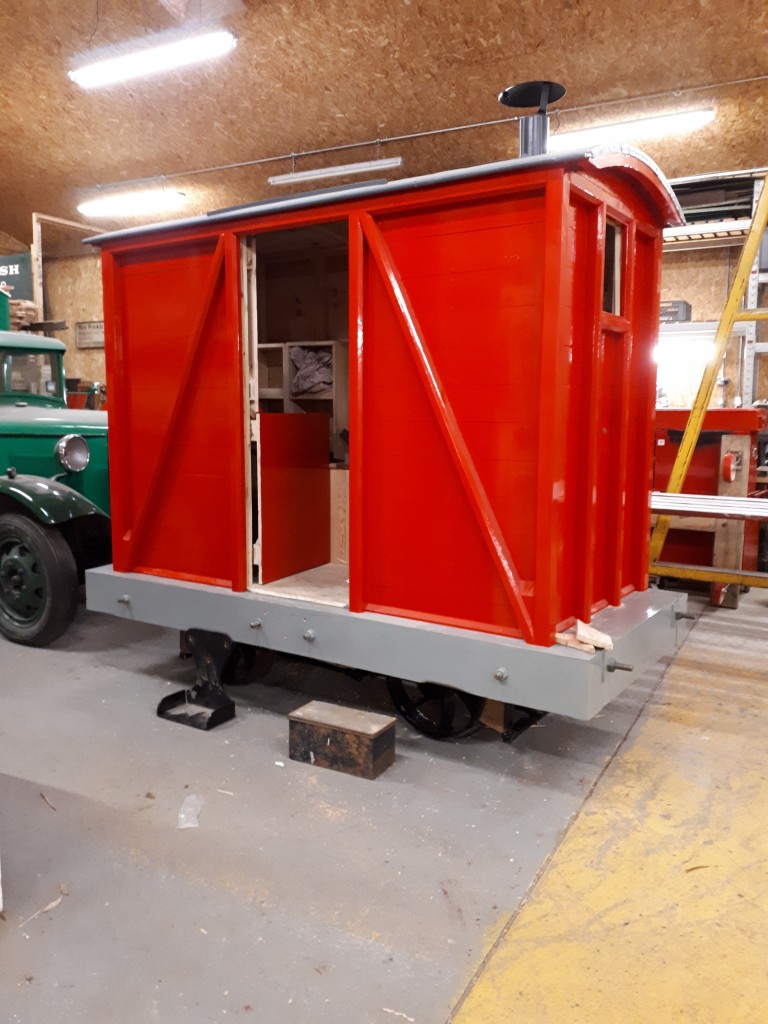 The first of the tipper wagons (830) is now complete and back on the railway. Again signwriting is to be done but it is otherwise complete. 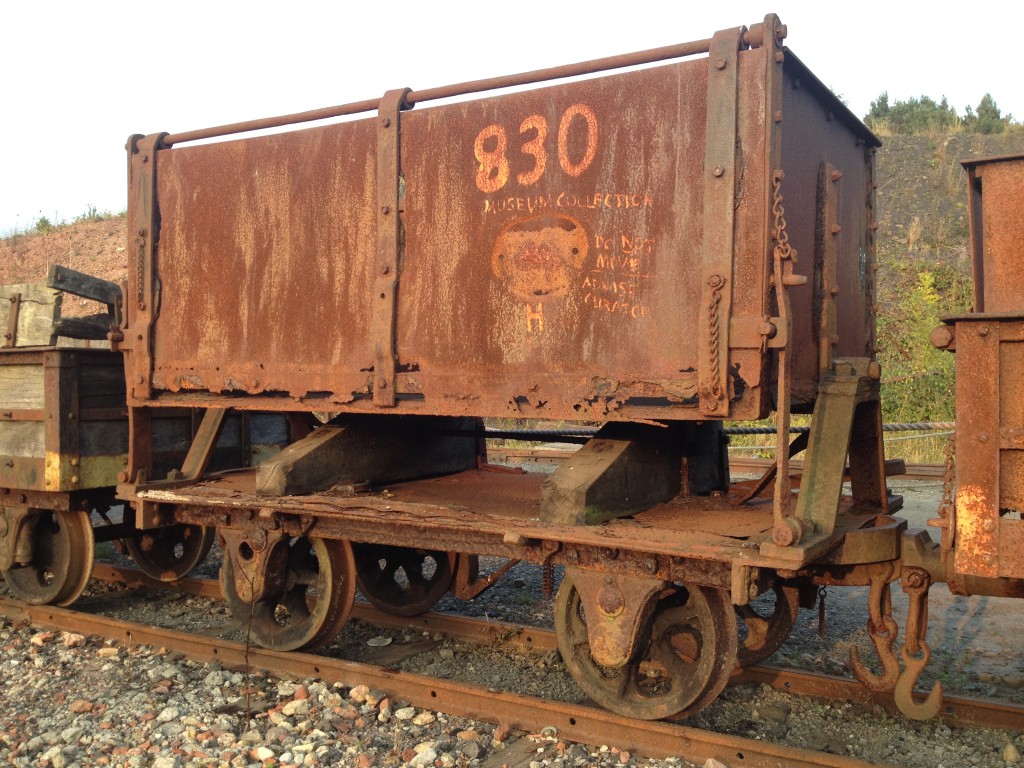 Below: After restoration. The work has been entirely completed by volunteers, including some staff working in their own time. 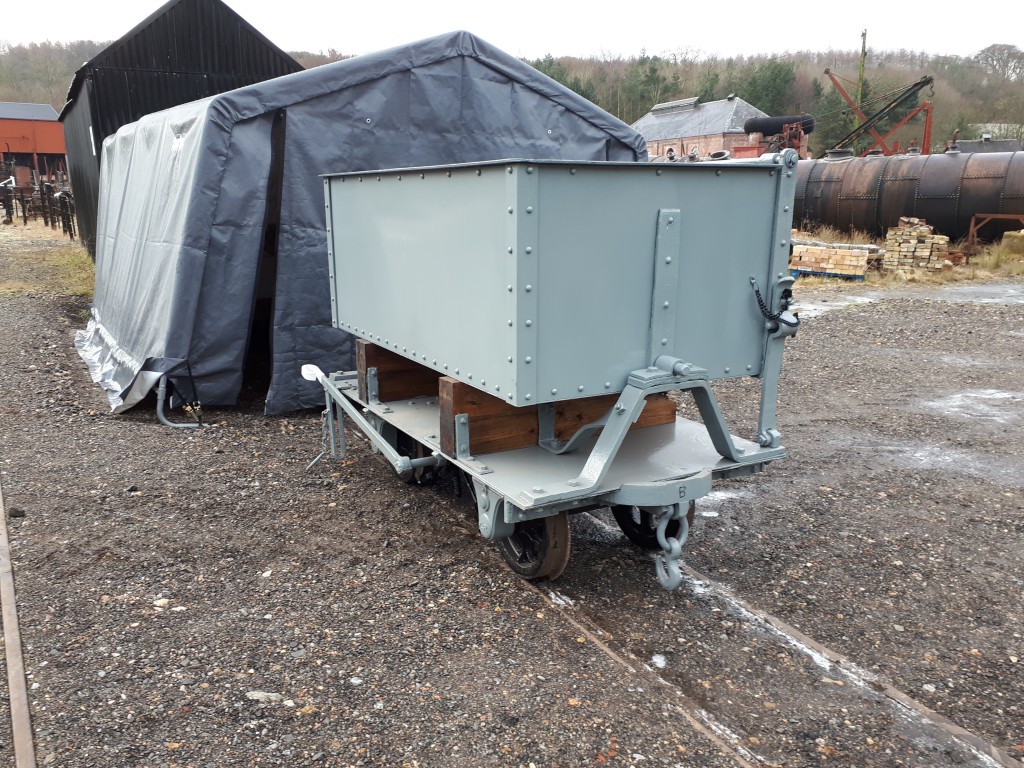 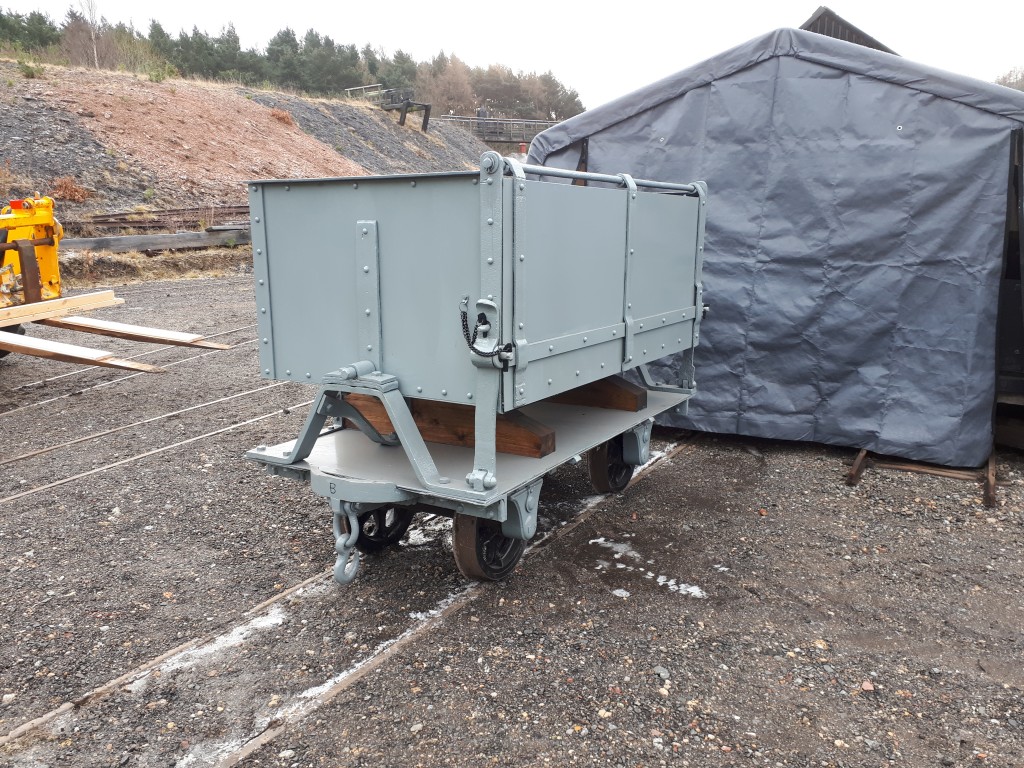 The second tipper (848) is next in line. This is in good mechanical order having been restored by the FR about 15 years ago. We have the wagon on short term loan and in return for this we are bringing the cosmetic appearance up to the same standard as 830. Whilst they are not an exact pair, they will look excellent together.

Below: 848 is seen here with the wheelsets, brake gear and axleboxes removed. This will be grit blasted and spray primed before being brush painted to match 830. 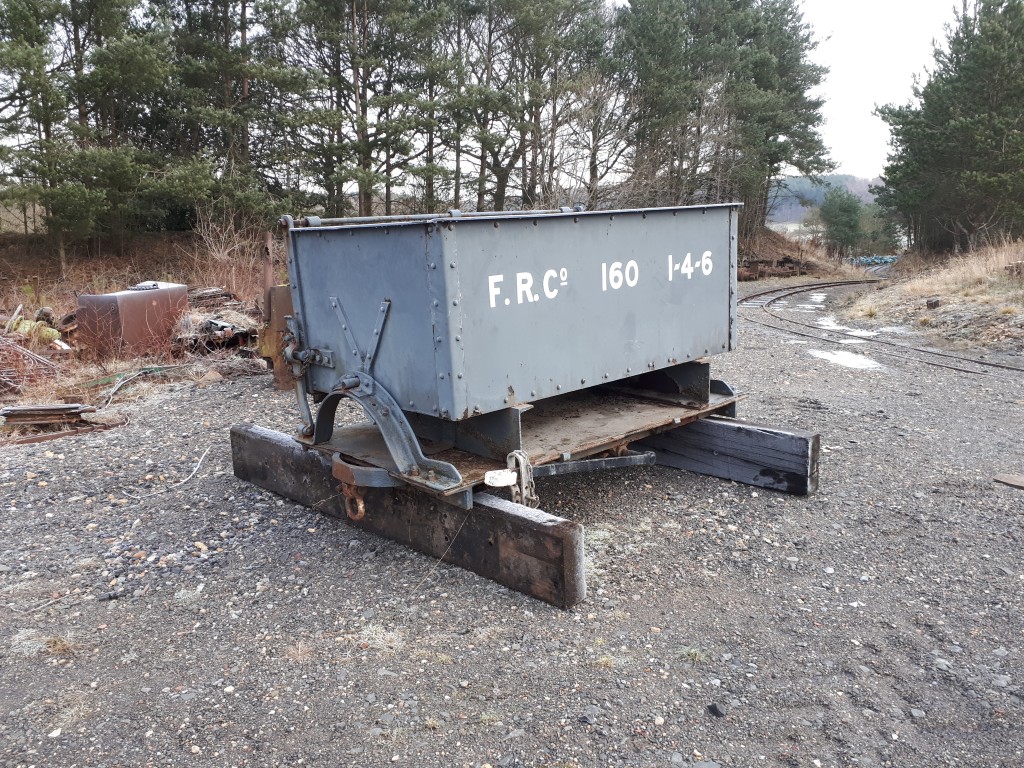 Below: 848 is seen part way through the blasting process 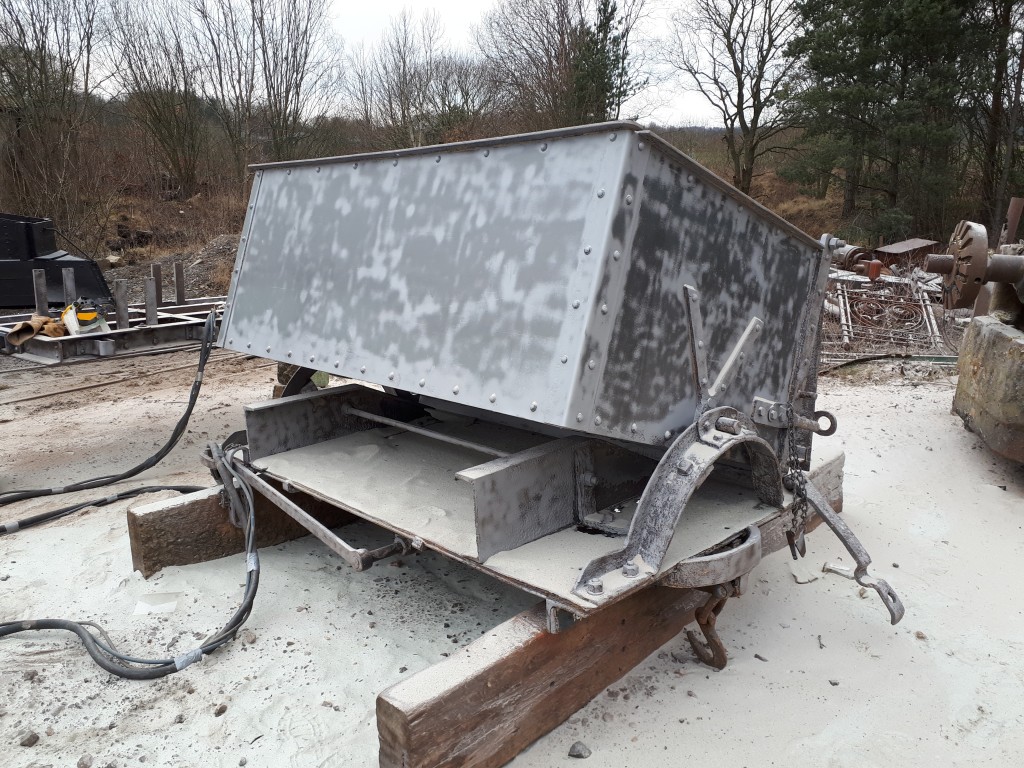 The coal wagon (26) has been largely complete for some time. Its rebuild was speedy and benefitted from some apprentice work, this being a good project to see right through and practice their skills. It has been painted in the paint shop at the same time as the brake van. Again sign writing will take place in the next few weeks.

Below: 26 complete and outside for the first time since painting. Shed space being at a premium on the Narrow Gauge line, 26 will temporarily live in the dual gauge (though not rail connected) store shed. 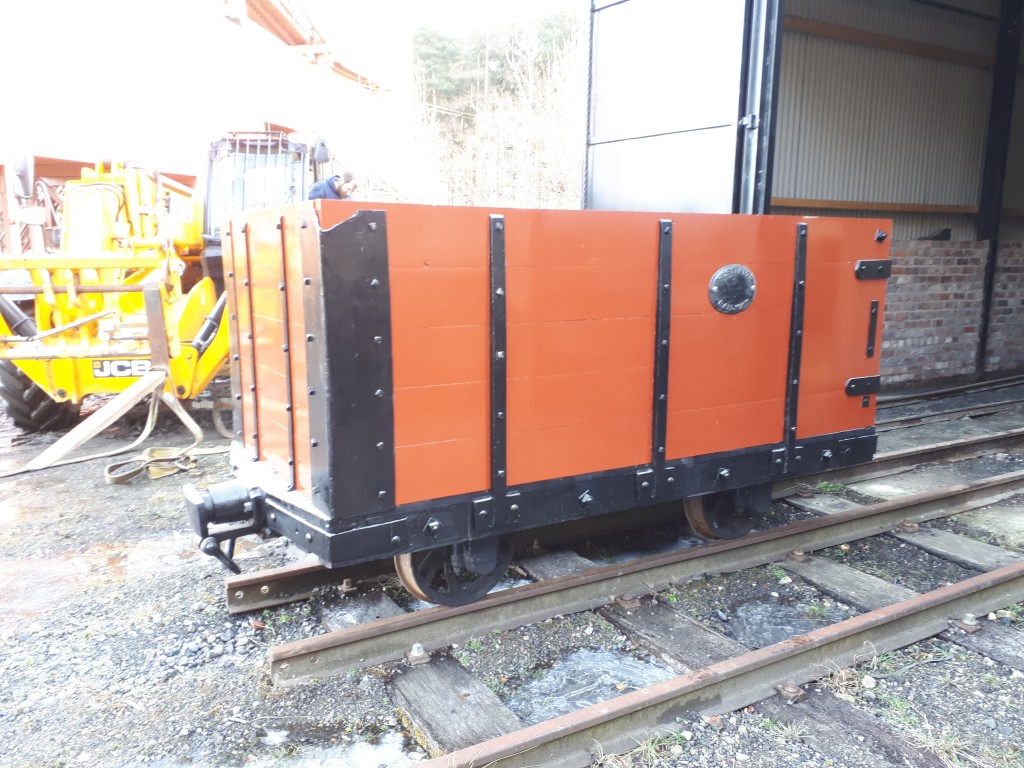 Below: B2 seen with stanchions removed and loaded with the steam winch. 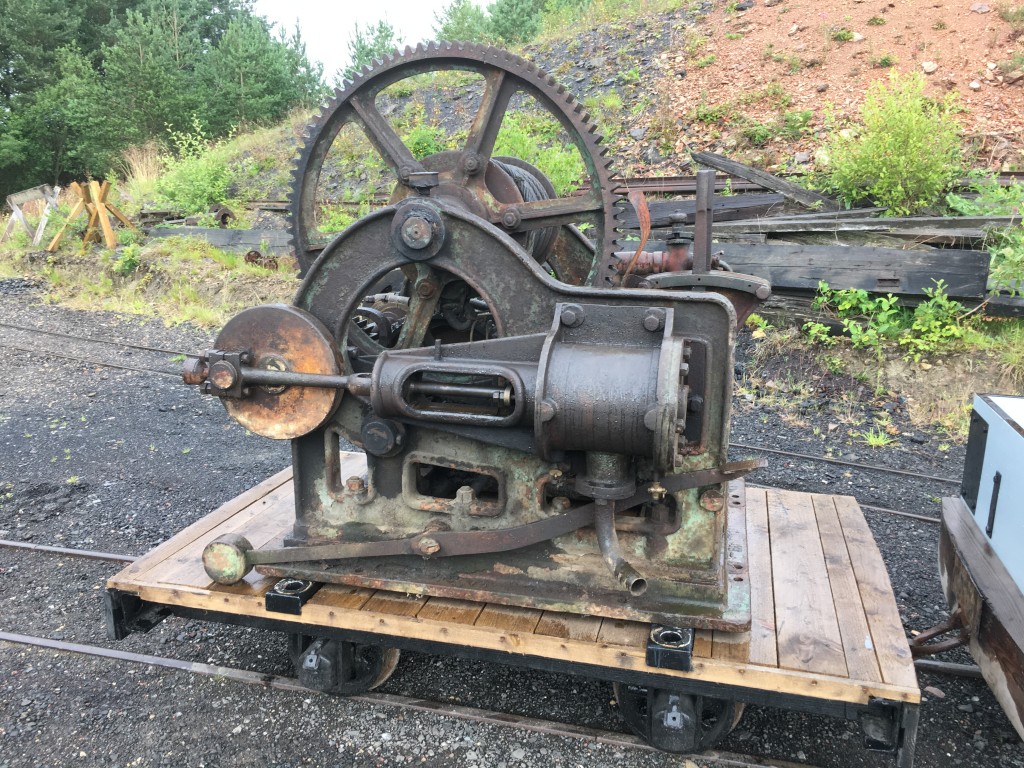 At the GNSF this year we will need the ability to transport water to the Pockerley end of the Narrow Gauge Railway. After some thought and sketches, we have decided to use two barrels. They will sit on a frame that locates on the bolsters and can be tied down through the stanchion sockets. The barrels will be plumbed together forming a suitable water carrier. At future events the frame and barrels could be moved pretty much anywhere to give a loco or traction engine a water supply remote from running water.

Below: The two barrels loosely placed on the flat wagon. 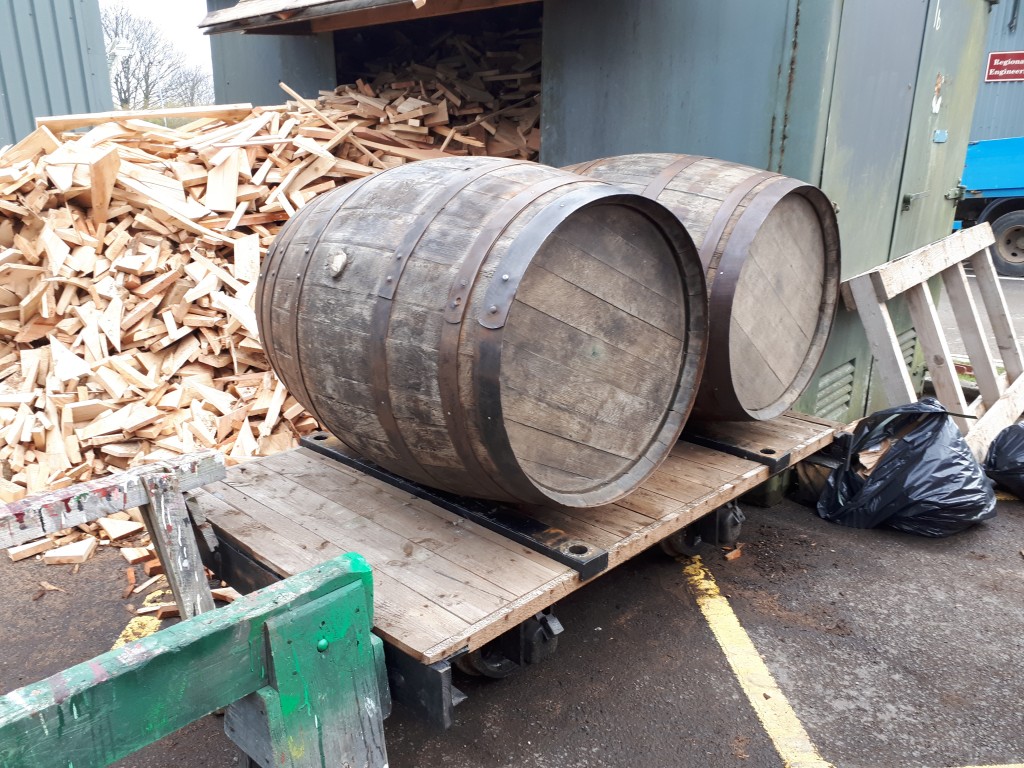 Hopefully the six remaining weeks provide sufficient time for us to complete the various pieces of work to deliver another good event. Once we have a bit more certainty on what motive power we will be using to shunt all these wagons we will of course update the blog.