Looking at all of the news coverage this week, it certainly feels we’re hitting our stride again, with work very near pre-pandemic levels once again.  A reminder to readers too, that tomorrow is a Coffee Pot running day, with Glyder also being steamed to shunt the narrow gauge railway and put stock into appropriate locations for the winter.  The narrow gauge Wellington coach has been moved to the Waggonway for display (and some interpretation around the story of the original, standard gauge, coach) and in due course we will move the Pew coach to the workshops for attention to its varnish and the damaged floorboards.  There is a lengthy and extensive plan of storage moves that we will commence shortly – we are now reaching a point where so much is stored in workshop areas, that it is having an effect on our ability to work in these spaces.  A cunning plan has evolved and it will be rolled out over the next 18 months or so in order to ready us for future work, not least the accommodation and maintenance of the trolleybuses later on.

During the lock downs, it was a great distraction to be able to assist the team from Accurascale with their research into the Londonderry chaldron waggons, ahead of a new model that they are now adding to their growing range.  They have managed to encapsulate a significant number of variations within their model tooling, and are therefore presenting a wide range of chaldron models to the modelling fraternity.  We steamed No.18 for the launch filming, and this can be seen in the Hornby Magazine video that accompanies the launch.

Here is the link to the Accurascale announcement:

And here is the video, with some nice shots of No.18 and the chaldrons, and a reminder to me that I really need to sort out my period costume as I look seriously scruffy!!!

News from the workshops…

Below: The Fordson radiator repair (restoration) has now bee completed with the tank fitted and the radiator ready for painting and re-fitting onto the tractor.  This work entailed a new bottom tank, as well as the machining work needed to turn the raw casting into a replica component to restore the tractor to operation. 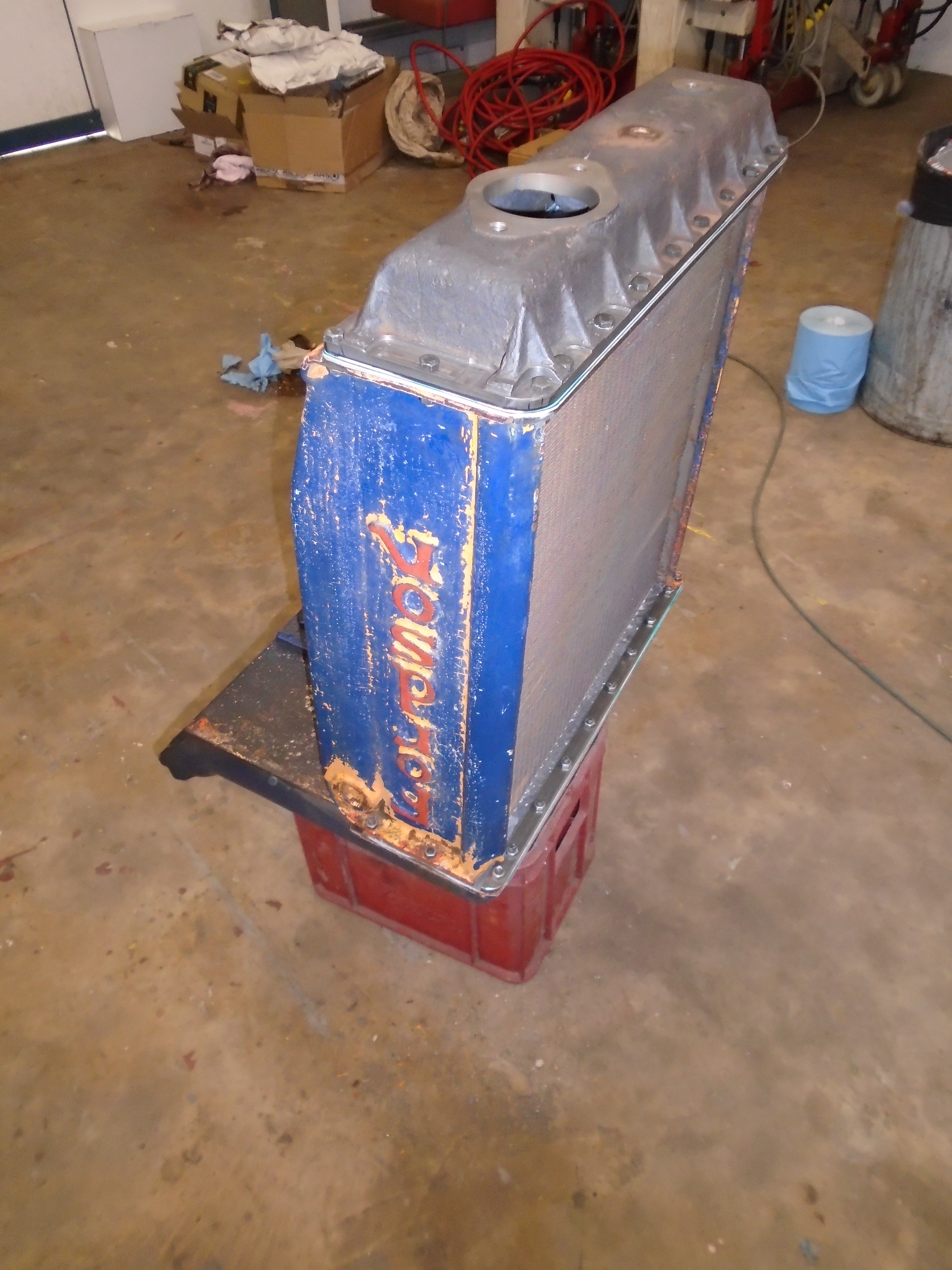 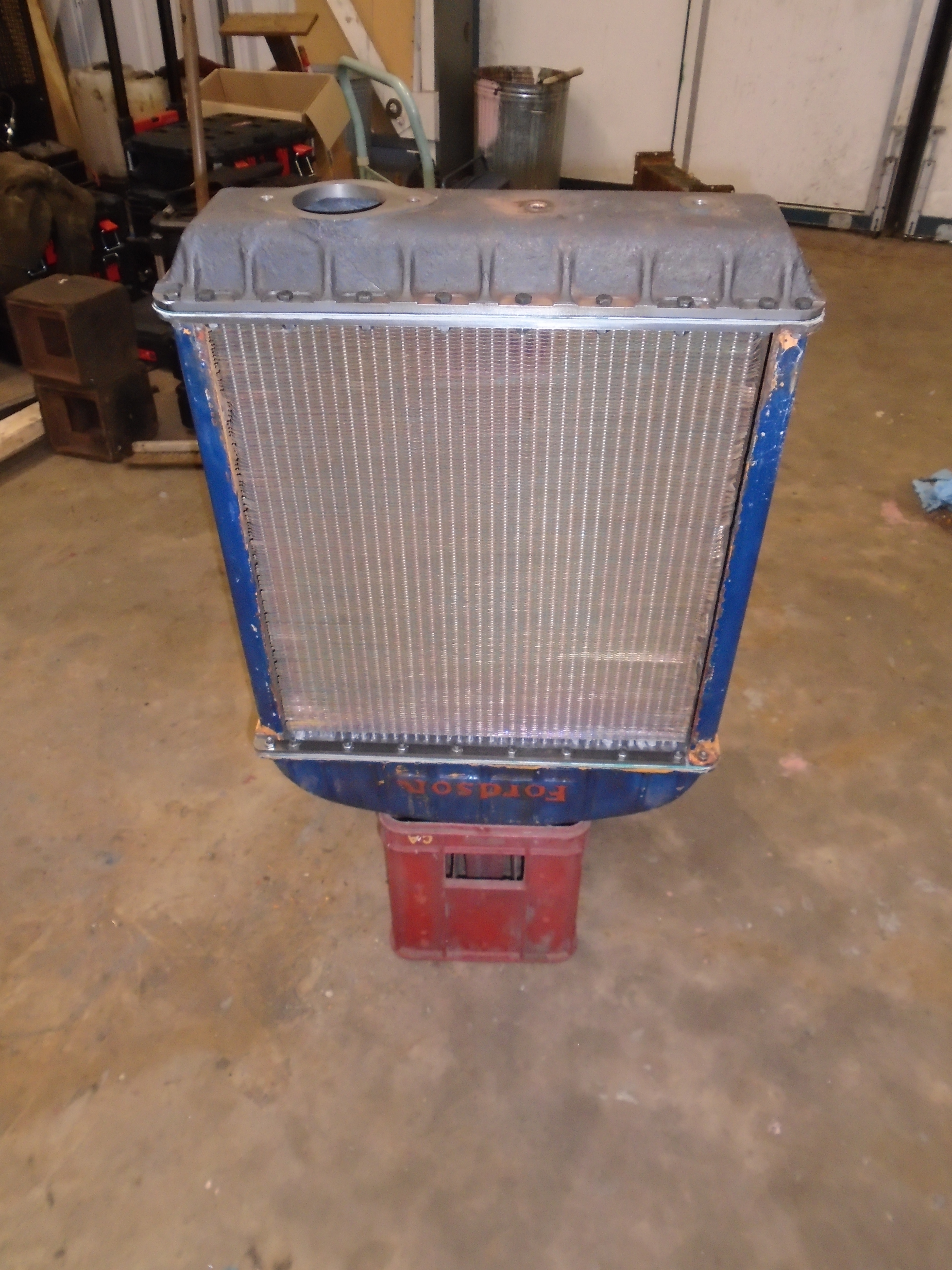 Below: Darlington 4 has been driving around looking rather like its been in a fight.  One of the radiator grill rails has become detached, leading to a rather lopsided look with a missing tooth!

The grille is fibreglass, and had suffered a poor repair in the past. Access to the rear of the grille is limited by the actual radiator. A new strip has been made in aluminium, with tabs to locate it in the rest of the grille, when will then be secured using a resin compatible with the fibreglass. Once painted, the join shouldn’t be visible. 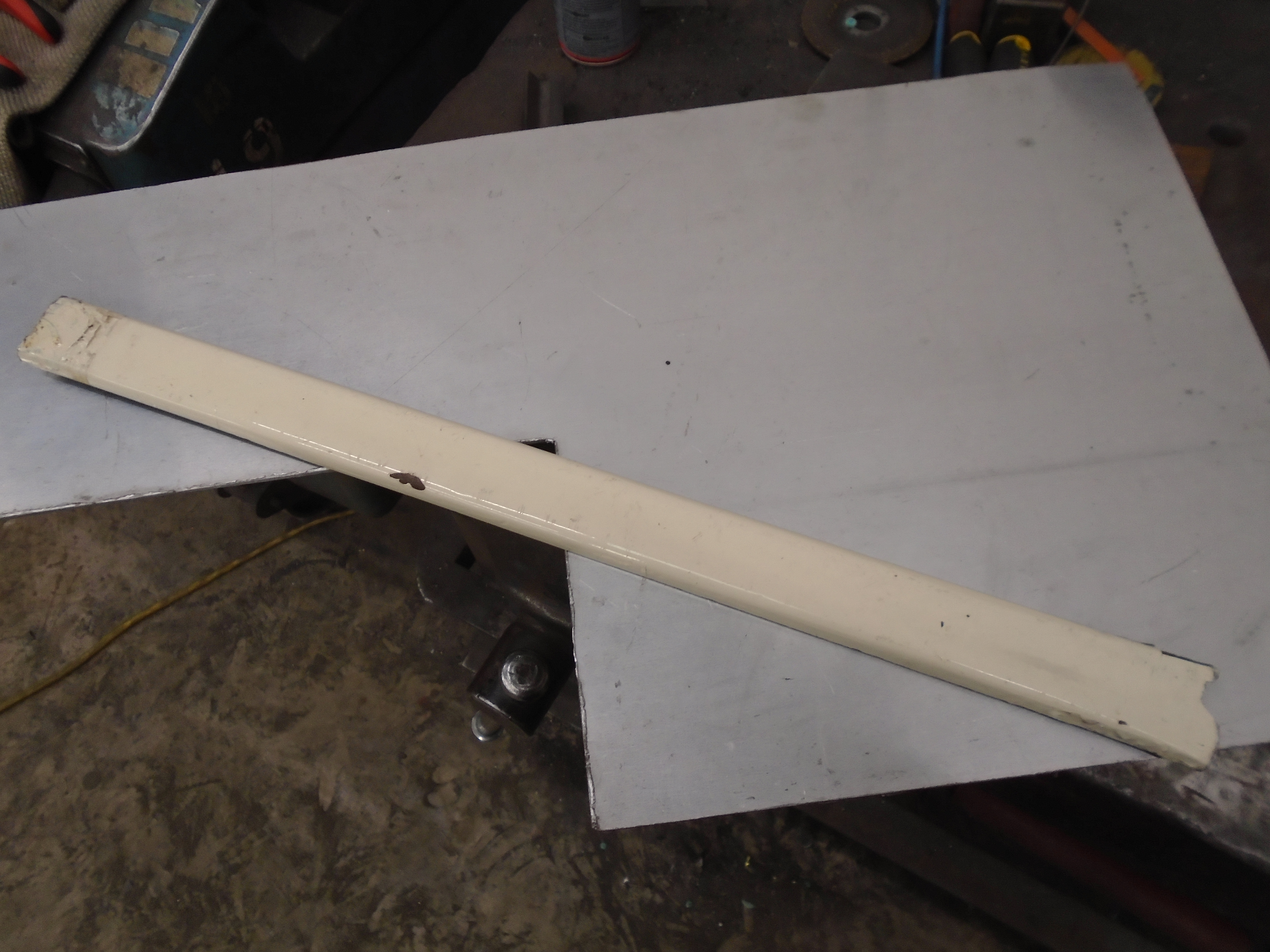 Below: The replacement strip in position.

Below: Another set of horn faces ready to fit to Gateshead 10 – these will be finally fitted, as there will be no further need to remove them – a good sense of achievement for the team as the bogies start to come back together. 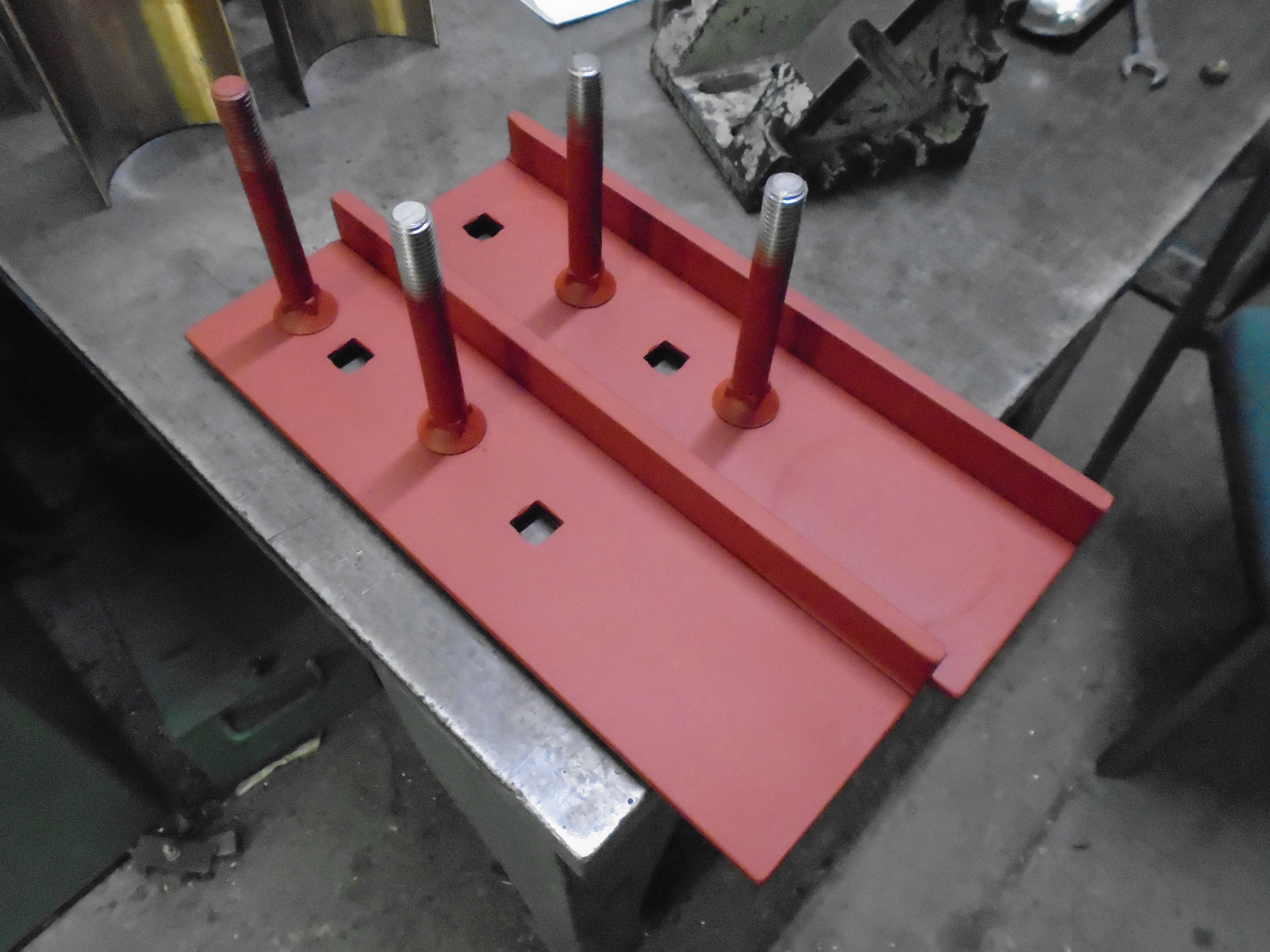 Below:  The mobile column lifts have been commissioned. These were bought second hand from Go North East when their Stanley depot closed. Having been serviced and LOLER inspected they are now available for use. These can be used anywhere on site where there is a flat, level and solid area, and each corner can lift 5500Kg. They will see most use in the bus depot workshop for smaller vehicles, though they are capable of lifting the largest vehicles in our fleet. We have another set, which will similarly see use in the fabrication workshop where welding work is required under vehicles. The first vehicle to be lifted is the Landrover which needs quite a bit of work, some of which is necessary through wear and tear, and some through energetic use.

The plan is to have the vehicle ready for winter as it is a good vehicle to tow the gritter. Here it is seen on the lifts, at full elevation for photo purposes, then brought down to a good working height. When at working height, axle stands are positioned at diagonal corners (small vehicles, due to space constraints) and all four corners (large vehicles). This is an additional safe guard against lift failure whilst working on the vehicle, which is extremely unlikely. The lifts are hydraulic, and have mechanical locks (much the same as a passenger lift), which stop them falling in case of hydraulic failure.  The lifts are a significant step forward in terms of our maintenance capability, and we acknowledge Go North East’s generosity in making the two sets (and ancillary equipment) available to us at a very reasonable cost. 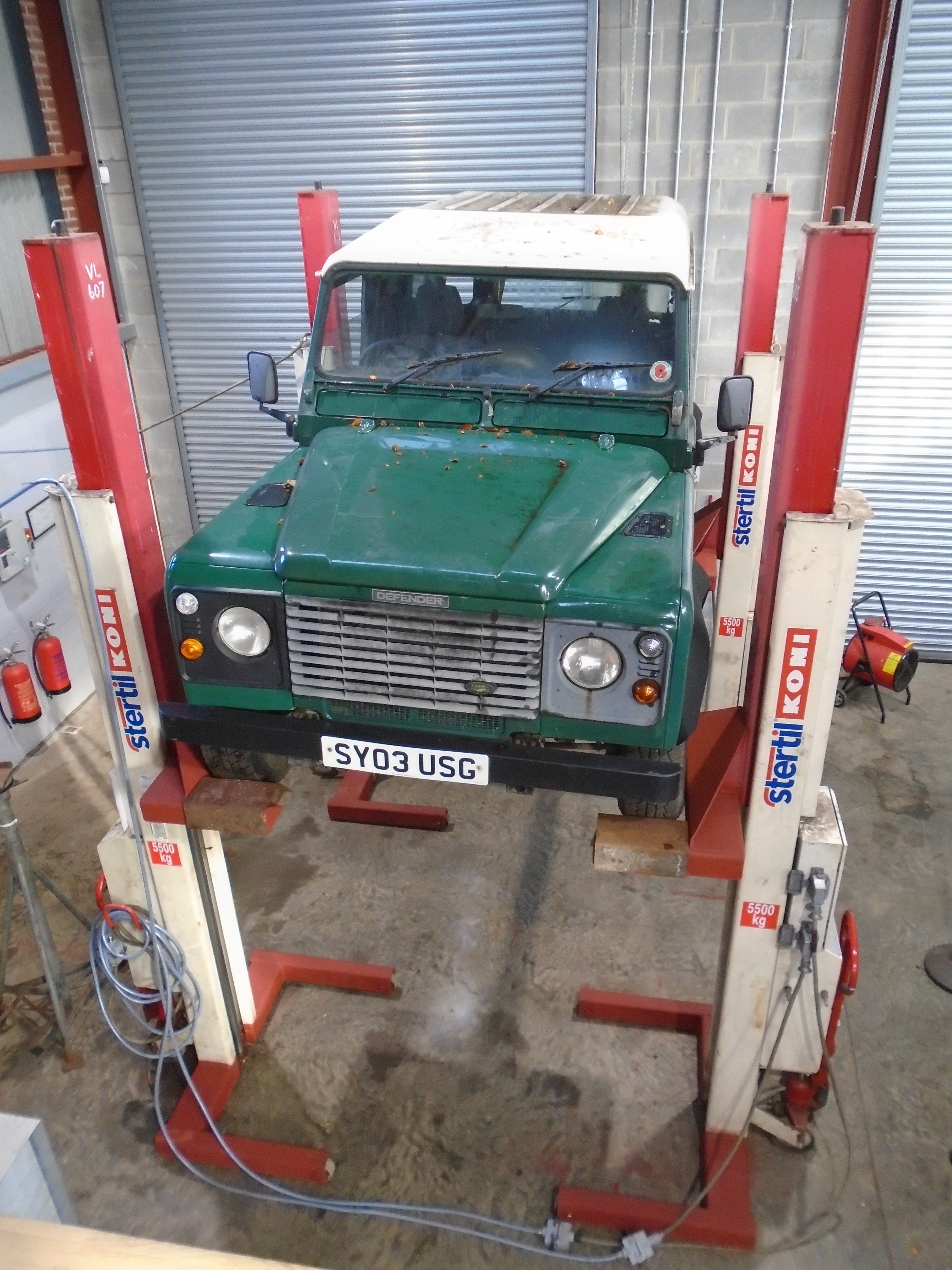 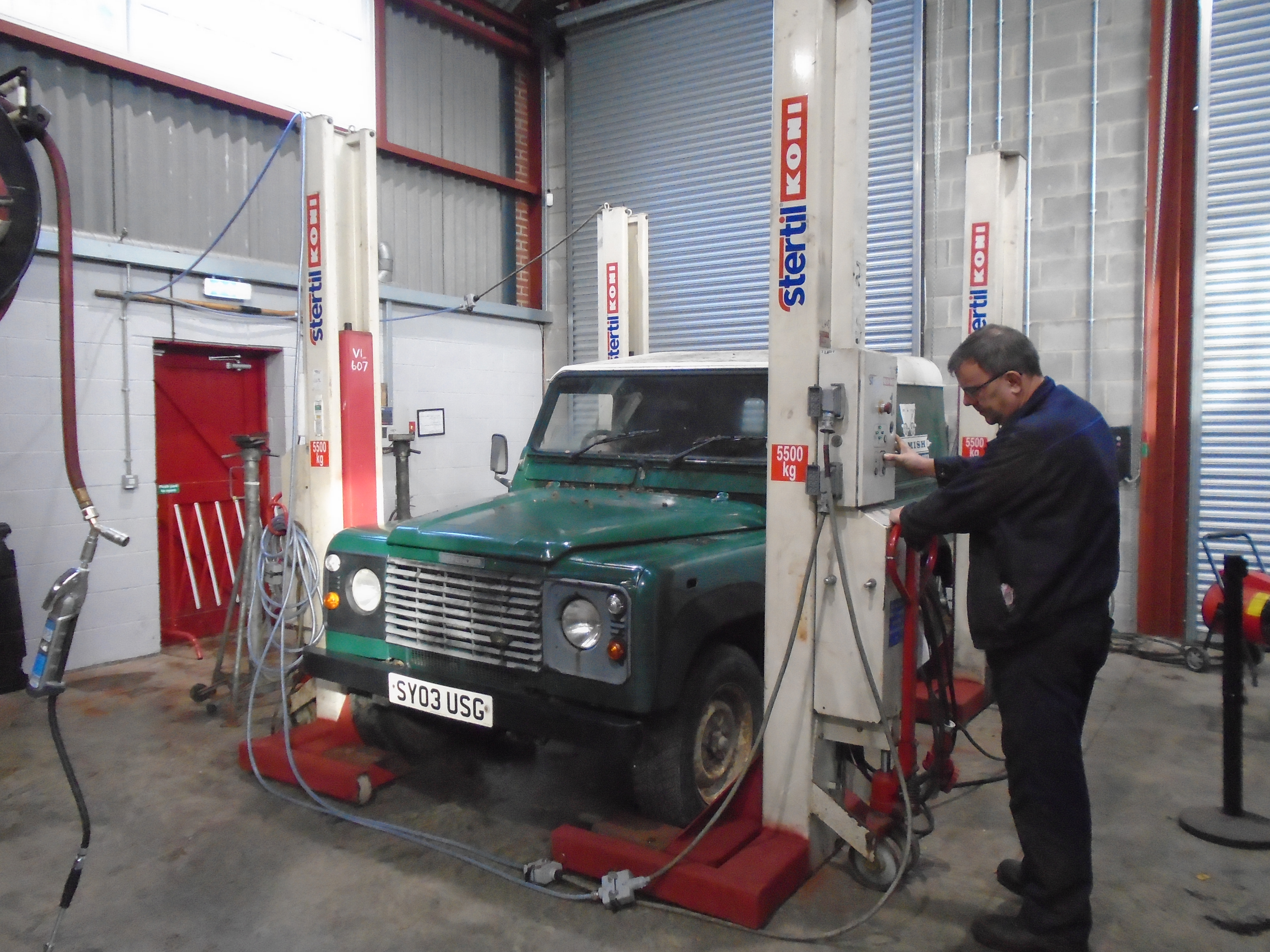 Below: The partial repaint of the B-Type bus has been completed.  This work centred on the top deck and passenger contact points.  In due course, the exterior will receive further treatment to spruce it up now that it is mechanically in far fitter condition than it has been previously (with much of that work centred on the gearbox/clutch as previously reported). 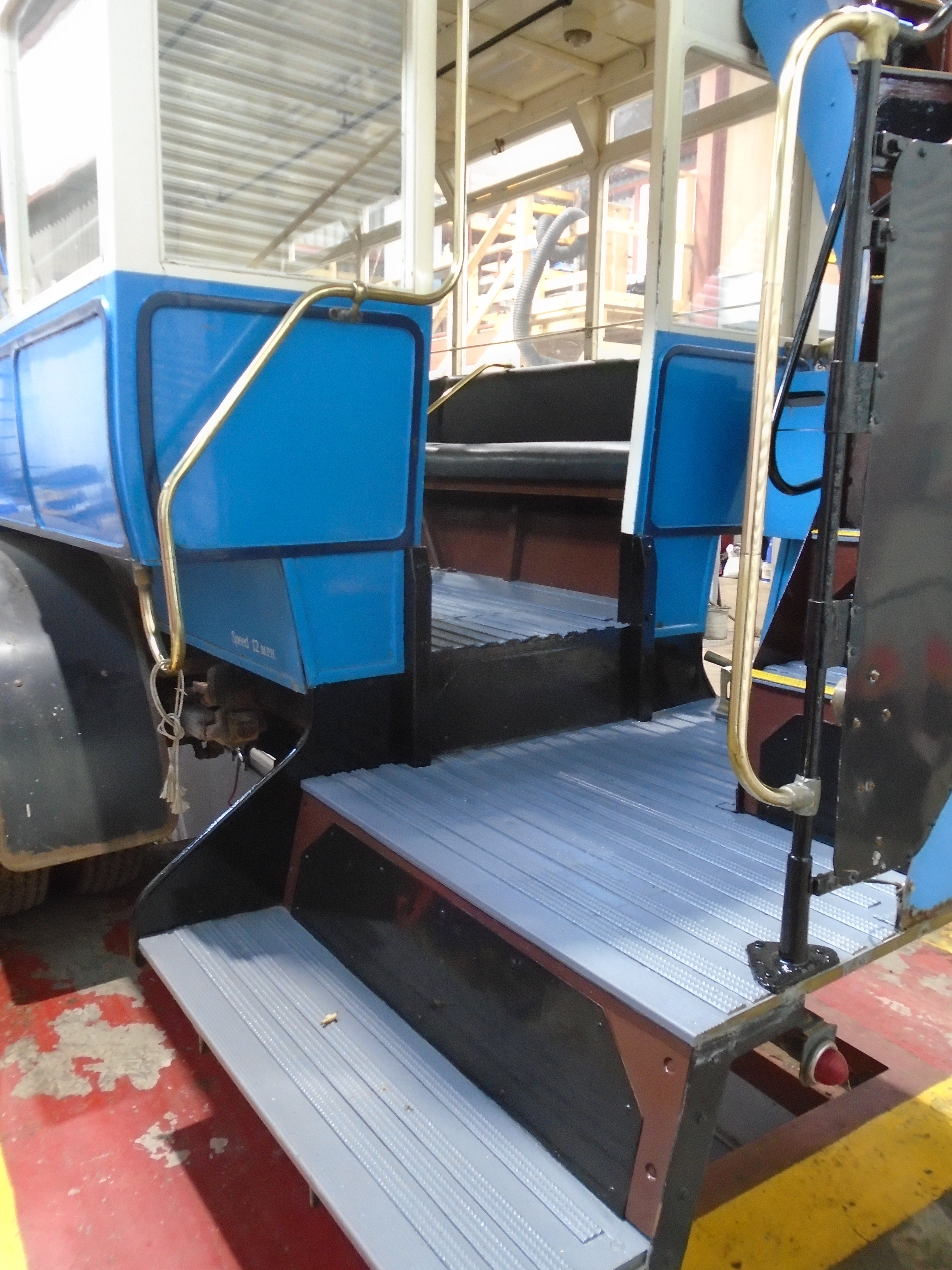 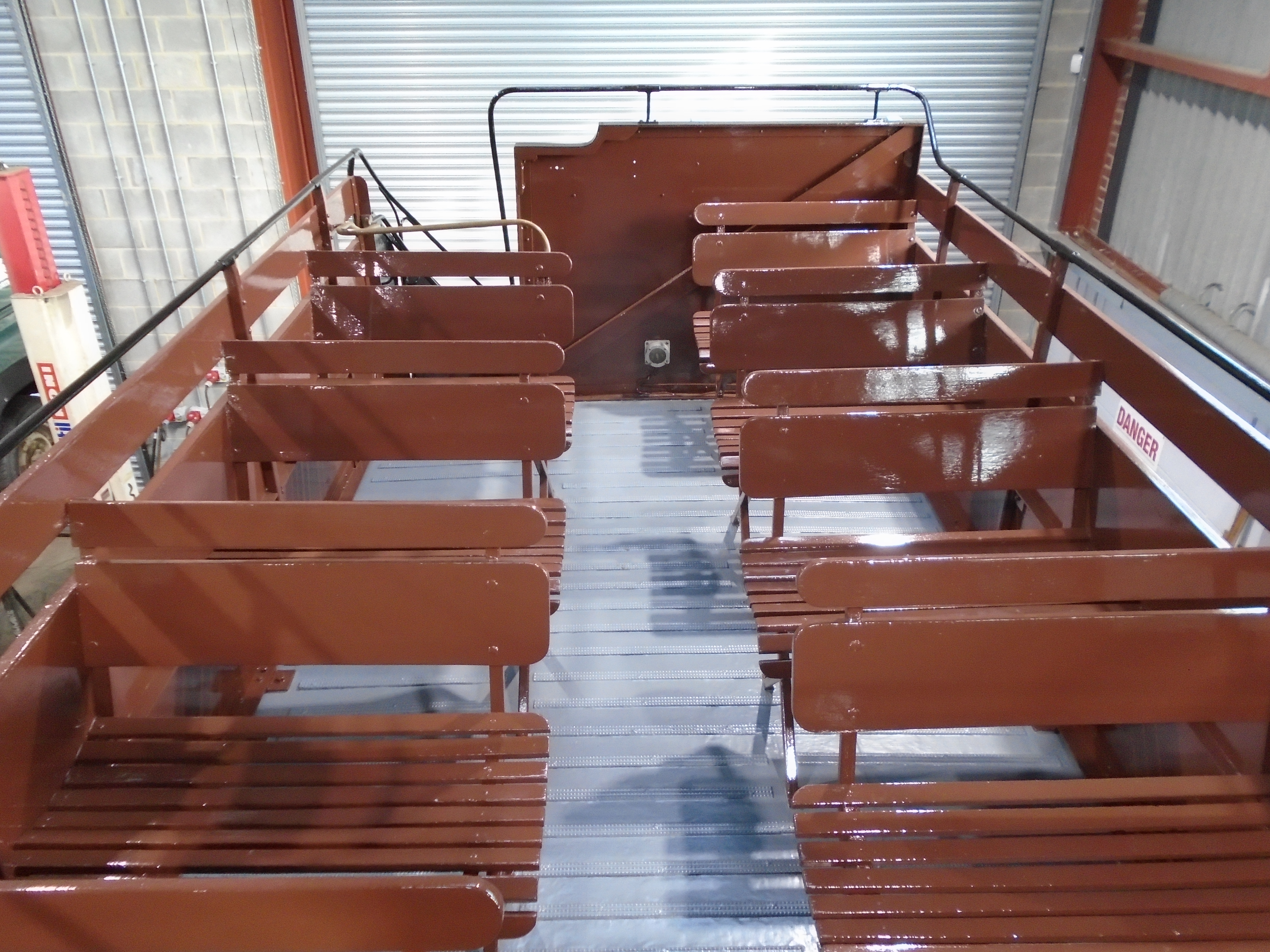 Below:  Rebecca has now moved onto the Daimler Replica bus to complete similar work. The top deck seats have been removed. The floor and edges have been painted.

The have been taken to the paint shop to enable more convenient (and warmer) working. The photos below show the process – with seats sanded back ready for paint and varnish, metal work undercoated, and woodwork varnished.  Finally the metal work is painted in black, and further coats of varnish added to the wood.  As with the B-Type, the handrails, staircase, and lower saloon floor will receive attention. The lower saloon seats will also receive the sanding back and varnishing treatment.

The bus won’t see passenger service at the bus running day, but will be able to be moved around the depot area for photographs. It’s not obvious that the top deck seats are missing from the ground! 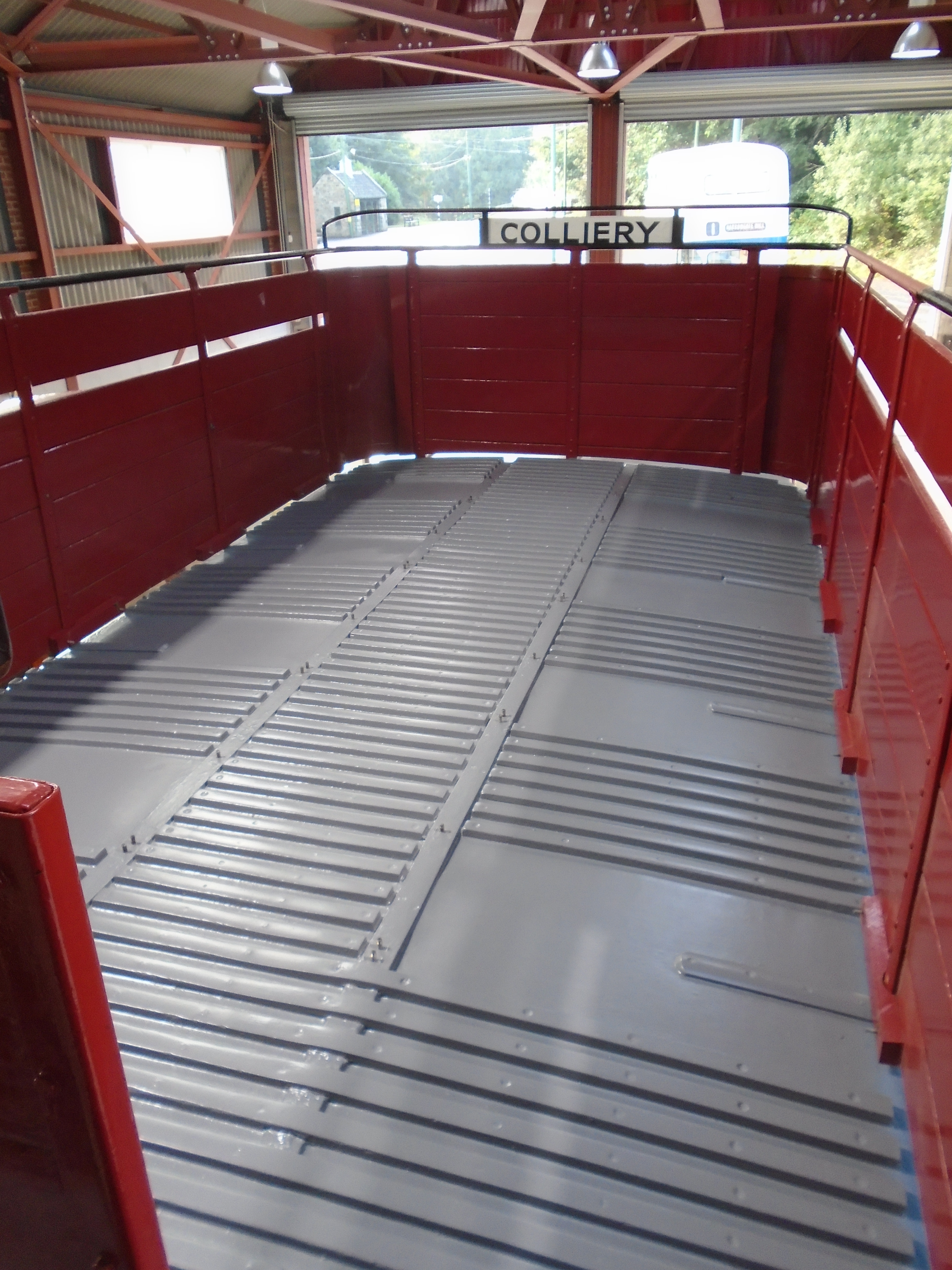 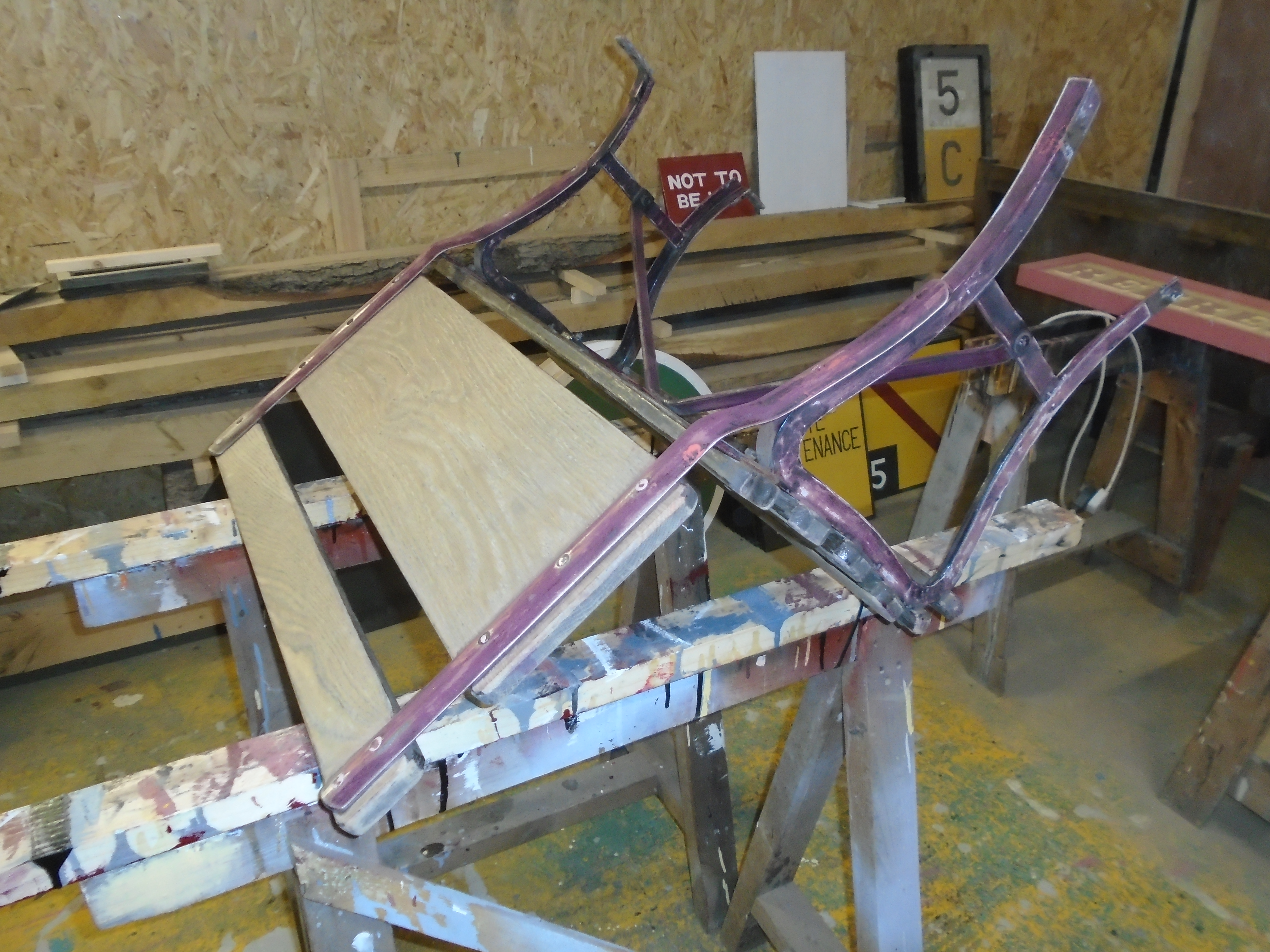 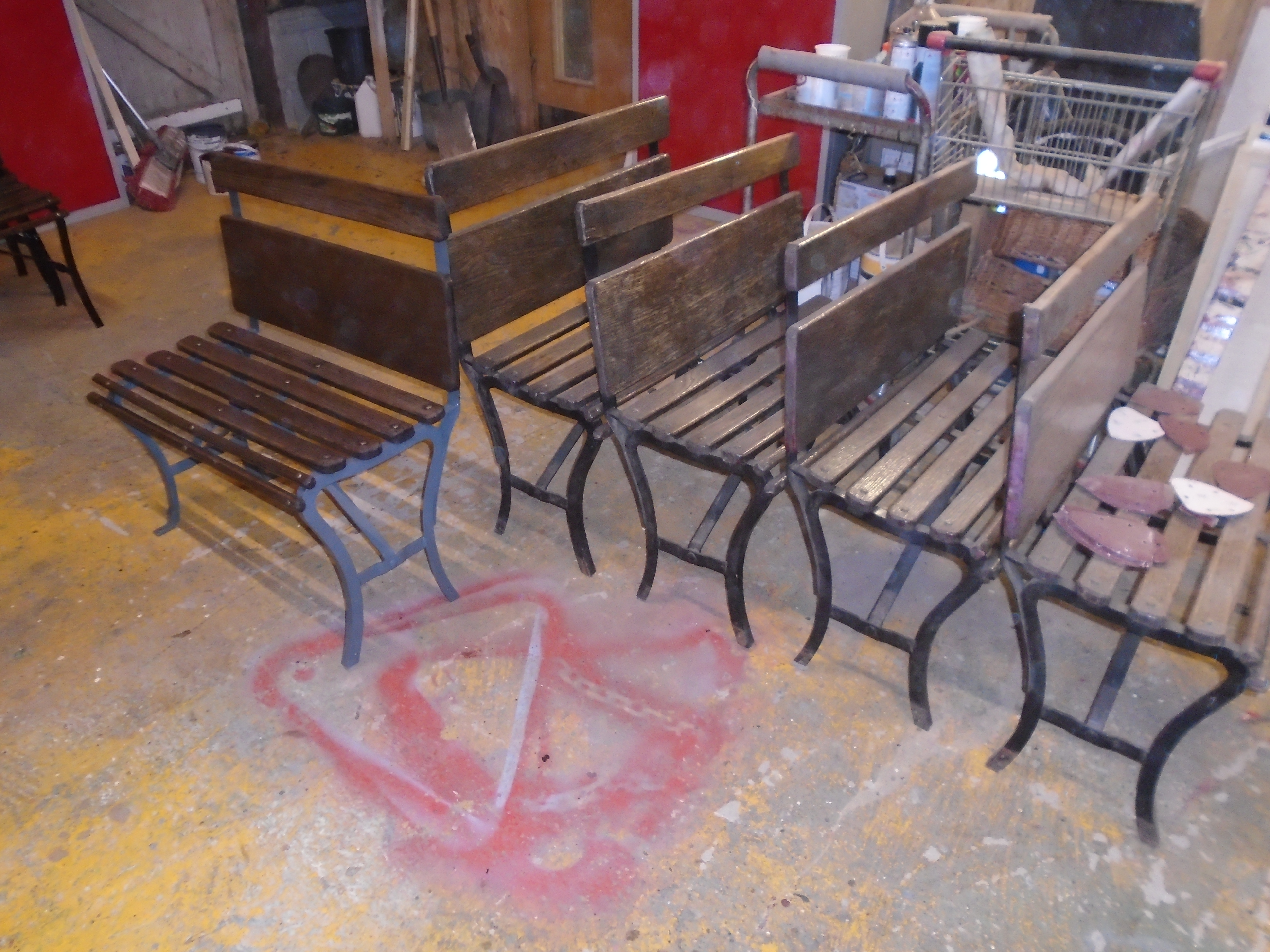 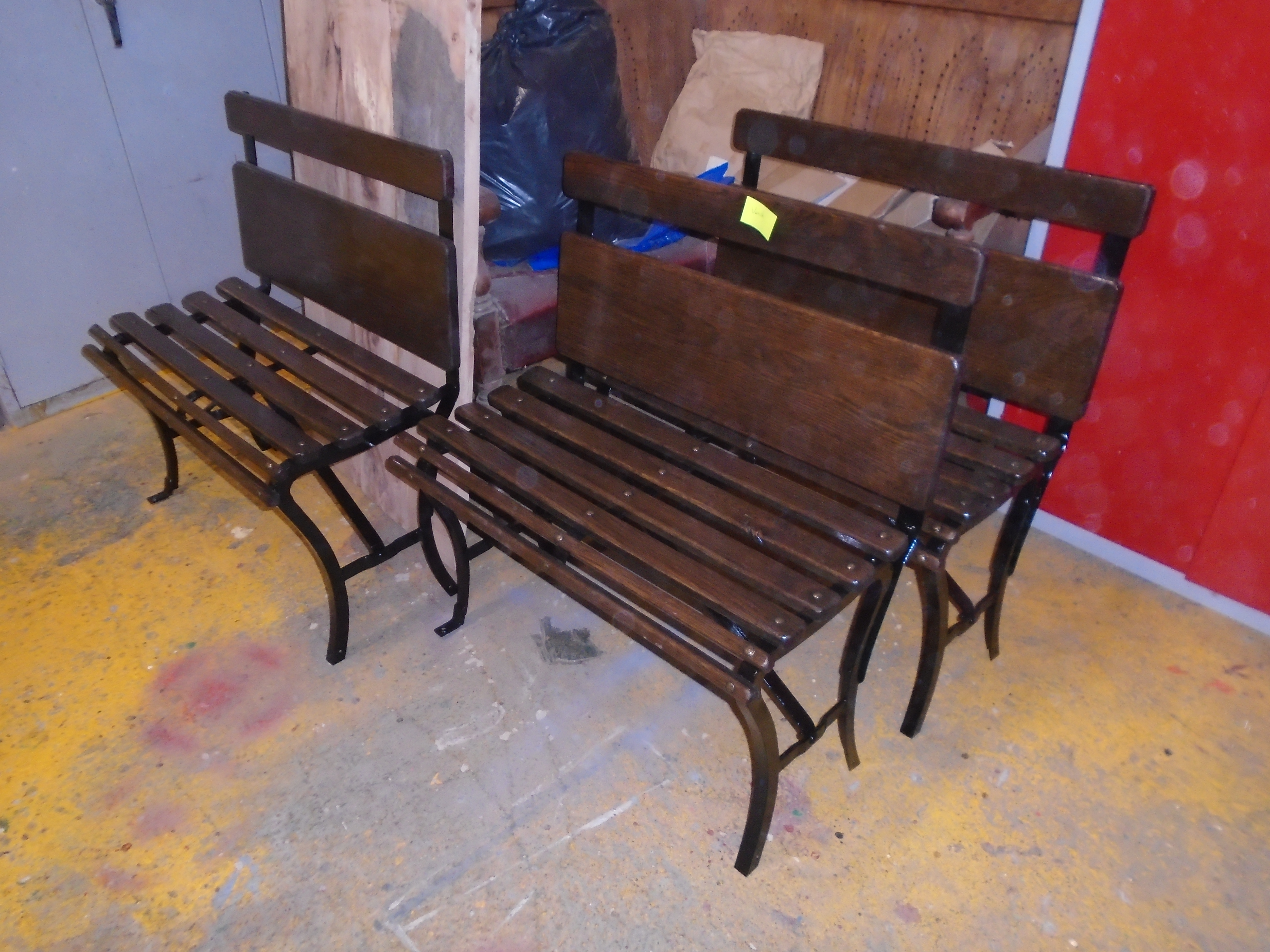 Newcastle 114 is now available for traffic following reassembly and recommissioning.  Readers may recall the tram was the recipient of a motor overhaul just before the first lock down was announced, and so the work to complete this intermediate overhaul was delayed until now.

Below:  This view shows one fo the motors being hoisted into position.  The motors are placed into the pit, then lifted up into position using a gantry frame assembled inside the tram.  The removal of the floor hatches grants access to enable installation.  The motor suspension bearings also had their thrust faces skimmed prior to the lock down.  The motor has to be lifted to clear the axle onto which it is fitted, then lowered so that the journals (the two bright areas seen at each side of the motor) sit onto the axle. 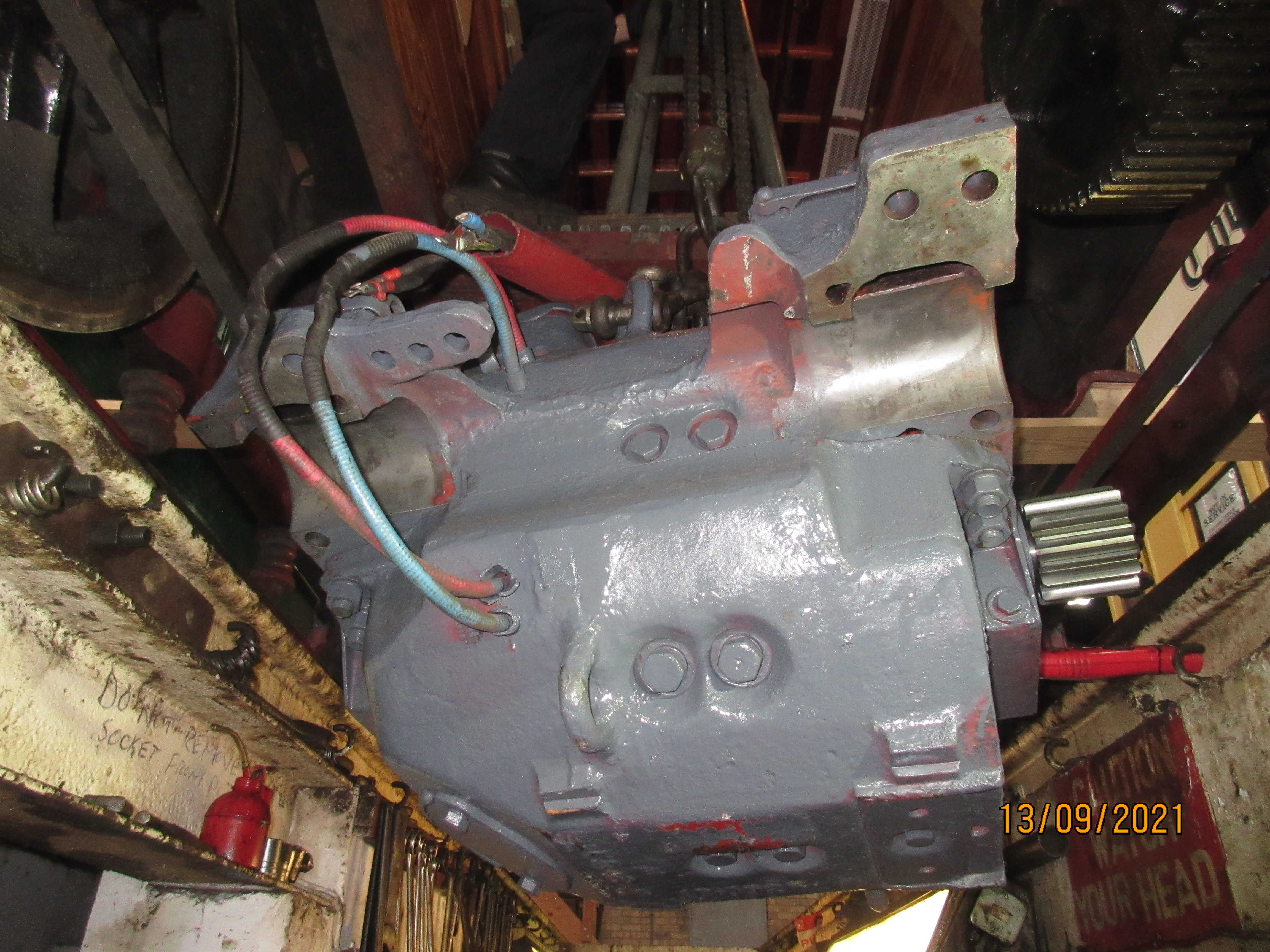 Below: With the motor now seated in place on the axle, and the drive pinion meshed with the gear on the axle, the bearing caps can be fitted and the motor wiring reconnected.  This is the first motor, at the No.1 end, the second axle, sans motor, can be seen behind (towards the bottom of this view). 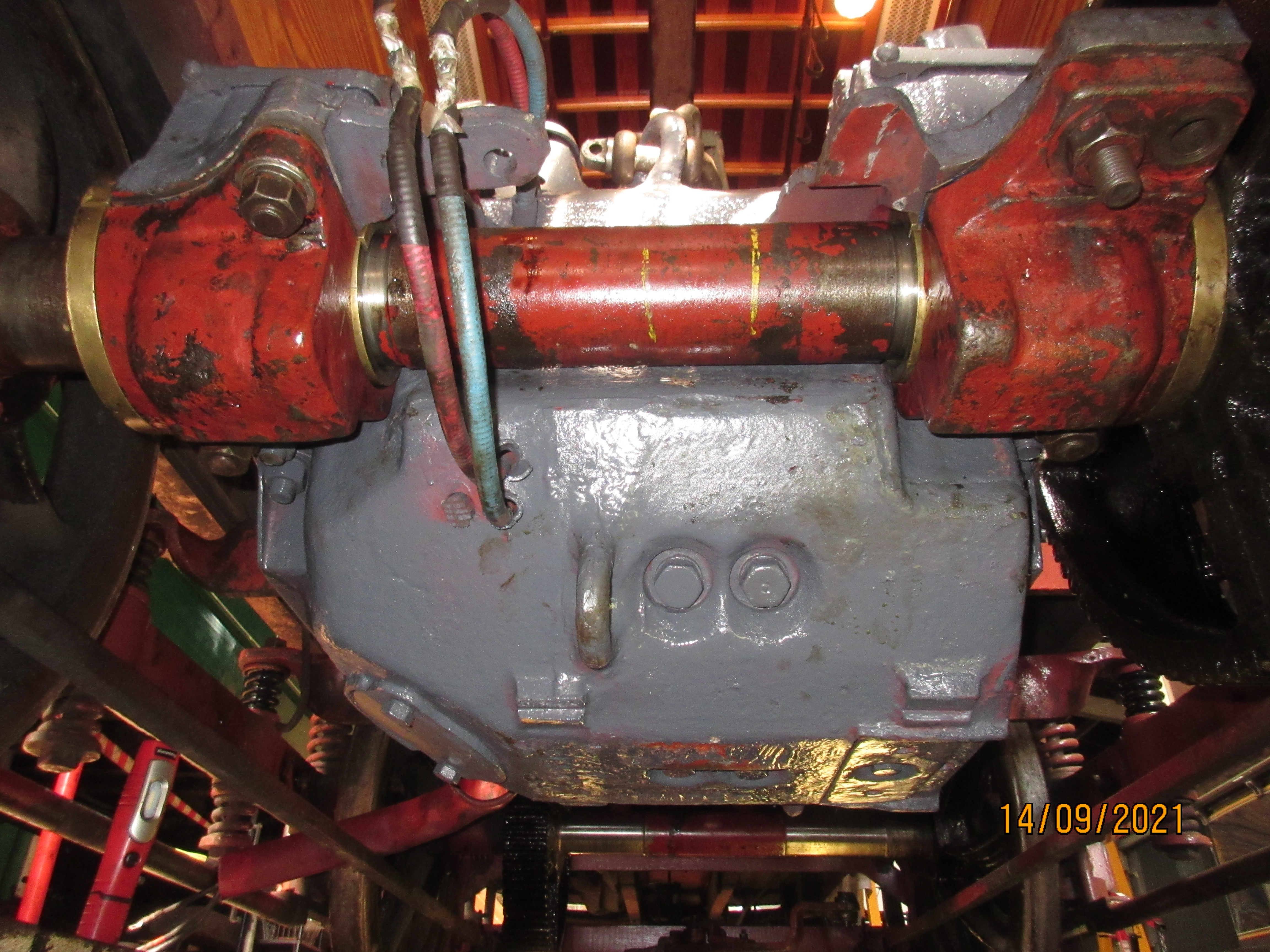 Below: Following the completion of work, 114 was then tested ahead of each day’s opening.  It was then signed-off for traffic, just as the monsoons arrived this week!  These photos were taken by the fitting staff, Ian and Brian, who have a camera to record the work they carry out. 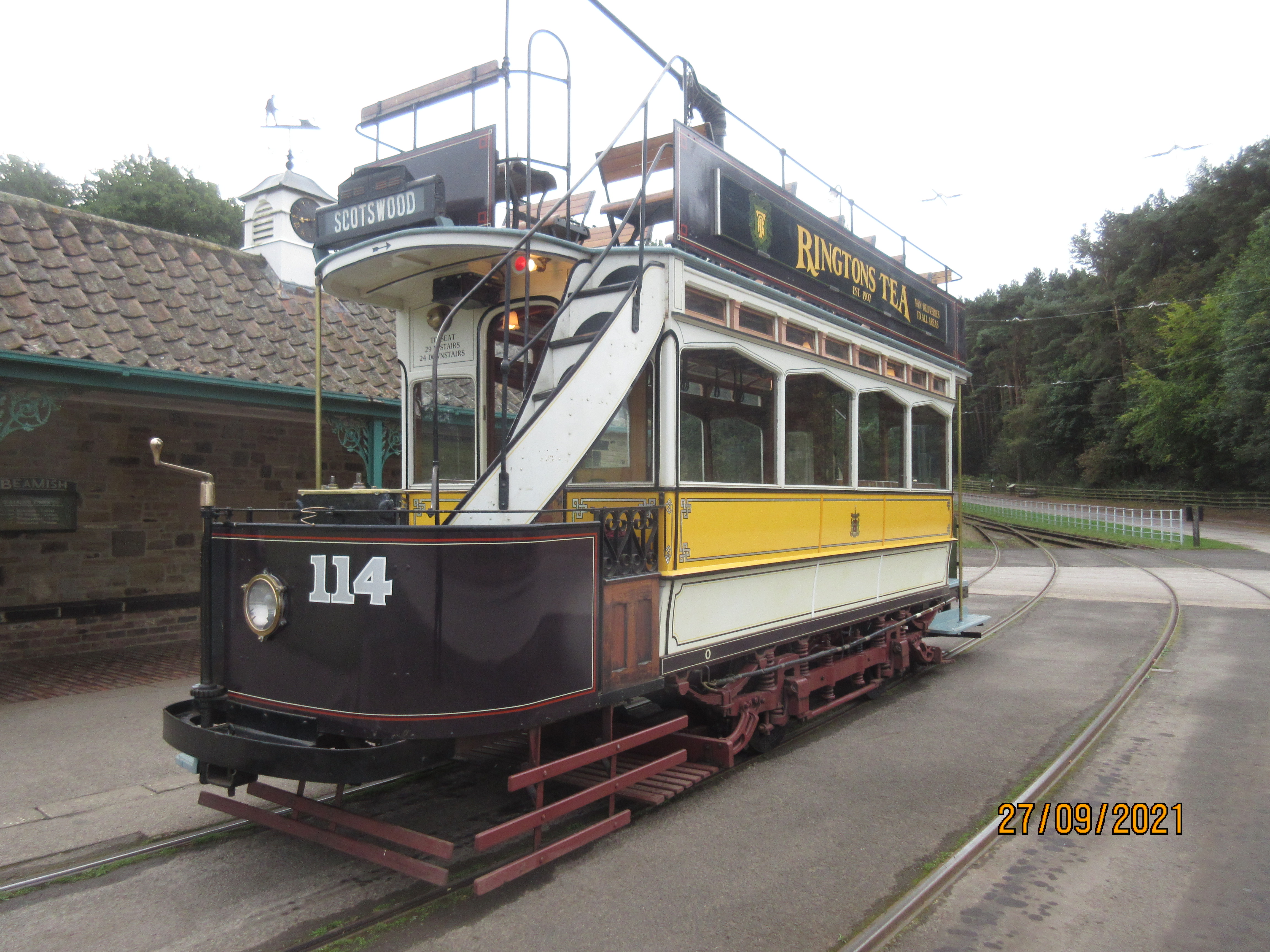 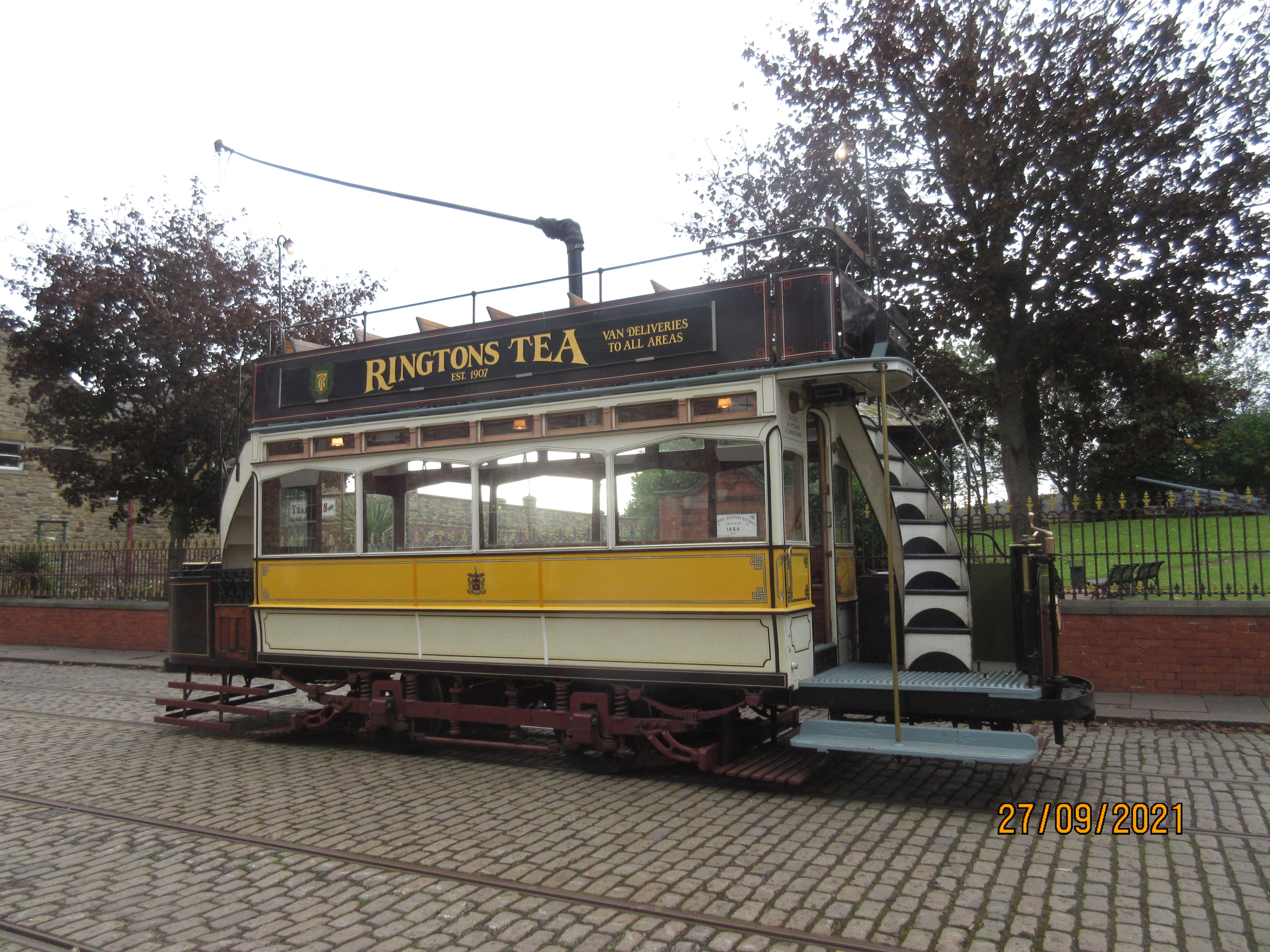