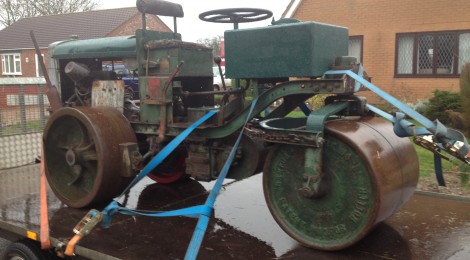 Part 2 of this occasional series closely follows Part 1 where we looked at Beamish’s Barford & Perkins D4 roller of 1925, R025.

In this installment we meet my own roller, another Barford & Perkins machine of the A Series, 2 1/2 motor roller Ref:No.EE067. I purchased this 2.5 ton pavement roller in January 2014 after a lengthy quest to find a suitable machine.  I wanted a B&P variant, around this size and in pavement configuration.  A range of grass rollers, A3 Series, was also offered and many have survived as cricket pitch rollers, often modified, sometimes extensively.  Aveling Barford continued manufacture of this Series of rollers right up until introduction of the Grantham series (the GA being the familiar replacement) in the late 1940s.  The grass A3 Series had been launched in 1915, with WW1 interrupting development of the A Series, which appeared in 1918.

Below: As collected, EE067 was in running order and had originated in Norfolk before its previous owner moved it to a village near Skegness.  Largely original, and complete with water tank, the engine had been replaced at some point with a Morris 1000, including its gearbox.  As a result the frames had been extended to the rear, the radiator re-mounted and the whole engine/gearbox inserted and connected to drive into the B&P reversing two-speed gearbox.  It was quite a neat job and also included electric start! 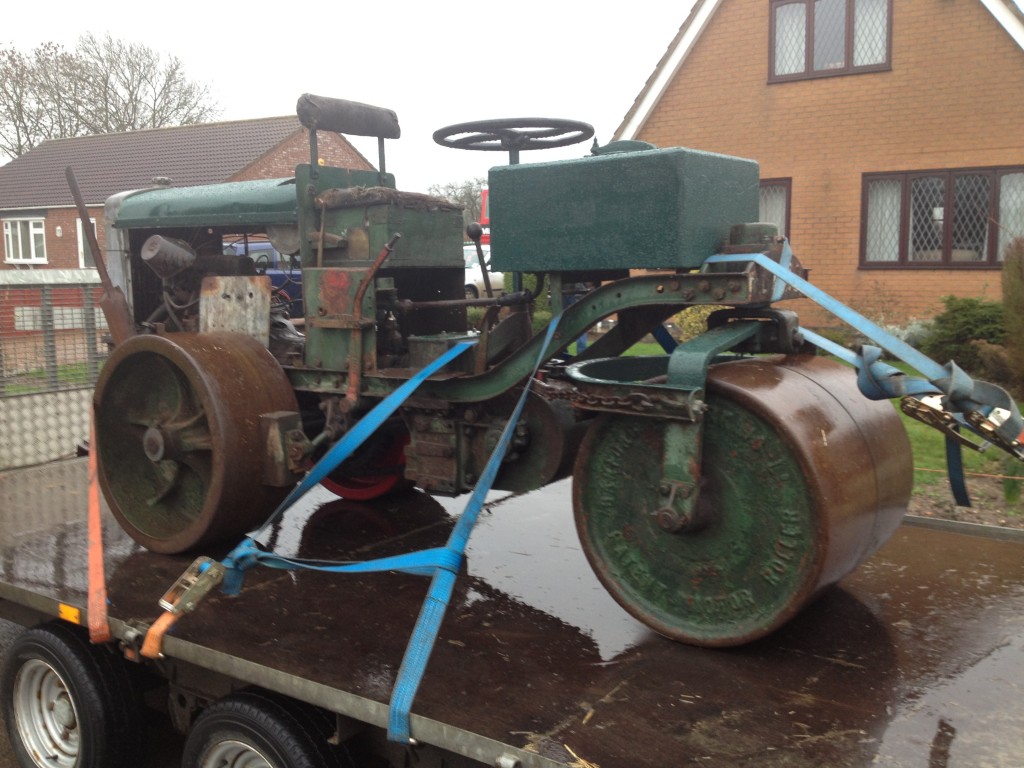 Below: Soon after arrival in Durham I decided to drain the engine and radiator.  Finding the radiator tap inoperable the easiest solution seemed to be to remove the radiator as a whole, plus the bonnet, and take these indoors for attention.  Note the original fuel tank in position (I was so pleased to fins this had survived the mods).  The large white panel is a mount for the Morris 1000 control unit, ignition and choke.  The original B&P throttle survived and has been re-connected to the carburetor.  The throttles have almost always been missing on A Series rollers I have looked at so I was also pleased to see it in place. That exhaust has to go! 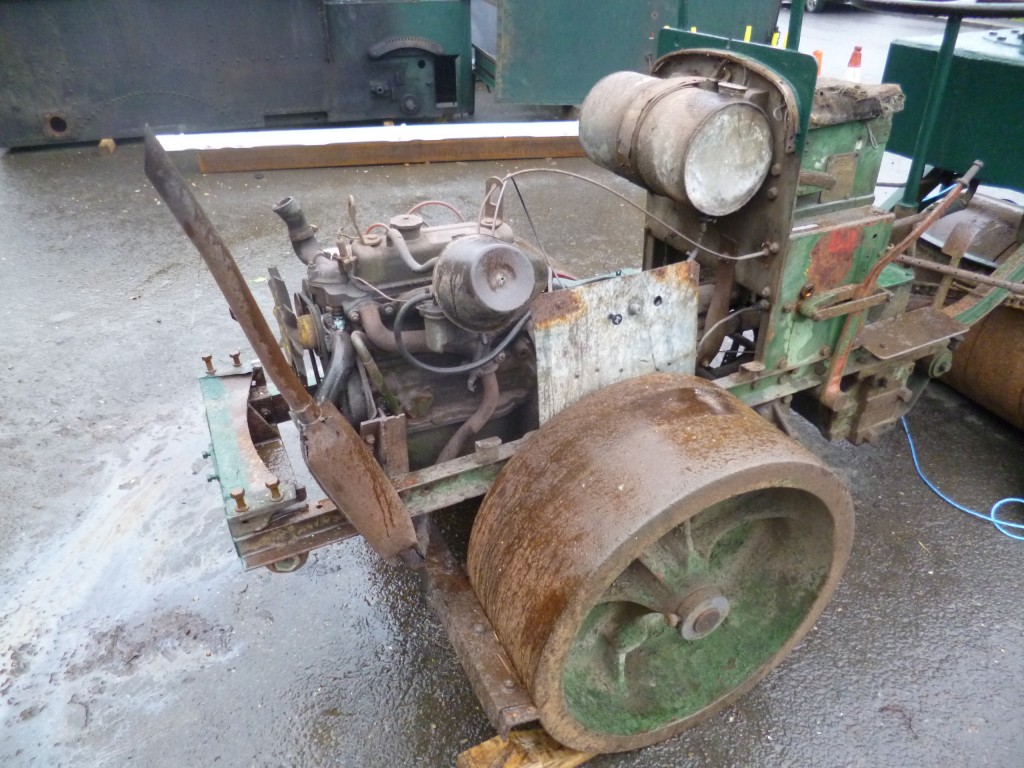 Below: A view from the other side, noting the large dynamo and coil, gearbox to the left and prominent air filter to the top.  In due course I intend to re-fit ‘Barf’ (as my wife calls the roller!) with a Brotherhood 4-cylinder engine.  But for now I intent to keep the roller within a few days of running order, by selectively removing items for refurbishment or repair. 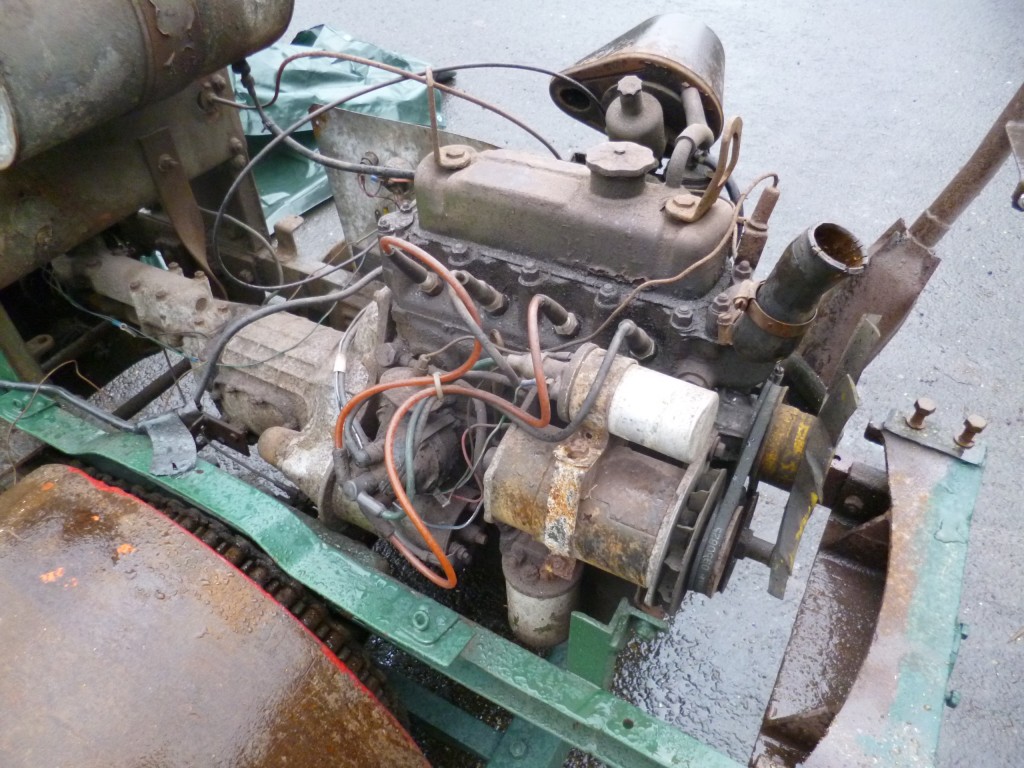 Below: The seat/toolbox.  Nice that it survived but the ad-hoc upholstery has to go – if nothing else it looks awful and retains the wet!  The seats generally don’t appear to have been cushioned so a new lid and a tidy up should suffice here.  Note the brass plate – this is the spec plate for the engine originally fitted. 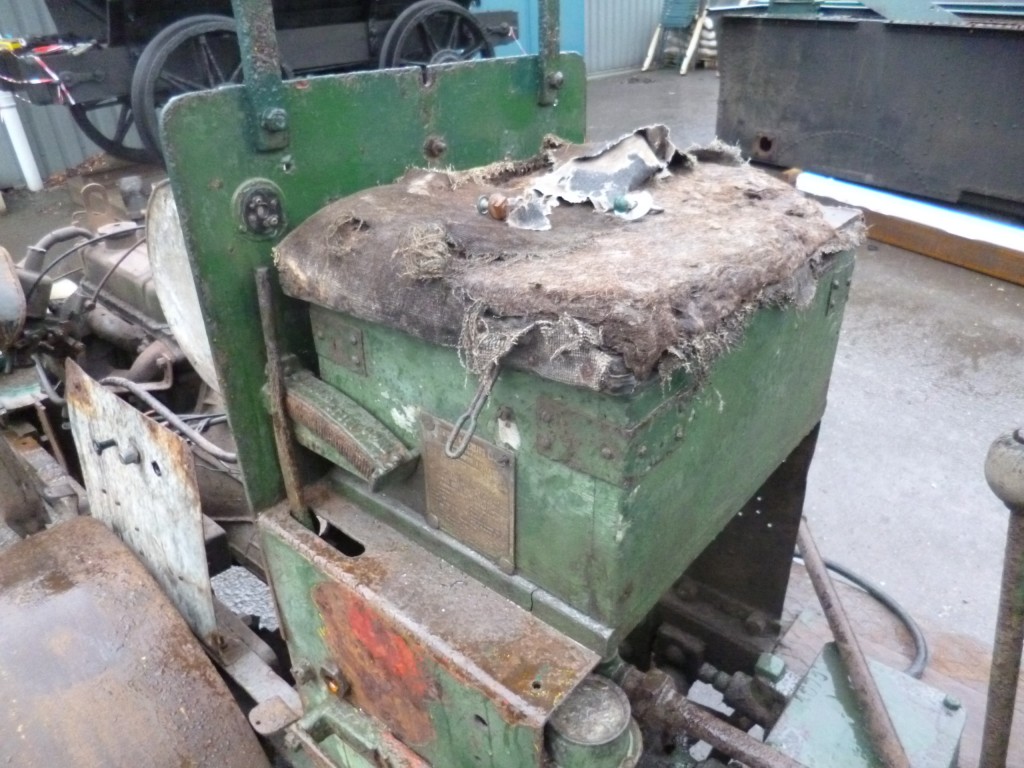 Below: Bonnet and radiator.  The former will be replaced once I can access the drawing records at Lincolnshire Records Office where B&P (and Aveling Barford’s) records remain.  These have just been catalogued and placed online so this should help the situation.  I would, though, dearly love to see/borrow/buy the relevant B&P catalogue for the A-Series.  See http://46.32.240.35/beamishtransportonline.co.uk/downloads/trade-catalogues/ for other catalogues that I’ve scanned and put on this site for study by others. 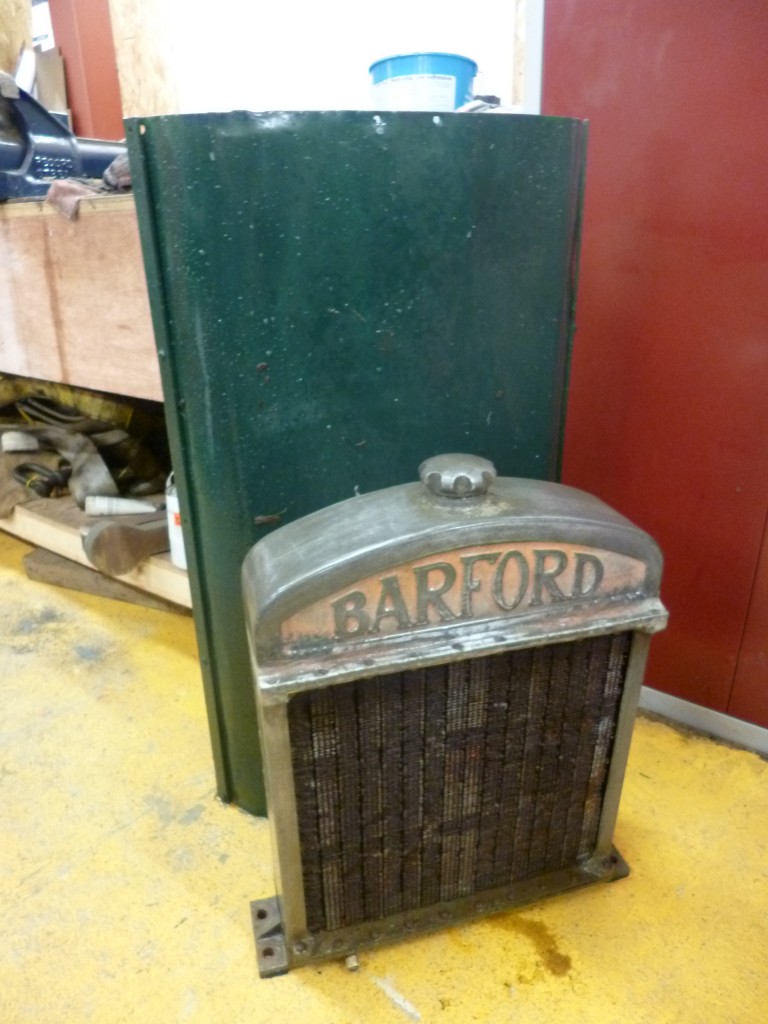 Below: A closer look at the seat/toolbox.  Selective rubbing down should reveal the original colour that EE067 as painted in.  failing that, Bill Dickins, the Road Roller Association Archivist, has made extensive studies of the B&P archive at Lincoln and may be able to advise on any relevant records that may survive there.  Hopefully this will also confirm the build year (I guess about 1929) and the registration number. 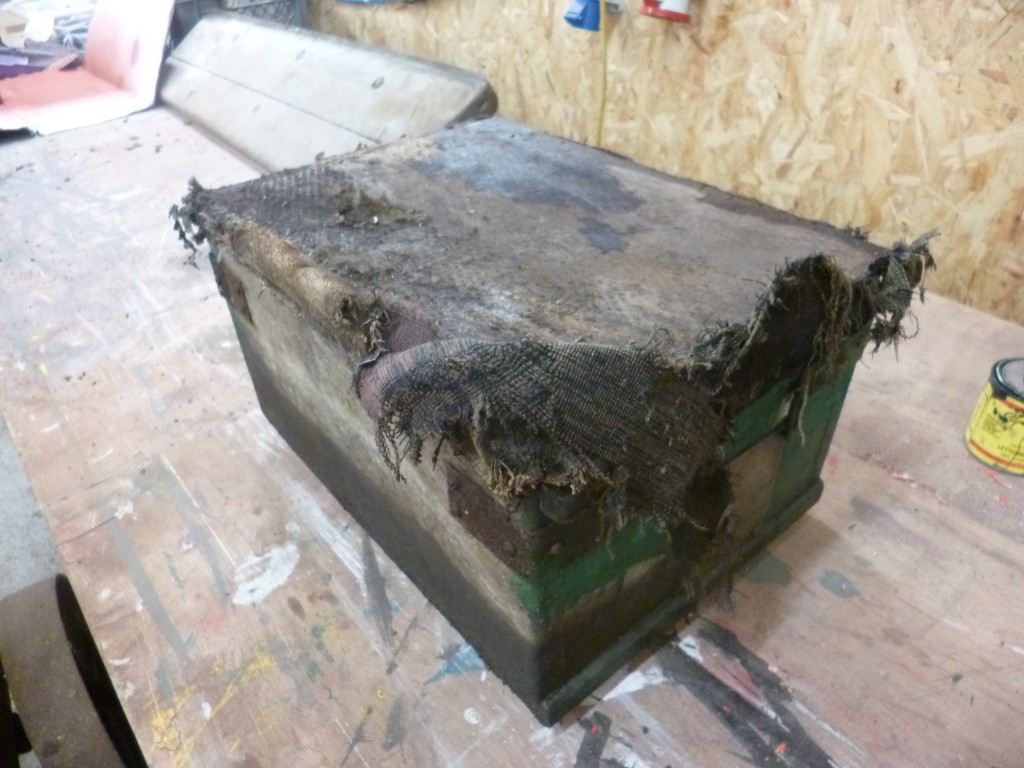 So, perhaps unusually for a hobby I have chosen to do my paid job!  Nevertheless, the challenges ahead should prove as enjoyable as they will frustrating and I hope to add what I learn and discover on this site for others interested/contemplating a similar project.

The next few months will see work to prepare EE067 for an appearance at Beamish’s Great North Festival of Transport, so I am looking to complete the radiator and seat, temporarily refit the bonnet, remove and repaint the rear rolls, inspect the transmission, service the engine and the produce a much longer list of jobs that need doing!!!

Bill Dickins has confirmed that EE067 is an A 2 1/2 roller which left the factory on the 22/8/1929, supplied to W & J Higginbottom of Chester, Cheshire.  It was originally finished in ‘red’ – certainly something I will have to look into!  There may be traces of this colour beneath the green – but what shade?  Lots to consider.  I have also drawn up a restoration programme, phased with the aim of keeping the roller little more than a few days from being put into running condition – I think it is important for project morale to keep it nominally a runner!