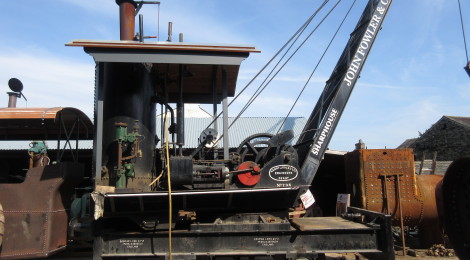 The summer holidays roll on and the site remains incredibly busy, no doubt assisted by favourable weather and perhaps the recent TV appearances on the BBC series ‘Full Steam Ahead’ which was filmed at the Museum recently.  With a lot of staff on leave, the summer holidays are naturally quieter for the workshop teams, though the site maintenance teams are usually busier!  The preparations for fitting period lighting throughout the Pit Village and Colliery are in-hand and many of the fittings have been overhauled and fitted with new electrical components.  We hope to have a grand switch-on this autumn, hopefully ahead of the Halloween evening events, ensuring that the temporary lighting of previous years, for this area at least, is a thing of the past.  Once this phase is complete we will extend the project further, though we will have used up most of our present stocks of Revo lights and heads.  More on this in coming weeks…

Below: The Leyland Cub access bus project is presently on hold, with the bus stored in the RHEC pending a review of the programme to bring the project to fruition.  This is the last we’ll report on this for a few months now, though I hope to bring further news on the project later in the year. 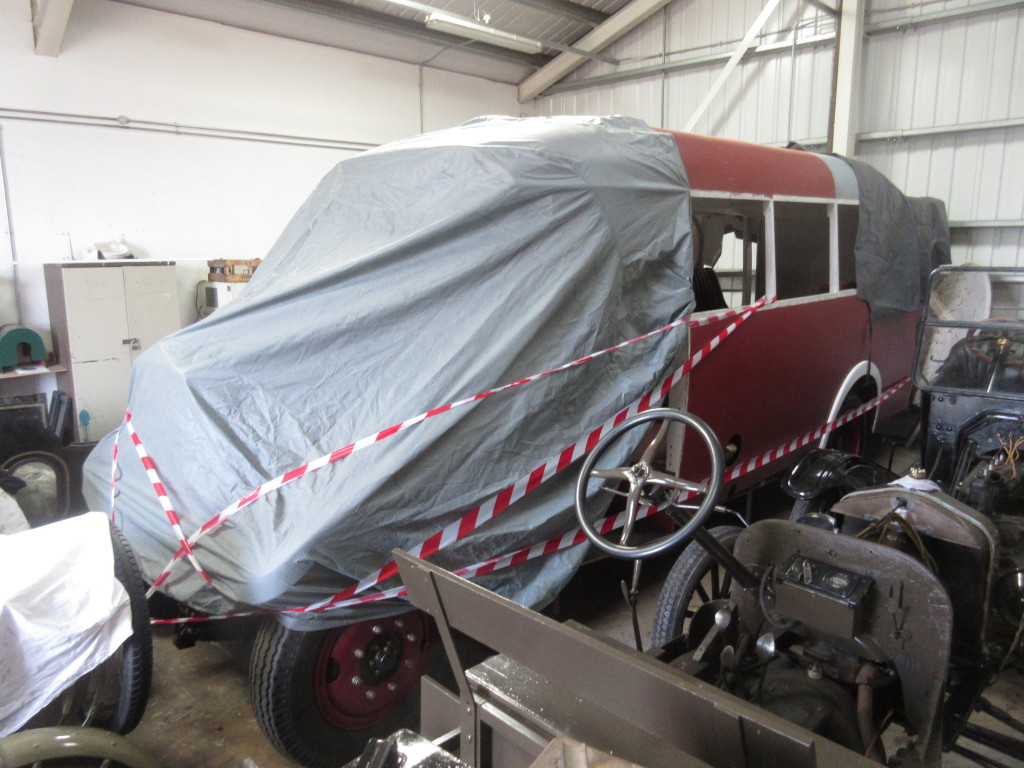 Below: In order to place Samson on display when not in use, Tony is constructing a small loco shed (or ‘hutch’!) to be located in the area adjacent to the Colliery boilerhouse were are carrying out a number of improvements to make this the focal point of various engagement activities including the present blacksmithing and proposed sawbench.  Some track and groundwork preparation has been carried out and the new siding will be made from our remaining stocks of Hudson Jubilee pre-assembled panels of track, extending to include an ash-tip siding as well.  The ‘hutch’ has been entirely assembled using scrap or spare material, including the window panels from scrapped sash windows.  The roof will be pantiled, again using material that we have on site.  The aim is to ensure that the engine is on display and on fine days can be pushed outside for visitors to view, when not in steam.  The future completion of the narrow gauge stone engine shed (located over the pit) is some way off – unless there are any volunteer stone masons out there who would like to join us???!!! 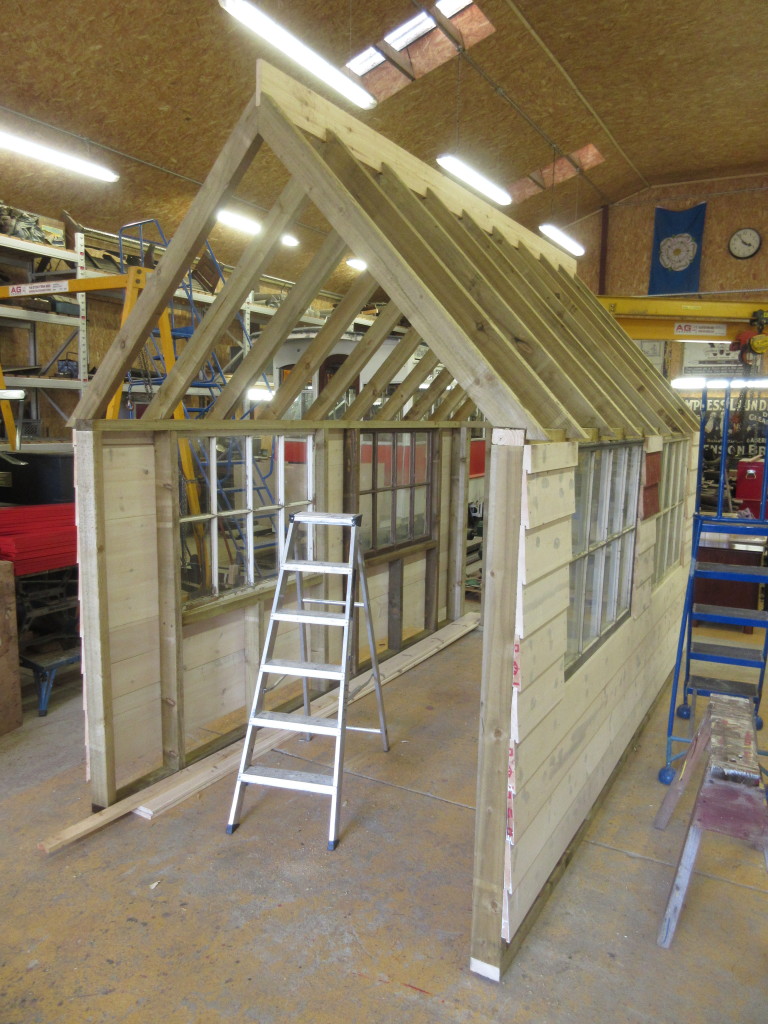 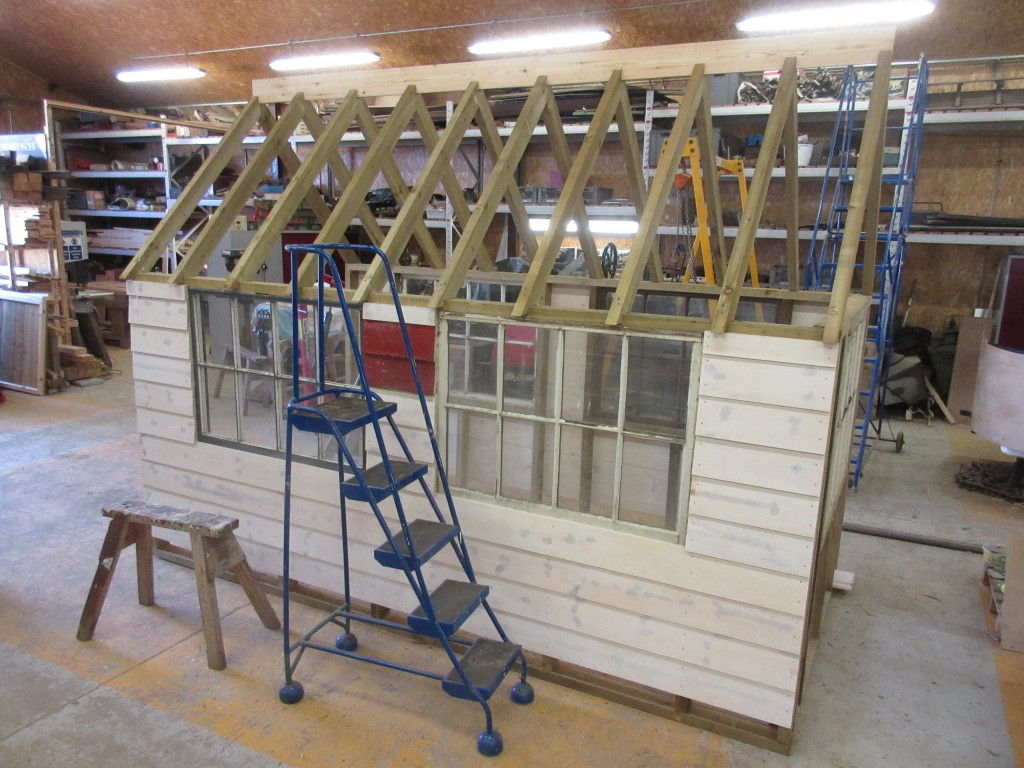 Below: Refurbished Revo light fittings are seen being painted in readiness for installation around the Pit Village and Colliery as part of the aforementioned programme of replacement of temporary or modern lighting with period alternatives.  These have all been pulled out of various stores and refurbished by Electrician Mike Goldsmith and his apprentice Darren.  In addition to these, there are reproduction Davy lights on order plus a number of the existing fittings around the area to refurbish.  This is work we have hoped to carry out for a number of years now, the ultimate plan being period lighting across the whole Museum… 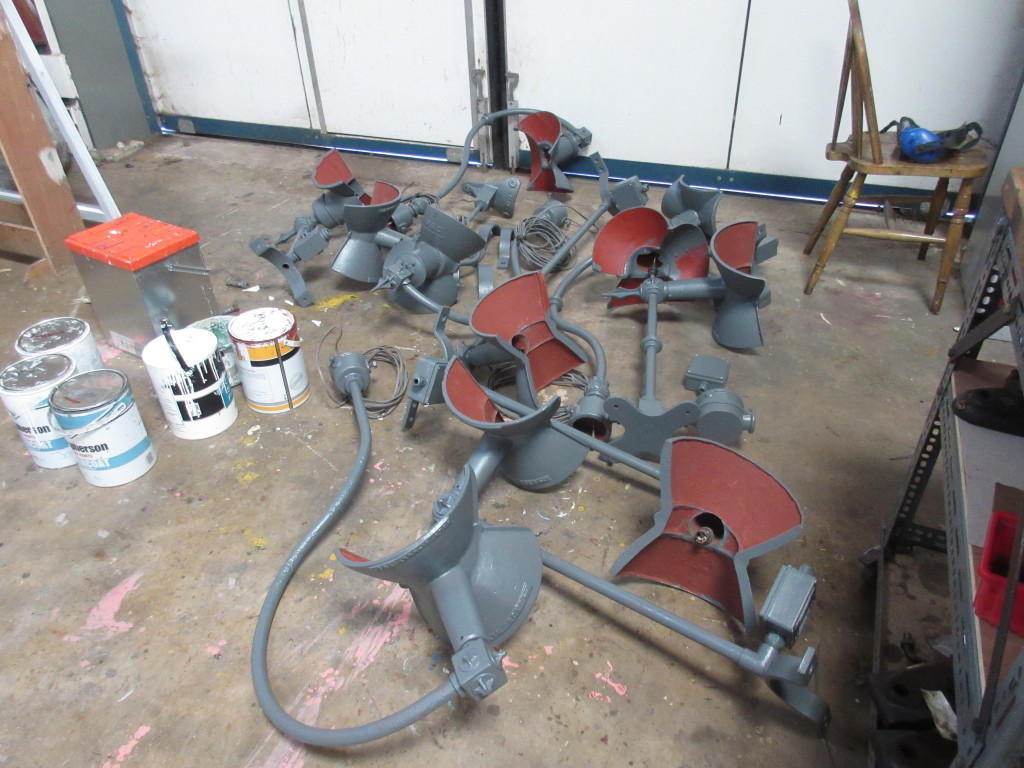 Below: Following its third (!) return from refurbishment, the Friends Saturday team have placed the radiator from motor roller R025 back onto the roller, enabling the manufacture of the new bonnet panels to continue and a test start-up to be considered in the not too distant future… 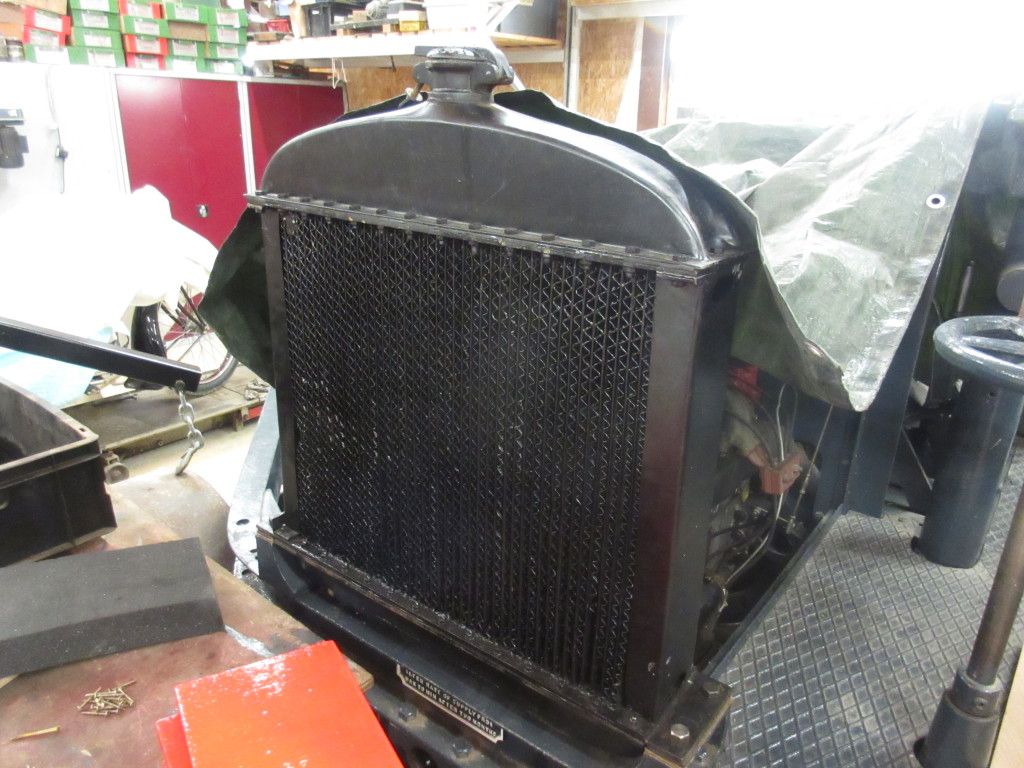 Below: Chris has been busy fabricating the complex box sections to replace the sills on the Fordson pick-up.  The originals are so rotten that there is very little left to repair.  The van is a classic example of paint hiding a multitude of sins, as the door frames are in a similar state and so Chris is fabricating new frames including the rain channel (also non-existent in most places).  There are also some repairs of dubious provenance that have appeared where the paint has been removed from the bodywork and so these areas are also subject to replacement.  The wings are truly awful and now they have had the filler and paint removed have shown just how bad they were and how poorly repaired they were.  Some structural repair will be needed, but it will be out with the filler once again to restore them to their intended appearance.  All time-consuming work and it keeps a vehicle out of action that is vital to the daily servicing of the site.  We have only had the Fordson for a few years, but hopefully this work will give it longer working future than it might otherwise have expected. 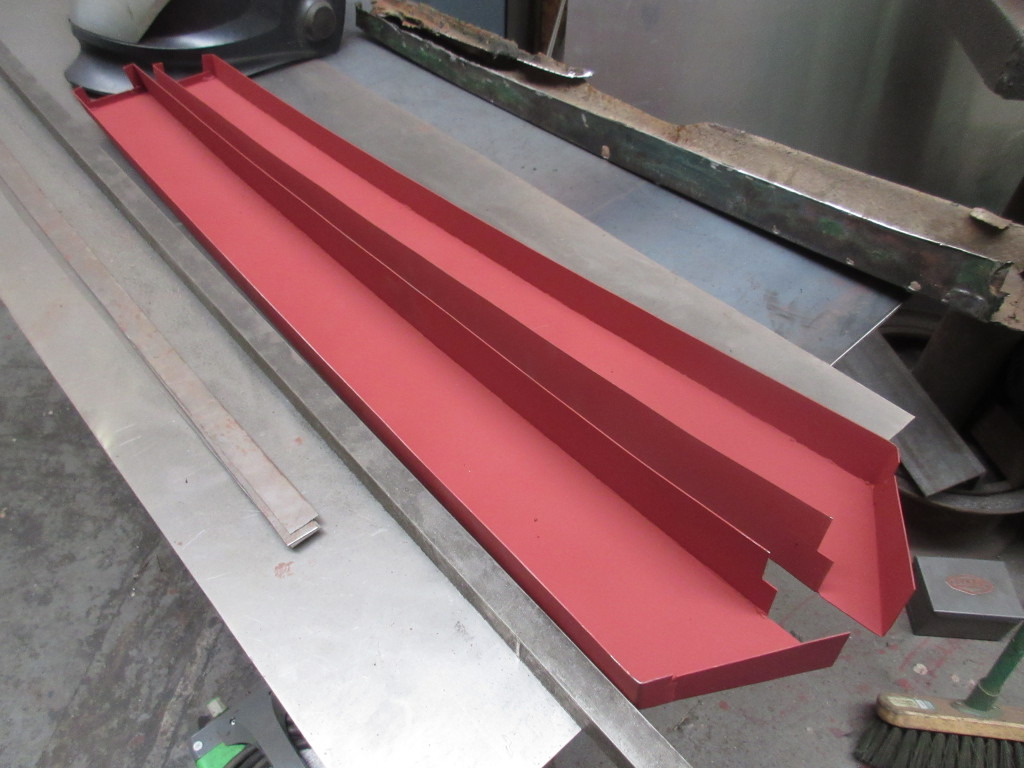 Below: Coffee Pot was stripped on Monday in readiness for a boiler-lift.  The boiler will be dispatched to the Severn Valley Railway shortly for re-tubing,  Meanwhile some work to the bottom end can take place (including steam cleaning several years inaccessible grease and oil!).  I think the cladding sheets may also be treated to some attention, though they are rather unwieldy things for rubbing down and painting! 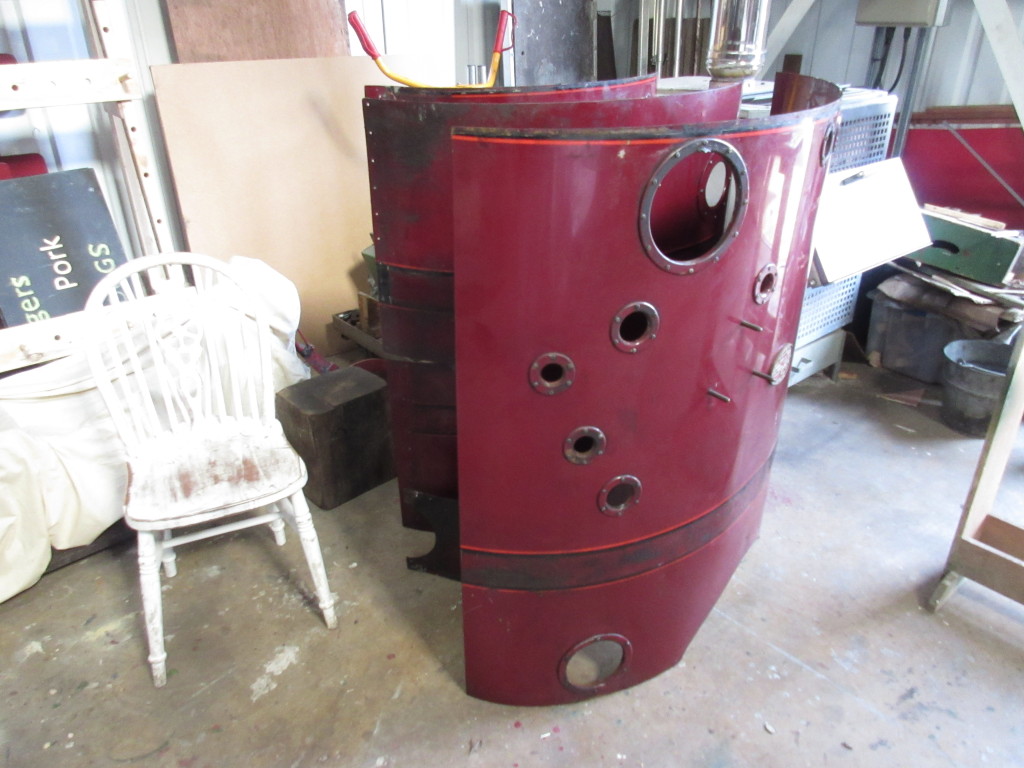 Below: Coffee Pot No.1 bereft of fittings, lagging and cladding.  The whole thing is to be lifted out, complete with the engine unit which can remain attached to it. 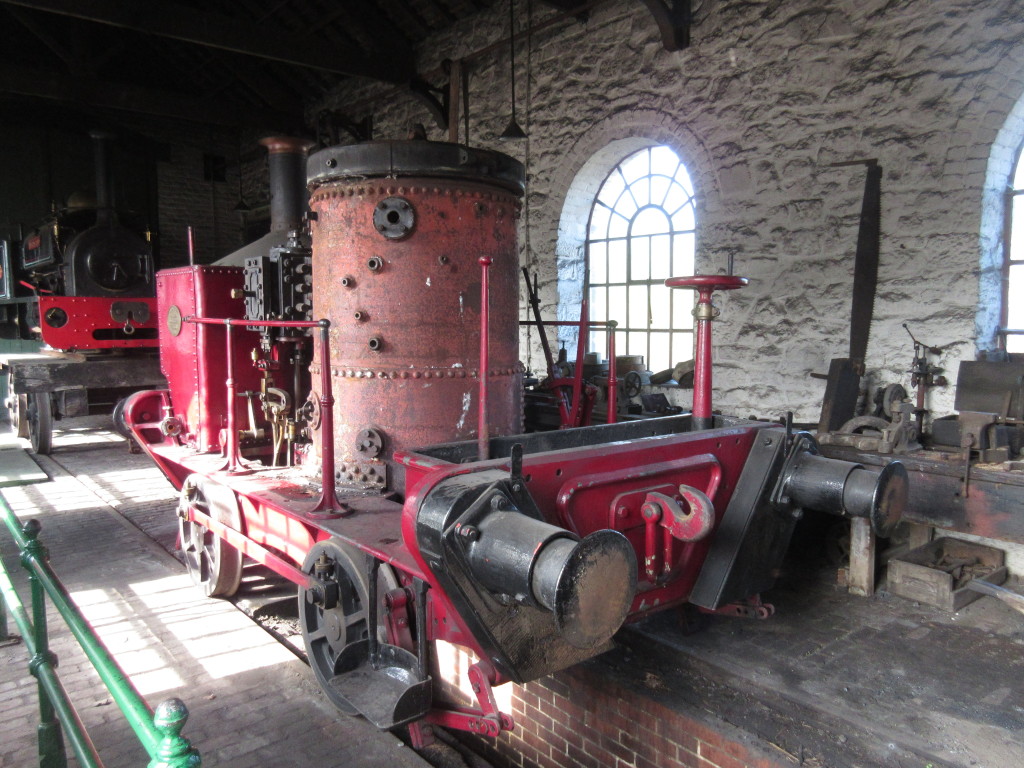 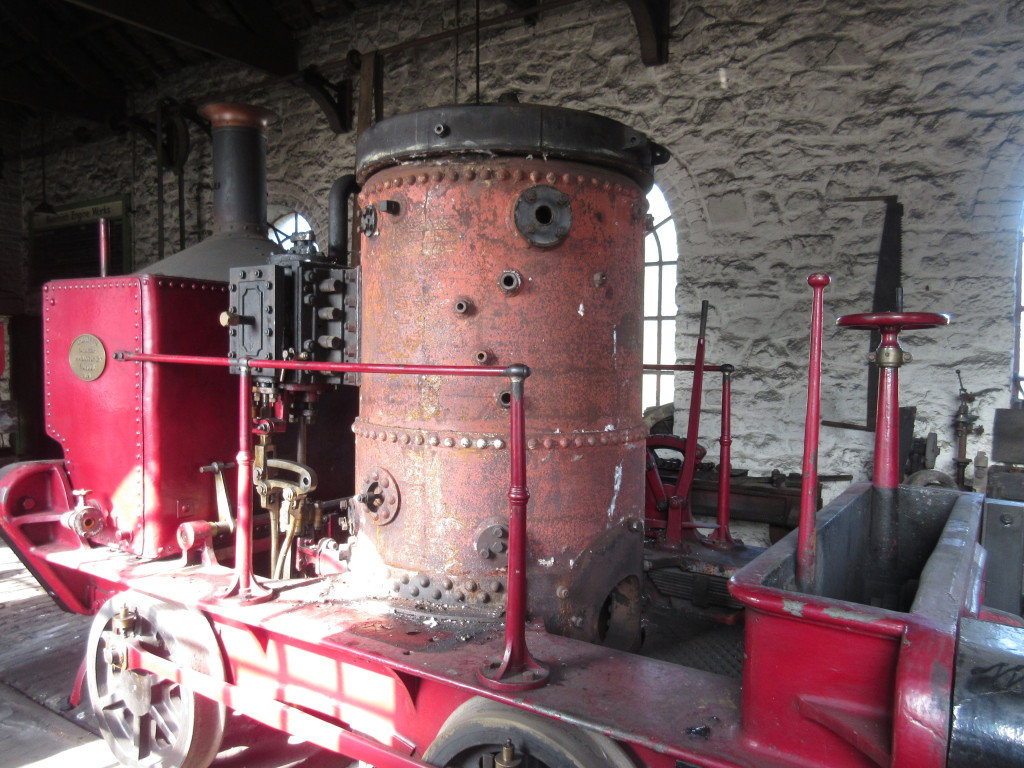 Below: Finally, some readers may recall the transfer of the Coles steam crane that used to stand outside the tram depot to the Old Hall Farm Museum in the Lake District.  The crane has been overhauled and returned to steam, though can run on air.  It is now in near-daily use at the workshops of the museum, seen here holding a hydraulic rivet sqeezer engaged on boiler work.  There are numerous agricultural engines and road/steam rollers on display at the museum, as well as vintage vehicles, agricultural equipment and working horses.  Worth a visit if you are in the South Lakes. 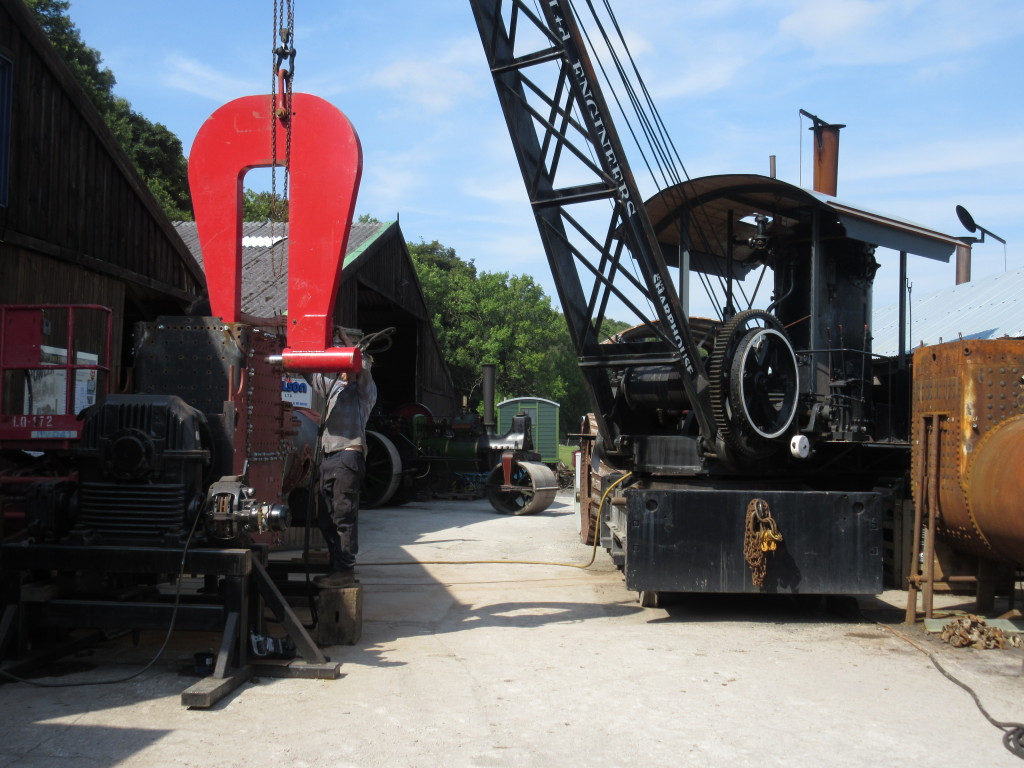 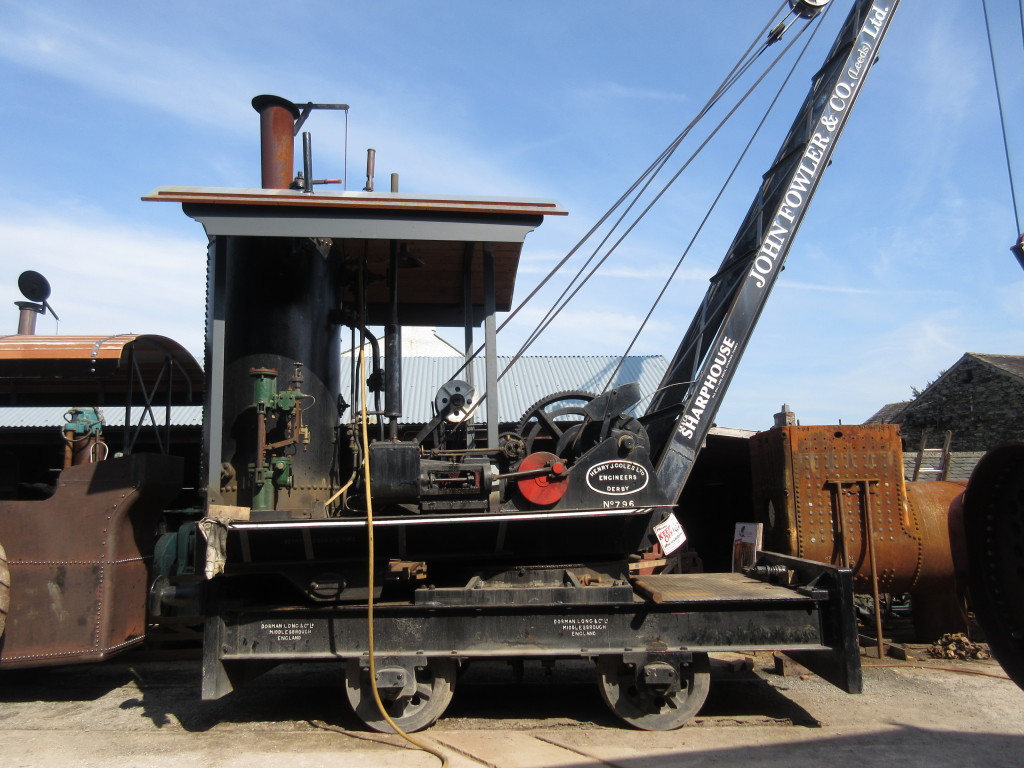 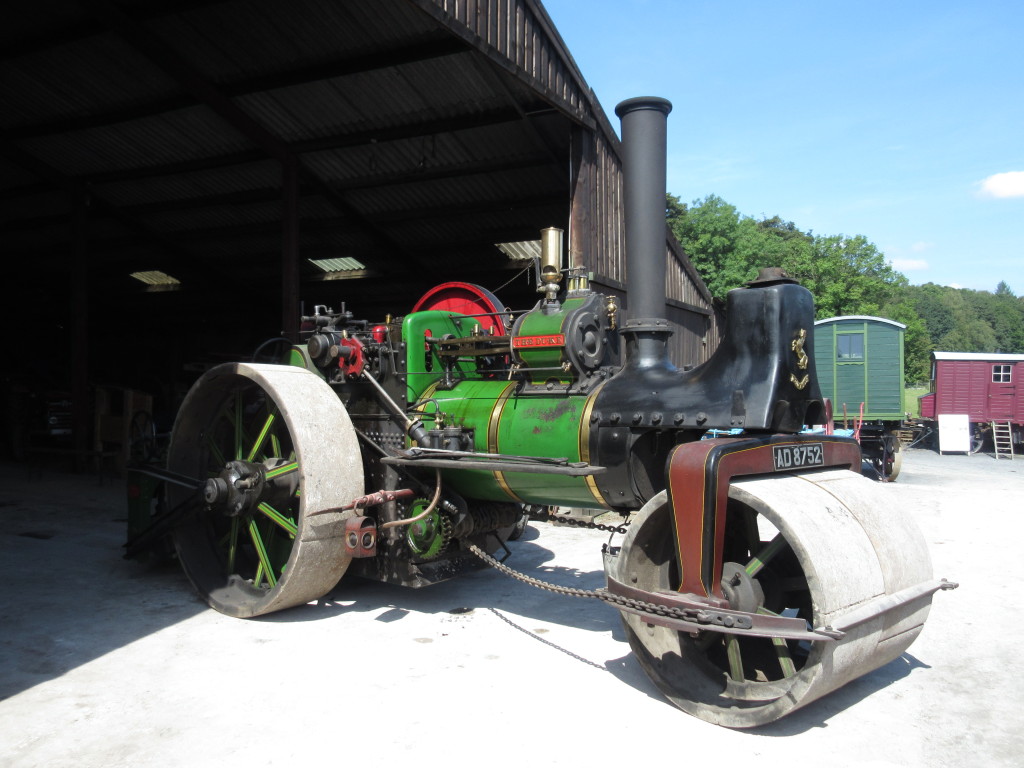 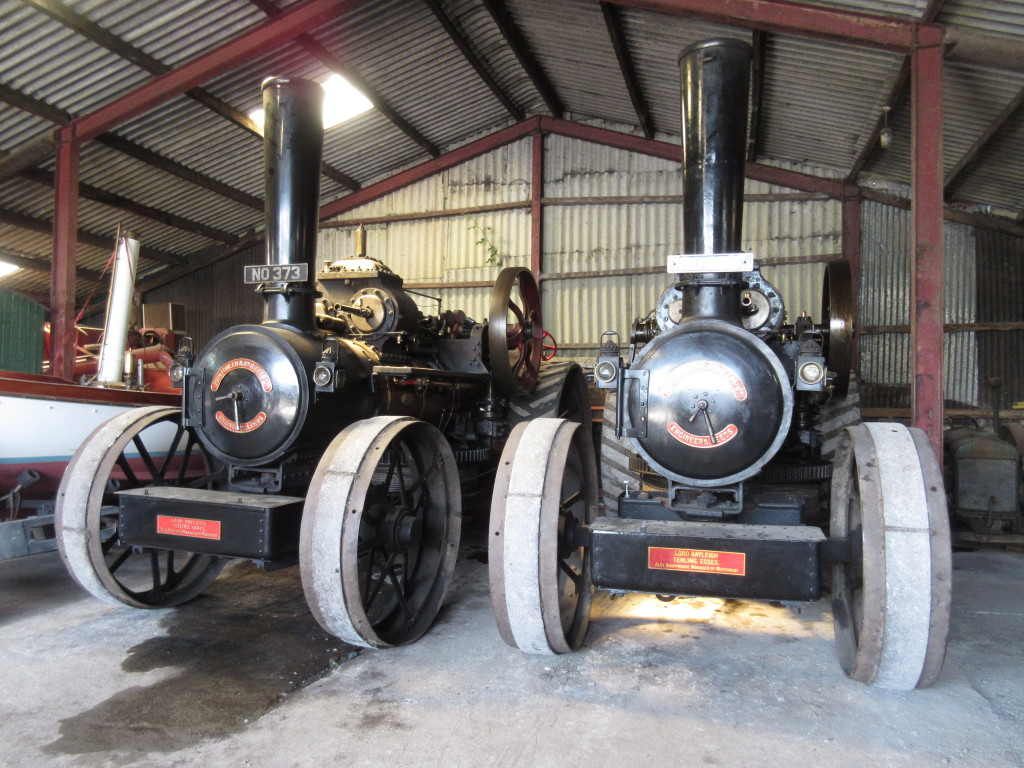 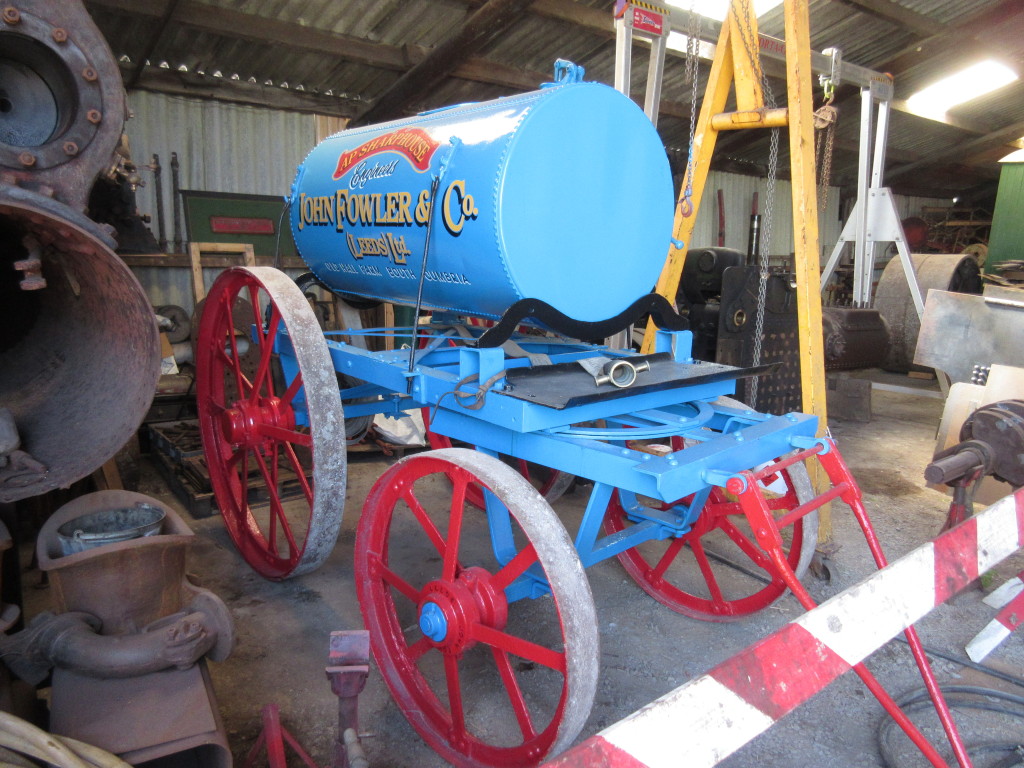 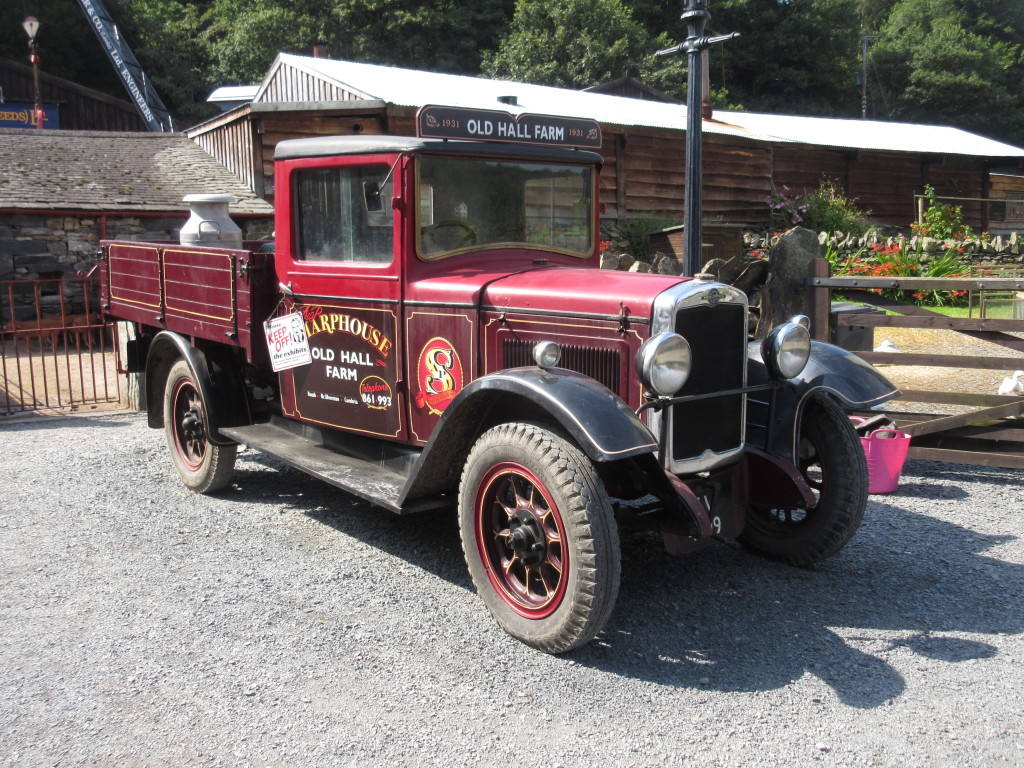