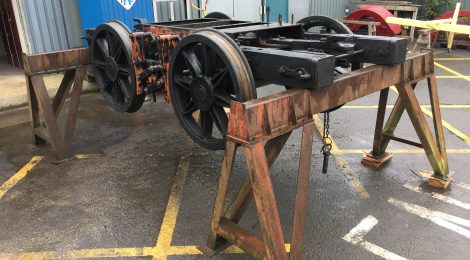 Below: Some time ago the blog reported how a spare engine assembly was being created for the B-Type replica bus, as Russell had identified its looming demise.  The work was planned for later this year, but by the beginning of August it was clear that the prognosis was not good and the bus was withdrawn for its engine transplant ahead of the planned time – not ideal during the school holidays but at least we had a virtually complete, and overhauled engine, ready to install.  The photos below show the old engine removed and being stripped of items needed to complete the refurbished block.  Though they are ostensibly compatible, inevitably some aspects are not, so Russell is having to modify and combine some elements in order to mount the replacement block within the chassis and connect it to the existing gearbox. 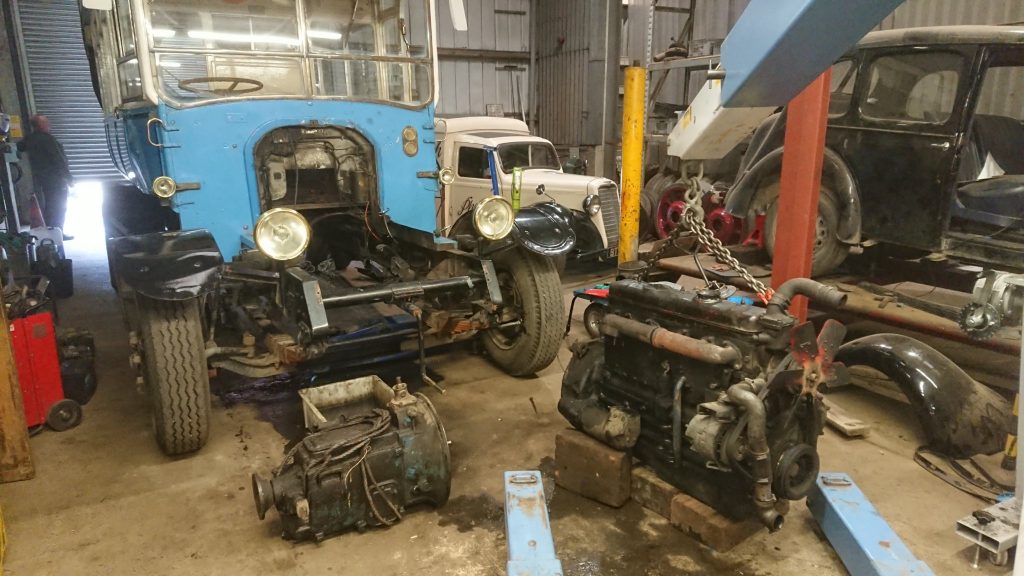 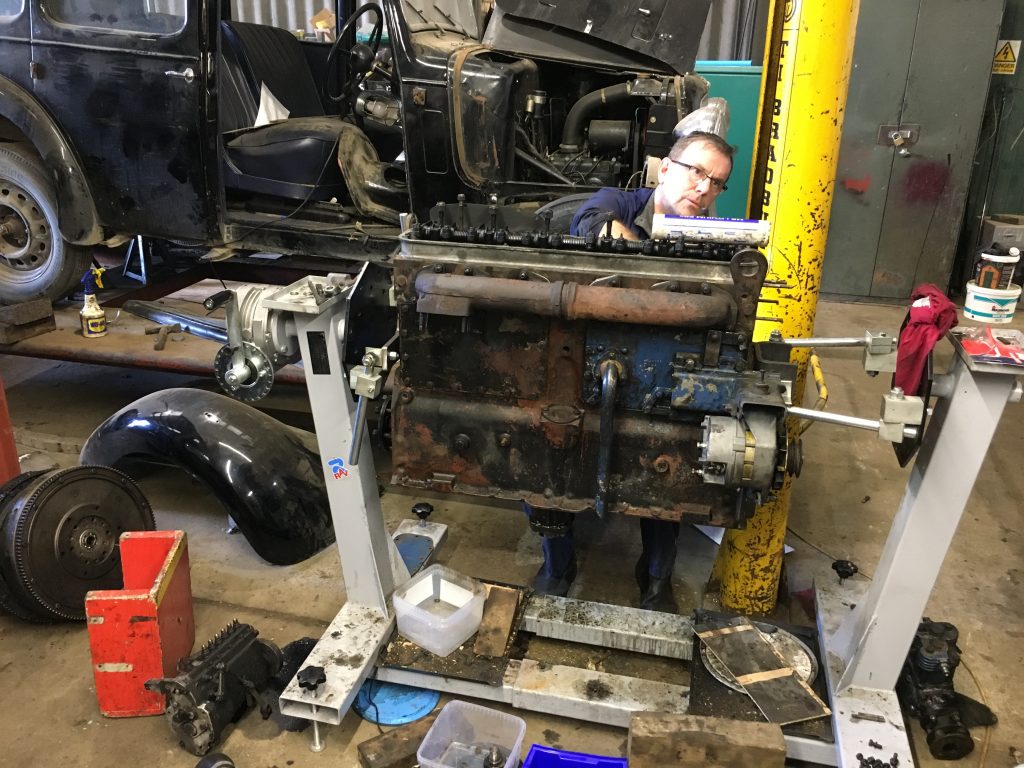 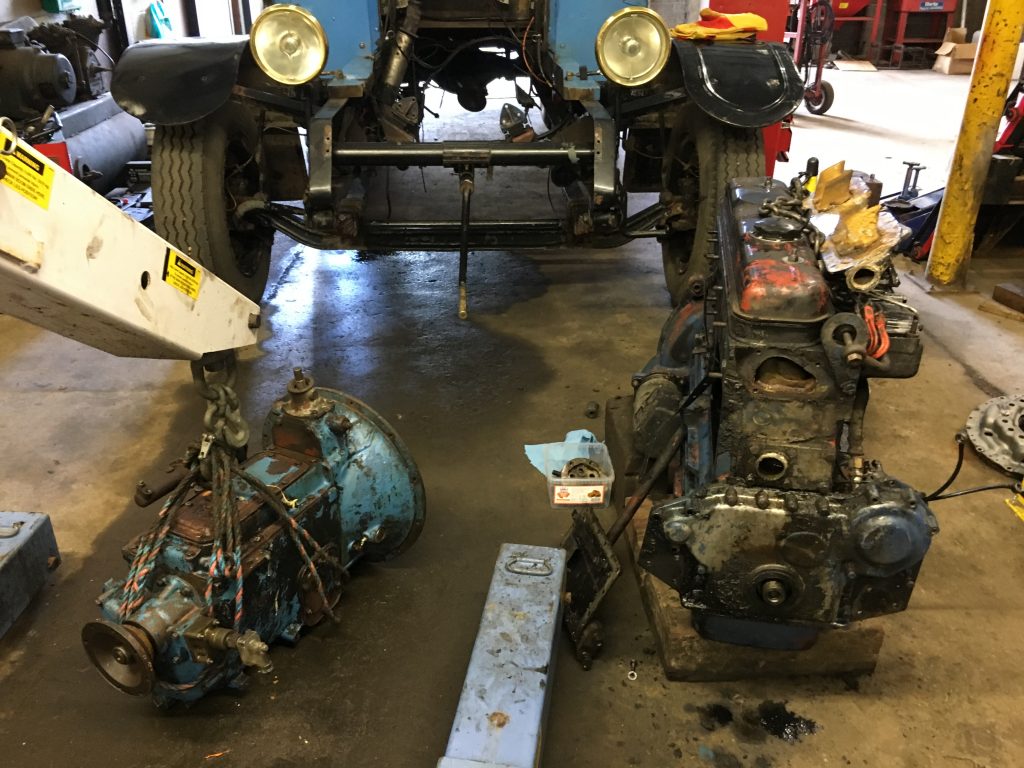 Below: Alan’s baby – the Austin 20 hearse…  After extensive repairs to the engine block (which had been badly cracked) the hearse has been reassembled and tested.  Presently awaiting a new fuel tank (built in house), the vehicle will become something of a ‘pet’ for the team who restored it to health and intend to keep it in sound condition in the future. 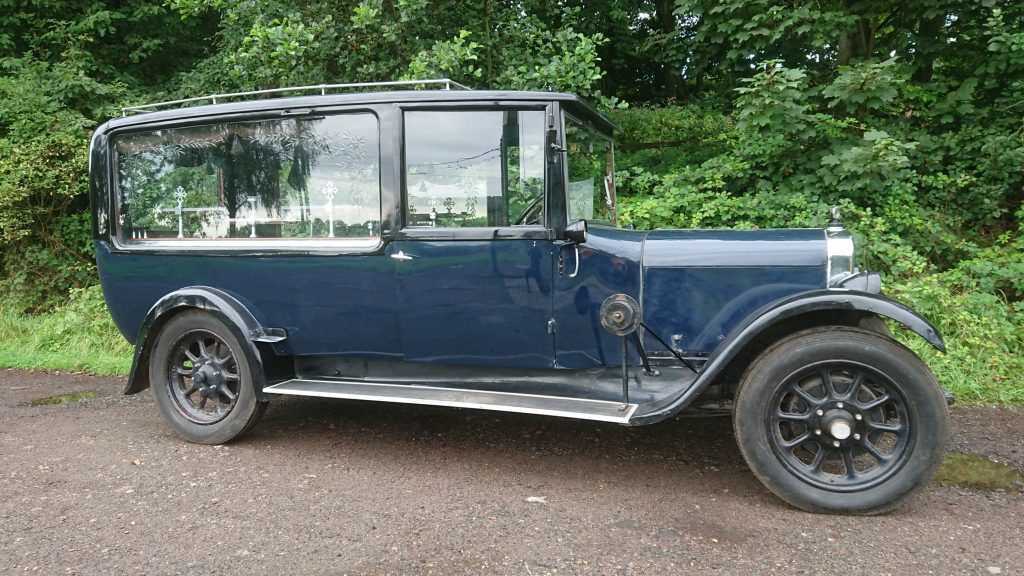 Below: I was experiencing some troubles with the Crewe Tractor (Model T), namely seizing brakes on the Rocky-Mountain brake enhancements, which were an accessory available for Model T brake upgrades.  John inspected them and found a number of issues, and after taking advice, is overhauling the brakes and setting them up so as to provide stepped braking when the peddle is applied (Rocky Mountain first, then the drum brakes, then the transmission brake).  John is also adjusting the transmission itself to remove some of the slack caused by wear. 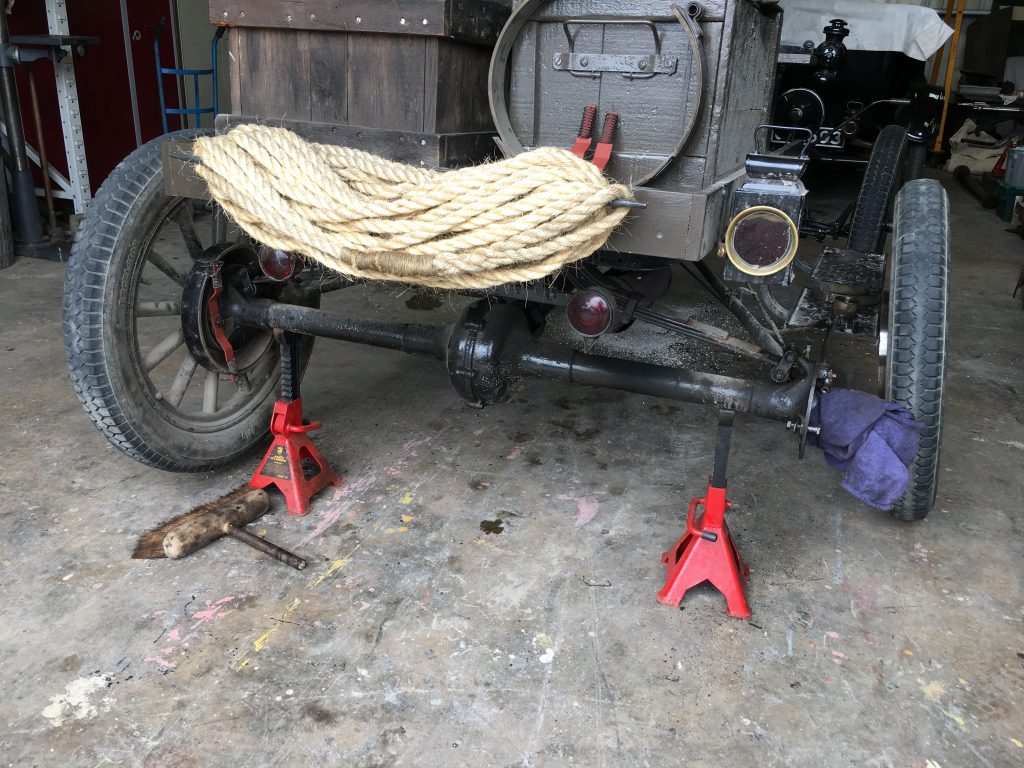 Below: The Ton Truck rebuild is advancing, with a replacement rear axle and differential having recently arrived (the original being in very poor condition).  The engine overhaul has largely been completed and thoughts have also turned to the refuse body and C type of English cab that we wish to fit. 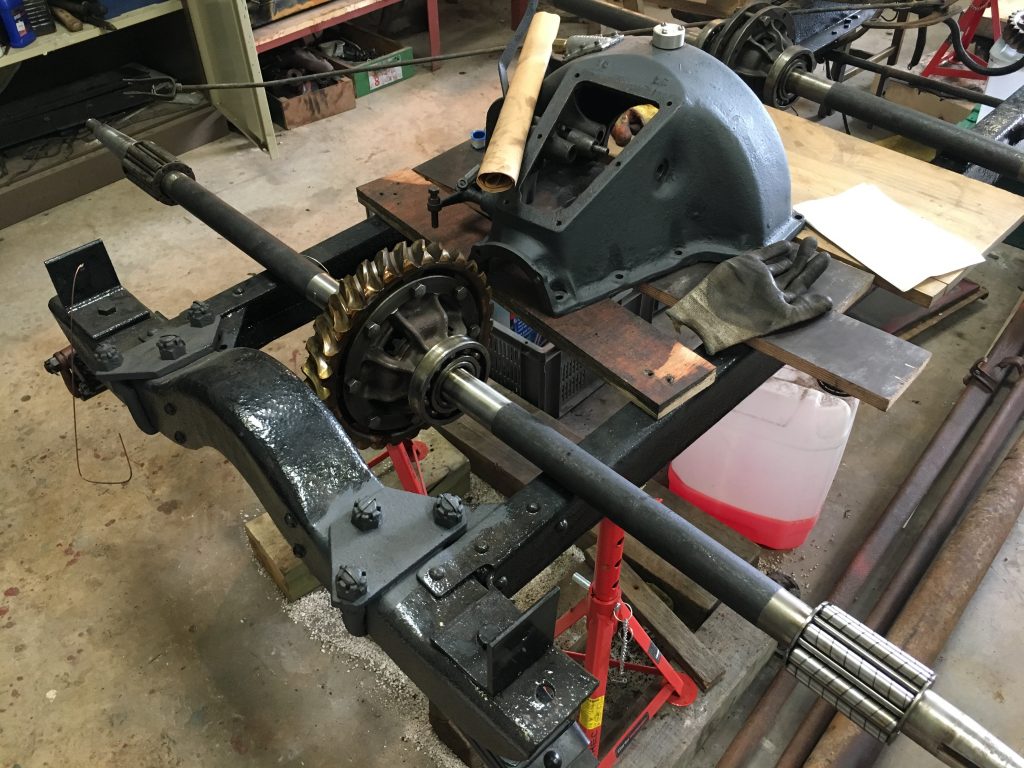 Below: Over in the machine shop, Dave Young is onto the last wheel for one of the narrow gauge projects.  These were cast in steel from a pattern found in the collection and are extremely slender and quite difficult to achieve a satisfactory finish and profile on.  He has persevered, though, and the steel for the axles is on order. 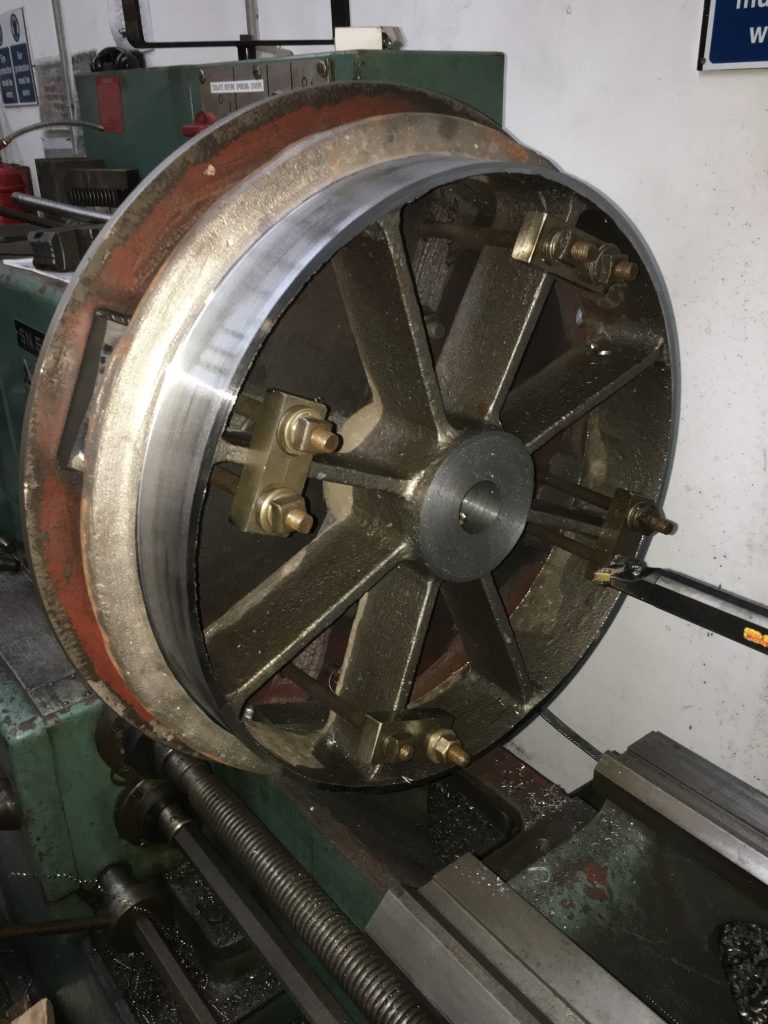 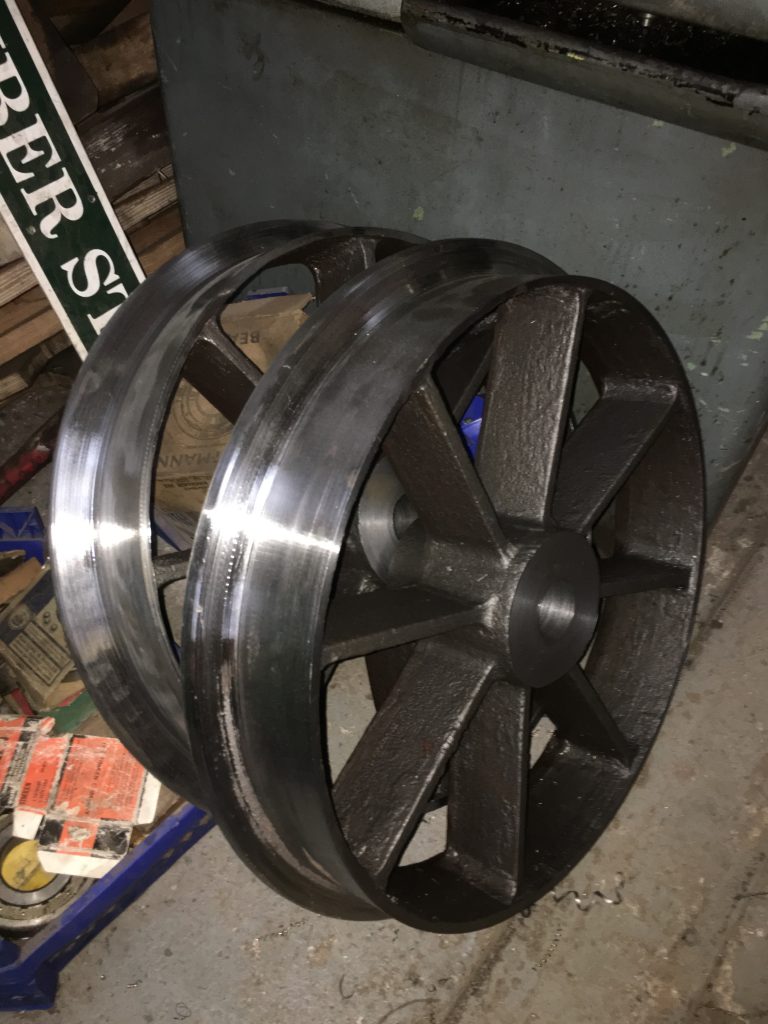 Below: Brass capping strip for the narrow gauge open coach – manufactured from spare bits of pine pew we had, the strips protect the grain and add some protection to the profiled edges.  The steel for the chassis has been ordered, whilst other parts are being prepared by Dave to complete this job. 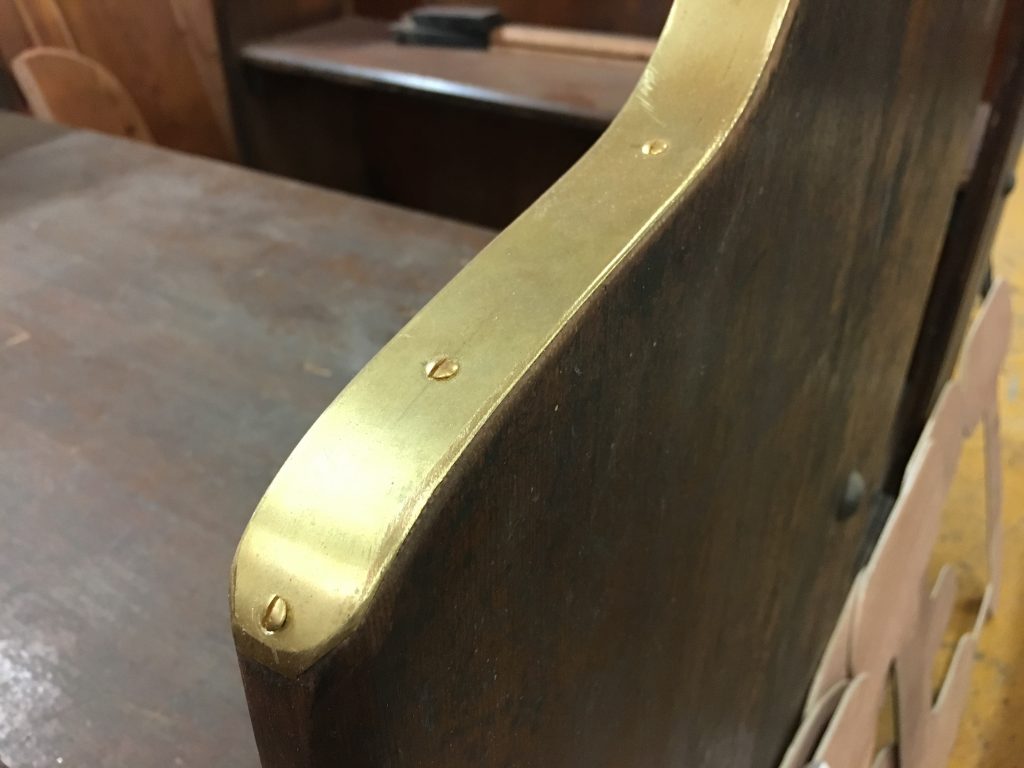 Below: The Waggonway brake coach arrived at the RHEC, semi-stripped of bodywork.  It was quickly dismantled and then steam-cleaned.  Some repairs are needed and an overhaul of the air braking system is also taking place.  Once painted it will be ready to receive the new, Brampton style, body… 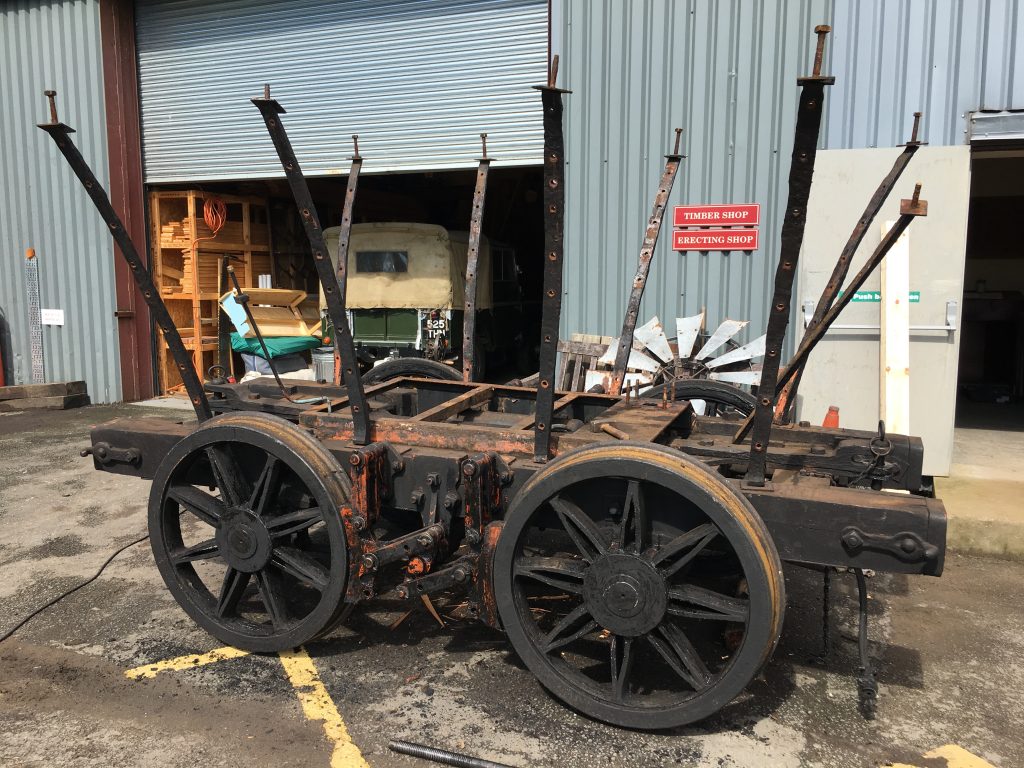 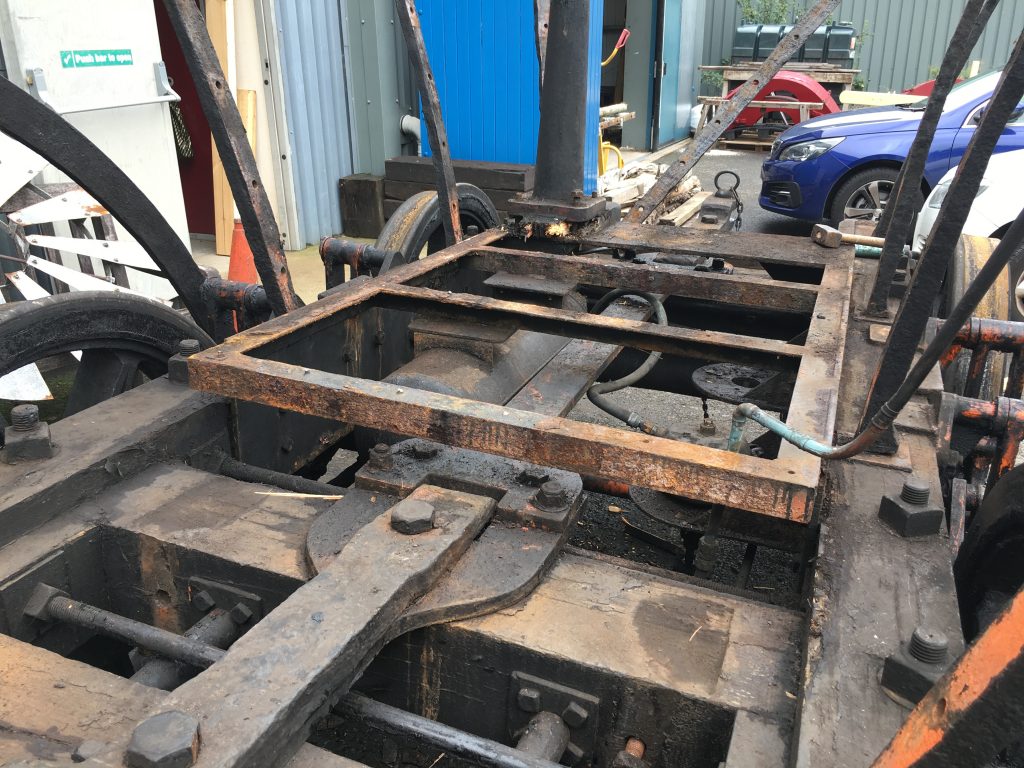 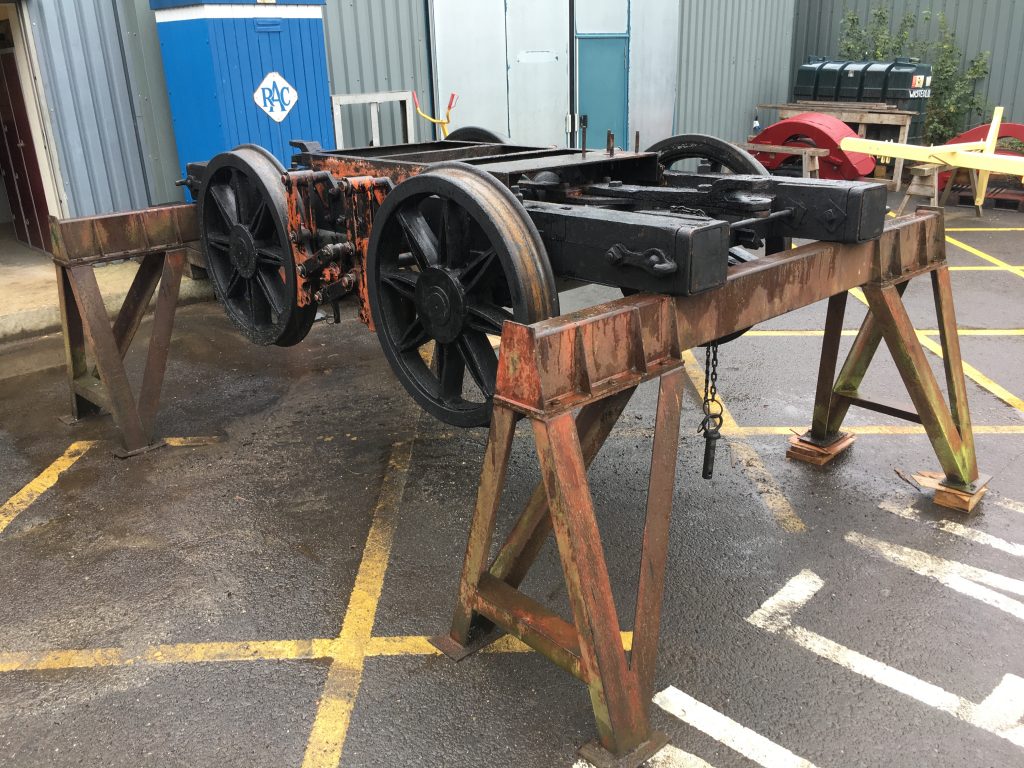 Below: Progress on the Brampton bodywork – the ends have been completed and are in undercoat (the top coat for ends and solebars will be SC Crimson), whilst the frame itself is modified to fit the chassis.  The wooden panels have been varnished and will be lined etc. once they are fitted to the frame.  The brake position will be moved to one of the end platforms as part of this work. 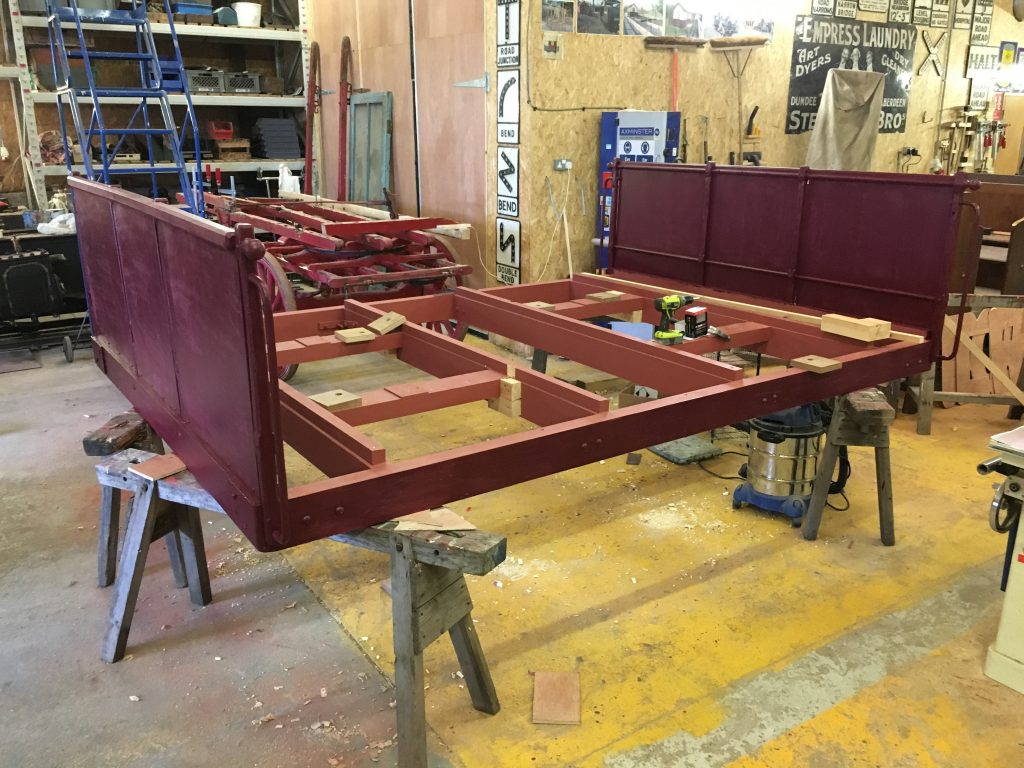 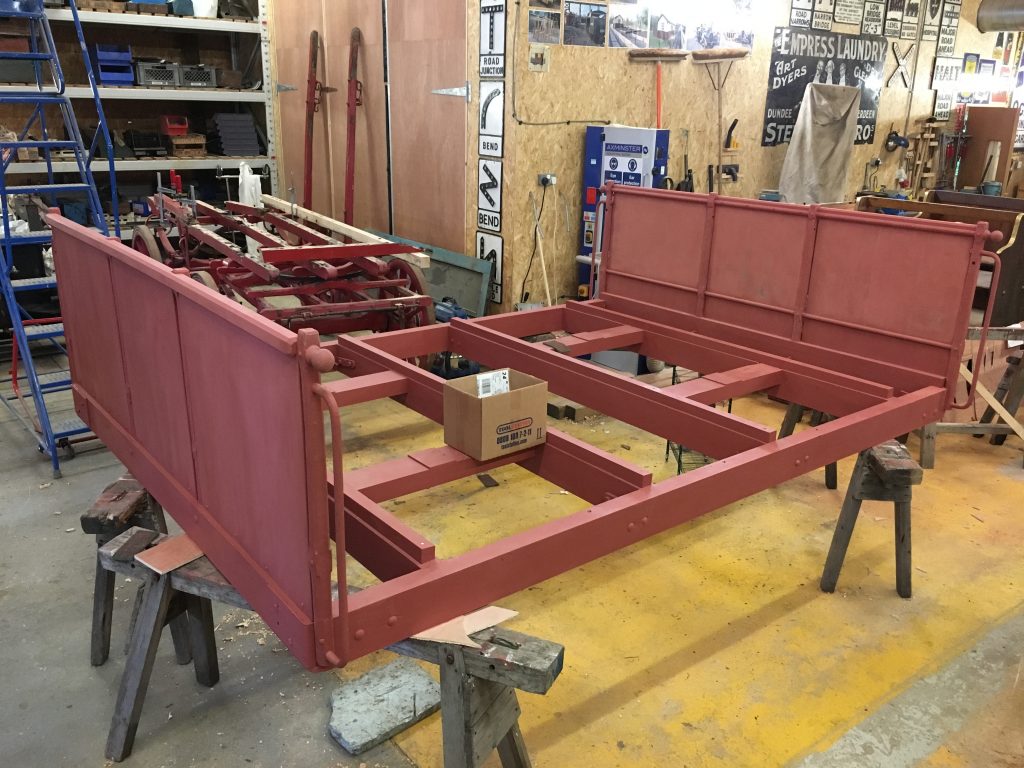 Below: The NER stores van which was once part of our collection, and was transferred to the Locomotive Conservation & Learning Trust, is based at Kirby Stephen and has recently moved into their new restoration/storage shed where its restoration into a learning vehicle to support the J21 rebuild is planned.  You can read more on this project on the LCLT website… 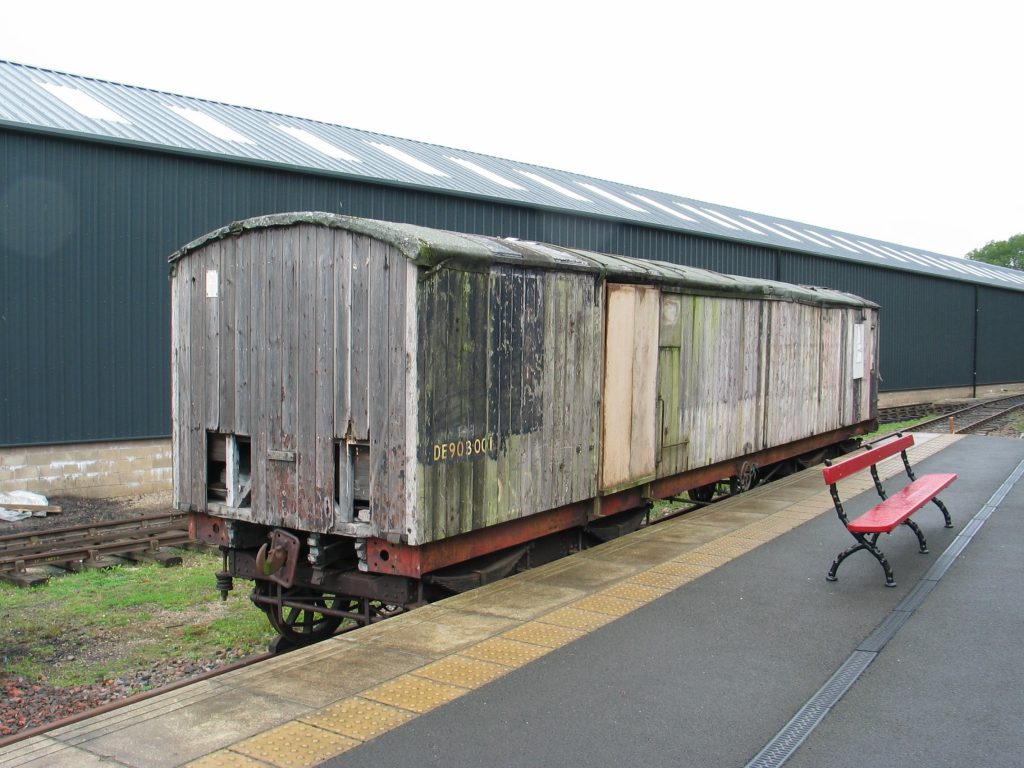 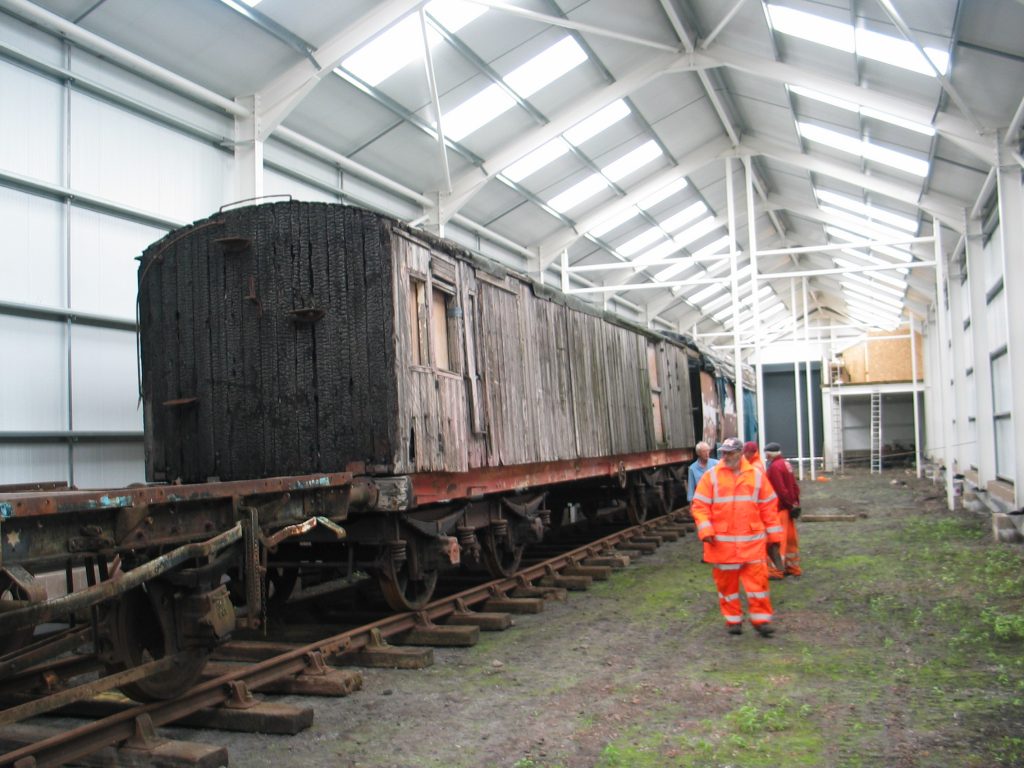 We are currently looking for two new staff within the transport team – a fitter/machinist and a tramcar technician.  More information can be found on the Beamish website.  We have also taken on three apprentices lately, who are on long-term apprenticeships.  Like other heritage operators, where collections/artefacts are used fairly intensively, there is a real need (and anxiety) to ensure succession for skilled staff and development of new skills within the team.  Schemes in the past have tended to be QANGO based and no longer than a year in duration – not really adequate to plug the skills gaps, though useful to meet and identify already skilled individuals (our team has a number of staff who came to Beamish via this route).  This recruitment is very exciting and should enable the department to be far more resilient and enable much more work to be undertaken in-house.  This gives us both control of programme and cost, where it has not always been the situation before. 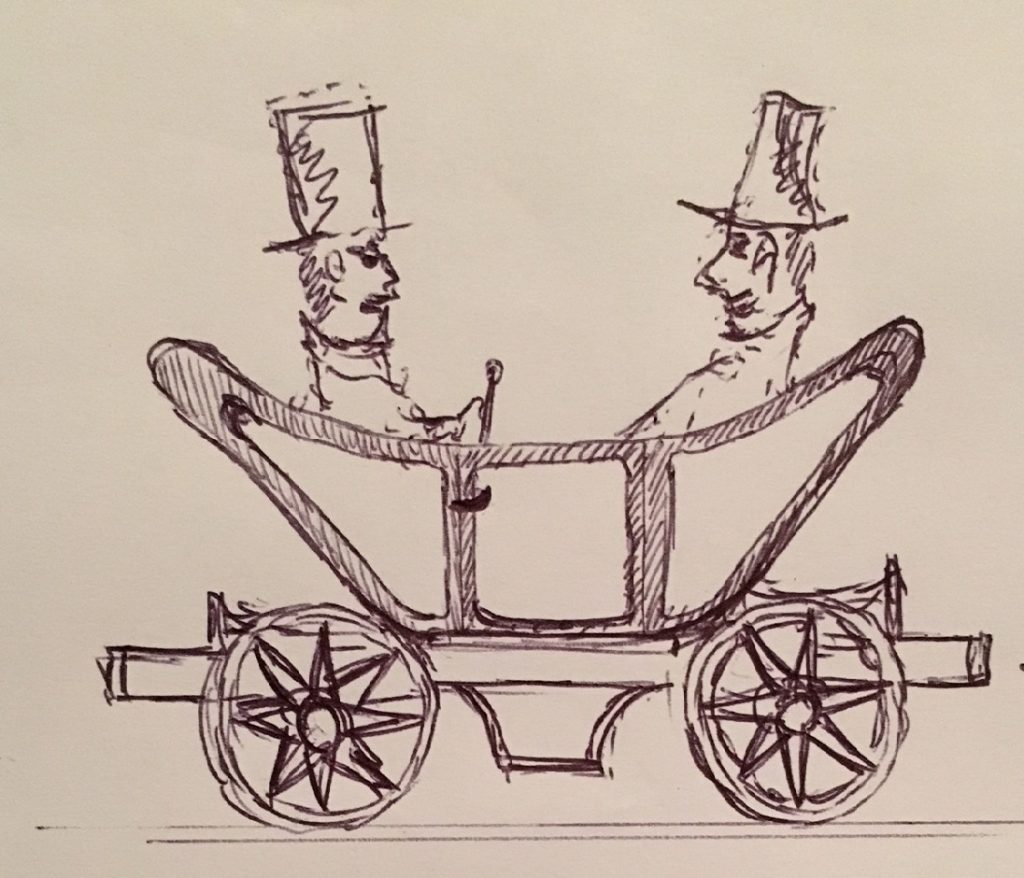