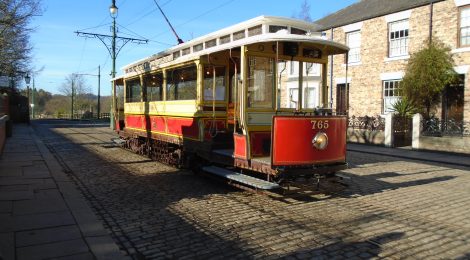 Here is the annual summary of tramcar mileages, which are a popular feature on the blog. The tramway has seen another busy season with 25,250 miles covered by the fleet. Five home fleet cars contributed the majority of this with smaller contributions by two visiting tramcars.

Manchester 765 arrived in early February, this was to allow time for some minor work to take place on the axle boxes to ensure trouble free operation whilst here. This work along with testing and commissioning work took place and then the tram entered passenger service. The tram was used in service at various events and busy weekends and completed 500 miles whilst with us before returning to Heaton Park in July.

Blackpool and Fleetwood 40 arrived in March and entered service after testing and commissioning. The main purpose of the visit was for the tram to take part in various events and then stay for the main summer season. Consequently, the tram was used occasionally up to July and then a little more intensively thereafter. The tram returned to Crich in September having completed 1250 miles whilst here.

Both visiting tramcars were popular with visitors and our tram crews. Thank you to Heaton Park Tramway and the National Tramway Museum for enabling these loans to take place.

Oporto 196 has been our lowest mileage car this season, achieving only 2,775. The low mileage is simply through low use, probably due to a combination of reasonable weather in the summer months, the availability of 16 and 264 in poor weather and the visiting cars being used in the early part of the season. 196 will come due for re-tyring during 2020 so will be withdrawn from service in the early part of the year. At this point as well as new tyres, 196 will receive a comprehensive truck overhaul and the body work will be given some attention. Work will not start until the work on Gateshead 10 is completed, so the car will still be available for the static education activities mentioned earlier.

Newcastle 114 has recorded 3,575 miles in service this year. A little lower than recent years for the car, again this is for no particular reason but the visiting cars being here and the availability of 31 with its higher capacity have probably contributed. 114 was been available for service up to the new year, and was withdrawn on the 6th January for motor overhaul. This work will be completed in the early part of the year to have the tram back in service for the main season.

Sunderland 16 has been available for service for the entire year and has put in 5,300 miles. There’s not much to add on 16, its done this trouble free. It’s the go to tram in poor weather and has a large capacity, two useful attributes which see it regularly used.

Sheffield 264 started the year by being lifted for wheelset and motor overhaul. The tram re-entered service in late April, since then it has done 5,850 miles in service. When 264 returned to service, the fleet availability (with the visiting cars) sat at a comfortable seven for a while. 264 sees use in all weathers so despite the late start to the year, its mileage has kept up with 16.

Blackpool 31 has been available for service all year round and has recorded 6,000 miles, our highest mileage for the year. In fine weather it tends to be out daily, providing a high capacity open top car. A proportion of the crews prefer bogie cars, so with 31, 765 and 40 available for a time they were spoilt for choice!

Steady progress has been made with the recommissioning of Oporto 65 over the past year. This has used some staff time and a large number of volunteer hours. The tram has been lifted to allow a thorough inspection of the truck. The tram has been rewired by the Tramway Group and is awaiting some minor body repairs prior to the overhauled controllers being refitted. David Young has assisted with various machining tasks, including the new headlamp bezels and overhaul of the trolley base. The tram is now back on its truck to allow the wiring work to continue, along with painting of the trolley gantry. Once wiring is complete the tram will be briefly tested under power in the depot yard. When 196 is lifted, 65 will also be lifted from its truck again. The two trucks are almost identical, so will be overhauled in parallel to gain economies of scale.

I had hoped that the overhaul of Gateshead 10 would have progressed significantly since the last mileage report. There is a large number of factors which have contributed to this, and every time 10 has been delayed it has been for good reason. This the reality of running a large fleet of historic vehicles (of all types) on a daily basis. We have however managed to make a little progress as time has allowed. Various pieces of contract work mean there is quite a few components ready for fitting to the trucks.  Work is now progressing to the point where the trucks can be wheeled to allow fitting of the motors and brake hangers which once completed allows brake linkage work to progress.