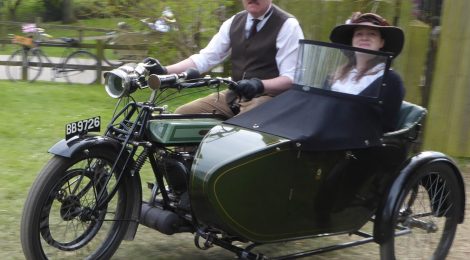 Following the success of the series on the museum’s cycle collection, we now have another guest author appearance from two Friends of Beamish engineering volunteers as Ian Reavley tells the story of the mechanical restoration element of an exhibit that has great appeal to museum visitors and Ian’s restoration colleague, Colin Goode, details the restoration of the bodwork.

After re-commissioning, the 1924 Vee-Twin Dene motorcycle in 2012, everyone who rode it praised the effortless power of the 980cc J.A.P. engine but found the handling of the long wheelbase machine rather unwieldy.  As Jonathan Hill’s research into the Dene Motor Co. indicated that these big twins were built primarily for use with a sidecar, it was decided to look for suitable sidecar for our machine.

We were fortunate in that a friend in the Vintage Motorcycle Club had a period sidecar needing a full restoration.  It turned out to be a Mills & Fulford, a make supplied by the Dene Motor Co. so ideal for the job.   Mills & Fulford was founded in Coventry by James Mills and W.H. Fulford in 1899.  The company’s trademark features a woman crossing a ford in front of a mill.  The sidecar was purchased by the Friends of Beamish for the Museum, and restoration was started by Jonathan and myself.

Initial work was to refurbish the sidecar attachment fittings, making up some parts to suit the Dene frame, so that a trial assembly could be attempted.  At this point it was realised that the existing 3-point attachment system was not rigid enough for such a large machine, and a 4th attachment between bike and sidecar would be advisable.

A yoke was machined up to fit a front engine bolt, and an adjustable link was made to go between this and a sidecar chassis tube using parts from my box of odd sidecar fittings.  This stiffened things up considerably.  The sidecar and chassis were then stripped down for remedial work to be carried out.

When the sidecar wheel was removed, it was found that the inner cup and cone bearing had been replaced at some time with a badly fitted angular contact bearing.  To rectify this, and to keep things as original as possible, a drawing was made of a suitable cup and cone, which were made for us by, the Vintage Bearing Co. of Burton on Trent.  The outer cup and cone were cleaned up and deemed suitable for further service. A new dust cover was machined from brass to suit the inner bearing.  The wheel was dismantled to plate the hub and enamel the rim, then rebuilt with new spokes and nipples supplied by Central Wheel Co. Birmingham.  A new beaded edge tyre and tube were sourced from Vintage Tyre Supplies at Beaulieu and fitted to the rim.

The sidecar body springs were cleaned and inspected, they were considered fit for re-use after new steel bushes had been made and pressed into the spring eyes for the shackle pins. Some spring shackles were missing, the others were so worn they could not be reclaimed, so new shackles were made to pattern.  New shackle pins were made up, and fitted with oilers, slotted nuts were used, so they could be secured with split pins as originally.  The shackle pin holes in the chassis frame for the front springs were badly worn, they were reclaimed by boring oversize and having steel bushes brazed in.

The original sidecar mudguard was in a rather worse state than it initially looked, having many cracks, some parts missing and having been poorly repaired in the past.  A new guard was made for us using the original for pattern by Renovation Spares of Redditch. The new guard was carefully trimmed and fitted to the original stays.

The chassis frame and painted fittings were blasted clean and stove enamelled black by a local company. Meanwhile all plated items were cleaned and polished for nickel plating by Premier Plating in Prudhoe.  There were nearly 200 items in total including the fittings for the sidecar body and `Easting’ screen.

A big help to us in ensuring chassis details were correct was the use of a photo-copied Mills & Fulford parts manual, kindly sent to Jonathan Hill by Eric Smith in the U.S.A., who owns the other 1924 Vee-Twin Dene.

Whilst work on the chassis was proceeding, we were at a bit of a loss as to how to repair the bodywork.  Fortunately, at this point, Colin Goode joined the Friends’ volunteers and agreed to take this on – Colin has all the required woodworking skills, and had already rebuilt a wooden sidecar body for his New Hudson. Colin takes up the story…

The first job was to take photographs of the sidecar body, together with measurements, to use as reference points during the restoration.

The outer skin of the sidecar was made from plywood, and the main body framework was ash.  Although the plywood was very weak, as much as possible had to be retained to use as pattern for the new outer skin.  One of the challenges was removal of the many nails that were deeply embedded in the plywood.  The best way to deal with them was to use a small cutting disc to remove the nail heads.

Once the outer plywood was removed, the ash frame was inspected to determine what could be re-used, and what would have to be replaced. Most of the frame was decayed and split with fatigue. This was removed one piece at a time and remade with new ash sections until a whole new frame was constructed with the exception of the two rear corners which were repaired by splicing new wood into the damaged areas.

The frame was re-skinned with new plywood, and new beading was made and fitted using cane, which was soaked before bending to shape on the job.

As I am a French Polisher by trade, I was looking forward to using my experience to coach enamel the completed body.  Primer and undercoat were applied by brush, this took some time to dry and was sanded back after each coat.  Once the imperfections were filled in, multiple coats of paint were applied which had been colour matched to some of the original paint on the inside of the sidecar.

After completion and painting the sidecar body was returned to the R.H.E.C. where it was gold lined by Phil Anderson, and a new, old stock Mills & Fulford transfer, which had been found after an internet search by Peter Cole, was fixed to the sidecar door by gold size.  Fitting the transfer was done with some trepidation, as it was obviously very old (and rare). There was some relief when the backing paper was soaked off to reveal a perfect transfer.

With all the chassis parts returned from the platers and painters it was put together and wheel and mudguard refitted. The chassis was fitted to the Dene motorcycle and aligned with straight edges working on the floor of the Town Garage, during which it created a lot of interest for museum visitors.

The completed sidecar body was then re-united with its chassis, again working in the Town Garage.

The`Easting’ logo was copied by Ian Bean from a period advertisement and painted just below the screen to complete the job.  Finally, the screen was fitted to the sidecar body, and secured with new `lift the dot’ and turnbuckle fasteners as originally used.

I thought that I would add a few words to Ian and Colin’s excellent article, to say what they cannot, and that is just how impressive their restoration skills and attention to detail are – the restoration of the sidecar, like all of their work and that of their colleagues in the Friends of Beamish engineering team, is of the highest order. Their work enables Beamish to do things it really couldn’t otherwise achieve, and so present elements of north east history which otherwise could have been (and often would have been) lost to the present.

Readers will be pleased to know that the team responsible for restoring and maintaining the collection at Beamish have plenty more energy and enthusiasm left in them yet! They are currently restoring the museum’s 1921 Excelsior – a machine only used for a few years before being stored and with a superb local history.  As can be seen, the petrol tank has been tackled and other components are available for the project. Hopefully Ian and his colleagues can be persuaded to write up this restoration story in due course…