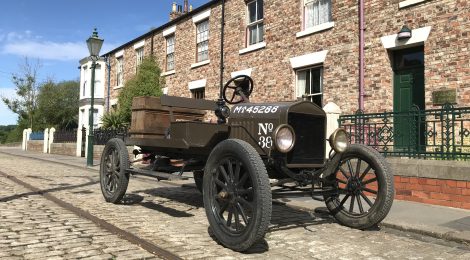 The last week or so have been particularly busy at work, so the blog’s rate of updates has suffered accordingly! The planning and preparation for eventual reopening within what will be a very different world, a new normal as many call it, is becoming increasingly detailed and extensive.

So we will have to be clever, find innovative ways to ensure the appeal of Beamish is maintained and to remind ourselves of why we are here and who we are for. There will inevitably be evolution of our ideas, and an initial limited offer should expand in time as we apply ourselves to the many operational facets that make up the museum and visitor experience. We do, of course, also have to operate at a level that generates some income for the museum and therefore has to be an appealing visit for those who come.

Earlier this week we carried out some socially distanced filming work (we really ought to be able to drop the endless prefix ‘social distance’ – it is now becoming so normal as to not really be needed) for a museum activity that you will see more of in due course. My part entailed digging the Model T Crewe Tractor out of storage and preparing it for a role. It was gratifying to note that after overnight charging of the battery and the usual walk around inspection, it fired on the first depression of the starter button.

Driving around the site, I was very aware that sharing lifts, offering a ride on the seat (sometimes a nice way to indulge a visitor’s interest in the T) or showing someone around the vehicle are all going to be things that we cannot do or have to be very careful in managing, for some time to come. Hand washing will be (as it should always be!) second nature, and maintaining a 2 metre distance will also become a new normal.

We have tended to focus on the big-ticket events, such as the Great North Steam Fair (which remains an important part of our events programme) but we also know how much pleasure is derived from seeing one or two veteran motorcycles out on site, or examples of the cycle collection. I’m sure a delivery of stone using one of our two tipper lorries in conjunction with Glyder and the narrow gauge railway would enable visitors to enjoy something they can’t readily access elsewhere. I’m also keen to see R025 out rolling the events field too!

We will certainly be taking a look at our strategic transport plan and the overhaul/maintenance queue too. Matt and his engineering team have demonstrated what can be achieved in terms of quality through the rebuild of the centre engine, and moving towards that sort of thoroughness and quality is an intrinsic part of the plan. We may, in the future (and as often reported here), not expand the operating fleet as much as we have done in the last ten years, but we will focus on reliability and durability of what we do have. Some examples of this include:

The overhaul (rebuild) of Gateshead Tram No.10 – certainly one of the most comprehensive programmes of work that we will have carried out at Beamish on a tramcar, and which is also incorporating sensible modifications (discreetly) that will make maintenance easier and hopefully extend the future working life of this tram.

The overhaul of Steam Elephant – again incorporating some modifications in light of experience with this locomotive over the past decade and a half.

The reconstruction of the Model T Ton Truck – the work on the Crewe Tractor has shown the benefits of a comprehensive rebuild and incorporation of redesigned components where this is sensible – for instance the sealed-for-life wheel bearings and electronic ignition. We wouldn’t apply these to a curatorial restoration or overhaul, but for a vehicle that needs to start every morning, every time, they are are outwardly invisible and ensure that the visitors see these vehicles at work as much as possible (the Model T Ton Truck will be allocated to the engineering team once completed).

Kerr Stuart 721 – one of the apprentice projects and with the skills within the engineering team that we have, there is no need not to do a thorough job!

Austin 10 – this has had a thorough mechanical overhaul and no end of body work replaced (all of the curvy tricky bits that seem to rust first!). It will be turned out in due course with new carpet trim and new paintwork – and also (importantly) restrictions on use to ensure it lasts and is available for when we need it…

We also have the external contracts, albeit now delayed due to COVID-19, namely Dunrobin and Crosville 716 – both of these are being done to the highest standard and hopefully will endure for decades to come, in operation at the museum.

So with this sort of ethos, we may look to reduce the number of period vehicles we have in the ‘common user pool’ (most of which are now out of use awaiting repairs) such as the Wolseley car and Bedford CA ambulance. We now know that period pool vehicles do not work for us, but allocating well maintained period vehicles to a single user works very well – the electricians extract a great deal of work from the Commer van (awaiting repairs needed due to age not use/abuse) and the Morris Commercial, due to taking care of them and restricting the operators of them.

We will also continue to have the nice-to-haves – the Dodge bus being an example of this and which, in due course, should become a useful and usable member of the bus fleet as well as an interesting restoration challenge for the Friends of Beamish engineering team.

These are mainly musings, for now, but they will help inform the future and the current strategic plan will be adapted to cope with the challenges of the future.

The motivation, however, remains the same. As do those objectives set for ourselves. The means of achieving this will inevitably have to adapt and it will be interesting to compare notes with the wider sector (both museums and heritage railways, the latter being that with which we have most in common in this team) as the challenges are faced and met. There are going to be lots of ways to support this and blog readers will start to see the museum’s social media revealing how this can be accomplished, shortly.

Please do support us – by engaging with the museum virtually or by visiting (and spending money with us!) when it is safe for us to reopen. 95% of what we spend comes from what we earn at the gate and through the tills – this is the reality of being an independent museum and we have certainly enjoyed this independence when it comes to creating exciting and vivid projects – looking back through the blog over the last 10 years or so reveals just how much can be done as an independent museum and this is something of which we are very proud.

I will finish my monologue here as readers will no doubt want to see some photographs! So here are a few photos of the Crewe Tractor in the sunshine between ‘takes’ during the recent in-house filming work…

With restrictions easing a little, but still mindful of the need to socially distance from others, a quick trip was made to Groverake Mine, west of Rookhope (and to the north of Weardale) to scratch an itch regarding something read about and which I thought that I could see on Google Earth – namely the shape of a narrow gauge engine shed, long abandoned, on the mineral tramway once worked by 2 ft. 6 in. gauge Black Hawthorn 0-4-0ST locomotive.

Lead mining in Weardale has marked the landscape throughout the dale, but Groverake Mine is probably one of the most striking remnants of the industry, due to the operation of the mine until 1999 for the extraction of flourspar and the survival of one of the headstocks latterly in use on the site.

W. B. Lead, owned by the Blackett-Beaumont family, was one of two principle lead mining businesses in the area (the other being the London Lead Company – operators of the Cornish Hush mine where the inspiration for our replica of 0-4-0WTG Samson worked), owning around a third of the mines from the seventeenth century until, in the case of W. B. Lead, the interests were sold and dispersed in the 1870s, with the Weardale Lead Company Ltd being formed to take over the W. B. Lead interests from 1883.

Groverake was served by two railways – the standard gauge branch of the Weatherhill & Rookhope Railway (owned by the Weardale Iron Company) and the narrow gauge railway built by the Lead Company to link the mine at Groverake with a washing plant at Ripsey Mill around a mile to the east. Along the route it also served a mine at Wolfcleaugh, the latter closing in 1912. Steam haulage was used on this tramway between 1889 and 1909, though the tramway was in use after this date, presumably using horses as motive power.

Groverake was to become the leading producer of flourspar in the ore field and was owned and developed by various operators until the last, Sherburn Minerals, closed the operation in 1999. Flourspar is a source of hydrogen flouride, used as a flux for lowering the melting point of raw materials in the manufacture of steel and also has manufacturing applications in the production of aluminium, glass, enamels and also for cooking utensils.